What are the basics of keeping a low profile? 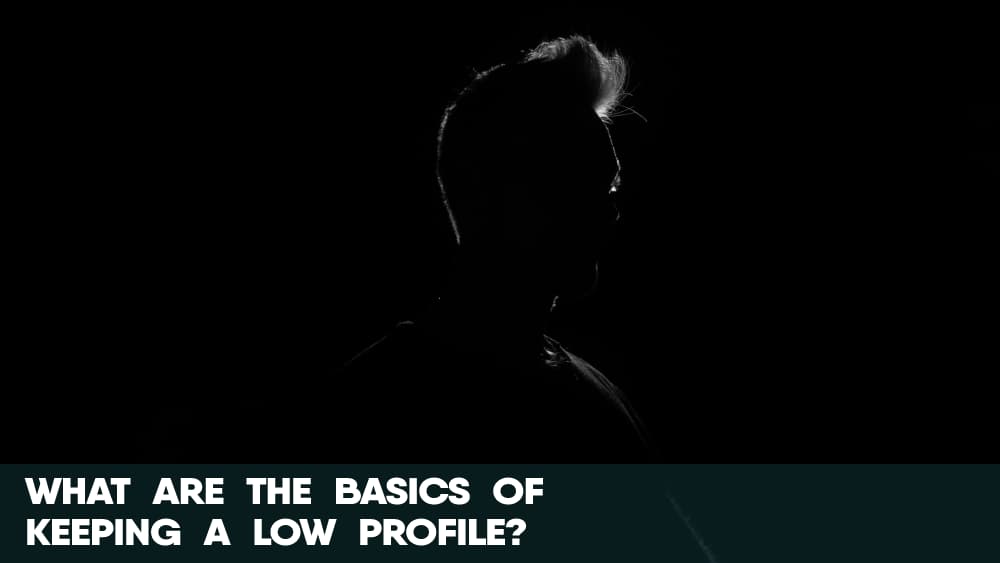 In any war, intelligence--information about the enemy--lays the groundwork for attack. So, the less police know about growers the better. Law enforcement collects most of the information about the enemy from the enemy. By controlling their activities and surroundings, growers minimize what law enforcement knows about them and the accompanying aftermath. Your activities--where you go, how you go there, what you buy, how you pay for it, who you talk to, what you say--are all things you can control. Your surroundings--your home, growroom, outside property, electrical use, air quality, and visitors--are also parts of your environment that you are able to control.

Never trust anybody, not friends, not family, not even your own children or mother! US conspiracy laws make it possible to jail victims for what they say or what is said about them. America reminds me of Cuba is this regard. A few years ago while visiting the forbidden island, I was amazed to find so many parallels between Cuba and the United States. One of the most striking similarities the two countries share is the fact that what you say or what is said about you can land you in jail!

The Judge continued: "A defendant's knowledge of and participation in a conspiracy may be inferred from circumstantial evidence and from evidence of the defendant's action. Acts which seem otherwise innocent, when viewed in the context of the surrounding circumstances, may justify an inference of complicity."

The most dangerous places to visit or telephone include other growrooms, stores that cater to indoor gardeners, and anywhere illegal drugs are being used. Although very tempting, avoid visiting other growrooms. You never know when or how they are being monitored by law enforcement. Your presence at another growroom could tie you to it. Testimony by the grower could implicate you and your grow operation even if they've never been to your garden!

Using your telephone is an obvious no-no! Technology today makes tracking telephone numbers and their locations very easy. Use a pay telephone to make calls when it involves a garden. A case involving a police department that subpoenaed telephone company records of a garden store is currently being heard in federal court. Phone records showed the telephone numbers that were used to call the store. Narcs tracked these numbers down and watched the homes where they were located. More than 1000 arrests resulted! Was the police action legal? The courts are determining that now. Meanwhile, a thousand POWs were taken over a four-year period. Who knows how many police stations are using these same tactics?

Stories abound about narcs watching garden-store parking lots and following clients home. You never know when law enforcement will bring the battlefield to the parking lot. Assume they are there. If you must go to a dangerous place, do not go there regularly and do not drive your own car. Take public transportation or go in a car not registered to you or anybody in your family.

Cash tells no tales and leaves no trails. Pay for all purchases relating to the growroom in cash. If you must order something by mail or UPS, pay with a money order that was purchased in cash. Avoid the convenience of using a credit card. Even if it's someone else's, you immediately become a bargaining chip for them if they have any legal problems.

Do not take photos of your garden that show incriminating evidence such as peoples faces, tattoos or anything traceable, such as telephone or license-plate numbers, addresses on a letter, etc. When taking photographs to be developed, do not list your telephone number or address on the receipt. Pay for the photos in cash and do not drive your car to the store.

If you live in the United States, never, never, ever show your growroom to anybody! Do not tell anybody you are growing or have ever grown! Always deny growing. Such information in the hands of someone else renders you powerless. The word "friend" rolls off the tongue so easily until the "friend" is interrogated by law enforcement. Two of the major weapons cops have in their arsenal are deception and intimidation. They lie and intimidate petrified growers to extort information from them.

When a grower is arrested, they are interrogated--not like in the movies, but for real. The interrogation is not over one or two sessions. It often goes on for months. During this time, the accused (without being proved guilty) is coerced into providing information about other growers. Even if they do not know anything about those growers, they are pressured to make up information so the police can use this erroneous information to secure search warrants. Guilt by association has blindsided more than one grower.
A jealous, spiteful or vindictive friend, lover or enemy has complete control over you and your future if they know you are growing. Imagine, just on the whim of a snitch, your life can be changed forever. I met a grower who was cultivating marijuana as medicine to ease the side effects of chemotherapy he was receiving. His vindictive daughter forced him to grow a bigger crop than he needed, sell the excess and pay her the proceeds in exchange for not ratting him out. I could feel the pain in the poor man's words when he told me the story.

Once law enforcement has stumbled across evidence, received solicited evidence from spiteful snitches or coerced evidence from freaked-out friends trying to save themselves, they go out and look for information by subpoena, phone records, electric records, shopping records, etc., and then deploy more sophisticated snoop tactics, most often dogs trained to sniff marijuana.

All that I've got to say is have a lawyer, be prepared. Cops are sneaky, be sneakier. Get a big dog, and have a secured property. Make sure that no one can get in unless you let them in, including cops. Be safe brothers and sisters, and Overgrow the Governments!
Click to expand...
Reactions: Green_acres_816, Adder, GeorgeA and 28 others

Very interesting, especially if I were growing where it had not been legalized. I have a close friend who's a cop here and he said that legalization is the best thing as they are no longer allowed to use the smell of weed as grounds for search/seizure. He says that now that weed is off the enforcement table, he can concentrate on impaired drivers and insurance scofflaws.

Until last month, I was growing two plants more than the legal limit and he couldn't look at my grow. Now that we're legal with up to six plants, he is allowed to look!

I worry more about someone deciding to steal my pitiful stash, but I store mine away from home. Thank you for all the details!
Upvote 0 Downvote

I always said that if you do a crime or something illegal tell not a muthafucking soul. You'll be surprised how much people you know and are cool with would rat you out. TELL NO ONE!
Upvote 0 Downvote

People tend to use too much social messaging these days and to be honest it is very incompatible with growing; even in a legal State as it opens up the possibility of burglary or worse.

If you care about your safety: keep it off Facebook. Good article!
Upvote 0 Downvote
Read more…
Top Bottom