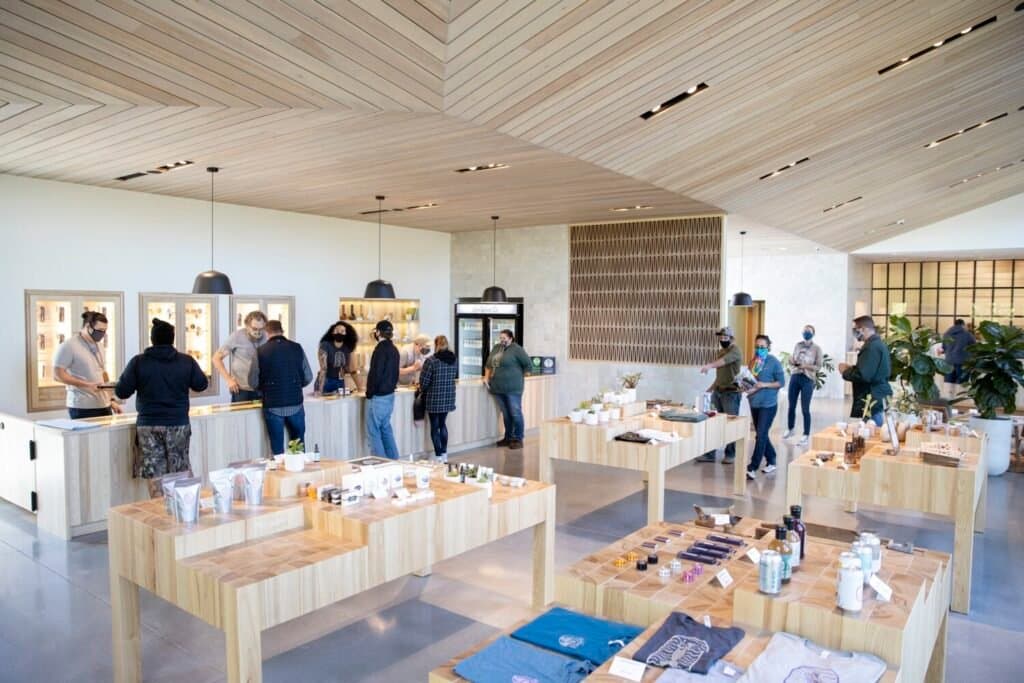 After a four-year wait, Mainers can finally buy legal marijuana for the sole purpose of getting high.

That is something that Dan Comeau, a 46-year-old Portland resident, has been waiting almost 20 years to do. He and a friend took the day off from work and got dressed up – he in a suede blazer and she in a velvet minidress – to buy adult-use cannabis from SeaWeed Co. in South Portland on Friday, the first day of legal recreational sales in Maine.

“There’s a freedom about it,” said Comeau, who was one of about 50 people waiting in a noontime line to get inside the stand-alone shop. “I don’t have to hide it. I don’t have to talk a doctor into a medical card. Now I can buy local weed from a local shop just because it’s my birthday, because I feel like it. That’s a real gift. It’s also been a really long time coming.”

It has taken almost four years to move from referendum to retail sales since Mainers narrowly approved legalization of recreational cannabis at the ballot box in 2016. Legislative rewrites, gubernatorial vetoes, a change in state administration and then the impact of the COVID-19 pandemic have combined to make Maine’s rollout the slowest in U.S. history.

As opening day dawned, however, it became clear that some customers would have to wait a little longer. Long lines formed at SeaWeed, Firestorm Cultivation in Bangor and Theory Wellness in South Portland. In Bangor, customers waited outdoors in a gated S-shaped queue. In South Portland, Theory customers nibbled on food from the nearby Five Guys.

At SeaWeed, owner Scott Howard tried to create a party-like atmosphere, inviting Greeks on Peaks and Maine Maple Creemee Co. to sell food truck gyros and apple crisps in the parking lot, and musician Kyle Friday to “lay down a vibe” on the back deck. A self-described marijuana enthusiast wearing angel wings handed out cookies and balloon animals.

“We’ve been waiting four years and then some,” Comeau said. “I’ll wait another hour to celebrate this freedom. It’s pretty fun.”

Eight shops are now licensed to sell recreational cannabis, but a shortage of legally tagged, tested and taxed adult-use cannabis means only six opened Friday. Due to a limited supply and selection, the first-wave adult-use retailers that did open enacted initial purchase limits well below the state’s 2.5-ounce daily limit on flower, or smokable bud.

The cost of an eighth of an ounce of flower ran between $55 to $65. While that is lower than the Massachusetts adult-use market, it can be two times what patients pay at a typical medical shop. For example, an eighth of Mimosa, a popular mood-lifting hybrid strain, costs $65 at an adult-use retailer. At a nearby medical shop, that buys you a quarter, or twice as much.

But adult-use retailers expect the price to fall as more adult-use growers get their licenses. More than 100 growers are awaiting a final state review, with some planning tiny boutique cannabis grows and others geared up to open cavernous cultivation facilities. As those come on line, retailers won’t have to use double-taxed medical plants to fill in their recreational supply gaps.

Licensing more independent labs may reduce testing costs, too, and speed up turnaround time. Maine currently has one adult-use lab.

One of the stores that opened Friday is Theory Wellness, owned and operated by four people – two Mainers who have remained in the background of the company and two Colby College alumni who live in Massachusetts and act as Theory’s public liaison. Locals have targeted them as out-of-state carpetbaggers and staged an opening day protest on Friday.

Dawson Julia, a medical marijuana caregiver who owns a shop in Unity, said Theory Wellness’s plan to use profits earned at their four Massachusetts marijuana stores to subsidize their Maine recreational prices will hurt Maine-owned businesses like SeaWeed, which is just down the road. He accused Theory of trying to drive SeaWeed and other local retailers out of business.

“Keep the corporate corruption out of Maine and let’s keep it all local folks,” Julia shouted at cars pulling into the Mallside Plaza where Theory Wellness is located. Julia was one of a dozen medical caregivers and patients picketing the sidewalk outside of the plaza. “These guys are not our friends. They’re here to eat our lunch.”

But Thomas Winstanley, Theory’s marketing manager, said the founders want to subsidize Maine prices now, when the supply delays have driven up wholesale costs and forced retailers to use double-taxed medical marijuana, to avoid driving Mainers used to lower medical prices away from the recreational market. It’s about the customer, not the competition, he said.

Erin Carr and Jackson Bickford of Rochester, N.H., made the drive up from their Kennebunk hotel to participate in opening day. They like the idea of keeping marijuana local, but coming from a legalization holdout state, they are just happy to shop for marijuana anywhere. They chose to shop at Theory Wellness because it was closest and opened first, they said.

In addition to Firestorm, SeaWeed and Theory Wellness, adults flocked to the three other licensed retailers who decided to open: Green Cures in Auburn, Northland Botanicals in Stratton and Sweet Relief Shop in Northport. Two stores have been licensed but didn’t open Friday: House of Ganja in Newry and Coastal Cannabis Co. in Damariscotta.

Sweet Relief owner John Lorenz closed his first recreational sale Friday with a supportive local selectman, but sold out of his limited supply of pre-rolled joints by end of the day. He doesn’t know when he will be resupplied. He has an application pending for a state recreational grow license, but until then, he must rely on wholesalers for product.

“I will not buy overpriced goods and schlep them forward,” said Lorenz, noting that several wholesalers whom he had deals with for opening day supply walked out on him when other licensed adult-use operations offered more money. “It’s unfair. I have been a medical grower for five years and that’s not how you do it.”

Almost all of the first wave of licensed adult-use businesses had trouble finding product, even with as much as a month to do it. Tonya Rollins had a single day to negotiate the deals needed to open her Auburn shop, Green Cures, on Friday, but she struck last-minute supply deals with licensed wholesale growers in Detroit and Auburn to make it happen.

This makes Rollins’ shop the only licensed retail shop in Maine owned and operated by a woman, which hasn’t been easy in this male-dominated industry, Rollins said. She has had to work longer, harder and smarter to compete with the boys. She stayed at her shop last night, sleeping an hour or two on the floor, to make the opening possible, going home only for a quick shower.

“Cannabis saved my life,” Rollins said. “I had a tough go of it when I was young. Foster care. PTSD. My doctor had me on all of these pills. When I turned 16, I emancipated myself, started smoking pot and got off all the pills. It’s not been easy. Three years ago, I was living in a shelter. Now I’m running my own business, helping people get access to what helped me. It’s a bit surreal.”

As a result of the hard work and grit, Rollins made Maine history on Friday by conducting the first adult-use sale in Maine. She sold an eighth of an ounce of Alaskan Thunder to her friend, Nate Howard, a local tattoo artist, a few minutes after 7 a.m. At $65 an eighth, he knew it would be pricier than he’s used to, but he wanted to show his support for his friend and the new market.

“I have friends locked up just for having pot on them, not even large amounts,” Howard said. “The idea that I could walk into a store free and clear and buy some weed and carry on with my day was kinda great. It feels like America, like freedom. Exciting. Was great to hang out and celebrate. We got this legalized. The fight has finally come to an end and we won.”