Dabs are a popular way of consuming marijuana concentrates.

There are many different ways to consume cannabis, but there’s a new trend that’s starting to take over. It’s called dabbing, and in some places it’s now even more common than smoking or vaporizing.

Dabbing might sound like something you do to clean a stain on the carpet, but it’s actually a way of consuming marijuana that provides a heavy dose of active ingredients in a small package.

Dabbing is more similar to vaporizing than it is to smoking, but the whole concept can be quite confusing for those just starting out. Lucky for you, here’s a rundown on everything you need to know about dabs and how to use them.

Dabs are a type of marijuana extract that users vaporize to get high. There are many different types of dabs available today, but the most common ones are shatter, wax, budder, crumble, and butane hash oil (BHO).

The main difference between these dab products is the method used to make them.

“There are a lot of differences with how they’re made and which solvent you’re going to use in making the extract,” says Josh Medows, extraction technician at Best Value Vacs, a company which sells equipment for producing dabs.

“As far as shatter or wax goes, it really just depends on the procedure that you use to produce the extract. You can actually turn a shattery-type consistency into a wax by a process called emulsification, which a lot of people refer to as whipping.”

One reason why dabs are so popular is because they contain much higher concentrations of THC than buds do. Some extracts can contain as much as 70-90% THC.

“Dabbing” refers to a method of smoking concentrates that involves the use of special equipment, also known as a dab rig. A dab rig resembles a glass bong, only instead of a bowl it has a nail which must be heated up, usually with a handheld torch.

Once the nail is hot enough, a dab tool is used to pick up a small piece of concentrate. The concentrate is then placed on the nail, and the user inhales as it burns. The extract should instantly vaporize and produce a strong and smooth hit.

Compared to smoking, dabbing provides quicker and more efficient delivery of THC into the body.

How Are Dabs Made?

There are several methods used to make dabs. The type of extract you end up with depends on the extraction method.

Cold water extraction with bubble bags is the oldest method, and is mainly used to make hash. The rosin method is the latest one making waves, and it involves using heat and pressure with no solvents. Supercritical CO2 is another method, but the equipment is very expensive, making it unlikely that you’d do it at home.

Today, the most popular method for making dabs is butane extraction.

“With butane extraction, no matter what method you’re using, you’re going to either soak or pass butane through the material,” explains Josh Medows from Best Value Vacs.

“What that does is it pulls out all the THC and the terpenes, and even in some cases it’s going to pull out fats and lipids, basically what they refer to as waxes, from the material.”

Professional vendors make their extracts in a laboratory using closed-loop extraction. In a closed-loop system the entire process is sealed and contained, so no volatile gases can escape. This method is safe and produces high-quality concentrates.

The method that most people use at home is called open-loop extraction. This process of making dabs is very dangerous. In an open-loop system, the extraction rig is not completely sealed so volatile gases can leak out and accumulate in the air, which can lead to accidental explosions. 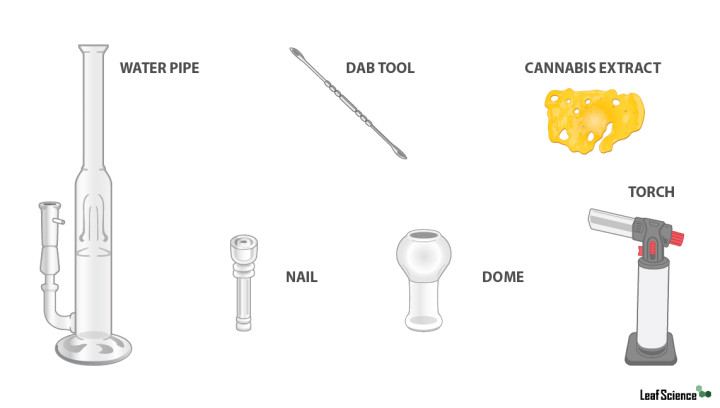 While there are a variety of tools and devices you can use for dabbing, a typical dab rig consists of a water pipe, nail, dome, torch, and dab tool.

The water pipe can be any marijuana bong converted into a dab rig using the necessary parts. You can also buy dab rigs that are specifically designed for dabbing, but these can get expensive.

The nail is the part which you heat up with the torch to vaporize the extract. It’s placed in the same spot where the bowl would go in a water pipe. You can buy nails in a variety of different materials (glass, ceramic, quartz, or titanium), but the best ones are usually quartz or titanium.

You can also find electronic nails, but they are less common and can cost up to $300. The advantage of an e-nail is that you don’t need to use a hand torch to heat it up.

The dome is an additional piece that goes over the nail. It’s just there to trap the vapor while you’re dabbing. Domes aren’t always necessary, however. You may be able to do without one if you have the right type of nail in your rig.

The torch is a handheld propane torch. For this, the most popular option with most users is a creme brulee torch. It’s compact, and easily ignites with the pull of a trigger.

The dab tool, also called a wand, is a stainless steel utensil that resembles the pick that your dentist uses to scrape plaque off your teeth. You use it to pick up a small piece of extract and dab it on the hot nail. There are many types of dab tools out there, the difference between them being the shape on the end.

There are many reasons why someone might prefer dabs over other methods of consuming marijuana. A 2014 study which surveyed 357 people about why they prefer dabs revealed the following benefits:


Compared to other methods of consumption, dabs provide a much smoother and cleaner taste. It takes effect immediately and lasts much longer than traditional smoking methods.

For medicinal users, dabbing can provide the correct dosage of cannabinoids quickly and effectively. In the same study, some people also reported that dabs were more effective for pain relief.

Risks and Side Effects

Dabbing is still relatively new, so there isn’t a lot of science out there regarding its safety and long term effects. But thanks to its rising popularity, a few studies have come out in recent years and have brought up several risks and concerns.

Overdosing is possible
There is a real possibility of overdosing on dabs because of their extreme potency. While no one has ever died from dabbing or marijuana in general, it is very easy to consume too much at once when dabbing.
Common symptoms of an overdose include vomiting, paranoia, confusion, panic attacks, accelerated heart rate, and passing out. There is also a risk of accidental injury if an overdose occurs.

Marijuana withdrawal might not be as serious as withdrawal from other drugs, but it can still be unpleasant. Symptoms of withdrawal include insomnia, depression, headaches, mood swings, vivid dreams, and night sweats.

Excess chemical contaminants
A common concern is that dabs may contain traces of chemicals left over from the extraction process. If the solvent is not completely purged during extraction, you could end up inhaling traces of butane and other chemicals used when making dabs.

The fear of inhaling chemical contaminants when dabbing is generally overblown. If inhaled, butane can be a minor lung irritant but is not a serious health threat. What’s more, any residual butane is usually burned off during the dabbing process and should pose no risk to the user.

Still, if you take a dab and the extract sizzles a lot, that’s a sign there is a lot of excess butane left over and you might want to consider buying your dabs from a different source.

Home extraction is unsafe
There have been several cases where homemade extraction labs have exploded. Many of these stories have been covered by the media and have led to a widespread fear of dabbing in general.

It’s easy to understand why dab enthusiasts might want to make extracts at home: the extraction process isn’t overly complicated, and all the necessary equipment can be bought at a hardware store for a relatively low price.

However, people usually rely on open-loop extraction at home because they don’t have access to the more expensive closed-loop equipment used in professional labs. With an open loop, volatile butane gas can easily escape and accumulate in the room and all it takes is one small spark to cause an explosion.

How to Dab Safely

If you want to get into dabbing, there are several things to keep in mind to help minimize any risks.

You’ll also need a dab rig, so visit your local headshop and take a look at what options are available. They should be happy to answer whatever questions you may have and set you up with the proper dabbing equipment. There are several items to purchase, so be prepared to spend a few hundred dollars for a complete rig.

Last of all, be very careful with how much you consume. Concentrates should not be taken lightly and you don’t want to make the mistake of consuming too much. Start small and work your way up to a dose that’s comfortable for you. If you don’t have a scale, you should definitely invest in one because even a fraction of a gram can be too much.

Dabbing can be safe as long as it’s done with the right gear and you carefully monitor your dosage.