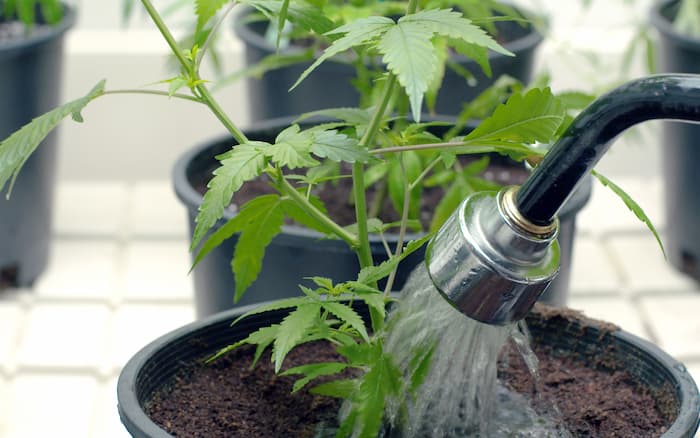 How much water does a cannabis operation use? It’s a straightforward question but getting at the answer isn’t. That would require data, and data for a substance that is still classified as a Schedule I drug by the federal government is often hard to come by.

“If you do some research, there's usually one statistic that is cited, and it's from basically a hypothetical model that was based on an illicit market outdoor production scenario. It quotes a rate of 6 gallons per plant per day,” said Derek Smith, executive director of the Resource Innovation Institute (RII), a nonprofit that promotes energy efficiency for cannabis growers.

Smith said that often-cited figure is unequivocally high. And how does he know that? Because in April 2020, the RII formed the Water Working Group, made up of experts from multiple fields, to gain a better understanding of cannabis water use and how geographies and cultivation methods impact usage rates. The experts included cultivators, researchers, utility officials and members of regulatory agencies.

The group, along with partners New Frontier Data and the Berkeley Cannabis Research Center, set out to create the Cannabis Water Report, a document that will establish a scientific understanding of how, and how much, water is used for cannabis cultivation.

RII officials said the report will provide cultivators with insights, clarity and strategic recommendations for how to be more water-efficient, and ensure industry leaders, governments and media are accurately informed about the range of water practices in the cannabis market.

“Though growing cannabis can involve a lot of the same horticultural supplies and inputs as other commercial crops, there is no industry water usage data that accurately translates to cannabis,” said greenhouse consultant Rob Eddy. “Normally this might also be provided by the universities as a part of their Extension mission, but that will have to wait until it is federally legal. Without that kind of support, RII has provided cultivators with non-biased information for the first time.”

To get the data they needed to gain these insights, the researchers leveraged RII’s Cannabis PowerScore, a free energy, water and waste benchmarking platform for cultivators. According to Smith, PowerScore helps growers understand key performance indicators from both a square-footage and production standpoint. Cultivators can also compare their performance to that of other similar-sized operations in terms of water and energy usage.

“The platform also has an aggregate reporting system so we’re helping inform governments, utilities standards organization, anybody that’s looking at indoor agriculture and trying to understand how to support its transition to more efficient models,” Smith said.

Regulators like the Massachusetts Cannabis Control Commission specify PowerScore as an approved means of reporting energy and water performance.

The RII’s Water Group has analyzed this data and made it available to other researchers for peer review. Smith gave a preview of the report’s findings at MJBizCon’s 2020 Associations Day on Tuesday, Dec. 1.

“We live in an era of climate change where droughts are increasingly common,” Smith said. “A significant portion of cannabis cultivation is located in Western states, which will continue to be affected by water scarcity. It has never been more important to understand how our industry can improve efficiency.”

That efficiency becomes even more important as the cannabis market expands rapidly. With the addition of the five states that legalized in November, the legal U.S. cannabis industry is expected to grow at a compound annual growth rate of 21% through 2025, according to New Frontier Data. Researchers estimate the legal cannabis industry will hit $41.5 billion in 2025. That’s compared to a $13.2 billion legal market in 2019. The illicit market is expected to decline from $66 billion in 2019 to $64 billion in 2025.

During that same time, researchers expect the total water use in the legal cannabis market to increase by 86%.

“A portion of our research was focused on understanding why cannabis had received such notoriety as a water-intensive crop,” said Christopher Dillis, postdoctoral researcher at the Berkeley Cannabis Research Center. “We need to educate people about what is happening now in the legal industry and separate that from the old narrative around the illicit industry. The report reveals that water use practices are highly diverse in the new regulated cannabis industry, and we hope that this new data leads to well-tailored regulatory policies that are responsive to this diversity.”

The report makes clear that it’s nearly impossible to normalize water usage per plant because it can vary so widely based upon factors like location and growing techniques. Because of this, the researchers recommend that evaluation of future cannabis water efficiency be based upon canopy square footage, not plant count as it has in the past.

The disparity among operations is something Don and Chad Watson of Watson Well can affirm . Watson Well provides water treatment and water system solutions to commercial farmers, including cannabis cultivators.

Watson Well uses online forms, consultations and site visits to help tailor water solutions to the specific needs of its customers. Don Watson said they see two main trends among cultivators. First, growers often don’t know the constituents of the water they use — whether it has harsh metals or arsenic that could affect the product or fail regulatory guidelines. The other has to do with consumption.

RII’s full water report is scheduled to be released in February, and Eddy said it will especially help growers with facility design.

“Most cultivators are well-versed in growing either indoors, in the field or in the greenhouse, but not all three. As they expand into one of the other areas, their water demands, as well as their conservation challenges, change,” he said. “The importance cannot be understated. I often have preached to horticulture students that the first task of building a growth facility is to test water quality and ensure you have adequate supply.”

@bio: Daniel Gaddy is editor of Water Technology. With a bachelor's and master’s degree in journalism from the University of Alabama, Gaddy spent 10 years as a reporter and editor for community newspapers in Alabama before joining Water Technology’s parent company, Endeavor Business Media.