The United States of Cannabis 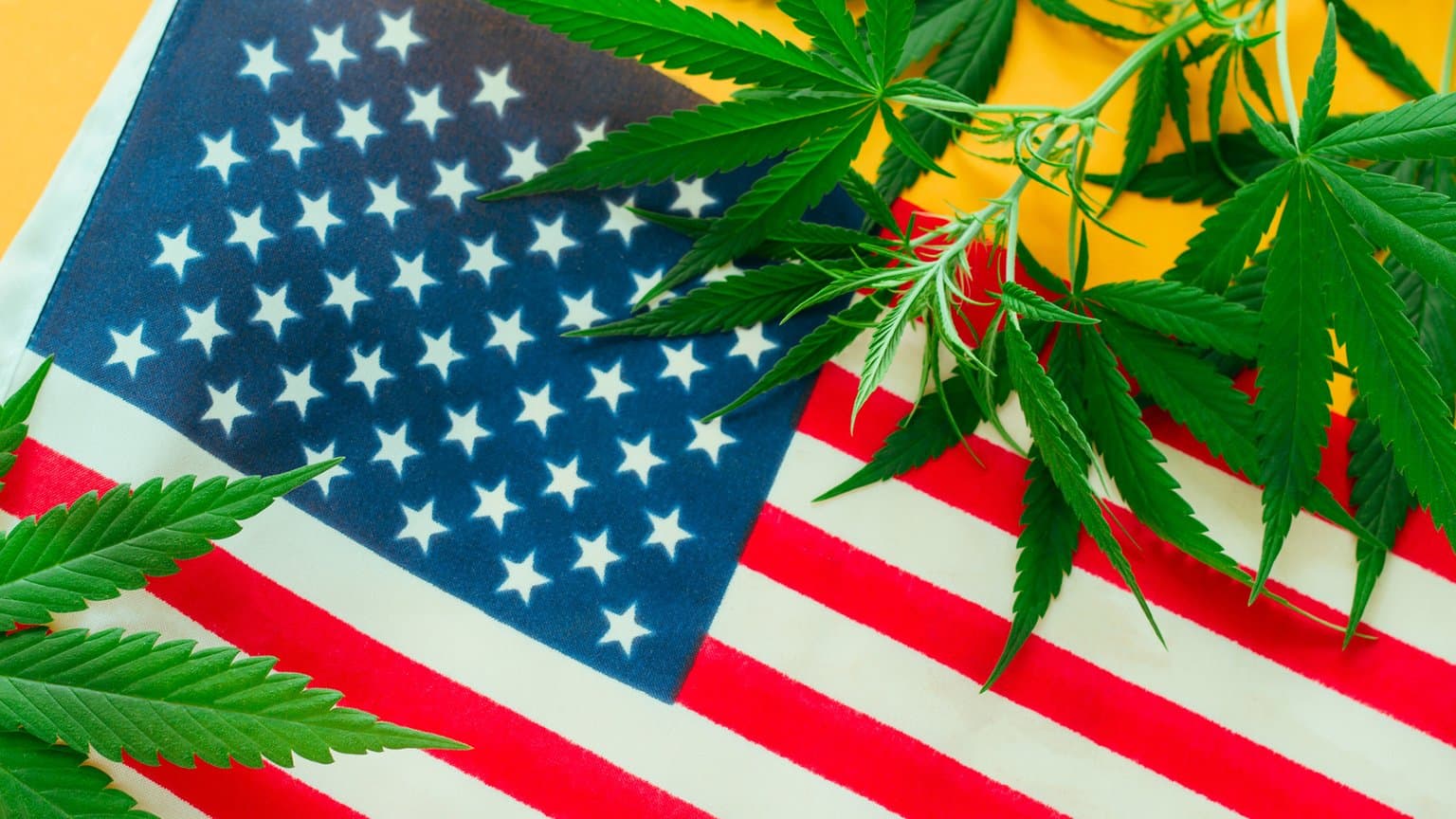 "New Jersey was the tipping point and when New York and Pennsylvania go recreational, 80% of the U.S population will have access to adult-use cannabis." Boris Jordan, Chairman, Curaleaf

The November 3 U.S election victories were decisive and absolute. The American people cleared their throats and spoke loudly: They want a legal and regulated cannabis marketplace, and they want it now. It was a historic night for the once-beleaguered industry, and it made for a definitive statement on the world stage: The long and misguided War on Drugs is coming to an end.

The clean sweep across New Jersey (adult-use), Arizona (adult-use), Montana (adult-use), South Dakota (adult-use and medical) and Mississippi (medical use) was as lopsided as it was decisive. In all, more than sixteen million new customers will be added to the total addressable market (TAM) and soon, one-in-three Americans, or 109 million people, will live in a state where adult-use cannabis is legal.

At the federal level, the specter of a friendlier and more pragmatic Biden administration helped to fuel sentiment that regulatory change is afoot, and the addition of senators from traditionally conservative states should help facilitate the passage of SAFE Banking, and potentially more. Importantly, the Senate majority and the fate of a blue wave will be decided during Georgia’s two seat run-off in January.

As those remaining balance of powers take shape in Washington, the U.S cannabis industry is poised to prosper. Cowen analyst Vivien Azer raised her total cannabis market projection to $34 billion by 2025 and that’s before the east coast dominos tumble. To wit, the governors from New York, Pennsylvania Rhode Island, Connecticut and Virginia have begun posturing for adult-use cannabis in 2021. 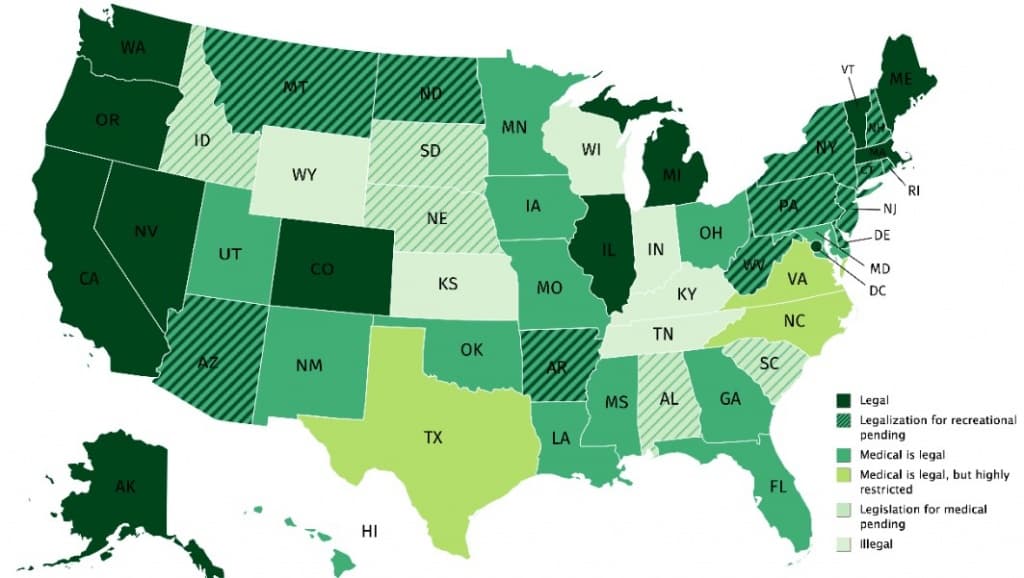 We discussed the set-up into the election and how fast money was betting on the outcome and smart money was focused on the fundamentals. As pundits begin to debate how the fate of the Senate will impact the legislative path, and whether U.S operators will have a few more years to build their moat before increased competition arrives, the prospects for the industry have perhaps never been better.

Setting the Table
During my 30 years as an investor, I’ve found that four primary metrics often determine the fate of an investment. Each is akin to a leg under a table and when all four are firmly in place, the odds of a successful outcome increase in kind. Let’s take a look at the current U.S cannabis landscape through these four unique lenses:

Fundamentals
We recently discussed The FANGification of U.S Cannabis and the chasm between the Haves and the Have-nots. Green Thumb Industries has already secured it’s standing as one of those four horsemen after crushing their third quarter estimates; despite the pandemic and onerous tax treatment, with no access to capital markets or commercial banking; and listed on the pink-sheets. It just doesn’t matter.

We expect similar smashes when Curaleaf, Cresco, and Trulieve report this week as other capable operators attempt to ascend the MSO totem pole; and who can blame them? Despite the artificial impediments we so often discuss, U.S multi-state operator (MSO) valuations are in the bottom-third of all industries groups, while sporting the highest revenue growth of any industry.

As the great debate rages on Wall Street about value vs. growth, “growth at value” has now emerged in the U.S cannabis industry for those willing to pay attention and suspend judgment. Matt McGinley, the keen-eyed analyst at Needham & Co., summed up the opportunity nicely in the nifty graphic below, as part of his must-read primer on the space. 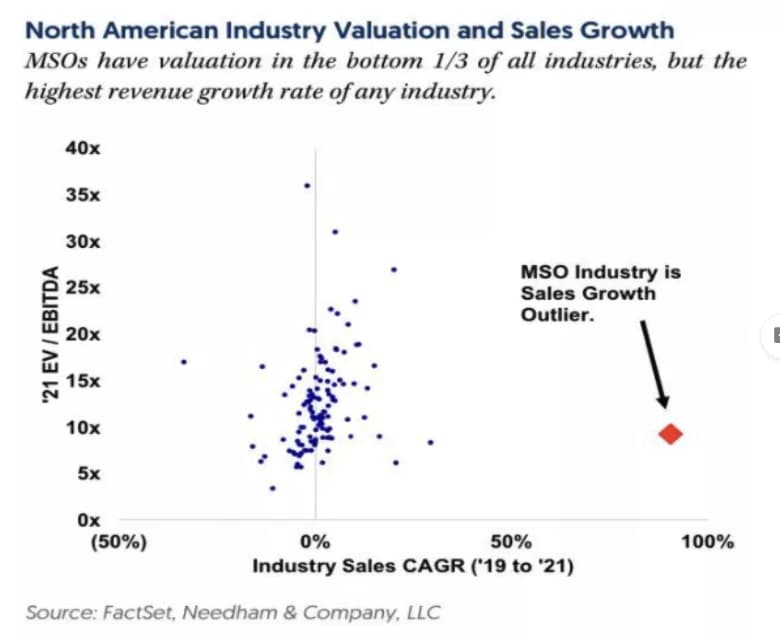 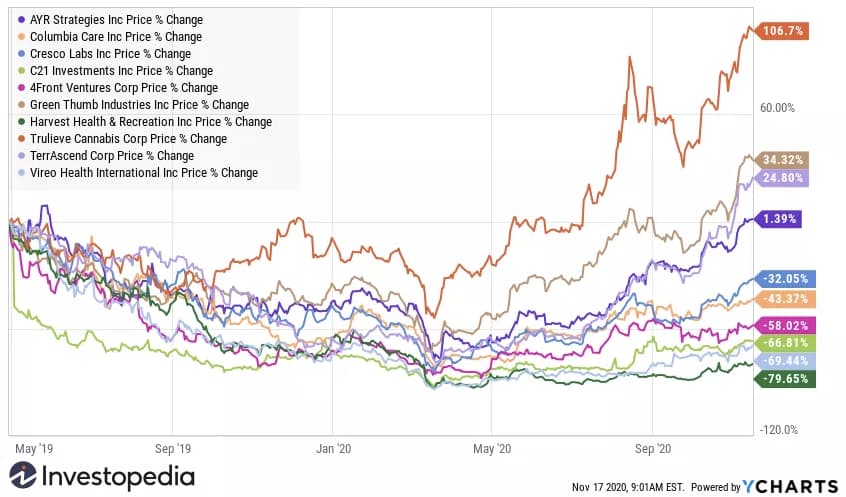 Structural landscape
In our recent Barbarians at the Gate column, we talked about how institutions are largely sidelined from investing in U.S cannabis stocks given the federal treatment. While select U.S institutions have found a way to accumulate exposure– Putnam in 4Front Ventures, Wasatch Global in TerrAscend, Cresco and Green Thumb – most of them are doing the work, taking meetings, and awaiting federal permission.

But wait, there’s more. It is likely that SAFE Banking and potential “Safe harbor” language will turn lending and listing from a matter of law into a matter of compliance which, along with the repeal of section 280(E) of the Tax Code, would further inflect these business models. Non-dilutive debt financings, NYSE listings, insurance, commercial banking and best practices await the space. 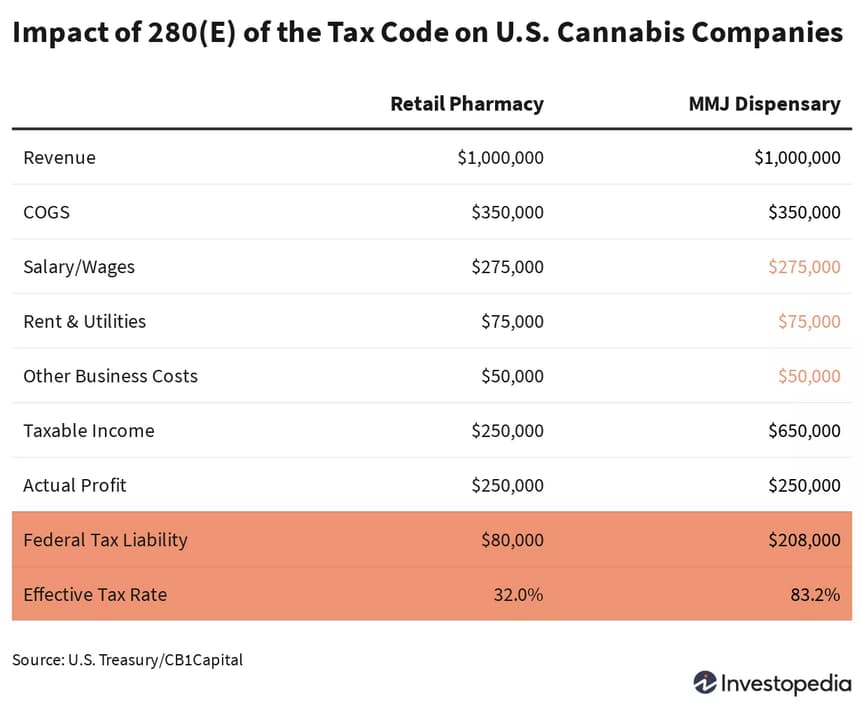 Psychology
A recent Gallup poll for legal cannabis support recently ticked at 68%, while multiple state governors, politicians from both sides of the aisle—and heck, even the Vice-President elect—are lobbying for the passage of a legal and regulated U.S cannabis market. One could argue that the combination of state budget shortfalls, the need for new jobs to combat the structural unemployment and the percolating social justice initiatives have created a perfect storm for U.S cannabis.

Still, after decades of government-sponsored propaganda that programmed us to believe “this is your brain on drugs” and “I learned it from watching you dad,” and after it was seared into our collective consciousness that cannabis was a gateway drug that would ruin our lives, we are quickly learning that this plant is a friend, not foe; and that it’s prohibition will prove to be an exception, not the rule. 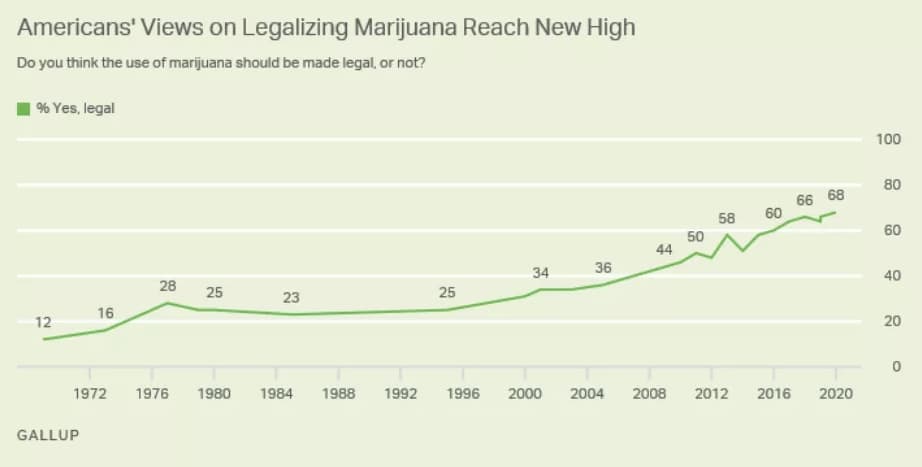 Bringing it Home
After a wild few weeks for cannabis stocks on both sides of the border, one of the greatest disconnects that remains is education and awareness. Professional investors use Canadian companies listed on U.S exchanges as proxies for the U.S operators, which are listed on Canadian exchanges and dominated by retail traders. Only those paying attention will separate themselves as cannabis 2.0 takes shape.

Additional channels for capital are opening. MSOS, which is a NYSE-listed Exchange Traded Fund that we advise, is the only ETF that offers access to U.S plant-touching cannabis operators (via total return swaps). If we’re correct that regulatory change is coming, hedge funds, family offices and offshore investors will front that institutional flow and re-rate multiples as the market becomes more efficient.

This is, of course, in addition to the eastern seaboard of the United States adopting adult-use cannabis, when upwards of 80% of the U.S population will live in cannabis-friendly states. Once that happens, and it is a matter of when, not if, we’ll begin to unpack the forward path, which includes the inherent risks involved when an alphabet soup of bureaucratic agencies attempts to stick their hands in the pot, all at once.

The question everyone wants to know is, “will U.S majors sell off after earnings?” and the best answer I can offer is, “I don’t know.” We do know that insider windows will open and there is no doubt some of the stocks are technically extended, so it’s certainly possible, perhaps probable. But news flow should continue to support higher prices into year-end, subject to the usual risks and caveats inherent in the capital markets.

But when you’re buying growth at value multiples with a total addressable market that will continue to expand and given the perceptional and generational off-sides that will dissipate with time as this next phase of this secular bull market takes shape, investors have every right to be excited. Welcome to America. Land of the brave, and home of the Green.
Reactions: BogartAmungus and amekins