Which Major Brand Will Be the Next to Invest in Cannabis? 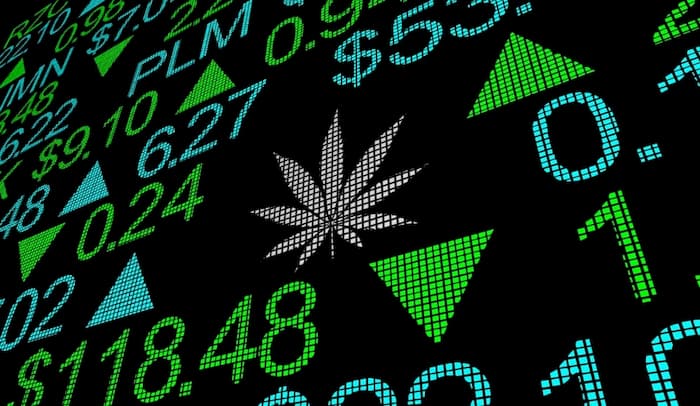 Marijuana reform at the U.S. federal level could soon be on the way, as it won't be long before Democrats are in control of the House, Senate, and White House. And that's giving the industry a lot of hope that legislation favorable to marijuana could pass, potentially making the already hot cannabis industry an even more appealing investment opportunity. It could even pave the way for companies in other industries to start jockeying for position, partnering up with cannabis producers before legalization -- which could still be years away.

To date, tobacco giant Altria and beer maker Constellation Brands have been the biggest names to invest in cannabis, linking up with Cronos Group and Canopy Growth, respectively. But other companies have been kicking tires and making smaller moves, including Anheuser-Busch (NYSE:BUD), Colgate-Palmolive (NYSE:CL), and Unilever (NYSE:UL). Let's take a look at which company could be the next industry outsider to invest in the burgeoning cannabis market.

The billion-dollar incentive
It's not difficult to see why companies may want to get in on the cannabis industry: It's in its early growth stages and there's still tons of room to run. For companies struggling to grow their top lines, cannabis could be an easy way to get a boost. According to data from ResearchAndMarkets, the global market for cannabidiol (CBD) oil and the overall CBD consumer health market could be worth as much as $123 billion in 2027, averaging a compounded annual growth rate (CAGR) of 25.6% until then. The global cannabis beverage market is narrower in scope, and Fortune Business Insights projects that by 2027 it'll be worth $8.5 billion. That said, this market was worth just $367.4 million in 2019, meaning it's growing at a much higher CAGR of 50.9%.

That 20%-plus growth is hugely attractive to companies like Anheuser-Busch, Unilever, and Colgate-Palmolive, all of which posted single-digit revenue increases in their most recent earnings reports. And while their businesses are stable and offer good diversification with many great brands in their portfolios, only Colgate-Palmolive stock has (narrowly) outperformed the S&P 500 over the past year: 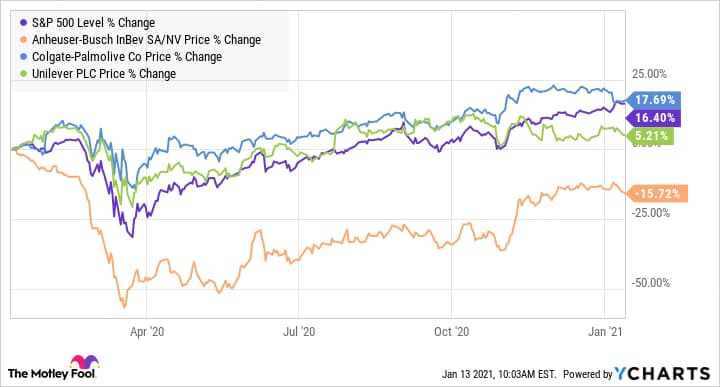 Which company is the most likely to make the next big move?
All of the companies noted above would have plenty of incentive to invest in cannabis, but that doesn't mean they'll do it. One reason is that businesses risk turning off their existing customer base by getting into cannabis. According to a Gallup poll from November, the percentage of Americans who believe marijuana should be legal is at a record high of 68%, up from 66% a year ago. It's a rising percentage, but that still means close to one-third of Americans aren't in favor of legalization -- and for companies posting single-digit growth, it may not be worth alienating or upsetting that many consumers. That's why making small moves has made sense thus far.

Unilever's subsidiary, Schmidt's Naturals, is how the U.K.-based company has exposure to the CBD market today. In 2019, Schmidt's Naturals announced it would offer a line of CBD products, including deodorants. Because they're hemp-based, these products are legal in the U.S. as of late 2018, when they were legalized under the Farm Bill. Regulations stipulate that hemp products must contain no more than 0.3% of the psychoactive cannabis compound tetrahydrocannabinol (THC). The CBD market in the U.S. was worth $4.2 billion in 2019, and analysts expect it will rise to $16.8 billion by 2025. Ben & Jerry's ice cream, a key Unilever brand, has also expressed interest in making CBD products, but it won't do so until marijuana is legal federally.

Overall, Unilever appears mildly interested, but management appears to be taking a conservative approach toward cannabis, focusing on hemp for the time being. Marijuana investors shouldn't expect a big move from the company anytime soon.

Colgate-Palmolive may be an even bigger long shot. The company's main foray into the industry thus far is through the acquisition of Hello Products, which last year launched a line of CBD oral care products. These items technically fall under the consumer health category, but it's such a niche area that it's hard to determine just how strong the demand may be for toothpaste or mouthwash that contains CBD. And given that Colgate-Palmolive's business centers around "trusted brands," management may prefer to remain more conservative rather than risk ruffling the feathers of its existing consumer base.

Finally, there's Anheuser-Busch -- which does offer some possibilities in the cannabis space. In fact, the company is technically already in the marijuana market through its joint venture with Canadian cannabis producer Tilray (NASDAQ:TLRY). The two companies reached an agreement in 2019 to work on products for the cannabis beverage market in Canada. However, the rollout has been slow, and many products still hadn't made it to store shelves by early 2020, months after the new segment technically opened for business. That means it's hard to tell thus far how strong sales have been for the joint venture; Tilray made no mention of beverage sales in its most recent quarterly earnings report, released Nov. 9. That said, this head start means Anheuser-Busch is the most likely of the companies listed above to make a big splash in the cannabis industry.

What the next deal may look like
Whether it's Anheuser-Busch or another beverage company, the beer industry appears to be a natural fit for cannabis, as there is a potential for their products and target markets to overlap. Any deal will likely involve a Canadian cannabis company, since pot is legal in Canada and investing in a licensed producer there won't create any legal problems.

It's possible that Anheuser-Busch will invest in Tilray and strengthen its relationship with the British Columbia-based company. However, the upcoming merger between Tilray and Aphria could complicate things. Either way, there are many other cannabis companies out there for Anheuser-Busch or another beverage company to partner with or invest in, including industry giant Aurora Cannabis, which has struggled to find a deal.

While there's no guarantee if or when a deal might happen, investing in Anheuser-Busch today could be a great way to gain at least some exposure to the cannabis industry without having to invest directly in a licensed producer. Although the stock has been struggling over the past year, it's likely to recover along with the economy as restaurants eventually get their operations running normally again. And if Anheuser-Busch ends up making cannabis a bigger part of its overall strategy, it could make the beer company an even hotter investment over the long term.