I allways save my trim with trichome to make my famous pot brownies, but dont just grind your weed and throw it in the mix, first you need to make butter, what u need, 1 half ounce of cured trim, 3 sticks butter, a large pot and a small pot, & and a wire mesh strainer, i mentioned my cousin was in NAM and taught me everything i know, he was exposed to agent oarnge and had a very hard time but never complained, so first you take the large pot fill with water bring to a good simmer, put the 3 stics of butter in small pot along with the trim, you want to cure it so it tastes good, you want the pot with the butter and trim to reach 180f stirring occasionally for 2 hours, after that you strain the butter you dont want little pieces of weed in your mix, and if you just throw trim in brownie mix it tastes terrible and weed is sharp can give you a tummy ache, i could probably make 2 batches but when you eat my brownies your gone for 2 days, the trichome and thc sticks to fat in the butter and you cant really taste the butter just a little, you can make cookies if brownies are not your thing, note pic of spoon see how nice and golden it is? That is what you want, my cuz died a month ago and hade male breast cancer from the agent oarnge defoliant and both breasts removed but the cancer spread, he was cremated and the whole famly is throwing a party he did not want people to mourn him so we figured this will make him happy, it sucks the only time you see your whole famly is when someone dies, so im bringing brownies my other cousin's are bringing whatever smoke they have at the moment and an open bar for my famly straights who dont partake, i would luv to slip my straight as an arrow sister a brownie she grounded me for 2 months for smokeing a jay back in the day, brownies are a good gotcha but she would probably freak out so no revenge lol the man brought seeds back and year after year we grew them, they live in Maine were he sold his crop even to the cops, weed is no big deal up there but drinking is, once it was legalized he became a care giver and grew peoples meds if they had no mony he gave it free, i miss that guy. Last pic is from last years grow. I use a similar recipe but i strain mine through cheese cloth. Double up on the rubber gloves so i can really squeeze out all the butter. Still is really hot though, even with the double gloves

I’m a big believer in low dose edibles so that a new users can tip their toes and have a good time. The best part is you get four brownies instead of 1/2.

Sorry about your friend.

I put the butter and bud flower in a jar. Put foil over the lid. Put water in my smart pot. And toss it in there for 12 hours. Then filter into another jar when it's ready. Was thinking of trying a French press to make it quicker to strain.
I try new things.

Anyone try this thing or have thoughts about it? 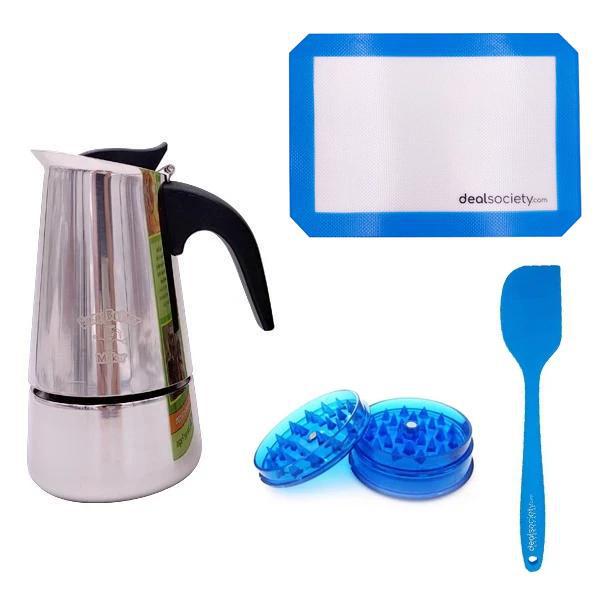 www.dealsociety.com
You must log in or register to reply here.

so i made canna butter
2

Looking to make canna oil in a slower cooker
2