Anyone In Boston Still Smell Molasses

Anyone in Boston's North End will tell you that on a hot summer day you can still catch a whiff of molasses.

The entire neighborhood was overrun with the stuff on one January day in 1919. A large tank of molasses burst open, sending waves of the sweet, sticky brown liquid crashing through the streets. Buildings collapsed and 21 people were killed.
And it was waste deep, According to historical accounts, the molasses moved at a speed of 35 miles per hour, which is about 15.5 metres per second, which is really quite fast. Initially, I actually thought, "How in the world could it really have moved that fast?" and sort of surprised myself when I started doing the calculations. I realized that because the molasses is one and a half times denser than water and there was so much of it in this tank, in fact, fluid dynamics and the physics equations predict that it would move at speeds that are about 15 to 17 metres per second. It's totally in line with what the historical record says. 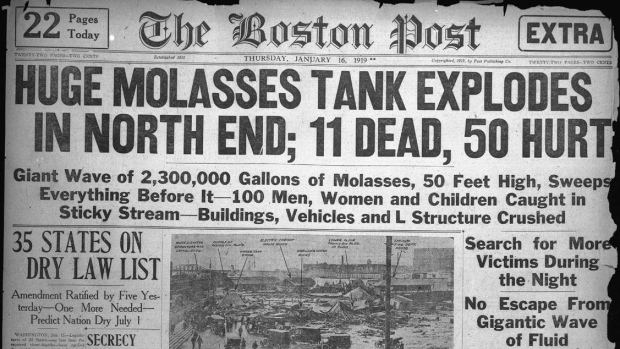 thanks I appreciate when a link to the original story/idea is included to give a more complete picture of what happened.
damn that must of been an insane mess to deal with and clean up.
J

I've got a whiff of molasses on a hot summer night in the North End before...
Could have been Bovas making deserts now that I think of it!

All I smell is Mikes pastry
J

masshole61 said:
All I smell is Mikes pastry
Click to expand...

Come on... That place is for tourists!

If you like a fresh cannoli, the only place in town is Modern Pastery.

When my daughter was teaching at BU and tufts she always bought me a box of cannolis from mikes when she came home,dusted in sugar and tied up with packing string,love em.Im sure I've had modern pastery too if they've been around awhile.Monica's Mercato for lunch is great and cafe Pompeii for coffee after.I once got the wait staff at Giacomo so fucked up on a Saturday night it was ridiculous,every time I go to Boston I eat at the maître D's house in Somerville now,dudes family.
I watch them come and watch them go..

msn.com posted a short vid this afternoon on this
http://www.msn.com/en-us/video/tune...919-mystery-solved/vi-AAkV2qG?ocid=spartanntp

haven't seen or read anything about how long it took to clean up, but hard to imagine there would still be any remnants of it 93 years after the fact.
You must log in or register to reply here.
Share:
Reddit Pinterest Tumblr WhatsApp Email Link