Im sorry if this has been addressed but i searched to no resolution.

I want to incorporate barley into my soil build along with my compost and worm bins. I bought 9 lbs from build a soil of organic sprouting barley so at this point it is un-malted. If i were to just add 1/2 cup per cf of unsprouted/unmalted barley seeds would it have same benefit as if the seeds were already malted?

Also if i did sprout them when i grind them up do i have to use water or can i just grind them once they are air dried and add as dry amendment? My intention was to grind half of malted grains and half with taproots sprouted just tossed in.

Also a brew store in my area sells malted barley,
But he said its malted and kiln dried, i just wanted to ask does that effect microbes or am i just more so after the enzymes in the malted taproots?

Thanks in advance guys and gals
HG

Malted means sprouted then heat killed. This is the stuff you want to feed your soil microbes I believe. I perceive that you could take the unsprouted barley soak it in water to sprout then throw it in the blender and feed the soil with that to the same effect. I’m no expert but I’ve listened to a few experts. It’s the enzymes ciliated during the sprouting process you are after. I hope I said that right.
H

Im in the same boat, i’ve listened to buku podcasts about the subject but never the clearest instructions as to how to use. At least in the context of what im trying to do with them. But now that i know that i have a nice steady supply of rye for flower and barley for veg and transition.

I use the malted stuff from the brew store. I sprinkle it on to the top of my bed and scratch it in with my fingers through the mulch. I have worms in the bed that eat it and it is gone quickly. So enzymes + worm food I reckon.

Hi all, so I recently bought a 50 lbs bag of barley seed pretty sure it is 6 row (that was all that was available). I tried to sprout some but it seems I soaked too long. The fermentation process has started.I am wondering if they are good to grind up and apply to soil or is their anything I need to worry about? When I soaked the second time the water got foamy on top and the smell had me wondering if it is safe to add to soil. I guess the smell kind of reminds me of beer. Malted barley seems pretty expensive compared to the barley seed which i’ve been told this is clean/unsprayed. 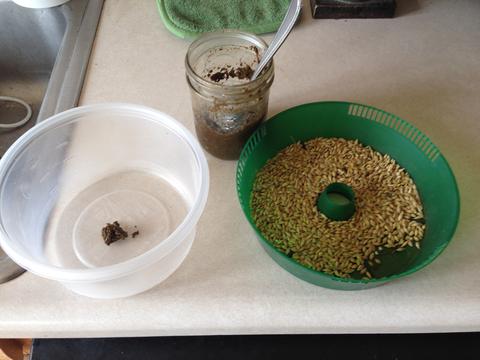 You can read about the benefits of SST or Sprouted Seed Tea in many places online and this powerful recipe is quickly gaining popularity. This Blog Post is about how to use BuildASoil Barley Seed to sprout for your sprouted seed tea solution.

buildasoil.com
You must log in or register to reply here.

Organic Soil: First Grow something growing in soil other than seedling