I recently came back from a trip to Africa and brought back some ''Black African'' seeds.
I'm a half-caste Nigerian so I visit the continent quite often.

After some travelling trough central-Africa I came across some premium weed simply called ''black juju'' meaning black voodoo/magic.
This shit made me go maddd :icon_dizzy: trippiest high I've ever experienced for sure!
I smoked it in daytime under the hot African sun so I thought that had something to do with it, so I smoked sum again in the night.
THE SHIT GOT ME EVEN HIGHER! I thought it was laced or something??

One week later I visited the dealer that sold me the herb.. I asked him for more info bout this particular strain.
He told me they call it juju ojii on the streets, quick Igbo lessons: juju means magic and oji means black.
The strain did not originate from that region, it was brought in from Tanzania according to him.
It was like I was interrogating him so he noticed how interested I was and asked me if I would like to see his current grow...

He took me into a ''bush'' and in the center of it was a small cleared area.
He had alot of stuff growing and gave me a little tour.
After a while of smoking and talking we got to the Black Magic.
''OMFG'' were literally the first words that fell out my mouth.

The buds had like a black/blueish hue around it.
The shit scared me a little bit it had like, an aura? lol
seriously tho, it had some nice pigmentation going on on the buds.
The leaves were very dark blue steadily darkening to black on the tips of the leaves. YEAH BLUE not purple!!
The buds smelled like colonels Sander's secret mix of herbs and spices. A very pungent smell.

I fell in love! I immediately asked him if he could share some beans.
And thank God he said: no problem my man! :rasta2:
We left the bush and he took me back to his compound.
He went inside his crib and took a big brown paper bag wit him.
It was full of FAT dark seeds! I've never seen any beans this big! so I scored about 100 beans!

I sent them in 3 packages to several safe addresses back over the ocean and they literally just arrived! I'm so fukking stoked u guys!! :rock
I'm going to germ sum next month, can't wait to see how they turn out under my artificial sun.

If people appear to be interested I'll keep u guys updated!

Good luck growing them out, i'm sure you'll find something amazing. I just love African sativas. Keep us updated.

that sounds amazing my dude! i would love to see a journal! do u have any pix of the beans?

going to keep watching thanks for sharing your story and hopefully your beans!!
D

pure awesomeness. I love how you describe the smell as some KFC original recipe. LOL
D

U got pretty lucky man,even DJ short hasnt been able to aquire seeds of this strain.
B

Sounds finger-licking good. I hope you post a journal on these beans would love to see them grown out.
T

While in SA earlier this year i heard a lot about a strain called Congo black some said it was too psychoactive, far stronger than durban or swazi, everyone i talked to gave a similar description as you. Congo and Tanzania are right next to each other also. Hope this helps.
C

Thanks for the replies guys!

Here are some pics of the beans..the quality is a bit crappy but what the hell.
I've put 2 of my ex-biggest beans next to it so you guys can compare. 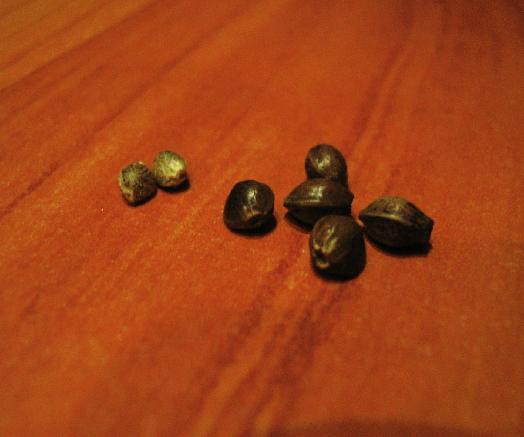 I hope I can do a decent report on 'em.
I gotta get some shit done first before I have enough time for it..

No telling if this is the same strain that DJ had 30-some odd years ago , lol . But definately do a grow show , and please , if possible an open pollination and drop a bunch on the bay .
C

I didn't even know that this strain is so wanted and that DJ is even in love with it!? :surprised
I just did a quick search and read all the other threads about this strain.

Now that I know how special these beans are (if it's the same one as in the stories) it changes everything!
I'll give em a V.I.P. treatment instead of just testing them by using them to fill up holes in my canopy! lol

Thanx for the info guys!

african genes are amazing and full of potential...

cant wait to see how these turn out.....

many blessings on your grow...

bro u`ve got some higrade! def would like to see grow report and good luck with em)))
C

Thank you very much Bodhi!
P

I have DJs book and always wanted to get ahold of those seeds after reading DJs smoke report. Ive always wondered why no breeder has made the trip to find this strain, hopefully it gets out there in some breeders hands now.

trichburner said:
No telling if this is the same strain that DJ had 30-some odd years ago , lol . But definately do a grow show , and please , if possible an open pollination and drop a bunch on the bay .
Click to expand...

I second that!
C

Thanks for all the kind words u guys!
I'll see what I can do to spread it around.. I'm planning to start another grow so they will probably be put on hold.
If I act impatiently I won't be able to make enough beans to fully share it with the masses.
I got about 100 beans to play around with for now.. so it's all good!

Thank u northone! :)
I'll do my best to keep you guys updated!

And the funny thing is, I didn't even have a clue of ''the legend'' I've obtained.
Now that I googled it and did some searches on several potsites I realise that this could be something great for the canna community!
It doesn't surprise me no breeder could get their hands on it! The place I got it from was roughhh and in a very remote area! a lot of rebels hangin around and shit like that...
U could probably find it on different locations in Central-Africa tho...

You shoulh send some to the farm so ogr jjnyc or another breader can work with some then do a open pop so the. Breadera have a more stable stock
You must log in or register to reply here.
Share:
Reddit Pinterest Tumblr WhatsApp Email Link