mysticepipedon said:
Well, that was a lot of worrying for nothing. This is what they looked like when I flipped them and walked out the door on Sunday:
View attachment 1190081

The Lemon Sunrise clones are growing like vines. Everything else is behaving itself.

Clearly the LS is thinking she has achieved "daddy's little girl" status, and that I'll let her get away with taking up more than her share of tent real estate. Little does she know she's only there to give me a few early buds, and those two bondage poles in her pot mean business.

I learned, long ago, that you have to slap these entitled plants down hard at the first sign of disrespect, or they'll walk all over you. But they're secretly begging for discipline.
Click to expand...

Nice ! Looking good when ya flipping? — I’m never that lucky seems I leave for few days and bam everything is yellow ( overwatered I believe in my case ) next up will be auto watering system for me

I did water them heavily just before I left, so that was a possibility. Maybe the extra perlite in the soil has something to do with not seeing signs of overwatering.

Total stretch at the end of week three is starting to add up, but this isn't bad at all. 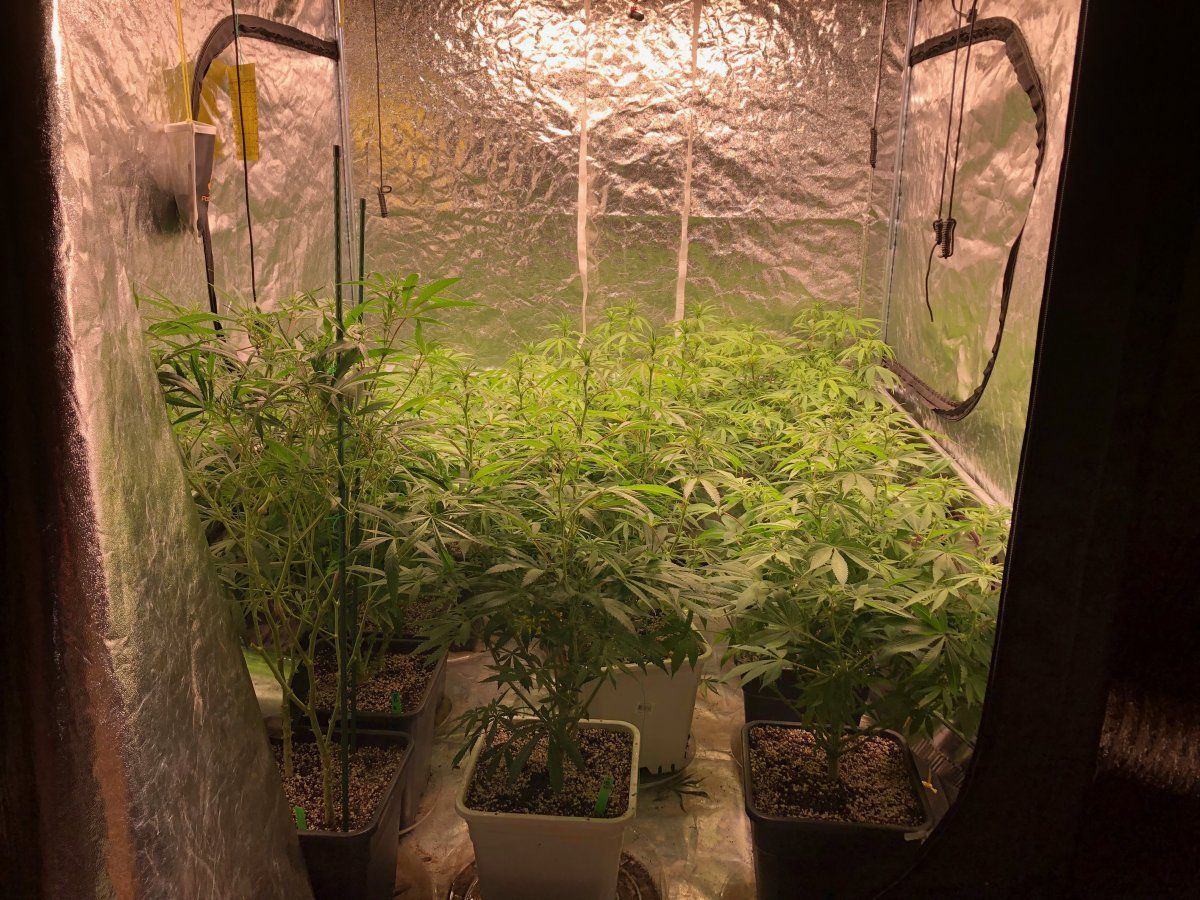 The vine-like Lemon Sunrise was shunted to the corner. She's essentially been defoliated below the canopy of the other plants. Here she is with her other tall tentmates, Scarlet Begonias and Dark Hollow. 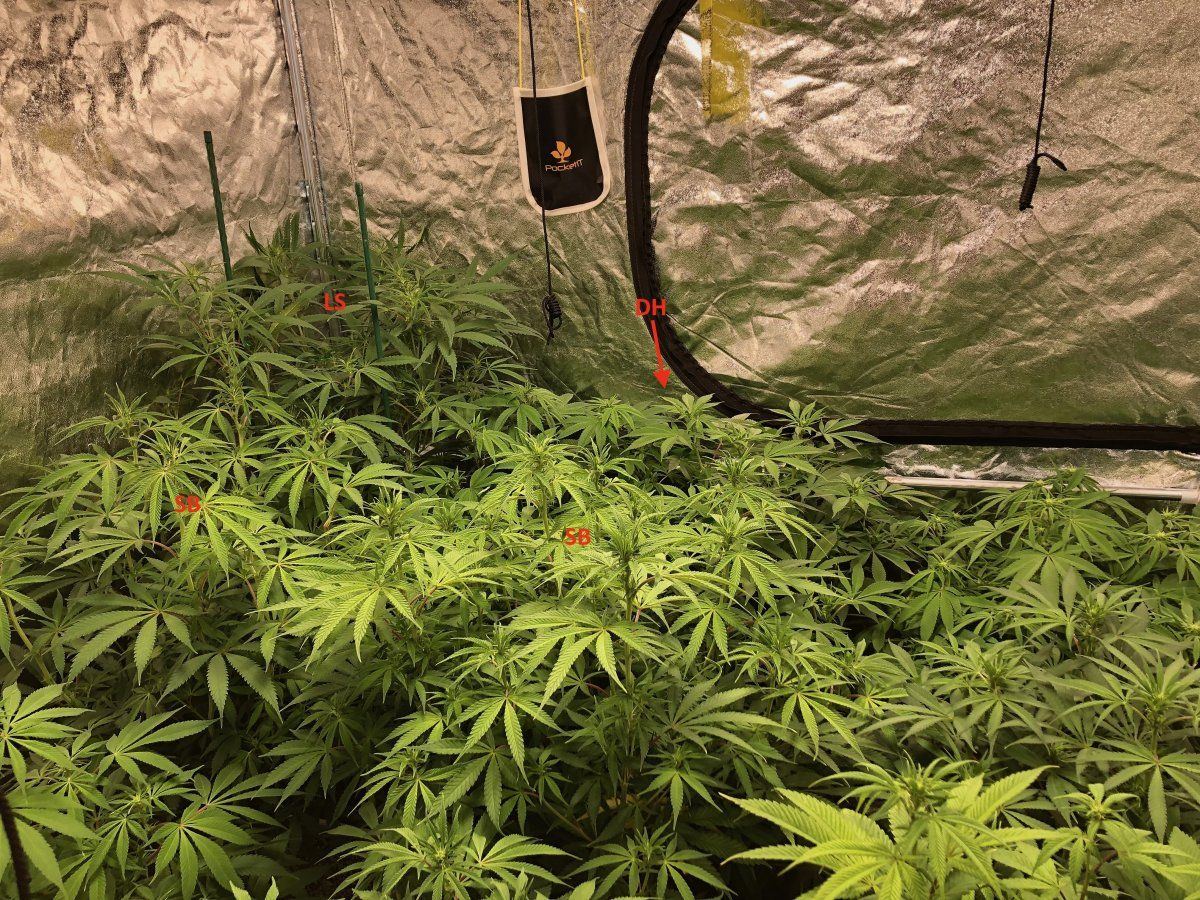 The shorties in the back include a Blueberry Butcher and a short Scarlet Begonia: 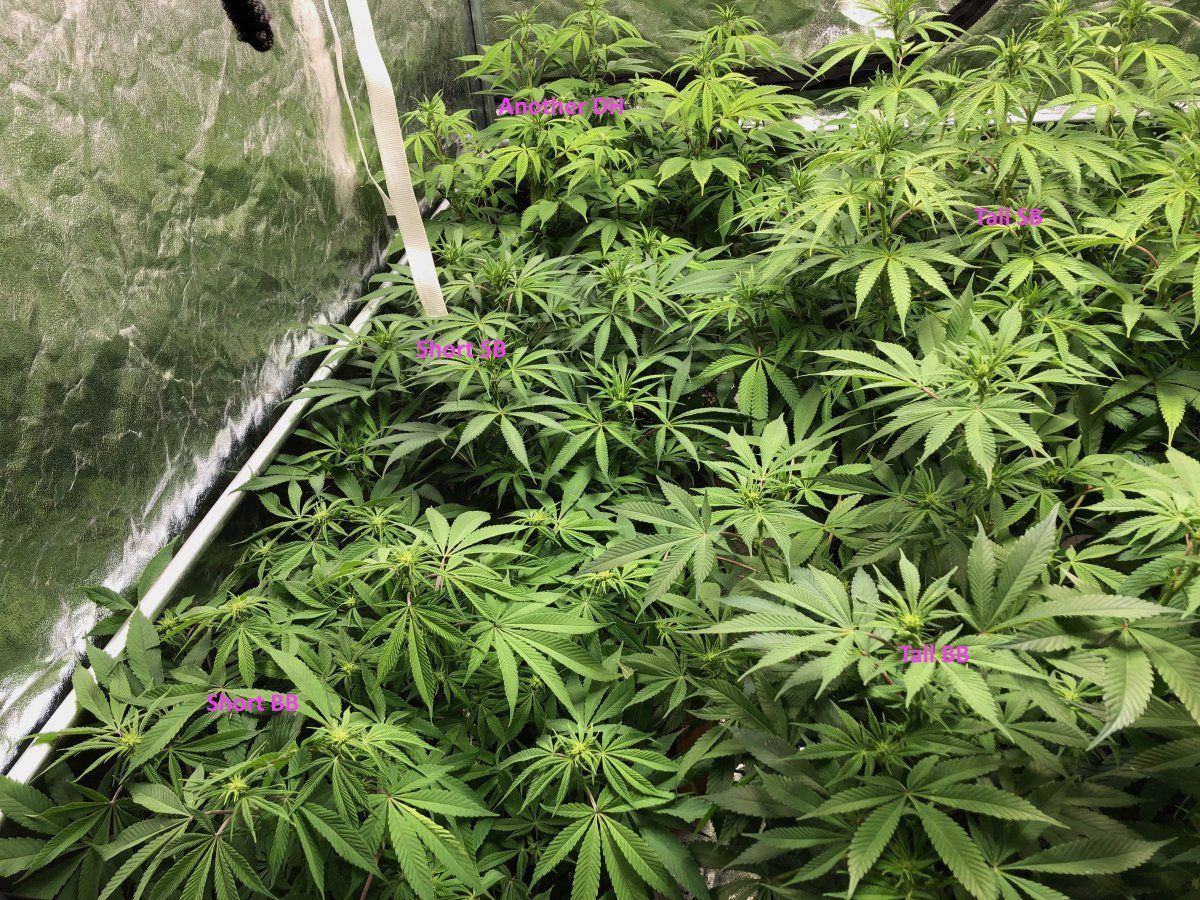 In general, as mixed strain grows go, there are no obscenely short or tall plants — except for Lemon Sunrise, who punishes you for pinching it back by doubling the length of the next internodes. But as you can see, She's in her corner, accepting her fate.

Fungus gnats are off the hook. The population seems to be too big for nematodes to handle. I think I might go with a Bti soak and possibly some predators.

It just occurred to me that the stretch isn't bad for the end week 3 because it's the end of WEEK 2, NOT 3.

This is what marijuana does to you.

The LEDs are finally at 100% power and the plants are just saying, "What else ya got?" I may finally dial this tent and LED fixture in. The secret of LEDs seems to be feed the fuck out of them. 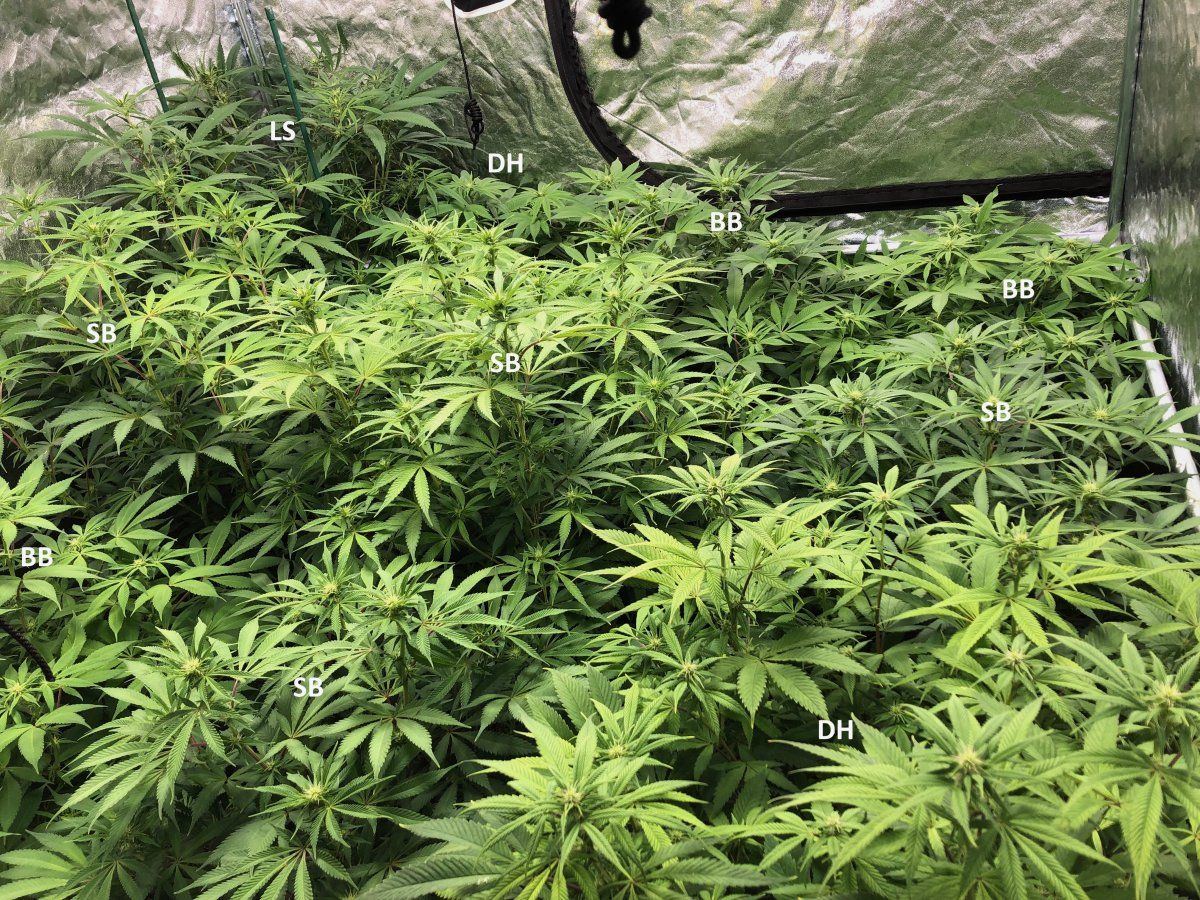 Looking forward to my first respectable harvest since switching from HIDs.

I germed a few from my ever-growing storehouse of seeds. The pandemic shutdown/slowdown/asssuckingbullshit forced me, against my better judgement, to keep buying more and more seeds. Business was insane and then the government sent me a check to do whatever the fuck I wanted to do with it, so now I have to continue the search for the plant that finally allows us to find the lethal dose of weed.

So with that task in mind, here's another shot in the dark.

These are all Irie strains. For those not familiar, Irie Genetics is a breeder named Rasta Jeff, who found a "special male" in a cross he calls Arise, that boosts potency, enhances flavors, improves structure, sharpens eyesight, increases IQ points, allows the handicapped to throw away their crutches, wheelchairs and walkers and brings peace to the Middle East. Or at least some of these things.

He is deeply involved in the commercial growing scene in Colorado, and has access to myriads of well-selected females of many of today's strains. He proceeded to cross the special male to many females and most of his non-feminized wares are crosses to this Arise male.

I've found a couple of great keepers in two Irie strains, so I'm continuing this exploration. The breeder seems to like the heart-racy, paranoia-inducing, where-the-fuck-am-I?, no-officer-nothing-is-wrong, kind of weed that I love.

Irie also worked with Subcool's Jack the Ripper, and recently came out with some crosses with an f2 male JTR. Blueberry Butcher is Blueberry Cookies x JTR f2. It is said to be energizing, but I expect it will be somewhere close to a 50/50 hybrid.

The plants are about 4 weeks old. So far, there is one confirmed female of each cross, a few males, but mostly plants that are still questioning.

And I got my first-ever whorled phyllotaxy!
View attachment 1178349
I didn't notice it until a couple of days ago. It's one of the questioning Blueberry Butchers.

Clearly this is an omen. I'd sacrifice a chicken to get to the bottom of it, but that running around without a head, bleeding all over the place part would really put me in the doghouse. I just don't want to hear "Fer chrissakes! Not in the house!" again. Looks like I'll just have to deal with a haunted tent for this grow.

Here's the whole gang. One male has met the Grim Clipper already. There are several others that are males, but they're still at a stage where I can be in denial about it, so I chose the denial option for now.
View attachment 1178354

You can see where I already burned the fuck out of a couple of them, before turning the light down to about 70%.

They're being grown using my classic organic soil, kinda method, where I pretend to grow organic, before supplementing with liquid OMRI-acceptable additives and nutrients, during mid-late flower. And they're going to get more Mg. I've added alfalfa meal, in hopes it will allow the soil to provide some Mg, but I doubt that will cut it.
Click to expand...

I am dipping my toes in here and I like it; there’s so much knowledge and information ; maybe in the future I’ll start my own pheno hunt, right now I am just trying to see if I can keep a couple of plants alive. I’ll be watching guys like you! Thanks for sharing!

Well, at the end of week 6, most of the plants have sucked the nitrogen out of their lower leaves already. Too early a fade. But they're looking and smelling good.

Here's the gang, labeled for the kind of scent I'm getting from them, as of today. 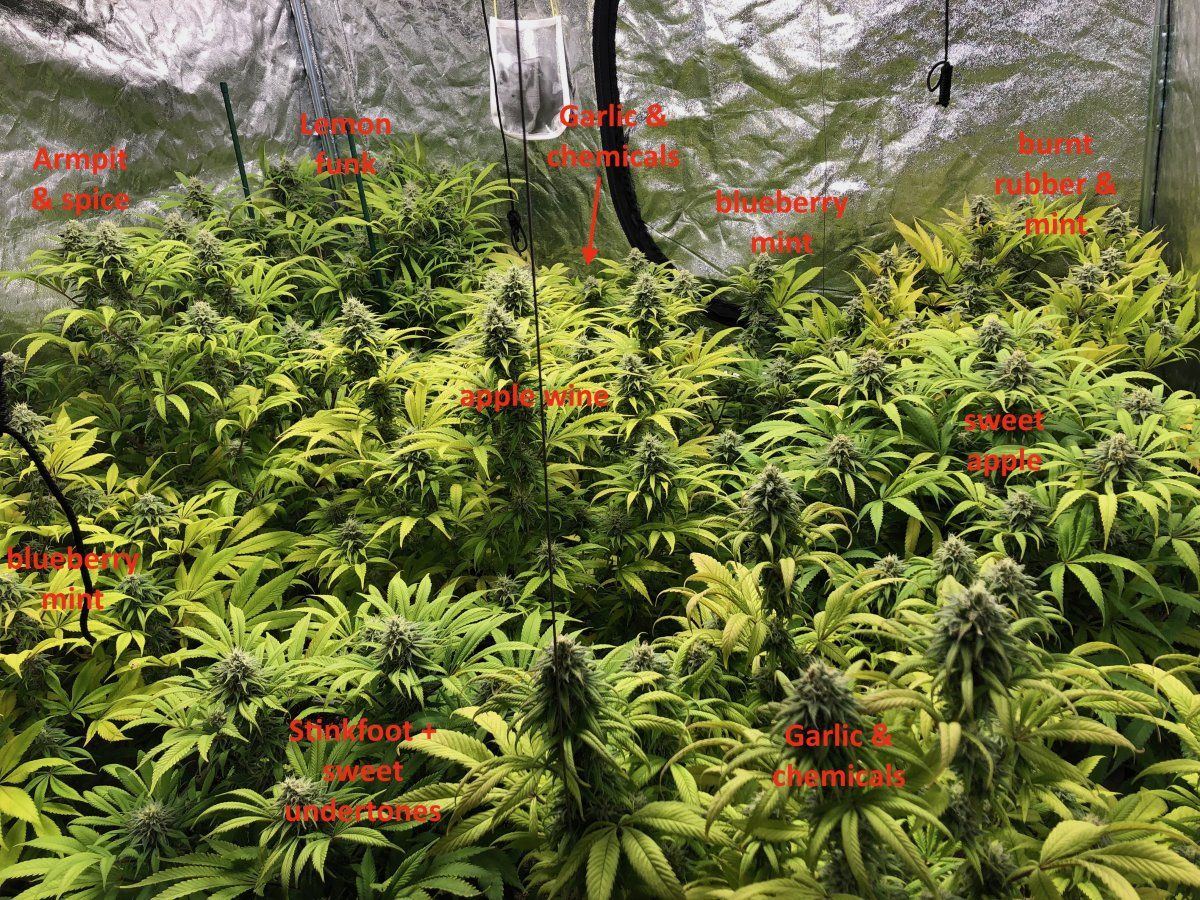 Someone should start a candle company that makes scents like this. Nothing says, "Thinking of you," like an Armpit-n-Spice candle.

I'm really hoping the apple wine scented one rings my bell. She looks like she could be a major producer, plus apple wine! Where has that scent been all my life? So it's looking like Scarlet Begonias can produce either an apple scented plant or plant that smells like an odiferous body part with a less objectionable undertone of one kind or another.

It's looking like there's 4+ weeks to go. None look like they're finishing early — even the Lemon Sunrise clone, who finished in 9 weeks last time. Oh well, more time to swell.

mysticepipedon said:
Well, at the end of week 6, most of the plants have sucked the nitrogen out of their lower leaves already. Too early a fade. But they're looking and smelling good.

Here's the gang, labeled for the kind of scent I'm getting from them, as of today.
View attachment 1200257

Someone should start a candle company that makes scents like this. Nothing says, "Thinking of you," like an Armpit-n-Spice candle.

I'm really hoping the apple wine scented one rings my bell. She looks like she could be a major producer, plus apple wine! Where has that scent been all my life? So it's looking like Scarlet Begonias can produce either an apple scented plant or plant that smells like an odiferous body part with a less objectionable undertone of one kind or another.

It's looking like there's 4+ weeks to go. None look like they're finishing early — even the Lemon Sunrise clone, who finished in 9 weeks last time. Oh well, more time to swell.
Click to expand...

You might be surprised what u can find in a candle ! Lol used to be a hobby of mine

Kinda fucked up this grow, yeild-wise, at least. It took 3 minds (actually 2.5 — one was mine) to figure out the fuck up. So let me spin ye a tale of "What the fuck happened here?"

Background: Getting used to the somewhat higher nutrient demands of LEDs, I tried a different, overly-complicated line of nutrients (over complicated for me). Before going further, here's the group shot at 8 weeks: 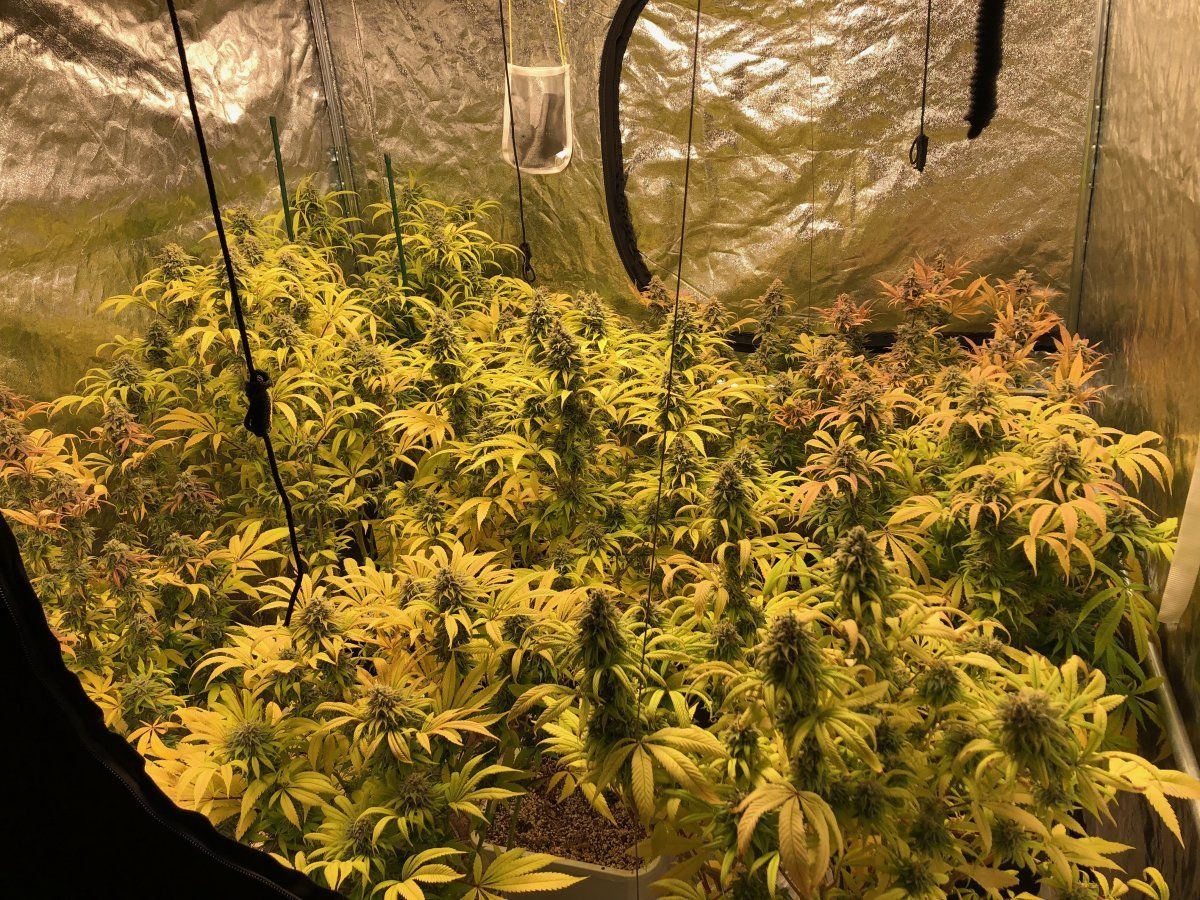 No, this pic wasn't taken under HPS.

This whole mess started when I ignored the cardinal rule when using new nutrients in soil — cut the dosage by half and see what happens. Instead, I followed the nute schedule and gave them too much P. This caused K lockout, which I mistook for an N deficiency (because I've had N deficiencies in flower under LEDs). So I added more N, resulting in many of the plants having hooked leaves and probably making the K lockout worse.

Well fuck it, the damage is done. They're starting week 9 and we're going with water until chop.

The nutrient fuck up does not seem to have affected potency, judging from some buds I snipped and dried when they were slightly younger than 7 weeks. My apple-scented Scarlet Begonias sent me into orbit — It's an insanely powerful sativa, VERY uplifting and energizing without making your heart jump out of your chest, and low paranoia. And if mingling among non-smokers, have some Visine handy. Unbelievable red eye. This plant has "looked done" for at least a week, though little, if any amber yet. I expect she'll be chopped in about a week. Out of 4 females I got 4 different phenos. The other three could easily go 11 weeks, judging from the look of them.

Dark Hollow is a fun indica, and this assessment comes from a guy who isn't a big fan of indica doms. Powerful AF, but with a little mind spark to keep me awake and interested (for a few hits, then I'd probably go down for the count). I had two females and they are both very similar. One has a more powerful scent (mostly garlic + assorted unidentified fuel and chemical hints). These gals may be done in a week.

The Blueberry Butchers are a bit more colorful. They will probably go at least 10 weeks. The sample I took did not impress me, but it was not as mature as the SB and DH. I tried a blueberry mint scented one. The one in the right upper corner smells like blueberry + something awful (can't decide — puke + stink foot?), so I'm guessing that one would be the closest thing to a keeper, assuming it develops a more interesting buzz.
You must log in or register to reply here.