Buds drying on plant, a week into flush

Hi
I'm a new grower, this being my 2nd grow. 1st went OK but not great results as expected from a newbie, but was happy with where I went wrong and how to improve etc.

Currently flowering a mother plant that was no longer needed for clones. Been a bit of a nightmare to be honest, had various problems along the way, think I was under feeding nutes or possibly not getting ph right. Anyway got to what I thought was flush time so started flushing, only to realise I should've checked trichomes before flushing. I also trimmed a load of fan leaves off, probably too many. Mostly yellowing ones but some still green ones too, to allow more light to lower buds.

After a week I checked and most trichomes were still clear, so I stopped flushing and started feeding nutes again for a few days hoping trichomes would change, however during this time a few problems have occurred...

-Smell disappeared almost overnight and was replaced with a hay like smell.
-The stickiness of the resin on buds disappeared by about 80%.
-A few smaller buds lower down at the side appeared to dry while still on the plant, leaves dried up and buds looked dry and soft too.

I thought shit its dying so need to harvest quick, so I flushed again for a few days. I then noticed my Inkbird temp controller had failed, it turned heater on but failed to turn it off again, temps got up to 35⁰c at one point, not sure for how long or how many times this happened. I think my light (300W Attis led) was a bit close too, but no real sign of light burn.

More buds & leaves (fan and sugar leaves) had have dried up over the weekend, mostly in centre of plant. I'd say about 1/4 of all buds have dried up like this.

Trichomes are still around 50/50 clear/cloudy and don't seem to be changing much. Pistols have been very orange for a couple of weeks. No obvious signs of bud rot, dried up leaves are hard to pull off.

I don't know whether to feed more nutes, flush for a bit longer or harvest immediately. If I harvest now I think it'll be a shit smoke as trichomes are telling me it's too early, but if I wait I'm thinking it'll be too late as it'll all die off. Will get pics when I get a chance.

Another 2nd grow newbie here, but this is some of what I learned. You definitely shocked em. Might hermie and seed some. Don't switch up on stuff so quickly. I'd chop, live and learn. Just my opinion
Last edited: Nov 1, 2021

Panhead59 said:
Another 2nd grow newbie here, but this is some of what I learned. You definitely shocked em. Might hermie and seed some. Don't switch up on stuff so quickly. I'd chop, live and learn. Just my opinion
Click to expand...

Thanks for reply. Yeah thinking they were too shocked, but not sure what caused the drying out while still on plant, was it removing too many fan leaves, or too much heat?

How do you tell if its seeded or gone hermie?

I fed last night, (Sun), going to feed again tomorrow night with low nutes (Tues) flush with Canna Flush on Thurs then do 48 hour darkness then chop Saturday night & hope for best. Most buds are still OK and nor drying, just hope it stays that way and the trichomes milk up some more.

Once I chop I'll separate for drying the already dried buds and the maybe good buds then test in a few weeks.

post pict. no one can do any good for you without pics

Soil, light ? Pics ? A hermed plant in itself won't do any harm. Same potency. Can be caused from many things. All resulting in stress to plant. And to you!

nanners are sign. Pics would help with drying out ?. Could be several things like light, watering or something else. Pics speak a thousand words.

Thanks, will add pics this evening when lights come on.

in flower, especially longer into flower, anything you alter will piss her off. depending on genetics, you can only piss her off to some point and her revenge is to put out "nanners".

nanners are the insides of a pollen sac. so she made a boy part to insure her next cycle of life. the nanner just appears to just pop out one day, but that is not really how it is, because there is no sac around the boy parts they are born putting out pollen, way before you see them.

if the nanners happen when the hairs are white, you will probably have seeds in the end. the good news is, if you watch out and remove them (put a drop of water right on them then pluck them) you have just a couple of seeds on the bud, or the one right by it. the nanners dont put out a sac full of pollen, they put out a little pretty continuously.

if the nanners happen when the hairs are brown, it might be impotent. as the end gets near, the more likely it is impotent. fewer viable pollen.

i say all of that to say, from the sounds, it - you might have let her go to seed.

Sorry i can't help. I know zero regarding coco.

If she's gone to seed would that explain the drying buds and does that mean she's completely knackered, even buds that look OK still?

Some pictures below. Checked trichomes again, maybe 40% cloudy? Can't see signs of bananas, but I'm a long way from being an expert. Has it seeded?


Overall shot of plant. Had to put some string up as stems were falling over, not thick enough for the buds?? 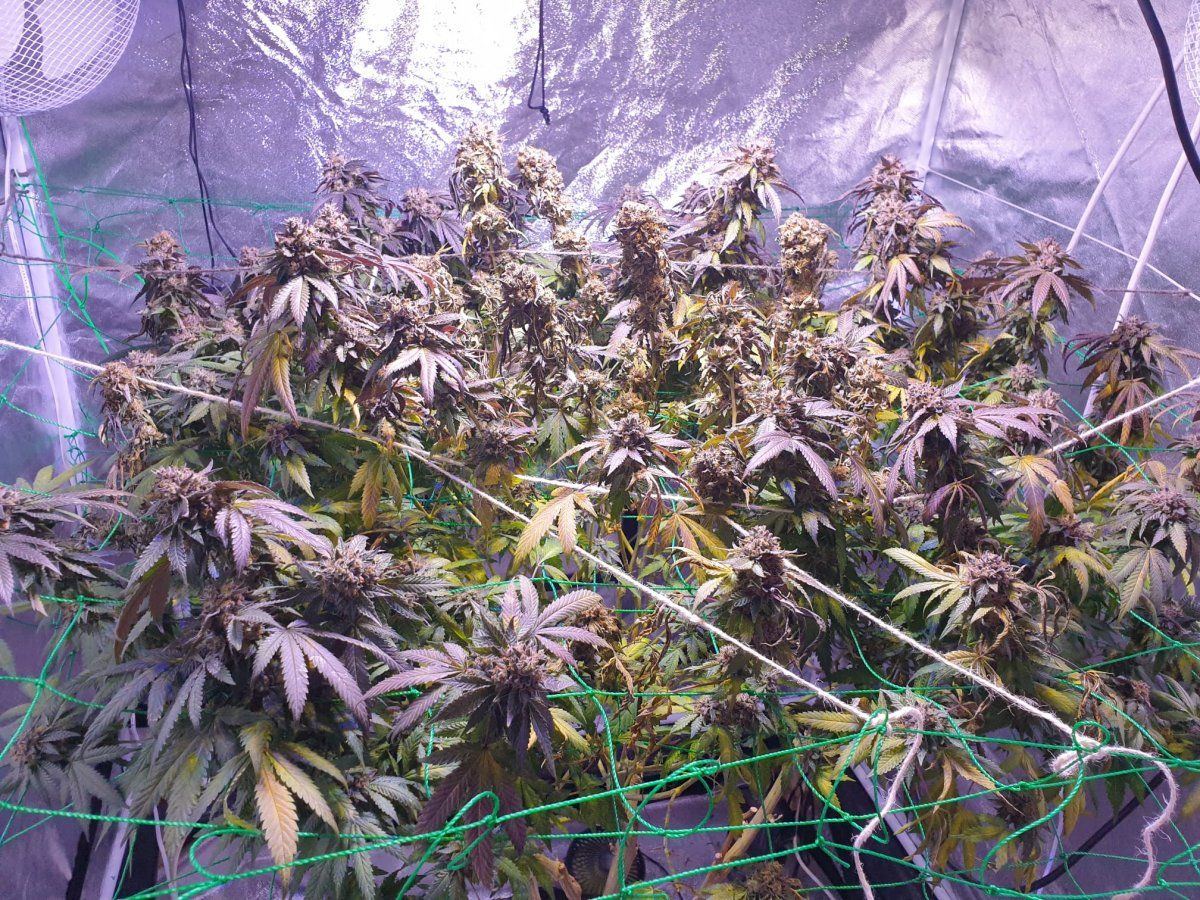 Same picture, but circled red are where dry buds mostly are. The first ones to go were some smaller ones at the back, about halfway down. I chopped those down, now a load in centre of plant have gone dry and a bit crispy. Buds still feel a little firm though. 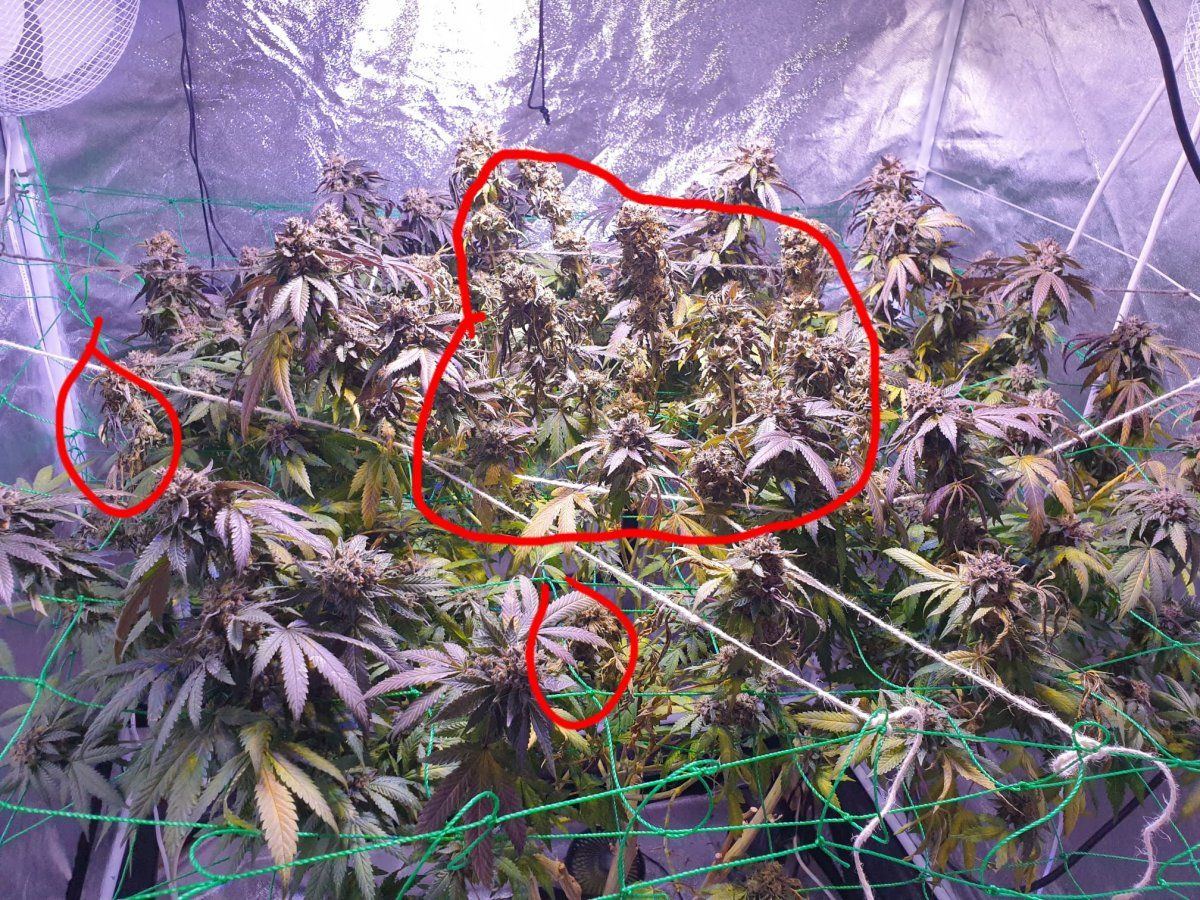 This bud is OK and hasn't started drying on the plant, any sign of seeds? 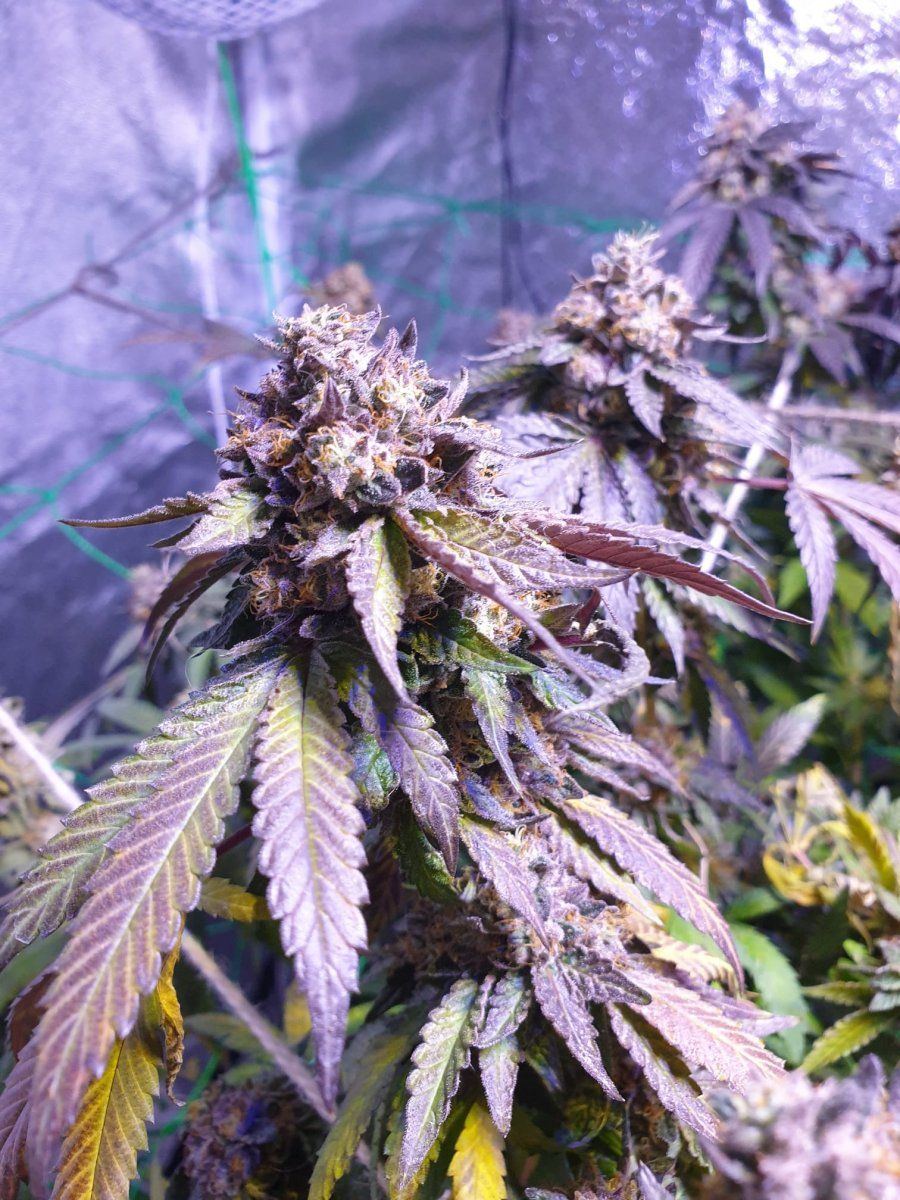 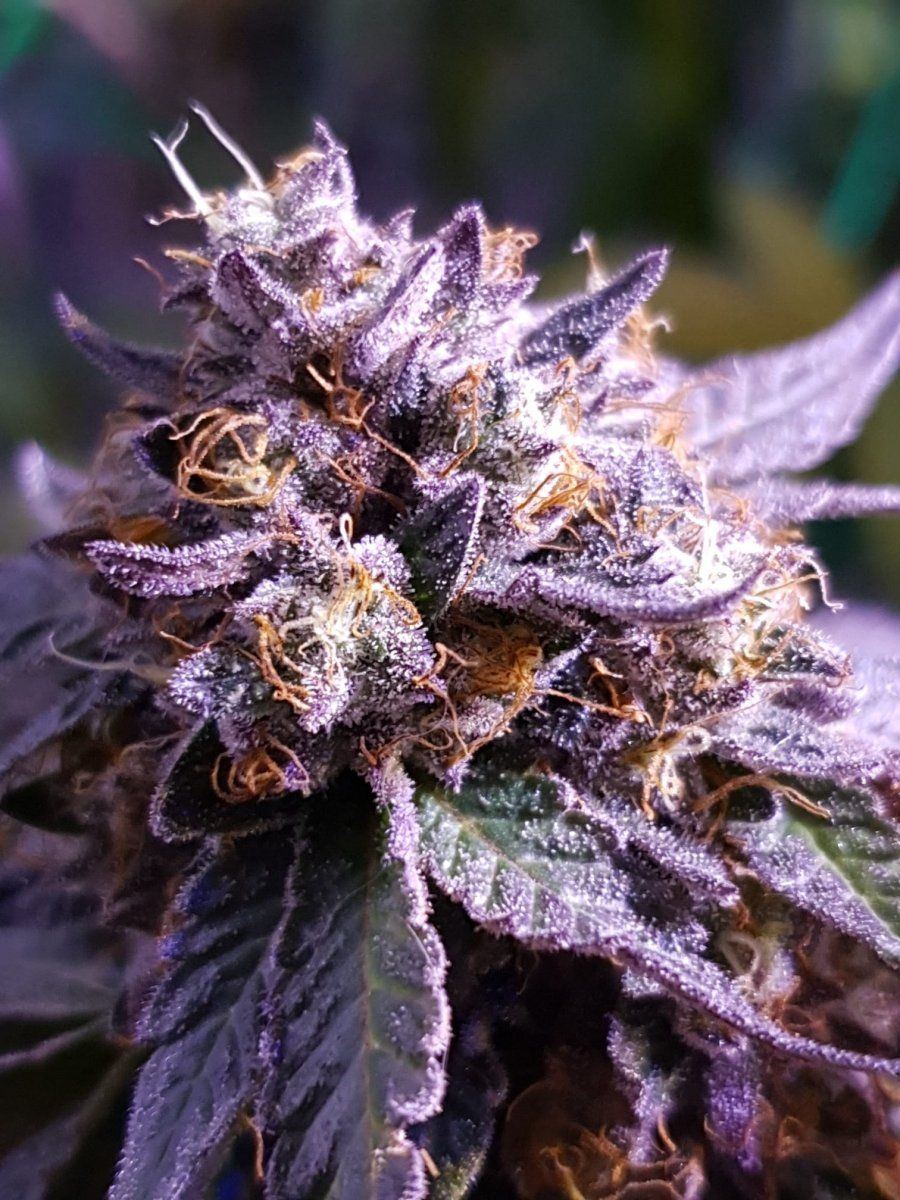 Started drying out. Leaves look like may be a bit of rot, but they're hard to pull away and when you do pull them off they're still dry and a bit crispy. 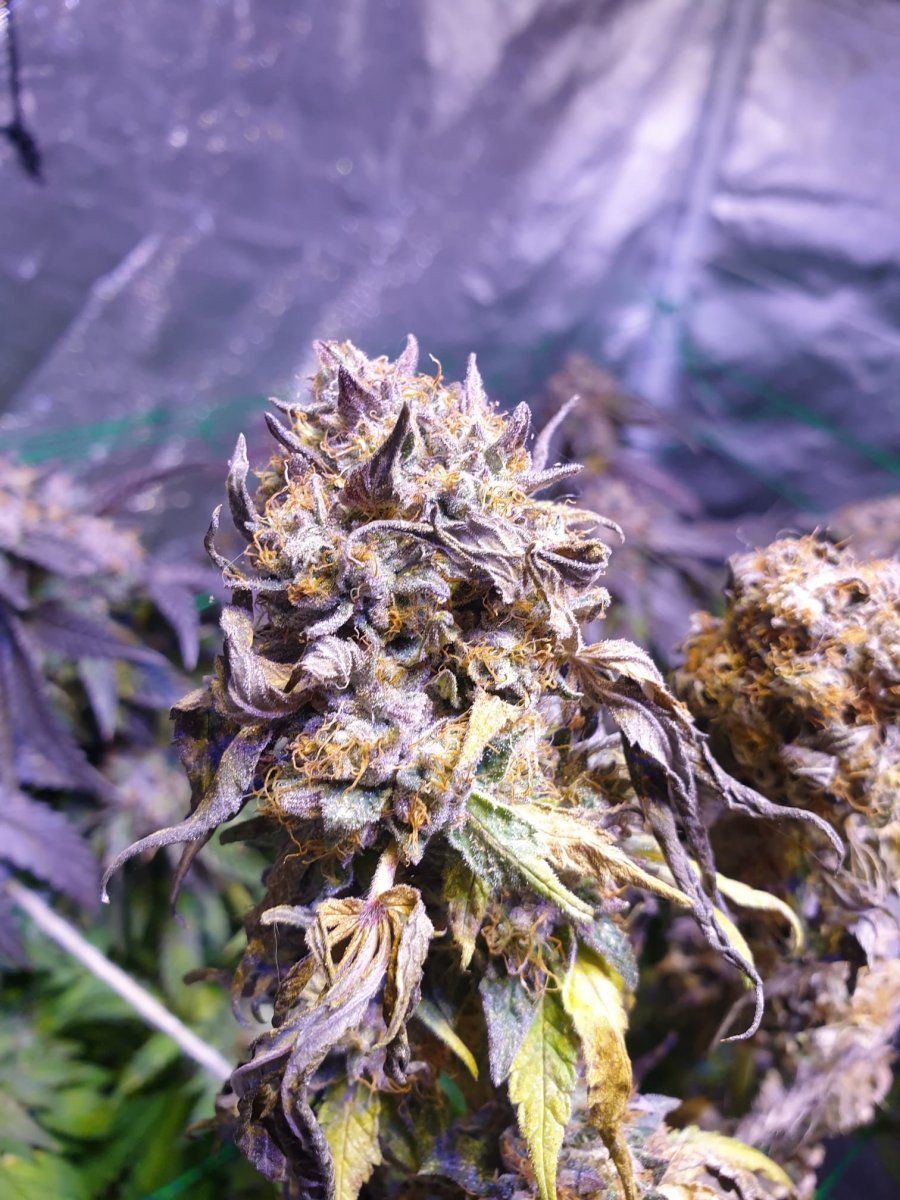 There's some hairs on the buds, I don't think this is evidence of spiders, I think either cat hairs or off the string I used, they're quite thick hairs, thicker than webbing. 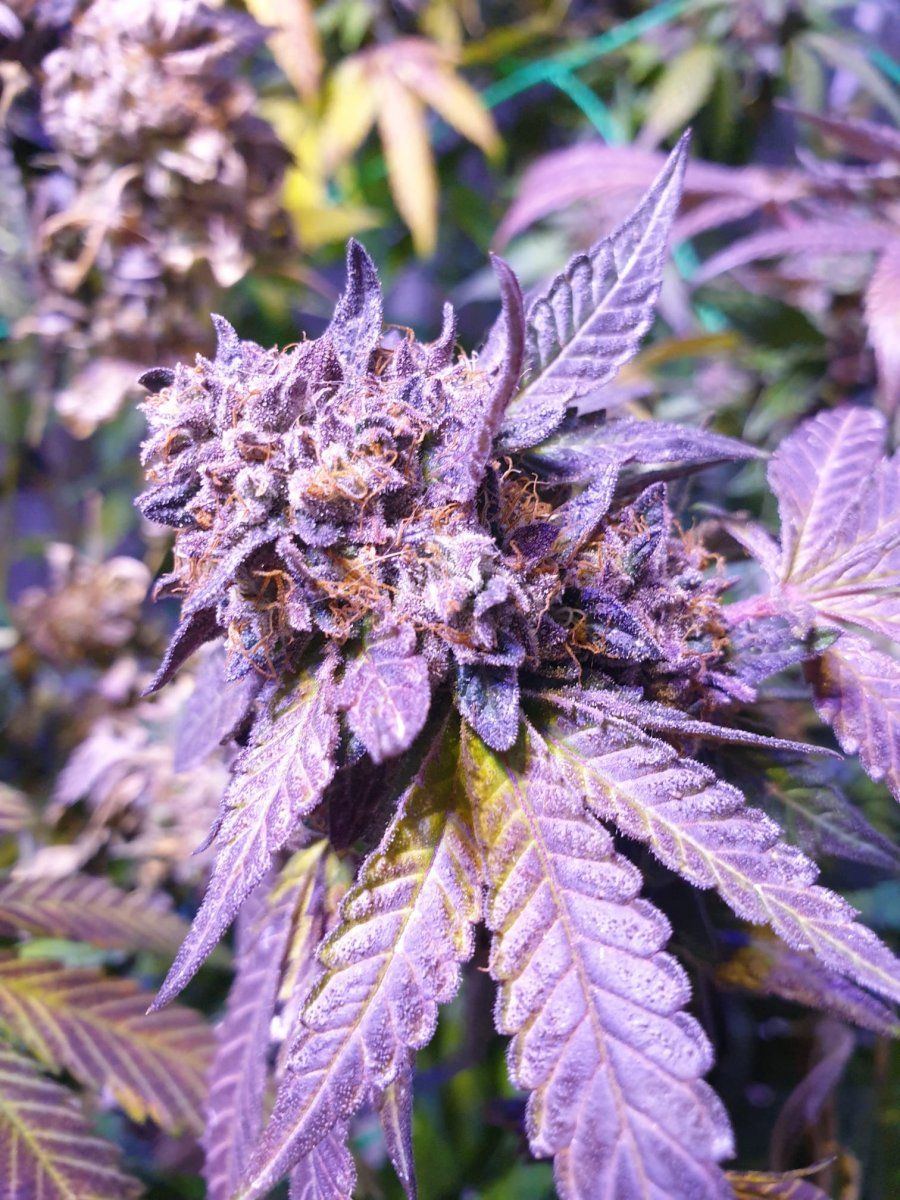 A stem/bud that has dried up on the plant. There's about a dozen or more like this. Mostly in centre directly under the light, but a few smaller ones at the back of the plant, lower down. 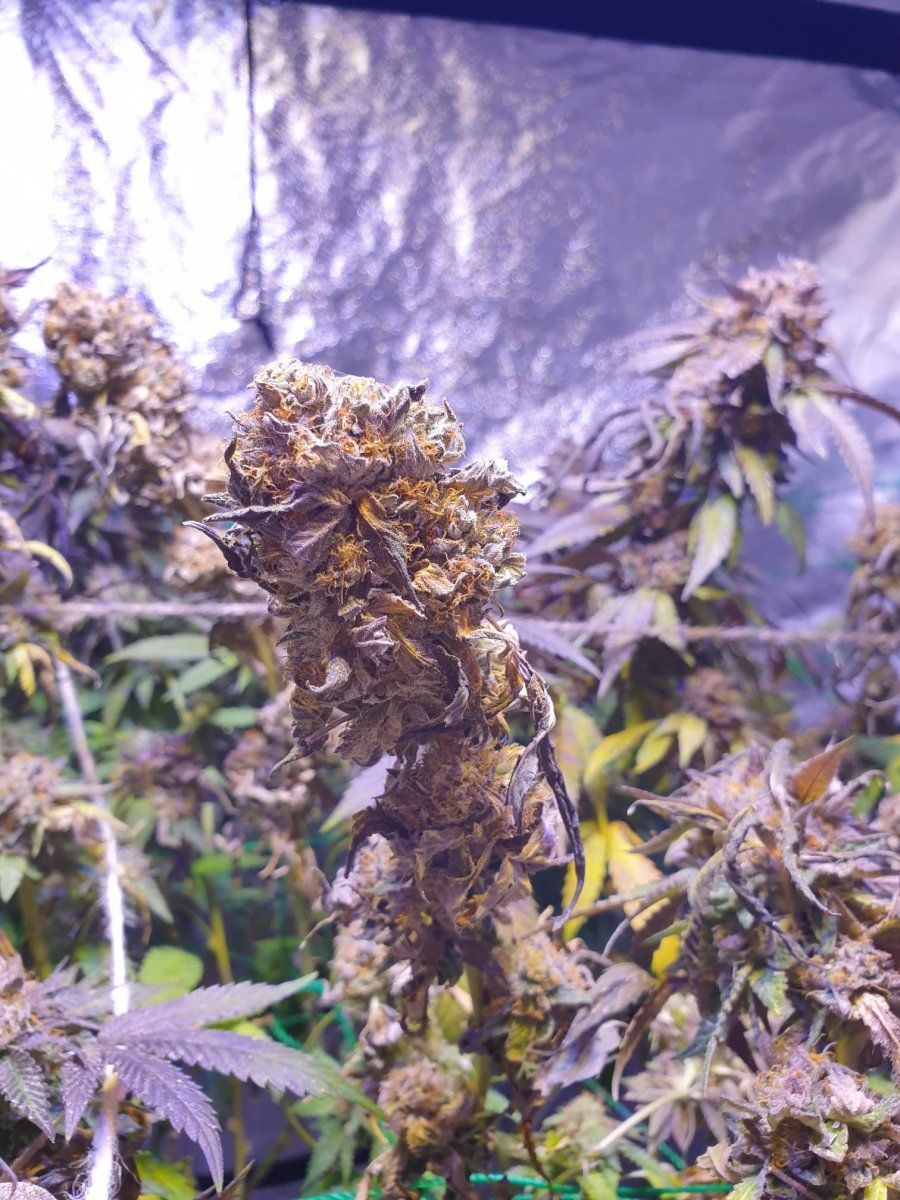 Where you see dying and drying leaves, pry into the bud a little bit to see inside it. You'll probably see some rot from bud rot mold

Theres a cobweb on the last picture on the top of the bud.... or am i fuckin buggginnn

Here maybe @Aqua Man will give you a hand since its coco... but I think I see webs and not hairs.. Whats your humidity? and temp?

Chop. Cure. Smoke it. See how it is. She is done with tent life.

Humidity is around 35-45%. Temps around 24, but as said above they did get very high, around 35⁰ as heater controller failed.

Had a closer inspection re: that web... yep, found a fucking spider mite on a bud. Had a good look, some very fine webbing in a few places but found no other mites. There are obviously more, but I don't think plant is crawling with them... so not sure if that's what would've caused drying buds? I've ordered some of the predator sachets to hang up and I've just chucked a load of diatomaceous earth over the top of the coco coir. What else can I do to kill them off at this stage of flowering (right before harvest)?

Custom45 said:
Humidity is around 35-45%. Temps around 24, but as said above they did get very high, around 35⁰ as heater controller failed.

Had a closer inspection re: that web... yep, found a fucking spider mite on a bud. Had a good look, some very fine webbing in a few places but found no other mites. There are obviously more, but I don't think plant is crawling with them... so not sure if that's what would've caused drying buds? I've ordered some of the predator sachets to hang up and I've just chucked a load of diatomaceous earth over the top of the coco coir. What else can I do to kill them off at this stage of flowering (right before harvest)?
Click to expand...

Spider mites are the borg. You can blast em off with water. Buy they're just multiplying. They can completely encase entire plants pretty fast. You can if you have CO2 poison them. Turn the PPM up to 10000 ppm. Leave if for an hour or two. And then restore to previous levels. Plants won't die. Bugs and Animals will.

Inside of some of the dried buds. Nothing weird smelling or looking, no powdery mould etc? 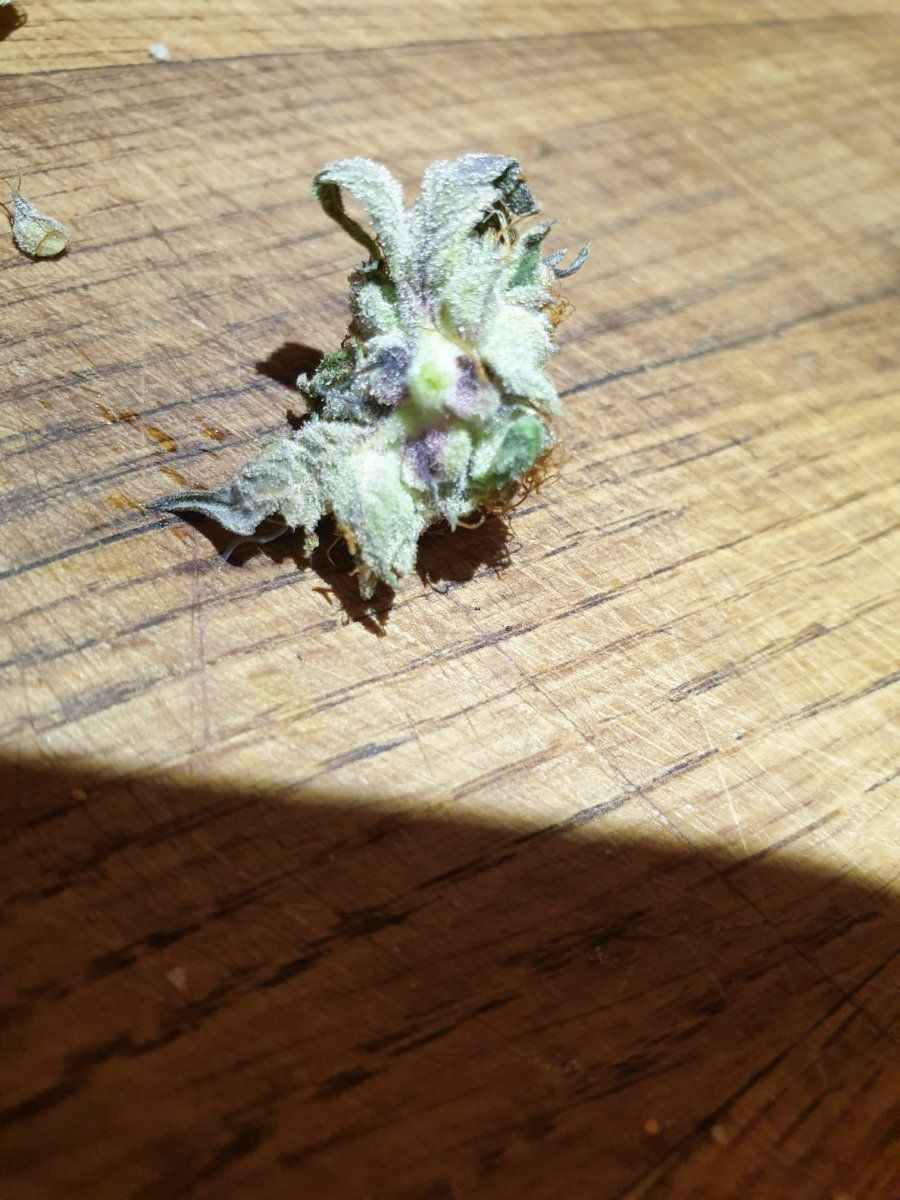 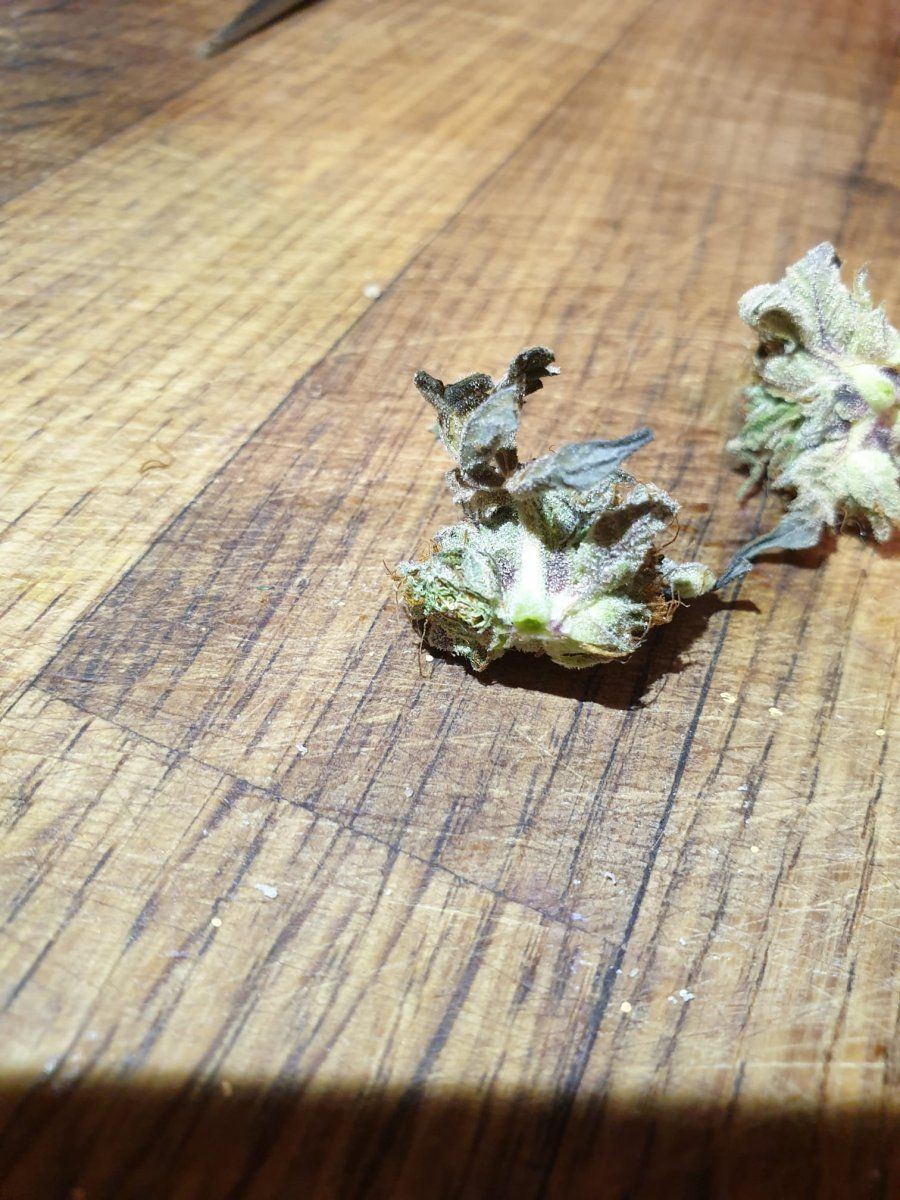 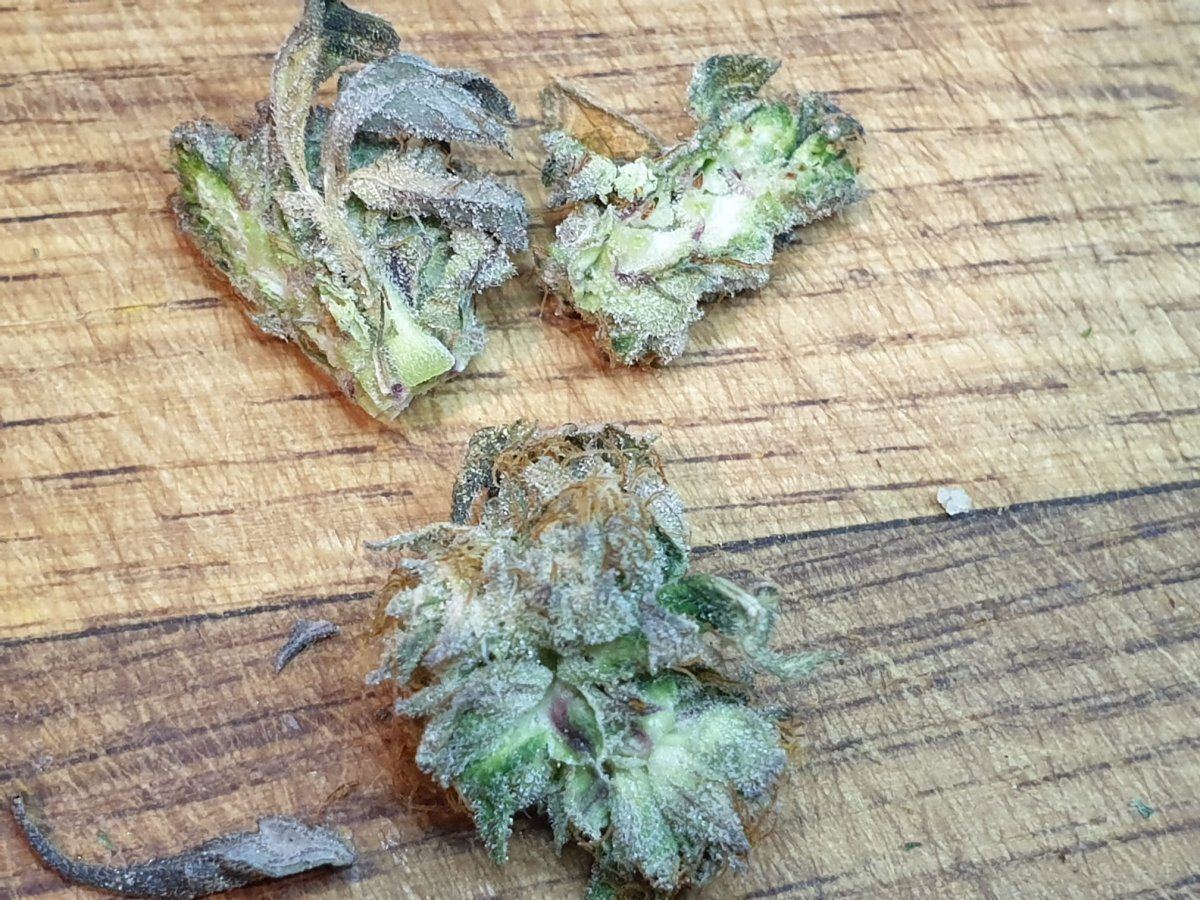 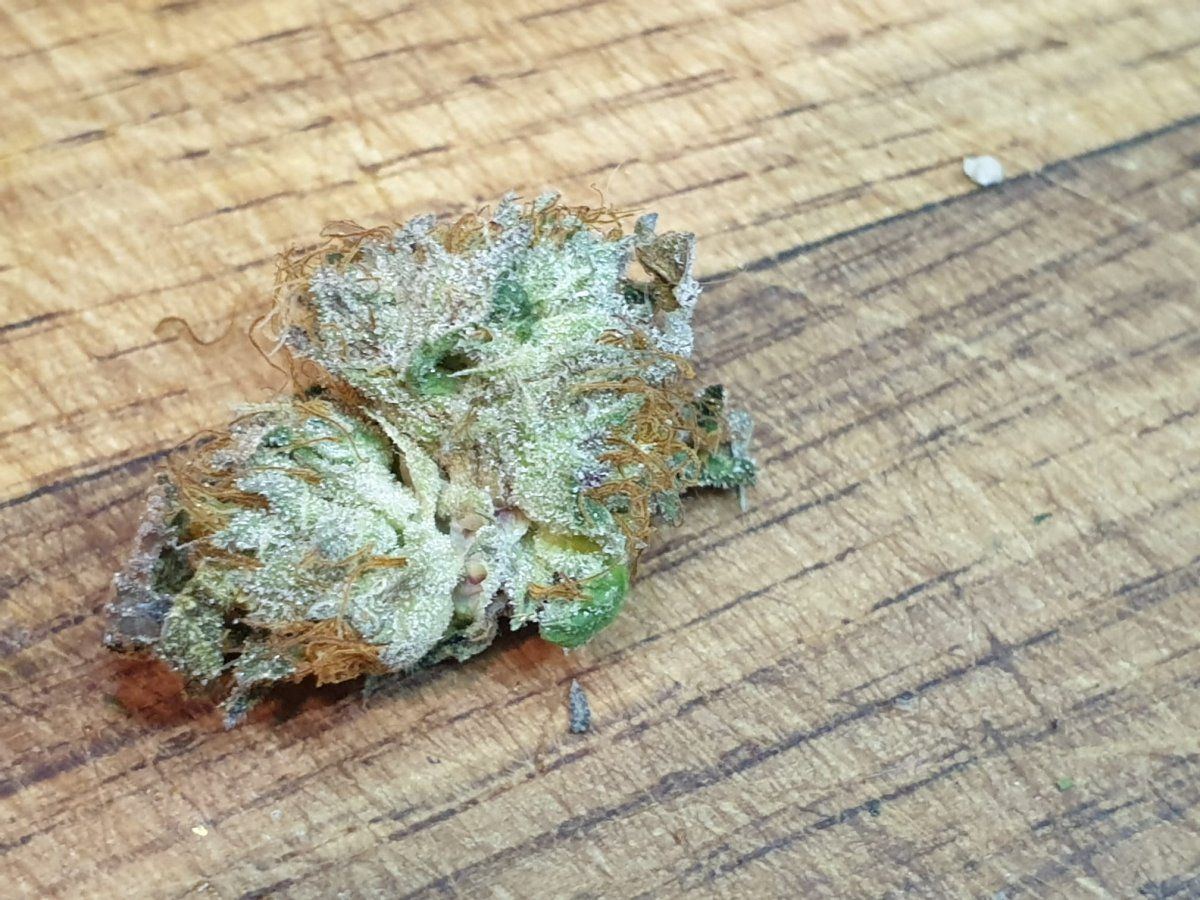 How much longer before the two week flush

Are my buds gonna be OK?

No pistils on buds? Did this plant herm?

Is there any consensus on flushing in coco? When to start flush?
2