Ok you have all seen my 2 toof decay plants, gonna buy more of that for shure, gonna chop next thur on the full wolf moon at day 77, allready flushed but my rh is low so i will still have to water, anyway here are a few pics of critical at day 19 and red dwarf at 1 week, my rh is real low, plants dont mind but the ones in smart pots have to be watered pretty much every 2 days, the plant in the nursery pot holds water much longer, just saying. Critical is looking ok, got new dirt my hydro guy, he gave me 2 large bags of ffof bc the small bag had thrips, no thrips here, bleached down my grow area with bleach to make shure, never came across those motherf s and hope i never do again, but if i do at least i know a foolproof organic way to kill them without pesticide. First 2 pics critical auto by Nirvana, last 2 is an f2 red dwarf by Buddha, these are a bit unstable 1 was white 1 was red and 1 did not want to flower, so hopefully it will at least flower. Hope you all have a green New Year! Ok moveing along 2 critical day 32 starting to flower, red dwarf 20 days old and behind thats why i allways say grow 1 strain at a time, pic 1& 2 critical by Nirvana pic3 & 4 red dwarf by Buddha. 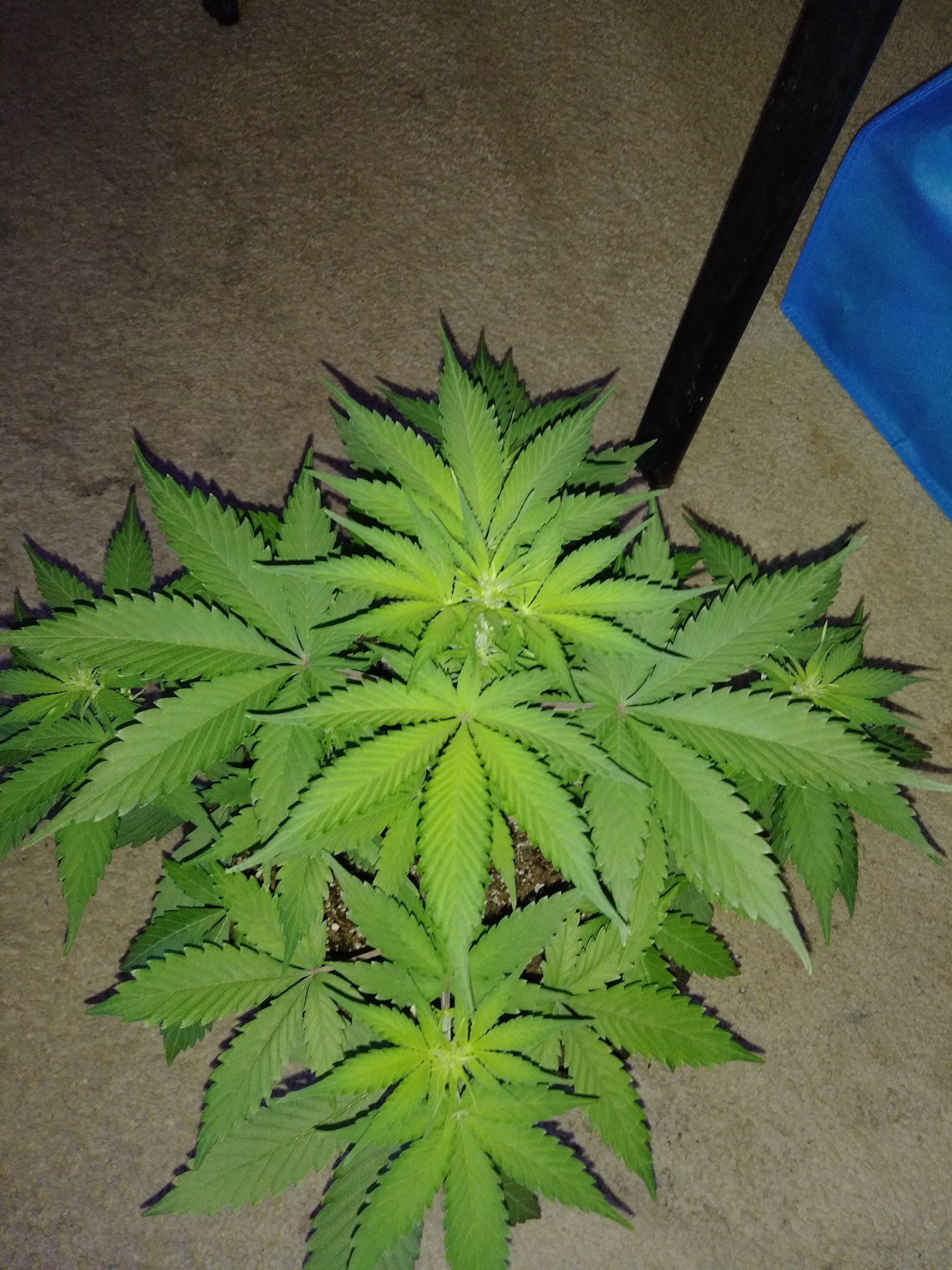 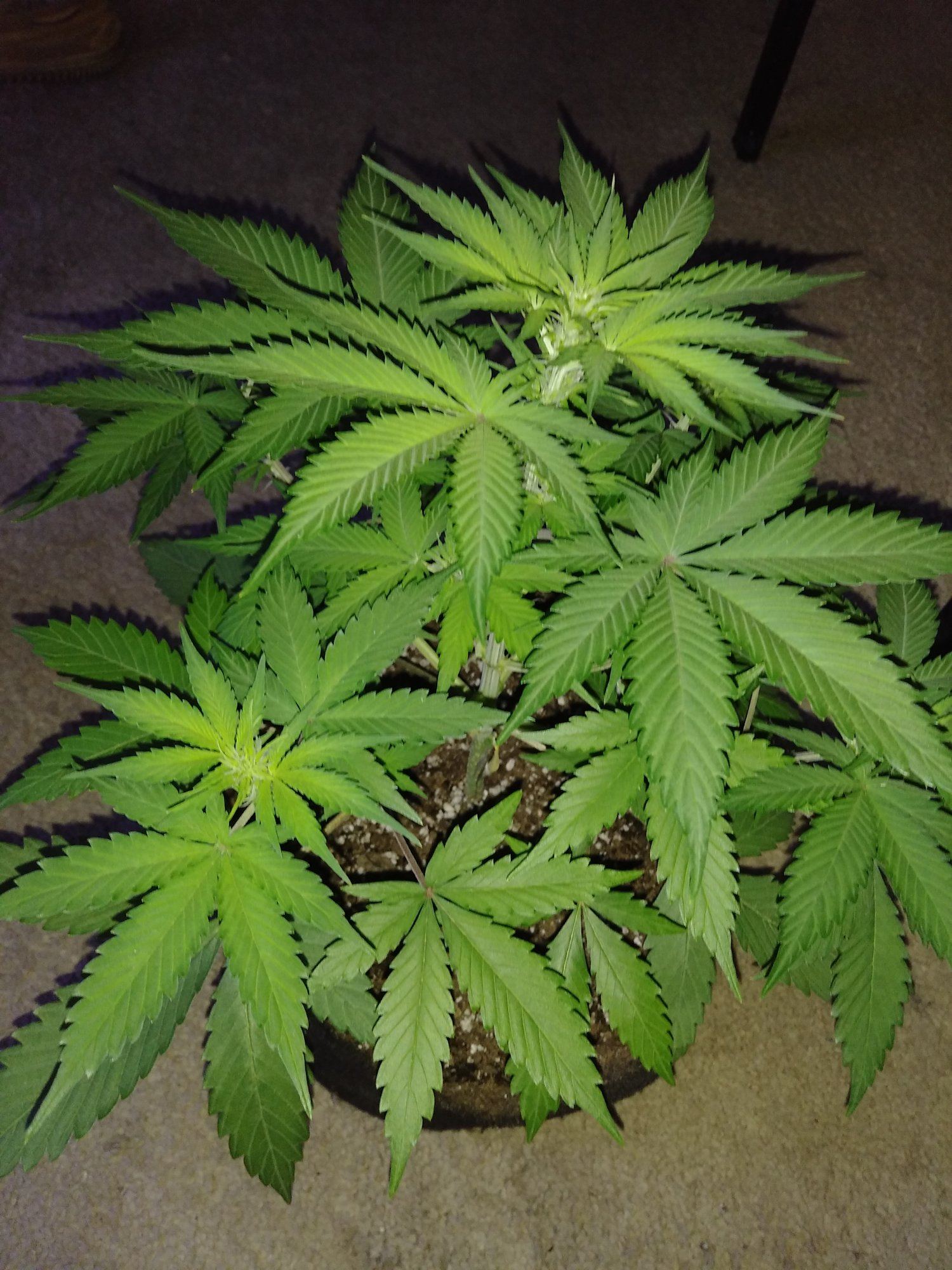 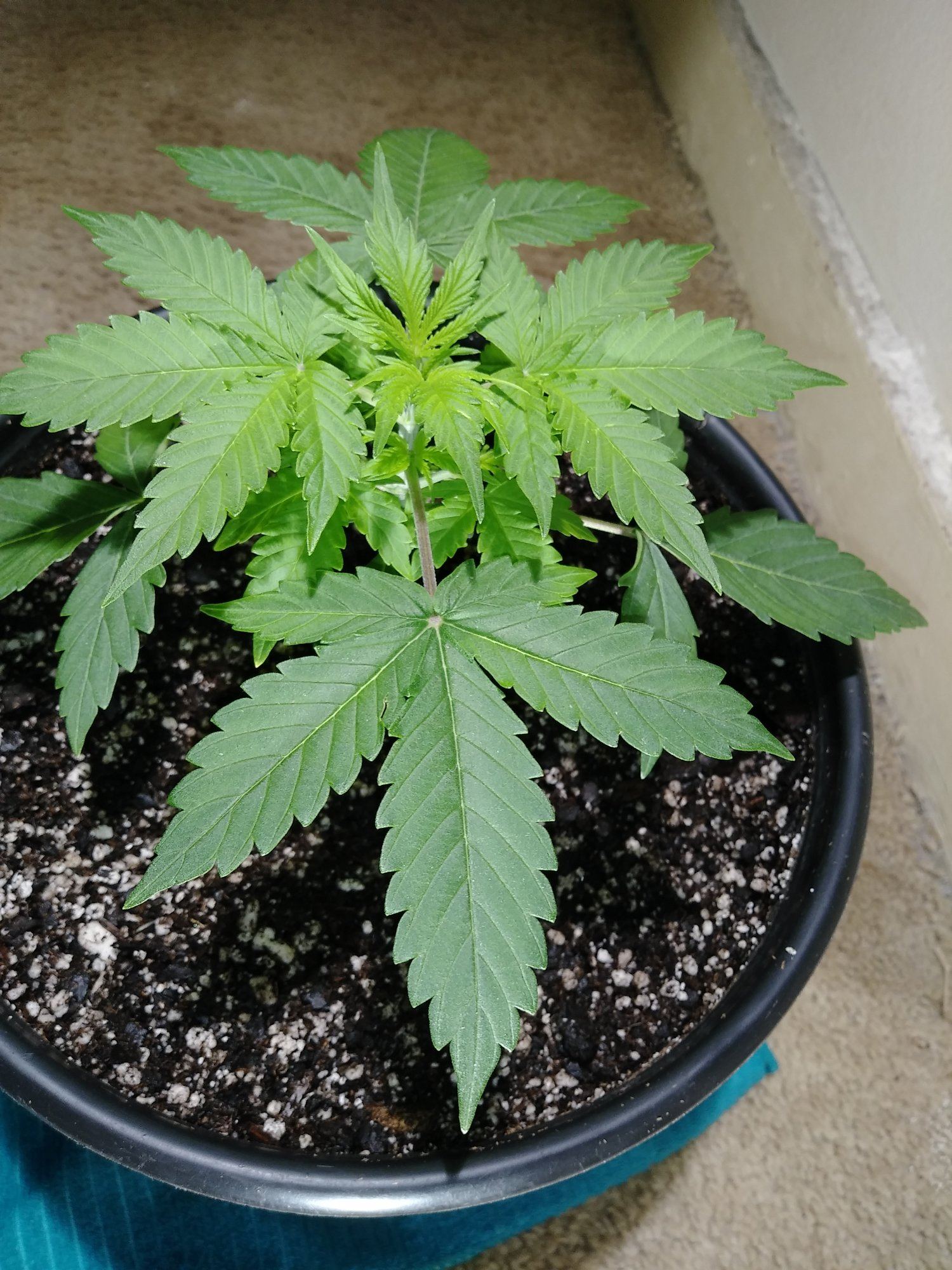 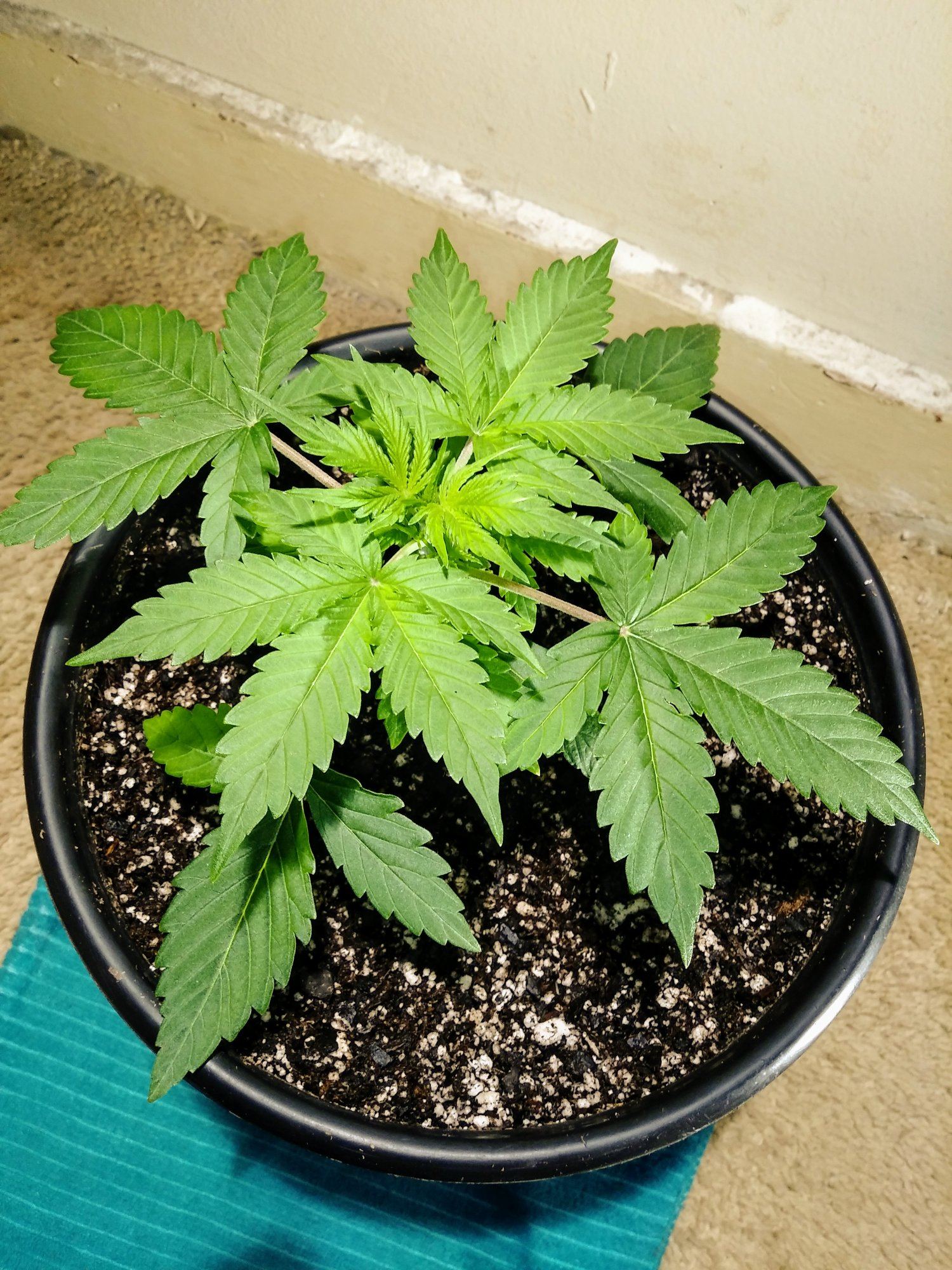 Ok, my 3 critical plants are now under my booster at day 55 and are being flowered, i will say this is the 2nd time i have used nirvana, there plants are a bit cheaper and they do what there supposed to, good germanation rate, but they use allot of rundelis 10%, were as other auto breeders use 3%, but still they would have been bigger if i had enough dirt to get them in 3gal pots but aside from a bit of pruneing and some training there arllright, the last 2 pics are red dwarf at i think 34 days still in veg starting to flower. 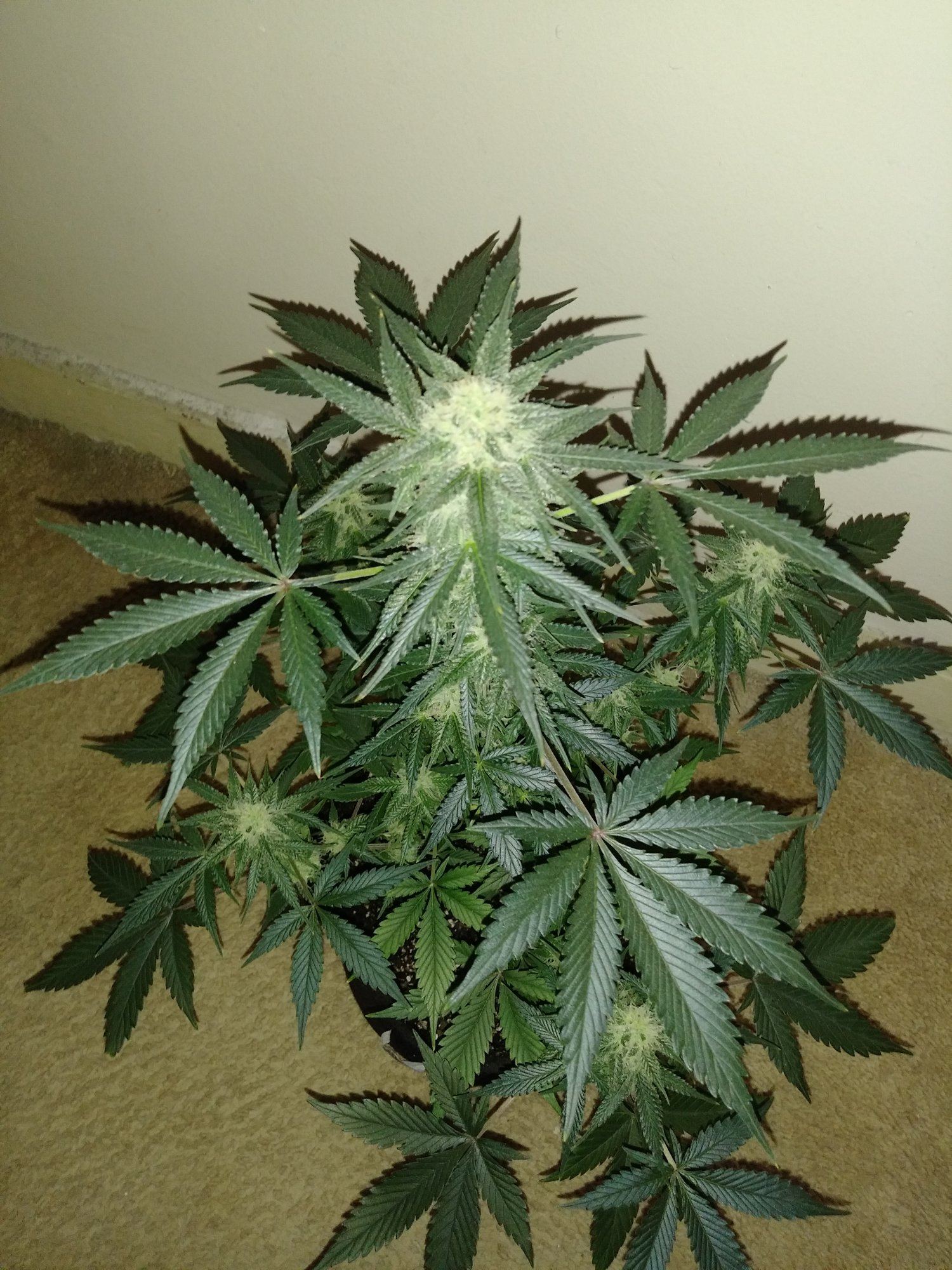 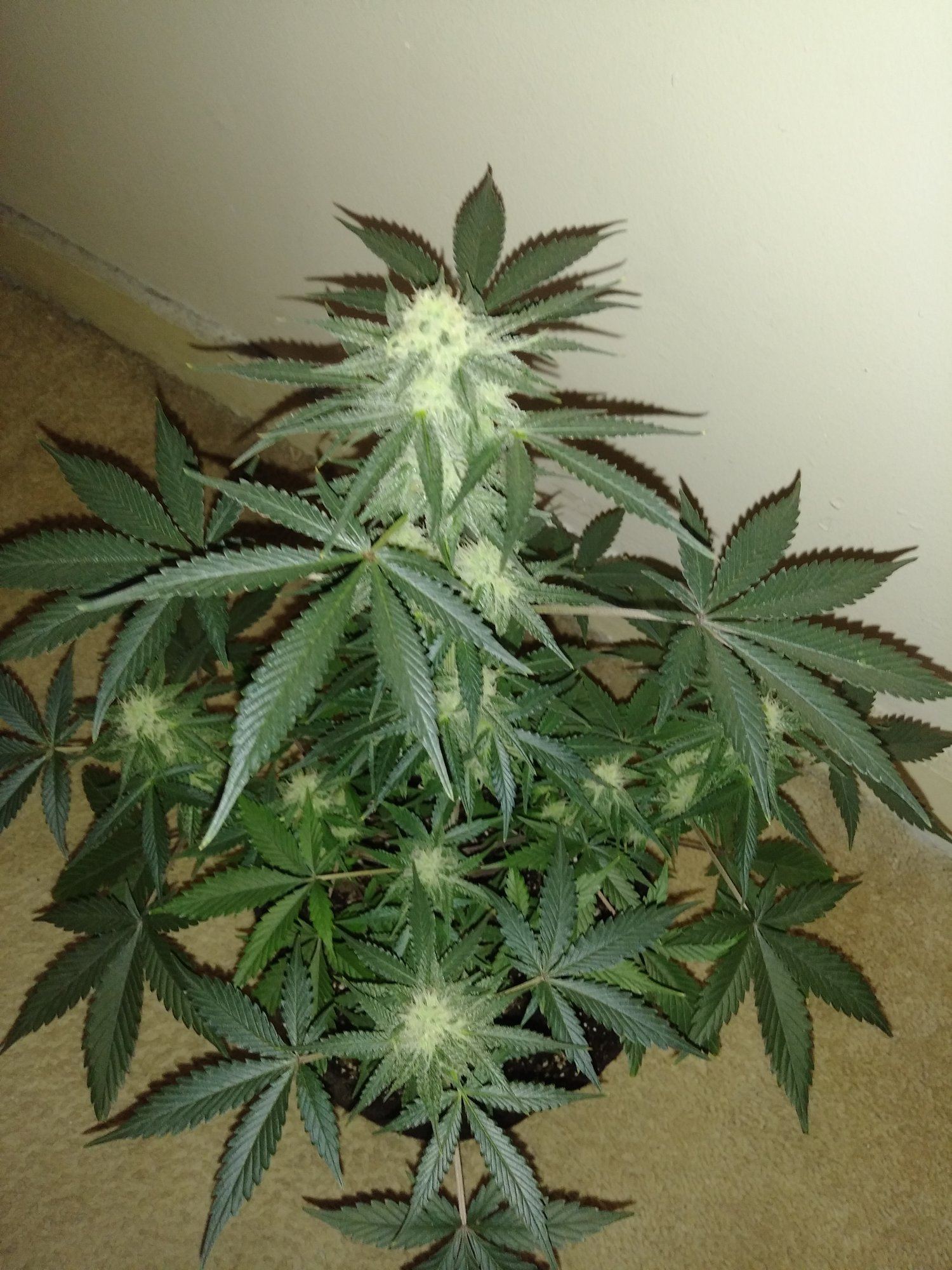 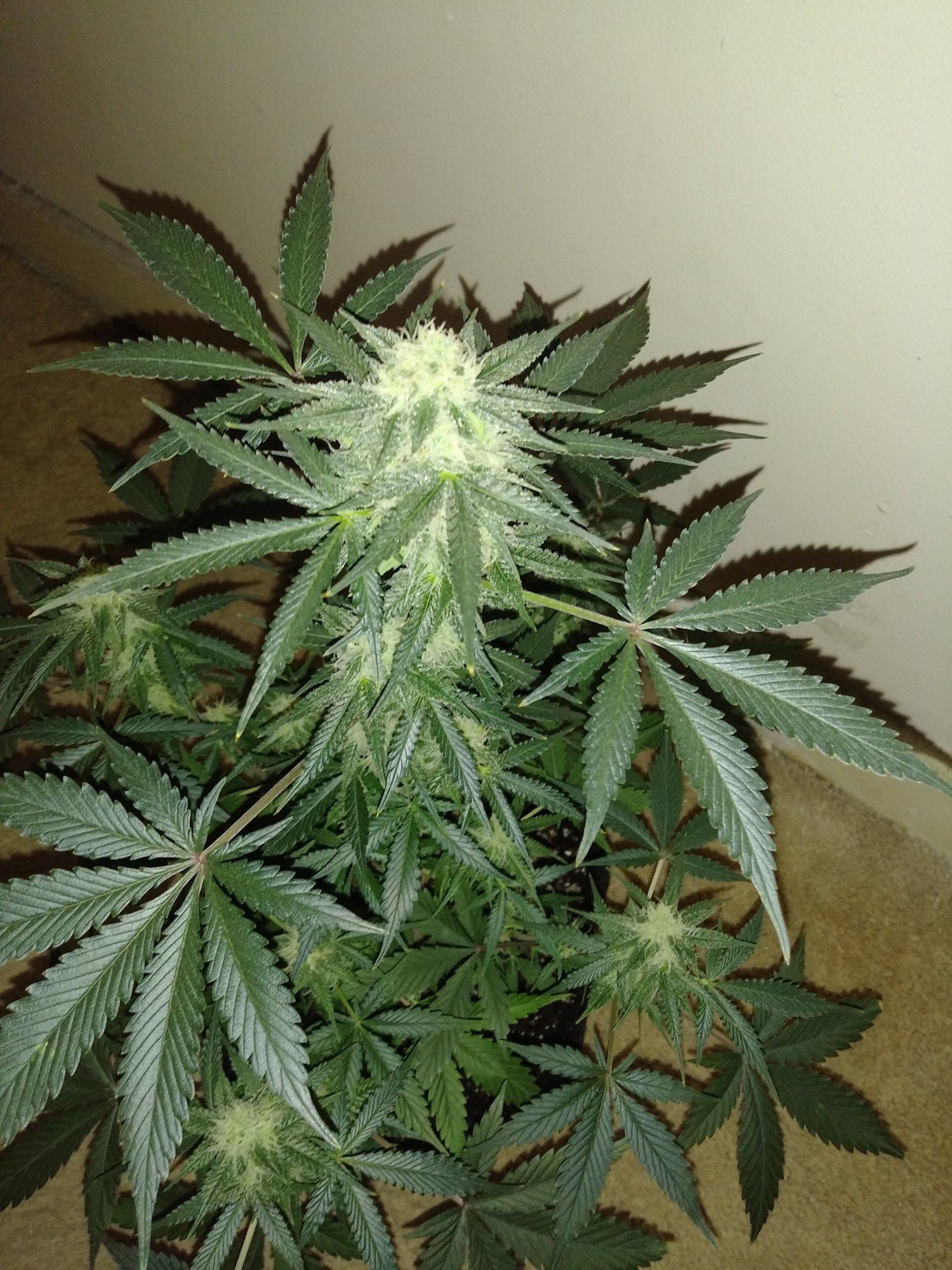 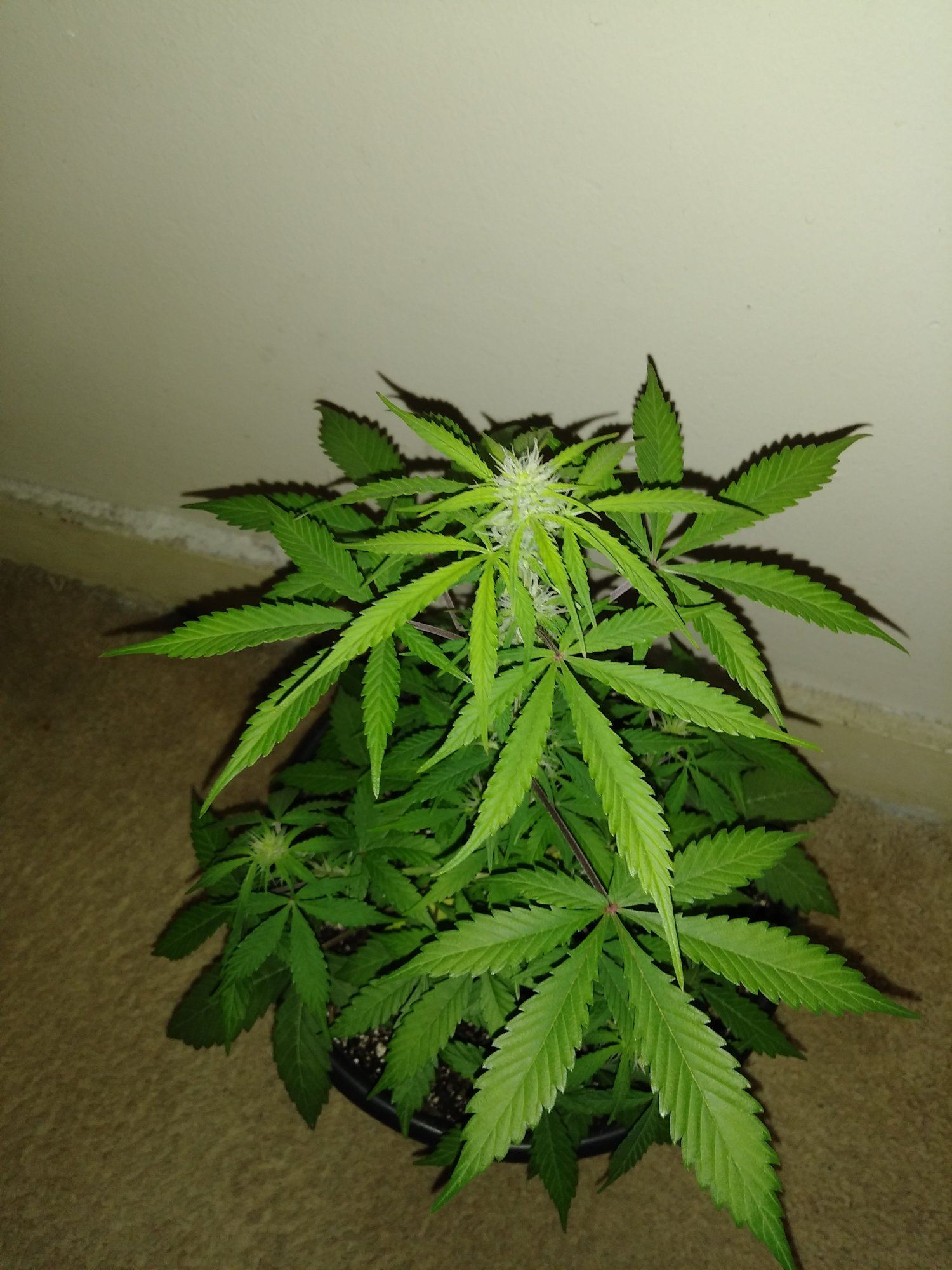 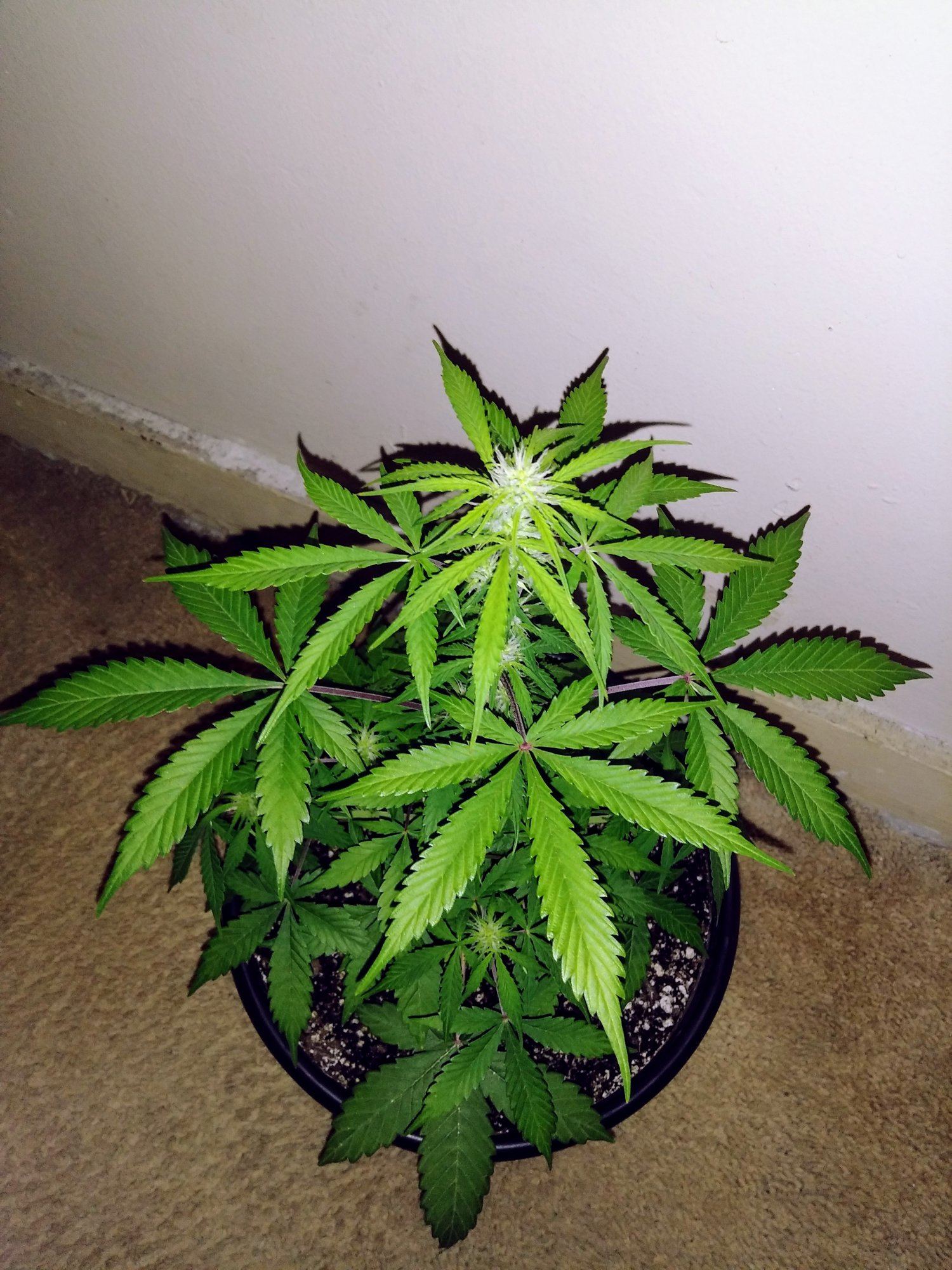 your grows are phenomenal !

I wouldn't go that far but thanx.

First 2 pics red dwarf at day 63, last 2 pics were the critical, up next as soon as my apt gets inspected fantismo express a sativa dom auto by Methisto. 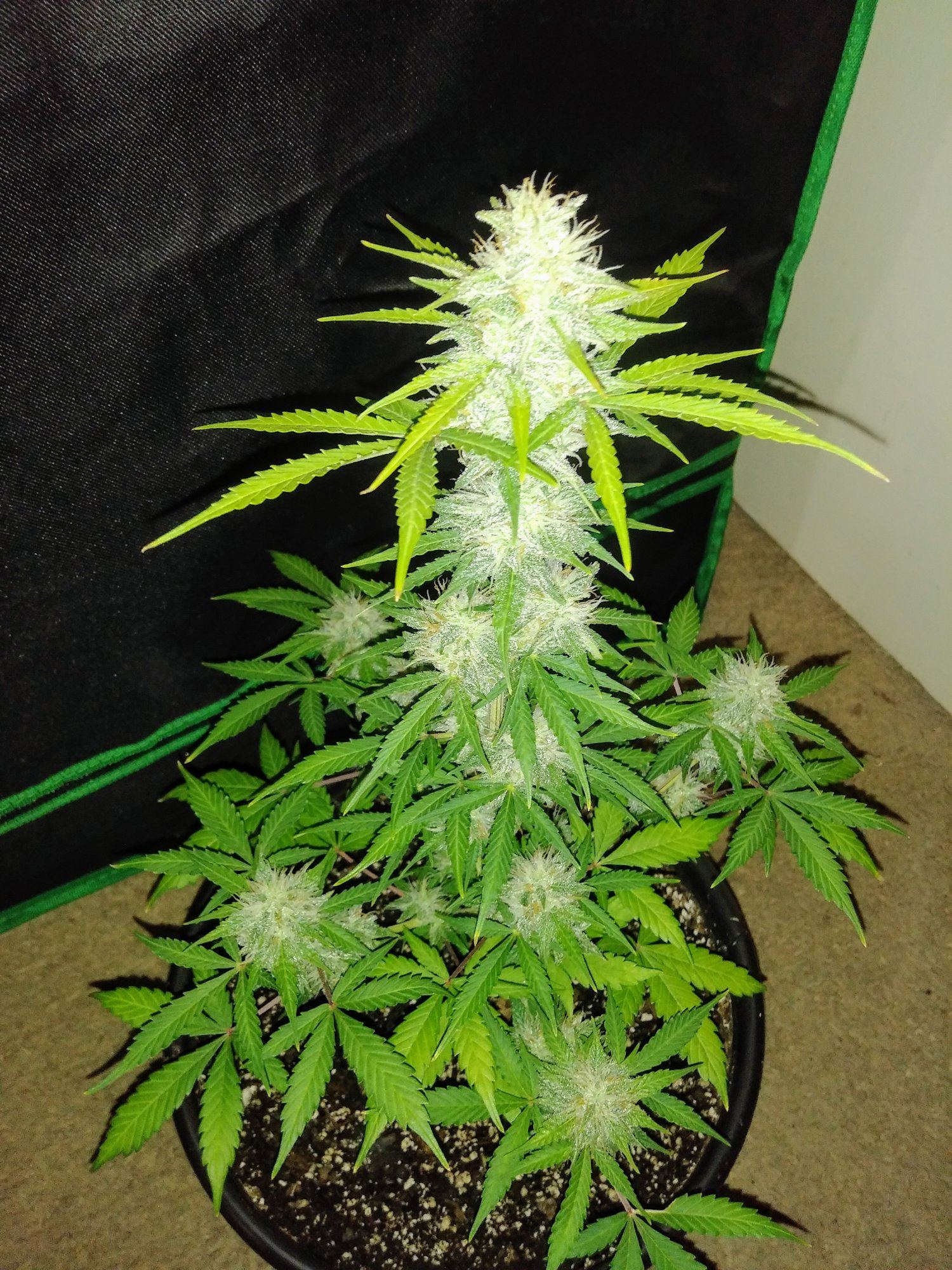 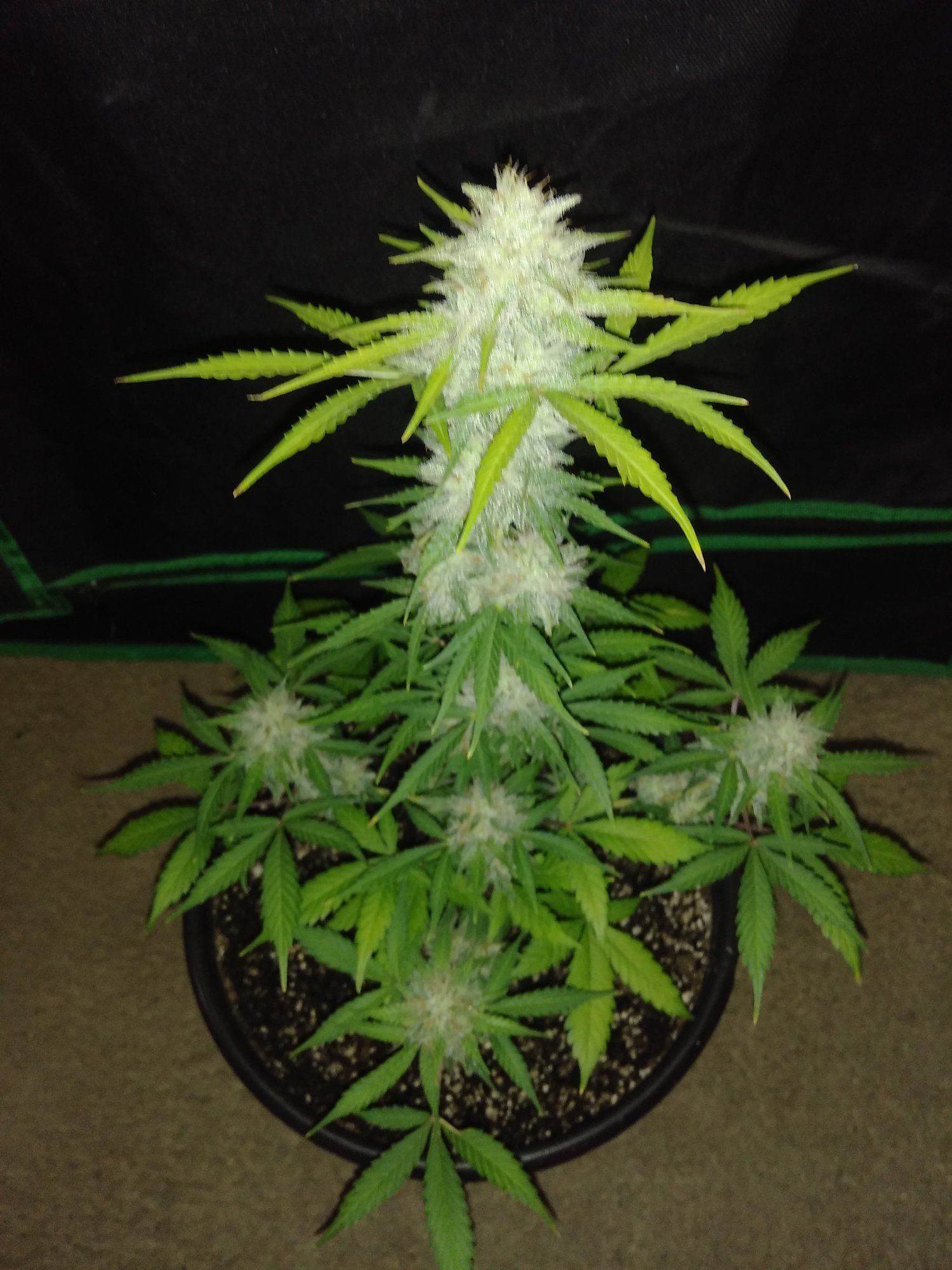 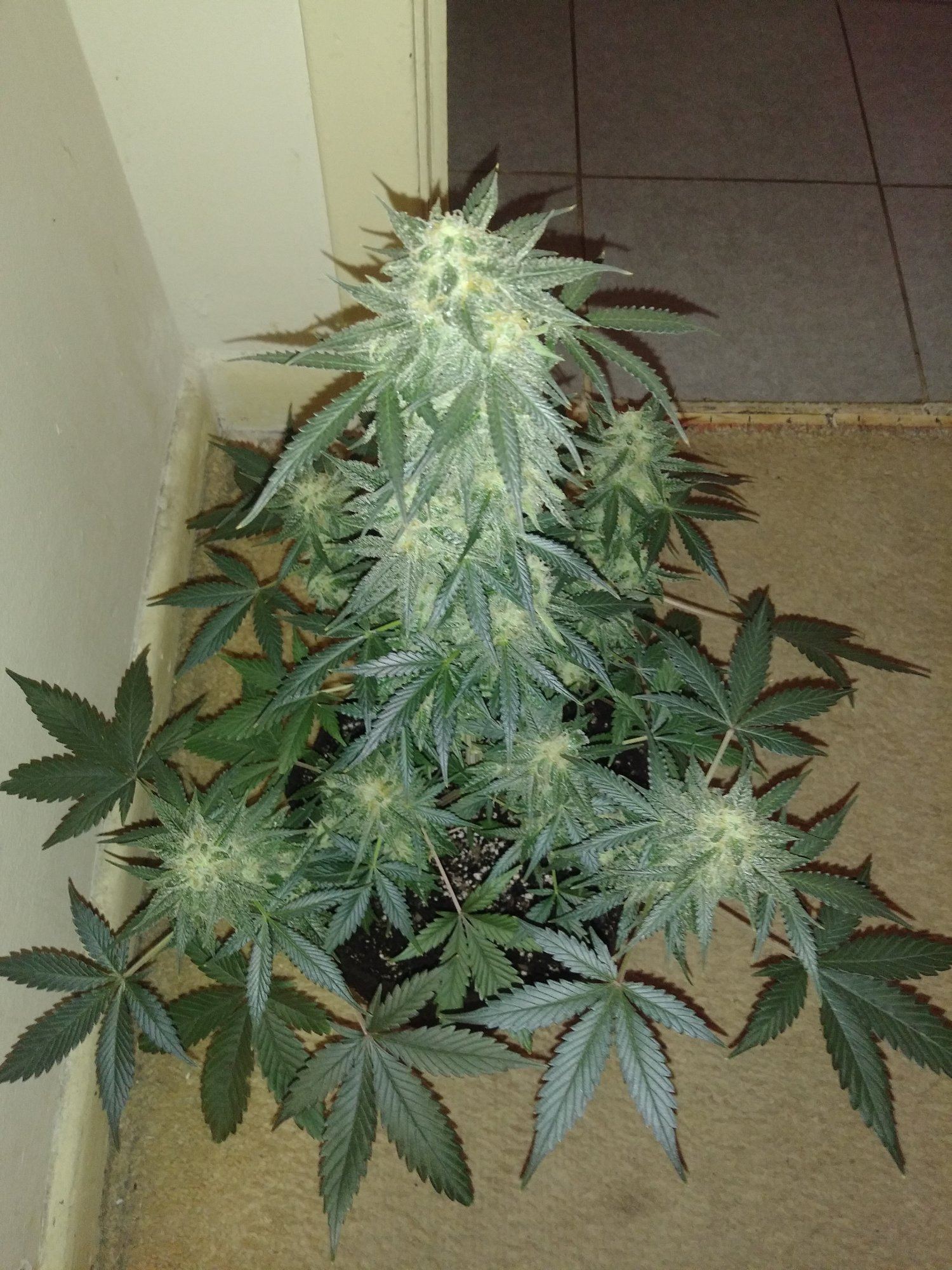 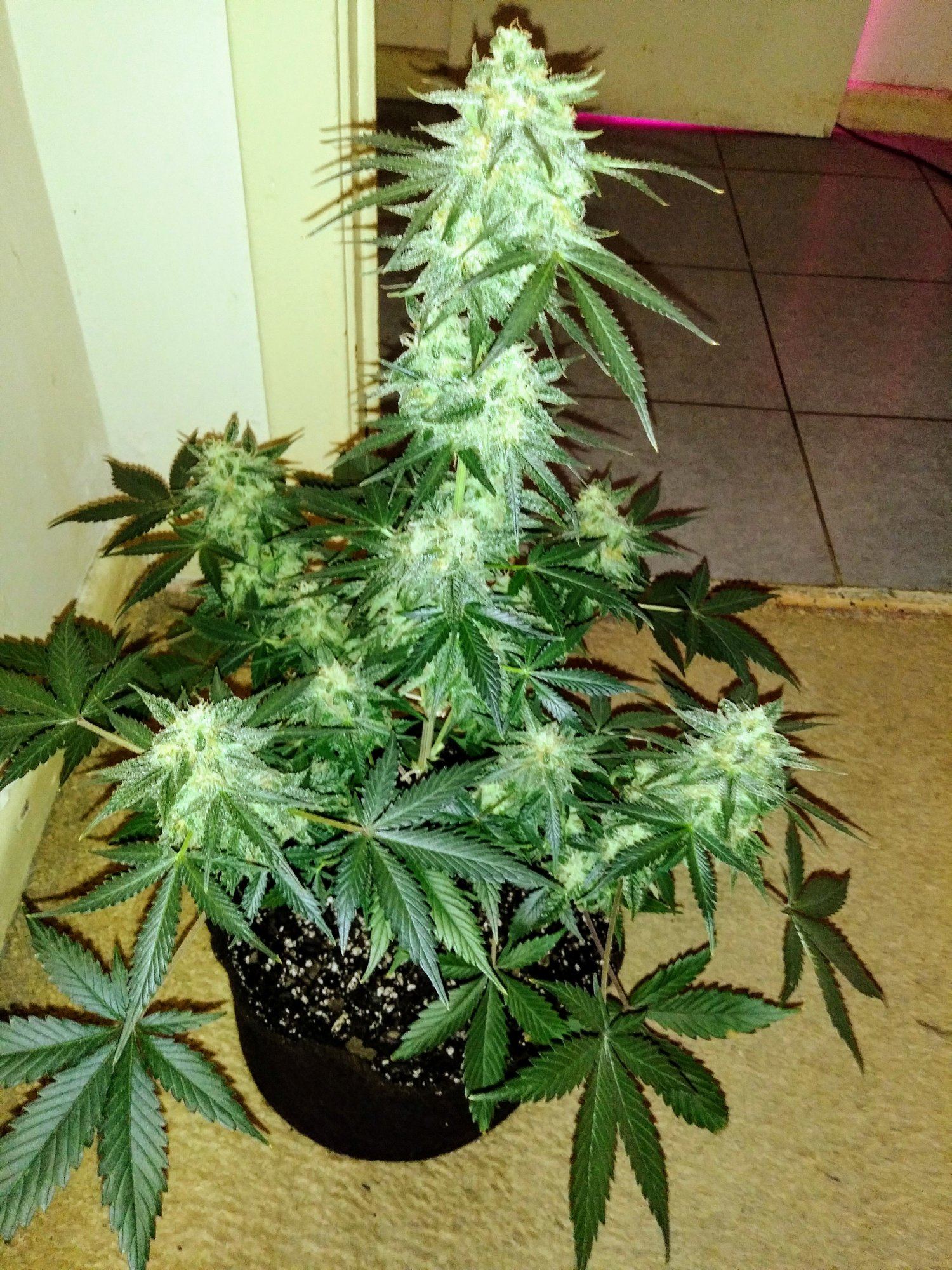 Nice lookin ladies!
So I know I read you grow auto for a while now, what makes ya run the autoflowers vs. photoperiod? Just curious, my tent full of autos

Bc i live in an apt building in the middle of a city in a state where cultivation is illegal, cant get plants outside though i do have extensive experience growing outdoors, autoflowers tend to smell less then a photo but there are exeptions but at very least smell for less time, so for 9 years june i have been growing nothing but autoflowers, i have grown many strains by many breeders but have a good system down in 9 years i have not got caught, while my state does have a medical program and i do qualify i refuse to pay $50 an 1/8, if i could grow my 6 plants like most states i would grow photos but the state forces you to buy from them makeing millions off the misery of people, allso i dont smoke all day just at night so my needs r small and if by some chance i do run out of weed i can get a 1/2 oz for $90 of very good smoke, i just enjoy growing is all and it did take a bit to figure out autoflowers but i have them down cold. Cheers

Kinda In The same boat, I just smoke a lot. My state is the same! The expensive med dispensary here seem to be driving black market prices up well, I also grew outdoors for years then I moved here, love the sunshine! Wish I could use it! Lmao

Same here bro, but here illegal marijuana is cheap and plentiful, i lived in the sticks for years and allways did a grow, got caught in the 90s and did federal time, but my state is being unconstitutional, you can make wine and beer but they force sick people to pay outrageous prices and buy from the state, an up and running commercial grow it is estimated it costs about $4 a gram to grow but they sell u $14 bucks worth of weed for $50, my state is making millions and millions of mony off the suffering of it's residents and they keep there profits secret, fuck that and them!!! I guess u could say im on a quest for the perfect autoflower, high yield, low smell, high test, just got a pac of fantismo express lately i have been running Methisto strains, Sweet has some nice strains, i did find a tiny little breeder called Mdanzig they sell mostly un feminized regular autos, but they do have a strain called sour spyder, i only have 1 pic but it will kick your ass, problem it smells! Bad, real bad, worse i ever ran prison weed to bad. But eventually ill come across something and just stick with it lol good luck bro. Pic is spyder by Mdanzig 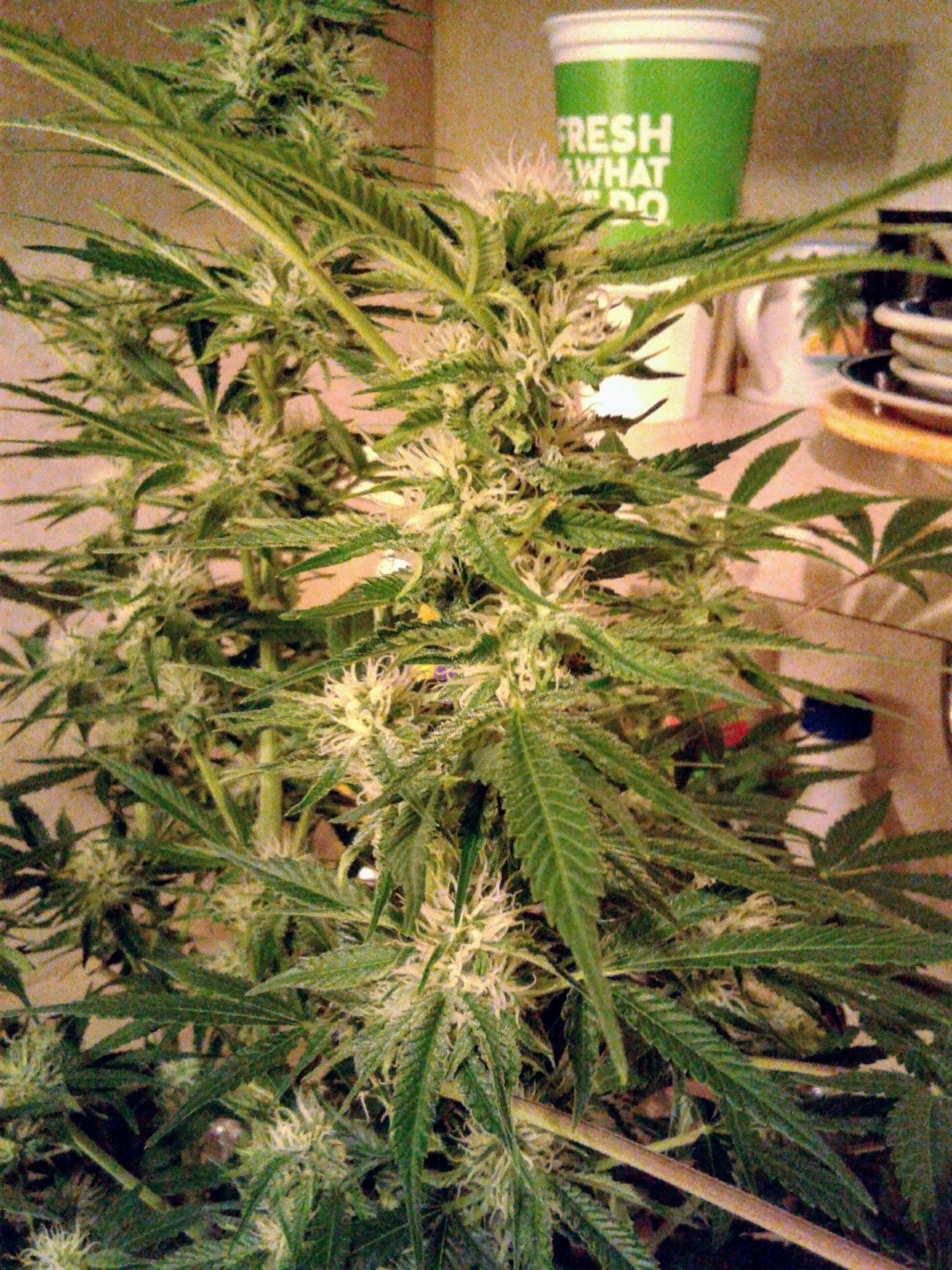 A comment, i used Nirvana 2 times, 1 time there version of bubblegum kush and the critical, had time to give it a good cure bc it's been so dry, you have to be careful or you can over dry, anyway both times all seeds germanated and grew into plants, i brought out some critical with those red pistols and snow everyone luved it, there auto seeds r cheap compaired to other breeders but have small selection of autos, you have to send cash registered to the Netherlands makeing delivery about a month this brings the price to a bit below say Sweet, had i enough medium that critical can be a high yield auto with some very good smoke + bag apeal, not a bad little company just a pain in the ass is all, as for the dwarfs they were dirt cheap bc they r f2 dwarfs, 3 came out red, 1 white, 1 refused to flower, u dont get much but the flower is nice and compact and again the smoke is very good there from Buddha seeds good stealth strain, my last 2 are now turning over another week at most, plants took 70+ days bc i broke my own rule and ran multiple strains and the dwarfs suffered for it, when running autos 1 strain at a time will save u grief, next up fantismo express by Methisto there most sativa auto strain, pic is bubblegum by Nirvana the only other strain i grew by them, will start up new thread for the mext grow, last pic is 1 of the dwarfs finally turning over. 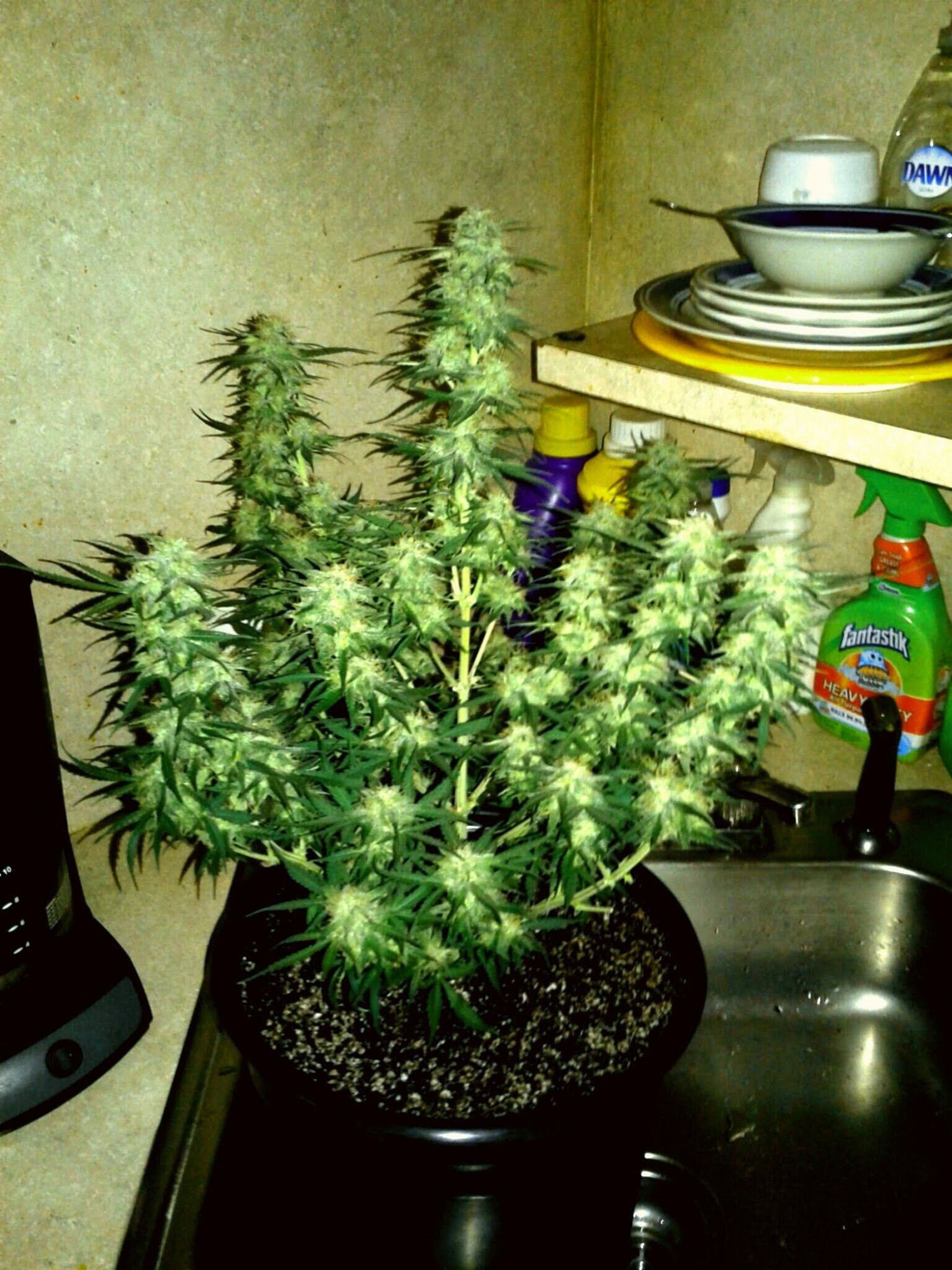 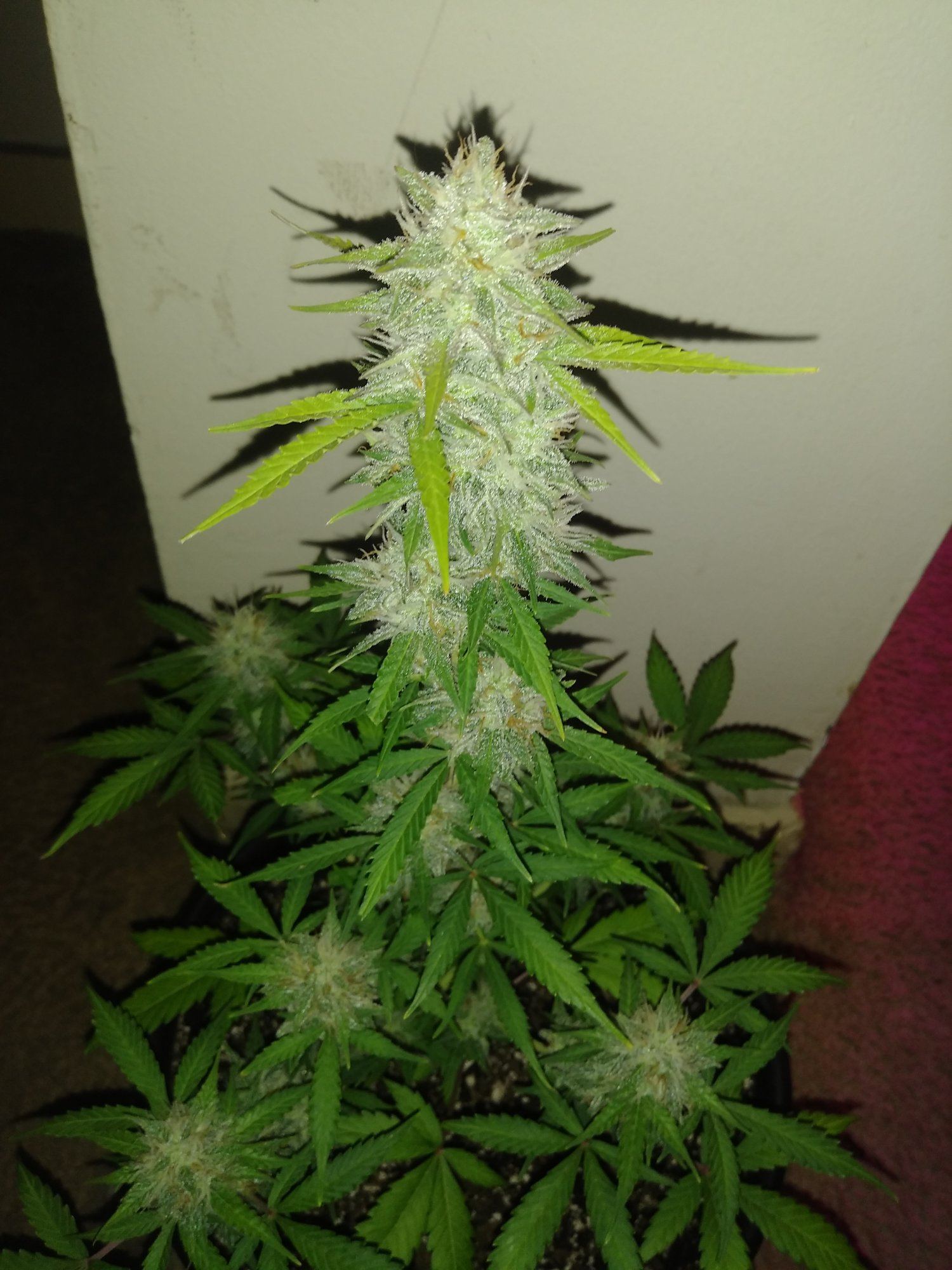 I super new to buying seeds, I just ordered a bunch! No research on breeders nuttin! Lol what a surprise, seedsman seeds worked out well, 00 seeds did good haven’t ran the nirvana yet, but some others with flashy catchy names like fast buds, 420 guys , not so much! Have to try methisto hear good things!
I’m goin I. The right direction just gotta find my path. Lol
My state same way mN cept the cheap black market weed! It’s $200 a zip here for jyst ok bud!

If your running autoflowers, Sweet Seeds & Methisto are great fast buds is ok, Oregon elite Seeds is a really good seedbank but right now there waiting for there spring stock, the American Methisto site is down till Mar 2nd then will re open, Sweet Seeds allso sells photoperiod strains. I do not know what a zip is but here you can get top shelf weed for $200 an oz.

Zip=An ounce young kids usin ziploc baggies , took me a while to get it ! I’m old

To me that’s top dollar, back in MI I could get a ounce for 100$ ,
Lights and tent paid for. I figure my last harvest cost $30 an ounce, that includes seeds, electric, soil, even water and nutes! Plus I know what it is, what’s in it!

True enough, i assume your growing autoflowers bc you mentioned methisto, they are really good but hard to get and expensive, next im running fantismo express by them, did a run of toof decay by them before the critical and dwarfs, it came out realy well with no problem. see pic the dwarfs really frosted up niceley, check out this nug sparkle sparkle lol yea i live in a huge apt in a big city were cultivation is illegal so for the last 9 years i have been running only autoflowers bc they dont smell as bad for as long ( there are exeptions) but you most definitely do not run them like photoperiod plants, they tend to be fussy, bitchy, and notoriously easy to burn, but once you get a system down you can work it so you allways have weed, the one good thing about autoflowers is they use allot less nutrients thus saveing mony, i figured it cost around $50 bucks or so to grow 1 plant, with autoflowers the downside is yield while some autos are high yield the majority are average, thats the thing with them it's a tradeoff speed for yield. 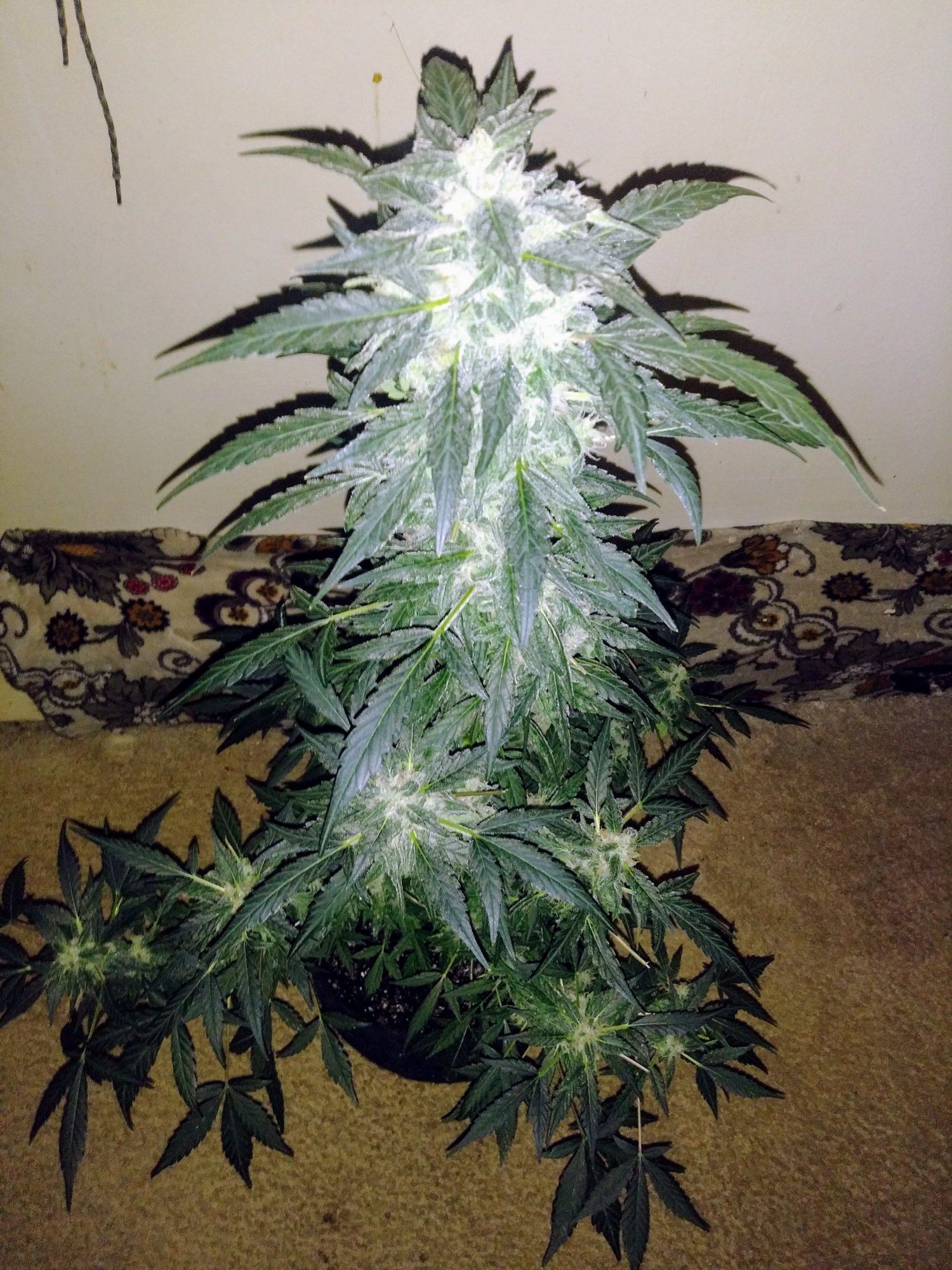 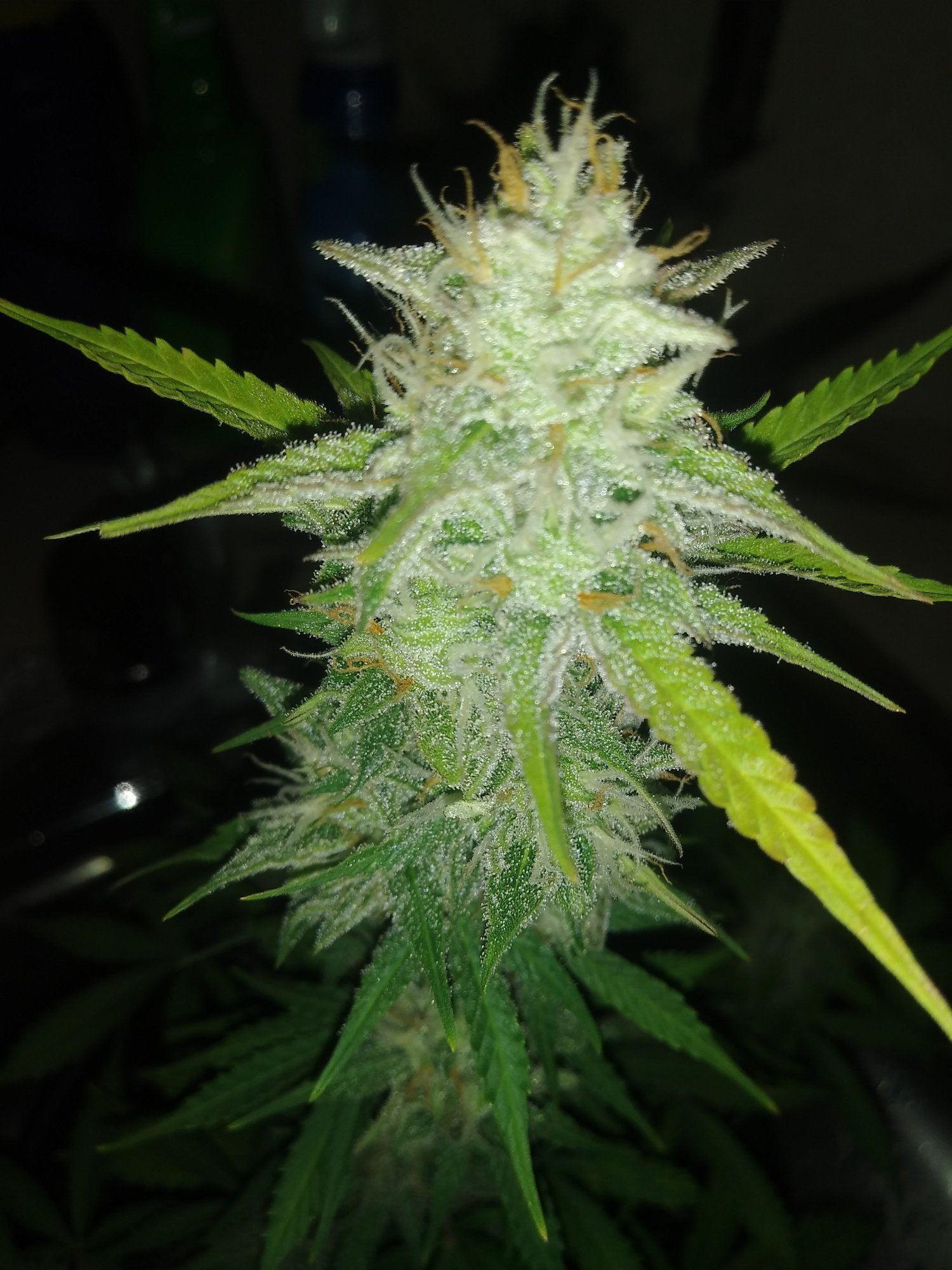 Last pics will be chopping very soon, bud is critical came out very nice and exceeded my expectations as this strain put in a bigger pot can b good sized plants if given enough room, the dwarfs are low yield but the product is very fine really narcotic great 4 sleep, i have to quit for a month or so but up next i may do another Methisto grow as i copped a bag of fantismo express, or maybe some red poison or stardog or pink lemonade i dunno have so many seeds but i want to grow something new. 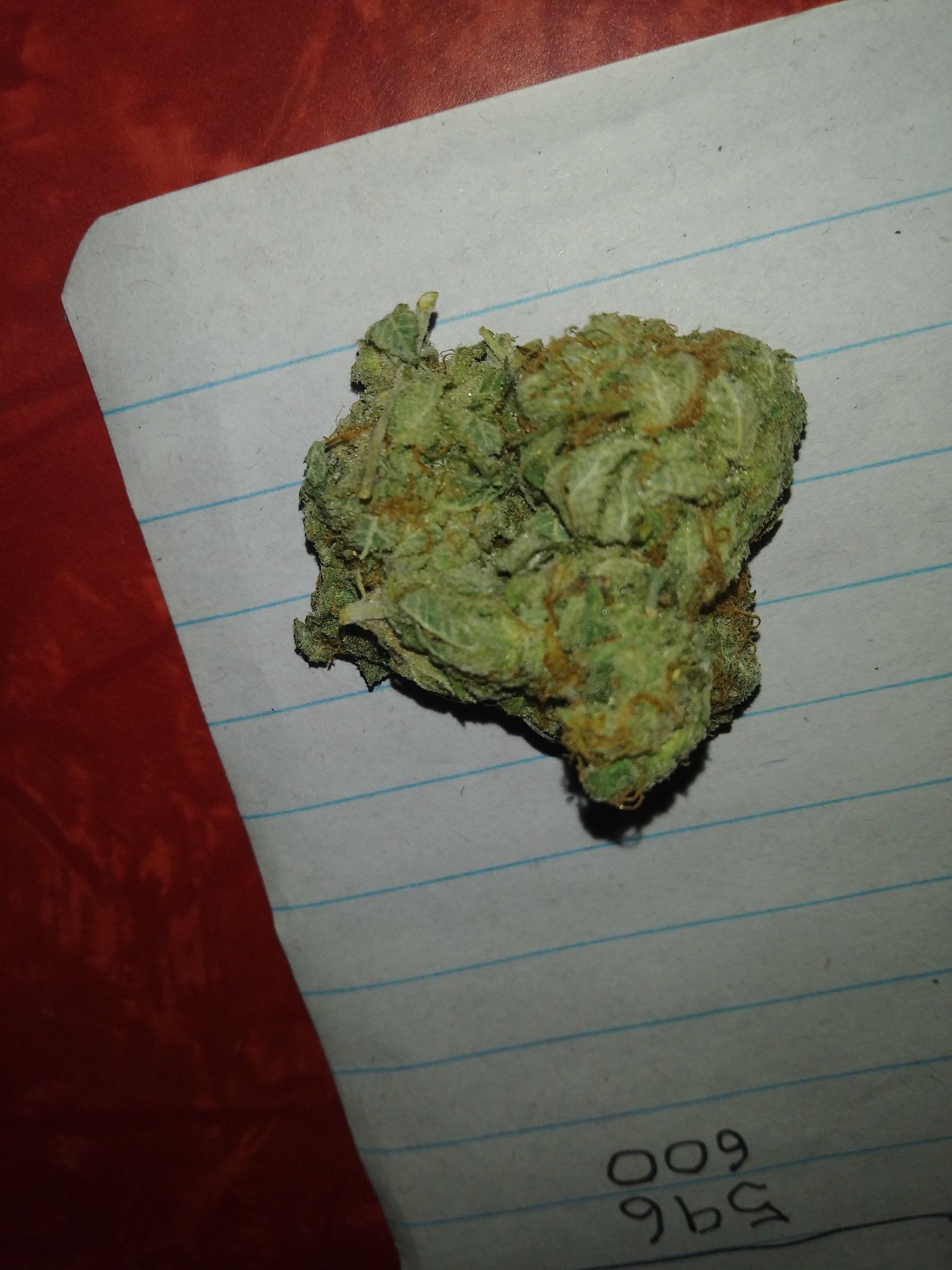 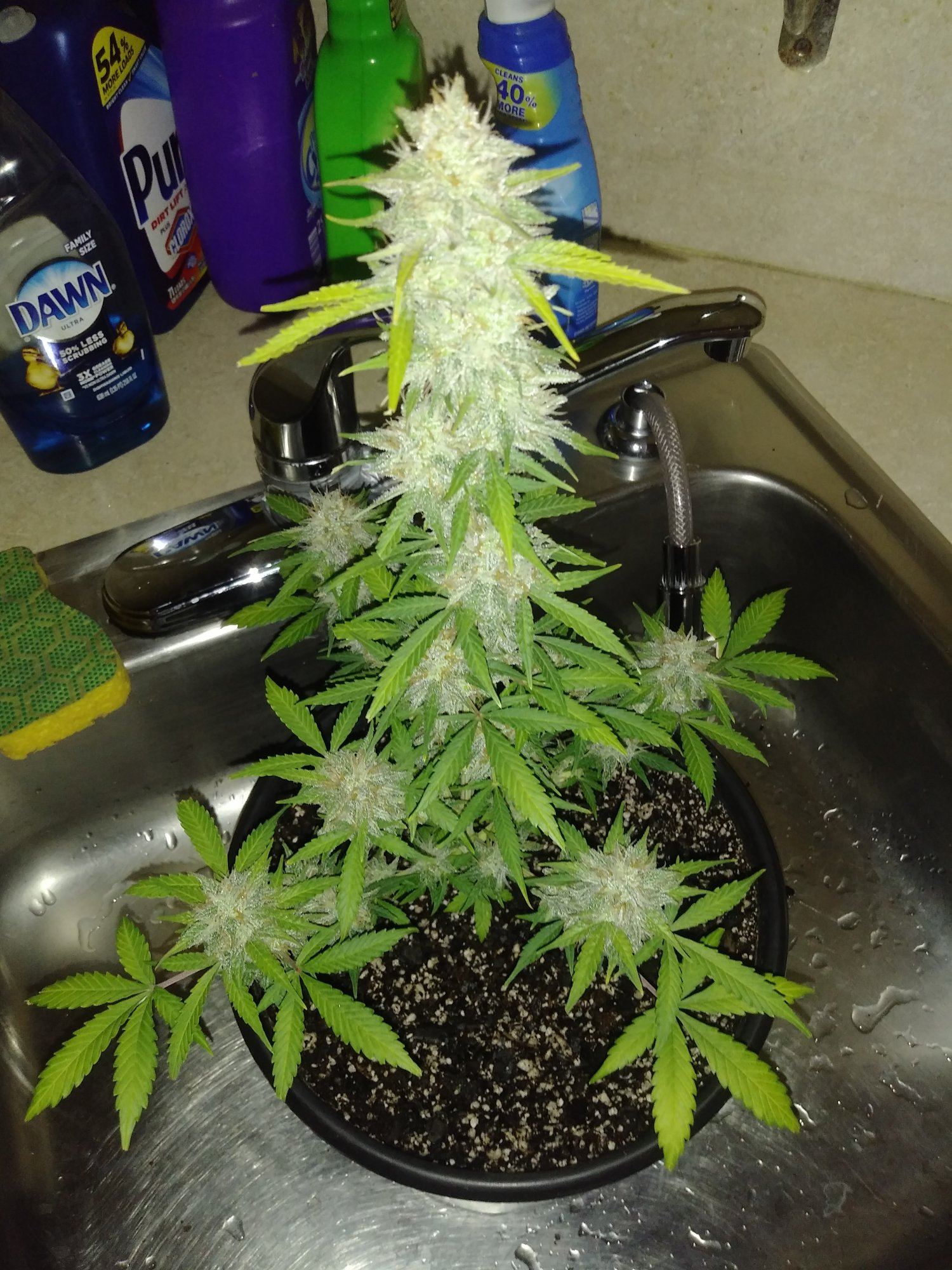 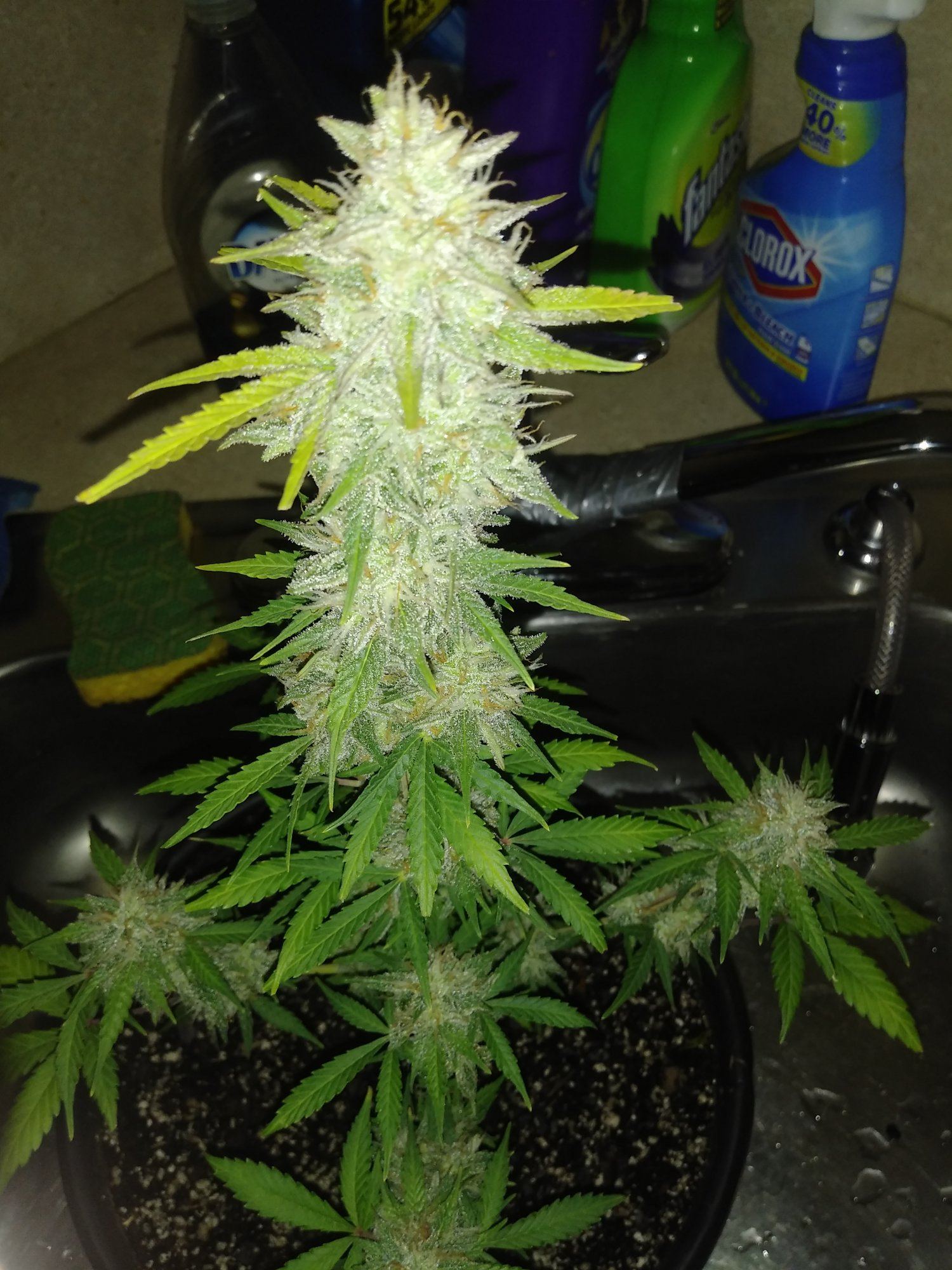 Methisto is my favorite auto breeder, i just blew a $100 at there US store, first my boy sent me 6 fantismo express beans bc US store was closed, when it opened they really did not have allot, i bought a 5 pac of samsqatch, a 2 pac of 4 assed monkey, and a 2 pac of cream de la chem bc they did not have chemdoging, but they allso gave me 2 alien vs triangle × 3 bears and 2 cream de la chem × forum stomper. So they gave me 4 extra beans 4 free a very happy customer want to run samsqatch as they said it's a small large plant that puts out nice weight, got dirt and pots today before all stores close, i would hate to b locked down with beans and no dirt, i pray it does not come to that, i have 18 strains of autos and 10 i never ran so im gonna think about it, to be honest that critical was really good and stupid easy+ bought bigger pots, we should vote lol, ill start up again at end of week.
You must log in or register to reply here.
Share:
Reddit Pinterest Tumblr WhatsApp Email Link