Exclusive: Afroman Remixes 'Because I Got High' in Support of Marijuana Legalization 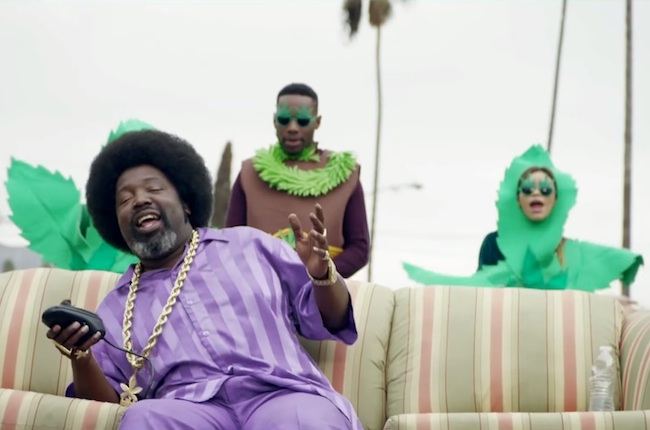 Afroman in the video for his remix to his 2001 hit "Because I Got High."


"There’s a line about anxiety and Xanax and no longer needing to take presciption pills, and marijuana being a substitute for alcohol, money going to building schools in Colorado, funding drug treatment in Washington," says Sabrina Fendrick, director of strategic partnerships at Norml. "Every single verse in this song is accurate and can be corroborated by research."

Afroman said he had been in touch with Norml since 2006 or 2007. "They've been educating me and giving me information," he tells Billboard. "I got on a conference call with Sabrina, who enlightened me about some things: how states benefit from money raised from ir, and how Colorado and Washington have money for drug treatment. There's hope now, so I'm intrigued. This is a free track -- education helping the legalization of marijuana."

Indeed, the public opinion about marijuana legalization seems to be turning (aside from a few hiccups surrounding the potency of edibles), or at the very least getting attention : there are ballot initiatives to legalize pot in the November elections in states including Alaska, Washington, D.C., and Oregon. "This [song] is taking advantage of the public tide in favor of it," says Fendrick.

As for Weedmaps' involvment, it's decidedly nonpartisan. "It’s a spiritual thing," says company CEO Justin Hartfield. "We want people thinking differently about marijuana, in the creative sense and how people ahve harnessed it. Musicians throughout centuries have been making amazing art that pleases everyone. Our brand to be up there with those ideals, because that’s what we’re all about here."

The remix of "Because I Got High" also launches Elevated Inspirations, Weedmaps' initiative that every month will see an artist (the first one will be Cherub) producing a song that shows how cannabis influences their creative process, including shots of them behind the scenes, smoking bongs in the studioFlyLo-style, etc. "All these artists use marijuana to inspire their own creativity," says Hartfield. "We wanted to shed light on that creative process, how they use cannabis, do their creative thing, inspire them. Marijuana's not exactly known for its creative use."

For his part, Afroman believes "this is just a chance to write a remix that’ll help with the legalization of pot," he says. The pot bard spent about 30 minutes on this version (the original allegedly took him only a few) and laid down live guitar tracks with his signature double-necked Gibson, and you can tell: the remix percolates with gentle guitar noodlings like vapor curling out from beneath a bathroom door. Though he's said he regrets "damaging the process of marijuana," with his original, he doesn't begrudge its massive success.

"I was a broke kid trying to write a hit that would get me into the music game and get me some money," he says. "The original is good, it's got a whole bunch of views on YouTube, but I wanted to write another song about what marijuana’s doing. It made me feel good, but I came to understand it helps economically, socially, everything."

Whoa, dude.
My Threads:
Saving Your Piss For Your Garden, Lets Discuss.
Vermicomposting! Farming with worms!
Whats In your bowl? Dabber? Doobie?
2020 Indoor 4x4 Mars Hydro X2 LEDs (600W Draw From Wall)
Outdoor Grow Log for Michigan 2020!!!
1.25 X 2 Foot Closet Space SF - 1000 Spider Farmer Ak 47 XXL Auto Grow! (3 Sq Ft)
Everything I SAY IS FACTS, Nothing IS AN OPINION.
PHD In Fixing Your Cannabis​
You must log in or register to reply here.

Marijuana News: What is it?

Use for Leftover Plant Material

Negative affect of nearby Grape vine....?
2