I stressed my first grow because I could?

Hi all,
I am in week 5 of flower. These are photoperiod feminized Lemon Jeffrey. I'm a little in the neurotic and OCD side, so I defoliated, supercropped and FIMmed too much and now you can see the results-way too many buds for undersized plants. I added another light (now have three HLG100 Rspec and a 46w blurple (that I put in front where there are a few more shadows).

The plants are getting ¼ recommended dosage Dutch Master nutrients with extra foliar sprays of liquid kelp and Saturator. I water every four days as my plants are in doubled 7gallon fabric pots. I do have one plant in a 3 gallon pot, but it seems to be producing about the same number of buds (that's another whole subject, though).

So, you can see my photos. Any suggestions aside from leaving the darn plants alone at this point?
Thanks,
Ted Oh, I put up the net too late for scrogging, but I'm leaving it up, hoping that it will be needed to support all my buds....

Just fertigate/irrigate when they need it, whatever damage was done is done.

Yea,I'd take the net away too,at week 5 I very much doubt they,ll stretch anymore now,just try and fatten ur buds up now and at least get a bit clean smoke for urself,flipped them to little by the looks of it.i think u know yourself now you've been a bit hands on,but use it as a learning experience,ull know better next time.what strain is it anyway?.Good luck,76

Yeah pull the net at this point or try to lower a touch for support if needed... first grow... well done sir its just keep on keeping on at this point. They look good and wouldn't go changing anything. Grab some mittens with the strings tape em onto the hands have someone tie them to a chair and sit on your hands... you got this.

They're from Irie Genetics (Colorado). They were the only seeds my small town dispensary sold at the time, so I'm hoping for the best.

Yep, it's difficult to not mess with them. I need a life...
Ted

I was lazy and didn't get around to removing the net, but I'm glad I didn't as the plants weren't done growing yet. N 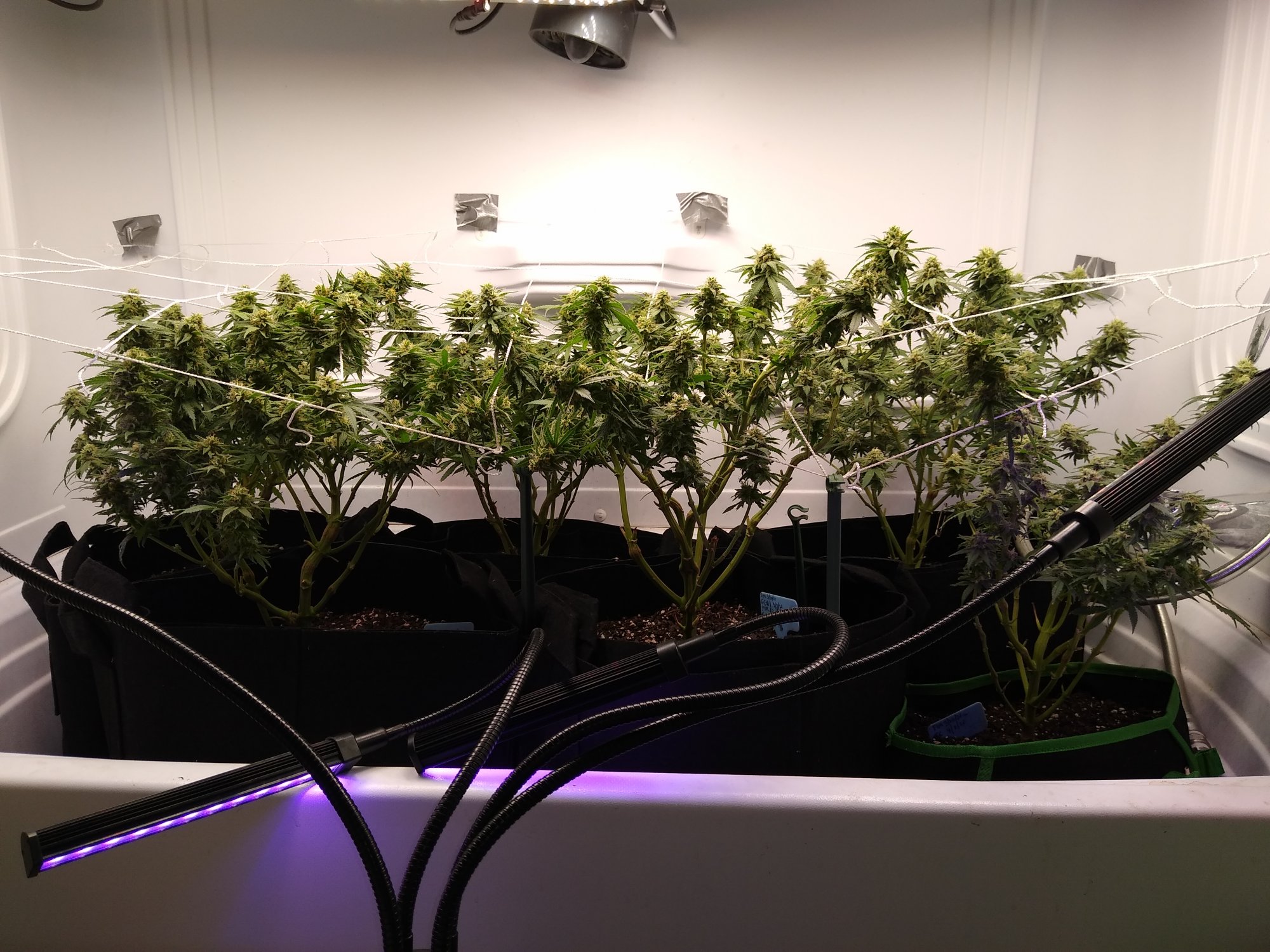 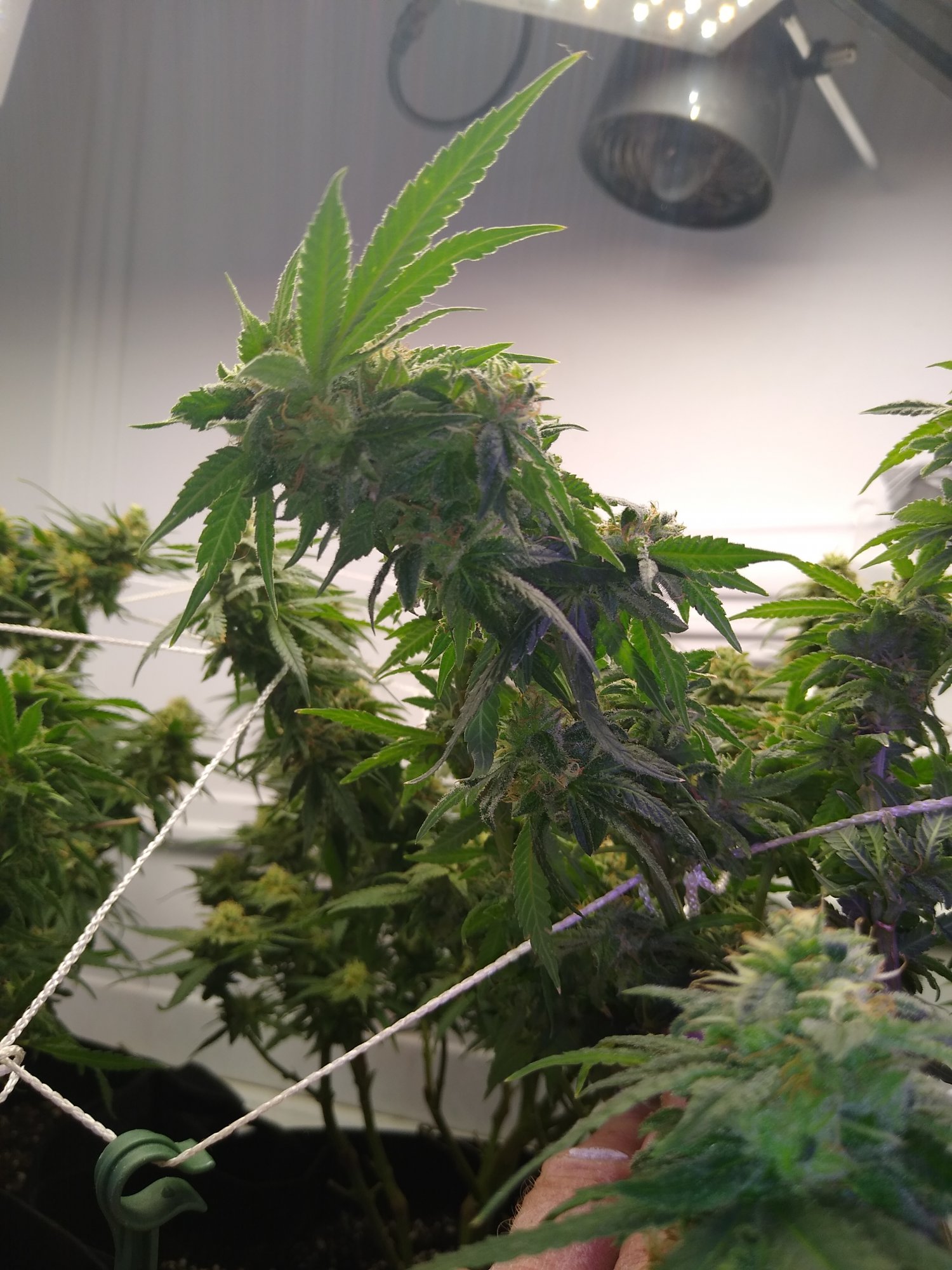 ow I'm using the net to separate the buds to get more light to the popcorn buds. Day 48 of flower today. Trichomes are still clear, though I have some yellow/orange pistils.

I've resigned myself to a shitload of popcorn, but I'm hoping the buds get fatter over the next three weeks. Supposedly the Lemon Jeffery is ready for harvest in about 70 days.

I wish I could water more and get more nutes in, but it's been four days since the last watering and the soil is still pretty moist 5-6cm deep. I've not been able to go under every four days for watering since I started. I have the plants in the doubled up 7 gallon fabric pots, so I guess the second bags hold more moisture in. I'm pretty fearful that something will screw up the harvest at this late date.

I'll update this thread with photos as I go along.
Ted 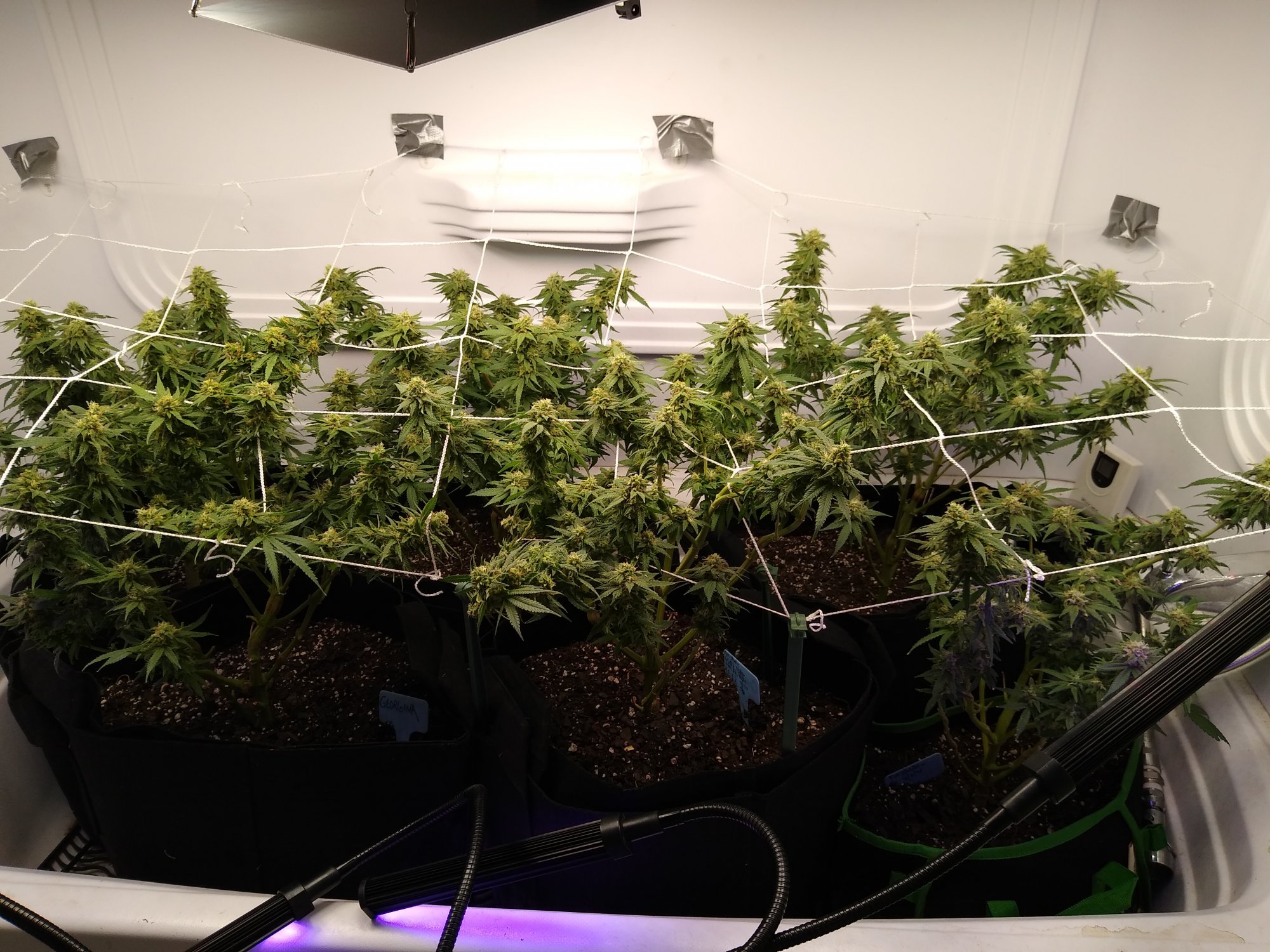 Don't spray anything on buds you want to smoke.

Not after the first couple of weeks. I'm out West and I didn't worry about the humidity causing mold, things dry so fast.

These are duplicate/cross posts on my threads, so those of you who are interested in my grow results don't have to go through all of my threads to search for my harvest info. I'm doing what I wish other posters do.

If duplicate posts of my grow results aren't allowed, please let me know.

From another of my threads:

"Yeah! Eleven weeks since 12/12 flip today and I did my top harvest this morning! I looked at each bud at the trichomes (with the loupe) and they are mostly cloudy with sprinkling of amber ones. The full amount so far from the six plants is 363g! Recently I've been drying buds for Hubby's sampling and the yield has been about 25%, so assuming a yield of 22.5%, it's 2.90oz! I was hoping to get at least an ounce a plant and it looks like I'll get it. I'm thrilled at my results, given that this is the first grow! Hubby and I have quite a tolerance, but so far it's stronger than what we usually buy at the dispensary. My son reported that one of his non-tolerant (as far as frequency of use) friends smoked a bud from last week and said that it is excellent.

I picked the ones that are ready and some of the smaller buds that were casting shade. Afterwards, I watered with 1/3 prescribed nutes. I'm not flushing, nor am I doing a blackout period due to the staged harvest. I'll continue to update my posts. It bothers me that so many people post with questions and problems, but my main question usually goes unanswered: the yield at the end of the full harvest.

Next harvest in five days (right before the next watering is due). 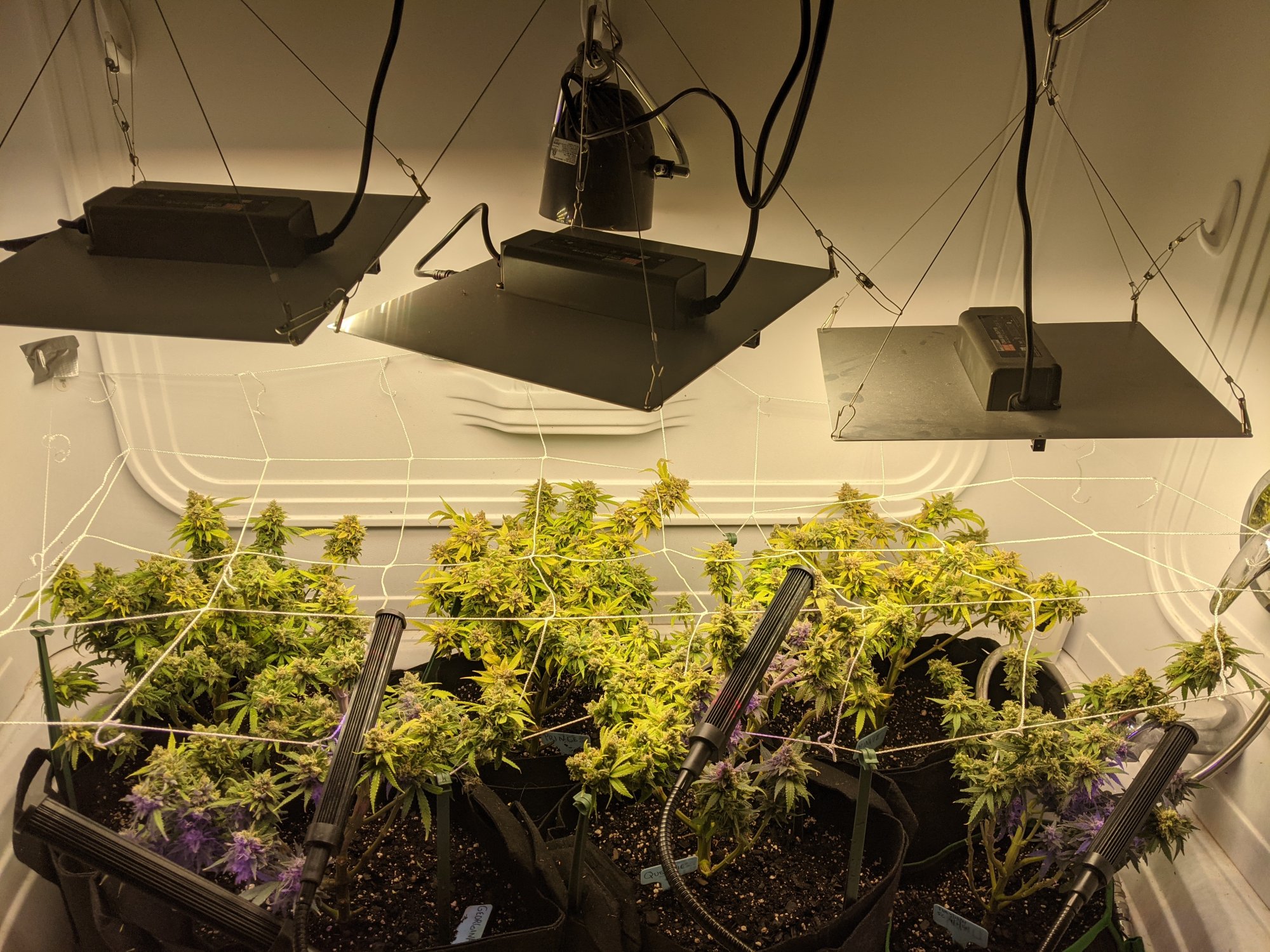 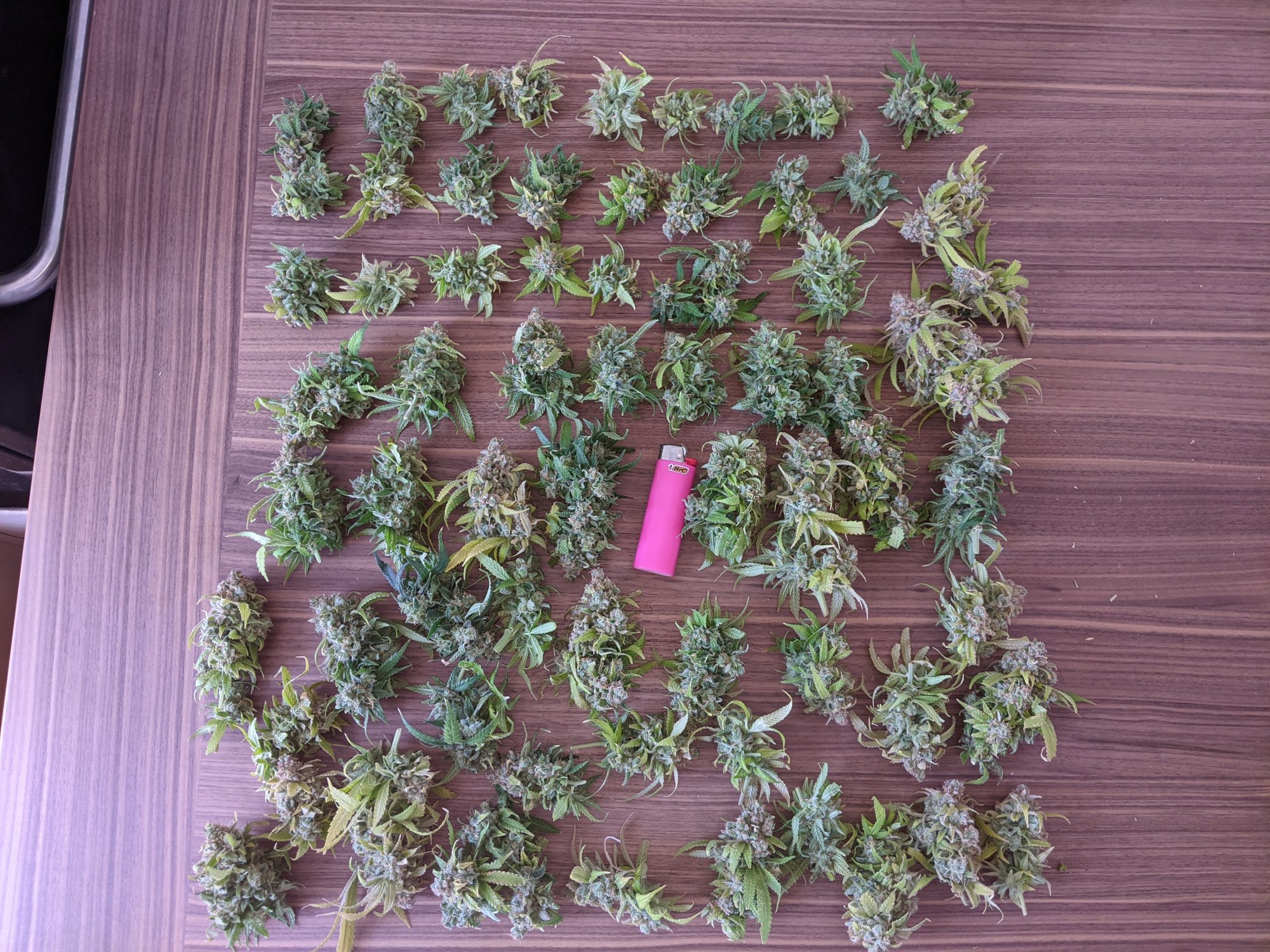 Well done man, that is definitely not bad at all for a first grow

congratulations! nothing better than harvesting and sampling your first grow... may you be blessed with many more bountiful harvests!

Soon it becomes: trim the top nugs. Hand strip the rest and trim it when you smoke it.
As for yield: my worst (LED was 0.25/watt drawn.) And the best was about 0.75/watt 600 HPS. These are crops with no fungus and no pests.
I've gotten higher yields per watt but they don't count if it's got bud rot.
Limiting factors are space. And no CO2.
I usually grow a medium yielding kush.

And as far as I know dispensaries never ever have weed I want to smoke. They always buy top shelf mids. Look good in a bag. Sometimes they smell good. But it's never the Quads. You should be able to blow them away with your home grown quality. Congratulations on successfully cropping. Lots of people don't and get mad and quit.

#Ponky: Quads? All I could find on what that means is a quarter of an ounce, but reading your sentence, I don't think so.

But thank you all for your kind words and encouragement. Things would not have gone as smoothly as they have without the input from all of you!

I wouldn't have gotten mad and quit because this was an experiment. If I had lost the entire crop, I would only blame my aggressiveness in HST. I was gonna be kinder to my girls next time around, but I think I'll give roughly the same treatment. I didn't know the girls were such masochists! Maybe I'll stab them through the main trunk next time!

I guess stressing the girls with so many insults (supercropping, topping, FIMming, underfeeding nutes, defoliating almost all fan leaves, watering pretty much when dry, roughly every 5-6, thirsty girls).

I am doing a staged harvest. I did pick a couple of buds beginning 6/14 when they weren't ready. I've weighed all the wet buds as I take it off the plant. Right before I put the dried bud into the Grove bags I weighed them again. I will weigh after the cure.

But in the meantime, I did my second harvest. I've only been pulling off buds if they are blocking light for other buds. The new buds are still growing, with many white pistils. I think the staged harvest will continue until the plants start dying or the buds are ready (10-15% amber trichomes).

So, my yield so far is 30g average for each of the six plants. Interestingly, the plant in the 3 gal smart pot has a much lower yield than those in the 7 gallon pots. I don't know how much more that I will harvest, but it should be at least another 500g wet when all is said and done.

So I'm at almost 0.5gr/watt (334 watts LED) so far after drying. Well beyond my wildest hope.
You can see how much is left in the plants. There are at least 40-50 of the larger colas left to harvest (see photos below). 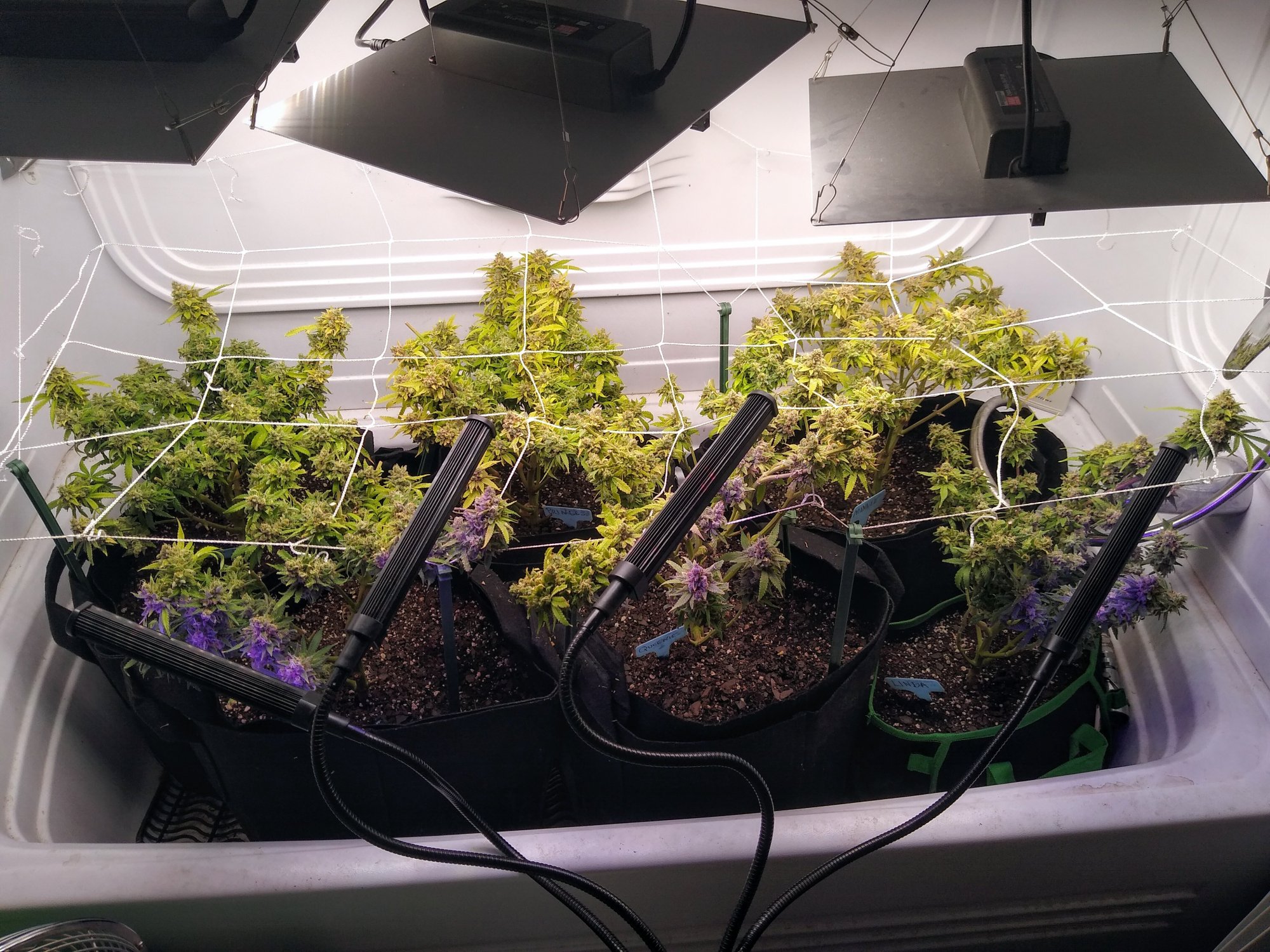 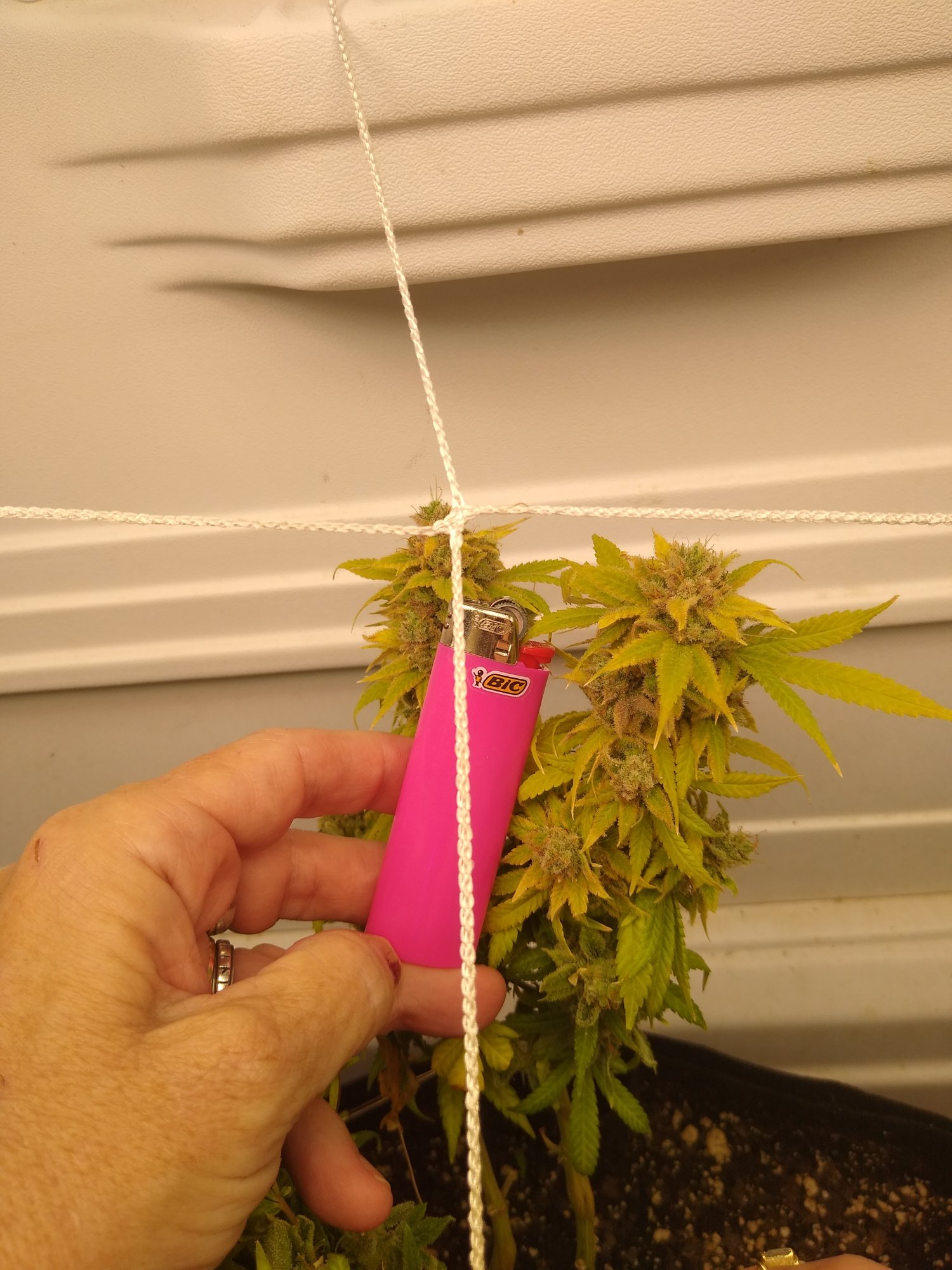 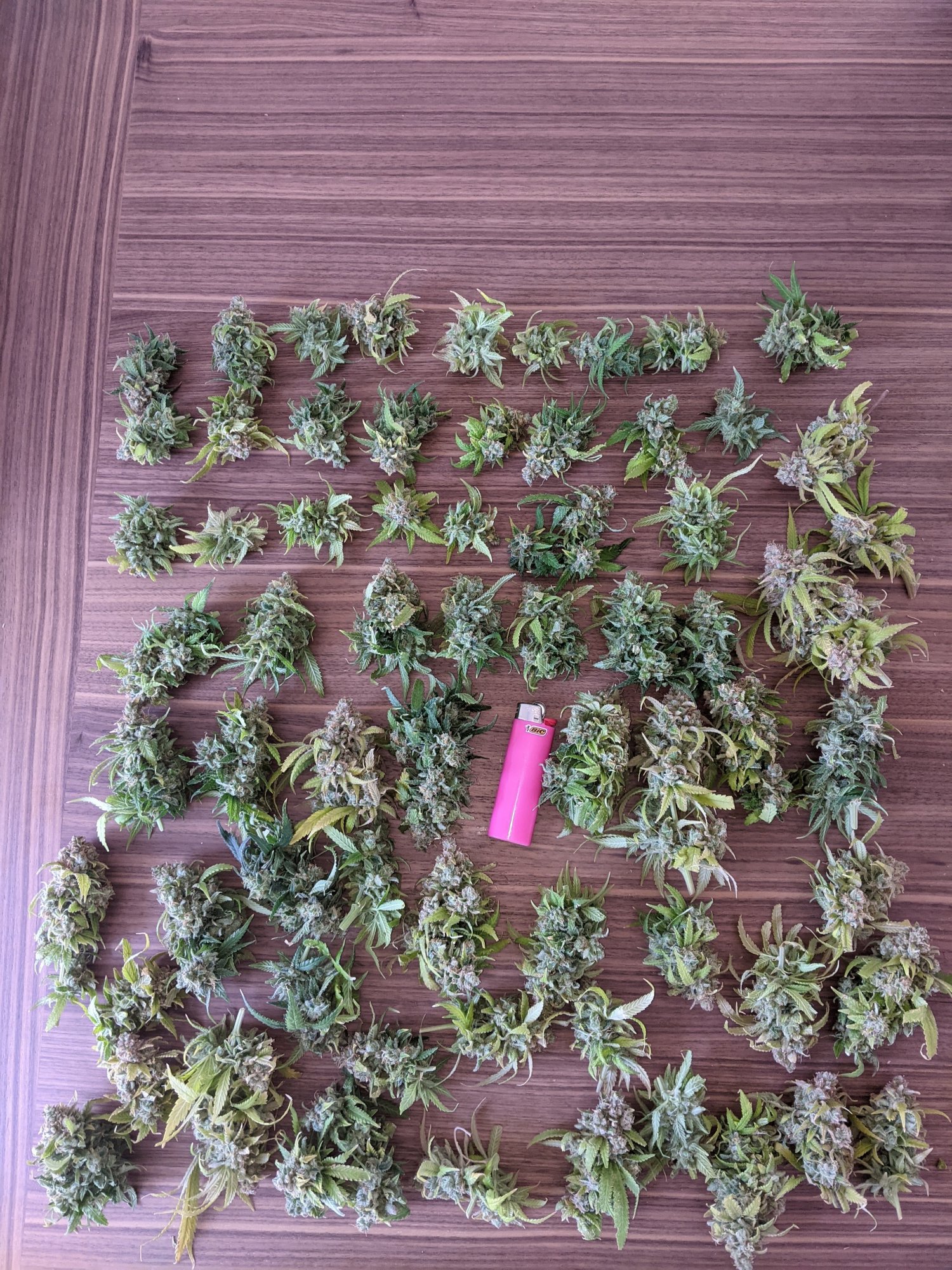 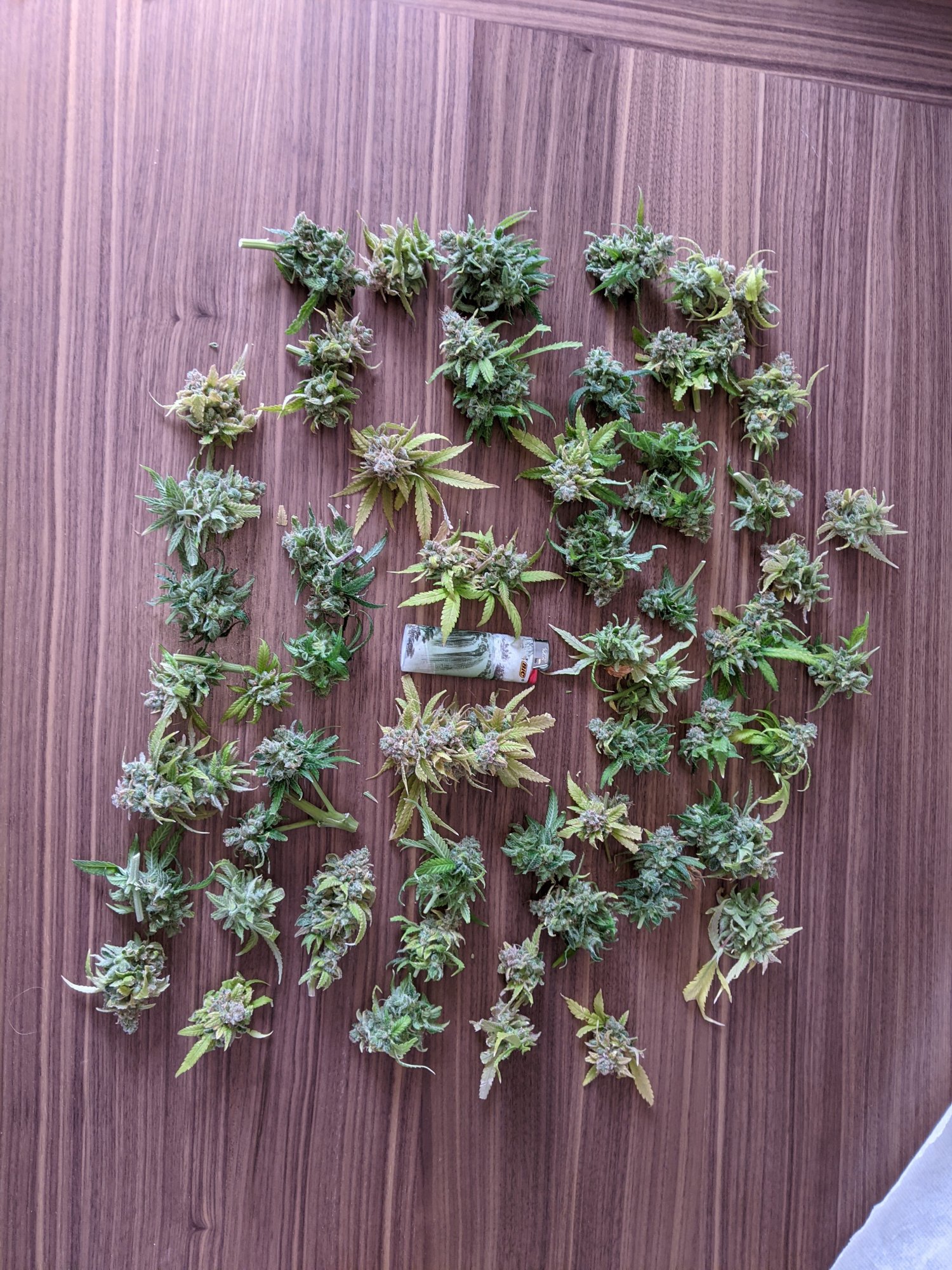 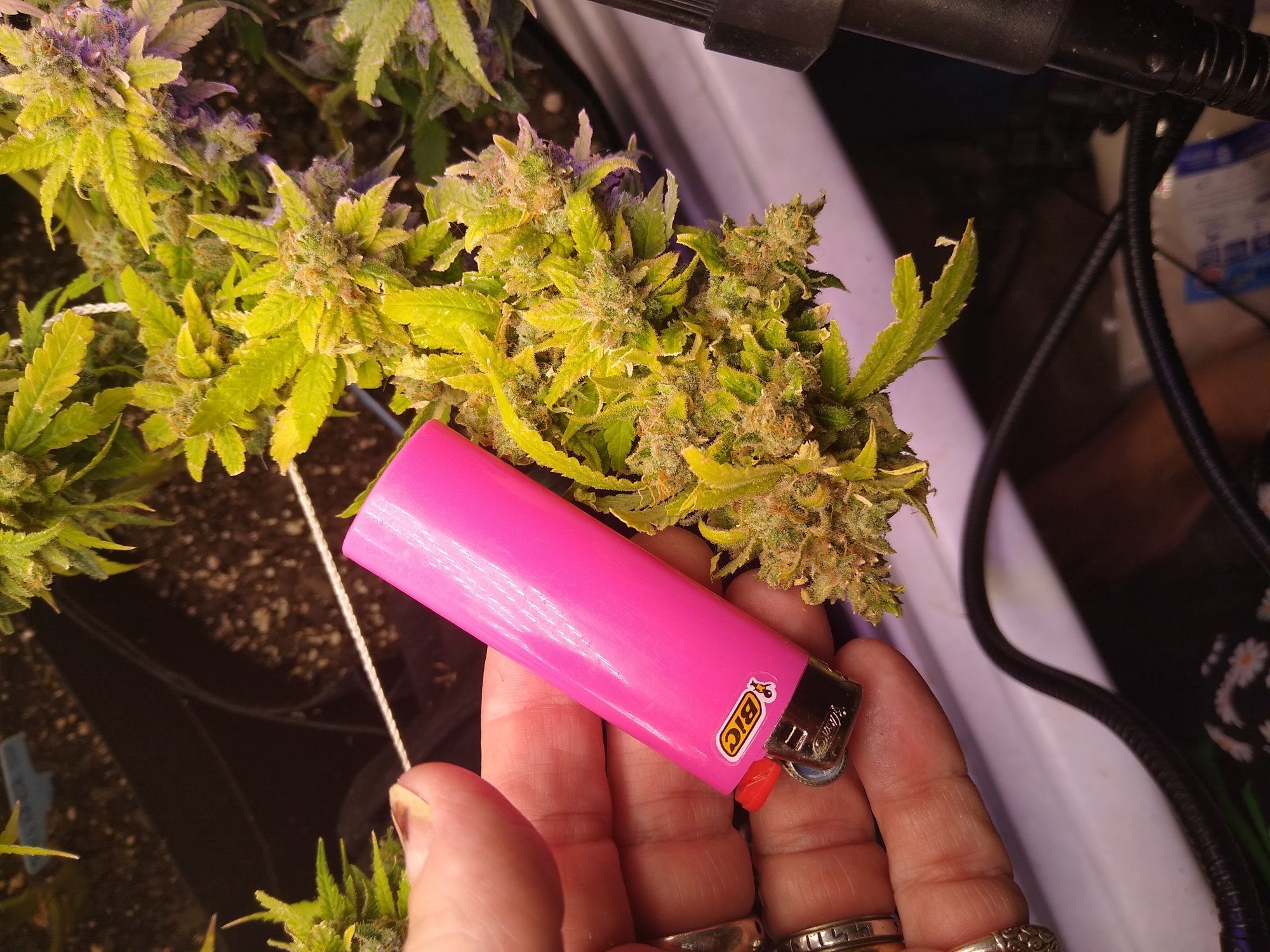 Well is it good smoke?

Still a little harsh before curing, but Hubby says the high is at least as good as what we get at the dispensary. I do edibles and will be waiting until after the cure to decarb mine. I need couch lock so I can sleep, so I want more Amber than what I already have harvested.

I forgot that another intervention was fermenting hard apple cider for about a month with the tube of the CO² exhaust going into the plants. You can see the tube in the photo below. The thermometer/hygrometer is usually within the plants, ignore it in the foto. 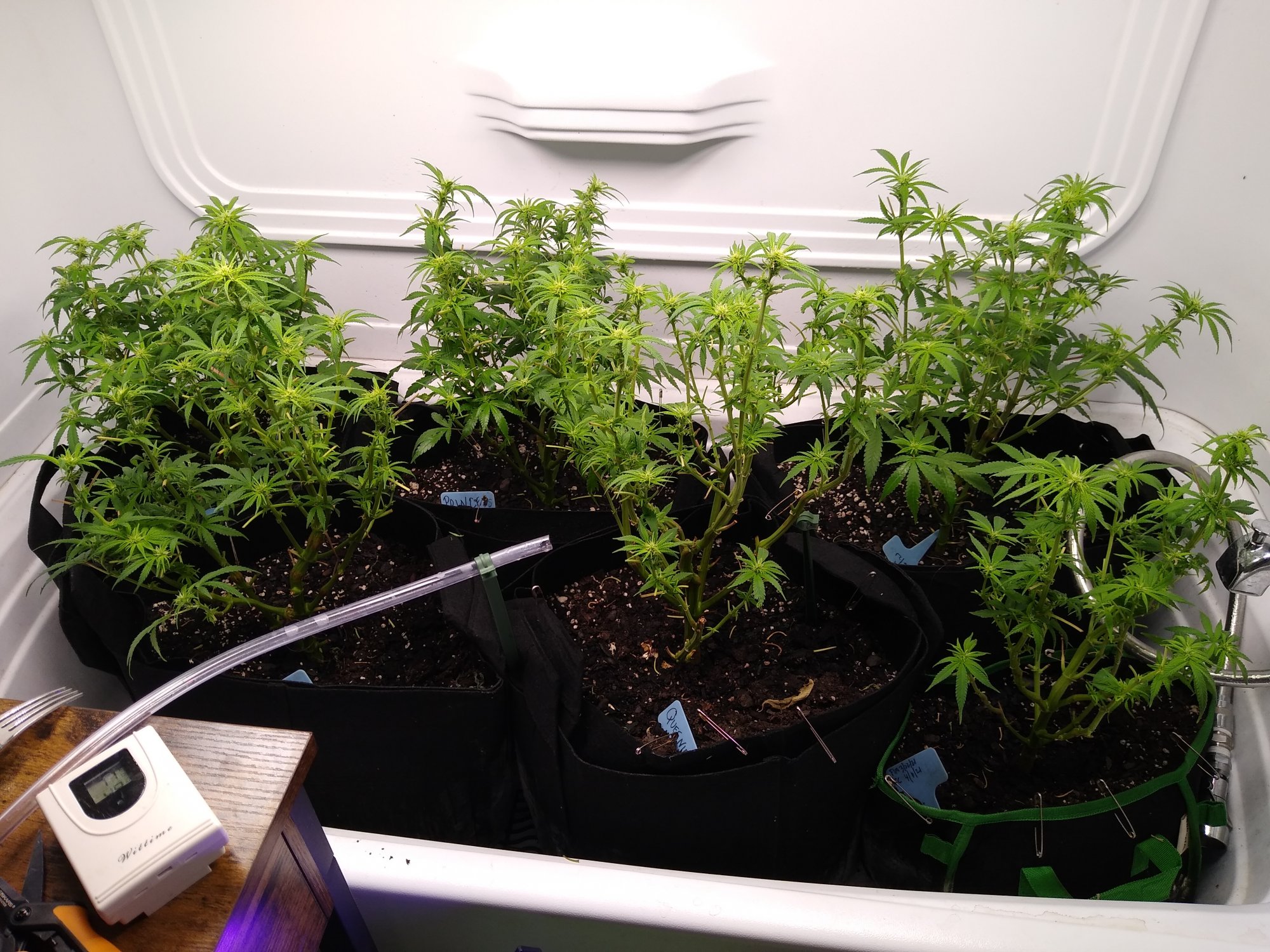 The cider is killer...

NewbieTed said:
Oh, I put up the net too late for scrogging, but I'm leaving it up, hoping that it will be needed to support all my buds....
Click to expand...

That's fab! Now smoke one and sit on your hands.

NewbieTed said:
I forgot that another intervention was fermenting hard apple cider for about a month with the tube of the CO² exhaust going into the plants. You can see the tube in the photo below. The thermometer/hygrometer is usually within the plants, ignore it in the foto. View attachment 1145951

Brewing and growing while not wasting CO2. Nice. Next level.
You must log in or register to reply here.

57 days since flip and still getting (tiny) new buds?

2nd grow run ever in my life

How can I slightly lower the temperature in my tent ?
2