The sun is 93+ million miles away. The three feet between an upper plant bud and a lower plant bud is nothing in terms of the amount of light energy that hits each. But if your LED fixture is 18 inches from a top bud and 36 inches from a lower bud, the lower bud is getting much less light energy because there's double the attenuation.
Click to expand...

After sitting down and doing the math, I have satisfied my curiosity that this is right and why. It's a good day, this has been bugging me for a while. Cheers!

SSHZ, i sat in the back of the bus and the ride was amazing. You killed it buddy. Looks like this is where i get off and catch my transfer. See you on the next one.

Thanks JR, nice of you to pop back in.

Milson said:
After sitting down and doing the math, I have satisfied my curiosity that this is right and why. It's a good day, this has been bugging me for a while. Cheers!
Click to expand...

Btw, in case anyone cares. 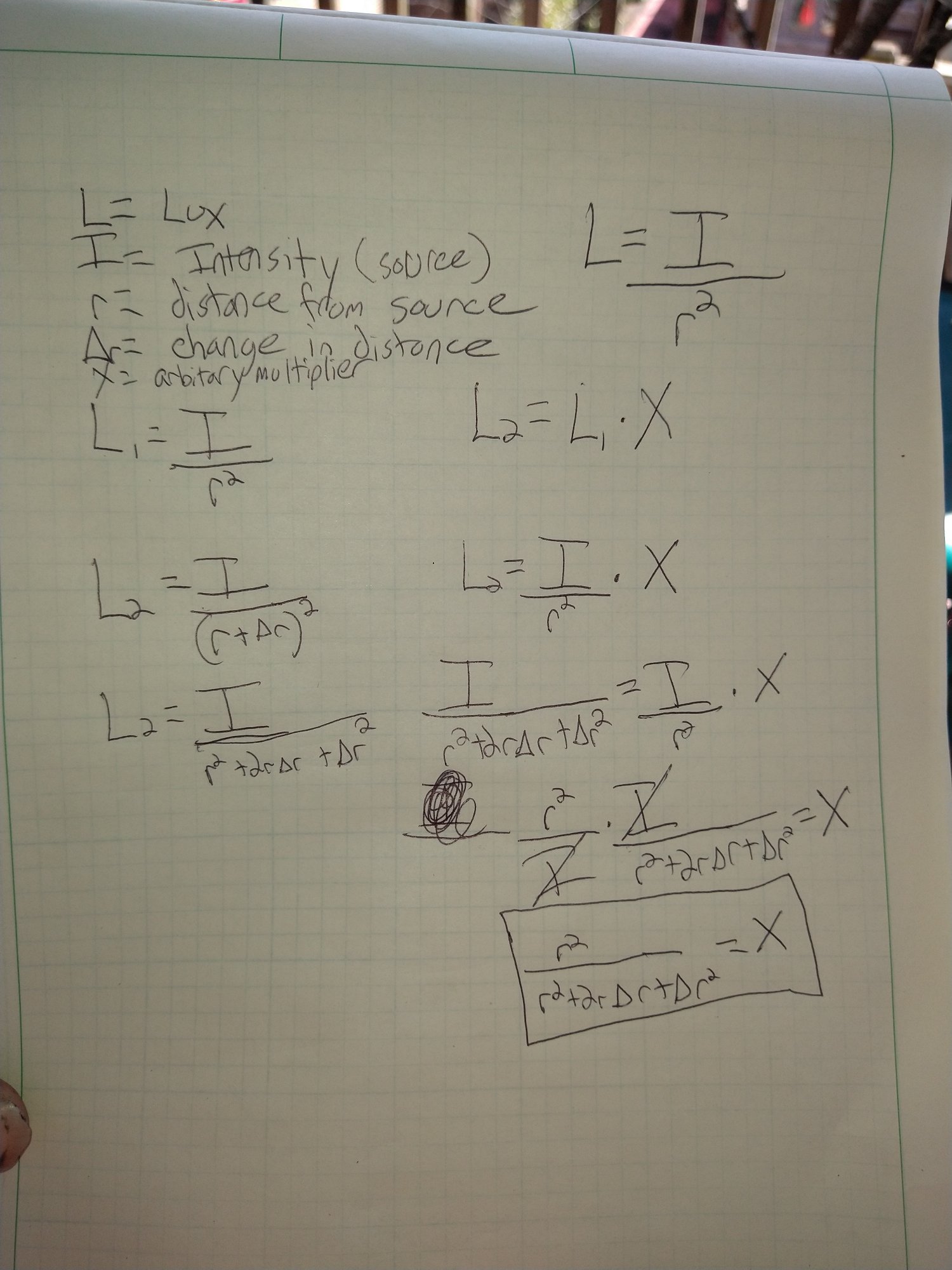 This just shows the total distance matters in figuring out the delta between two distances. Not a formal math proof or anything.

Hey sshz.. I did a search for the sweet zombie thread, but there was so much chatter on this thread I can not seem to find the new one. Though I'm pretty new and have not mastered this forum yet.
Any chance you can shoot this lazy man link to the new thread?

Well, here goes my 2nd LED grow under these lights. Sweet Zombie is a hybrid of Zombie Virus X Black Domina. It's 95% indica and a fairly early finisher with a heavy yield. I grew this in 2017 and although I was generally happy with it, I did a poor job growing it as I threw multiple large trash...

Milson said:
Btw, in case anyone cares. View attachment 1032918
This just shows the total distance matters in figuring out the delta between two distances. Not a formal math proof or anything.
Click to expand...

You'll never believe this, but I was thinking about light again. I came to a realization: if I can get to some threshold for my canopy (let's say 30k) by having my lights close in and dimmed or up high and full blast, I should expect better penetration with the lights further away because the extra distance is less meaningful vs the power of the source.

And I had been keeping it in close and low for heat reasons. Now I have to have a think and possibly recalibrate.

Tonight I'm going to do my final summary of the grow and strain, the only thing that's not finalized will be the overall weight and I'm 90% sure that number will fall between 95 and 105- that final number will be posted by next Saturday. Here goes:

"WHERE THE FUCK IS THE ORANGE?"

The Gavita's were very impressive in all areas, the strain was not. First the LED's:

I can't find one negative thing to say, other than, maybe the $1295 price. The lights are super well made, very sturdy for something that large (43 inches X 44 inches), easy to maneuver up and down, and quite effective in growing marijuana or anything else for that matter I'm guessing. The overall heat generated from them was a bit surprising and more than I expected, as it's the reason I bought them in the first place. But, if you were to put your hand 4 inches below the fixture, I don't feel any heat at all. So, because of it's design, the heat rises quickly in the room away from the plants. When I bought these, just know I was an HPS guy thru and thru. It took most of the grow before I came around but slowly, I started liking them more and more. After seeing the final weight, I absolutely love them. If we assume 100 oz exactly as the final weight, that's approx. 2.18 grams per watt- an impressive number by most accounts. I'm not so sure I will do much better than that moving forward, but it's fun to try.

Regarding the grow with them, I'm a minimalist and try to go slow and easy as it was my first grow with anything LED. I reduced my fertilizing ppm around 30% and really didn't make any other major changes in my grow style. I did have to add a dehumidifier to the room to get control of the humidity, but past that- not much different than normal. Setting the light height was the big unknown for me, and I played with it a little here and there, but generally 24-36 inches in veg and 14-18 in flowering- I did not see any negative affects from the lighting the entire grow. I heartily can recommend these fixtures, but know they are a 2019 edition and improvements are happening fast and furious in the LED market. I'm sure there are other brands out there that can equal or garner better results today in 2020........ but there's nothing wrong with these and I couldn't be more pleased overall. I'd buy them again in a heartbeat.

Regarding the strain "Orange Gasm", I'm not overly impressed. I expected some orange or tangerine or citrus, I would have expected as much with the name. It's mostly sativa, and not my favorite kind of buzz anyway- but it's ok and better smoked in the morning or afternoon. It's probably not a strain you'd want to smoke in the evening unless you are heading out to the bar or movies or a BLM protest (LOL). I choose it because it was feminized, priced right, a heavy yielder and fairly easy to grow- which all came to fruition. I really didn't expect an over powering buzz, as the breeder never really touched on the subject in his podcast. To me, it's a skunky type of strain thru and thru. I wouldn't grow it again but you sure can't knock the final yield- the question remains was it the strain or the lights (or both) that enabled such a high yield??????

I expect the smoke will continue to improve while it continues to dry and cure and even now carries a rich and thick smoke anyway, very tasty on the pallet. I've smoked quite a bit of scissor hash from it, and the grapefruit taste comes thru nicely there. But smoking buds in a joint or bong- nothing citrusy. The breeder did say where the strain does shine is in concentrates, and he was probably correct.

It's been a great thread, over 21K hits with lots of people popping in and out. I've learned a lot and probably wouldn't have had the success I did with a lot of input from others- I thank you all. Check back here in a week for the final numbers, and we'll see if I hit 100 or not. It will be an honest accounting, I can assure you of that. I'm just as happy with 90 as 110 oz.. Anyway, I expect most of the Sweet Zombie seeds to pop by tomorrow and they'll be placed in their pots and I'll start the room up again as it's ready to go. That thread has been started, see you over there.
Last edited: Sep 20, 2020

Awesome review! I’m new to the grow forums, found this one during corona vacation. My hps lights haven’t shut off in 25 years for most part.
After following your thread I just bought two GC 680’s. Main reason is no more sun burned tops. Really hope I keep at least 2.5 - 3 lb per light as I get with hps.
Thanks for the review.

Can't wait to see the next round! Thx for doing the test with your wallet :D Great info all around.

I posted this link in the Sweet Zombie thread too, but it's a must see for those interested in the lights. It's only 8 minutes long. Interested he commented the lights should not be used in rooms smaller that 5 ft. X 5 ft. - wanna bet?????


I wanted to also mention as of today, everything that was ready has now left the house (73 oz from 17 plants) and the last 7 plants are now in tupperware for continued drying, burping and curing. This stuff still has a long way to go but should be ready by the end of the week and the remaining weight looks really good........ remember the late stuff leans more to the Golden Goat and appears to be heavier yielding and better smelling than the earlier stuff.

Final weight report.............this is NOT the final number, just an update. So as stated, 73 are dry and gone. The last 7 plants weight is currently at 36 oz. and it's dry enough to smoke well. I'm figuring another 2 oz lost for continued drying, so that would put us at 107 oz. This is just an estimate, the actual final number will be posted over the weekend. But as it stands, 2.3 grams per watt is more than I ever imagined possible.

And for sure, the later stuff leaning towards the Golden Goat is definitely better than the earlier Platinum Tangie stuff, which finished earlier. The earlier stuff looks better appearance wise, but the quality can't compete.
Last edited: Sep 23, 2020

sshz said:
Final weight report.............this is NOT the final number, just an update. So as stated, 73 are dry and gone. The last 7 plants weight is currently at 36 oz. and it's dry enough to smoke well. I'm figuring another 2 oz lost for continued drying, so that would put us at 107 oz. This is just an estimate, the actual final number will be posted over the weekend.

And for sure, the later stuff leaning towards the Golden Goat is definitely better than the earlier Platinum Tangie stuff, which finished earlier. The earlier stuff looks better appearance wise, but the quality can't compete.
Click to expand...

Impressive grow congrats ! It will be kool to see ya do it again ! I’ll

I wish there was clapping hands instead of a thumbs up. you deserve a round of standing ovation for not only a great journal but also an outstand yield. Stand up and take a bow. https://gfycat.com/flickeringexaltedgerbil

Package arrived with a few extra goodies...
Thanks for your generosity! 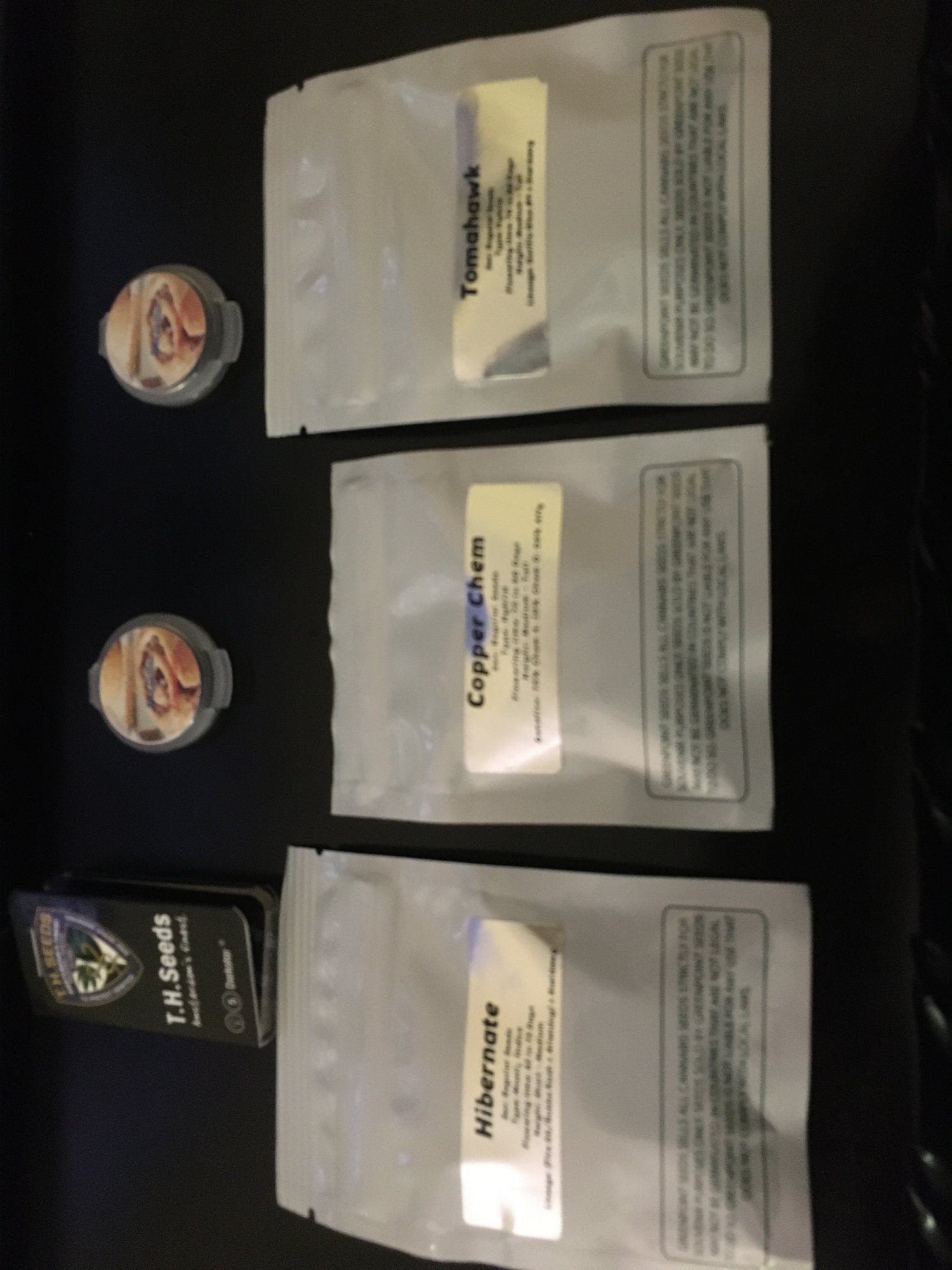 Thanks...... I wasn't sure what was going to show up when I opened the video. LOL

Previously I mentioned giving away the Dragon's Flame freebies they gave me to grow out and report on. It does appear I'm just not going to get to them anytime soon and I don't want them to go to waste. A report on them would be great too when they're finished. On Saturday, with the final number, I'll post info on how to get some. They are: