This will be my first ever build, but I have built speaker towers before. I don't want to pay 1200-1800 for a good LED setup, and this would be more fun anyways. I am looking for something that can power a 4x4 or even 5x5 and am thinking of getting the following to run at around 600w dimmable:

Except for wiring and artic silver, I think I have everything accounted for. I do think this should do a 5x5 on the low end, but I could always space them closer and do 4x4. I could always also get a second Meanwell and run 4 chips each, but a higher wattage. I did want a housing/bracing for the lights and didn't know where to source other than trying to weld my self from something as light as possible. Any help would be great. If I were to run this in a 4x4 it would give me 37w/ft in a 5x5 I would only get 24w/ft. Spacing would be 3 then 2 in the middle, then another 3 on the other side. I think these numbers are OK though as I'm dealing with LEDs.

If your looking for a good value vs. performance look at the Luminous COBs. Nothing wrong with the Citezens but for less money you can get the Luminous and they are 90 CRI and capable of 130 watts each. So I run them at about 65W max for efficiency. I have used them and love the performance. However, for a 4X4 or larger space I would try to get a little more light in that space. I am using 12 of the luminous COBs and running 750 watts but I use three 240 watt supplies (dimmable) and until recently I thought I had too much light but not so, the plants are in week 5.5 of flower and they are needing the maximum light I can give them. At 40 watts per sq ft (the rule of thumb I keep hearing) a 4X4 would need 640 watts. I guess the extra 100 watts could be of value if you end up needing a little more like my grow ended up this cycle.

Don't overlook the fact that you can say build a light that has 3 bars (each bar containing 4 COBs) and with 3 supplies you can run 3 zones of light intensity if you are doing a perpetual grow or some plants are a shorter variety you can lower or raise that bar or turn the power up or down. That is why I use 3 supplies and have 3 bars of light. Mine are also on a slotted extrusion so I can also slide each bar closer or farther away from the adjacent bar.

My wiring was messy but cleaned that up recently but here is the idea (if you hang the three bars separately you can also adjust height of each bar): 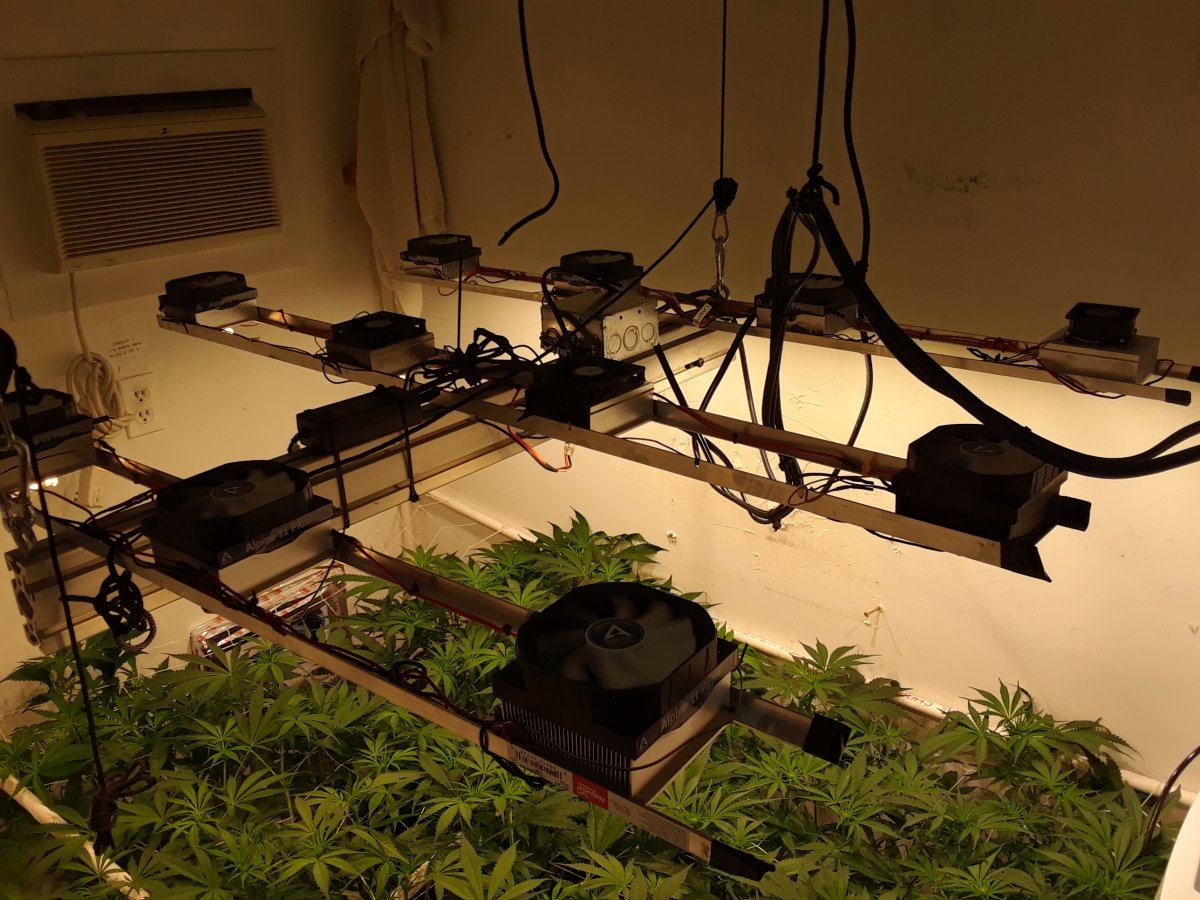 Drivers outside the room for thermal efficiency: 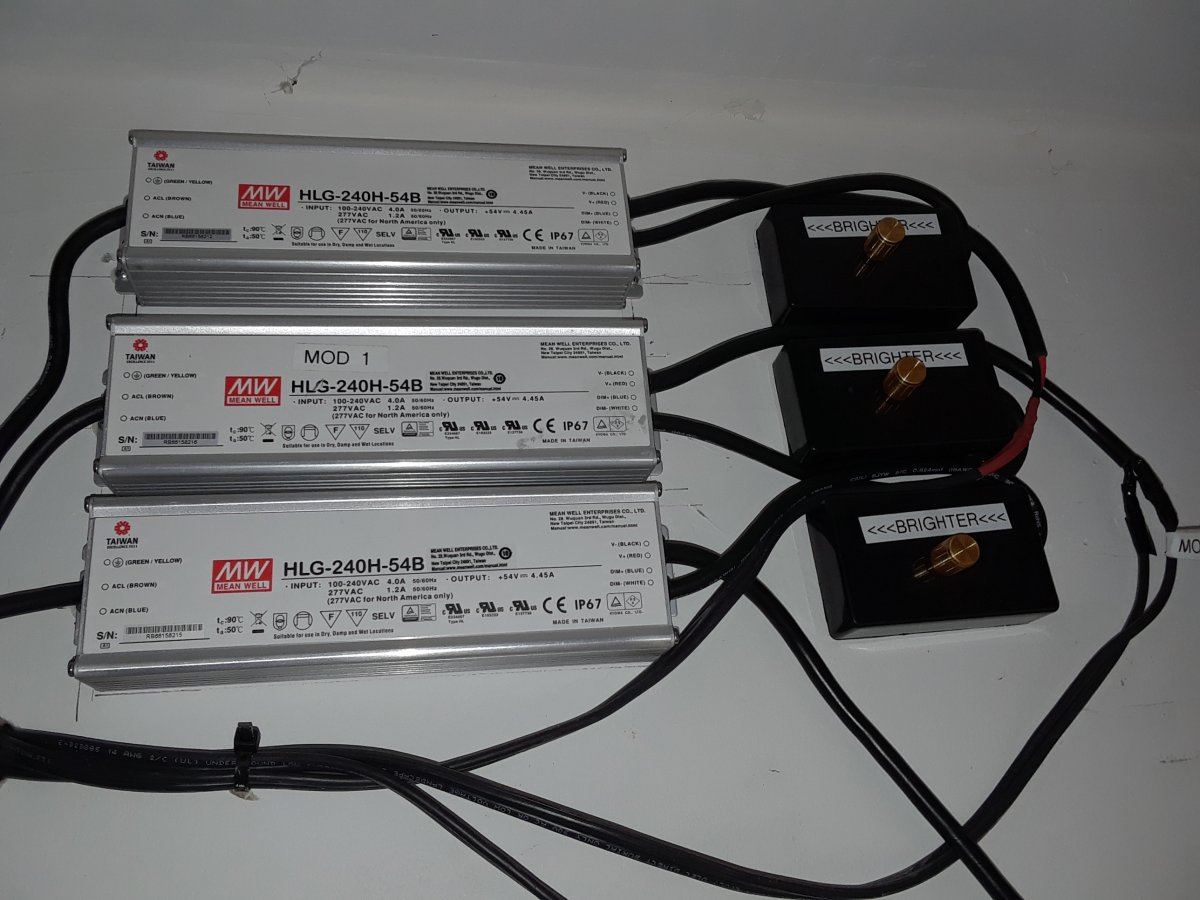 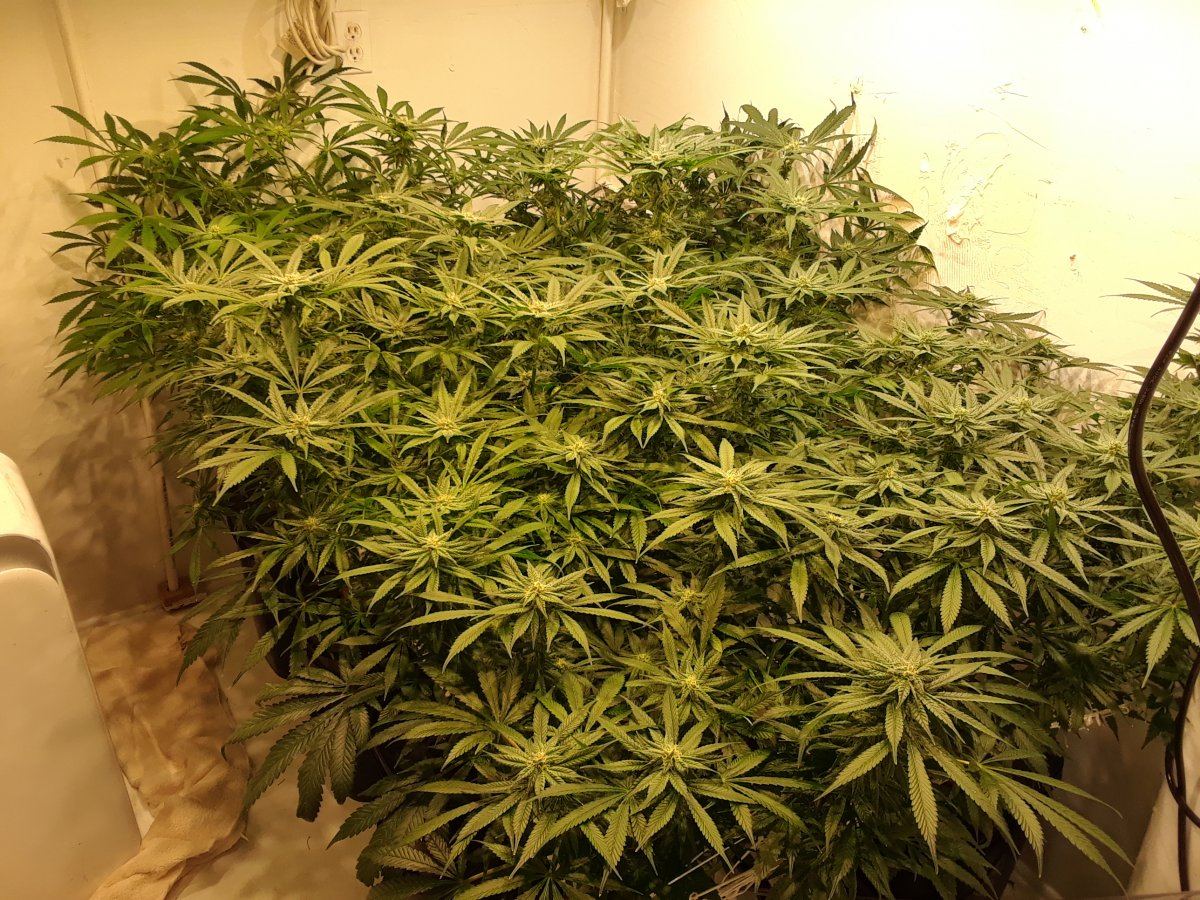 Oh yeah, a lot of people just build frames from lightweight aluminum angle stock from say Ace True Value or online metals. The aluminum is easier enough to cut with a hacksaw and drill with a hand drill it makes it so you don't have to have a shop to make the stuff.

Thanks DPG on the aluminum angle stock. I will look it up

DGP said:
Oh yeah, a lot of people just build frames from lightweight aluminum angle stock from say Ace True Value or online metals. The aluminum is easier enough to cut with a hacksaw and drill with a hand drill it makes it so you don't have to have a shop to make the stuff.

for a very similar price you could do a strip build (either samsung or bridgelux.) I'm just a bigger fan of strips over COBs

Edit: if you have a local metal store it's generally half the cost as lowes oe home depot for c channel or alum angle :)
You must log in or register to reply here.
Share:
Reddit Pinterest Tumblr WhatsApp Email Link