The mystery of the outbreak of vaping-related lung illnesses is still not solved.

But investigators in Illinois and Wisconsin have found some clues, they announced Friday in a press briefing.

Investigators in these two states conducted detailed interviews with 86 patients — mostly young men — and 66% said they had vaped THC products labeled as Dank Vapes. THC is the psychoactive ingredient in cannabis.

What are Dank Vapes and how could they be fueling the outbreak?

"Dank Vapes appears to be the most prominent in a class of largely counterfeit brands, with common packaging that is easily available online and that is used by distributors to market THC-containing cartridges," said a report from state investigators published Friday by the Centers for Disease Control and Prevention.

The CDC has been warning since the outbreak began about the risks of buying products "off the street," and Friday's update highlighted the risks of the black market. Sometimes young consumers don't even realize that they're buying unregulated or illicit products.

"THC-based products were most often acquired from informal sources such as down the street from friends or from a dealer," said Jennifer Layden of the Illinois Department of Public Health at the press briefing.

Around the country, law enforcement is trying to crack down on black market dealers. In Wisconsin earlier this month, two brothers were arrested for allegedly running a large THC vape ring.

And earlier this week, police in Waynesboro, Va., arrested three men and recovered more than 1,000 vape cartridges that were labeled as containing a 90% THC oil mixture.

"They're labeled Dank Vapes," Capt. Mike Martin of the Waynesboro Police Department says. "They appear commercially packaged, and there are a variety of different flavors."

The mixture appears as "a standard-looking brownish oil. ... It has the consistency of ... maybe, like a motor oil," Martin says.

"We've never seen a haul like this," Martin says. He estimates they recovered about $35,000 worth of vaping product. "They were selling these [on] the street."

One difficultly in unraveling this outbreak is that many of the patients around the country who have gotten sick acknowledge using both THC and nicotine vaping products and have used a wide variety of brands and products. In fact, the 86 patients in Wisconsin and Illinois reported using 234 different products.

Nonetheless, investigators now seem more focused on the role THC may be playing in this outbreak, since the majority of the people who have become ill around the country reported using THC or both THC and nicotine, according to a CDC report published Friday. And the CDC updated its warning against vaping to emphasize the risk of THC products: "CDC recommends people consider refraining from using e-cigarette, or vaping, products, particularly those containing THC," the CDC's Anne Schuchat said during a telebriefing Friday.

For people who are unsuspecting, black market products like Dank Vapes can be deceptive.

"Dank Vapes sounds like a cool name, it sounds like a cool product and it looks like legitimate packaging," says Jeffrey Kahn, who operates a medical marijuana dispensary in Washington, D.C. But, he says, unlike the regulated products he sells, you don't necessarily know what's in black market products. "If one or two or hundreds of people are unscrupulously filling them with dangerous material, then people could suffer," he adds.

Man, it doesnt take a rocket surgeon to figure out its probably Vitamin e acetate causing these lung issues, not THC or nicotine.

Why can I figure this out but the govt cant?
Keepin it green

It's even easier as a consumer to look on websites like this and avoid anything in these packages if you arent going into a store directly.
Railing cal nitrate like it was cocaine

I read an article the other day and they said there could be 50 million tainted China carts in circulation right now.
So it’s going to get a lot worse before it gets better.
The fact everyone is aware but the keep smoking them is kind of backfiring that thc is not addictive....
If your willing to risk your life to get high then you have a problem.
"Life isn't about waiting for the storm to pass, it's
about learning to dance in the rain."

Trustfall said:
I read an article the other day and they said there could be 50 million tainted China carts in circulation right now.
So it’s going to get a lot worse before it gets better.
The fact everyone is aware but the keep smoking them is kind of backfiring that thc is not addictive....
If your willing to risk your life to get high then you have a problem.
Click to expand...

Another reason to grow your own. I remember when the reason was paraquat. I've been a motivated farmer for decades, but never before has there been so many trying to push so much shit into the money pipeline. There is no integrity of supply, it seems.
Cannabis, with panache.
Indoor, Canna Coco and nutrients, custom spectrum and environment.

99% sure the "Vape Epidemic" is 100% hoax fueled by big tobacco who are working hard to control the vaping industry. Fake news. Listen to No Agenda and wake up people.

I died from vaping this is no hoax

Deadstill said:
99% sure the "Vape Epidemic" is 100% hoax fueled by big tobacco who are working hard to control the vaping industry. Fake news. Listen to No Agenda and wake up people.

I dont think so. Michigan banned e-cigarettes and we sure arent a big corperate tobacco state.
https://www.thcfarmer.com/community/threads/mimed’s-perpetual-thread.102720/

Mr.jiujitsu said:
I died from vaping this is no hoax
Click to expand...

Wait till you cough yourself back to life. Its awful. ;-)

Mr.jiujitsu said:
I died from vaping this is no hoax
Click to expand...

I was born dead

I think this thread is dead.

Ok. For every action there is an equal and opposite reaction, we all know this. I am not so naive to believe that this is truly 100% hoax. Something is causing these ailments in people. However, to blanket vaping in general as the cause, is a bit early to tell. Also, there is plenty of evidence of direct interference of the vaping industry being led by the tobacco industry.

I'm way behind on work, but I can bring up more links later. I do think this big push against vaping in general is definitely NOT fueled because the Government truly cares about your health. No, I'm sure pockets are being lined and bills are being footed under the table as we speak.

MIMedGrower said:
I think this thread is dead.
Click to expand...

Its been linked to the flavoring afaik. Look up popcorn lung.

Certain vape pen batteries.
Batteries that have a hole at the contact point, that's very BAD! You do NOT want a batter with a hole (see pic below, left is BAD, on right is correct). Tour vaping cadmium vapors.

Pic is not mine, I dont take pics with feet in them.
Lol 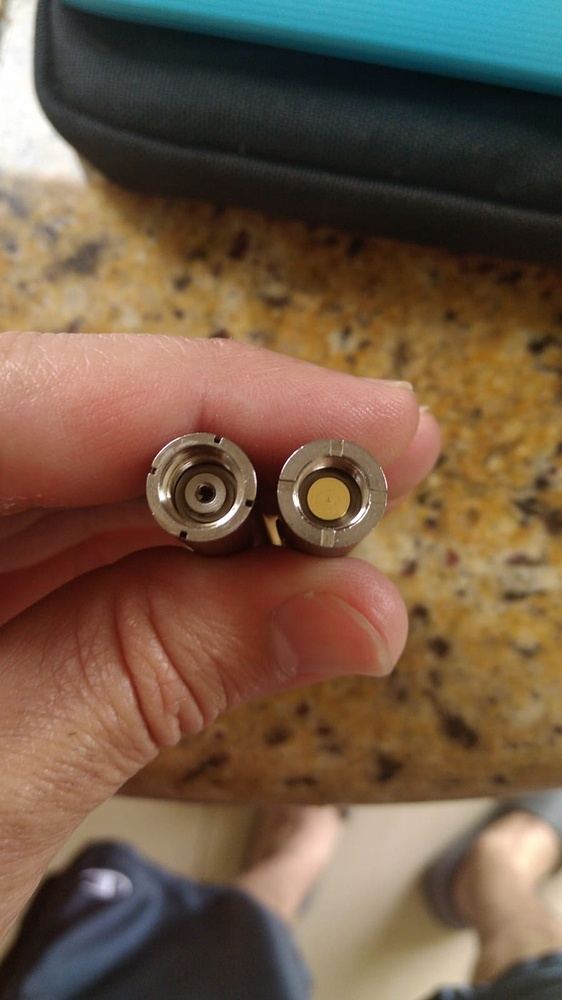 Most of the death carts are from kids popping off juul pod tops, refilling the pod with who know wtf, then having lung issues.


The news doesnt know shit! Only 10% of the truth.
You must log in or register to reply here.

Wrapping head around terps, and how to target them during flowering.