my baby seedling is sick

For the past week and a half my plant has has Orange spots at first thought maybe it was rust or a nitrogen deficiency but I've been giving it Humboldt county grow nutrients. I haven't saw any improvements, I have been using distilled water, ffof soil mixed with some moss and perlite mixed in the ph of soil was 6.08 at last watering. Some of the Perlite has turned Orange a well. It's a bubba cheese auto, I have it in a box that is 24 in x12 in x6 in with 2 fans 80mm with filters. I'll post pic of box has 5 23w cfls in it. I don't have a thermometer in the box yet for temperatures or humidity but I added a cup of water because I don't think there was any humidity in there

Here's pictures, I've been told it has leaf phyllotaxy but I was wondering if that gave the Leaves orange spots or what did if it was a fungus and that was why some Perlite was Orange any ideas any one 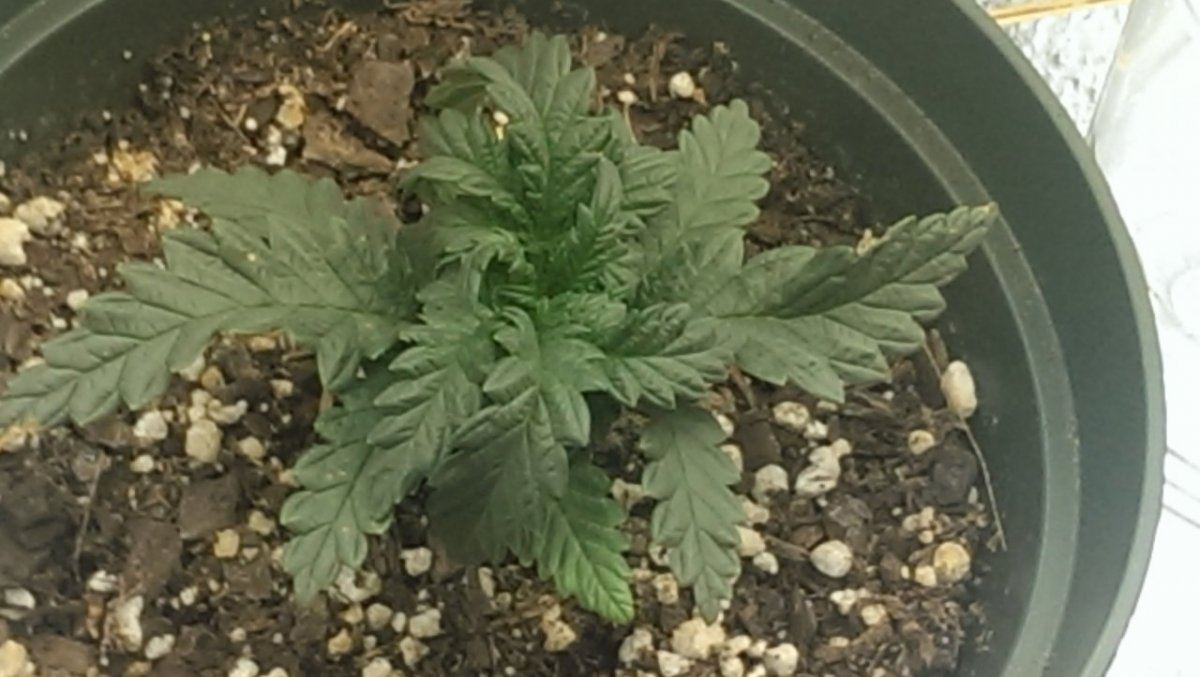 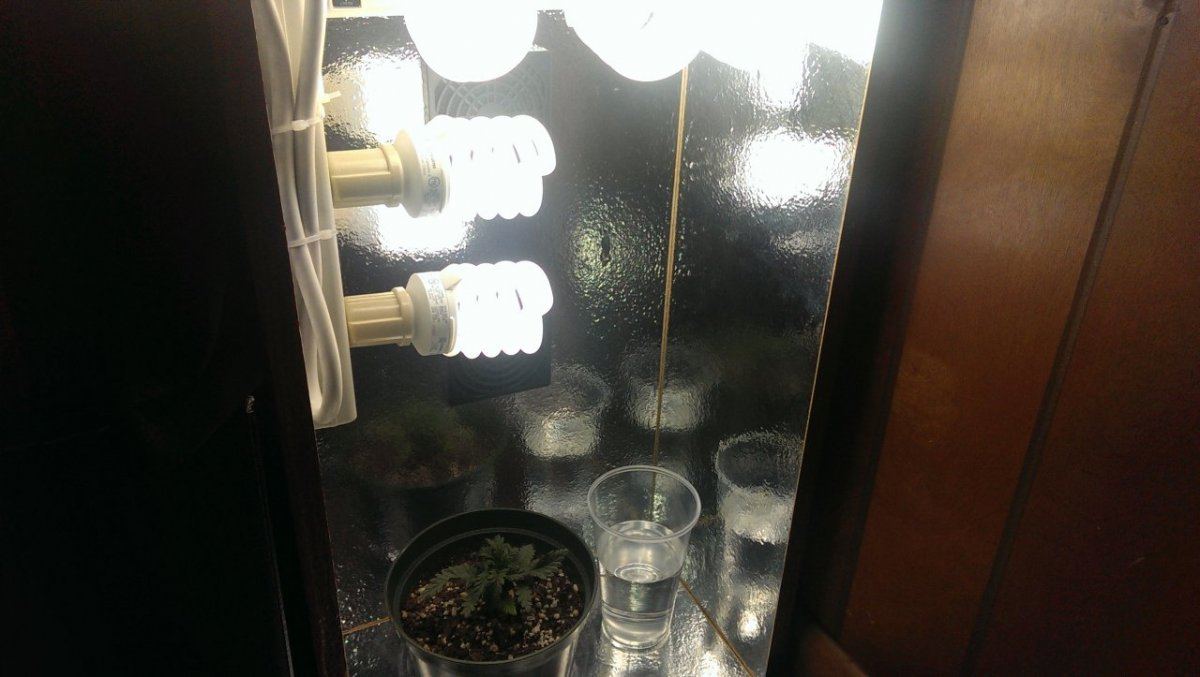 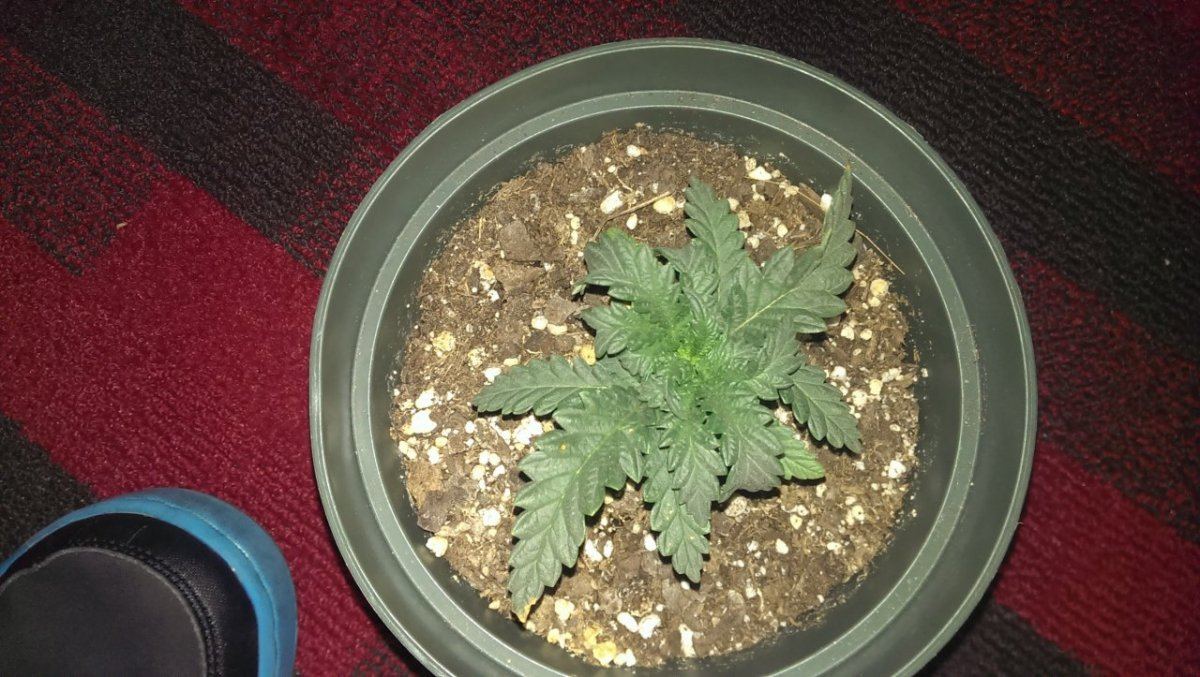 Can anyone help me please?

newgrower420 said:
Can anyone help me please?
Click to expand...

Welcome to the farm friend,how old is the seedling,76
N

She is in between 2-3 weeks old I was told the leaves have something called leaf phyllotaxy that why they have the weird curl but as far as the orange spots nothing he told me my soil was too hot and suggested switching to 50/50 potting soil and Perlite and to turn off two of the cfls but nothing else I was wondering what brand was best for it. I have perlite already because I mixed more into the ffof I'm using along with a tiny bit of moss
N

As far as temperature and humidity in my box I do not as I haven't made it to a store for a thermometer. But I added a cup of water for humidity today as well because I don't think there was any humidity in there.
S

Its hard to tell whats going on. I see Ph issues and maybe she is overfed a bit. I would turn off a light or two until you get an idea of temps...and just give her plain water for a week. You really dont have to use nutes for the first few weeks if your using FFOF for a plant that size. Best of luck
N

Yea I turned off two so theres 3 23ws on in there now okay so I'll switch back to normal distilled water again but it seemed to just keep getting worse as I was and I thought it might have been a nitrogen deficiency because when I was watering it normally the orange spots kept appearing and I can't seem to find the source of what causing it.
S

There is no N deficiency at all anywhere on that plant. It could be an overwatering issue as well. Best advice I can give is keep reading and studying everything you can and dont water if theres moisture in your soil already, let it dry out between waterings. good luck
N

I have been letting it dry out but it seems to dry out almost every 24-36 hrs I think its because the box is too hot going to get a thermometer. But my run off is only 6.08 will using normal distilled water reup the ph of the soil ? I wish I had better construction skills because I'd just make a new box just not a great builder and there's no really affordable premade boxes and I need something hidable or is hidden as in itself and light proof. I spent 200$ on this box and was disappointed in it I thought it was light proof and wasn't.
Last edited: Jun 11, 2014

1st welcome to the farm there are some really great threads through Out The farm:
I have two very small grow closets that I over lighted at the start of my grow along with PH swing. The fix IMHO is
to turn all but one light out open the door and let more air in you said you have two fans and a Filter? u pull air out and let the Negative pressure draw the good air in or?
AND crack the door open till you know you have it balanced between 72-78 for a bit and make sure the air movement is good.
Good luck and Good vibes sent your way.
FlyJ
When it is time
N

I have an intake and exhaust fan both 80mm computer fans. I was thinking about leaving open but then I'm worried about pests then with the box already being in a closet but the closet has no doors and I can't have people just seeing a pot plant sitting right out in the open basically I've been keeping the actual room temperature in the 70s to try to cool the box down. I wish I could try build a new box even though I'm not that handy in construction but can't do so without being noticed and questioned because I have a have a feeling it has to do with this box.

I hear ya NG420 stealth is a must
and air exiting is critical.
good luck good vibes
N

Is there anything I can do inside to cool it down because I don't want to modify the fans and box because I don't wanna get noticed. There is about a 2 in gap between the wall and the box where the fans are. To my understanding I want 100w in there for 1 plant right which I can't achieve without 5 23w bulbs
Last edited: Jun 11, 2014

until you can get a handle on the air in the closet and into the box stable the issue is kinda Harsh. sounds like you will need a better way to ventilate if there is a way to use dryer venting to a window or ac outlet IMO this may be a bit too much heat for your little grow. Read Read Read is best advice and plan a bit before going ferther.
good luck NG

a pH of 6.08 is a bit low, try to get your run off between 6.4-6.8 is what i would suggest. havent read all the posts but if you are in soil and watering with RO, add some Cal-Mag, those orange spots are calcium deficiency.

do you see any pests??? thrips, among other pests, can make your leaves curl too.

No I haven't seen any pests and no I can't do anything like that I thought the leaf curl was due to having to water it so often since the soil was dry so quickly thanks on the info on the deficiency where can I get cal/mag and how much and how can I bring the ph up? I guess I'm going to have to try to modify the box if not I guess I'm going to be screwed on growing here because of this box, I should have known better and just waited till I got my own place. Would it be a good choice to transplant into potting soil from home depot or Lowe's 50/50 with Perlite?
Last edited: Jun 11, 2014
N

Would Leds be a cooler source of light and would I need two different sets one for flowering 1 for vegging still?

For sure looks like a heat issue dood. LEDs run much much cooler than cfls. I have been having good luck with a cheap ebay led 300w panel. You could spend $80 on a 180w led ad get some good results I'm sure. Remember it's Sumer now so temps will be a pain in the ass. Keep it hydrated and don't nute it too much looks like it got a little bit burnt. Just my 2¢.