Here is a pic of the brown spots. It's supposed to be an auto northern lights. My other plant looks nothing like this one. Maybe it's just doomed. I hope not though. I've named it frank... 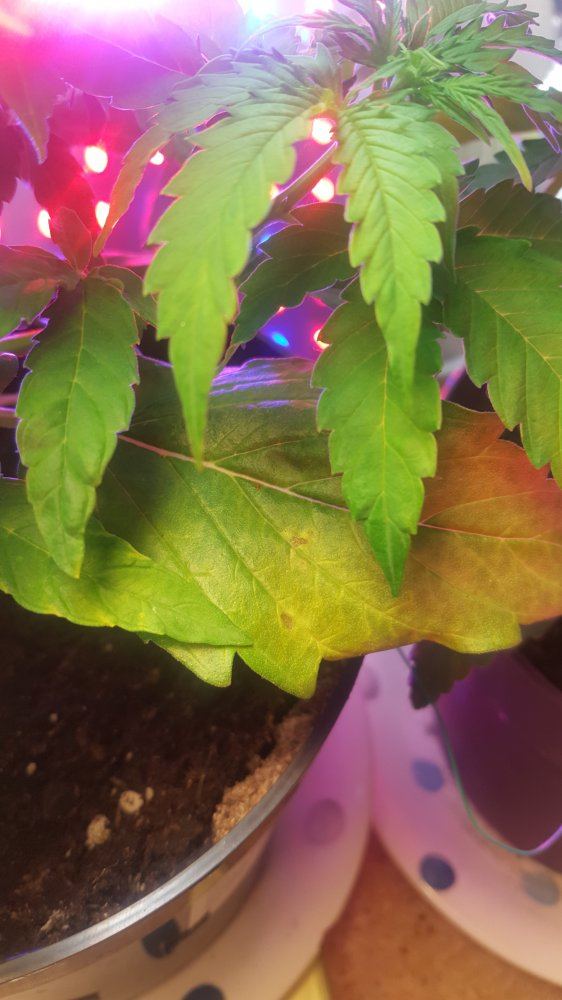 I get here late. I used some of those Led's (lead picture)'they are rated for 21% of the labled output. but it's cool light and will help young plants your problem is that while the plant is thinking up your bringing in sidelights at below 1st leaf.
That causes some strange looking leaves. The plant has a program to grow and I believe in side lighting but not like that. I use them in a spot made for them when they say you can't clone it they will help make it possible.
I found that they work better if you make a v out of them and put above the plant.
Re-Veg
You should be adding some enzymes to eat the dead roots that must be there after reducing it's folage by 99%
I use a foliar spray with Rizotonic early on but the roots are the biggest issue.
If you use cal/mag in your mix regularly then if you don't allow for the N that is a large part of cal/mag you will see N tox in the 2nd or 3rd week of flower and wonder where it came from your leeves are already starting to stretch so it will happen if you don't allow for it.
I have a thing you might use sitting in the grow room when the lights come on, the plants will be drooped a little and should pick up in a small amount of time. They will tell you what they need then, it takes time to learn but you can stop 1/2 your problems then. Mine take 10 to 15 mins to bounce back and 5 min later first water flow. I have found over the years that I uses a lower lvl of nutrients but water 4 times a day I don't water for 2 hrs before lights out.
I have a mother that I keep just cause. She is 4 years old and has been cut 3 times the weed doesn't stay the same as it gets older it is less and less potent. That plant you show has very good upper roots and nice and green you should grow that one out.
The last of old man bs at least once a week wash your catch saucers the water evaporates on them leaving the suspended nutrients on the catch tray in 4 weeks it becomes toxic. Every time you water is redisolved and some is pulled up into the lowest roots.

Your going to start chasing your tale that picture you just posted you have a PH problem and several nutrients are locked out. Most would say your showing a C problem but it's there your plant can't get to it.
Flushing is your worst enemy at this time you will free all the nutrients all at once. Not a good Idea.
Last edited: Mar 16, 2017
D

Thank you for taking the time to type that out. Maybe it's a good idea if I get rid of the side panel. I just thought it might help get some light lower down. I've not harvested this plant yet. It is from seed. (My first try!) So in your opinion it's worth me sticking to it? Would adding cal/mag help at all? None of my additives contain any magnesium or calcium. Sorry I'm slowly learning! Is there any way I can save it or is it doomed?

What are you currently feeding it? Exact doses, and how often?

And do you have a TDS/EC meter?
D

Well here they all are. I've raised the light and upped the humidity to a good level. All soil runoff is ~ph6. I must admit. They look happier. What do you guys think? 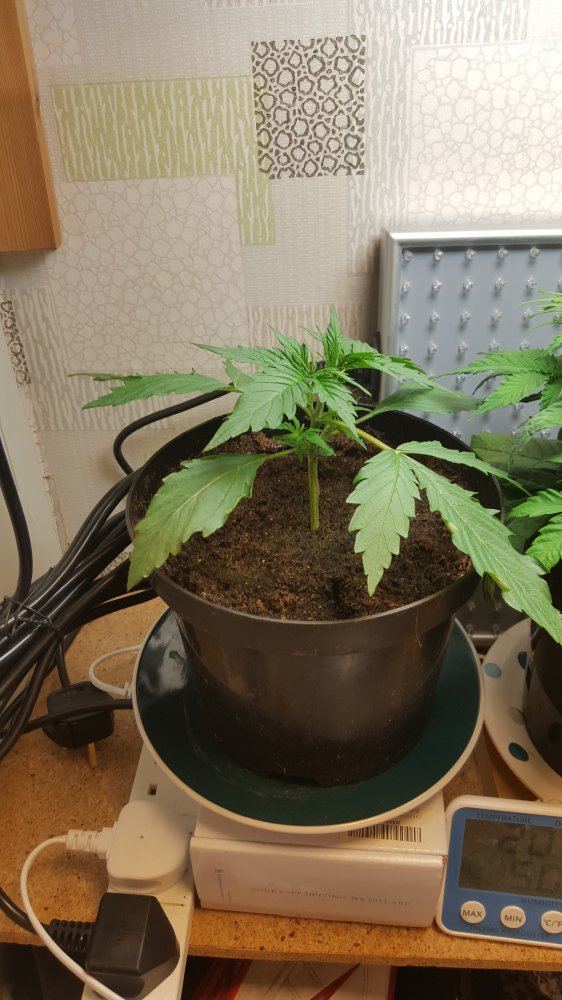 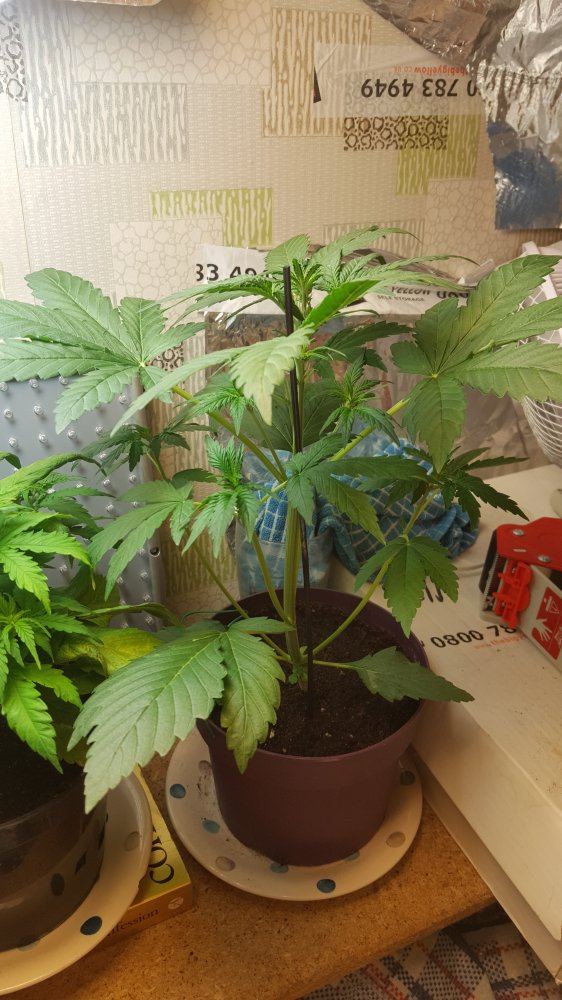 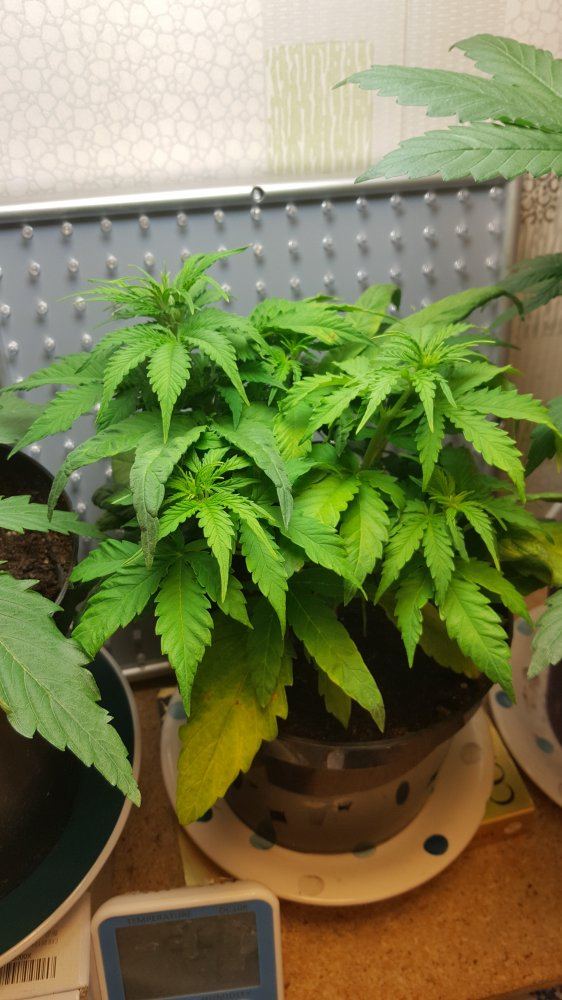 Other than the ugly bottom leaves I still believe the side lights are helping that problem move them up and trim the lower leaves off that is history that new growth is Ok the tips are down making me think a bit to much water. Also You cleaned the dish your catching run off in very good. The leaves are stretching out notice the tips are narrow and pointing down. If your not just coming out of darkness maybe a bit wet. The next week will tell you.
They actually look better than before. Be ready with some Mag in a foliar spray your showing faint red lines on the stems sometimes it's strain dependent if you see no change after 2 sprays with light Mag leave it alone. A lite mag spray followed by a C spray in a few days both foliar spray and stay with what your doing.
Don't mix together till later if you use one at a time you will see it in a day or so. I still don't mix them.
Cal/Mag in a bottle is a great thing some times but most use to much and the extra N will show in the 2 or 3rd week of flower and it will be N tox, and is a trap. You don't see it coming till is to late and if you flush all the locked nutrients will be free all at once. From there you will go to chasing your tail. If you want to make good smoke and pleasant to the taste, tail chasing is out it makes a dried out looking plant that taste like well you get the picture.
E

Dieselpower said:
Here is a pic of the brown spots. It's supposed to be an auto northern lights. My other plant looks nothing like this one. Maybe it's just doomed. I hope not though. I've named it frank...
Click to expand...

Noooo, never give one of your plants a male name, it jinxes your grow.

That led panel will do way more above the grow. Don't worry so much about side lighting, you're not growing huge plants. Also, for an auto you have to ramp up feeding quickly since there isn't a veg/flower state. She will stay short and squaty. Autos are very fragile in a way they stunt easy. I have found that 3 gal is perfect balance of soil for growth time.
You must log in or register to reply here.
Share:
Reddit Pinterest Tumblr WhatsApp Email Link