So the glf clone plant I put in the tent didn't like the transition at all. She wasn't doing well after I put her in the tent. I'm trying to run the lights a little brighter but since the plant went from a blurple to a led I didn't want to shock it too much so I kept ppfd about the same as it was- around 375-400 ppfd. This still seemed too strong so I dropped it even further.. The first thing that happened was the yellowing started to spread from where I thought it was just light bleaching to all over the plant. Then brown spots started to appear on the leaves in random places. I was thinking I had some sort of nute lockout since I was feeding it and had it in non pd'ed buffered soil.
I have since top dressed with ph'ed soil (FFOF) and have been feeding it the normal grow nutes and calmag for every other watering then doing recharge once a month or maybe every 3 weeks. I flush with plain water once a month as well. I also removed the really yellow and/or spotted leaves, 5 or so at a time, per day. These steps have seem to make the plant happier after a couple of weeks. I Flipped the tent to flower 5 days or so ago so I can get her going and move on. I've had this clone in veg for months and want it gone!
I also put 2 more clones in the tent, the middle being from the big plant on the left and the far right plant is a clone from one of my last harvest.

Also have 2 other glf clones going that are smaller. I'm still waiting on the sex of the apparition plant but I think it's a girl. 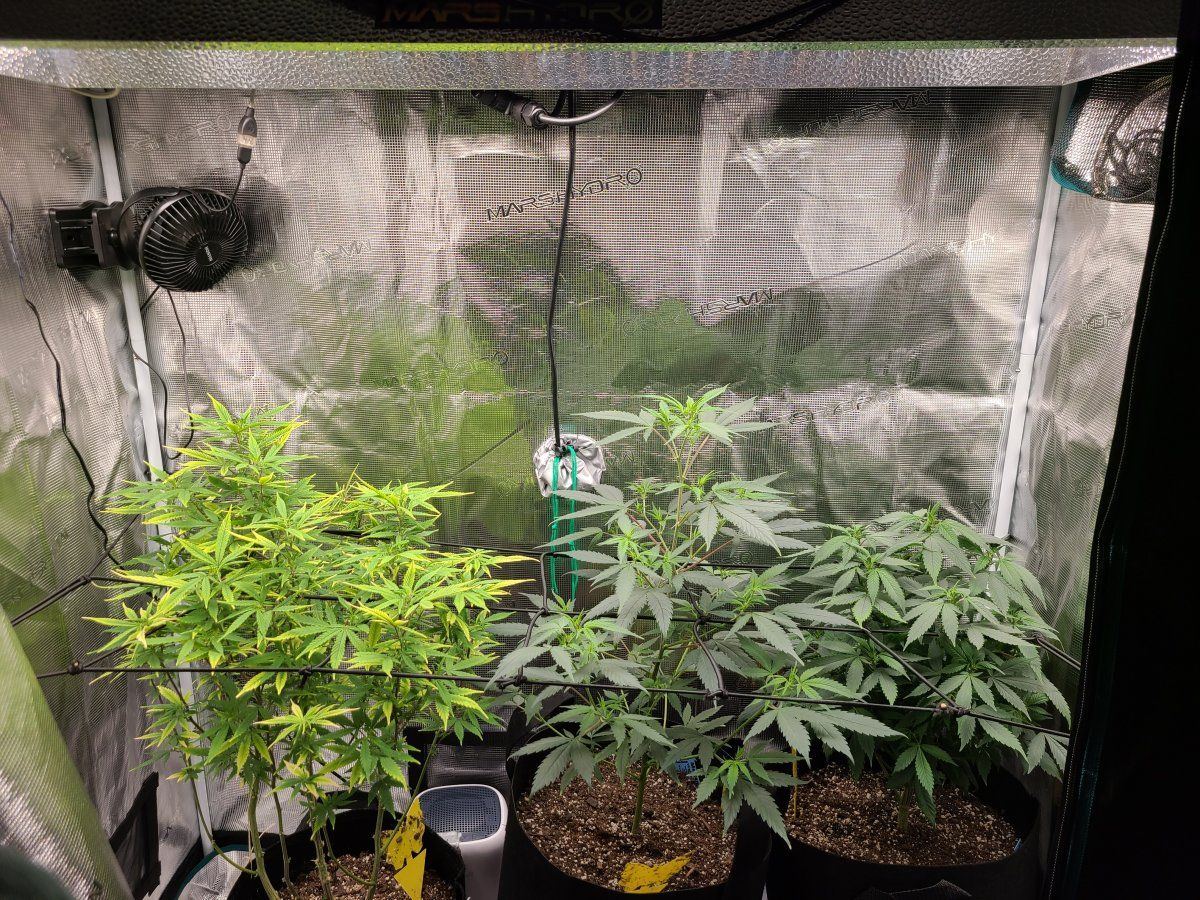 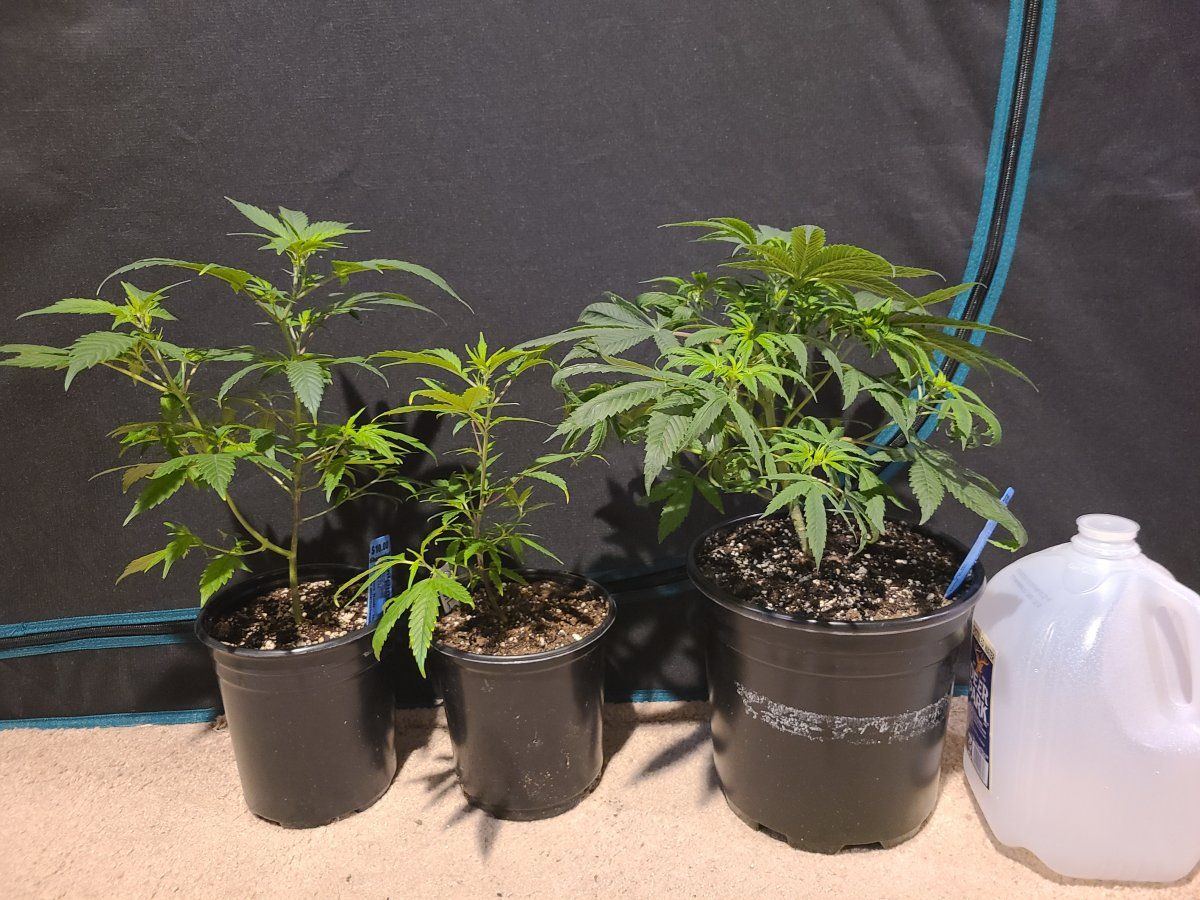 Some final thoughts on the first grow...

In the end the taller plant gave me 2.3 oz's and the other one weighed in at 1.8 oz. The buds are dense and yet a little soft which I think will go away with more curing. All in all I'm pretty satisfied with my first grow and I'm looking forward to this next one that's already a week into flower. I'm already trading with friends and it's fun!
I wet trimmed the big stuff, hung the branches for 9 or 10 days, then trimmed it all up a bit more again. I then clipped all the buds off the branches and put them carefully in Brown paper bags with the bag cracked open a bit. I Flipped the bags every day and left them in there until the buds were crunchy on the outside. I did a tight trim then put it all into jars and burped them as often as needed until they were dry. Now I have them in with 62% rh packets and it seems to be curing away nicely. I open the jars to smell it all the time so it never goes a long time without new air.

For fun I harvested the first plant after 24 hrs of darkness and the second plant at the end of its light cycle. I haven't noticed any difference yet. 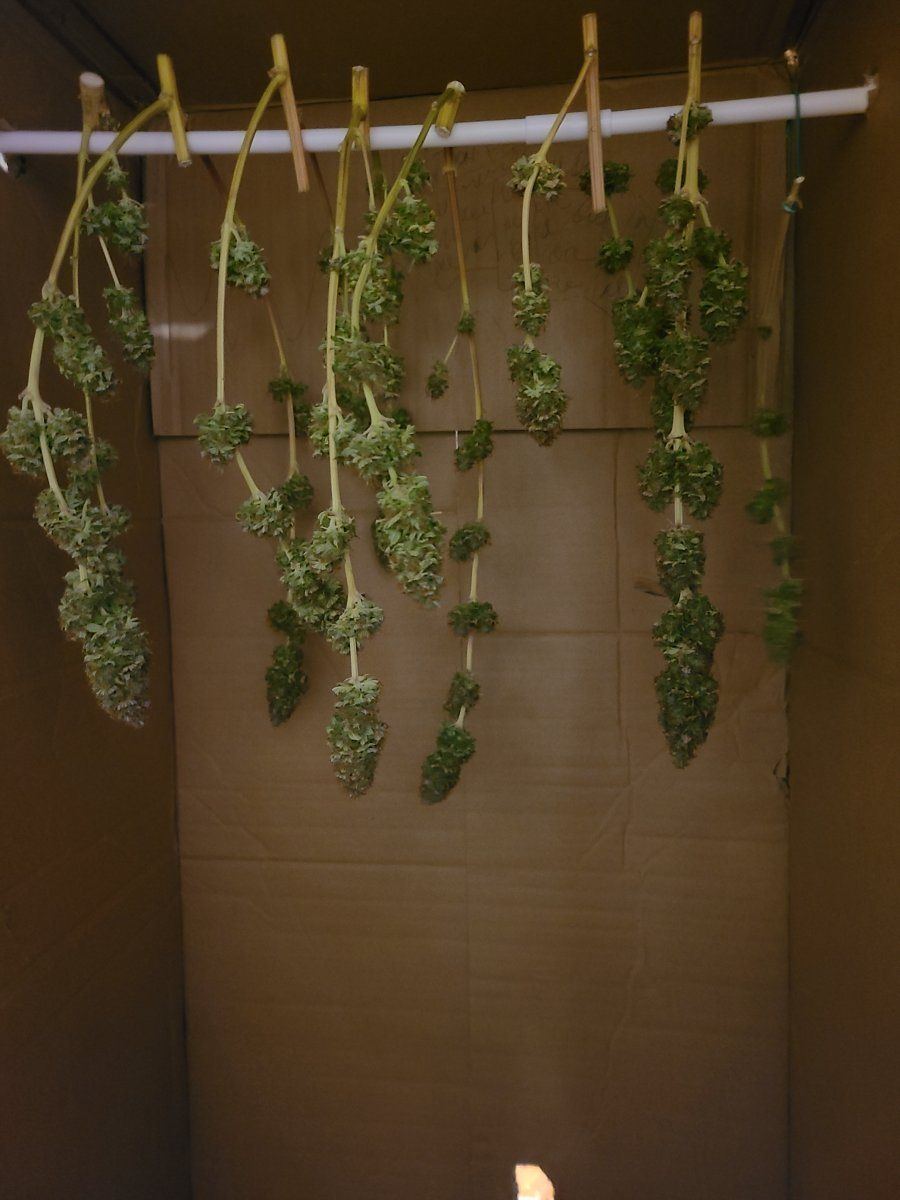 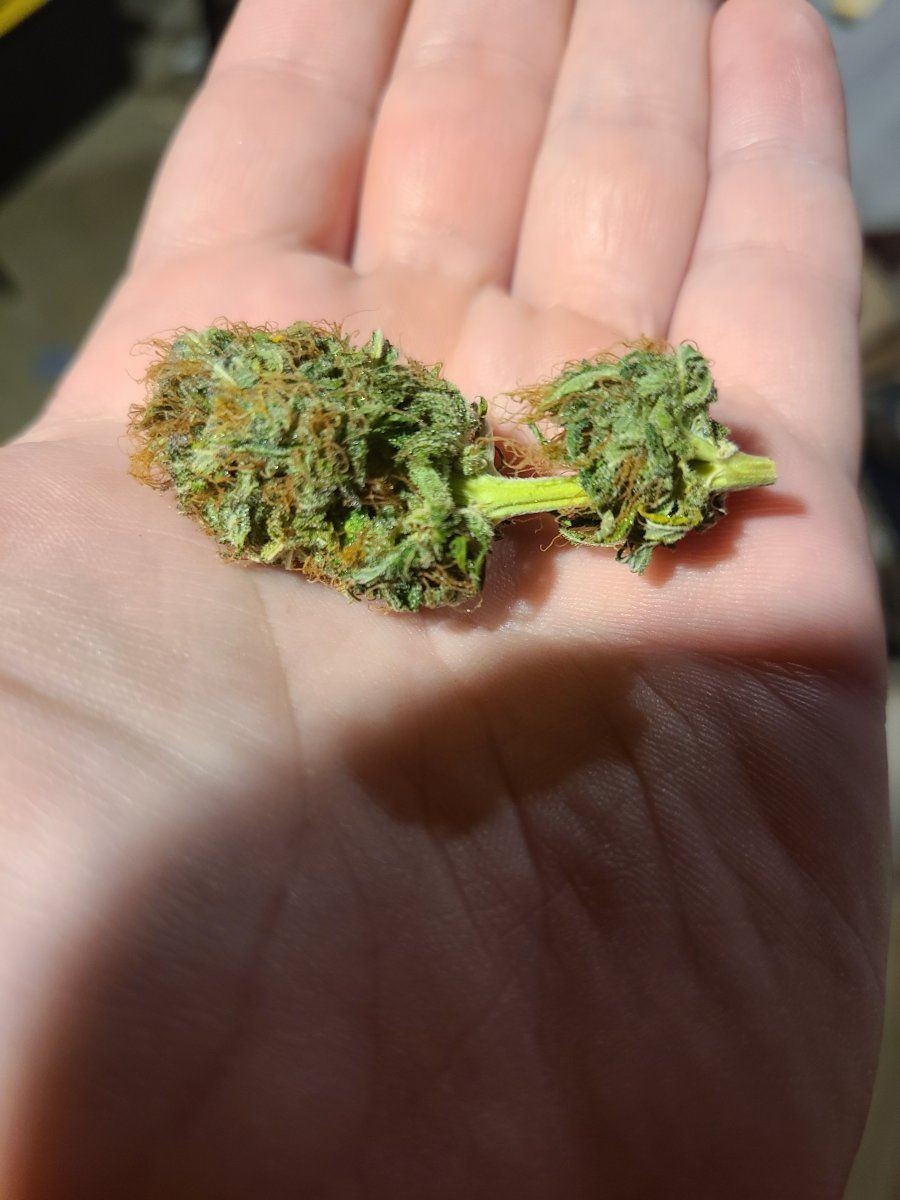 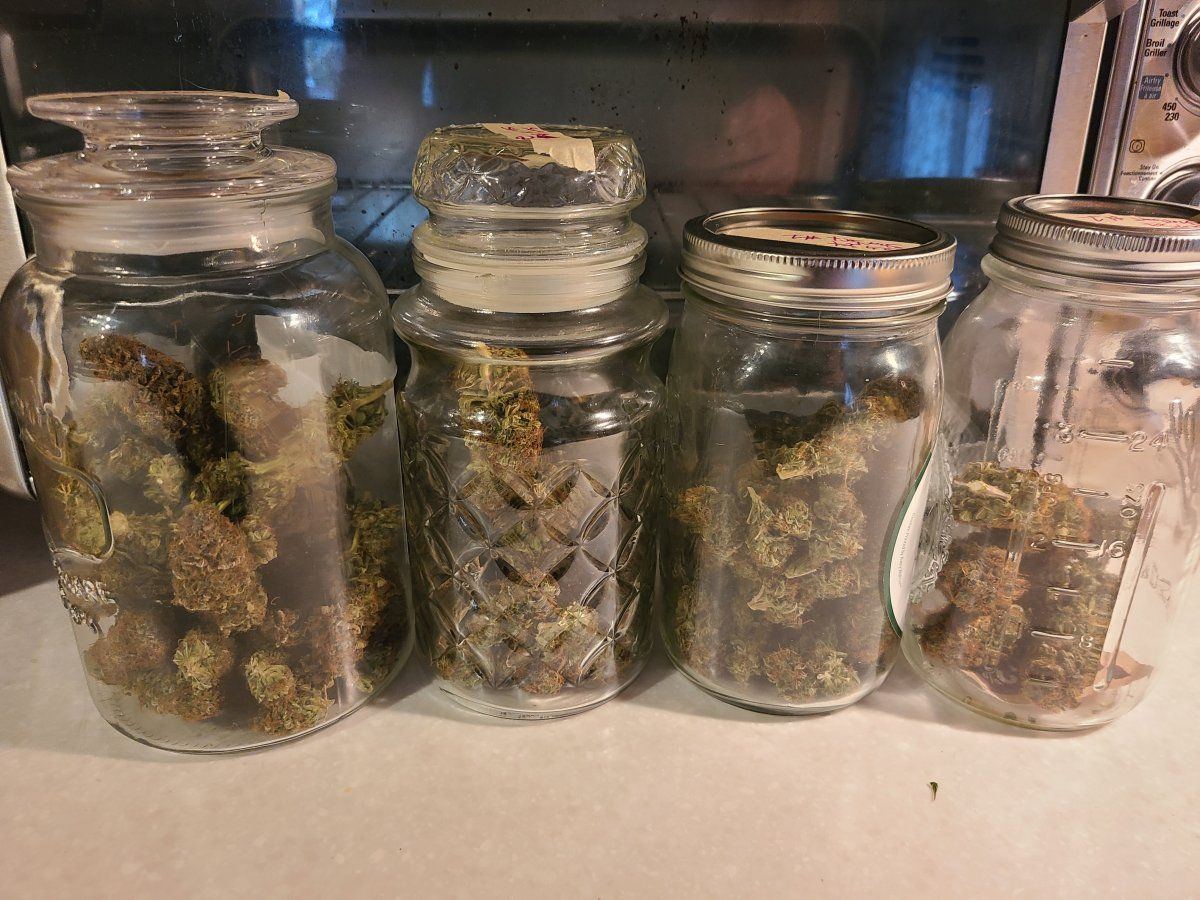 Hell yeah man! Grats on those killer looking cookie jars. I'm a little jealous of you guys with another grow on the way. I'm hoping to improve on my current setup and start another way next February or March.

Schwer said:
Hell yeah man! Grats on those killer looking cookie jars. I'm a little jealous of you guys with another grow on the way. I'm hoping to improve on my current setup and start another way next February or March.
Click to expand...

Thanks, bro!! My father in law gave us a few of those old jars way back when and I knew exactly what I was going to use them for one day, hahaha.

My other "veg area" is a blurple light my buddy is letting me borrow, hung in the corner of my basement, on a cheap timer. While I'm gawking at the flower tent I have others in veg for 2 months or so or until the tent is free then I swap everything out. I do seedlings under my lettuce light so I guess I have 3 stages of them going at once hah. I almost forget about them at times! So far, after the first grow, all but 1 have been clones. I'd like to get a small tent for all of it but maybe one day.

A few updates from the garden...
The first bean in the free pack of 5 I got from shn is a girl. She's called Apparition from best coast genetics which is head dog #9 x ghost rider x London pound cake. It's the first seed out of 4 or 5 from best coast that has popped and been viable. I just got in lake Tahoe as a replacement of the banana soft serve pack that were all duds so we'll see how they go. At least I got 1 for the $28 i spent! You get what you pay for with genetics but I figured, while I'm still learning, these would be fine to run and I wouldn't be super pissed if I killed them or to learn with. I think after these are all done I'll splurge for more name brand stuff but for now I'm having fun. 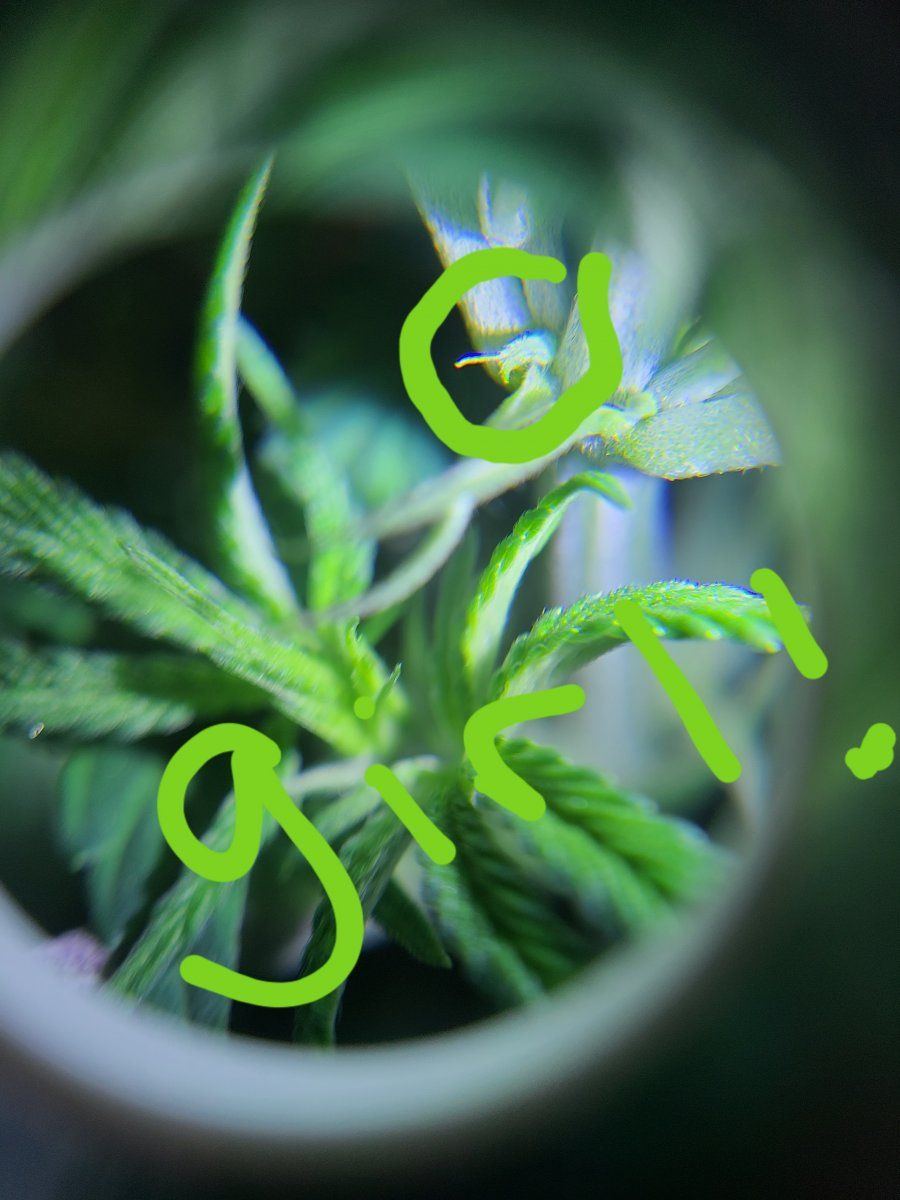 Going into week 2 on the 2nd run in the tent. Got 2 clones of gorilla lemon fire and a clone of one of the sunset sherbert plants from my first grow. Here's a pic of one of the glf

And my homies got my care pack from my first grow 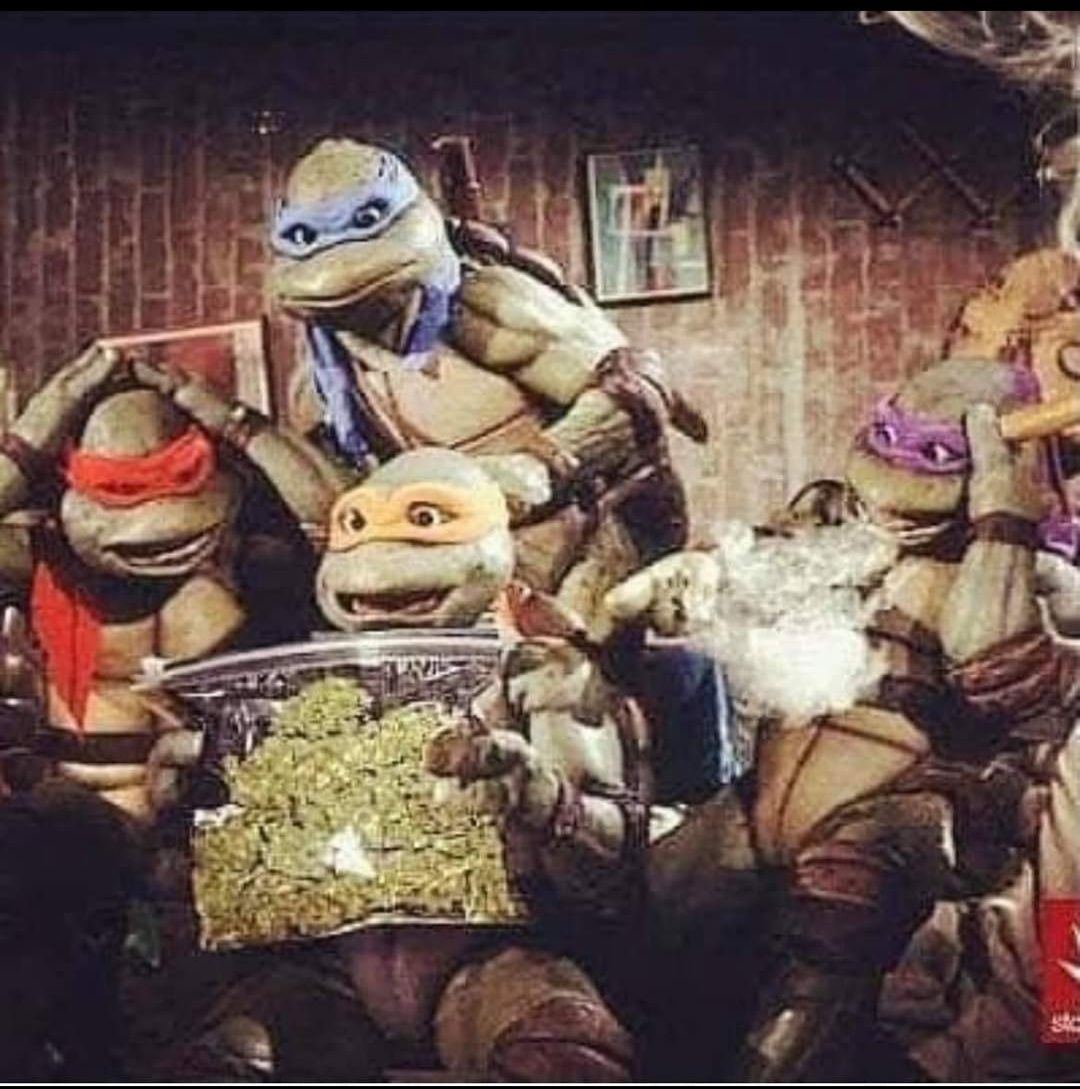 Start of week 3 for this gorilla lemon fire clone.

No luck at all with the best coast seeds. I'll give them another week before trying the rest of them. 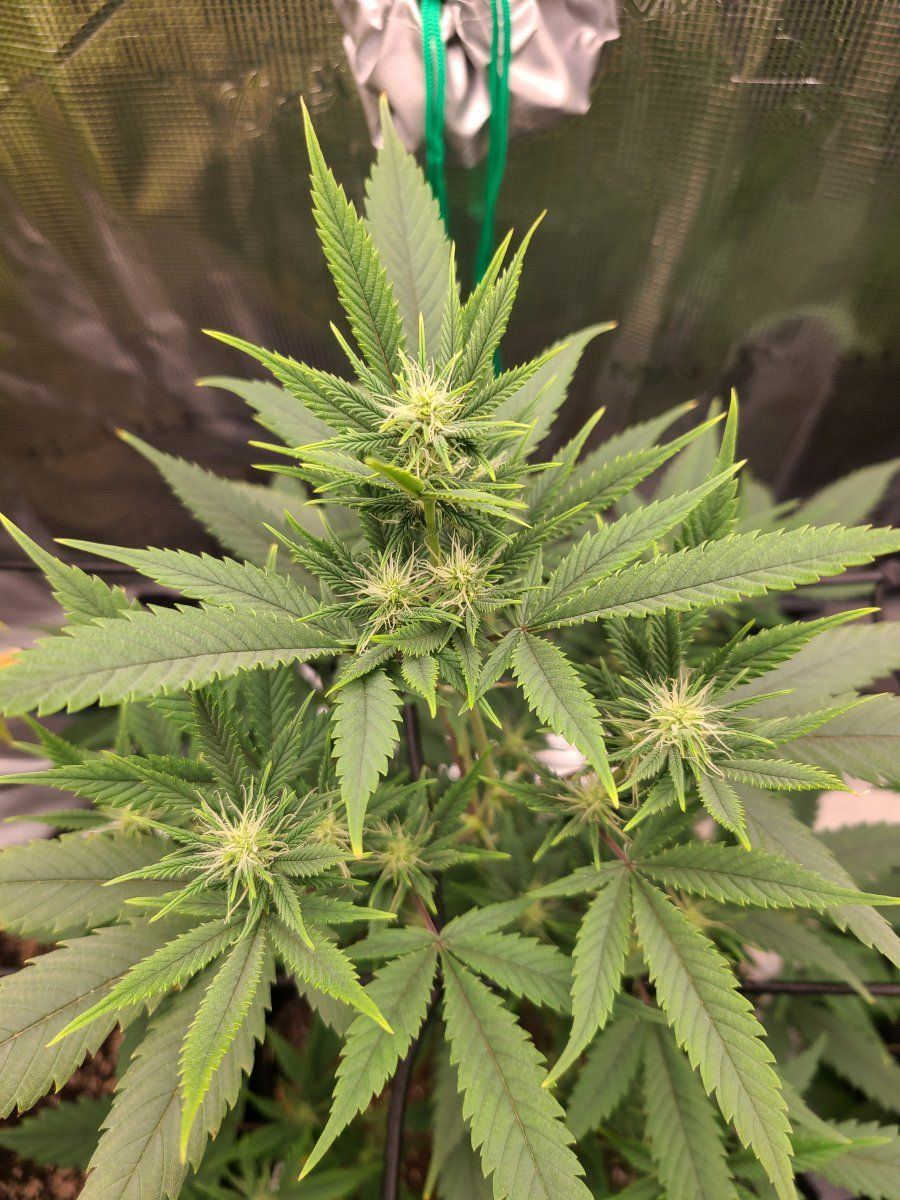 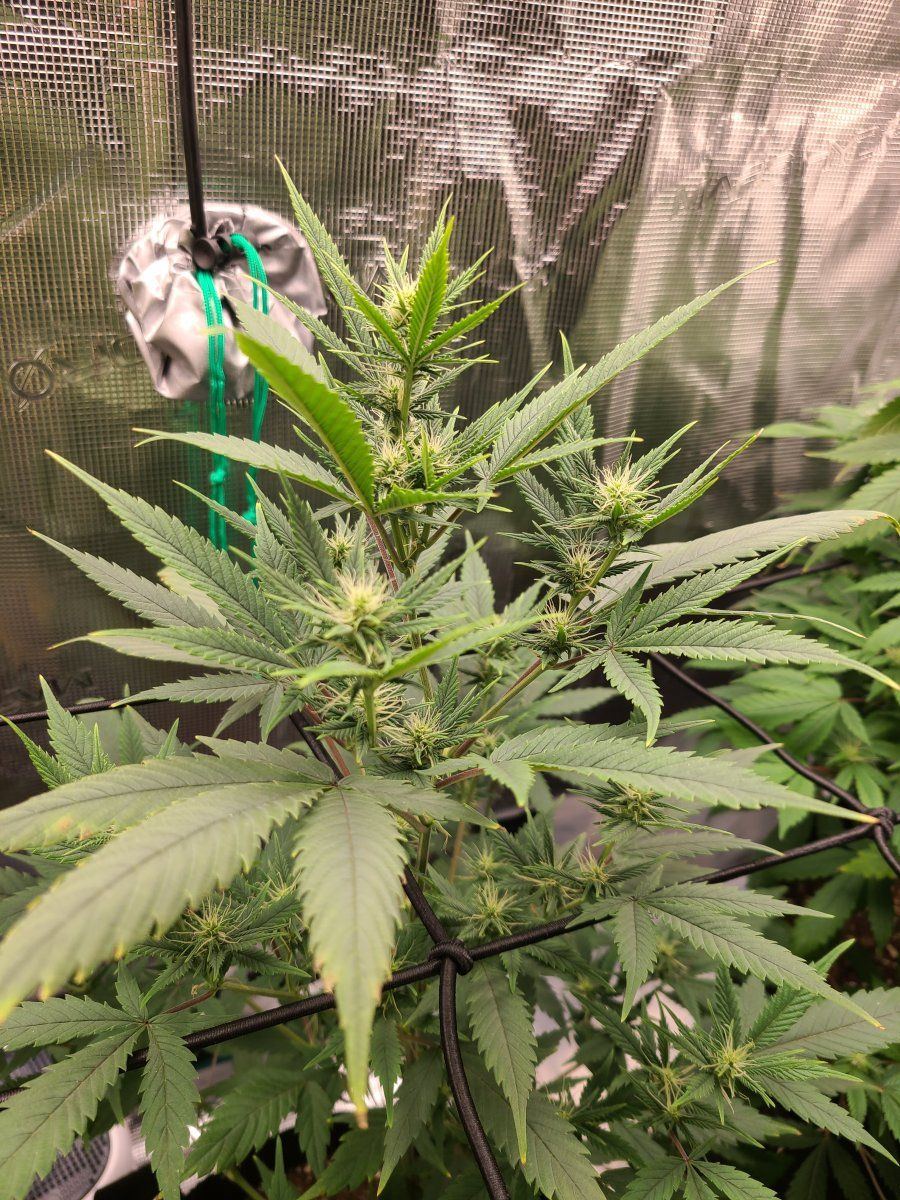 It seems I figured out my germination issue. I didn't think any of the 5 Lake Tahoe seeds would pop since the first 2 did the same shit the banana soft serve did, barely crack open and die, so I planted the last 3 and all of them popped and are looking good. Maybe ill get really lucky have have all of them be girls. Sorry for the shitty blurple light pic! 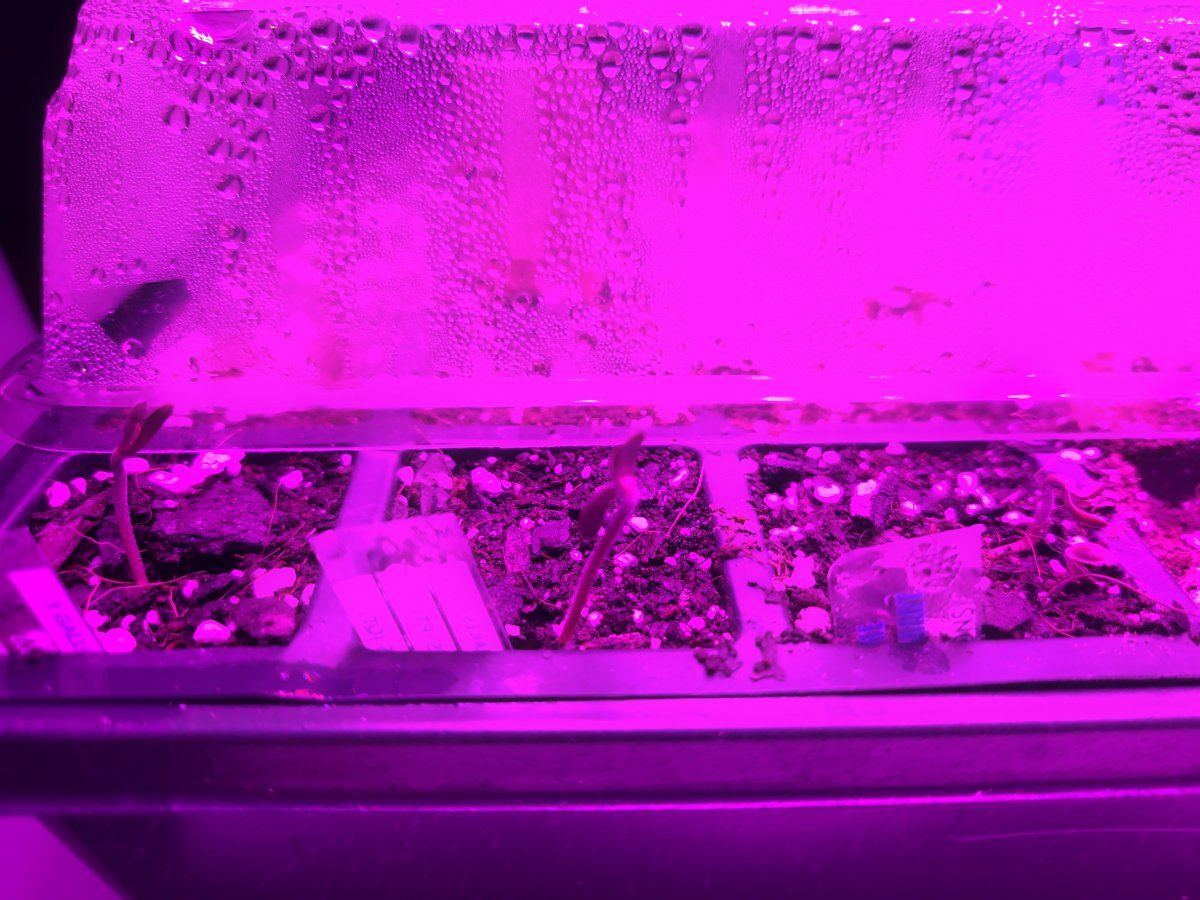 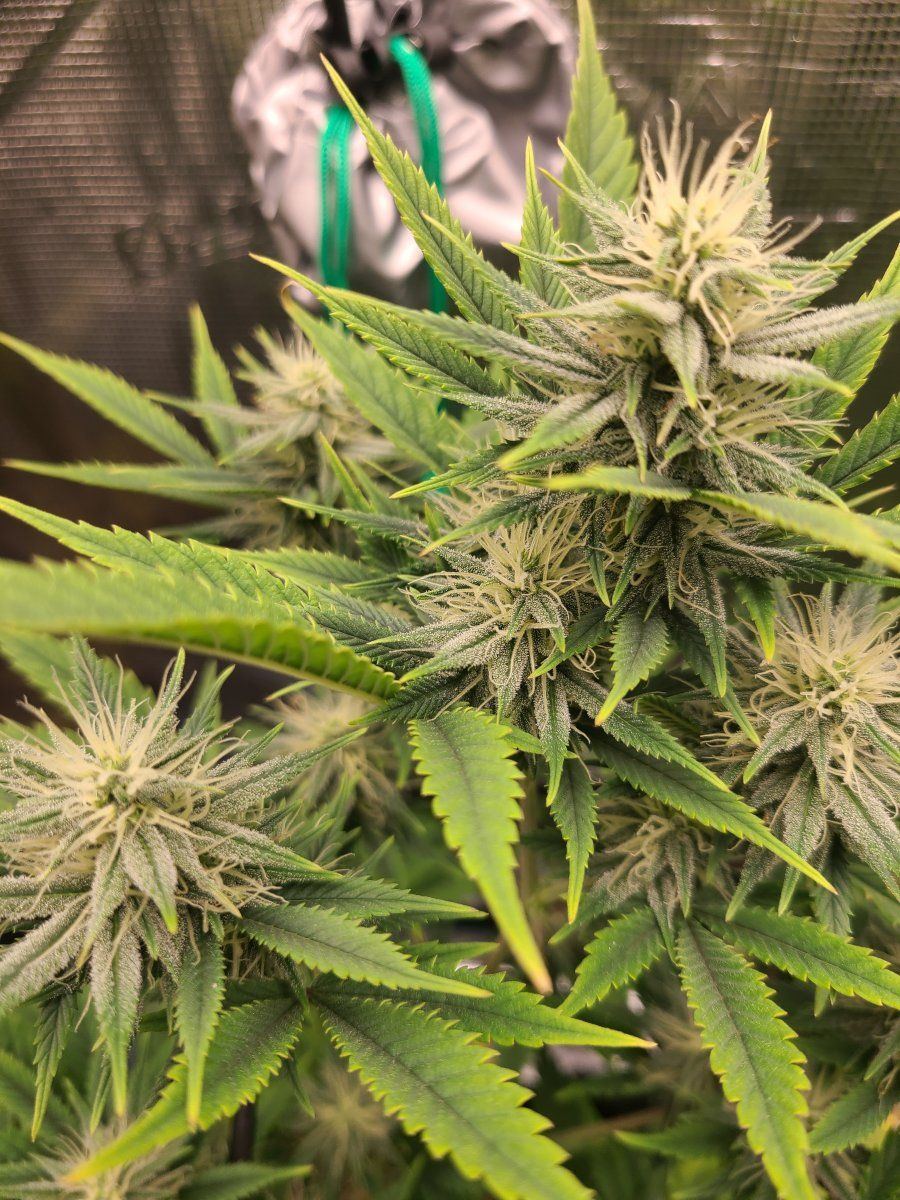 Hello everyone just want to say thanks on all the help