Science on loss of vigor over generations of clones?

I have cloned from clone from clone for at least a year doing aeroponics never kept a mother ,then after that I made a mother from a clone and I am stiil seeing some of the best product from 20 generation old clones

Really folks, 99% of the growers on these forums don't have any growing skills whatsoever - stop blaming genetics, bugs, virus's, whatever - it's Grower Error.
Click to expand...

how many of yall keep seed moms?

Ne Obliviscaris said:
Part of having 'growing skills' is knowing about the life cycle of the plants you're trying to grow. Like what happens when you clone across many generations. Assuming you know everything important about plant biology makes you a shitty horticulturist, regardless of what you're producing.


On a more positive note, I've got a meeting scheduled with a doctoral candidate in botany this week. Asking about genetic degradation is at the top of my agenda, and I'll post whatever I learn in this thread.
Click to expand...

OH THANK GOD! SO FEW PEOPLE GROWING THIS PLANT HAVE EVER BOTHERED TO GET BASIC HORTICULTURAL INFORMATION--CUZ YOU KNOW, IT'S A PLANT. A FLOWERING PLANT, and there might be some folks who have some experience with flowering plants. Cuttings degrade not because of genetic degradation due to cloning, because you know, we're not cloning genes--we're taking cuttings. FROM AN ANNUAL, NOT A PERENNIAL. You know, cuz it's a flowering plant...it has a life cycle. A short one. I know. I'm a bitch, but this shit is ridiculous. I need to get off this site.

Lol....bud...why are you flipping your shit at a post made in 2011?
Just say no to ruderalis and fem seeds.

@gravekat303 eh, I'm just sitting in an airport due to a delayed flight. I appreciate the weirdness.

Try BudBud.us app and you will be able to track every single plant and every single bud for centuries and definitely prove whether or not there is difference in clones over the years.

Funtcas3 said:
how many of yall keep seed moms?
Click to expand...

I always have.
D

so real shit, yall been arguing over this shit for 7 years! please tell me by now, someone has a dam answer with some prof to back it.... I mean shit if 7-8 years isn't enough then wtf are we doing, dam stoners lmfao

Ne Obliviscaris said:
I've been taught, and it seems like the science on general horticulture suggests, that each generation of clones--meaning clones of clones, not rounds of clones taken sequentially off of the same mother--reduces the vigor of the stock.
Click to expand...

There is no peer reviewed science to support this assertion. Clones are just that - Clones.
"Flowers always make people better, happier, and more helpful; they are sunshine, food, and medicine to the mind."
―Luther Burbank

Personal medical gardener in full compliance with all state laws.

Santa Cruz Blue Dream is almost 20 years old and it is without a doubt the most vigorous plant I grow.

purpleberry said:
I had a nice cut of Querkle that purpled for me everytime, even in heat it would purple up if left for 9 weeks. I moved on to some other stuff and gave a cut to one guy and two nice mothers to another. The one guy tell me it dont purple up any more, Says it always stays green even in the cold. I figured he mixed cuts up. Then the other guy tells me one mother turns purp and the other stays green, but they are the same. I check out the first guys bud and its the querkle i gave him but green. Crazy that one mutated like that. Im going to try and get a cut of each one and see whats up.
Click to expand...

Why would you assume this was genetic rather than environmental?
P

hyzerflip said:
There is no peer reviewed science to support this assertion. Clones are just that - Clones.
Click to expand...

So all the best growers are just wasting their time and money cleaning up all the old clone-onlys via tissue culture? Did you grow that blue dream 20 years ago? It may be that it’s viral and possibly some varieties are more resistant to disease; much in the same way certain varieties are more resistant to pm, insects etc. Broaden your horizons my friend the knowledge is out there :)

PharmHand said:
So all the best growers are just wasting their time and money cleaning up all the old clone-onlys via tissue culture?
Click to expand...

Gotta agree with hyzer here. If that first gen of clones from a mother are genetically identical, as they are with clones by definition, then each of those clones should put out genetically identical clones to the mother. Plants can absolutely get pathogens and whatnot that leave it in a weak state, some cannot be cured, tissue culture is really cool for being able to fix that sort of issue. TC or traditional clone though, you are getting the same result, an identical plant to the donor since it is being grown from a part of that donor.
D

so according to yall, the final say would be it's all a myth?

I appreciate everyone's that's taken their Time over the to contribute to this!;yall are great!
P

Said nothing about it being genetic or that tc could somehow repair genes??? It’s also a cutting not a clone. Tc can renew lost vigor

PharmHand said:
Said nothing about it being genetic or that tc could somehow repair genes??? It’s also a cutting not a clone. Tc can renew lost vigor
Click to expand...

TC eliminates the pests and pathogens that can cause a loss of vigor. Plant pathogens are very common, and the clones we trade undoubtedly carry many.
P

hyzerflip said:
TC eliminates the pests and pathogens that can cause a loss of vigor. Plant pathogens are very common, and the clones we trade undoubtedly carry many.
Click to expand...

Exactly. The name of this thread is “the science on loss of vigor over generations of clones”. I offered a hypothesis on the likely cause of “loss of vigor” and a potential solution -TC. Not sure where the confusion here is? Did y’all read my posts? Plant viruses and pathogens reducing vigor is most not a “myth” @DrGreen420. Feels like I’m talking to a brick wall here, I’m out 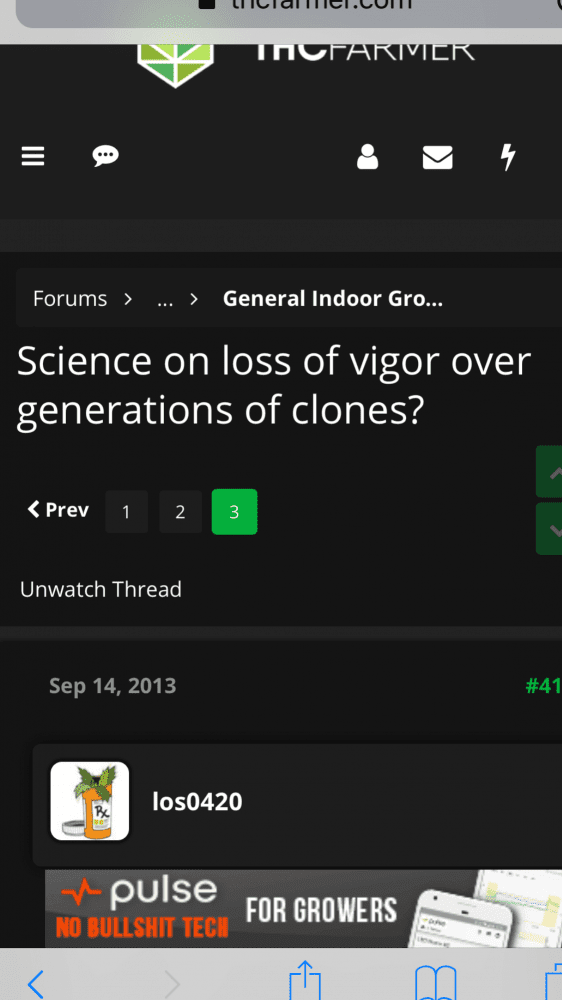 Deformed top growth on a few of my girls

Looking for advice on moving to a living soil setup for a perpetual 12/12 from clone.