So How Did This British Cop

So how DID this British cop become America's cannabis king? 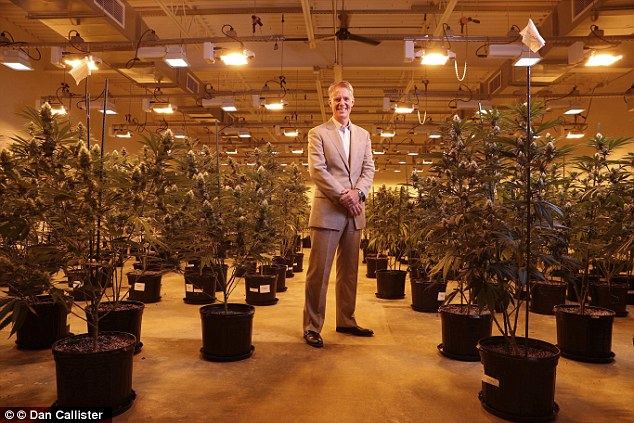 During almost five years on the beat, patrolling some of the roughest parts of London, Mike Abbott arrested dozens of people for drug offences.

As a young recruit he picked up people carrying cannabis on the street in areas such as Brixton, and later participated in undercover operations against major suppliers.

‘The stench of hash was becoming more prevalent,’ he says. ‘My job was to uphold the law and cannabis, like other drugs, was illegal.’

Ex-Met Police officer Mike Abbott runs one of the most successful medical marijuana firms in the United States, Columbia Care

Three decades later, Abbott is a high-flying businessman. Yet given his background, there is a certain irony that his latest venture has seen him emerge as among the biggest legal cannabis dealers in the United States.

For this former member of the Metropolitan Police now runs Columbia Care, the largest player in the emerging market for medical marijuana in the United States. Sale of the drug for such purposes is now permitted in 25 of the nation’s 50 states.

Abbott’s fast-growing firm – set up with a friend and former colleague from Goldman Sachs – has opened dispensaries from small towns in Arizona to major cities such as Boston, Chicago and New York.

These outlets are sober in appearance. But the goods on sale would once have led to instant arrest by the firm’s boss: potent buds from marijuana plants; cannabis cookies crafted by some of the 211 staff; and specialist inhalation equipment.

Supplies come from a string of high-tech greenhouses and warehouses. The firm has thousands of plants growing in seven states. Amid bold claims for the curative powers of the drug, demand is rising so fast that Columbia Care is expanding rapidly. It expects to grow more than five times as many plants next year, producing at least ten tons of the crop to harvest for more than 200,000 patients.

The success of Abbott’s three-year-old firm – already profitable despite tens of millions of pounds of investment – underlines the astonishing pace of cannabis reform in the country that launched, and for decades led, the global war on drugs.

Another eight states ballot voters in November – three more for medical use and five, including California, questioning whether to join a quartet already backing legalisation. It is estimated sales in the Golden State alone could top $7 billion a year.

Mr Abbott (pictured, second row, five from the right) served with the Special Patrol Group on the streets of Brixton after joining the Met in 1983

Abbott is focused on the medical market, and argues that his police experiences helped influence his unlikely change of direction, selling cannabis products to patients with conditions such as cancer, epilepsy and multiple sclerosis.

‘Why should people with a medical need risk being arrested?’ he asks. ‘This allows them to go to a regulated environment rather than a street dealer, avoiding a waste of crucial resources and helping criminals.’

Certainly, it is a long way from the days in 1983 when a school-leaver from Liverpool joined London’s police force at a time of intense industrial and racial upheaval.

‘I loved serving with them but it was a very difficult period,’ recalls Abbott. He found himself on the front line of the miners’ strike as a member of the Special Patrol Group – and patrolling Brixton, where cannabis use inflamed tensions. Bizarrely, he met his American wife Jana on an undercover operation – he fell for the then student, who was enjoying an innocent drink in a Chelsea pub that was under police watch for suspected drug activity.

Why should people with a medical need risk being arrested? This allows them to go to a regulated environment rather than a street dealer

Today the couple have three children. The eldest two, both teenagers, asked their nine-year-old sibling what he would tell teachers at a new school if quizzed over what their father did. ‘I’ll tell them he makes medicines,’ came the response.

Yet Abbott, 52, admits most business friends thought he was ‘crazy’ when he told them he was entering the marijuana industry after a career in top-level finance – he worked for banks and a hedge fund after leaving the police. Old pals from those days on the beat just made jokes about dope dealing.

One key person was supportive: his elderly father, a former hospital doctor, who told him if he could collect data on any medicinal properties of marijuana then he would be doing a wider service to society.

It was Abbott’s business partner Nick Vita who first heard about a medical marijuana firm. He tracked it down and was impressed after giving cannabis cream to his mother, who found it alleviated crippling rheumatoid arthritis.

The pair began as passive investors but now run the firm. Vita says he has never smoked pot, while Abbott admits trying it at university after leaving the police.

The fledgling firm made some mistakes at first such as hiring people who had grown illicit cannabis in basements. ‘It did not take long to realise the hippies were wrong for us,’ says Abbott. Today they use academics from the Mid West to advise on farming techniques.

I found tight security when visiting the firm’s New York production centre in a former Kodak plant near the Canadian border.

Inside the first room, a woman was carefully watering hundreds of plants in varying stages of growth, each worth $5,000. It was strange initially to wander around rooms filled with cannabis sprouting up under bright lights.

I estimated there were 2,500 plants at this single 50,000 sq ft centre, which opened in Rochester after Columbia Care won a licence last year to trade in New York. The site is being prepared already for a fivefold expansion over several floors.

Another in Massachusetts cost $6 million to open. It has 60 strains such as ‘California Dreaming’ and ‘Strawberry Amnesia’ growing in eight ‘flowering rooms’.

Recent polls found almost nine in ten Americans back the idea of people being allowed to use marijuana for medical purposes. A narrow majority support legal recreational use, although it remains controversial with 41 per cent still opposed.

Colorado, the first state to permit recreational use, now raises four times as much from cannabis taxes as from alcohol.

But there is still fierce debate over the consequences, with concern from parents over sales near schools and a sharp rise in cannabis-related emergencies in hospitals. There are suspicions that criminal drug cartels, seeing profits fall from cannabis, are promoting harder drugs with more vigour. Studies have also linked regular use in adolescence to depression and schizophrenia.

Abbott aims to build a big pharmaceutical firm based on cannabis, arguing he operates in a different market to the recreational one. ‘I’d love to bring some lessons we have learned here to Britain,’ he says.

She says she has seen patients get off opiates, seizures end for children with complex epilepsy, and cancer patients given a fresh lease of life. Her most memorable case was a woman in her 30s suffering brain cancer who was preparing to go into a hospice. She says the patient’s tumour shrank 40 per cent after taking cannabis, her weight rose and she was given several months extension of decent life. ‘I’m not saying it’s a cure but it can improve quality of life,’ says Reed.

These are big claims, but they help explain why a former London policeman has become perhaps the world’s least likely cannabis baron.

‘Of course we want to build a profitable business,’ says Abbott.

‘But I think we can also do a tremendous amount of good for people with serious health problems. That’s the real challenge.’

lol..and those he arrested, should track him down and throat punch this slimy fuck
You must log in or register to reply here.

Up in Smoke. Philippines police smoked 880 plants 5 days ago