Trustfall said:
I want to play LoL, happy birthday you got about 15 years in me.
Here is some Colombian red(this is a friend of mines pic up in Canada)
He does these long flowering sativas under the bar style leds and they look great I think.
Click to expand...

I remember that stuff well. That was my bread and butter all the way though my early years, until I hit my teens. That and also the Panama Red, and the Acapulco Gold, the Maui was a bit later.

I've got an Acapulco Gold I've been raising, have high hopes for.... Bring back some taste from the early years again... Sure hope it's a girl, but I think I'm in luck, because all the other seeds from that source have been feminized so far.... This seed was marked from years 1999 on the package, and it sprouted from a single leaf. The bottom pic was earlier on... She needs to be flipped soon. 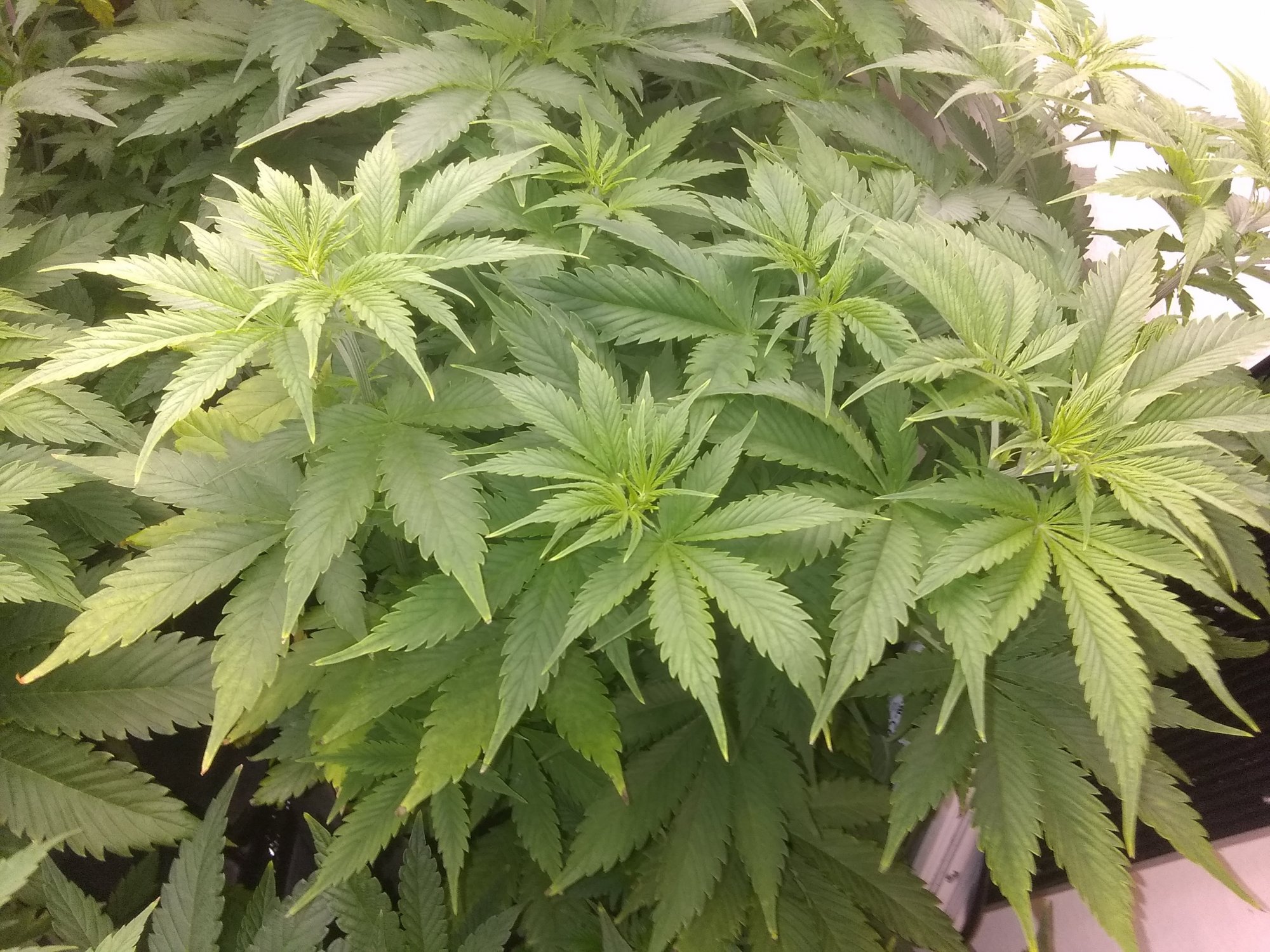 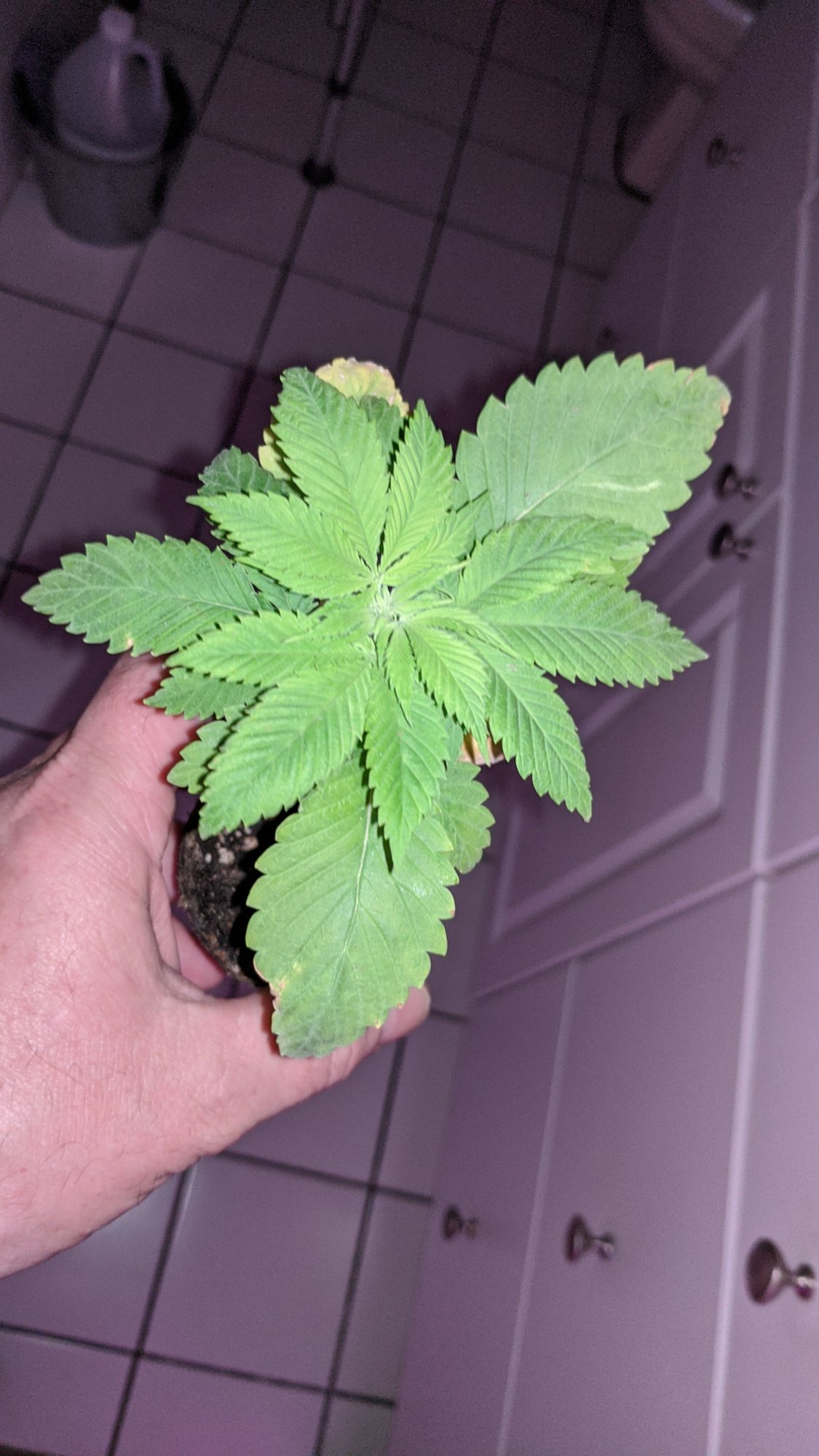 Frankster said:
Yea, my gues is the coffee killed them, probably too acidic. Looks like good shit, I don't drink anymore, but when I was in the military I used to drink gallons of that crap. Especially the Mezcal. Good times. Was fucking a smoking hot Cajun back then. I should have married her. 1984, those were the days.

I needed that shit, because I couldn't smoke much pot at the time. Loading bombs, guns, missile's up on racks everyday. Good thing I don't have anyone's dead kids under my belt, that would be a hard one to live with. Just putting my hands on that shit gave me the creeps.

Yea, good idea not to be around idiots while drinking that, and don't forget to eat the worm.
Click to expand...

That’s what I was thinking plus the moisture.
I don’t drink very often maybe once or twice a month.

Am I the first to read your other post in potm lol?

iX_Lazy_Xi said:
Am I the first to read your other post in potm lol?
Click to expand...

I read that also, very generous of him. I probably have 50 posts with my old screen name. I had to re login and don’t remember password and my email is a joke. Old name is Harvard. I’m quite computer illiterate.

That pic just popped out to me. People have to remember all the high end clones come from seed! I need to get to popping more beans!

If you have some of the seeds left I’d like to try them out,they regular seeds

iX_Lazy_Xi said:
Am I the first to read your other post in potm lol?
Click to expand...

Yes!
@iX_Lazy_Xi
@budgie
@Smithers
@GrowHobo
@Chem77
Dm me an addy to send them too. Smithersi got your addy already.

I’ve grown out all of them original diesel,donkey butter,Indiana bubble gum, sk1 and odx all hit with a c99 male.
You may be getting some of the others beans as well. The Cindy is dominant inthe cross but you will find gems like the potm donkey butter. I had an original diesel x c99 thy looked exactly like that but no purple and was was my first seed I popped and didn’t take a cut of it. Haven’t found it againand I’ve grown about 15 of the Od x c99 pheno’s. I found a couple more pheno’s one pine and one pineapple but not as good as that first one I found.
Your basically going to find pine or pine Apple in all of them but the donkey butter will add grease flavor, original diesel will add hash flavor,odx citrus, Indiana bubblegum is obvious and I have found a pine IBg out of just three pheno’s but i am going to hunt these againbwcauae I wand a fat calx pheno like the IBg with some pineapple hehe. And the sk1’s will be the best first smoke of the day on a 8 week strain you will have. So tasty so up and mood elevating. It’s a once a day smoke though.
When you get them and have any questions feel free to ask in here.
And @Rootbound you already know your welcome to them lol.

Here’s the IBg x c99 I cut today. Got a little fox taily but fuck me the gnats took over this room and spread pythium all through out and crown rot. Still a few nice buds but next round will be better.
This is the IBg pine pheno. 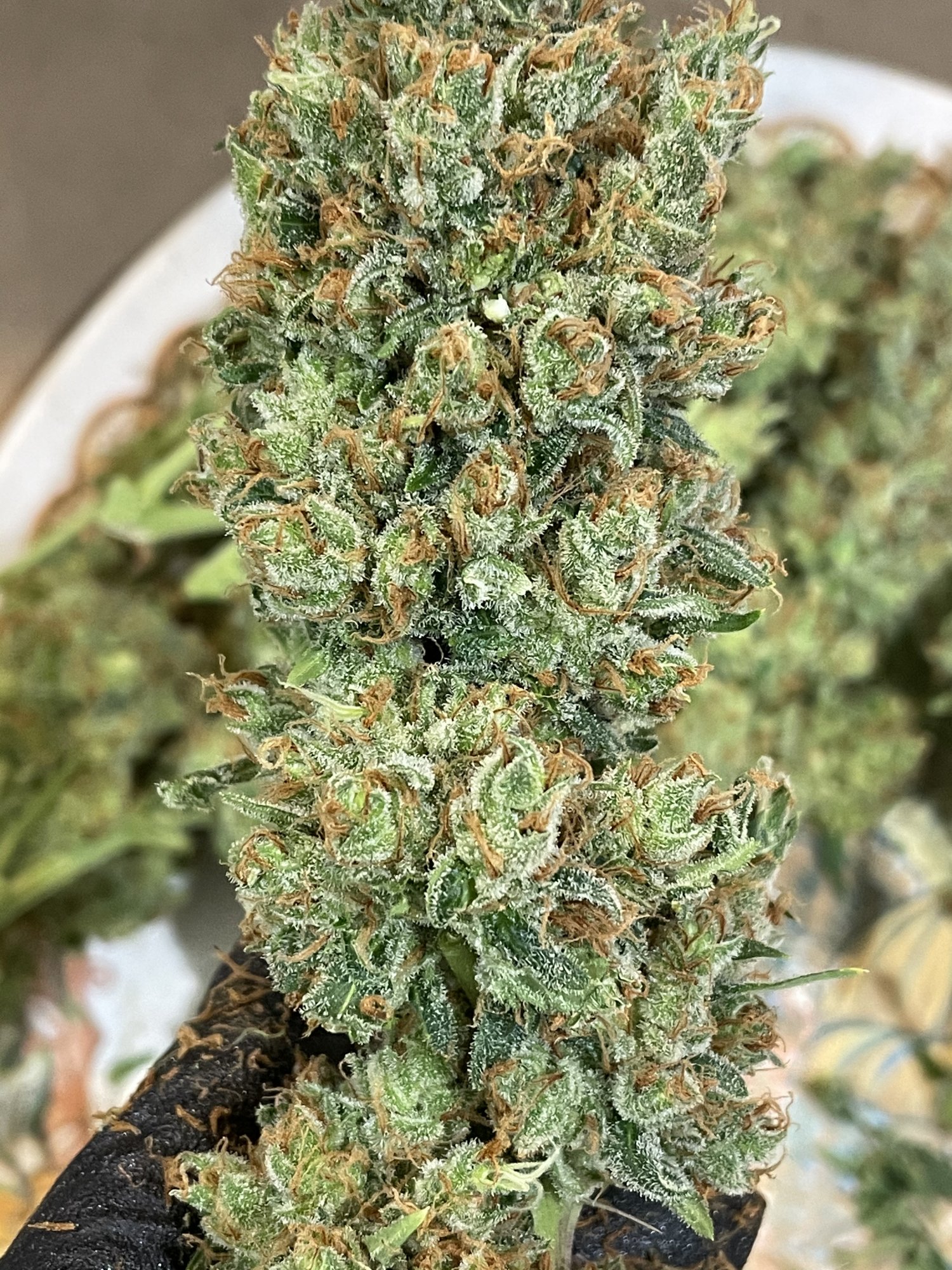 Trustfall said:
Here’s the IBg x c99 I cut today. Got a little fox taily but fuck me the gnats took over this room and spread pythium all through out and crown rot. Still a few nice buds but next round will be better.
This is the IBg pine pheno.
Click to expand...

Hi if i am still with the first 10 i would happily accept your generous offer.
Beautiful Pic the winner of POTM.

Beautiful work my friend!! @Trustfall
Harness the Light and the Dark,
Only then,
Shall you move Mountains.

I’ll be getting the state side packages out this week guys most likely Friday. And I will need another week before I can get the international guys there seeds but bare with me.
Here’s my original diesel clone plant 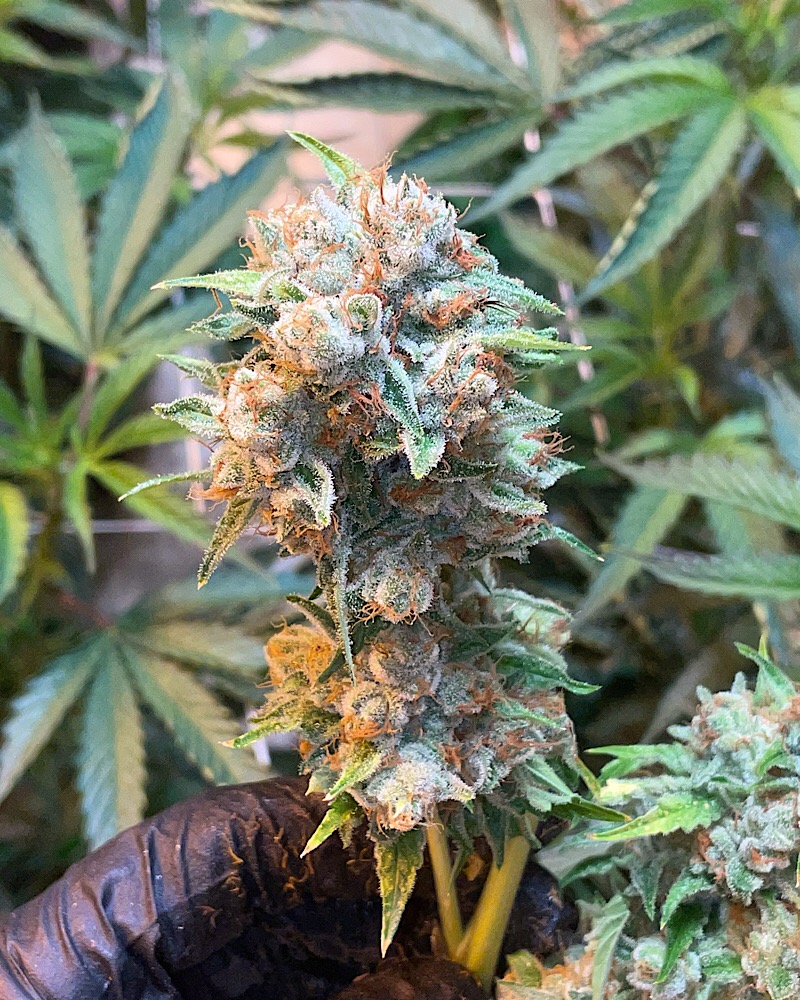 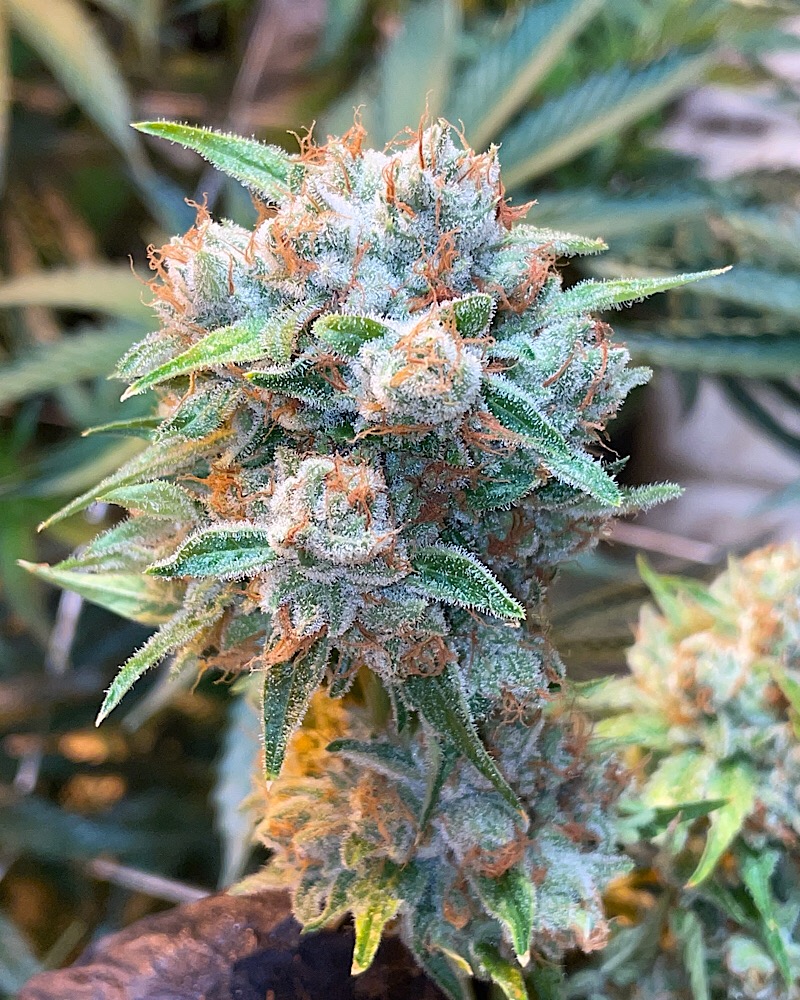 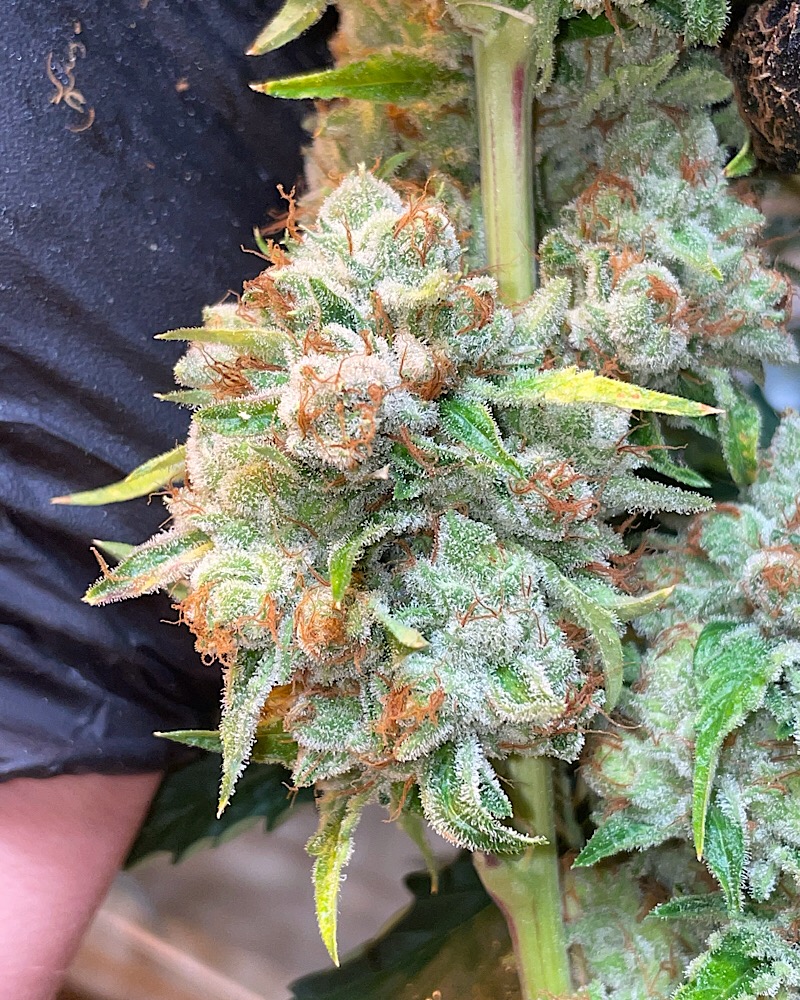 And here is the original diesel xc99 seed I found. This is the second best out of about 15 females. I lost the best one because it was 1 first seed just to check out what I made and didn’t clone it lol.
But if you know Cindy she’s not very pretty but the Od definatly shines him up. My pine pheno 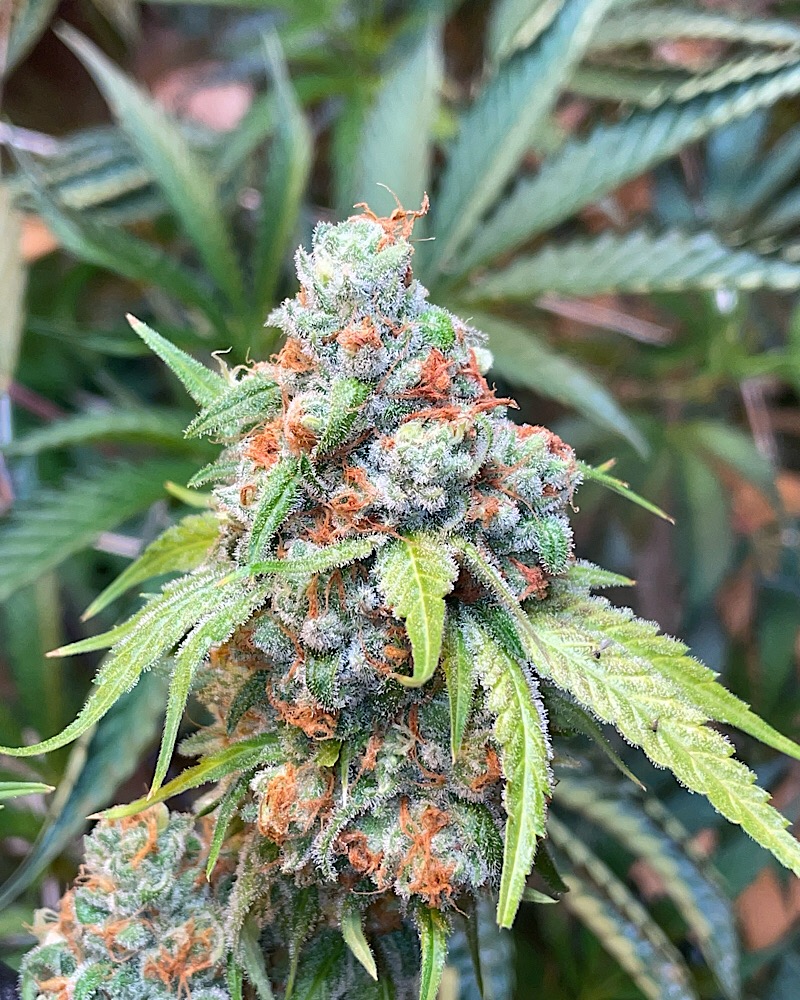 God I love seeing nice bud pics without the purple look! Love the bright hairs on them.

Rootbound said:
God I love seeing nice bud pics without the purple look! Love the bright hairs on them.
Click to expand...

Oh me too! Especially when the trichs turn milky, leaves green and yellow then those orange hairs really pop.
The sk199 keeper I found has almost gold dries buds. Going to do another run of it soon in the coco system.

Trustfall said:
And the fade Im getting..

Gorgeous of course, feel free to throw extras my way

How ya been? Ain't been on here for a hot minute. Killed & restarted my stuff (spider mites & no time to deal with them so killed everything off & cleaned & restarted last of my seeds, have to buy more in near future)
DOD

What do you think here?

Seed banks and "out of stock"