Want to become a serious breeder

I've been trying to dig and do research on what it takes to legally become a breeder in the usa but that would involve me being able to grow more then just a few plants. How would I go about legally being able to grow enough plants to actually become a serious breeder and make my own company, strains, ect. I've got enough exsperiance and knowledge to do it once I know all the legal parts but no idea where to look to find answers about how to legally grow that kinda numbers.... help!!! Please.
S 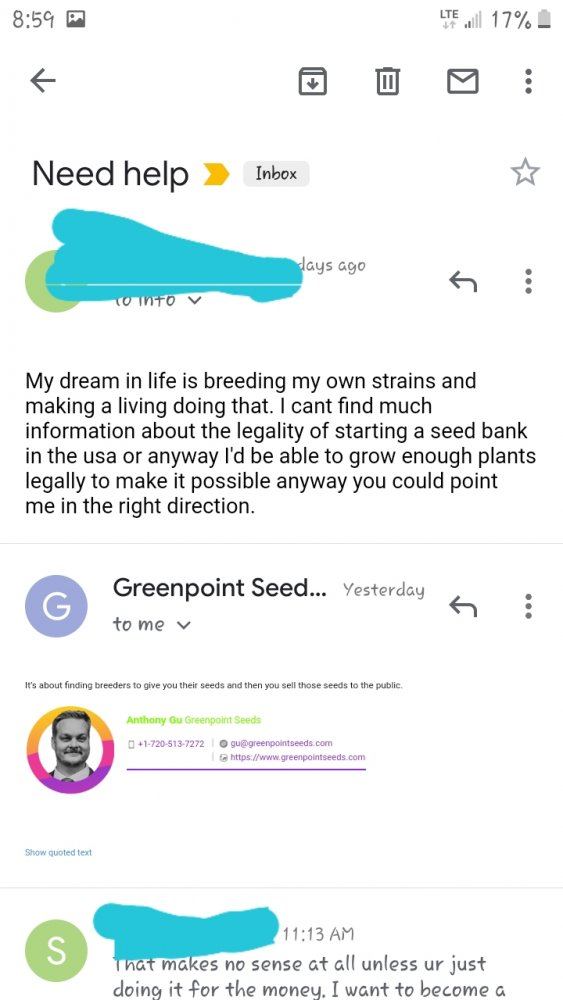 My advice to you is talk to a lawyer. You said it yourself you dont know what to do when it comes to the law part

Then again who worries about the legalities? If we all worried bout that stuff we would not be where we are at today. Dodging copters and the man since 1972. However being legal is way less stress, I will admit that. lol

That’s awesome you’re so eager to get into breeding. You should read some of the shantibaba breeding stories, he’s got some good info on how the industry works. Find an American breeder that’s allready doing what you want to do and ask to pick their brain. Give them the opertunity to brag a little and they’ll give you all the info.

In the meantime I hope you’ve allready got some crossing done or legendary phenos ready to breed. Real pheno hunting can take hundreds of plants and then pollination and back crossing is a two year process. Unless your going to sell hermi seeds like most of the Canadian sites I’ve been dealing with lately
S

Sorry if I caused any confusion In my first post i mostly care about being able to breed new strains but I also want to make a living doing it as I have a family, so I'm not that picky about how I get to that result whether it be being a seed bank or just breeding and partnering with a seed bank already existing. I've reached out to a few companys and cant get much more then the response I've shown here. I've been growing for around 18 years now so I fairly well know what I'm doing with growing but I'm still learning how to breed properly and I have some new strains in the works but nothing close to finished as I wouldnt sell anything to anyone i wasnt proud of myself. Any suggestions at all are more then welcome not just with the legal info but also with threads for breeding information. (Always room to learn more) I just know it's my dream in life to make a living working with my own strain creations. It's what I wanted to do with my life since I was 11 years old and got my first copy of high times magazine. So once again any suggestions at all are welcome, the more the better and also thanks in advance.

I would contact or check out NORML, they have the most up to date info regarding legalities and the info you are seeking and deal with international stuff as well. There are a hundred new strains every month, so it is pretty competitive and legalities can easily make growing much less profitable. Do your research, maybe contact a hemp growing operation if possible and learn some basics. Every journey begins with one step.

For the last decade new breeders have used the forums to show their work and get customers started to make a name for themselves.

Some real famous ones come from here.

Now everyone is a breeder (chucker). The seed breeding business has become a pathetic joke. Hobbiests trying to sell untested seeds and bred from the only male they have.

Real breeding takes hundreds of plants run over and over. No one is really doing that. Just borrowing supposedly elite clones and crossing them.

No money in quality breeding in the legal market. Better get posting and chucking and hope for luck.

The biggest thing right now seems to be pretending you are a preservationist and have saved tons of rare cuts of landrace plants. Lol.

Damn i am disapointed in legal(read regulated) weed.
S

If u dont mind me asking why is there no money in quality breeding? Wouldnt having quality product make more return customers then just throwing trash out in the Mail?? I'm not looking to get rich by any means just would like to be able to provide for my family while I do it if it's possible.

StonerStan said:
If u dont mind me asking why is there no money in quality breeding? Wouldnt having quality product make more return customers then just throwing trash out in the Mail?? I'm not looking to get rich by any means just would like to be able to provide for my family while I do it if it's possible.
Click to expand...

Because the new market has a strain of the month mentality. And it is beyond flooded.

I figure 2-4 years to properly breed and stress test and ensure viability and stability for just one good breeding strain.

Then you can make proper crosses.

Thats what the old school guys did. And there plants are better than these new short flowering high thc little plants most everyone is selling pretty much untested now. In my opinion and experience anyway.
S

I was hoping it would go something along the lines of aquire a growers permit and while I'm working on breeding multi task and also be supplying cheap flowers for despeceries to help cover grow cost and hopefully turn a profit then once I have a good stable true breeding strain or 5 finished try and focus more on selling seeds then pushing bud. I know it will take a few years just to get up and started but to me it would be more then worth it. My idles are D J Short and Robert Bergman. Short is my favorite breeder of all time for the quality of his genetics but robert has one of the best ran seed banks I've ever had the pleasure of doing business with even when the strain selection is rather limited.

I truly wish you the best of luck. Sounds like you have the drive to succeed.

I will stay out here in the woods laying low. The dispensary i was contracted with a few years back was raided and they are all in federal jail now.

I only have a med card so they didnt come for me.

MIMedGrower said:
The biggest thing right now seems to be pretending you are a preservationist and have saved tons of rare cuts of landrace plants. Lol.
Click to expand...

Right? Even for landrace nerds like me, it gets annoying. Looking for a landrace on any of the major seed banks? Have fun wading through dozens of mislabeled big bud and skunk #1 crosses from such specific locations as "Hindu Kush," to find legit ones. It's some bullshit.

If you look at the economics, while several states have legalized Mj to some extent, the majority of them don't allow growing. Now, take a look at the seed bank on this forum. There are a zillion vendors selling a zillion strains, with each claiming to have their own strain that is being sold a bunch of other places as well. Many newer companies are just guys who got a few decent plants and grew a batch of seeds... again, untested and full of issues. Growing a great strain is a great ambition, but it takes a lot of work and twice as much patience and record keeping. The shame of it now is that the old school strains are being lost to the new hybrid and auto craze. I guess it's like wine making. Some vinyards have a truly great wine, while others grow for the volume and the ease. One is designed to make money and one usually eeeks by for decades before it gets it's recognition... IF they can make a unique and quality product that is easily differentiated from most other vintages. In today's seed world, big money and big buds are the craze. There are certainly some great and legendary strains still out there, but they are often only shared by long time friends and not available for the world...yet. I have a strain from the Alaska pipeline construction days that was popular with the workers. It is called Matanuska Thunderf**k and is pretty much considered extinct as a strain. It isn't nearly as strong as some of the heavy THC strains today brings, but for the time and conditions, they were killers. Remember, these were popular in the days when Mexican was giving way to Colombian... everything was mostly Sativa.
So, after a long ramble, growing seeds and planning on making money is a great ambition, ut you have so much competition that it is gonna be difficult. Selling your experiments can always py the bills if you are in an area that allows that, so you have a lot of thinking and planning ahead. You need something that makes you stand out as something special. Build a better mousetrap and the world will buy it and beat down your door... or something like that! Good Luck in your endeavors.
You must log in or register to reply here.
Share:
Reddit Pinterest Tumblr WhatsApp Email Link