Passing by just to remind it can be most satisfying and still affordable. It's the VaporGenie Customized/Modded to perfection. Refer to Google Images for details!


This is a complement of details relative to the "17-Holes Metal Disc": 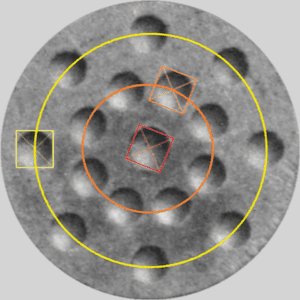 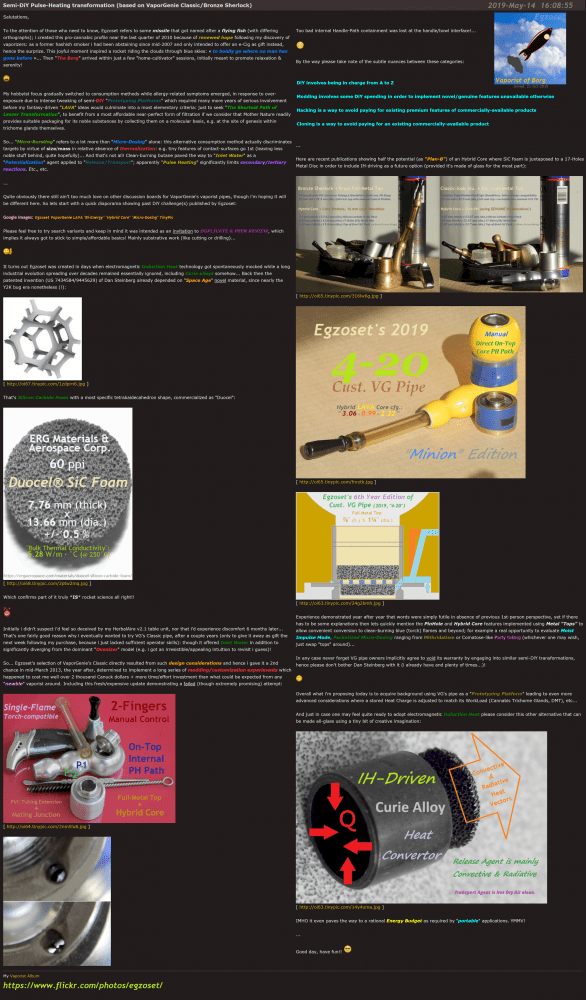 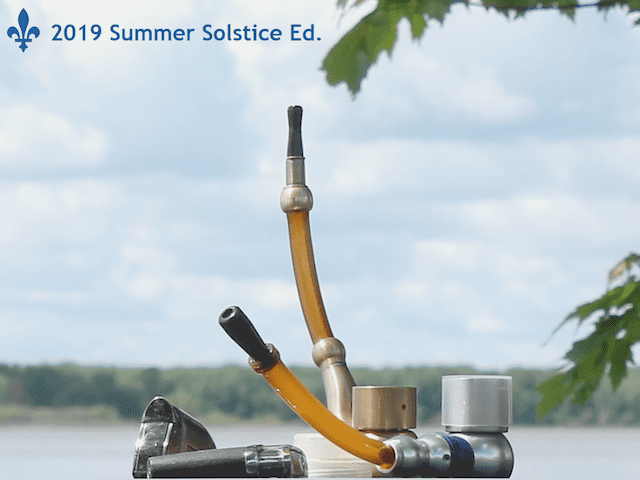 Passing by just to remind it can be most satisfying and still affordable.


View attachment 785262​
It's the VaporGenie Customized/Modded to perfection. Refer to Google Images for details!

Dang, that's a thing of beauty

Every year i think i'm finally done so it's probably safer for me now to just reply: more than yesterday, less than tomorrow! 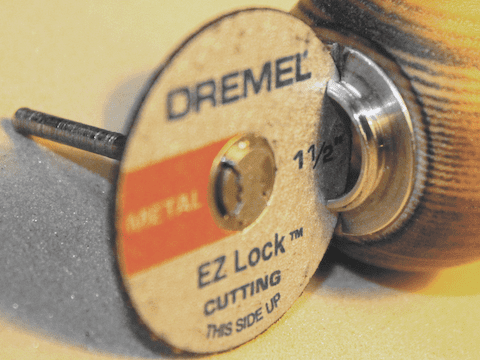 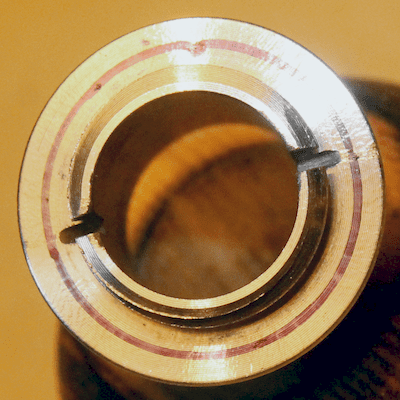 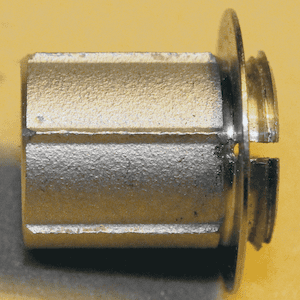 This is a Universal (Split-Paths) Twin-Cut On-Top Core-PinHole system maintaining compatibility with the Classic (wood/alu) and Bronze Sherlock handles, genuine or augmented with manual control paths. Actually a large collection of previous illustrations (even going back to 2010...) is available for download from Google Photos: 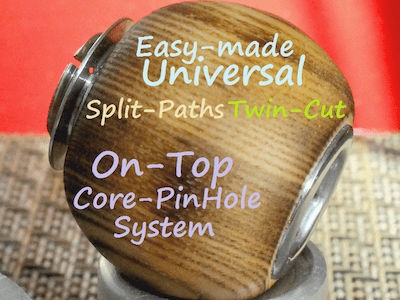 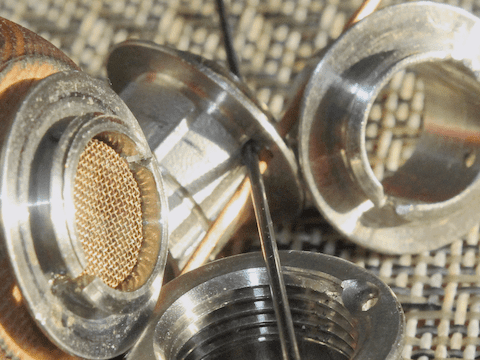 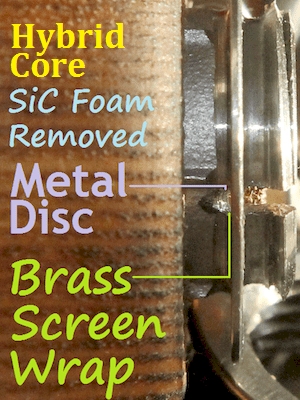 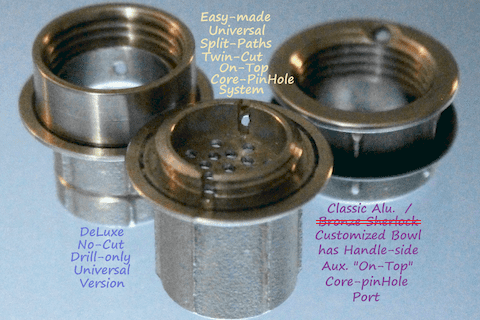 Well, i'm afraid related "DeLuxe" scenarios would call for impractical/fancy tooling as Electrical Discharge Machining (EDM), etc. By chance my "Easy-Made" alternative only involves a basic drill accessory, specifically a 1½" (dia.) metal-cutter wheel of which the diameter is critical when used in combination with these simple elementary directives: #1) draw a Containment Mark (in red) on the flat (Sphere/Top) Mating Junction around the perimeter of a Classic Bowl (dia. ~ 18.8 mm); #2) stop performing a twin-cut of the Screw Base half-way to this Containment Mark; #3) from the Flame Catcher side punch a couple Direct On-Top Core PinHoles at an angle, if step #2 went fine then only a very thin metal layer should have remained at the cut edges.

N.B.: Smooth those edges to prevent their sharp features from interfering with a Sphere/Top's normal screw action...

The customized VaporGenie Sphere/Top as presently suggested now looks like this exactly: 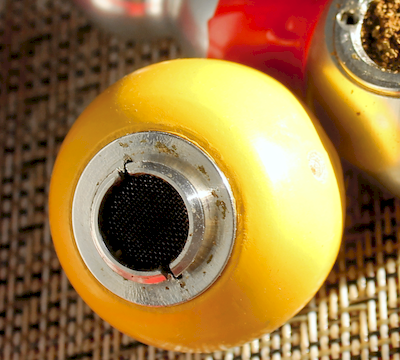 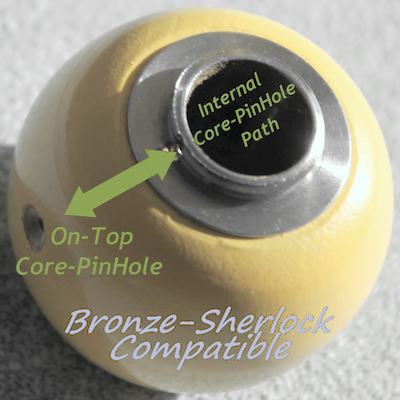 Compared to VaporGenie's genuine VG pipes the apparent difference seems minimal and yet its implications proved most essential, while the lazy (old) Permanent PinHole system shown next hardly justifies itself unless the selection of tools was really rudimentary: 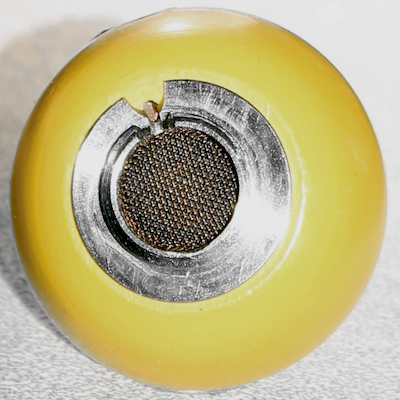 In all 3 cases my Core PinHole path was about connecting the 17-Holes Metal Disc (eventually the "susceptor") of my Hybrid Core to the Containment channel formed around my Sphere's Screw Base near the surface of its flat Mating Junction (where it meets the Bowl). That twin cut "KISS" trick practically solves all PinHole issues in a very convenient, compatible and efficient manner. The main objective being to manually control fresh air injection right past this critical core element: 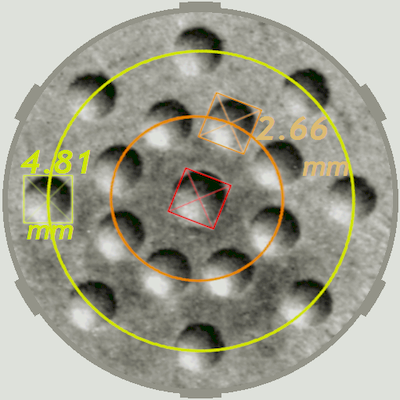 Here's a global cust. Classic view completed by an inside one (upper-left "DeLuxe" box) clearly showing the internal Core PinHole path where fresh air makes direct contact with my 17-Holes Metal Disc, between its associated "SiC Front Puck" (not seen under) and "Top-of-Bowl SiC Puck" wrapped in Brass Screen (not installed): 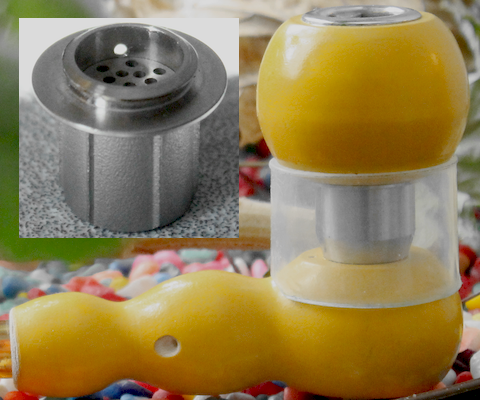 Such Hybrid Core assembly may seem more obvious if represented like this: 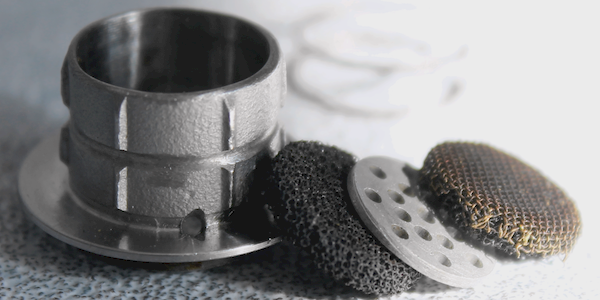 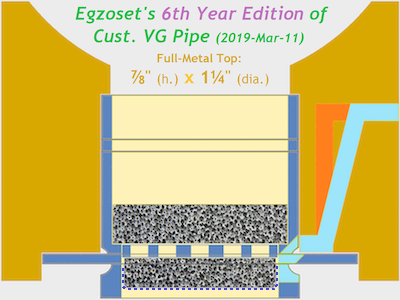 It's a "Split-Path" PinHole design which simultaneously supports manual control either from a finger-resting site located directly on the Sphere/Top itself or on the handle, which in the later case connects via a sightly-adapted Bowl, in this case a Classic Aluminium one (separated from its handle to show the hidden side): 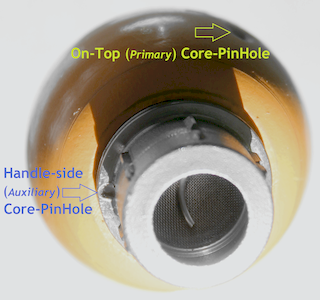 Most unfortunately the Classic Wood/Aluminium handles which i prefer for their aroma/taste performance also happen to translate into a more involving challenge as i got no easy shortcut to suggest for any of those: 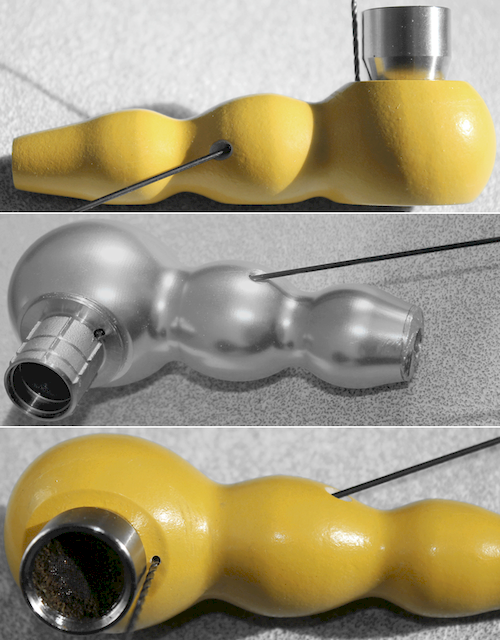 A finger-resting site conveniently located under my thumb on the handle connects my external PinHole path to the internal one via its "Auxiliary" side. Pumping action generates pressure transitions that promote airflow movement once a cloud has formed. Actually it's even an option to manually operate Fresh Air injection from both sides, though with little additional benefit i believe.

Ultimately my Hybrid Core structure paves the way to multiple IH-driven enhancements once converted to Full-Metal Spheres/Tops, for example easy Reclaim/Maintenance could result from exploiting a "Near-Symetrical Reversible Capsule" concept as this: 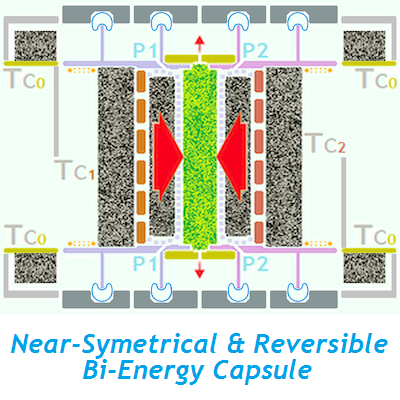 Depending on internal PinHole (P1/P2) routing it may prove quite practical to rely on such a universal system as it gets reconfigured by a simple change of handle. Shown above the heat vectors change direction by 90 degrees to implement a "Defocussing" effect while both cannabic streams converge at the center, while below these are unidirectional scenarios optionally featured with 2 heater stages (à la Sublimator): 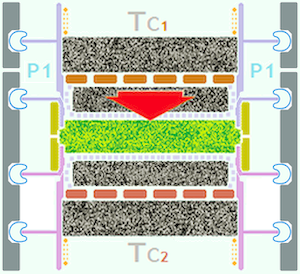 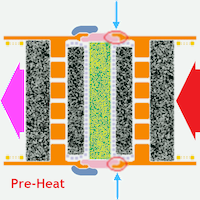 The 2nd Hybrid Core makes an excellent filter at room temperature (poss. for later reclaims) but that's also an opportunity to implement post-vaporization re-heating, either to shrink the microscopic vapour droplets even further (to ease passage through the lungs/bloodstream barrier), to "Heat-Activate" cannabinoïds more deeply, or more likely a combination of both.

Here's what a minimalist LAVACapsule measuring only 1¼" (dia.) could be like: 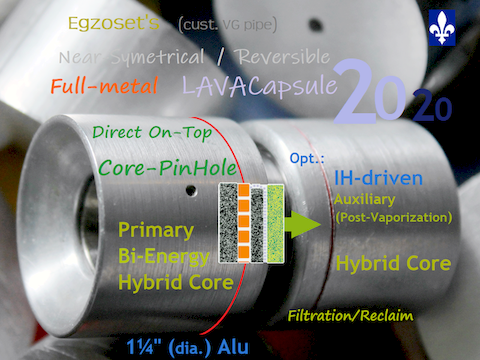 Briefly put this is absolutely safe for finger skin unless abuse was intended, contrary to thermostatic contraptions the overall mass of metal just sucks excess heat before it can risk to cause a burn, which means even blind or visually-impared people would be able to use it without having to fear. Susceptor mass would range around 0.75 g per unit while the whole asssembly reaches a hundred grams: 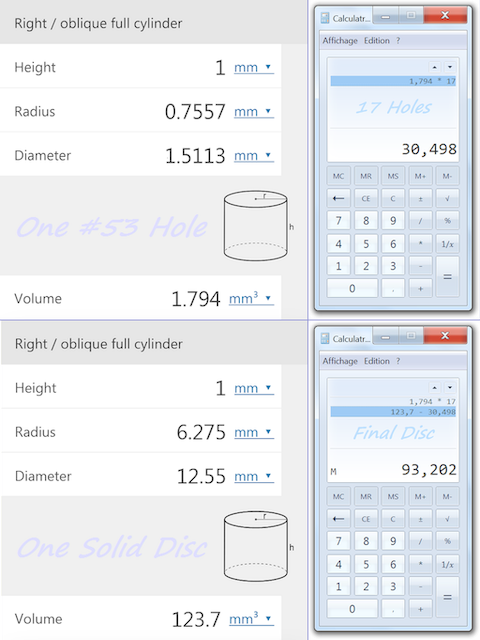 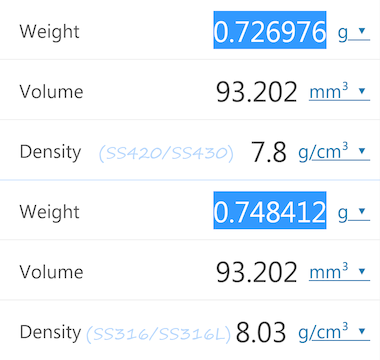 ​
Each Monobloc is only slightly magnetic, the Bowl Ring and susceptor(s) would form most of the magnetic circuit while aluminium Flame Catcher blocs are not. Overall the susceptor-to-capsule mass ratio falls around 1~2 % and still a mere 25 % if compared to the total magnetic load instead, which i figure to be appropriate for a "Spot-Heating" strategy intended to direct energy into my Hybrid Core, keeping intense heat away from finger skin.

An approximate evaluation predicts a temporary-storage capacity near about 1 hundred Joules, maybe half maybe twice but not diverging by an error as far as fivefold IMO: 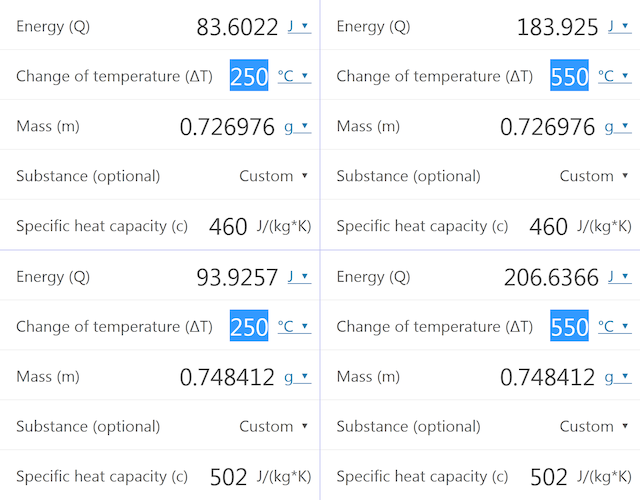 In any case power injection using a ~300 Watts IH driver should only require a few seconds to perform the "Pre-Heat" cycle (#1), separately from the final one (#2):

This implies only a minimal (unwanted) "baking" effect results from a pulse's "Attack" and "Decay" periods.

So far "Plan-B" alone is worth the effort already and that's little more than an approximation of Pulse Heating, i figure IH driving shall be its digital equivalent promissing increased precision "Micro-Bursting" still supporting the presence of Inlet Water, because the main materials selected by Dan Steinberg (nearly twenty years ago...) would be most compatible either with extra-hot exhaust gases from clean-burning butane (H2O + CO2) and/or just distilled water vapor, even simultaneously to be exact...

Anyway it's been a long post and there's too much left to explain when INDEPENDENT DUPLICATION & PEER REVIEW would simplify my sharing task immensely.