What kind of Reflector Hood do ya'll fancy?

Has anyone tried the maverick big foot those baby's are big and plus there easy to clean? I just got two of the 6inchs and they throw a shit load of light.
M

CannaVenture said:
Wow, I did not know the adjusta wings where that big.. They look huge...Is that a 4x4 tent?
Click to expand...

5x5 They are big bro. Covers the tent nicely.

mrbong73 said:
Hey GG,
I decided to give the adjust a wing a try. Would love to get some feedback or tricks you've learned.
Check it out...
Click to expand...

kewl, my friend.
I've been discussing lighting on another thread and wanted to hop over and check out the scene in this room for awhile. FYI I'm a professional cameraman- shot sports for a decade and worked in all of the the Hollywood studios for the next couple of decades so I know my shit. nuff said.

This is not how the experts do it, (and most prolly wouldn't break it down for you this way. lol) This is for someone who'd like get a rough profile of their light source an/or make comparisons between two lights if they're running more than one reflector brand and they don't have a light meter.
I've gotta bunch more tips... lets just see how this plays out here. This one just happens to be what I was thinking about today.

Here's a couple of down and dirty techniques that can help w/ making usable, albeit, rough reflector/hood comparisons if you don't have a light meter.

#1 This one is for measuring spread. Only one light, the light you are measuring should be on in room. You'll need a piece of white cardboard, white paper taped to cardboard will do- foam core if you've got it- the key is it needs to be stiff. The closer to the length of the reflector, (assuming horiz rectangle), the better- 18" -24" width should suffice. If you're jammed a small piece board will do, it will just take you a little more dinking and thinking.

Stand at one end of the reflector, ie w/ a barrel end of the lamp facing you and using the lamp as a compass point, visually bisect the light into quadrants. You need only measure one of the lower quadrants (L or R) because the spread on one side will mirror the spread on the other.

Now, w/ the card in horizontal position, move from the center of the reflector out to it's edge a few times and try to zen out the gradation of the drop off. Establish 3 values, (more if you like) bright, mid-range, and dark. Use a tape measure and record distances. Take 3 horiz measurements @ diff distances from light, and repeat w/ card @ 45 degrees and 90 degrees, (perpendicular.) Try to find the point in the mid-range where the gradation of the drop off is the most extreme. Measure.

Multiply your measurements x2 and you've established spread values for your light. Remember, the values are your relative values for your light comparisons and the data doesn't transfer well when making comparisons w/ op's lights/reflectors, even if it's the same set-up. (In other words, compare notes but don't expect the same numbers- this is subjective. The directions are more difficult than the process. Use them to get a feel for the process and improvise.

#2 This to measure the luminance of the throw or the light intensity and requires a camera. Use a manual setting for ASA and shutter speed and put the iris/aperture/f-stop on auto. zoom into the white card as it goes through the paces I just described, record the f-stop readings. The higher the f-stop, (ie the more closed the aperture) the higher the light intensity. Take the same measurements on the reflector/light fixture that you're testing against to make compare intensity.

A camera can also be used to make color temp comparisons which can be helpful in determining if you've got a lamp that needs replacing. I did a post on this in another thread that I'll try to dig up.
B

Try the Adjusta-wing reflectors. You can get them so close if you use of the 'Super Spreader' you increase the lumens exponentially.
Peace; Big Bud Boy

motherlode kind of intimated that this might be an a-a-w luvfest. If so, I'm cool w/ that. Great reflector, IMHO.


Big Bud Boy said:
Try the Adjusta-wing reflectors. You can get them so close if you use of the 'Super Spreader' you increase the lumens exponentially.
Peace; Big Bud Boy
Click to expand...

Thx. When I was eye balling the pictures of tinker toy and erector set knock-offs on the internet, the adjust-a-wings stood out from the rest. I got lucky because I got what I figured I was getting. Took about 30 years to be able to know what I was getting off of an internet picture, though. Works great! for me and my style but there are a lot of styles and tastes out there so I/m tryin' to stay on technical and skirt either-or type comparisons.

I will tell you why, based on solid, easy to understand principles why most of my spreaders, (600/1K) are in a box collecting dust. Guaranteed to make some of the spreader lovers cover their ears and bite back but who am I to stir up controversy, discuss applied lighting, physical laws, let alone, dick around w/ paradigms?

Could be a hot one when I get up for it. WTF? Might as well have some fun while we're learning something. Hey! Teacha! Leave us kids alone.

I am a blockbuster guy!! Or open hoods rock too! Just gotta make sure you have enough btu's to keep that room cool!!

I like the adjust a wings dual 600 lights all day. My brother really likes them chiller reflectors i think thats what their called. Something with water and lights makes me nervous. Their hella expensive to if you would build a grow room around that i bet to.

Mr_GreenGenes said:
Just switched from yrs of using Radiant AC's to the Magnum XXXL 8's. I always liked the design and construction of the Radiants but after getting these setup and seein the light patter and how well bult they are Im sold. Gotta get 4 more hoods soon and will def be goin with the XXXL's. I looked at the Raptors but they don't look nearly as well made...no captive hardware and hinged glass makes the Raptor look almost impossible to change bulbs/clean glass with one person. Awesome thread here with lots of god info fellas. MGG
Click to expand...

dont know where youre lookin homie! rocking 8 HINGED raptors myself.... had a couple magnum xxls before and these things crush em all day. my mags i'd have to tape the glass cause they would never fully seal.... it sucked.

Yeah they have hinges, but the ones I looked at have the stupid strip you gotta remove to move the glass... and the screws that fall out onto the floor when you unscrew em....are they not designed like that anymore? Def not noticing any leaks in the XXXL's...theyre sealin a lot better than the Radiants did. MGG 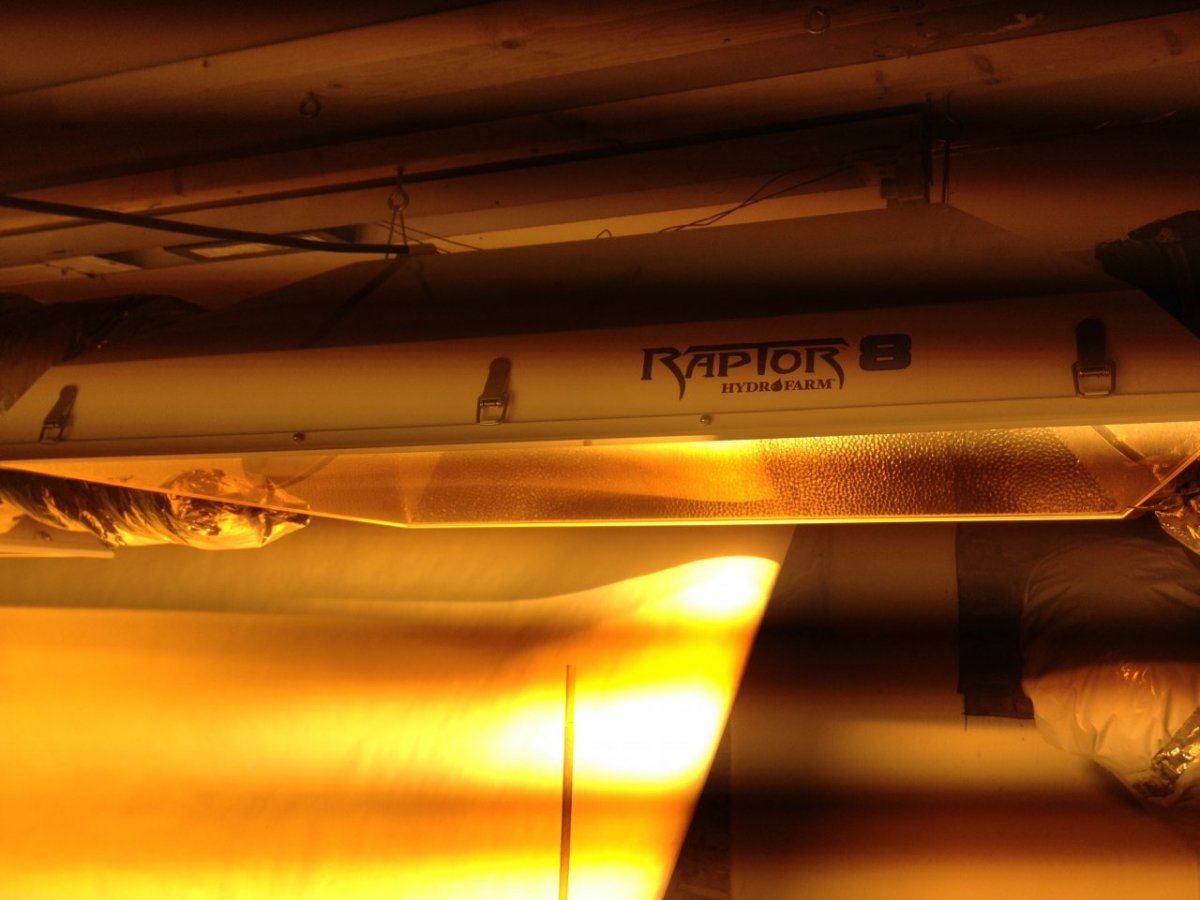 AHHH right on man, those def are NOT the same desing Raptors I looked at. Bet they do seal good. Thanks for enlightening me bro. MGG

Mr_GreenGenes said:
Just switched from yrs of using Radiant AC's to the Magnum XXXL 8's. I always liked the design and construction of the Radiants but after getting these setup and seein the light patter and how well bult they are Im sold. Gotta get 4 more hoods soon and will def be goin with the XXXL's. I looked at the Raptors but they don't look nearly as well made...no captive hardware and hinged glass makes the Raptor look almost impossible to change bulbs/clean glass with one person. Awesome thread here with lots of god info fellas. MGG
Click to expand...

Whats up GreenGenes.. You still rocking that Cherry gear? I was in the exact same situation man.. I used Radiants for years, switched to The XXXL's 8's and loved them....

While its a little offf topic, LED's have been out for a while now, Im starting to hear alot of promising results depending on the brand, Anyone here recently make the switch from HID's to LED's? Not just supplementing with LED's but running them 100%... Id really like to here good and bad from those folks....

Good to see this thread is still kicking....It really is a wealth of important info..

I'm just waitin on Plasmas prices to get within my reach...suxxx bein poor. :) MGG
R

green punk said:
If heat is not a huge issue, the Adjusta wings are really hard to beat. They are spendy, but the increase in yield is a reality.
Click to expand...

you sir know what you are talking about.Run 15K all on awings. Use the medium enforcers for the 600s and the large for the 1k. Awesome heat distribution and light spread. Once I started on these I never looked back. Expensice but worth it.
R

CannaVenture said:
Wow, I did not know the adjusta wings where that big.. They look huge...Is that a 4x4 tent?
Click to expand...

Raptors got my vote!!!

Hey guys. So I need some new air cooled hoods. Wish I could go barebulb but can't.

I'm between the 8in
Xxl
Raptor
King cobra.

Has anyone done a side by side test. I also know the xxl and the raptor have new models so things have changed from the old models.

Cannaventure I read u got two of them. Which did u like more?