Marietta police are trying to determine how hundreds of pounds of marijuana ended up at bakery warehouse Friday morning.

An unexpected package arrived at the Flowers Baking Company location on Powers Ferry Road, and when employees opened it they found marijuana inside, Officer Michael Gardner said.

Employees called Marietta police who took possession of the marijuana.

"A transport company dropped off what appeared to be a suspicious pallet," Randy Brock, company president told the AJC. "Most of our shipments would come through our company."

There was no freshly baked bread in this package, Brock said from his Villa Rica office.

"When something comes in that we don't know about, we check it out," he said.

Police do not have suspects at this time and are still investigating the incident, Gardner said.

Investigators said when employees opened the package, they found the marijuana and called police.

Police estimated the marijuana to be in the hundreds of pounds.

Channel 2 Action News reporter Jeff Dore spoke with Marietta Police Officer Michael Gardner, who said the bakery was received an unexpected package, which they employees thought contained parts to repair a loading dock. But instead, the package included marijuana mixed in with repair parts, bringing the total weight of the package to 600 lbs.

Investigators said the package was delivered from a private carrier service from a private distribution center that is not associated with Flowers Bakery.

No one was taken into custody, police said. 
The two men busted in what officials described as one of Central Texas’ biggest marijuana busts in decades appeared in federal court today and were each ordered held without bail pending a hearing next week.

Hoang Dang Huv, 35, and Ky Dac Ho, 27, both were arrested Wednesday, when authorities say they raided five homes in Travis County and one in Williamson County and seized 1,400 high-grade marijuana plants and about 200 pounds of loose marijuana. All six homes were in suburban neighborhoods and featured elaborate indoor marijuana growing operations, authorities said. Some of the pot seized is shown in the photo at right.

Authorities said the marijuana seized is worth up to $7 million.

Both men are charged with possession with intent to manufacture and distribute marijuana.

Huv was busted when a search warrant was executed at a home at 13912 Conner Downs in Pflugerville, where 285 marijuana plants were growing inside, according to an arrest affidavit. Huv lived at that house and was inside when authorities showed up, the affidavit said.

Ho was arrested during a raid on the house where he lived in Manor, at 5513 Colinton Avenue, an affidavit said. Authorities found 295 marijuana plants inside.

Federal prosecutors asked that the men be held in jail pending trial and U.S. Magistrate Judge Andy Austin ordered them jailed until a preliminary and detention hearing Tuesday.

More than six million dollars worth of marijuana plants were seized in Travis and Williamson counties.

They seized More than 14-hundred plants and 200 pounds of highly potent marijuana.

John Foster, Criminal Investigations Supervisor of the Williamson County Sheriff Office, said that this was a very successful investigation.

"This is a very sophisticated growing network,” Foster said. “We are very happy that we were able to discover this, and we feel like we made a very positive impact in the narcotics traffic in Williamson and throughout Central Texas."

By Jeremy Maready
THE LEDGER

DAVENPORT | Sheriff's detectives said they have found nearly 1,200 pounds of marijuana hidden in compartments under dried roofing tar in a Davenport tar pot.

The tar pot, a six-wheeled trailer that holds roofing tar, was seized earlier this month during a multijurisdictional investigation that led to the arrests of more than two dozen people who are accused of being part of a marijuana trafficking ring that had ties to California and Mexico.

Polk and Seminole sheriff's detectives, who were tipped off by a drug detecting dog, have said the tar pot was used to transport large quantities of marijuana.

Authorities said two Davenport men, Casiano Hoyo and Jordi Hoyo, were two of the sources of supply for the Mexican marijuana operation.

During the initial investigation, authorities seized about 600 pounds of high-grade marijuana, $240,000 in cash, a half-kilogram of cocaine and 17 firearms.

Authorities believe the operation distributed between $500,000 and $750,000 worth of marijuana per week.

Then Wednesday, they found the hidden marijuana, valued at nearly $1 million in retail value, which was of low-quality and came from Mexico, said Seminole County spokeswoman Kim Cannaday.

The marijuana was removed from the tar pot, packaged and taken back to Seminole County, along with the tar pot.

It wasn't immediately clear if the tar pot and marijuana belonged to Casiano Hoyo, Jordi Hoyo or someone else, she said.

But once that is determined, additional charges will follow.

"We know we need to look into it further," Cannaday said. "It is still under investigation."

This is the tar pot wagon in which 1,200 pounds of marijuana was found stashed in secret compartments by investigators for the Polk and Seminole county sheriff's offices. 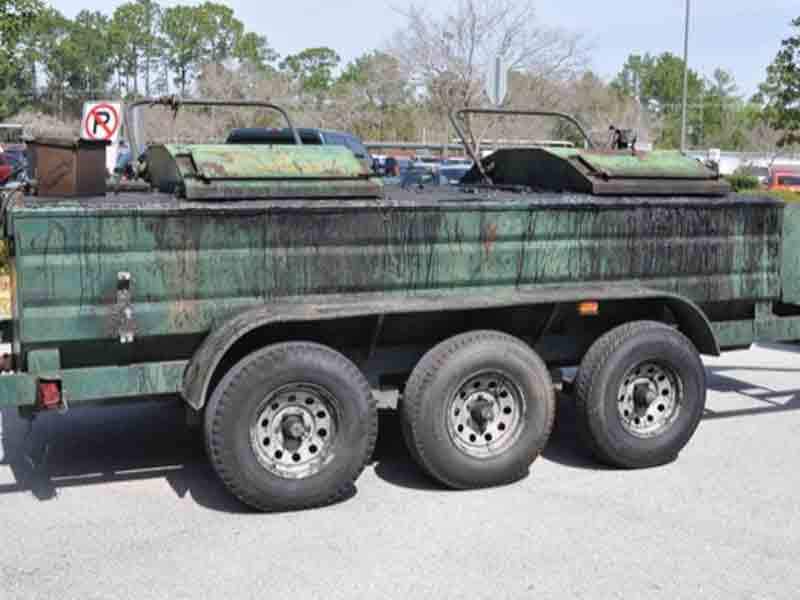