A Morning Read With Coffee: - First Grow, a Couple Pics & I Need a Little Help

Well, this is my first grow. With all the success you veterans have had, I'm not sure if you remember your first grow or not

. Let me start by saying, "Huge props to all you THC farmers that have provided us with medicine throughout the years, it's not as easy as it seems." I'm endlessly feeding them -it's like having children.

Small backstory: I got injured 8 years ago and it's been helpful to have something to relieve the pain lately. Unfortunately, it's a lot of pain and at my consumption rate, it's like paying for an additional mortgage. So I did my studying, got my gear and tried everything I could for experience sake. And man, did I **ck up... But maybe I also learned some stuff.

If your curious and can offer me some constructive advice, I would sincerely appreciate it. List is below:

A. 3.5 Gallon DIY holed plastic trash can bucket with a 35% Coco-coir + Perlite / FF Ocean Blend
| Annual Strain / Seed: Lamb's Breath (Bread) Sativa | Topped | Then Force Topped Late
The original product was amazing and the plant itself was the strongest, fastest, stinkiest growing plant I had. I just grew it from some seed that came out of a dispensary flower that I liked. My grow was not even close to theirs. I know I had limited space, but I marveled at how it did originally (great) and then how it did later when it was flowering (not so great). I obviously did something wrong as I only got 8.5 grams of dried cured product from that 3.5 Gallon bucket and like I said, it wasn't even close to the original products quality. The massive stretch during flowering might have had something to with it. Also, I did super crop one 2x split branch a little late to stop the stretch. It created a bigger split down the center when it healed, and was traveling down the main stock, so that was sacrificed to save the plant. So a few obvious noticeable errors, but I'll have to diagnose further to see where I really messed this one up. It has a dank / skunk smell to it with slight pine. The original I pulled the seed from looked significantly different, tasted different and smoked different. (I have 1 clone from it now, just topped, so I can try again.)

This is similar to the look of the original strain / buds 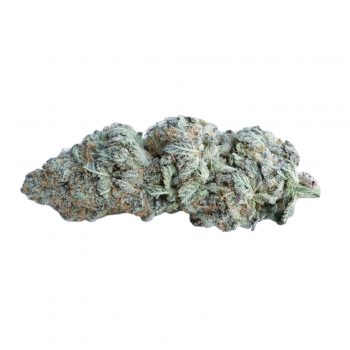 Lamb's Breath after Super-cropping (a Fail) 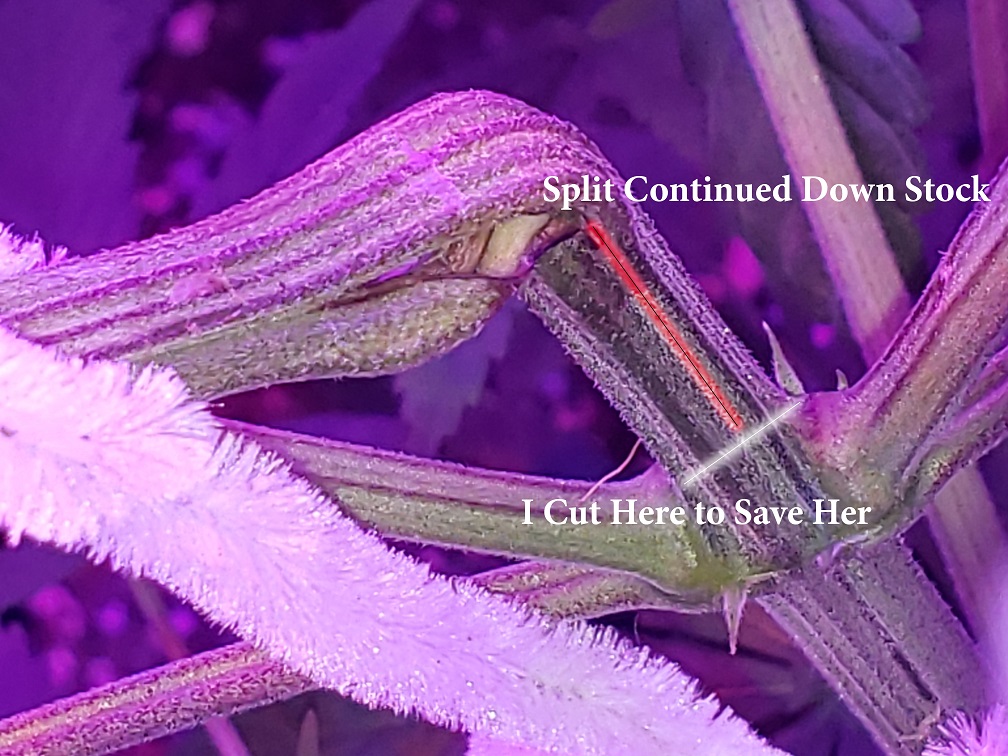 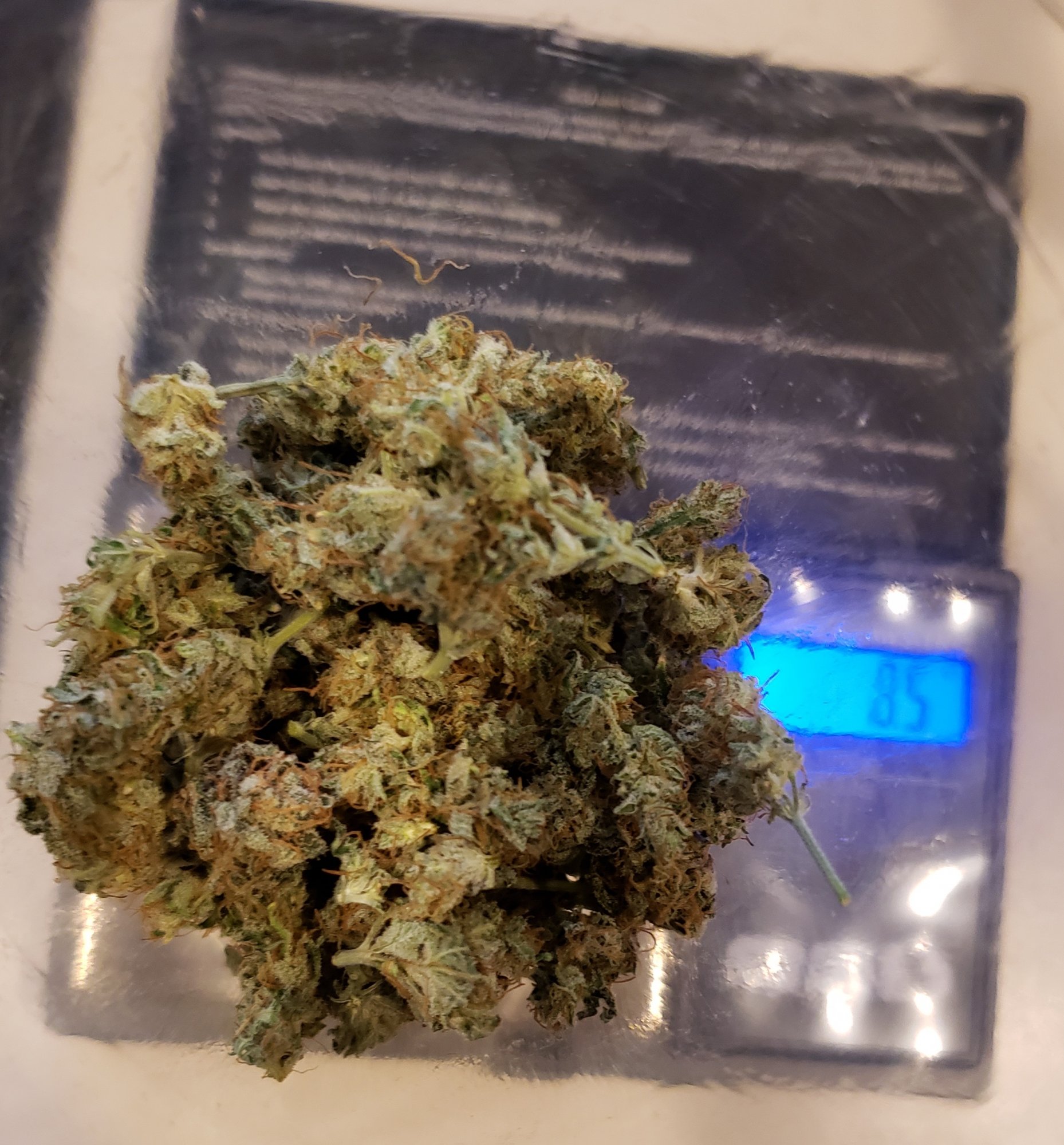 Size Comparison & Look of Home Grow (Not even close to original) 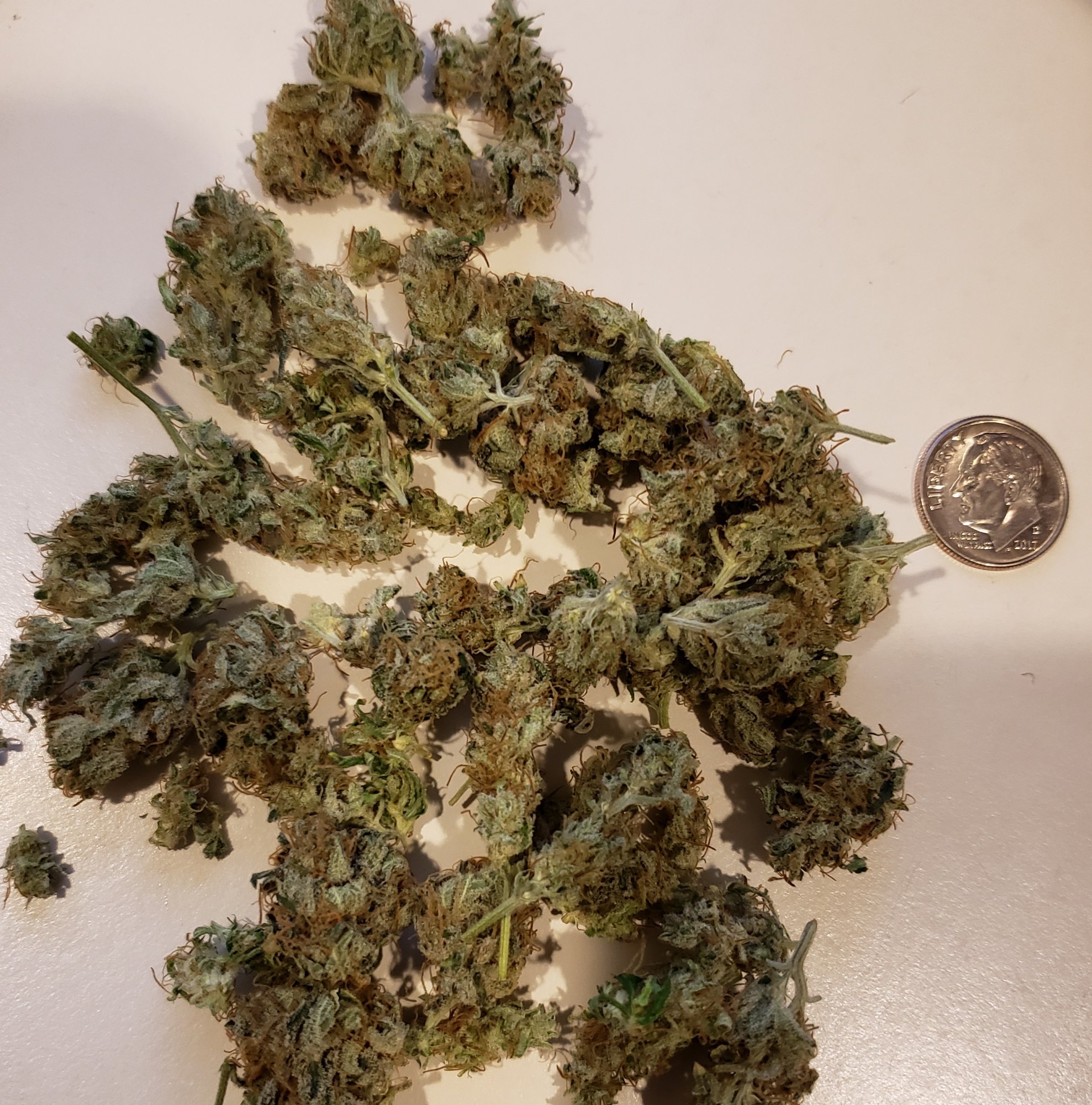 B. 5 Gallon Soil DIY Bucket with a 35% Coco-coir + Perlite / FF Ocean Blend | Annual Strain / Seed: MAC Hybrid | FIM'd
Still growing, I just harvested the top nugs. Yeah... notice I said nugs. *Sad Face* I'm guessing when I fully harvest it'll be like a 1/2 oz dried yield in total (My Fav Though - EVER). I feel like the yield should have been bigger in a 5 Gallon bucket, but humidity is down of late, drainage wasn't great as the soil was semi packed in and I was also lacking some holes in the bucket higher up. I thought maybe a small hydrogen peroxide mix might help her in these last stages, but I don't want to add more water until it dries a bit more. I can still fill wetness about 2-3 inches down and it's a tall bucket & a semi small plant, so I'm compensating. It was also fairly crowded in the tent. What I did get from the top is nice though, almost a duplicate from the cola it came from.. Smells like chemicals & cheese. Most people consider it an Indica, but this particular strain just wakes me up and makes me super creative. Anyway, bad grow and yield result on my end, but good product. (I Lived and learned on this one.)

MAC About a Week Before Harvesting Top Nugs: (All will be popcorn nugs though) 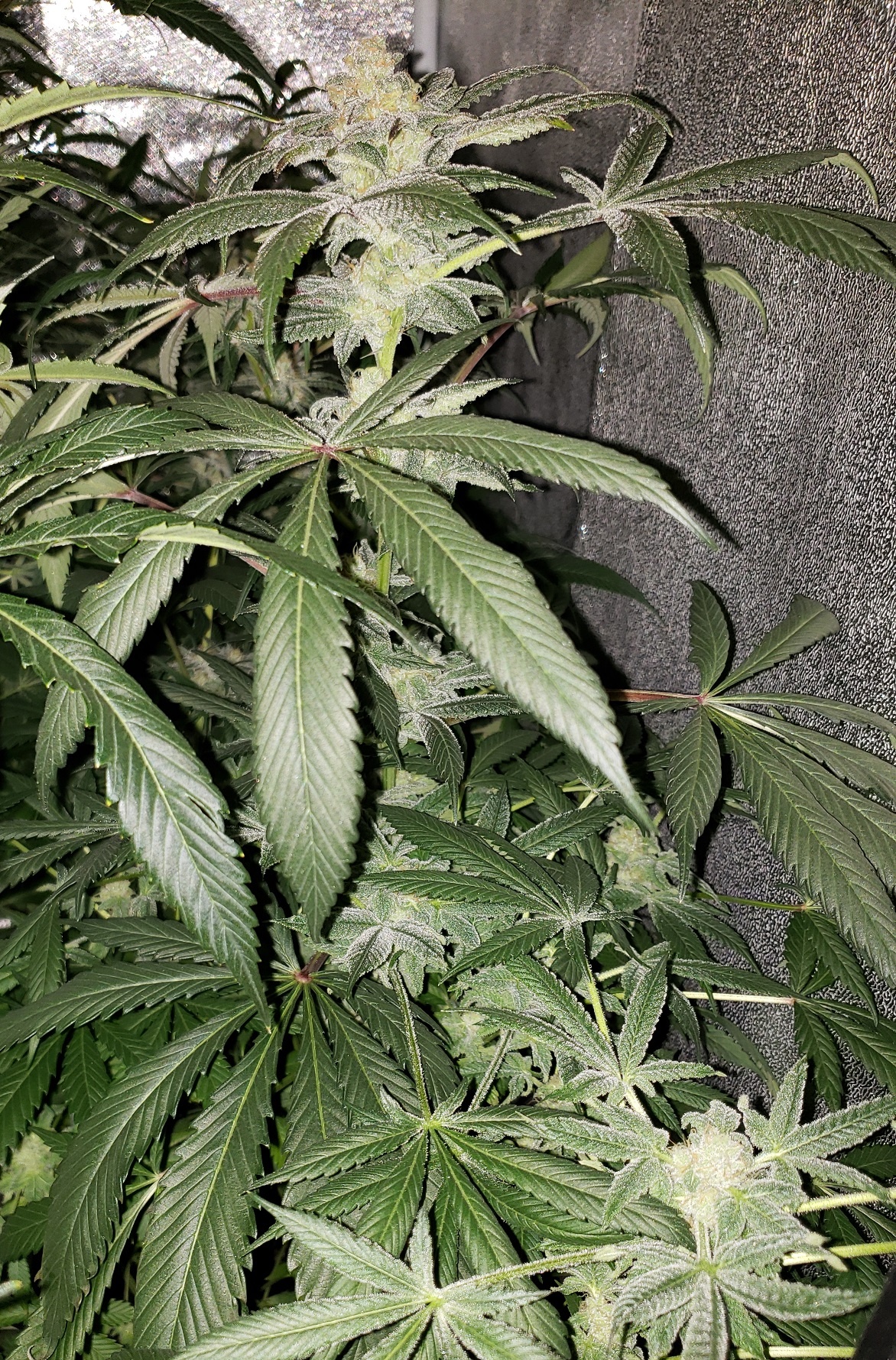 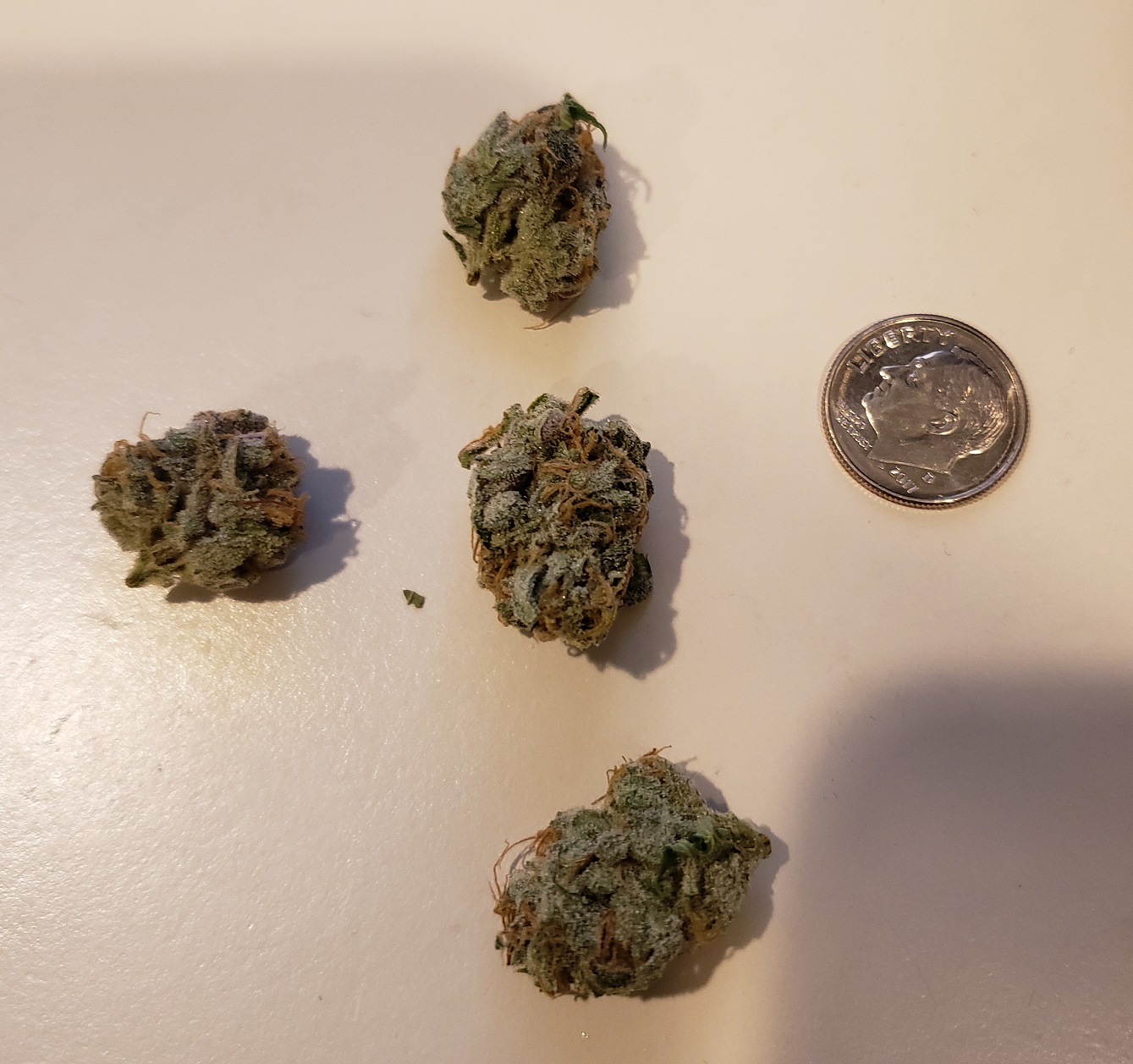 C. 4 Gallon DIY | Air pump, with air stones, placed in center of holed bowl at the bottom, 2 Inches Clay Pebble-> 2 Inches Perlite -> Remaining Fill is Coco-coir | Annual Strain Seed: Red Headed Stranger Sativa Hybrid | FIM'd + Super-cropped + Stem Pinching + Additional FIM'ing + Force Super-cropped
This is still growing, and the plant is freak'n monstrous in comparison to any of the soil grows. I also beat the shit out of it, as it was the first one I started. I thought you needed to train them as a baby, so I pinned her to the ground. The only thing that did, was give her a funky stock shape and shred the stem as she grew along the roughage of the soil. Then being coiled at this point, I threw her in a little half gallon hempy bucket made from a plastic coffee bin, but only after roughly massaging her roots to free it from all the soil. Bad move... Took her a bit, but she perked up and grew strong later. I then decided to upgrade the hempy bucket to the one mentioned above and add an air pump. Took her a bit to recover from that transplant as well, as I thought she was gonna die due to the lack of root support. She kept falling over. But after she recovered and her roots hit the bottom of the new DIY hempy bucket, she exploded and dominated half the tent. Biggest plant I have right now. For some reason I cannot get the run-off to get higher than 5.2 ph. I try to balance it, and maybe it helps for a while, but whenever I drain / flush, or get the 30% run-off, it's always 4.8-5.2 ph. I assume this is happening because of all the oxygen being pumped into the root chamber. But get this, when I make composed tea and I oxygenate the water, my ph increases from 6.0 to 7.5-8.2, not decreases. Either way, I would think a ph this low would hurt the plant a great deal, but it's insane how good she's doing. Can plants adjust to grow in a different ph setting like fish, and as long as you don't shock them, they're fine? Or is she lacking stuff and doesn't give a shit because of all the oxygenation in the root zone? Like, she's just beasting through it? I suppose she gets some nutrients from the correct PH feed that's being poured in through the coco-coir though. This one is a bit of a mystery to me, but I can't argue with my best worker and a 3 inch stock. It's like, "Okay girl, you're tearing it up and outperforming everyone, so.... I guess, let me know if you need anything... I'll be over here."

Red Headed Stranger - 2 Weeks Ago at Lights Out (Leaf twist in the back -I've concluded it's either PH fluctuation or Heat/Light stress. Maybe both.) 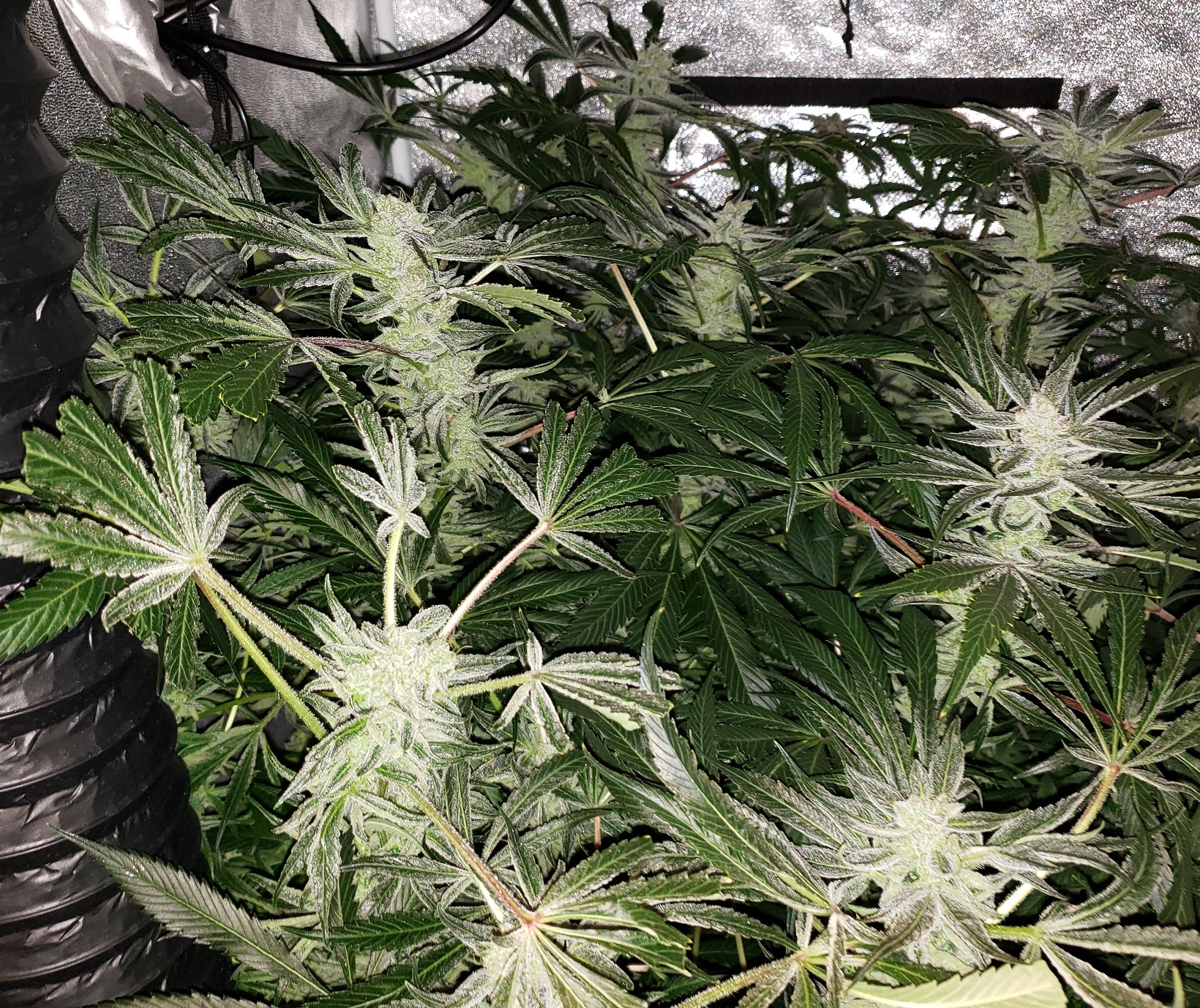 One of her cola's about 2 weeks ago at Lights Out 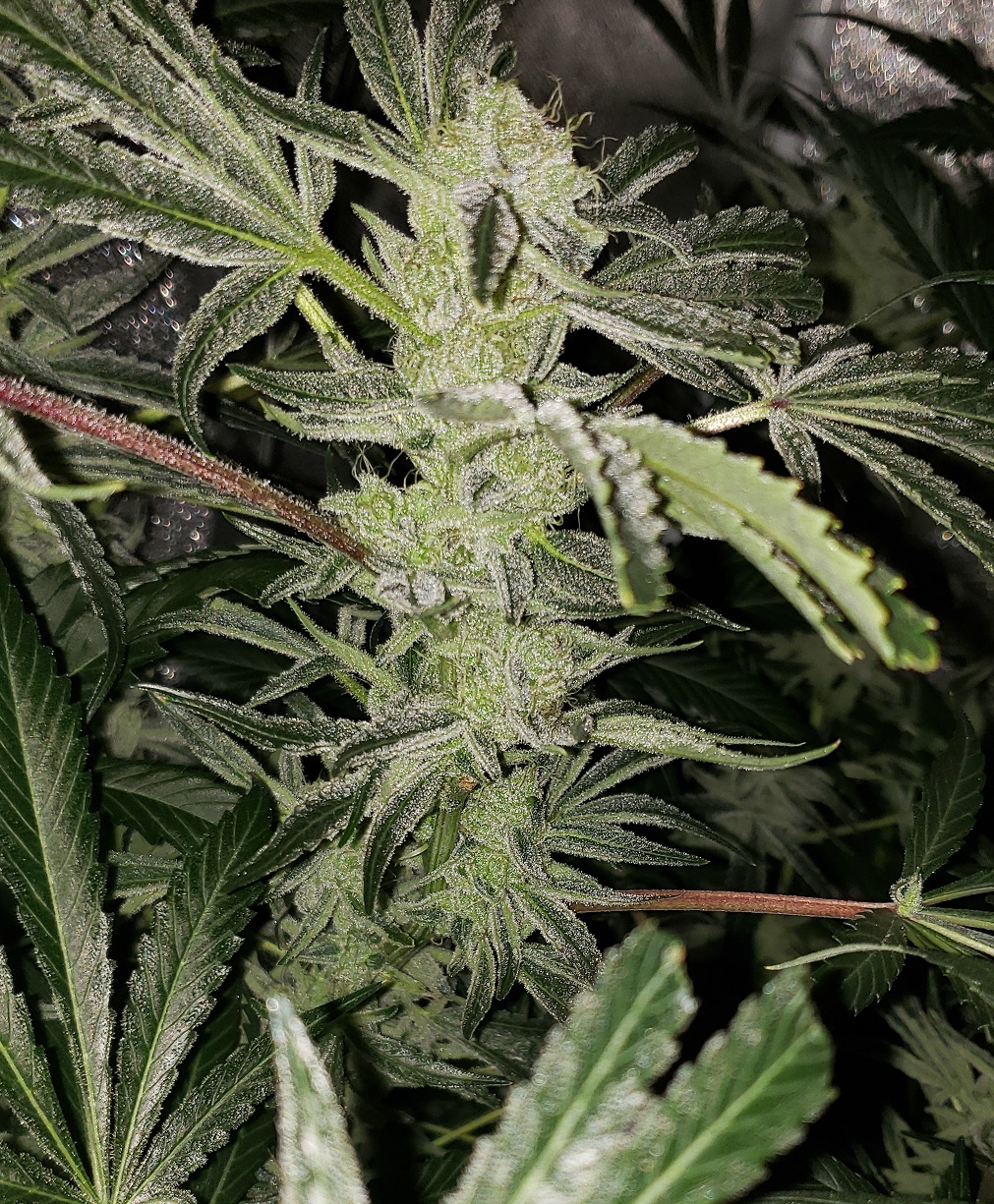 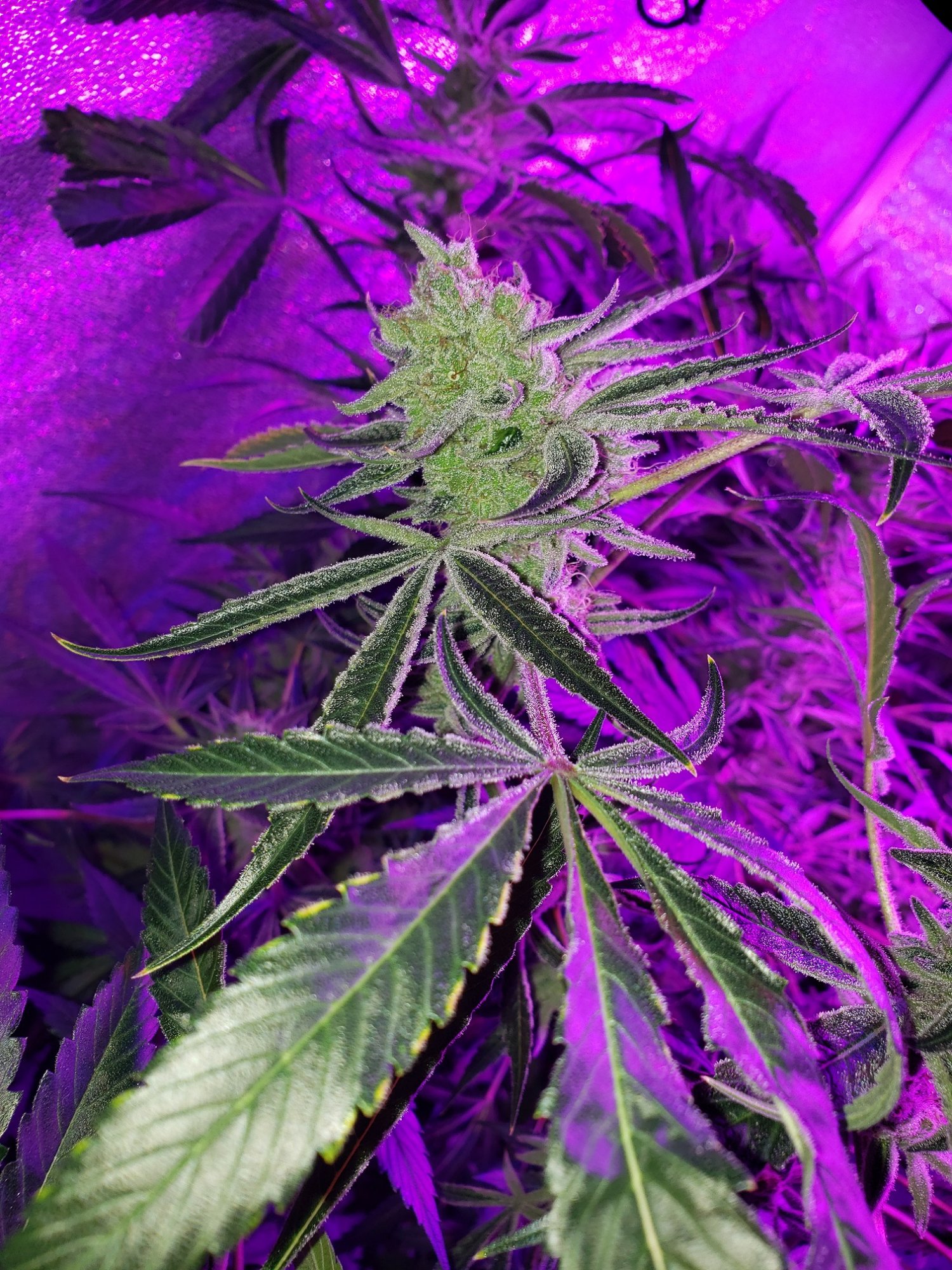 D. 3 Gallon Round Fabric grow with 35% Coco-coir + Perlite / FF Ocean Blend | Auto Strain Seed: OG Kush Indica Hybrid | No Training
This one looked amazing, just how a plant should look IMO - but something was wrong... I didn't do any training to this one, as I wanted to see one grow naturally and I heard that you shouldn't beat up autos too much. Plus I already had the others going, so I wasn't too worried. But what went wrong? Why did it look so good, but the timing seemed off? Well, it got impregnated somehow..... I did have one male in the same area, but I caught it fairly fast. Like, 1 to 2 days in pre-flower, not even flipped. And she didn't have a ton of seeds, just enough to let a newbie know what had happened in the end. I realized later when my wife walked by, saw it and said... "It looks pregnant." (Creepy plant whisperer, or my lack of discernment?) I confirmed this plant whispering later, (after drying and curing part of it) when I found a seed smoking. I'd say she had some pre-existing knowledge, but the first time I showed her buds to inform her I smoked weed, she asked, "What is it?" Now, knowing it had seeds, I went back to look at the remainder of the plant as some of the lower bud sites seemed too premature to pull at the time. I noticed a couple of these sites had seeds as well. Maybe 8 in total. If that one male was what caused it, that was really fast. Now I know what you guys mean, and don't get me wrong, a few seeds are fine, but it's crazy how it actually messes up the plant. It doesn't allow it to grow properly for smoke. It seemed swollen and didn't ever seem to cola up. And by the time I pulled it, it had redish / brown hairs. The smoke is interesting. Definitely different as it smells like earth and spice... I don't hate it. (Lived and learned on this one.)

OG Kush - Partial Harvest Day (Or so I thought) 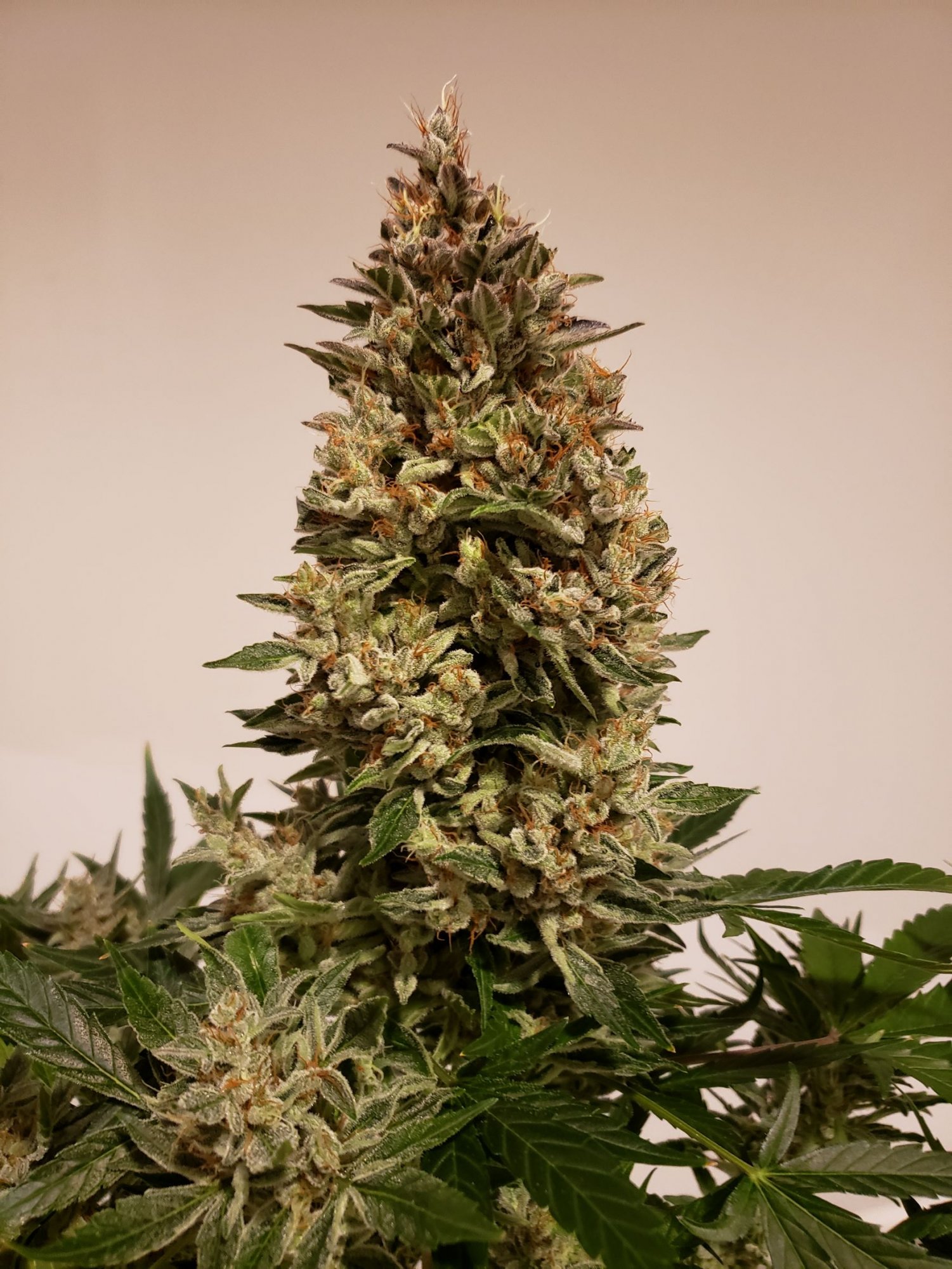 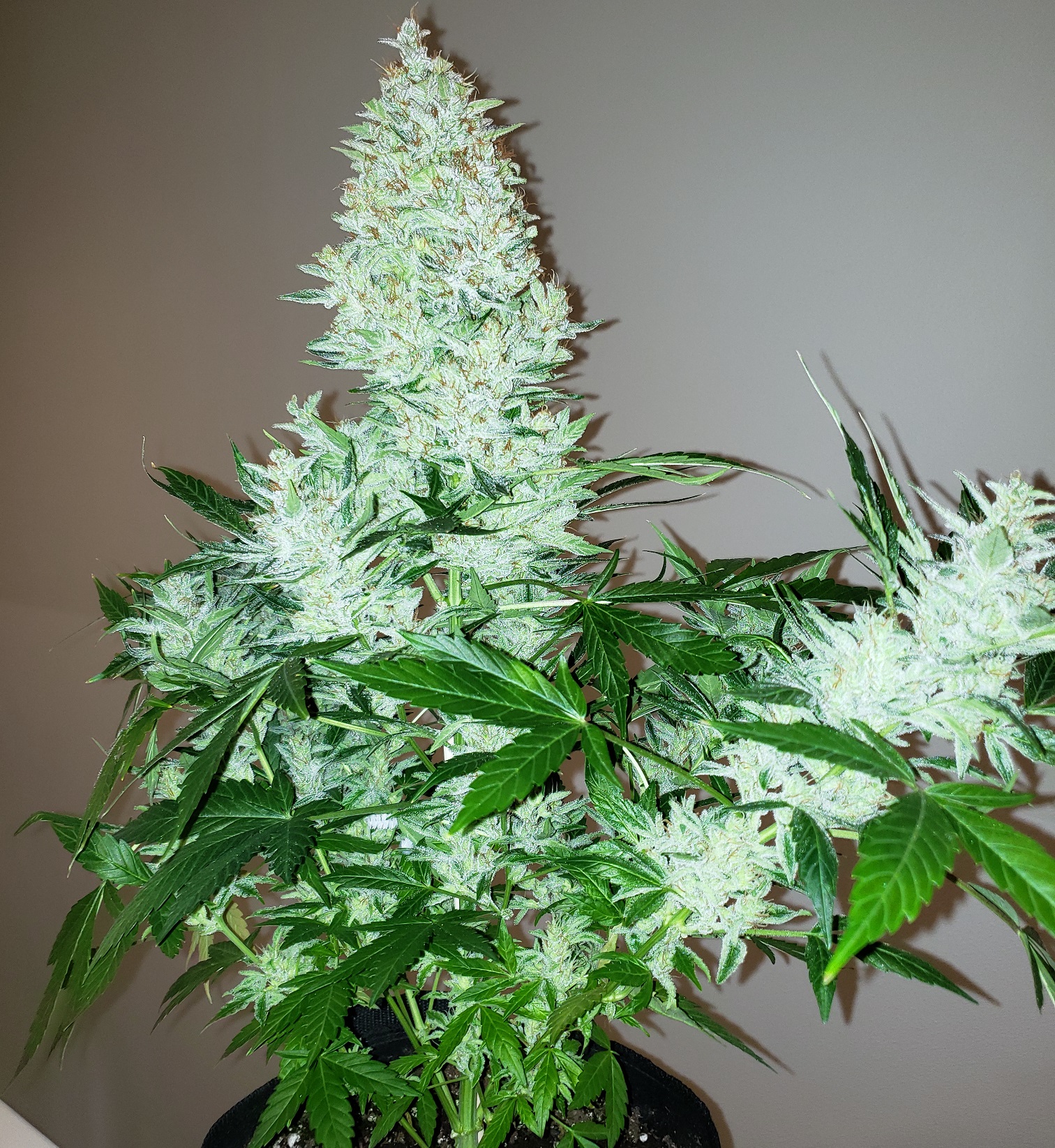 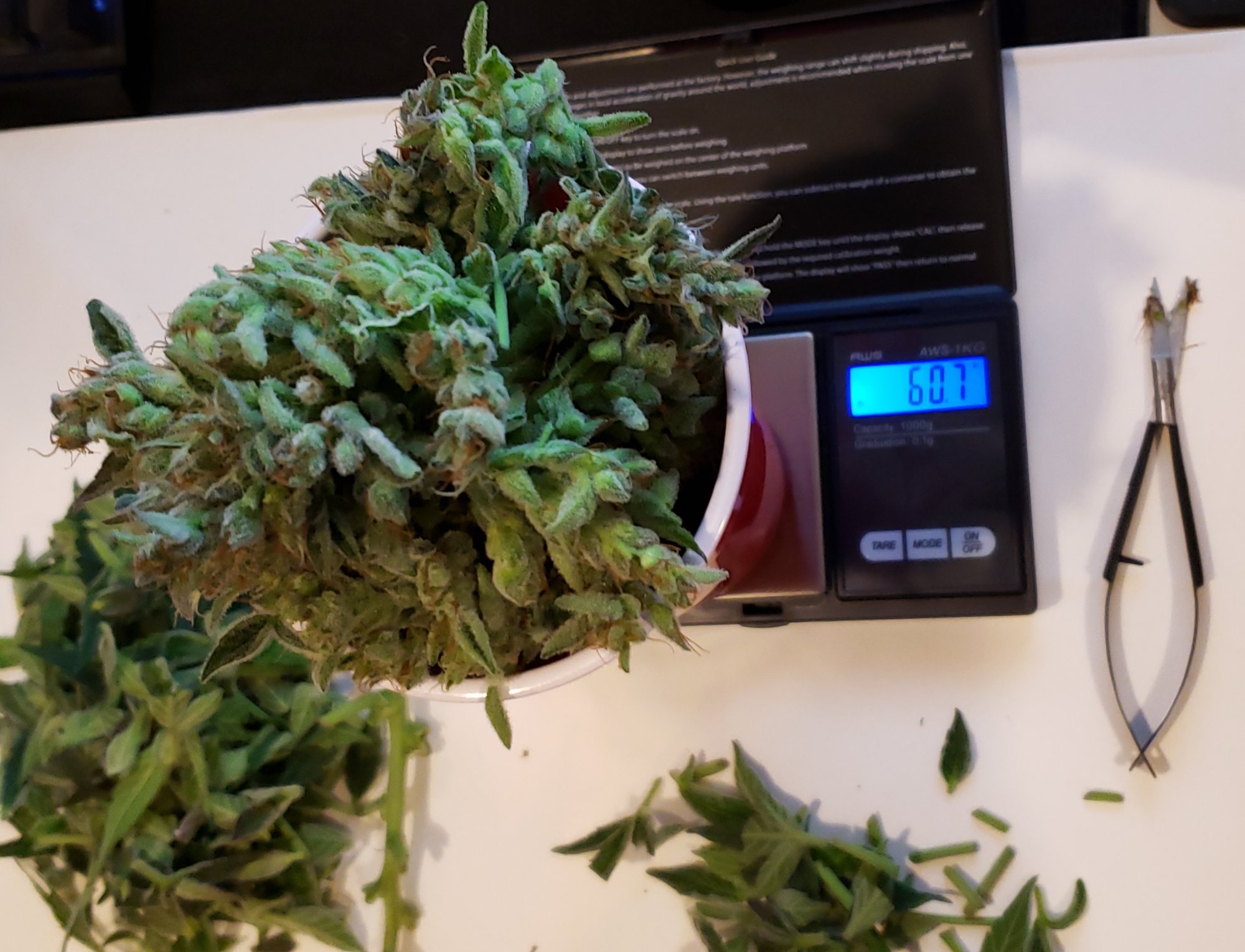 E. 2 x Auto's grown in Gas Station 32oz Plastic Soda Cups - 50% Coco-coir + Perlite / FF Ocean Blend | Auto Strains - Blue Berry & Bubble Gum / Seeds
I started these in solo cups, with the intention of transplanting to a bigger pot, but they grew so tall, so fast, that I ran out of room with the other plants also stretching. So I just thought, well maybe if I put them in a little bigger cup, they'll give a slightly bigger yield and I can at least sample them. So I did, but I don't know if it was my feed or the difference in the soil type or the type of plants they were. But they had super lime green leaves, matured really fast and became the first plants I harvested. I really liked these though. The Bubblegum smelled fantastic and had a nice stickiness after being cured. The Blueberry smelled fruity as it grew but more like a skunk after it cured. Man, and it messed me up. Like MESSED ME UP.... and I'm used to smoking the highest THC dispensary top shelf stuff out there. It was like a radical euphoric / couchlock / munchy / delirious laughter smoke with a 2 second kick in time. So nice... Side thought: I wouldn't mind planting a Blueberry seed in a hempy bucket to see if I can get an auto to explode like the RHS mentioned above, just for curiosity sake. In the end, even though these two auto's were small, they were actually the most satisfying and pain relieving thus far... 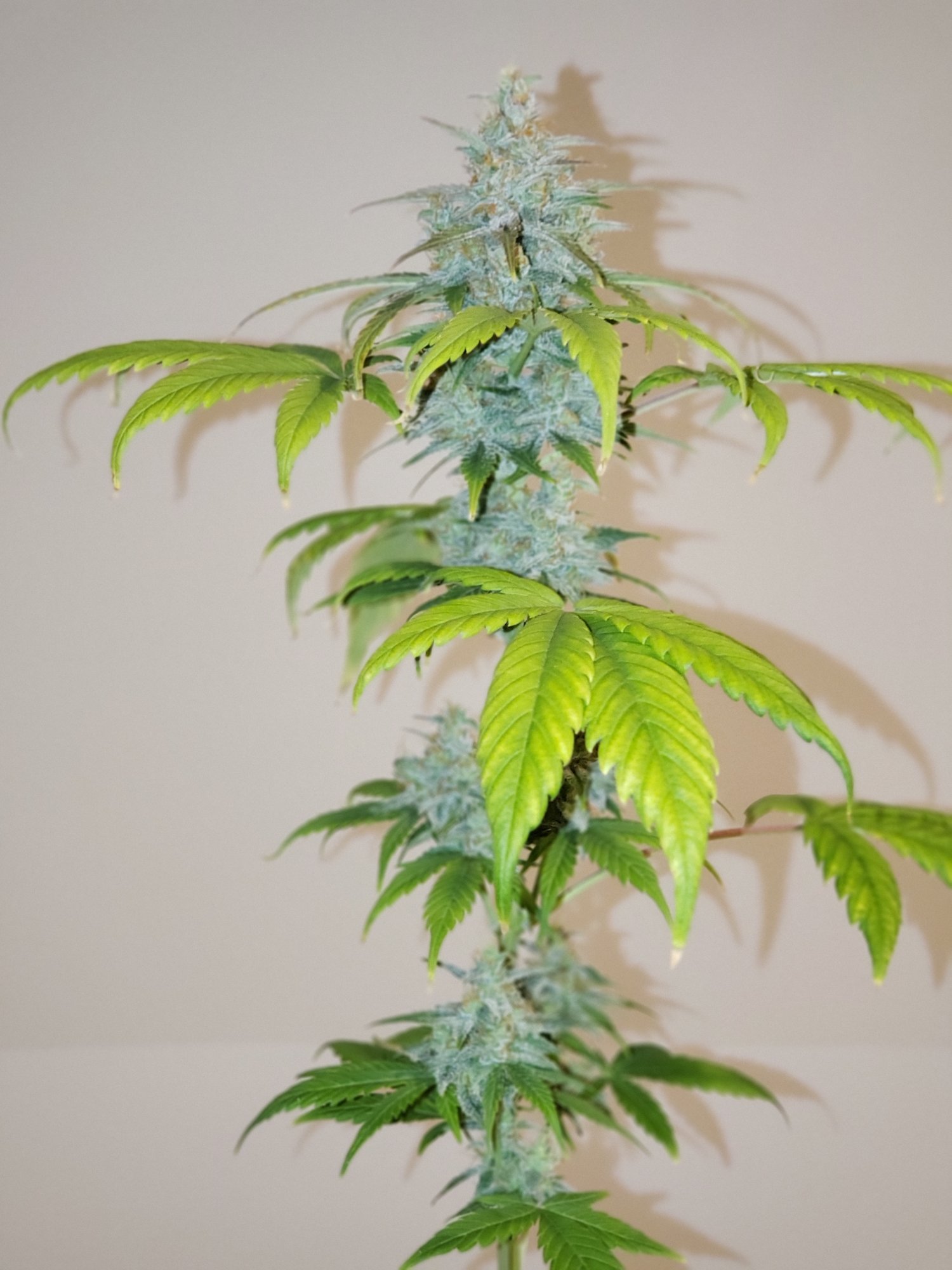 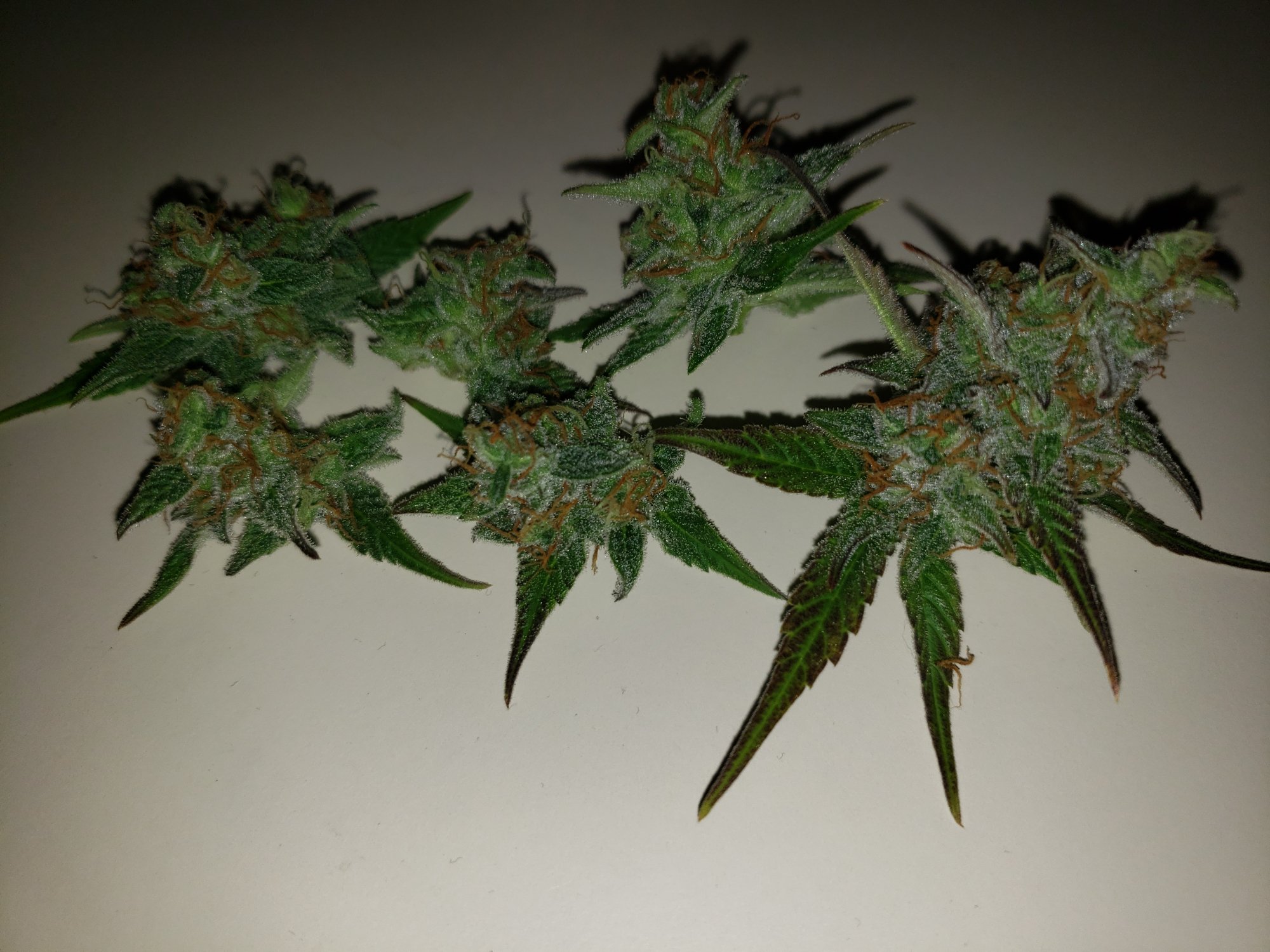 I obviously learned so much more, but those are some of the key things I learned on my first grow. My main question now is, when do I harvest my Red Headed Stranger and should I do anything before I harvest, like the 24-48 hours of dark? Is it wise to be doing this partial harvesting, or should I just cut it all down at once? I can take more photos of it, if that'll help answer some of these questions. A special thank you to all you successful growers out there and hell, even to us unsuccessful growers. Someone's gotta make you look good ;) I hope you had a laugh or two, thanks for reading. 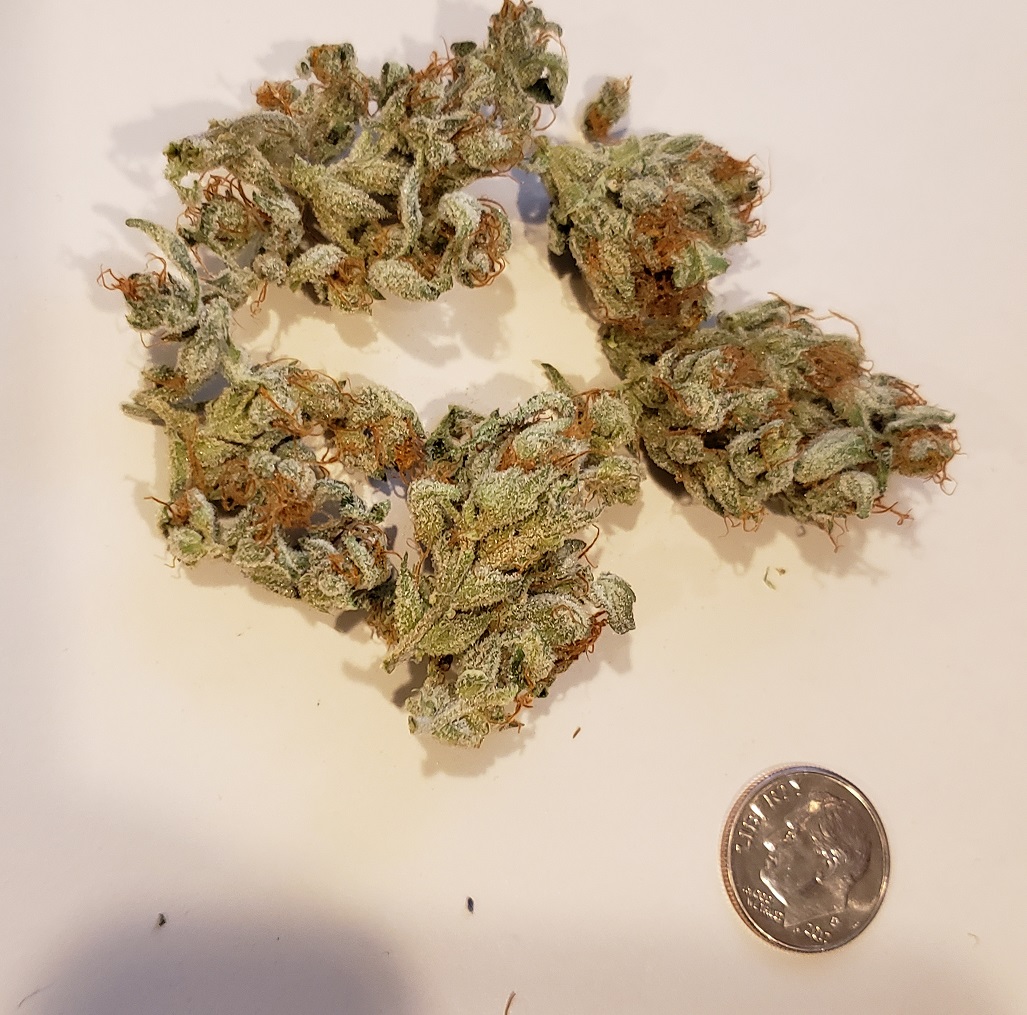 Fun read! Each grow gets better and better, I've found. I'm still a beginner.
You must log in or register to reply here.

Auto WW close to harvest but the rain and humidity! Help

Stretching my girls time out, have questions on the chop.

52 days into flower, wondering on window date for harvest

Trichomes ready for harvest - too clear?