Do I have a virus?

Absolutely cannot figure this out. Plants are super healthy and jamming at multiple undercurrent buildings and rooms at one site. I take healthy clones and get them nice and rooted and bring them to another site with a brand new building and pop them in undercurrent system. They start rooting and then Bam! Leaves start hooking and twisting and getting deficient looking. I’m really chasing my tail here, can’t figure it out.
Water is from a well, and run through iron backfilter, sediment filter, carbon filter, UV filter, RO filter, then another UV filter.
I don’t take clones from anyone, only use my own seeds I breed with. As you can see the plants are pretty messed up. I have a bunch of other undercurrent rooms so I’m familiar with temp, humidity, lighting, ferts, chillers, all those parameters. The parameters in new building are pretty perfect, but so far three crops have done this weird twisty deficient thing. It almost looks like broad mites but it’s not.

It looks like they are suffering from high nutrient levels, which can draw the liquid from the plants roots, causing them to look perpetually droopy. On another possibility, you didn't mention what nutrients if any, you are feeding. RO water will be devoid of minerals, such ascalcium, magnesium,and a smattering of others which are important for the plant. Plants like iron but within reason and I'm not sure what medium you are using to grow, which can affect what nutrients are available or not. They look like they need a lot more light as well, but that isn't causing the problems presently.
A while back another grower had a somewhat similar problem with high CO2 levels causing problems, and it turned out that the newer cement that was used for the floor was offgassing CO2 and hurting the plants from too high of levels. Probably notheing to do with your plants, but I put it out there as a "maybe". I really don't think the plants are suffering from any insects or diseases... I think the problem lies in the nutrients, or lack of them. A list of your growing medium and what you have been feeding them with will help.

Yeah they definitely look like they have lock out from to high of nutrient. I’m running gem at comparable levels as all my other rooms though. Starting around 50-100 ppm and moving up to 200 ppm as they develop.
I thought maybe nutrients were to low so I bumped up to 300 ppm and the plants really didn’t like that.
I’m using cultured solutions nutrients and cal mag at 1/4 ml per gallon.
The medium is water, it’s all RDWC systems.
I agree that it looks like a nutrient issue, but all the parameters are the same as my other systems that do really well so I don’t think that’s it.

This is a shot from my healthy systems 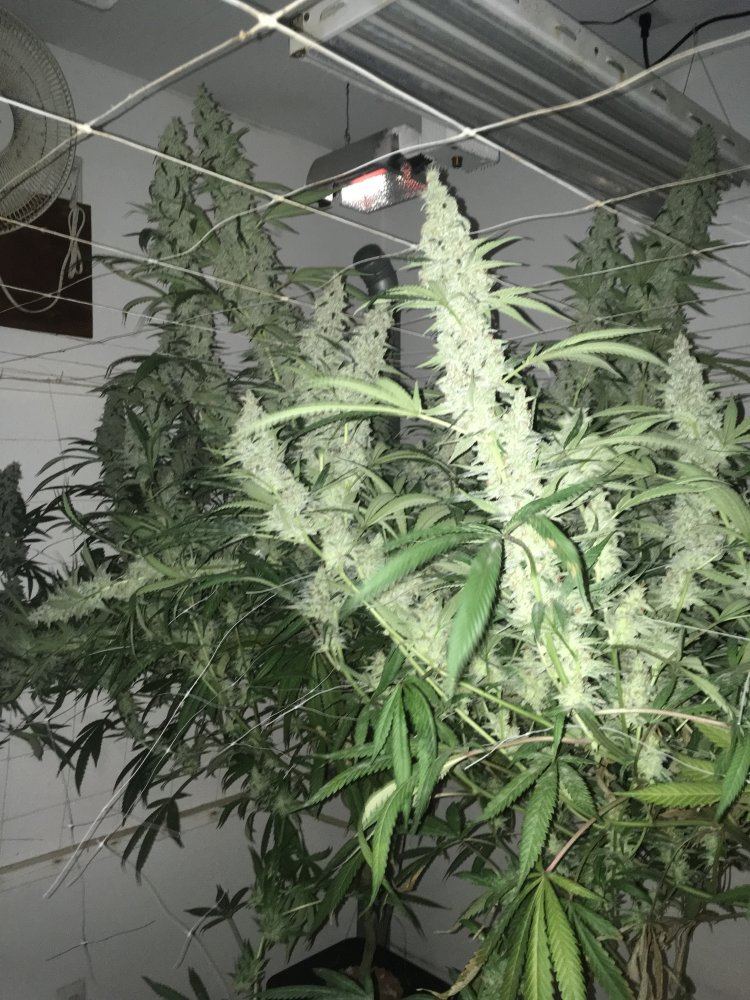 I'm out of my league with RWDC systems, using Promix myself. There are a bunch of RWDC guys on the board, I'm sure that they will have a more plausible explanation. Any new construction, gas heaters, or any other possible sources of fumes? Temps are good?

stupid question,you seem to have difrent buildings you grow in ,like i say stupid but gonna ask anyway,in this praticular building,is the same nutes used as in the same bottle as the other rooms,next stupid question,in this room how and what are you using to clean your buckets as in same scrubber same bucket with building to clean,im getting at what if you have 3 buildings ,they all have there own clean and supplies,how about the hydroton is it cleaned the same way,like jimmy said sounds like the building or contents are ninja screwing ya,just thought i would ask,i just had a similar case in a thrash can grow,shit went all whoopy jawed on me,it is outdoors in the high heat,now with a air pump,but was cleaning and noticed a white smokey color to the water after i was done,used baking soda to clean the can,filled it anyway and never got better,so dumped it,i had dropped the sponge i was using on the ground,so didnt want anything from ground bothering the system,got a new sponge and water was clear,both were new sponges if you dig,water clear and added all my nutes to it,checked on the hour all day,just kept going up and out of control,spiked at 8.5 ph,so dumped it scrubbed again same sponge all good,decided since every one was talking about the problems they were having from there wells i would just go buy 33 gal of ro water,bam there it was ,cant explain the sponge gig but the ro water fixed all the issues i was having,so maybe check your supplies

Yes, temps are excellent. Nutrients are the same. Everything is the same pretty much. I’m thinking it’s gotta be a pathogen of some sort that’s in the new building. Or was in the water I used to clean the buckets before it was treated.
Just wondering if anybody has had a similar issue and if there’s a way to test for virus or pathogen

Owlfarm said:
Yes, temps are excellent. Nutrients are the same. Everything is the same pretty much. I’m thinking it’s gotta be a pathogen of some sort that’s in the new building. Or was in the water I used to clean the buckets before it was treated.
Just wondering if anybody has had a similar issue and if there’s a way to test for virus or pathogen
Click to expand...

if it is legal were you are ,i suggest a tissue test if you can find a company that will do cannbis,that will sure enough solve the problem,when you say pretty much ,thats what i was getting at,there something,so do the buildings all have same insulation in them and such,see were im going now,i think your problem lies right there not what your doing,there have been cases of spray in insulation making folks sick

I’ve been dealing with a lab that tests for plant pathogens, and it’s looking like it’s diatoms. Aquarium guys call it brown or red algae.
So the diatoms are getting into the air diffuser hoses and clogging them. The low oxygen from clogged hoses is causing pythium outbreaks.
That’s the current theory. So does anybody have a good method of getting rid of diatoms?
Most of the info on them is geared towards aquarium owners. I found one thread on here recommending physan 20 and hydrofungicide.
I found another thread on roll it up where a guy didn’t have any luck going the Benny route.
Here’s a pic of the brown stuff that came out of system after I put 25 gallons of bleach in it. It’s the viscosity and stickiness of cold honey. 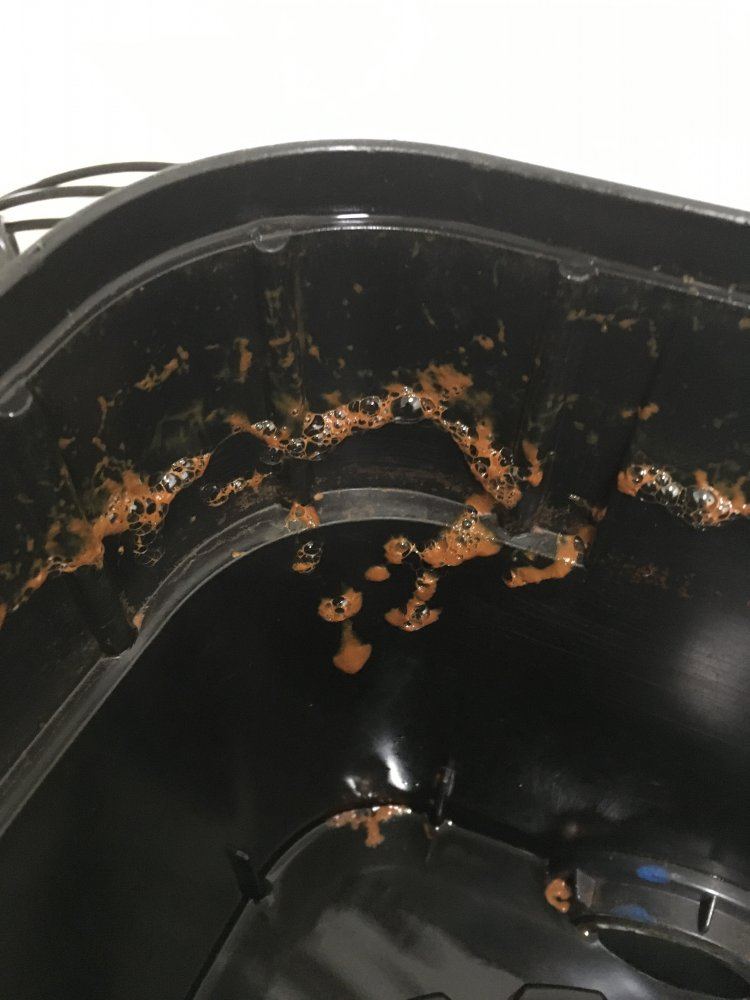 I’ve been reading up more on here about the brown algae and it seems like a lot of the advice is to try hydroguard at 2-4ml a gallon.
I did try going live res with bennies a few months ago without any success, but I was using a lot of different bennies. Maybe just straight hydroguard would help.

Here’s some pics of what the roots do. They stick out without any fine branching and then die back. 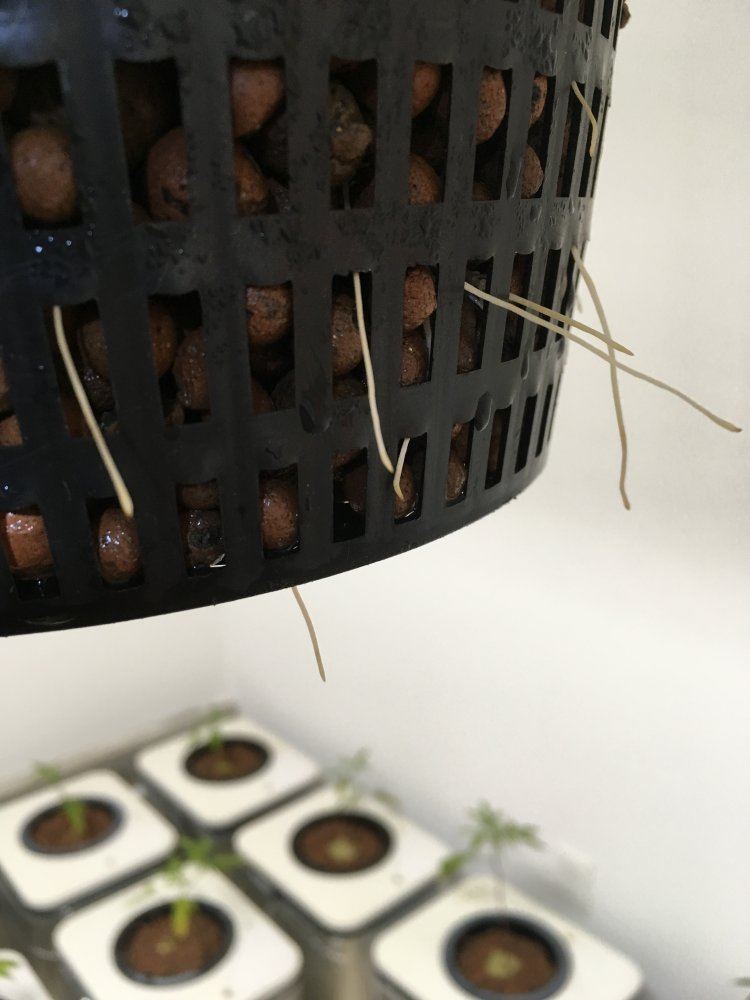 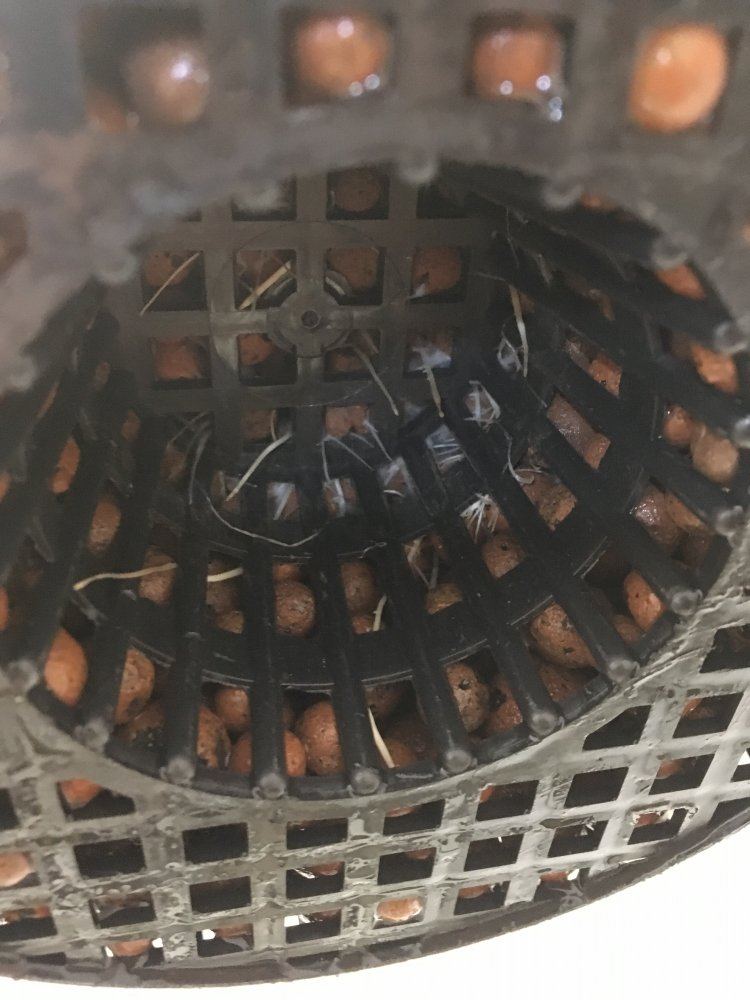 Hey bro diatoms often called new tank syndrome. Silicates and phosphate are usually the culprit but the reason it happens is lack of biological filtration. Hydrogaurd may help but if you grab a bottle of seachem stability and follow the directions it should clear it up within a week. Diatoms are harmless but as you say they are oxygen using and can deplete o2 levels if there is not adequate aeration.

2 options. Run sterile like h2o2 or run live like hydrogaurd. I will be replacing my hydrogaurd with seachem stability next run. Also an enzyme will aid in eliminating thier food source.

If you wanna go live.. now understand I haven't tried this yet but well over 20yrs breeding and propagating fish and aquatic plants I do understand diatoms well here is what I would do... And I know I have not tried it but I'm very confident.

Clean the res and start fresh add seachem stability as per directions. Takes like a week. Add hygrozyme at 1ml per litre. I bet you never see another diatom again.

Now where is your water level?

Also if you are in a cold climate do not order seachem stability online it's like hydrogaurd if it freezes it's toast. You can get it at most aquarium or fish store. Do not substitute there is all different brands... Stick to seachem stability

Thanks for the info. It seems like there’s more info on diatoms with fish guys than grow guys.
I generally prefer a sterile res, typically I run UC Roots( hypoclourous acid) but this hasn’t seemed to help with the diatom issue.
I’m assuming it’s diatoms because the air diffuser hoses become plugged very quickly and a lab found diatoms in the hose. I could certainly be wrong though. I’ve been doing a lot of tail chasing.
Anyhow, if the hypoclourous acid isn’t getting rid of the problem you think I should try seachem?

I’m intrigued by your theory because my building is new, plumbing is new, it’s somewhat similar to a ‘new tank’ in the aquarium world. You think the seachem is worth a shot? Should I add it with plants in system or get rid of plants, clean system with h202, then add fresh water and seachem?

I’m thinking this red rust stuff is dead diatoms on surface? These buckets have been extensively cleaned. 25 gallons of bleach run through system. 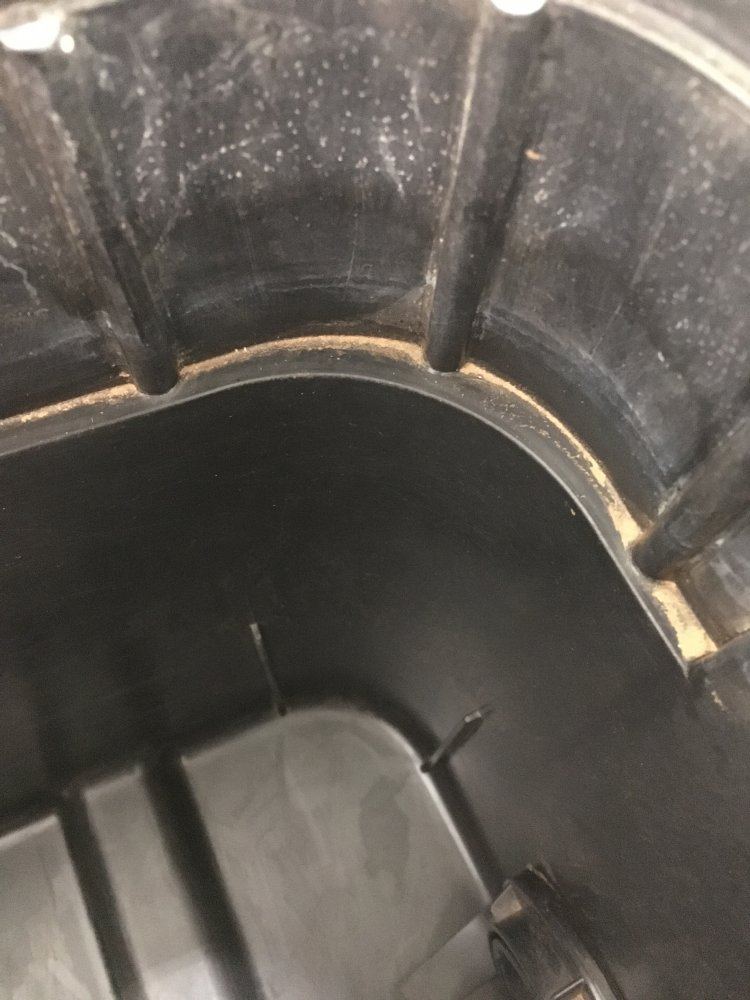 Owlfarm said:
I’m thinking this red rust stuff is dead diatoms on surface? These buckets have been extensively cleaned. 25 gallons of bleach run through system. View attachment 922788
Click to expand...

I run my system like I ran my tanks it's super easy. You have an air stone in the res? Remove it and put in a sponge filter

Then clean the system from everything you can. Add seachem stability as per directions and also add hygrozyme at 1ml per litre.

You know have a great home for the bacteria that will provide some mechanical filtration also. Never wash that sponge in anything but dirty res water. It's you biological filter and you will kill it if you do. Just a gentle swish no squeezing.

Change 50% of the water a week and you should have a problem free system. I don't usually advocate this shot to people but it is how I run my system and it works. The difference is I seed my tank from a friend's tank instead of using seachem stability.

I have a feeling this will catch on in a few years. The key is looking after the biological filter.

The other option is keep if roots and filter your water with an RO unit. There is likely high amounts of available phosphate and silica.
You must log in or register to reply here.
Share:
Reddit Pinterest Tumblr WhatsApp Email Link