Plants are finally getting going, failed seed sprouting, stunted start, and left them too long in the one gallon containers. From their start in September, slowly progressing, but wasn't paying enough attention to them. Posted on their yellow leaves and stunted appearance, back around November 1st., but found out that after investigating they needed up potting, which I then accomplished. I took the opportunity to also enrich the soil with FFOF mixing some mykros (mycorrhizal inoculant) mixed in. Lighting which originally was a four tubre two' long T5, was changed on 10/16 to my four pot cree cob (rapid led 3500k kit).
Here's the chronological events:
sprouted end of August, solo cups 9/3, 10/16 moved into one gallon plastic pots
10/26 moved into 3 gallon fabric pots. Last two photo's taken today... Continue to be amazed at the progress since up potting. 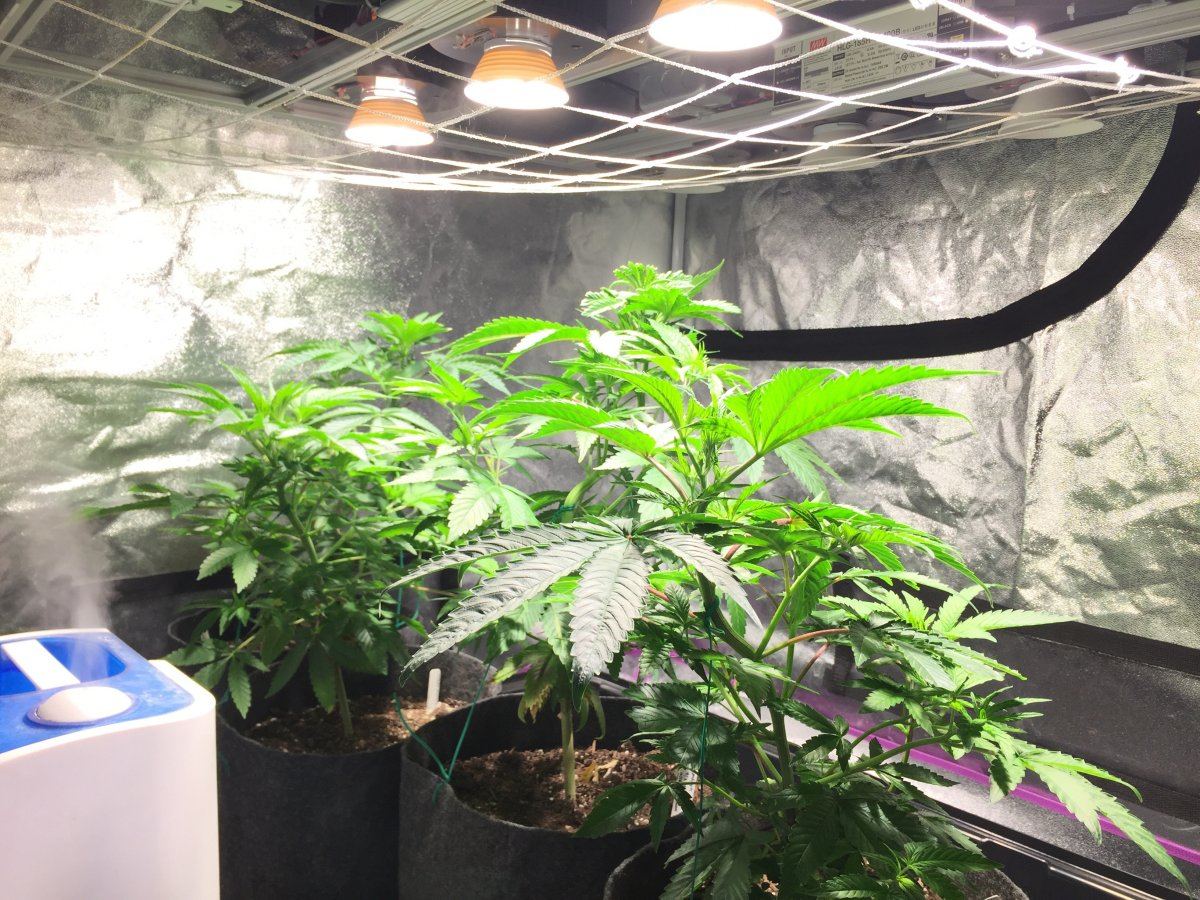 Progress to date nearing the canopy netting. Not quite three weeks since moving into the three gallon bags. 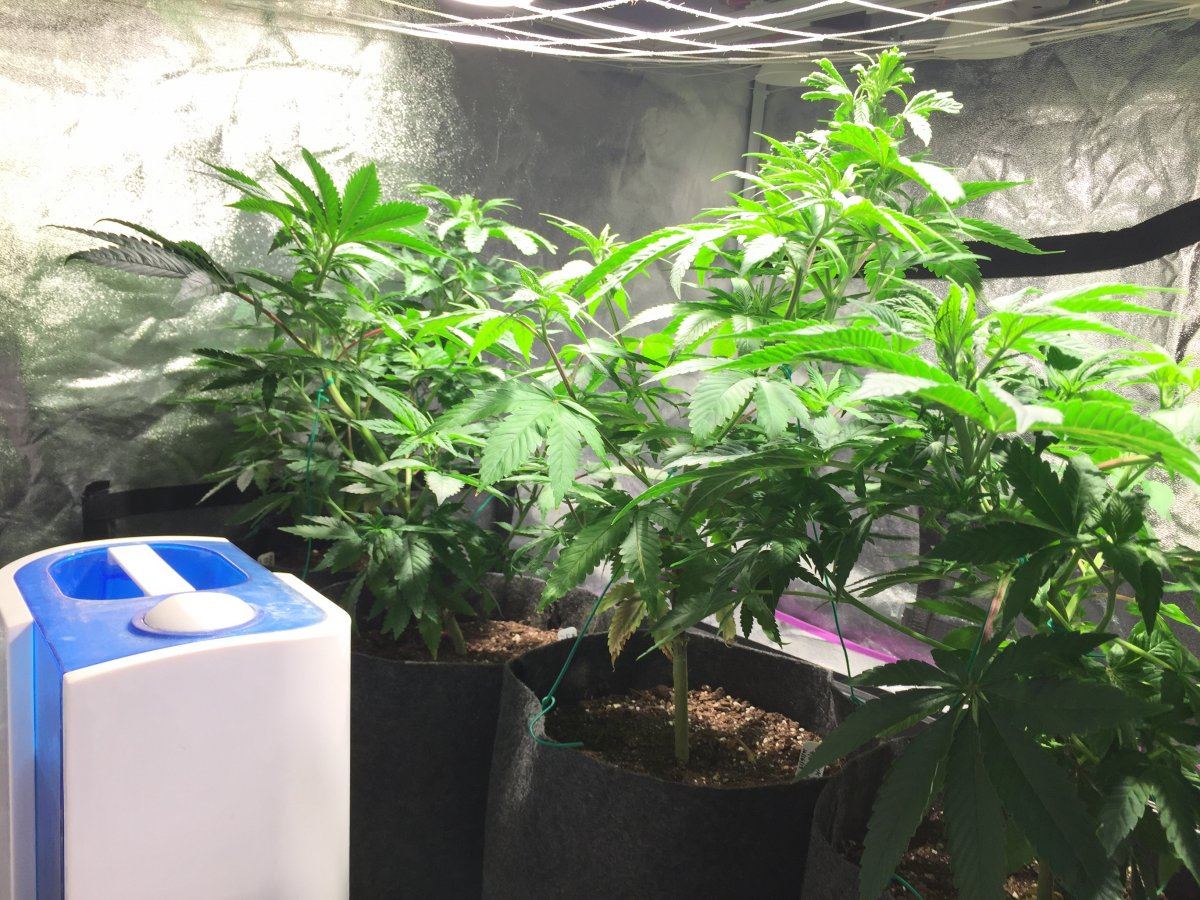 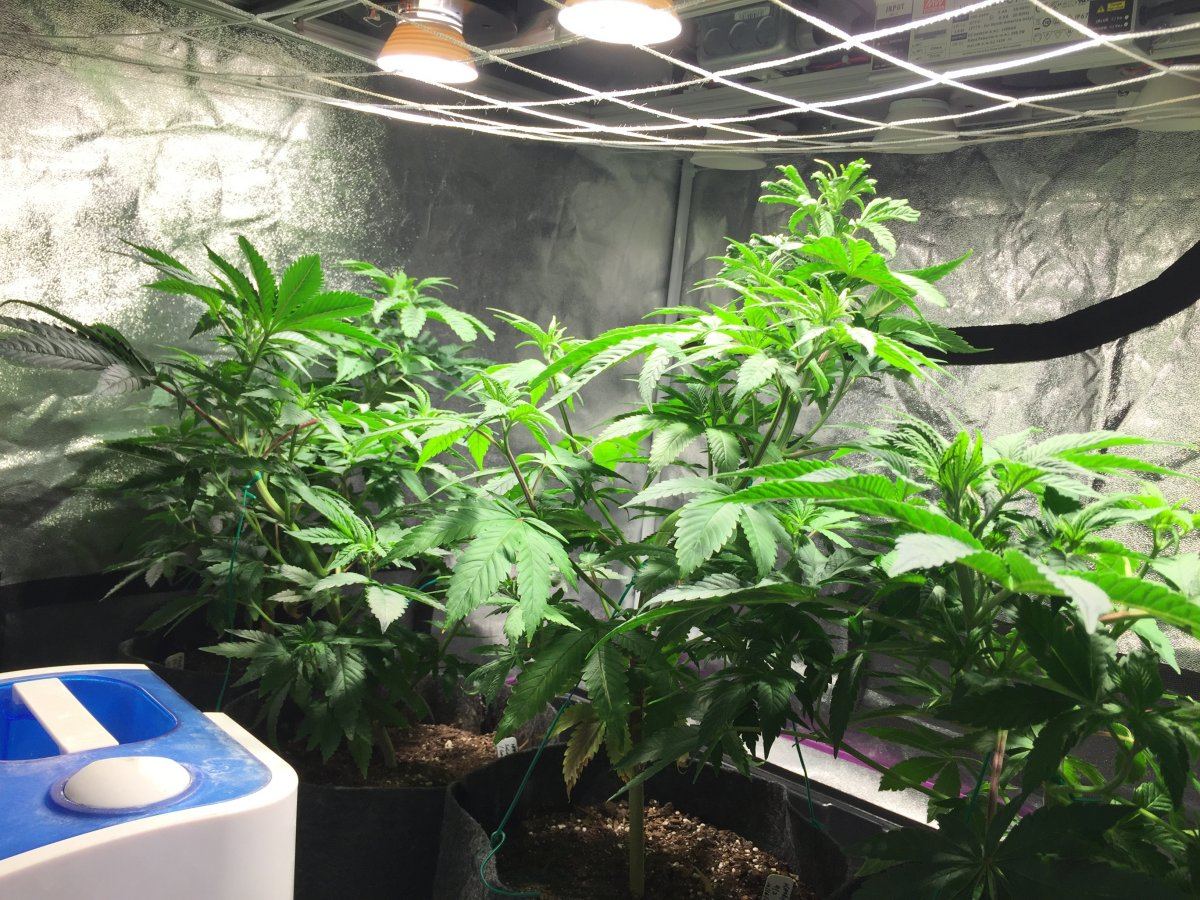 So just about a week since the last post, up-potted to 7 gallon bags from the three gallon bags. Turned the outer two additional banks of cob’s on. (Rapid LED 600 watt, custom framed fixture 12 cob 3500K). 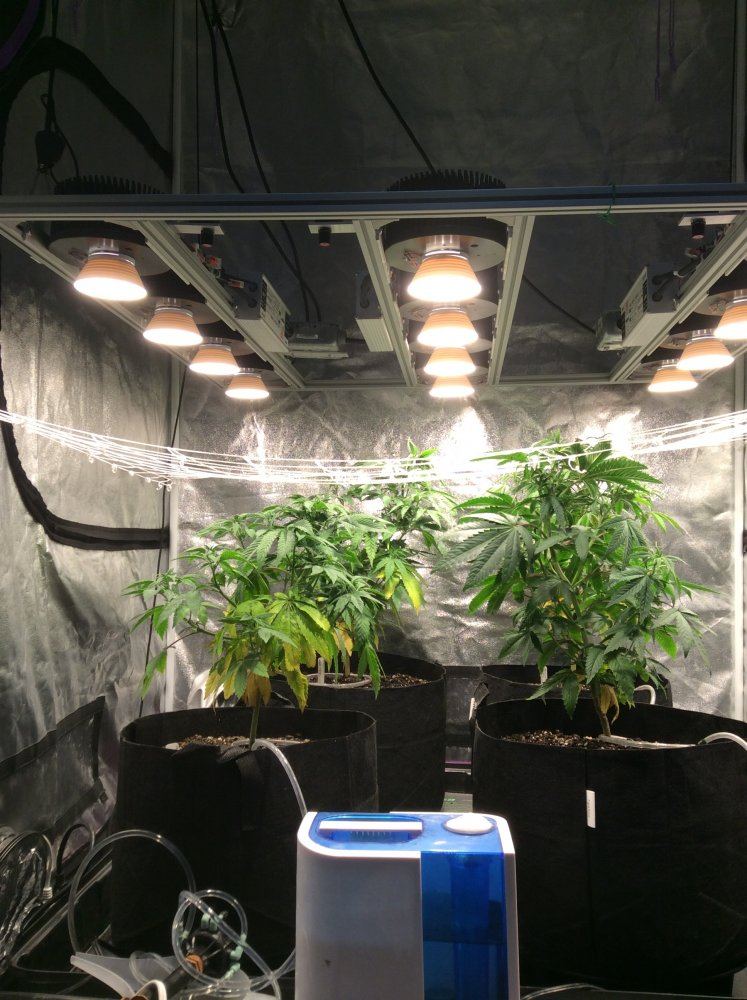 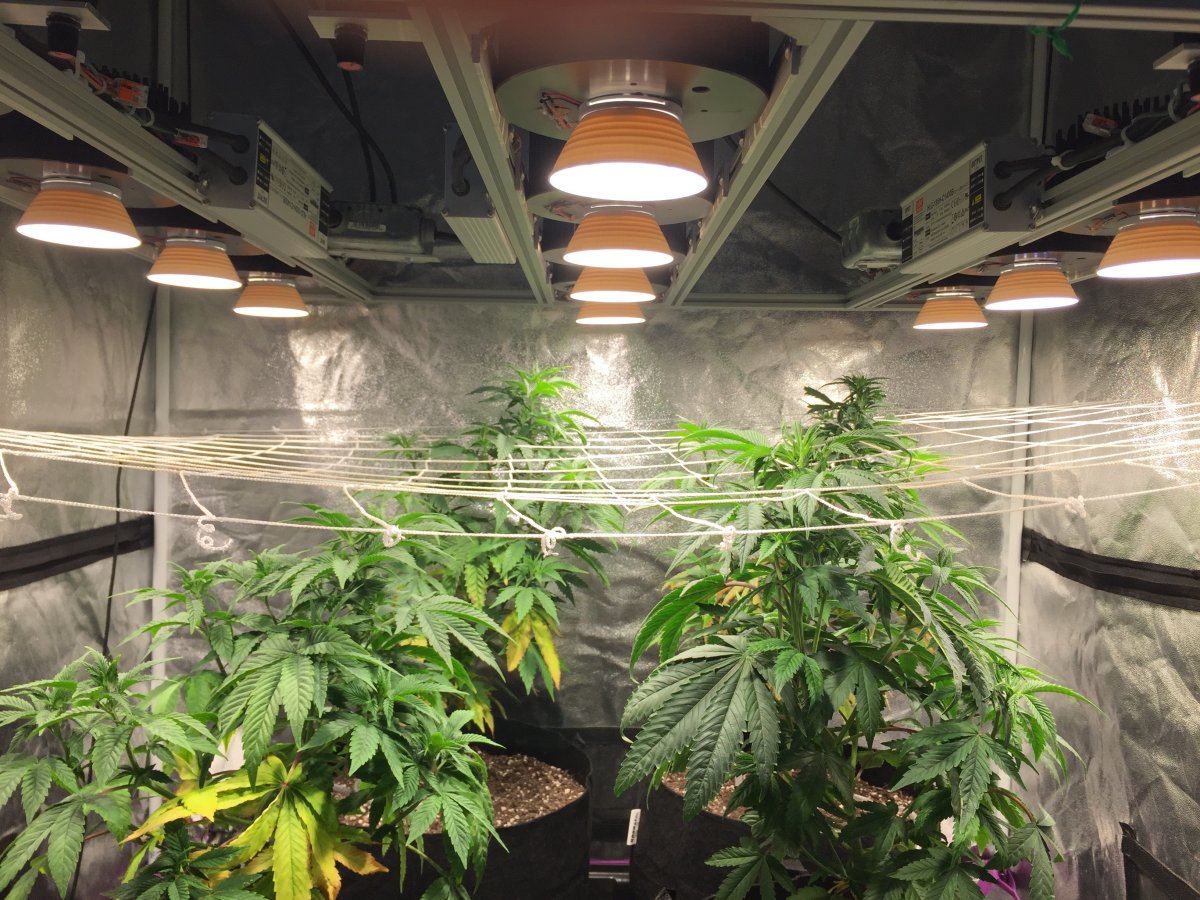 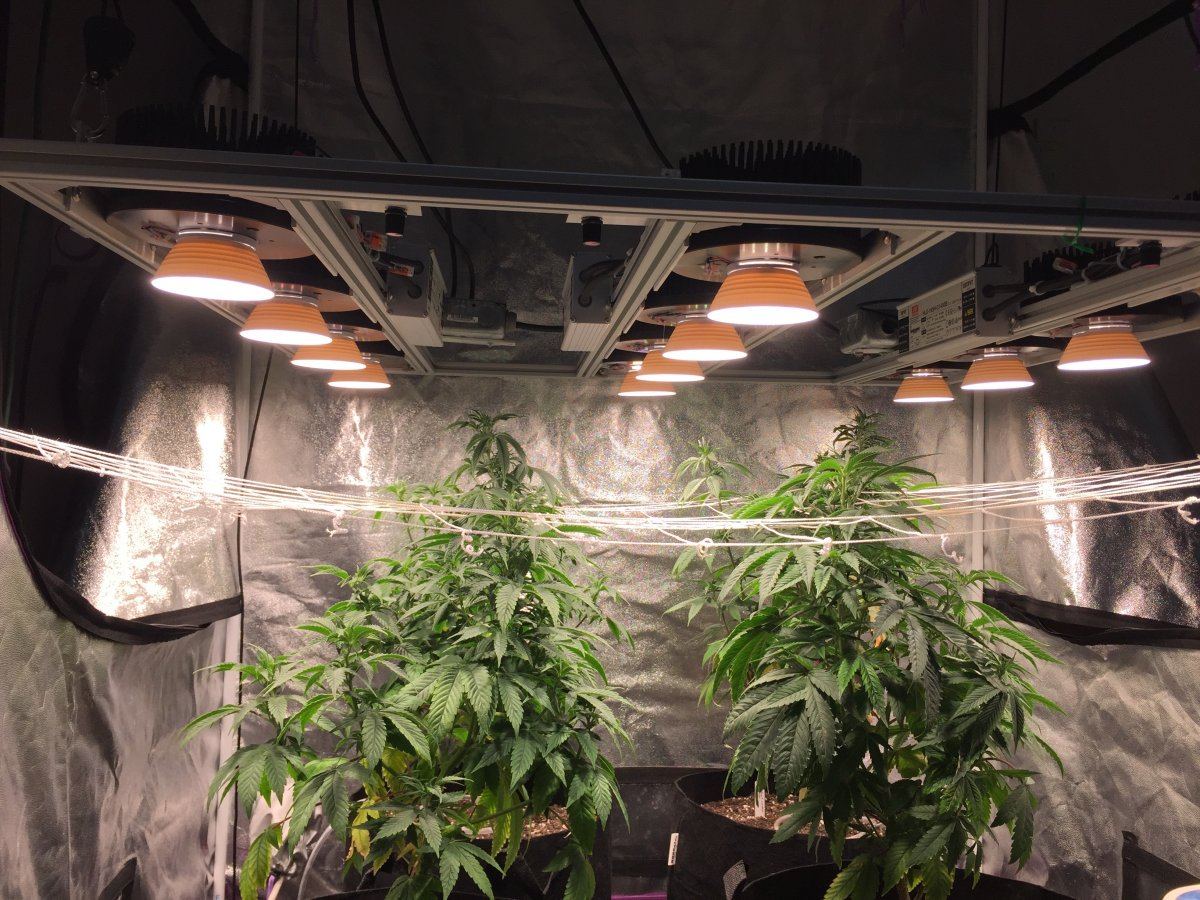 Continuing some low stress training, evening out the canopy. 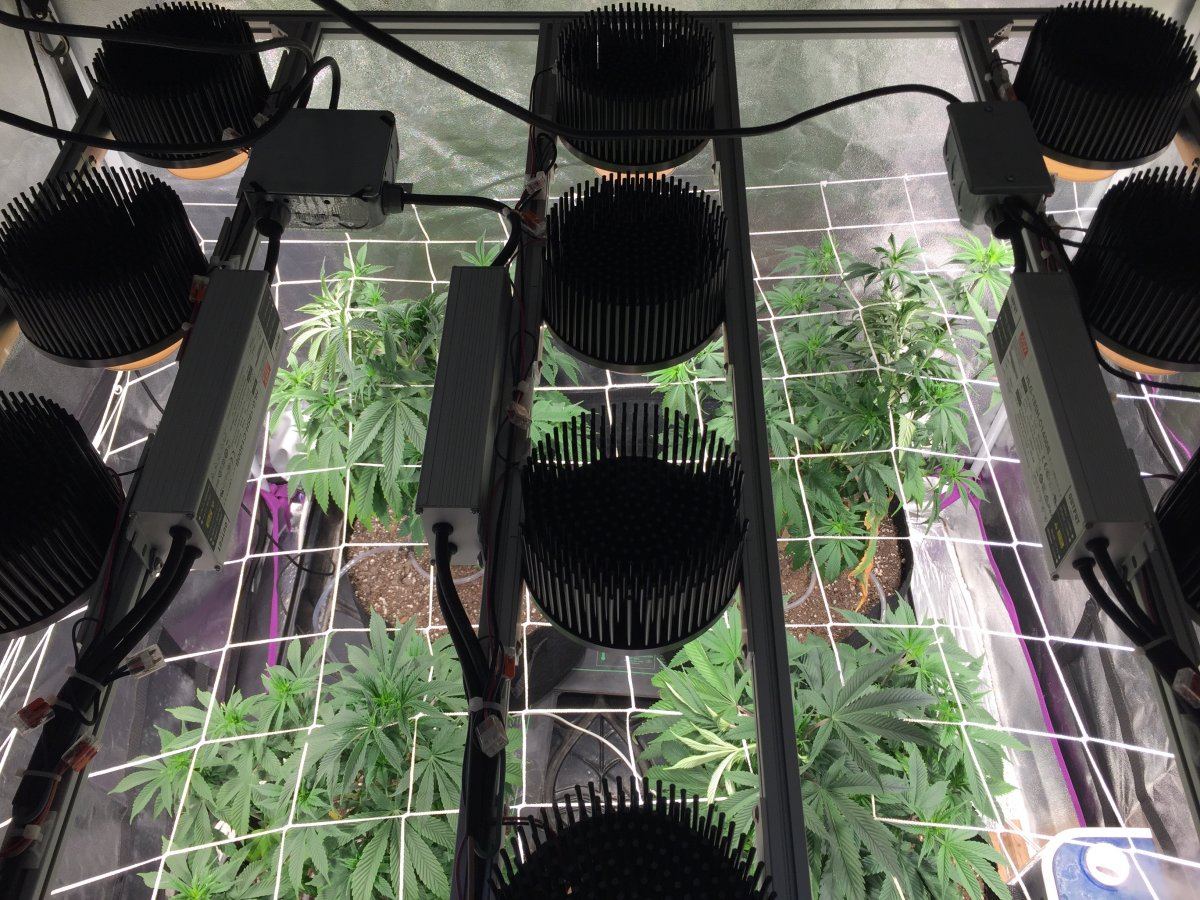 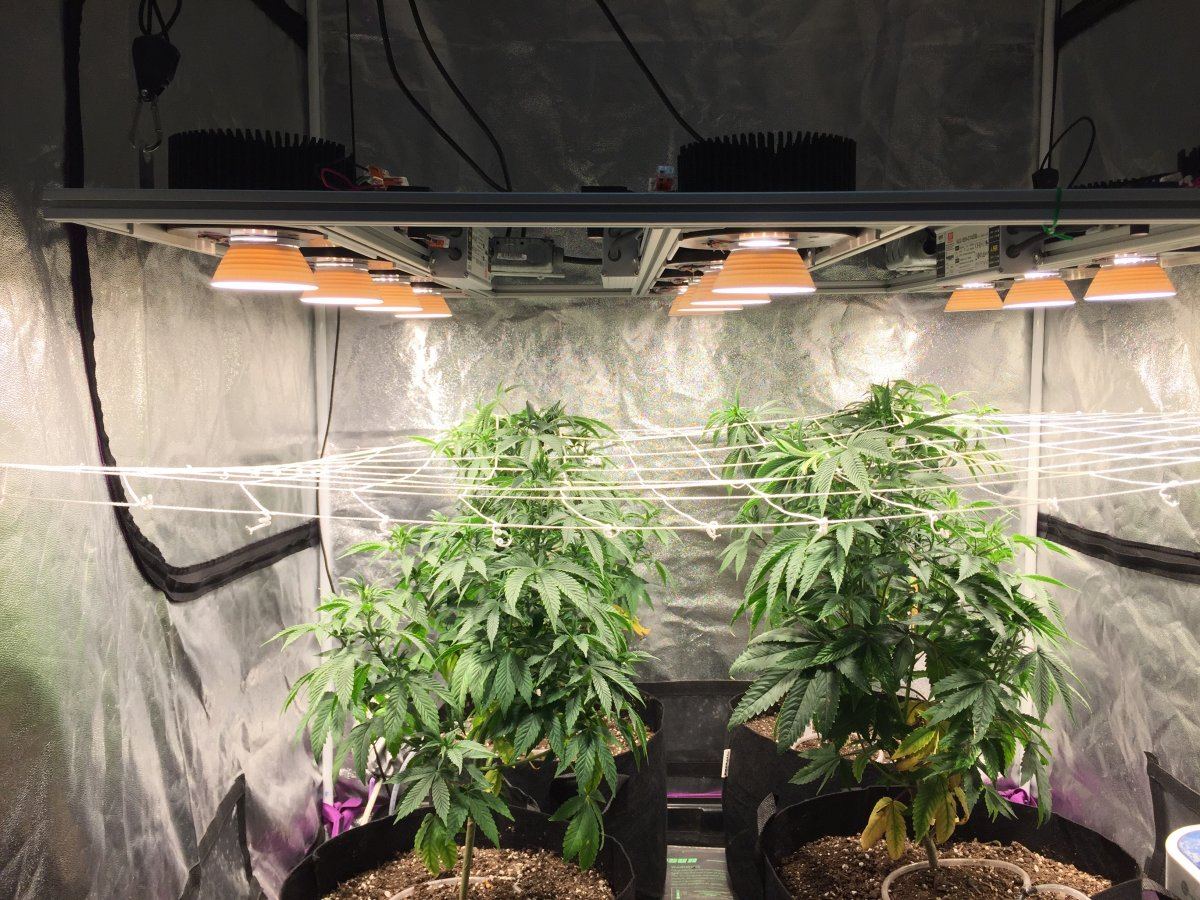 Top bud sites approaching 24” above the surface of the soil, colder overnight temps have necessitated adding aux heat via a heated oil radiant heater in the growing area. Using thermostatically controlled heating mats under the plant bags to keep the roots warm during colder after lights out temps. I’m able to maintain min air temp around 60º, which when I get ready to flip I’ll move the 12/12 on/off period to be on at night, off during the daytime, limiting any more additional demands for heating. Lights have been moved up a couple inches, not sure when after the new year I’ll chose to flip. 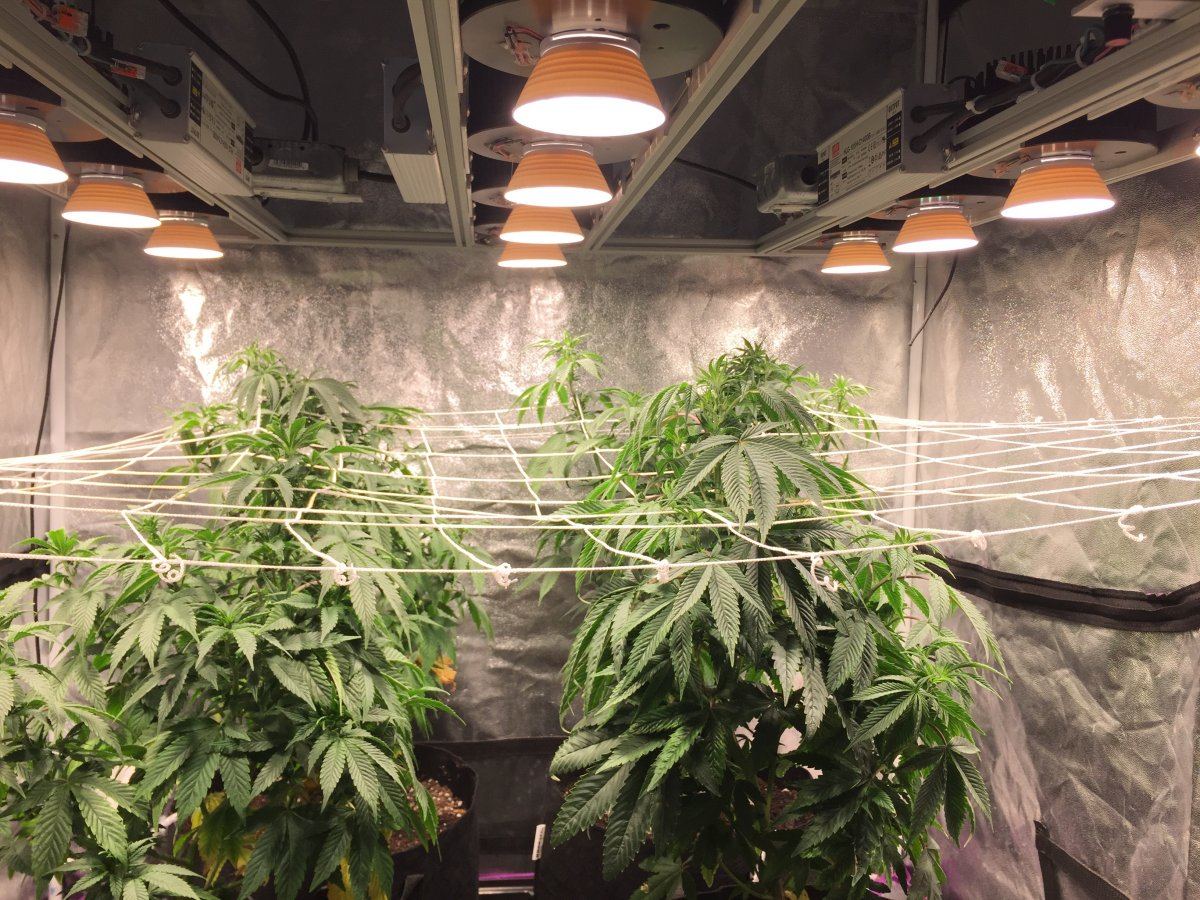 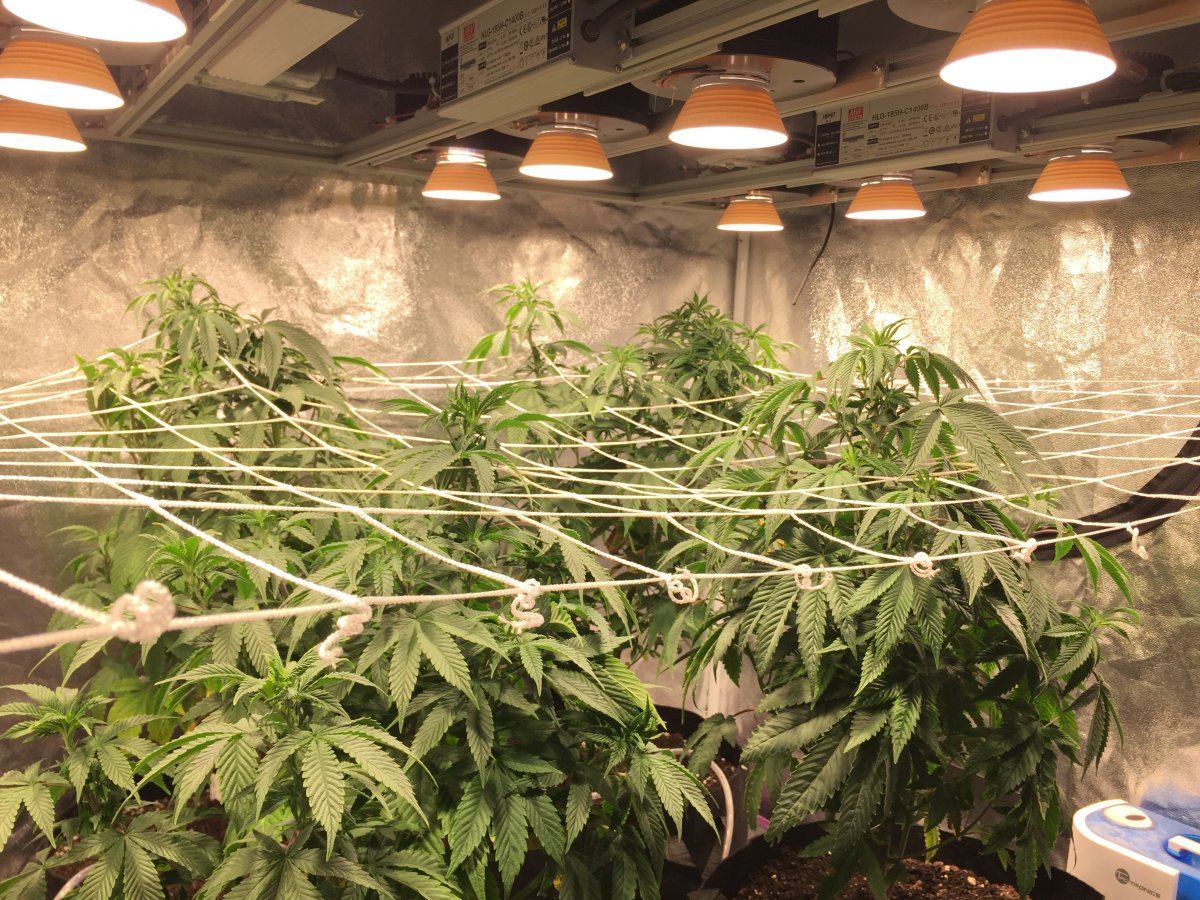 Proceeding along canopy getting it together. 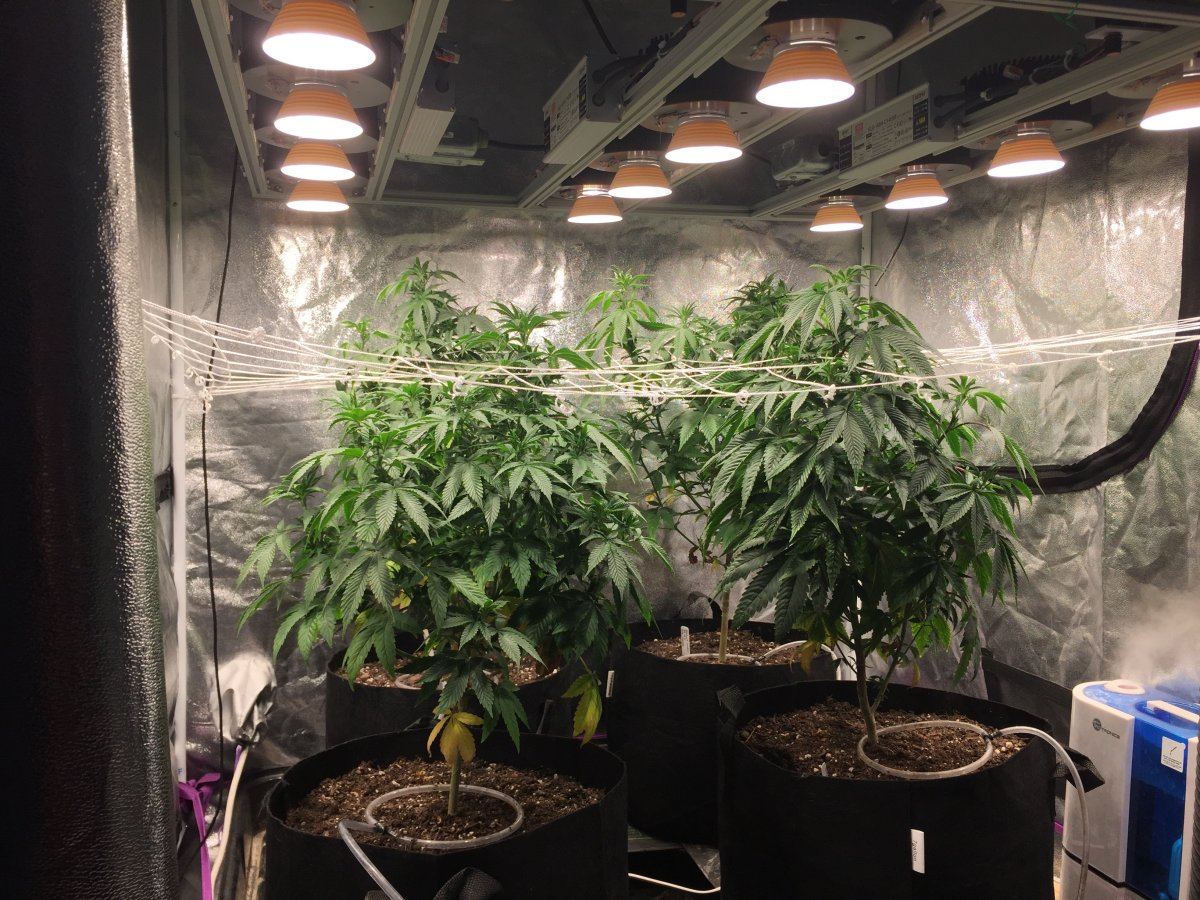 Progressing along, raised lights a bit. 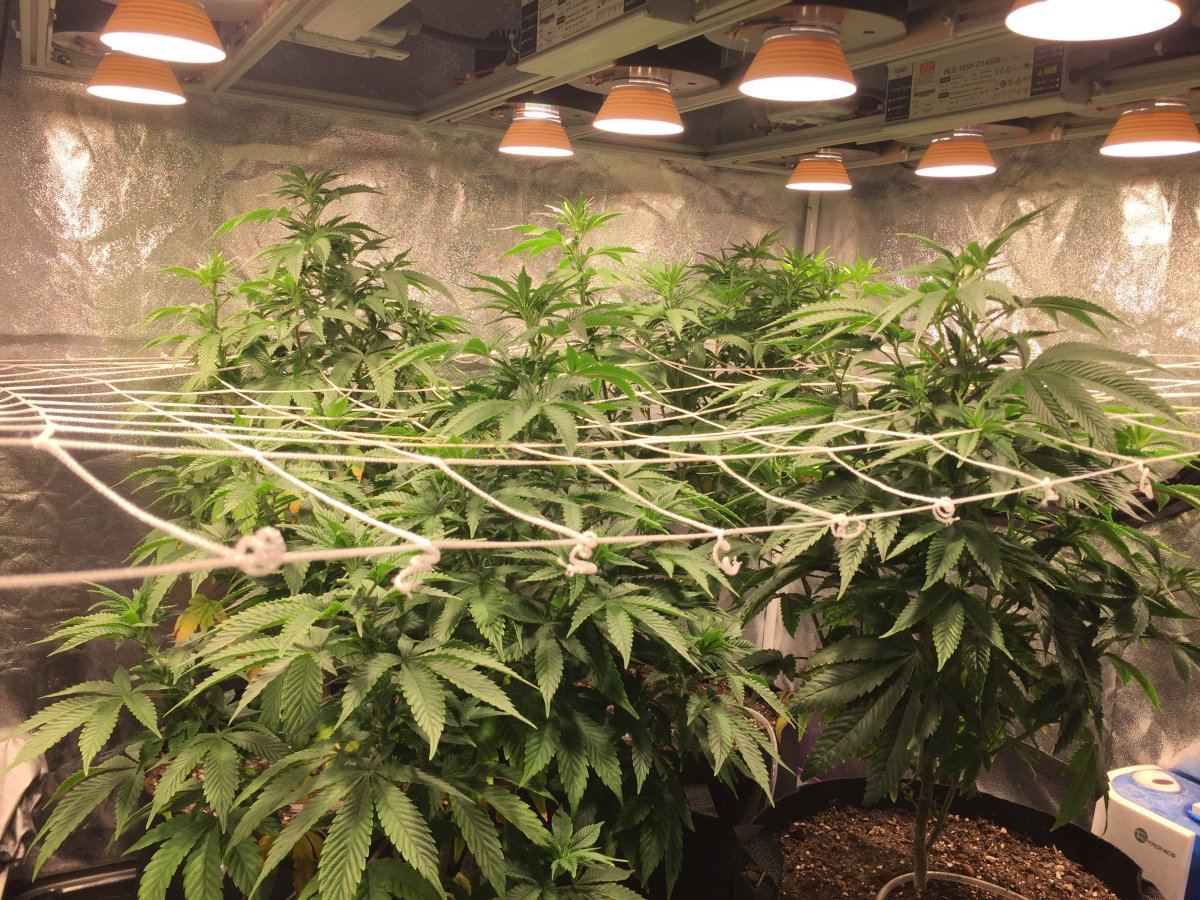 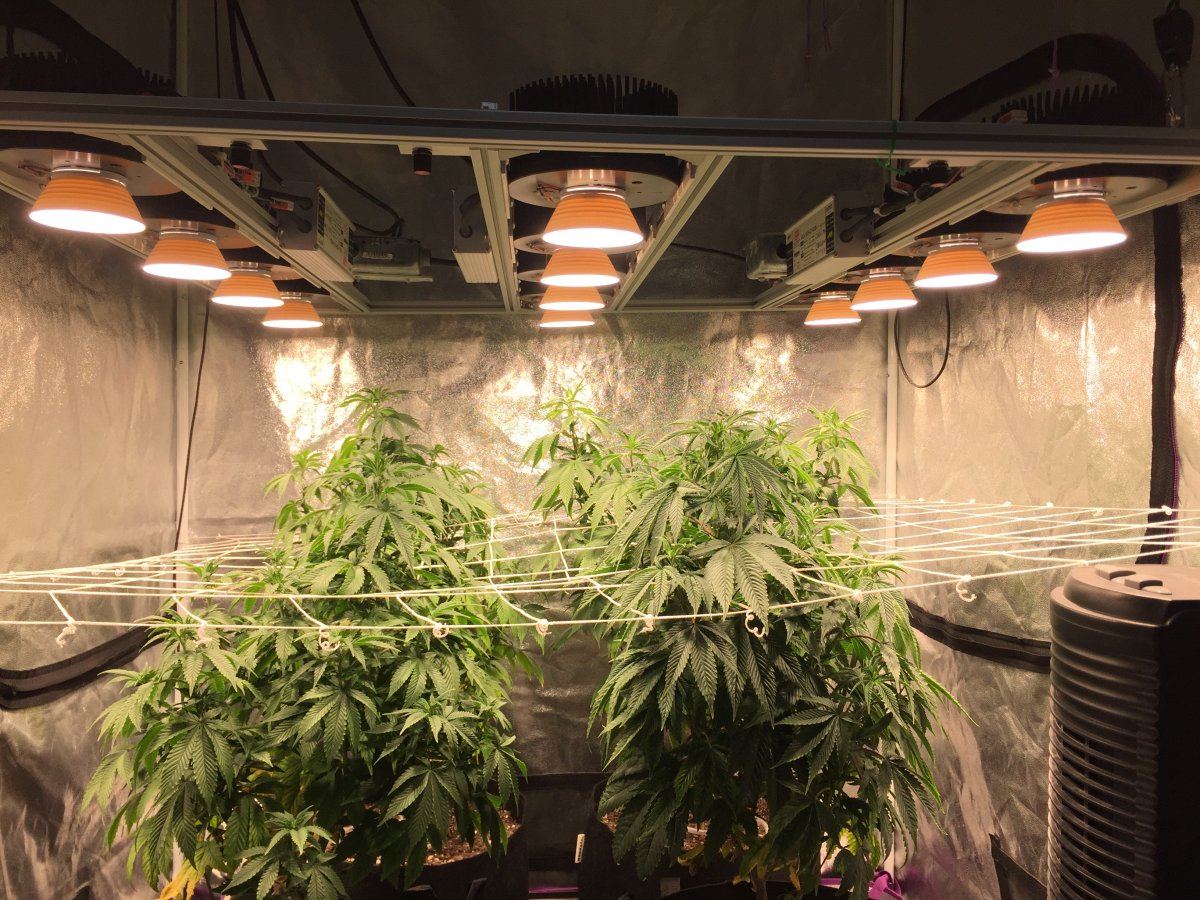 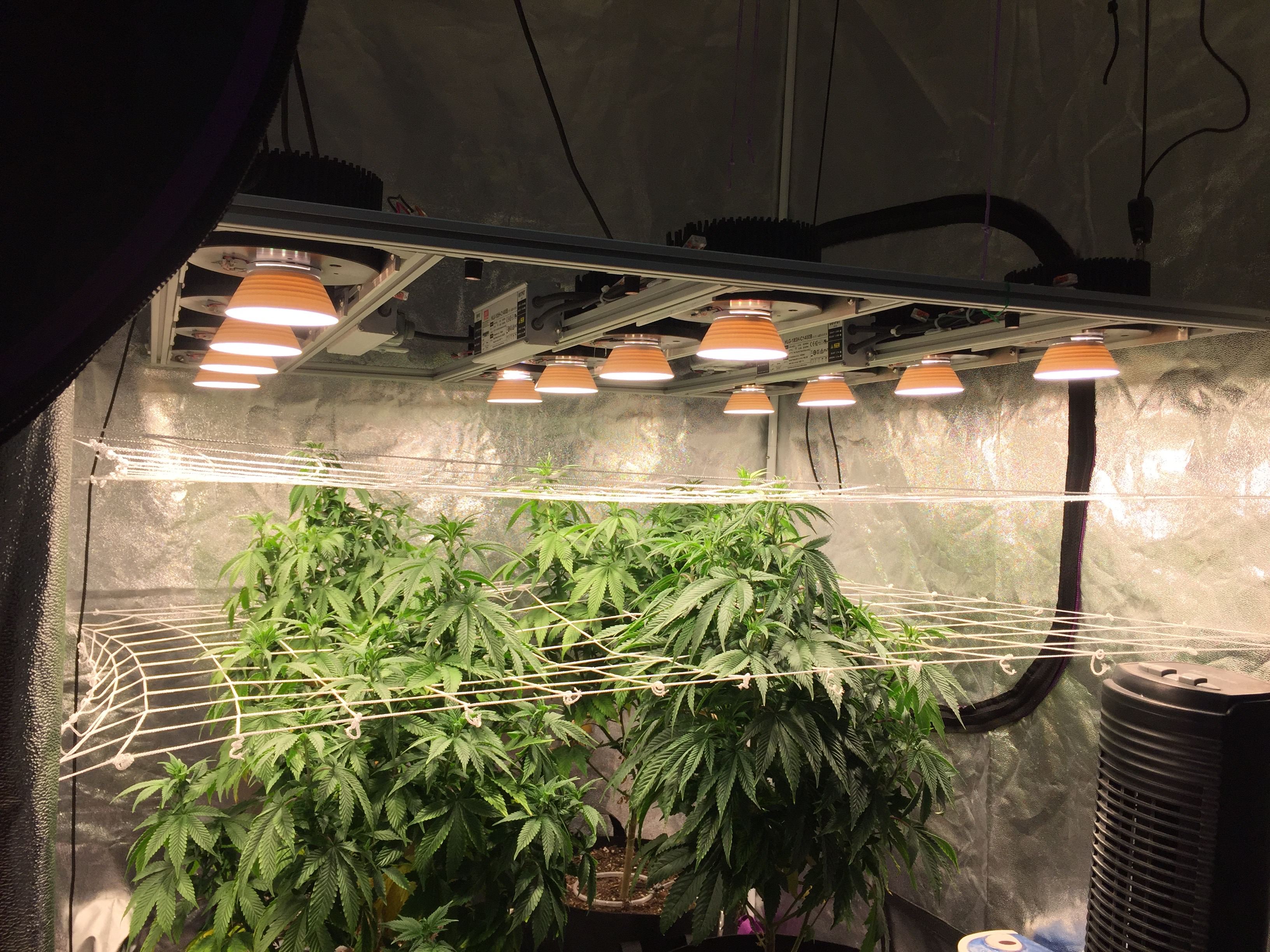 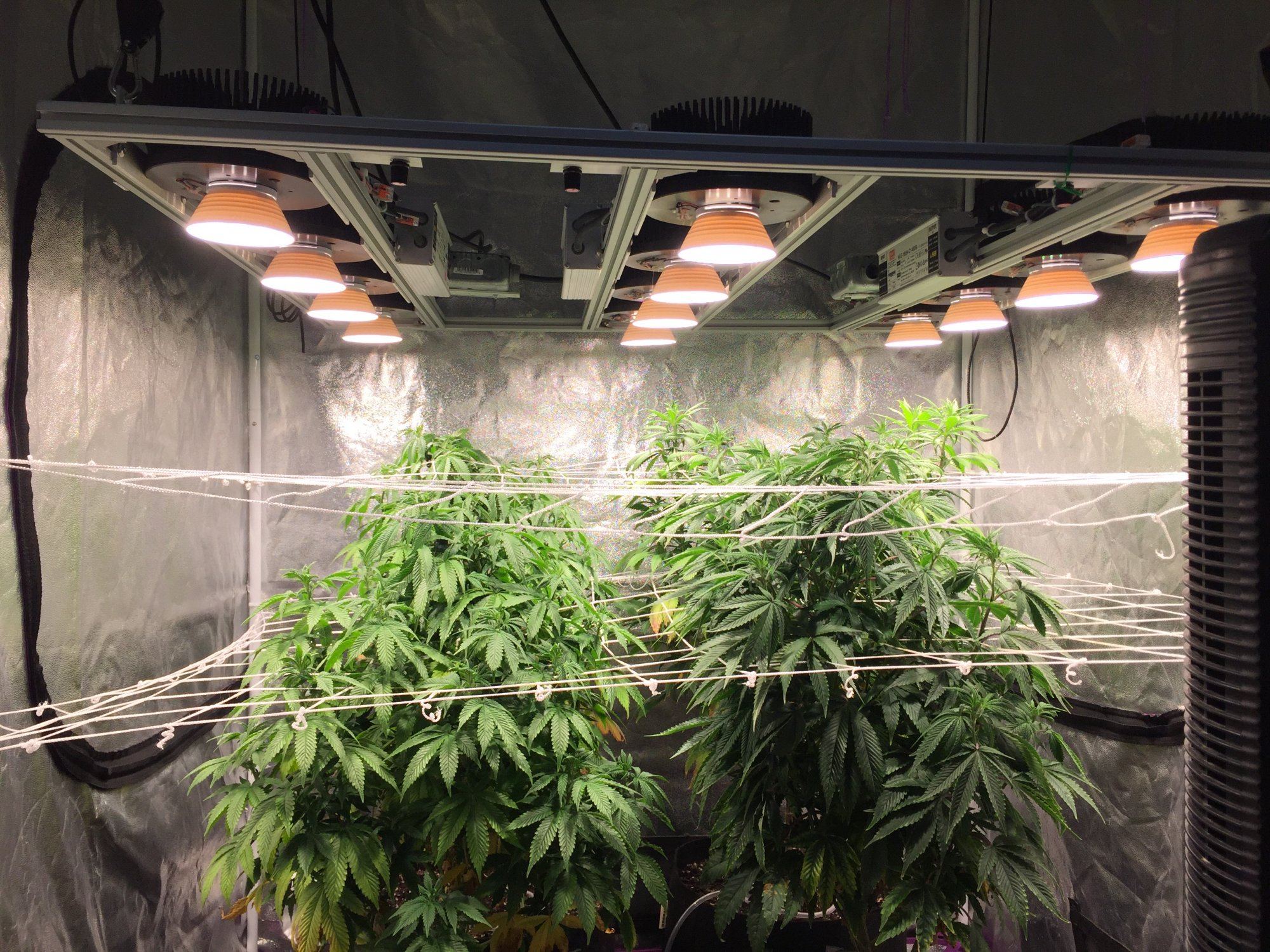 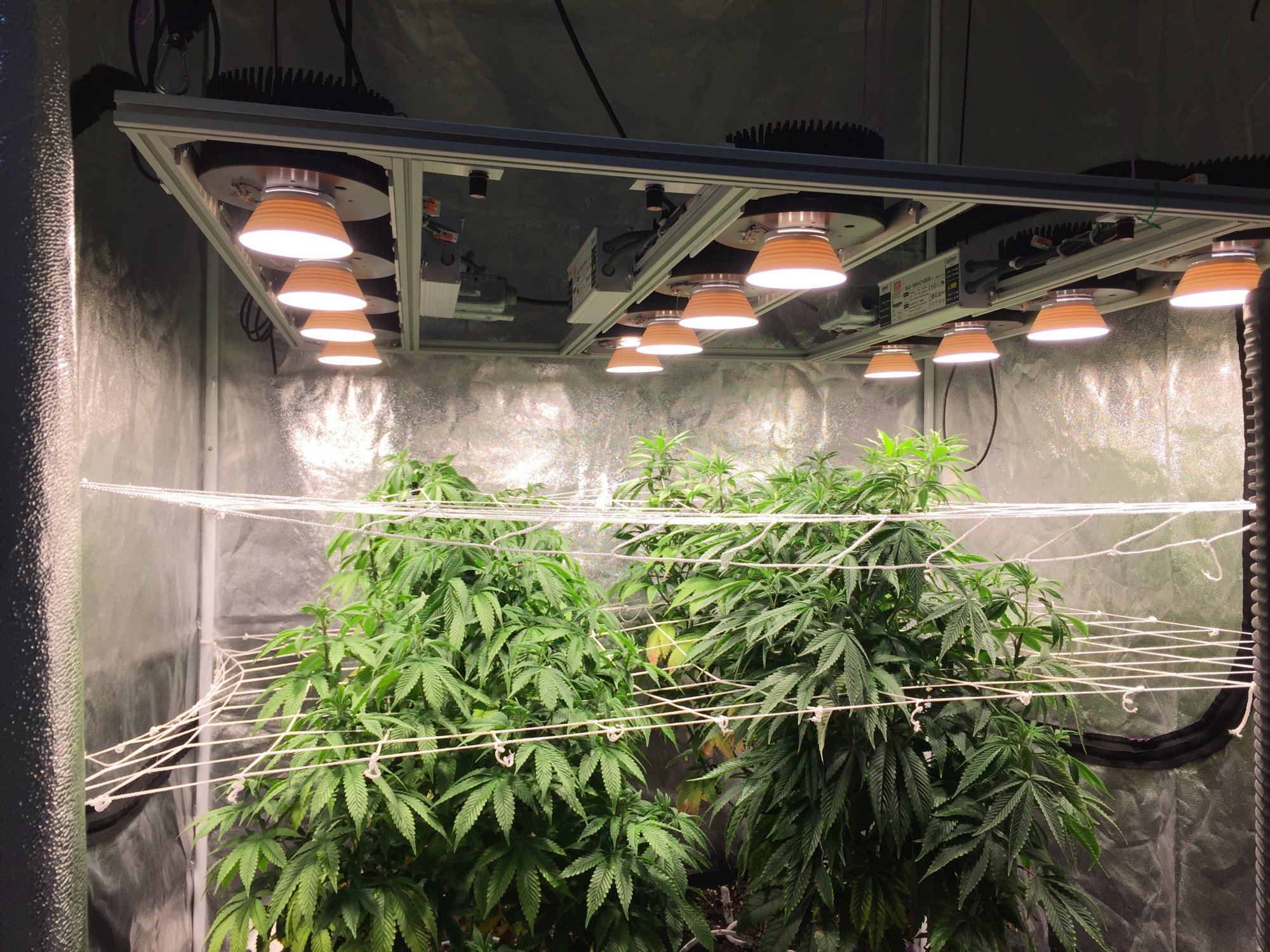 They are going to get huge!
https://www.thcfarmer.com/community/threads/mimed’s-perpetual-thread.102720/

That’s the idea, no sense fooling around with this one tent grow this year...

Progress to date...raised lights about 12” as the one plant is showing some stress (bottom photo) with the clawing tops, temp range 63-76º humidity controlled via dehumidifier to 45-50%. Flipped on 1/8/20. Running on 6:00pm - off 6:00am bloom cycle to alleviate the colder nighttime temp swings with lights warming the grow room and tent. 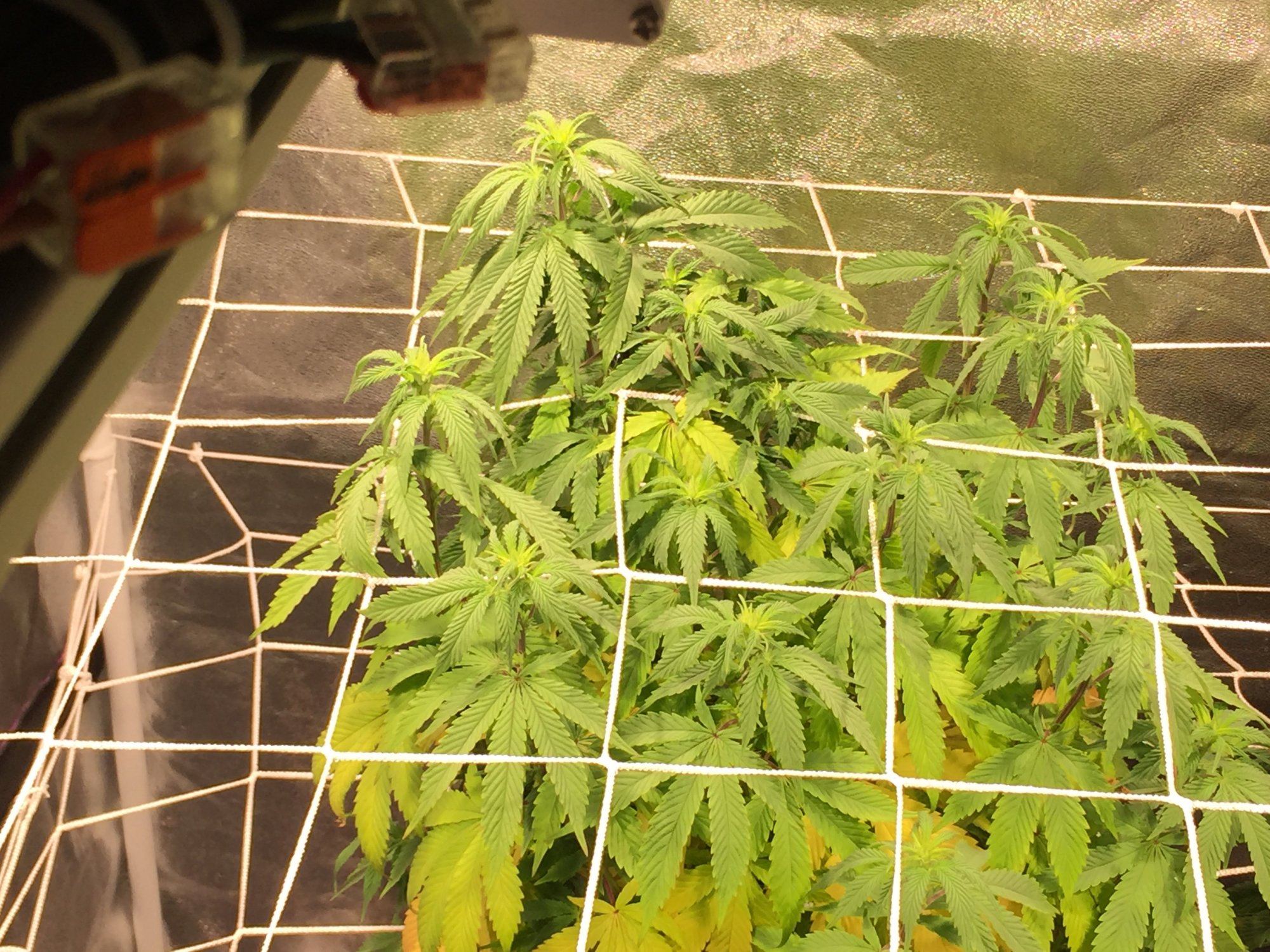 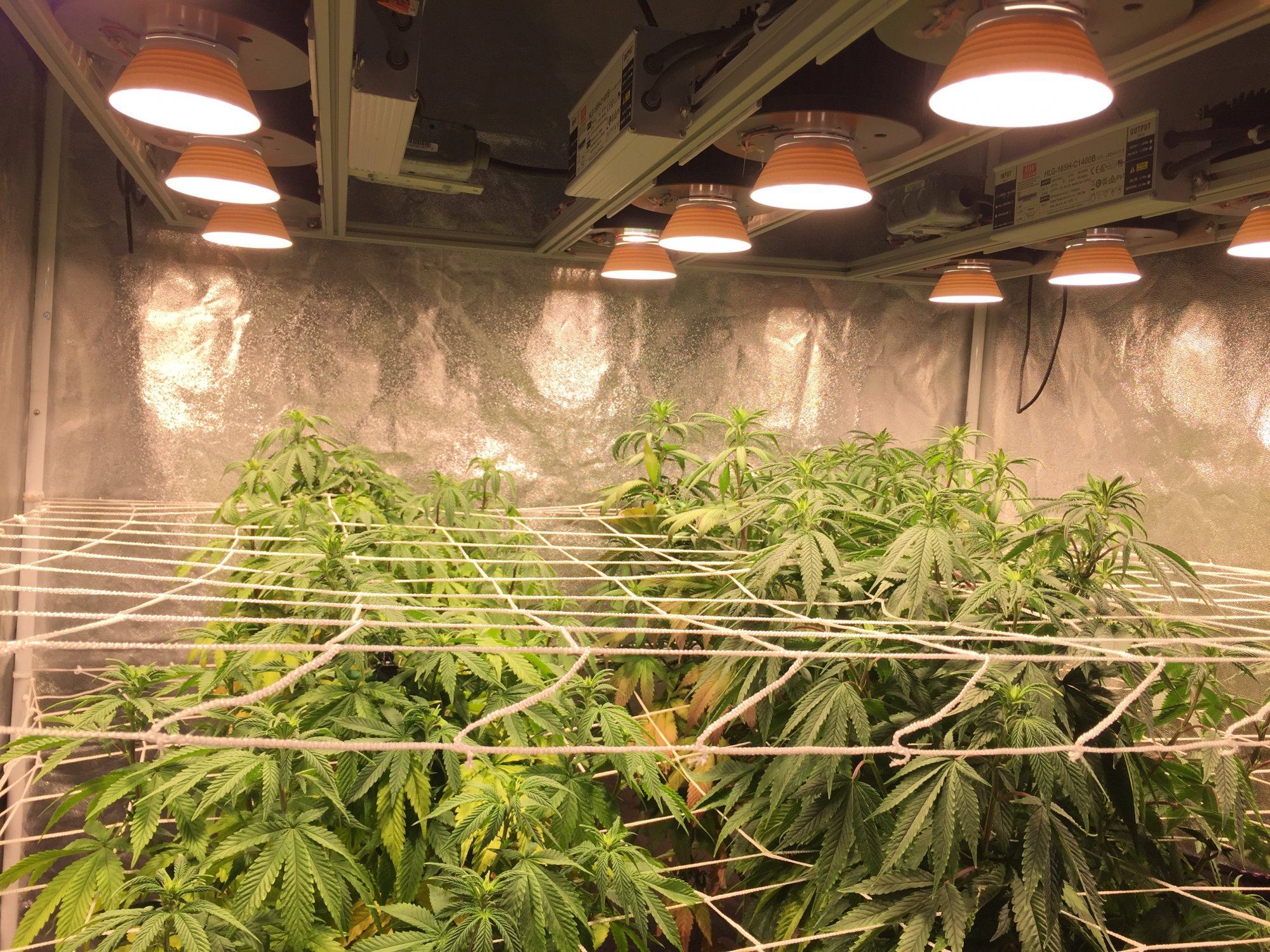 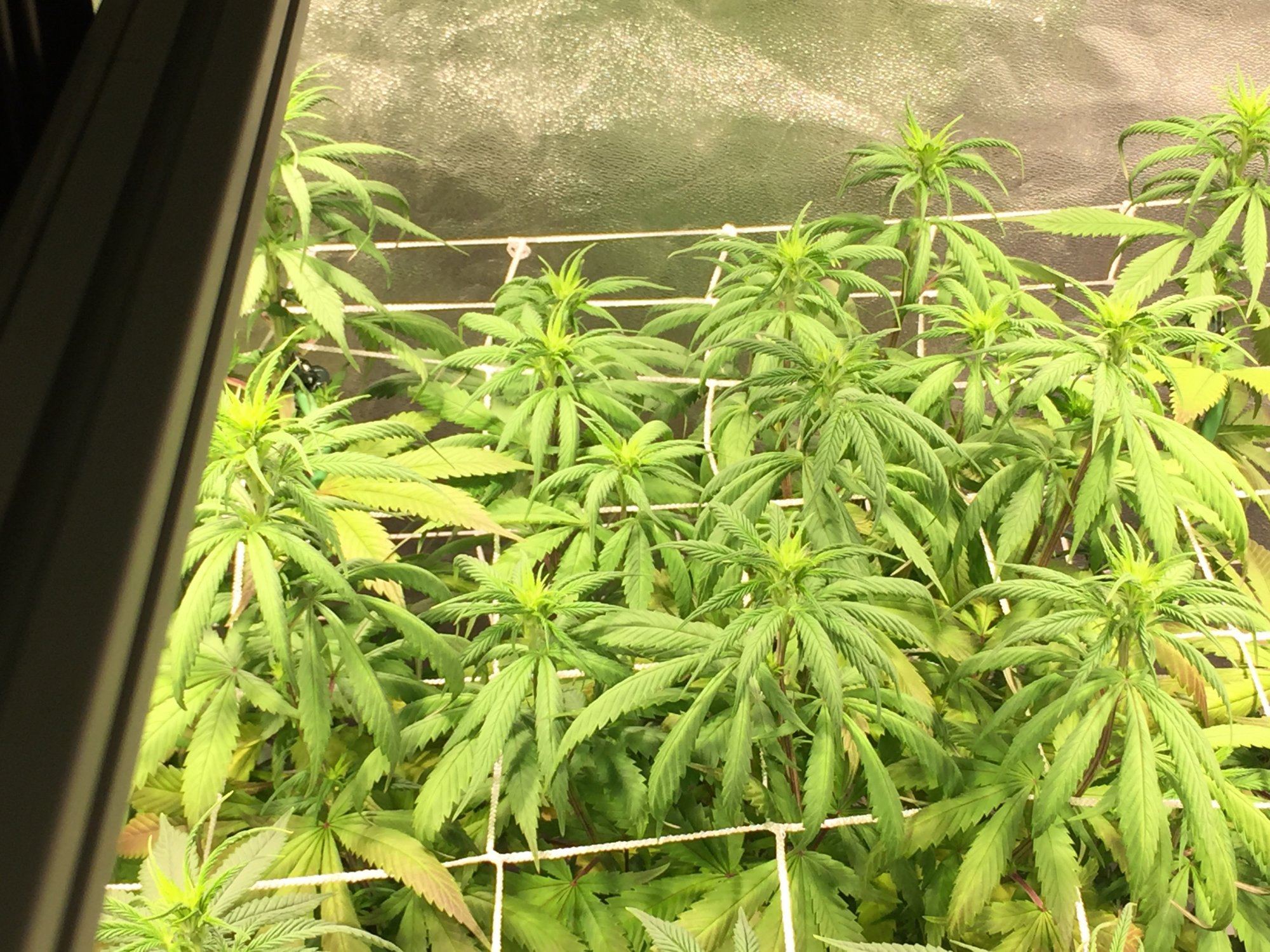 So this week, discovered a male, moved it to another tent, but discarded that idea and tossed it. The first shot is the two days after initially discovering it’s male identity, ready to blow pollen all over...
Anyway have three remaining females, and though one is still a little stressed, don’t know why, but am glad I got the male chopped and out of the tent when i did. 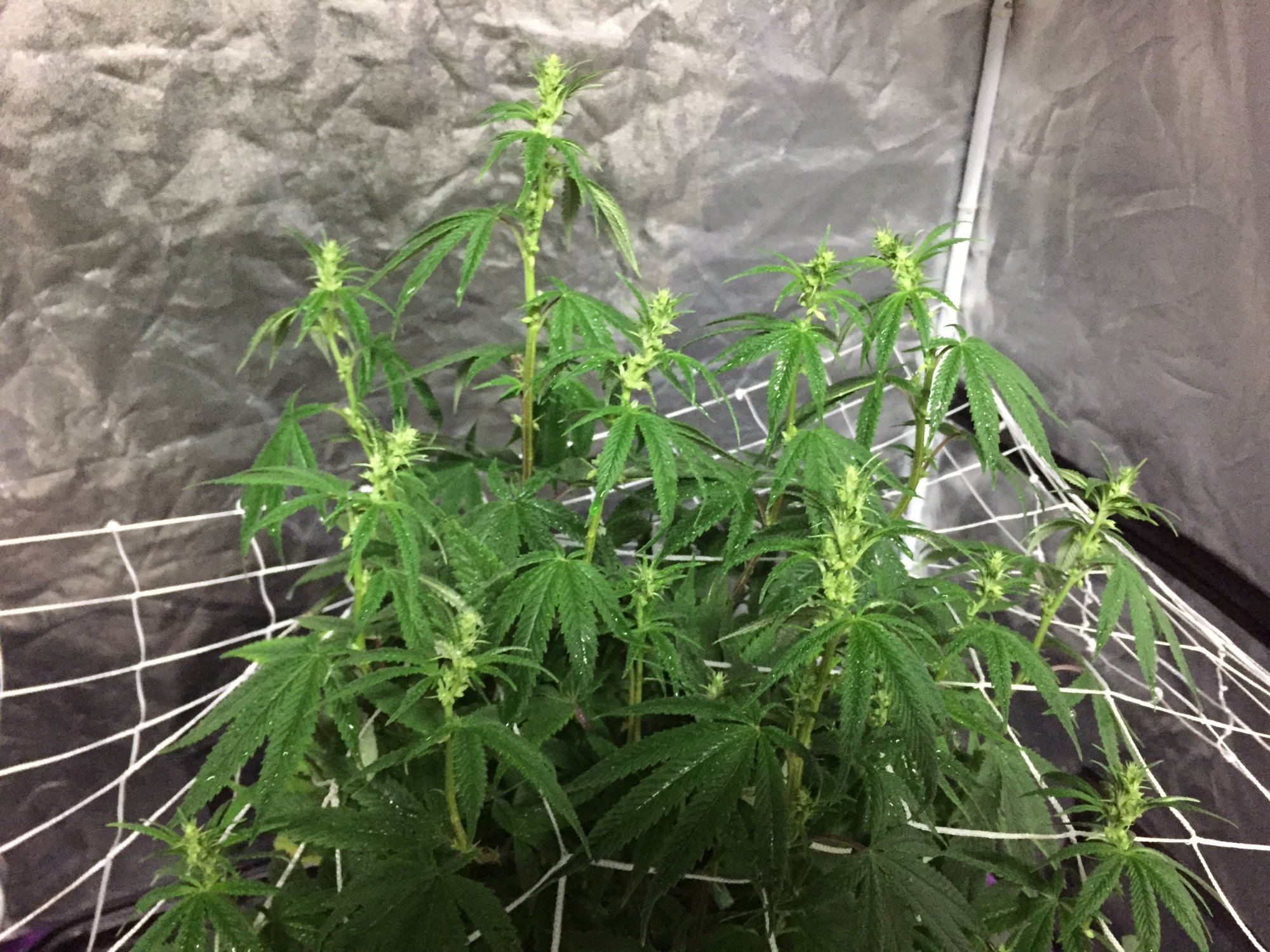 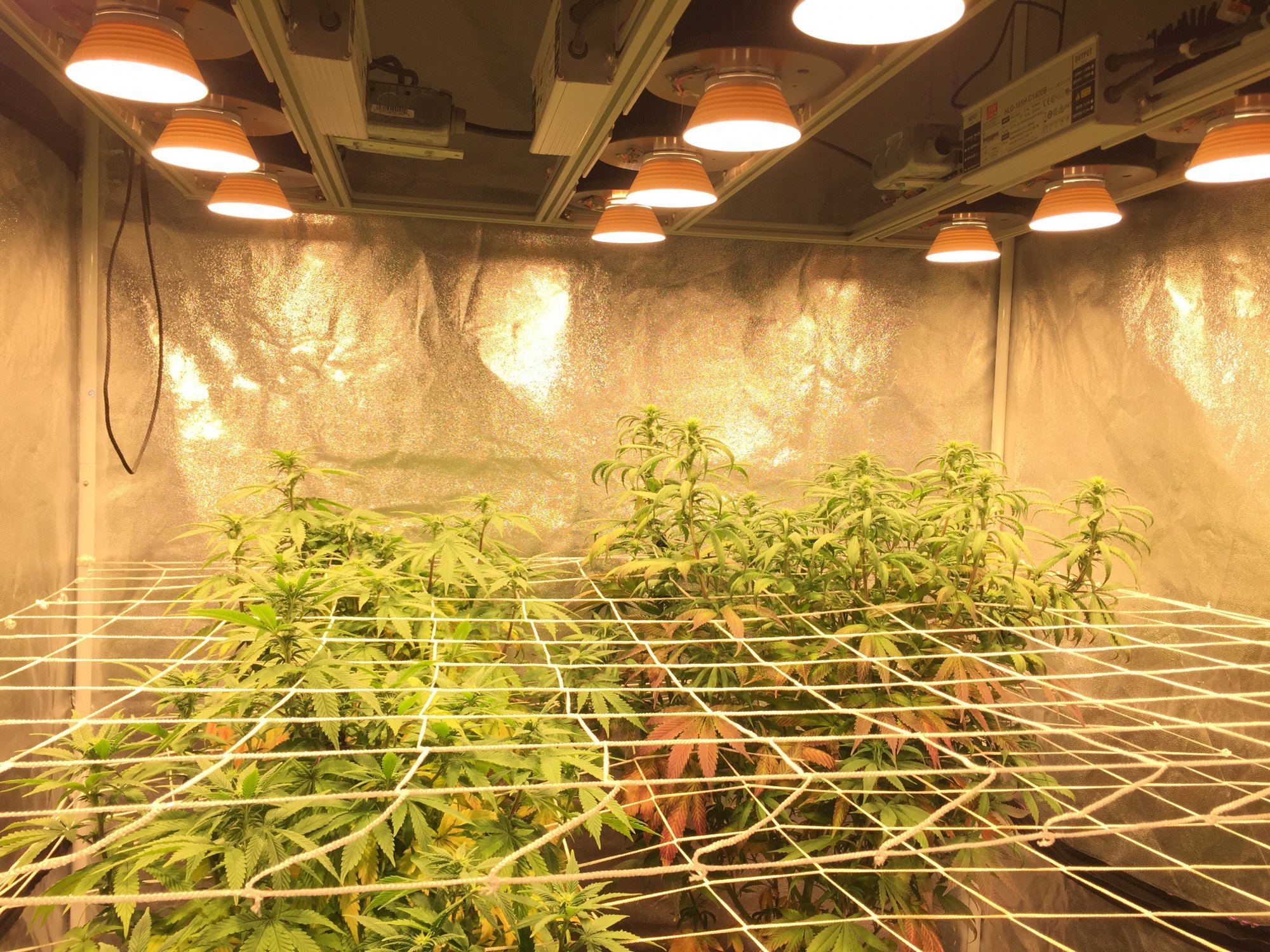 So the trauma from last week is past, everything else is looking good... 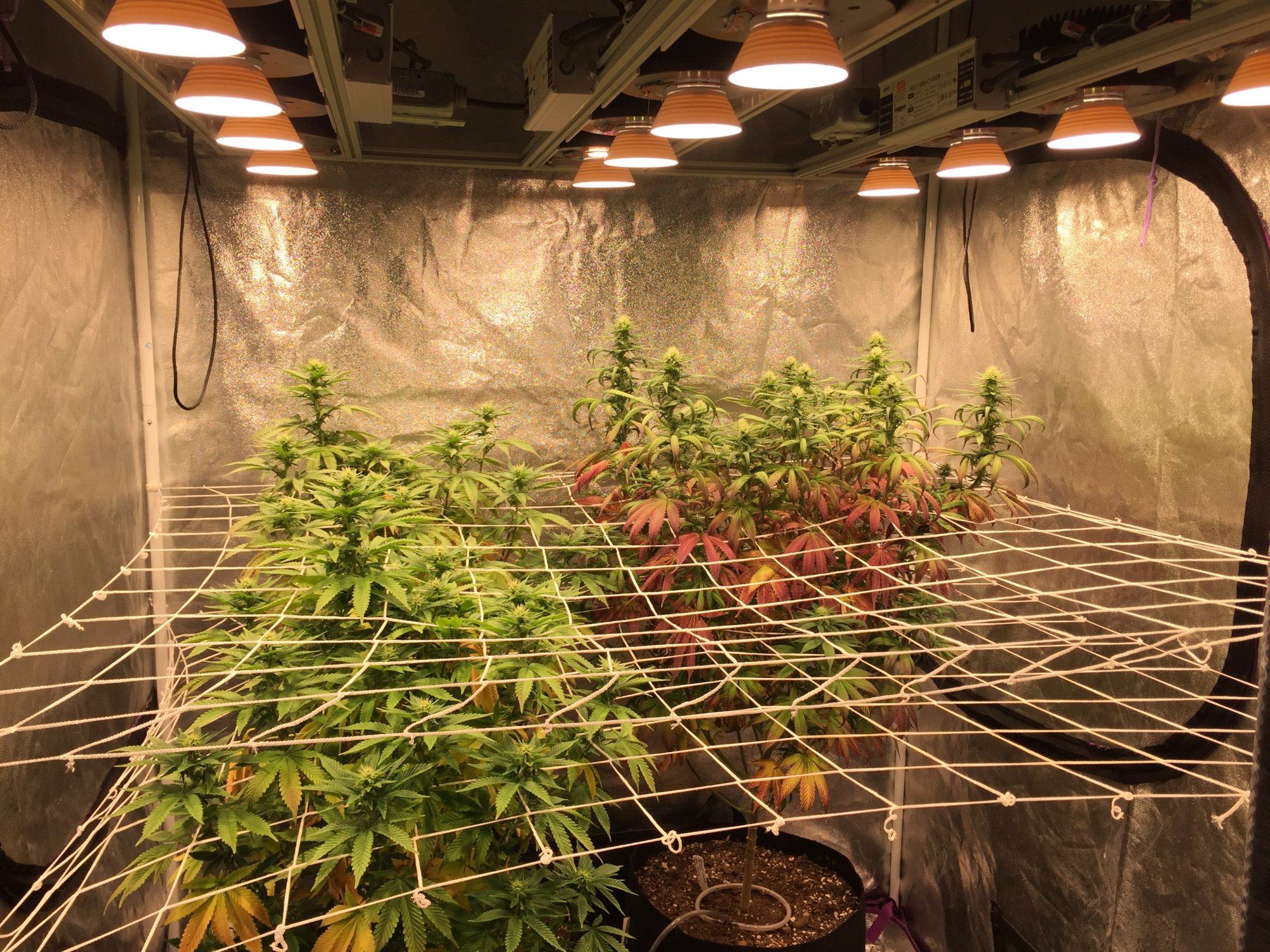 Here's the update taken last night during lights on, buds getting a little fuller, took these with my other camera with a white balance, so color looks different. 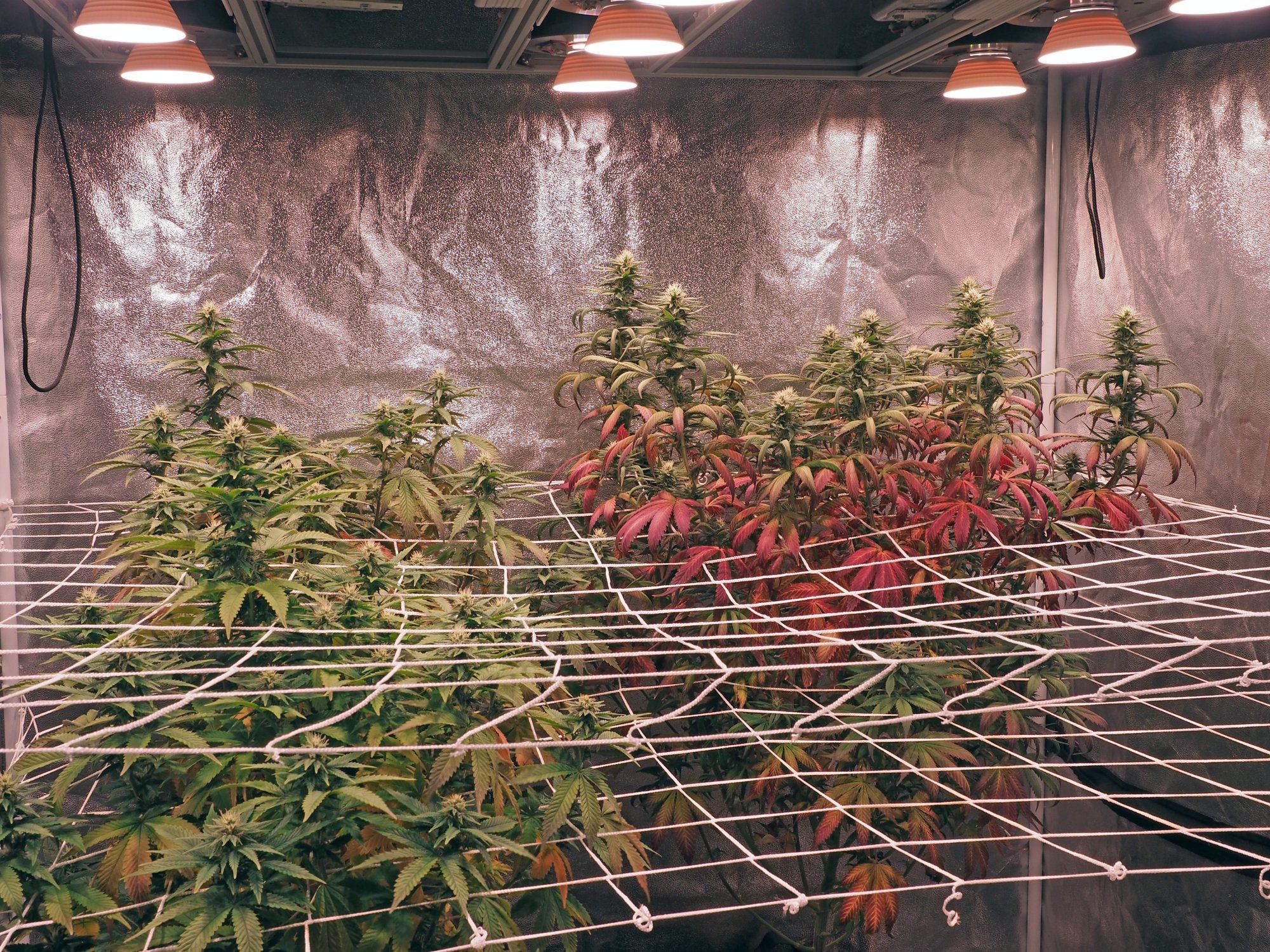 Taking over a commercial grow