Is This Nute Burn?

I noticed a couple of brown spots this morning just before speeding off to work and some leaves that weren't doing to great, I'm wondering if this could simply be nute burn?

Why do I assume this? Because when I read off the famous deficiency chart the only cause for these symptoms would be a late-stage Mg deficiency. I didn't have the time to check PH this morning and will follow up with that, but I don't see how this could be a late-stage deficiency if it only just appeared. Furthermore, these girls are fed using the Hesi Soil Pack which, supposedly, auto adjusts PH to optimal levels (So no Fe or Zn lock-out) and should prevent a Mg defiency...

LittleDabbie said:
Try uploading the picture to the forum...
Click to expand...

Those links don't work thus you need to upload to the server.. It will work .. I do it all the time.. 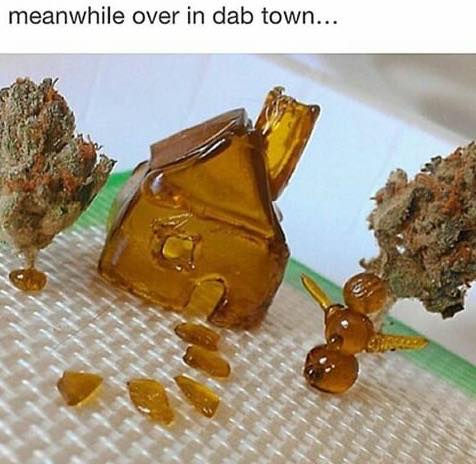 Got it, here ya go!
Sorry for the shitty quality but like I said, I was rushing out the door this morning and just wanted to check up on them... 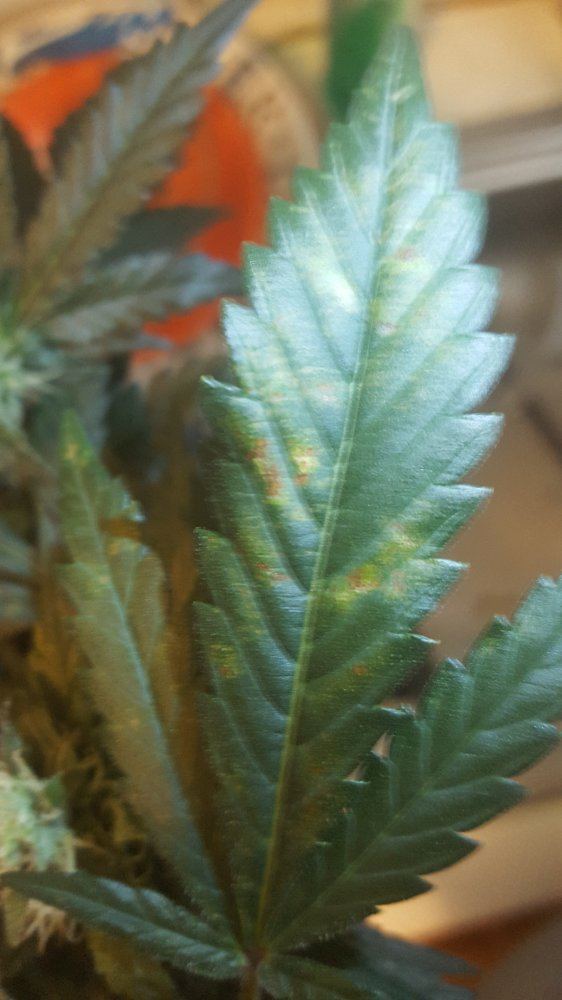 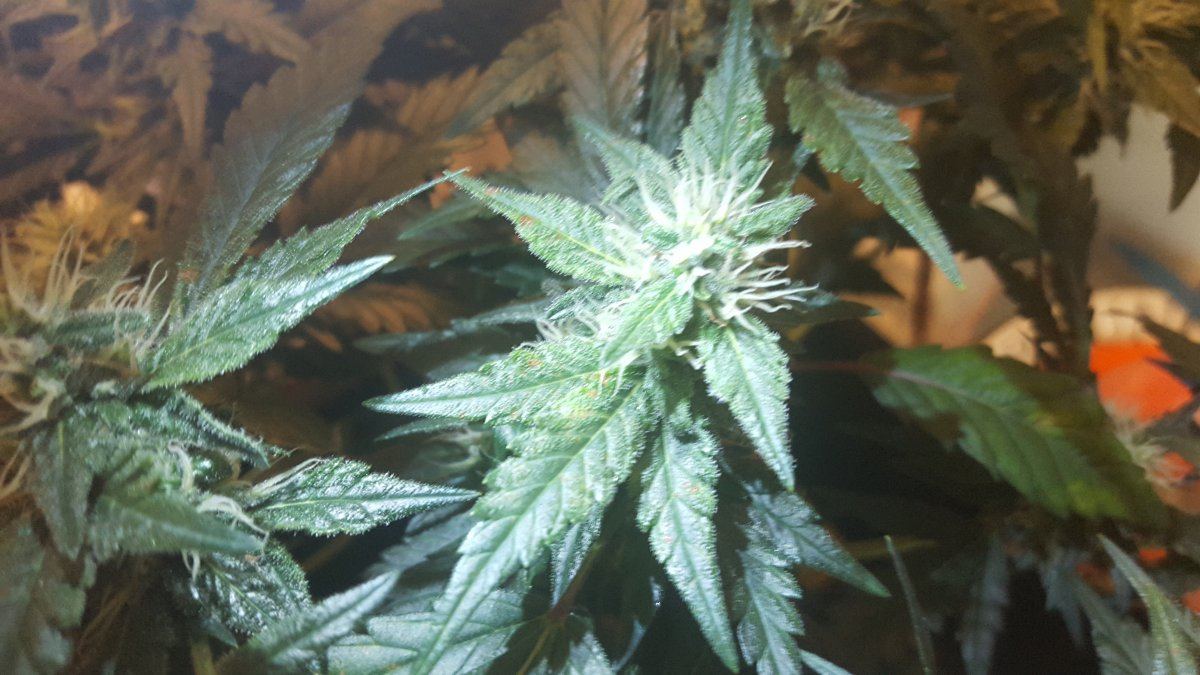 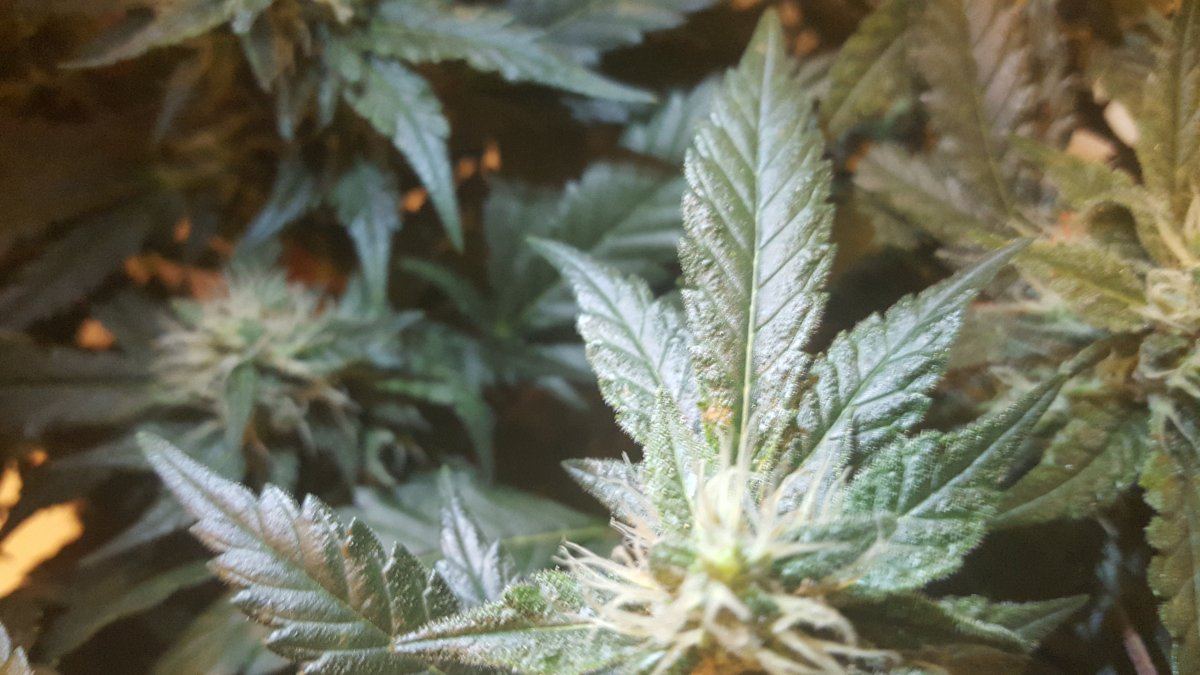 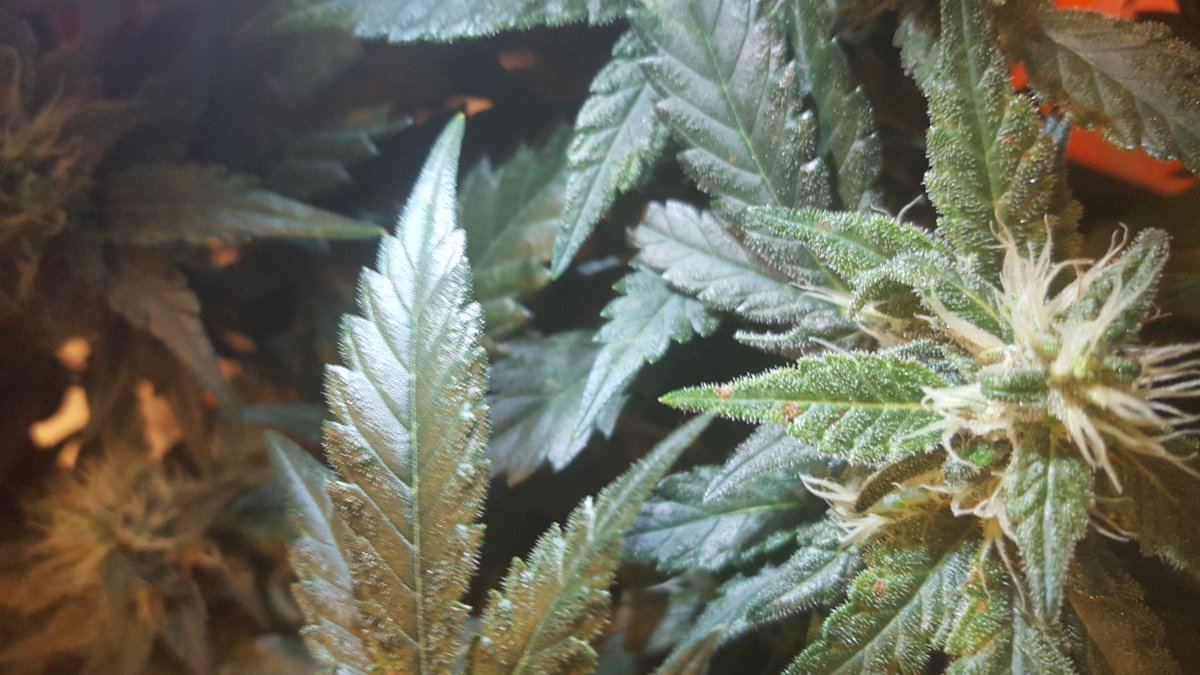 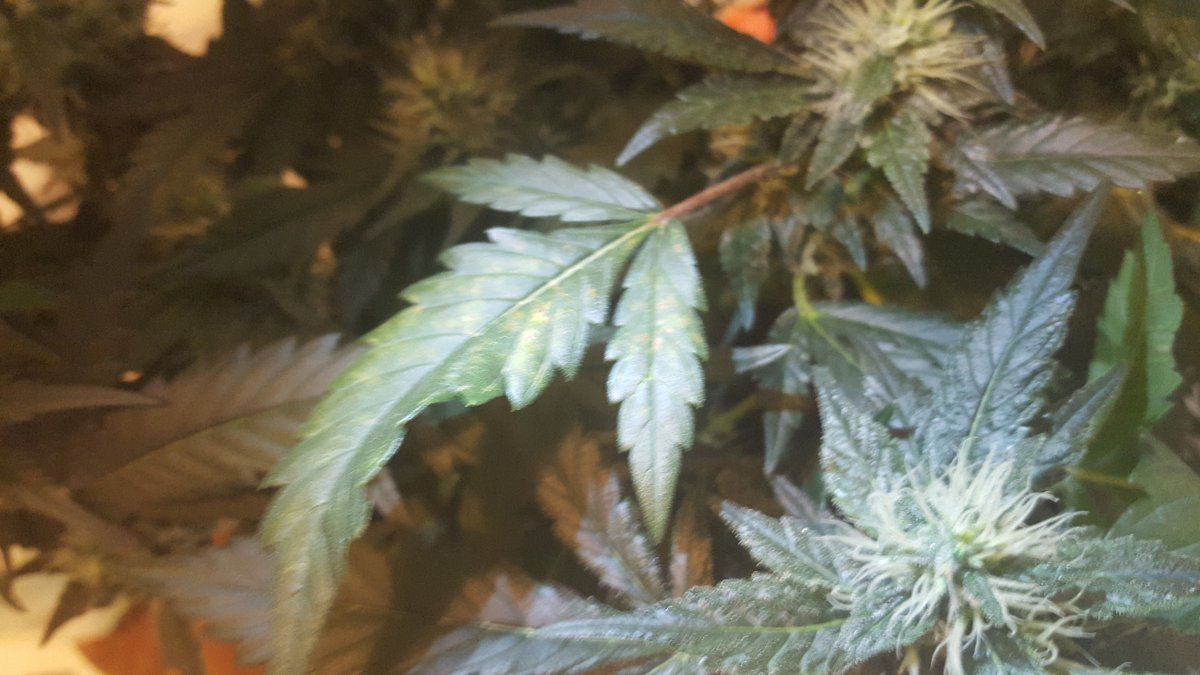 No, that is not fertilizer burn.
A hungry fish is a healthy fish. <*)~`><{​
The Charts--Nutrient Deficiency Diagnoses Made Easier

There is no such thing as a "cal-mag" deficiency

How to tell when to harvest without a loupe

Why are my leaves growing three fingers? Let me tell you why​

Seamaiden said:
No, that is not fertilizer burn.
Click to expand...

It does look like Mg deficiency. The idea is to figure out if it's locked out or if this strain needs more. You need to evaluate your nutrient regimen, check for salt buildup, consider pH, and watering techniques. Often the mineral is present but unusable by the plant. This can be due to nutrient imbalance (too much of any mineral), compacted or too wet soil, extreme pH, or a number of other things.
A foliar spray of epsom salts will correct the Mg deficiency, but the damage to the leaves will not reverse. New growth should look healthier.
Good luck!
Fire on the Mountain

Thanks for the awesome reply, I think this may be due to over-feeding/Over-Watering since this girl has been fed almost daily with full regimen of nutes. I think scaling down to 50% recommended dosage should be enough, she has already been flushed twice since the problem was first noticed and the damage doesn't seem to be spreading anyore...

The epsom salts recommendation is definitely worth looking into...

Not based on those pix, they're a bit unclear to me. It kind of looks like a Ca- in that we're looking at necrotic spotting on what appears to be an upper leaf, but I can't really say for sure without knowing more about the grow and seeing more of the plant more clearly.

But, let's say it is an upper leaf. That disqualifies any mobile nutrient for the most part as those deficiencies occur on lower leaves to mid-plant (classic tell for K issue is that it's occurring mid-plant). We're back to immobile minerals then. Does anything else resemble Ca? Not really IME.

Going with Ca, we have to consider not *just* how the plant is being fed, but what its environment is like. We need to know whether the vapor pressure deficit (a measurement of transpiration... potential I suppose we could call it), which is the interplay of temperature in relation to relative humidity, is within acceptable ranges. Why is this important? It is the heart of the plant. Transpiration is what moves everything through plant tissues, so if VPD parameters are very far out of range, you may see problems such as poor movement of Ca through plant tissues. Or something like that (honestly, the botany stuff gets a little heady for one without the formal education and there are others who have a better grasp on how to explain it than I).

A very good post on transpiration has recently been posted up, but IIRC there's some good discussion of VPD ranges and such in the thread in my sig line, The Charts.

Sorry for the wait, but I'must back with new photos and more info.

So the problem hasn't spread much and the plant is still healthy. Temps are a little high, between 25°C and 30° , the weather has been unpredictable lately and the grow space is small. Humidity staying under 40% and over 25%.

I ran a ph test on run off this morning, the reading was as usual around 6.2.

Below are some photos, I selected the most damaged leaf for examination; 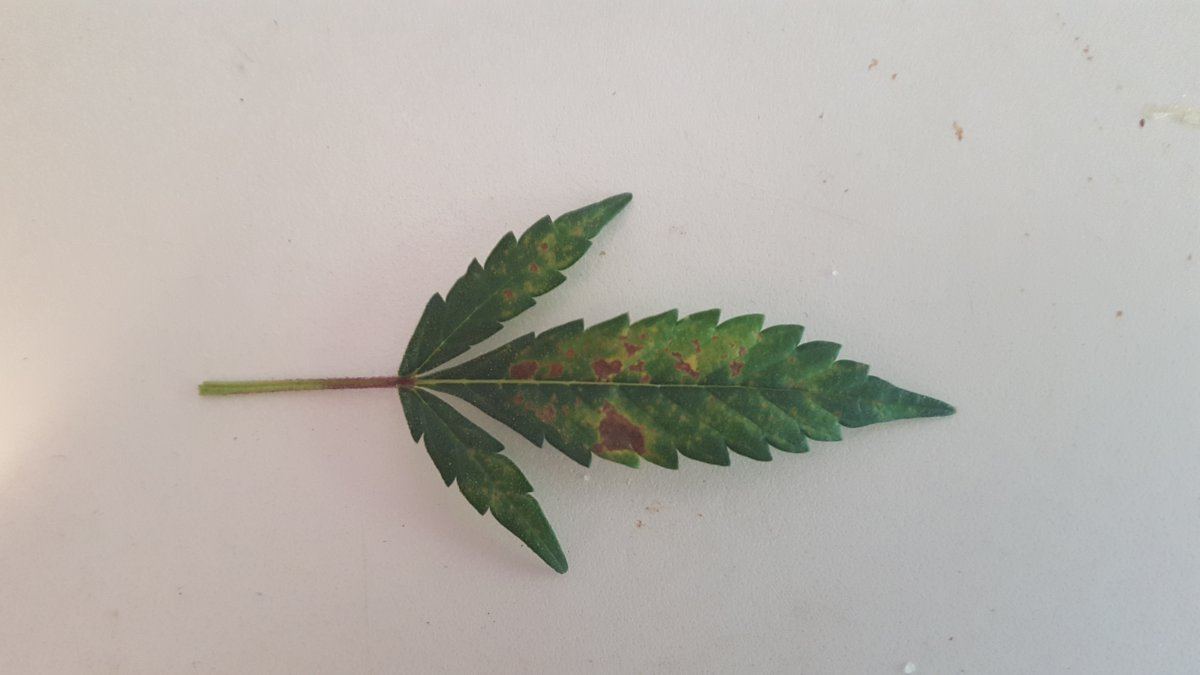 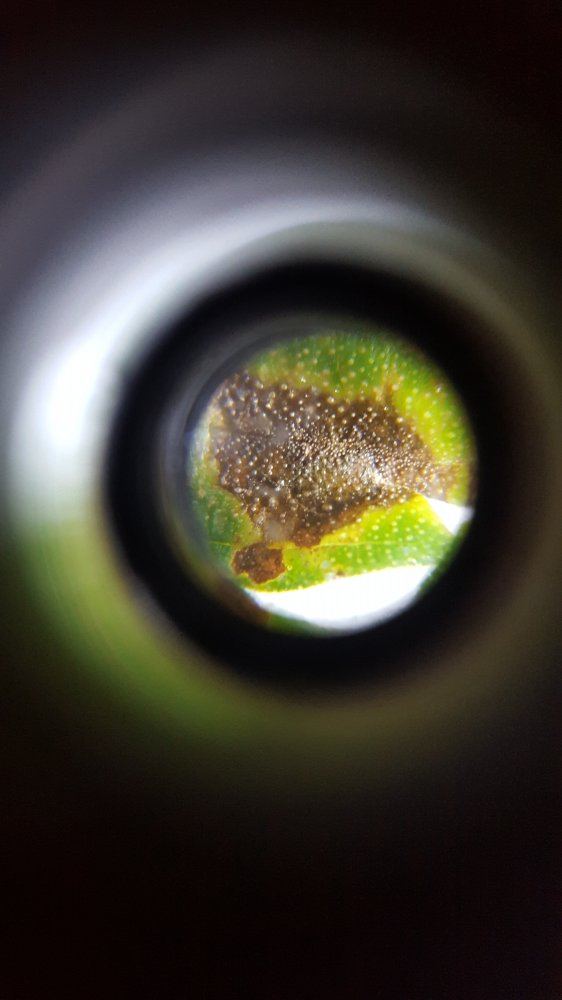 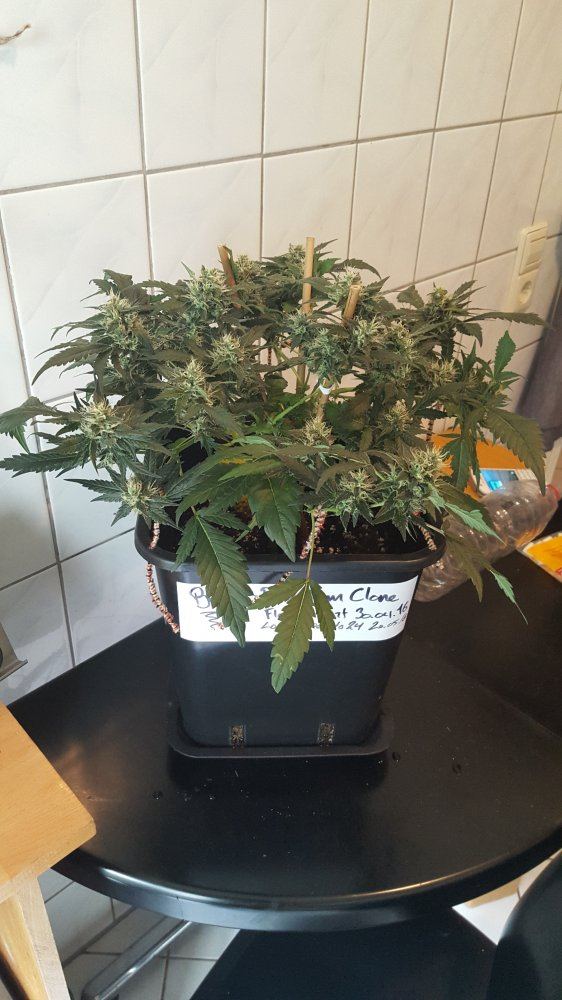 Go to this post and chart your VPD (vapor pressure deficit). I'm still kind of leaning towards Ca-, but can't be certain without knowing where on the plant this occurred. I see a slight indication of poor P utilization (the petiole) as well.

In my opinion, right now you need to correct those parameters. If you look at the chart posted you'll see that you're falling in a red zone where transpiration, and thus movement of water and nutrients, is hindered. That could explain what you're observing. If you can't concurrently lower temps, at least get the humidity raised.

Thanks, first time I read about VPD, I'll be sure to follow the advice.
You must log in or register to reply here.

Is this a sign of deficiency? I haven't fed these girls since sprout, maybe the soil is running out.

Is this nute burn - lockout - deficiency?

Is this light burn or nute issue.?

1st grow..deep into flower. Not sure if this is lockout, nute issue or normal?