.
That is an incredibly well put together grow my friend. I'm impressed. I can see the time you put into it, very well done.

Minor things to tweak honestly, and that never ends I don't think lol.

Dirtbag said:
Are you measuring your runoff ppm?

For mature, fully rooted plants in coco it is damn near impossible to overwater them.
And the signs of root suffocation and root rot, pythium or fusarium is all very similar. looks like uptake issues. But overwatering would be accompanied by excessive leaf droop in addition to the mild chlorosis thats developing. Even fully saturated the coco will hold enough O2, so long as it's not heavily compacted.
Click to expand...

Im going to pop one out and take a look at the roots. Yes I measure runoff ppm.

Dirtbag said:
Also I have to say @Tracyfri I don't really see much of an issue in any of your pics

.
That is an incredibly well put together grow my friend. I'm impressed. I can see the time you put into it, very well done.

Minor things to tweak honestly, and that never ends I don't think lol.
Click to expand...

Thanks for the kind words DB

I hear you about the overwatering. I popped out one of the smaller plants to look at the roots they were not as robust as I would have thought. Maybe it's just the one plant in general I don't think the root growth has been as fast as it could be. Decreasing the watering the amount that I tried last night was too much. I turned it back up again close to where it was originally.
I gave them a mild flush with half strength. The runoff is always between 750 and 1050ppm pH coming out at 5.7
I wish something would jump out at me LOL. Thanks to you and the other farmers I am a lot less frantic about it though. I took a big chill pill. I'm using the H2O2 my instruments are well calibrated so I'm just going to run with it

Dirtbag said:
I use 1 gal pots of coco for plants with a 3-4 week veg from clone, you just need to feed a lot more often, I was feeding plants 5 times per lights on cycle and once in the dark. It works very well but you do need to feed a lot.

Great looking room @Tracyfri, I'm sure you will pull this around. I'll have a better read through the other posts for more details of what you're doing, see if I can offer any insights.
Click to expand...

DB how much are you pulling with that system? Thats 3-4 weeks in 1gal from a rooted clone correct? 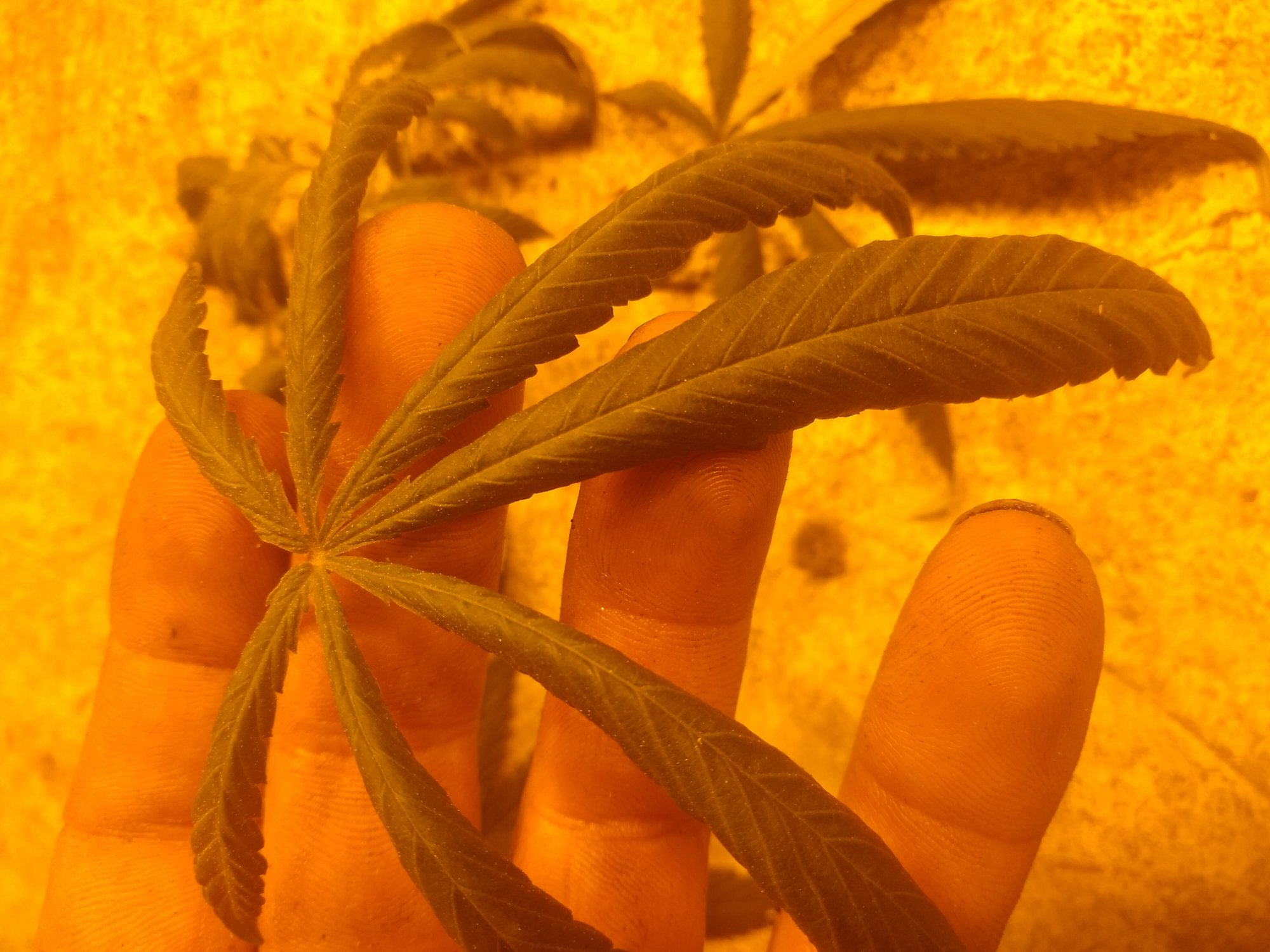 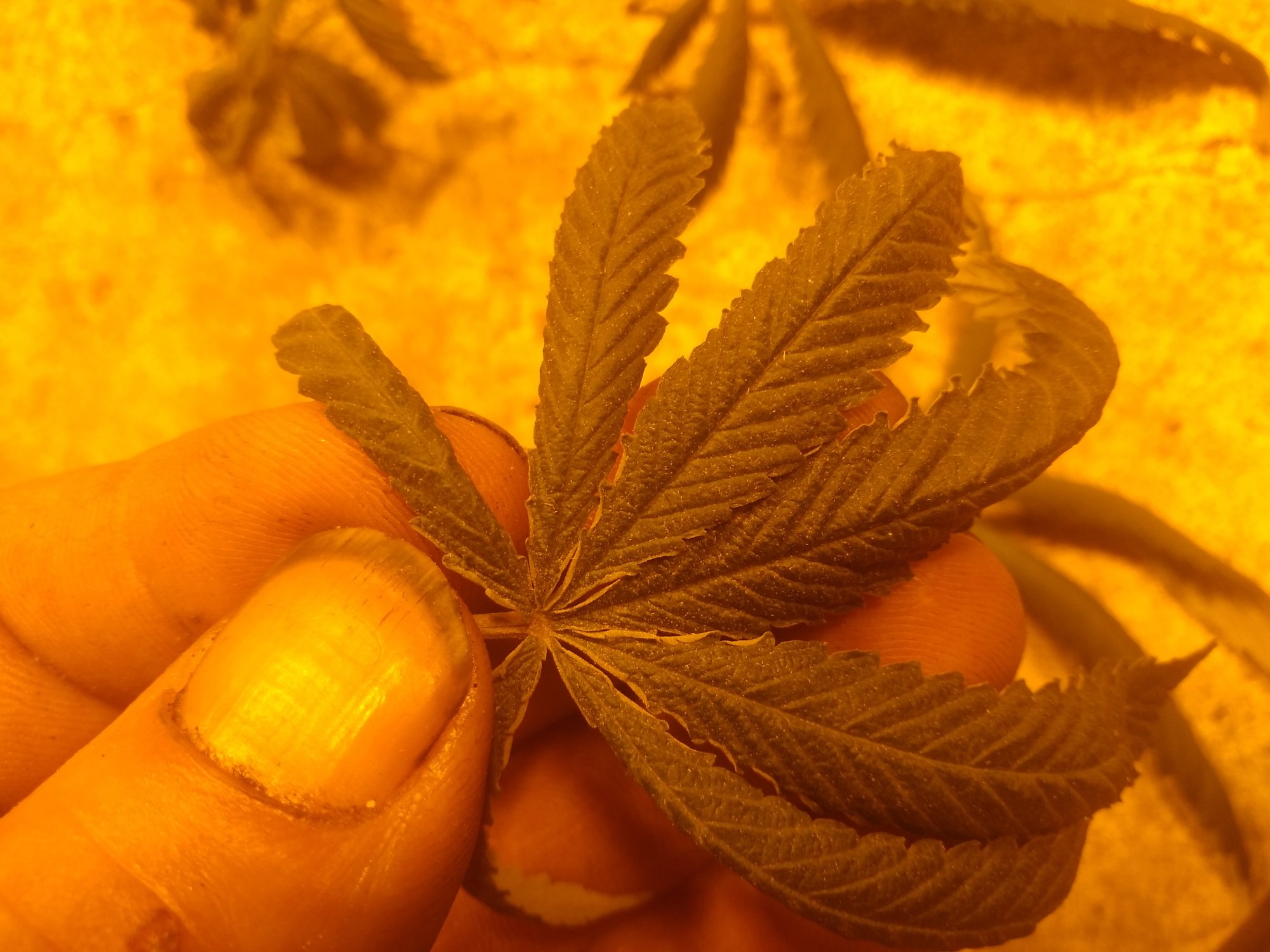 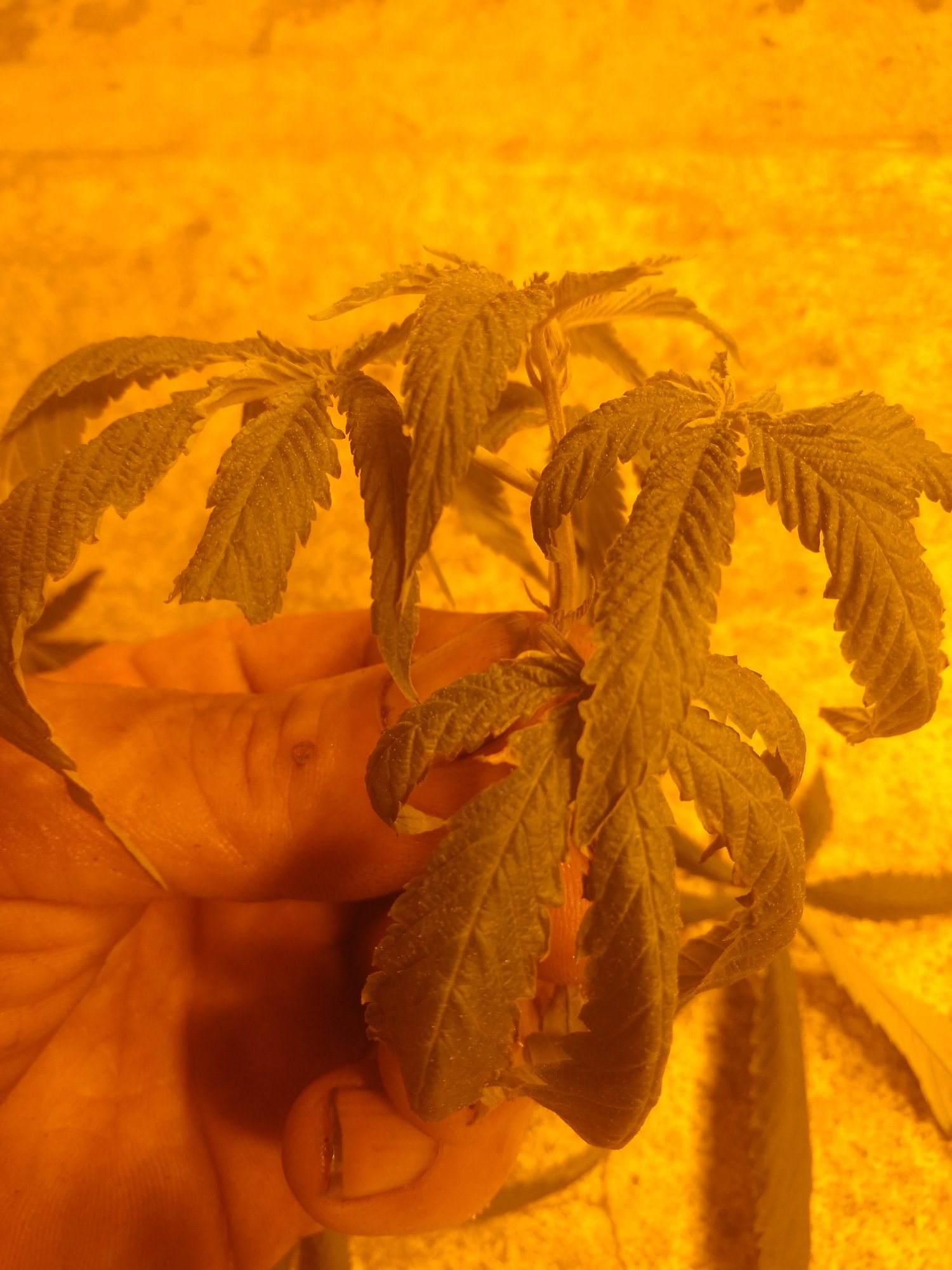 These pics are some worst case examples other than interveinal chlorosis. If I am leafing the petioles snap and squirt water in your eye. I said this somewhere else that I don't need trimmers to prune out most of the inside suckers. I can use my thumb w out making a stringy mess.

I can't ever remember seeing leaves w quite that texture. It's here and there growing tips.

Oh crap. Someone is going to ask about all those tiny white specks I did not notice when I took the pics. Lights come on at 6 pm I'll look closer then

Tracyfri said:
Oh crap. Someone is going to ask about all those tiny white specks I did not notice when I took the pics. Lights come on at 6 pm I'll look closer then
Click to expand...

I'm going to switch my nutes back to the gh flora dou cause I still have some left. I hate to because I want to know what's causing the issue. I feel confident it will go away after being on the gh shit for a week. If it does maybe I can then find out how to avoid in the future regardless of nutes.
Time will tell

I definitely to spend some time in that flower room hanging more trellis, leafing and pruning. It's gotten way out of hand. I was trying to avoid fucking w the plants whatsoever since I figured they were so what stressed. That didn't stop them from growing a ton though. I should have kept up regardless maybe treading a bit lighter than normal. That would have been preferable to doing almost nothing I think.

I would have spent more time training and positioning branches to fill that first net evenly as possible under normal circumstances doing a scrog. Generally my idea is to spread the apical dominance as evenly as possible among all the branches coming up through the net. Since I was avoiding messing around with the plants the canopy won't be as even in uniform as it could have been. This is basically a note to myself to not stick my head in the sand when I have an issue that I can't solve LOL!
I can pick up some of the slack with the second net. Maybe some tying involved as opposed to just tucking. The rest of the trellis net from here on out is five and a half inch mesh as opposed to the 3 1/2"(which makes scrogging a hell of a lot easier) that I started with. I've used three and a half the whole way before and I got to remind myself what a nightmare it was come harvest Time!!

I just plucked a leave and put it under the microscope for the hell of it. I cannot believe what I saw! I should have known but was in denial that thrips could be so incredibly small! This particular leaf was covered w 1st instar thrips. Too many to bother counting. W the naked eye they are about invisible. Just hit the entire room w spinosad. Will repeat every 3rd day at minimum and closely monitor the sitch. Glad I caught it before the bulk of them grew up. I had a few in the beginning but thought I had em under control. I should have sprayed at least every 5 days to 1x per week after that. Then when I was sure they were gone spray Neem 2x a week. It's a constant thing and I know this but was too preoccupied w the IC and nute issues. I don't think they would have exploded otherwise.
If there's a way to fuck it up IM GOING TO FIND IT!

Thats how I know what to do and not do. Sooooo... Message to me, DONT GET COMPLACENT!!!!!
I think I've got the nute thing figured bout too. I'll post when I know in a week or less and take some pics. Farm on!!!

I didn't end up switching my nutes. Cowards way out! I've increased the part A by 35% and the epsom salt 20% and it is doing the trick! Overall I increased the ppm's from 800 to 950-1000. The growth is firming up! New growth a lovely shade of green. I am VERY HAPPY!
I've got a handle on the thrips too. I sprayed 2oz captain Jack's spinosad mixed w 1oz Neem oil that I diluted in hot water before combining it in the atomizer. It is an effective combination for both pests and pm. I'm going to re apply tonight and I will post some pics as well.
Farm on boys and girls

In honor of Oldman13 I changed my Avatar. Yes it's true I am a sniffer

Tracyfri said:
In honor of Oldman13 I changed my Avatar. Yes it's true I am a sniffer

Picked up a few pointers here from the farm 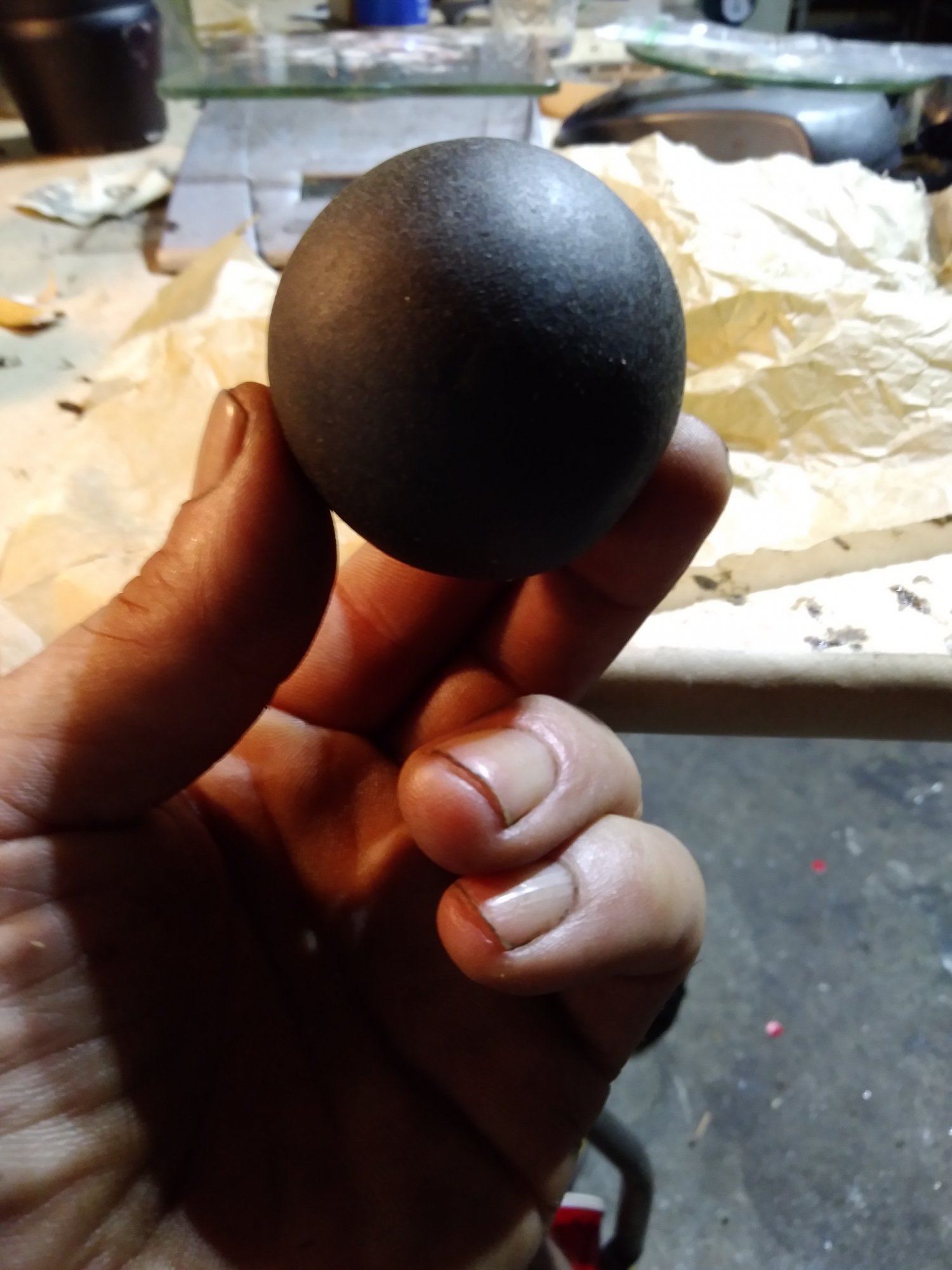 I'm doing a great job keeping this grow log up to date! Call me "Mr. Consistent"!!
I'm getting in here to prune and thin out this jungle tonight so here's a before pic. Yes I know it's REALLY out of hand!! I tend to let things go to the last minute

It's really hard to make out the more mature plants at the end of the row in a separate pic. Just looks like a jungle. I'll clean it all up then do the 3 shots to differenciate between the 3 areas like in the beginning of this grow log. Happy farming!! 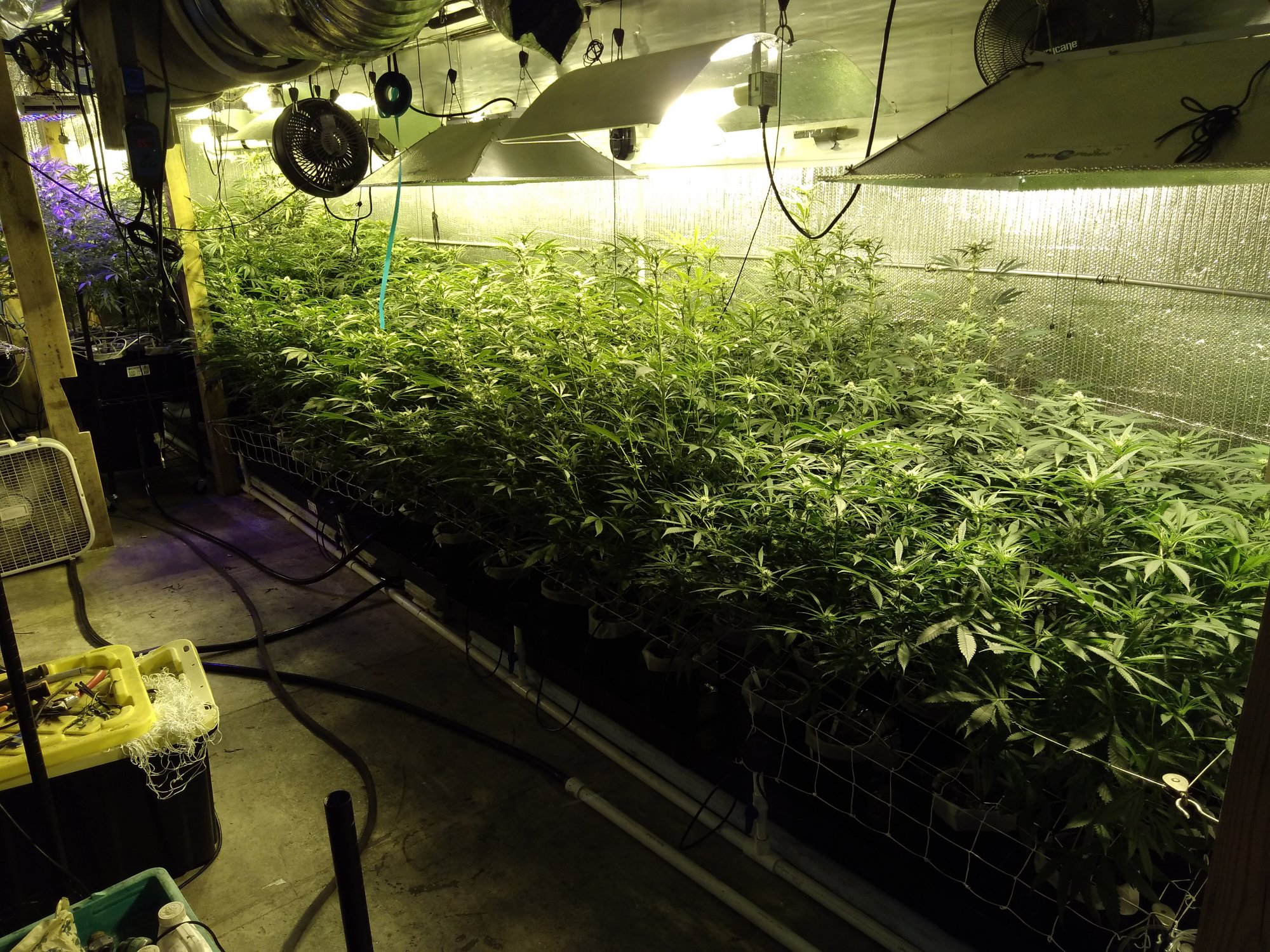 Do I found a shit ton of russet mites. They were causing some of the leaf symptoms but not the def stuff.
I can't believe I missed them the way I did but they are microscopic and I'd had zero prior experience and zero idea of anything about them. Brought em in from a grow in the next state. Positive.
Did a harder more thorough thinning for extra air flow and so when I spray I can cover more of the plant cause they are much less crowded. They have not made it to the tops yet. Still confined to lower portions of which I pruned off mostly. Spraying sulfer and spinosad.

Tracyfri said:
Do I found a shit ton of russet mites. They were causing some of the leaf symptoms but not the def stuff.
I can't believe I missed them the way I did but they are microscopic and I'd had zero prior experience and zero idea of anything about them. Brought em in from a grow in the next state. Positive.
Did a harder more thorough thinning for extra air flow and so when I spray I can cover more of the plant cause they are much less crowded. They have not made it to the tops yet. Still confined to lower portions of which I pruned off mostly. Spraying sulfer and spinosad.
Click to expand...

Ouch man... one thing I have been very fortunate not to deal with is bugs or infections. The day is coming but I will fight it to the end. Forst I need to get a grow going lol

Seeing results so far w both sulfer and spinosad. As of last night looking at a sampling from around the room approximately 50% of mites on the samples I am monitoring haven't moved in hours I am assuming they are dead. More dying each hour I check. The ones hit w sulfer died quicker but many still alive. Multiple applications obviously. Thinking of mixing the sulfer and spinosad together. I can't find any reason so far that I shouldn't.
2 hrs later more are slowing down. If u watch awhile ones you thought were dead still twitch. The spinosad makes them convulse. They curl in and out steadily. I have not observed movement like that in a healthy sample in which they keep their heads kinda down and probe around like little pigs as opposed to mimicking the girl from the exorcism. Hehe

So they shrivel up to almost nothing under 100x. Good news for this fahmah!! Going to hit em w salisylic acid hoping for a response. You would know anything is wrong just quickly scanning and admiring the canopy
You must log in or register to reply here.

My first grow ever. Day 8 Flower