maturesmoker said:
Very nice bushes you have there :blink: They are going to give you a very nice yield. I like the way you have them planted too, I bet they look just like any large shrub from a distance on that land!

Thanks mate. Actually I suppose I could have spaced them more to allow a better sun penetration, but well, I guess I'm quite "mature" myself (OK and lazy) and it was hard enough as it was to prepare the spot on this meadow land. Also this patch is ideal stealth wise, as it is the only real "hidden spot" on my land. Just missing a few hours sun in the morning but well, you can't have everything ;)

Oh well, as you say, at least I could pretend I have only one plant instead of 4 ! :)

A little update :nerd Photo taken 2 days ago. This is just a general pic, I'll post some budshots as soon as they start fattening up.

It's looking good so far anyway, and we have a bright blue sky and 32° or so celsius. If only it could last for another month and a half, that'd be ideal!

ps. notice the tiny Guerilla Gold at the front, between her AK big sisters :giggle 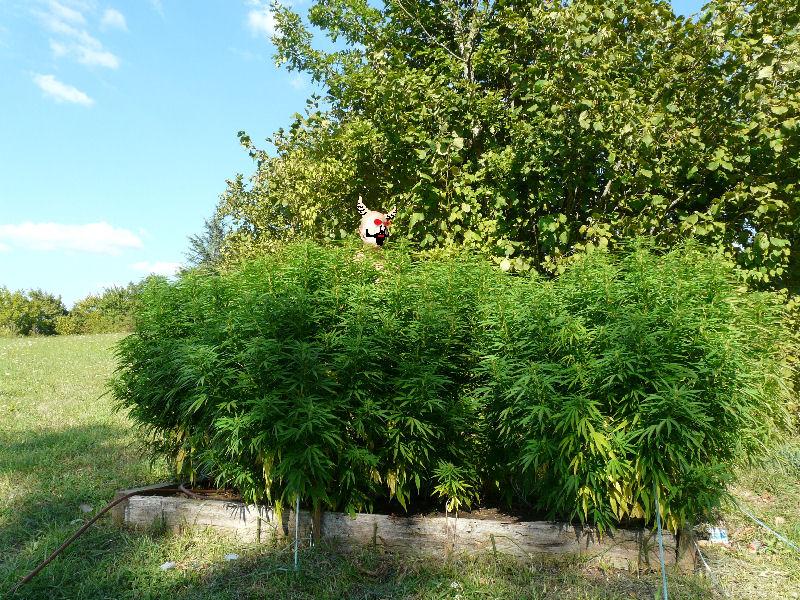 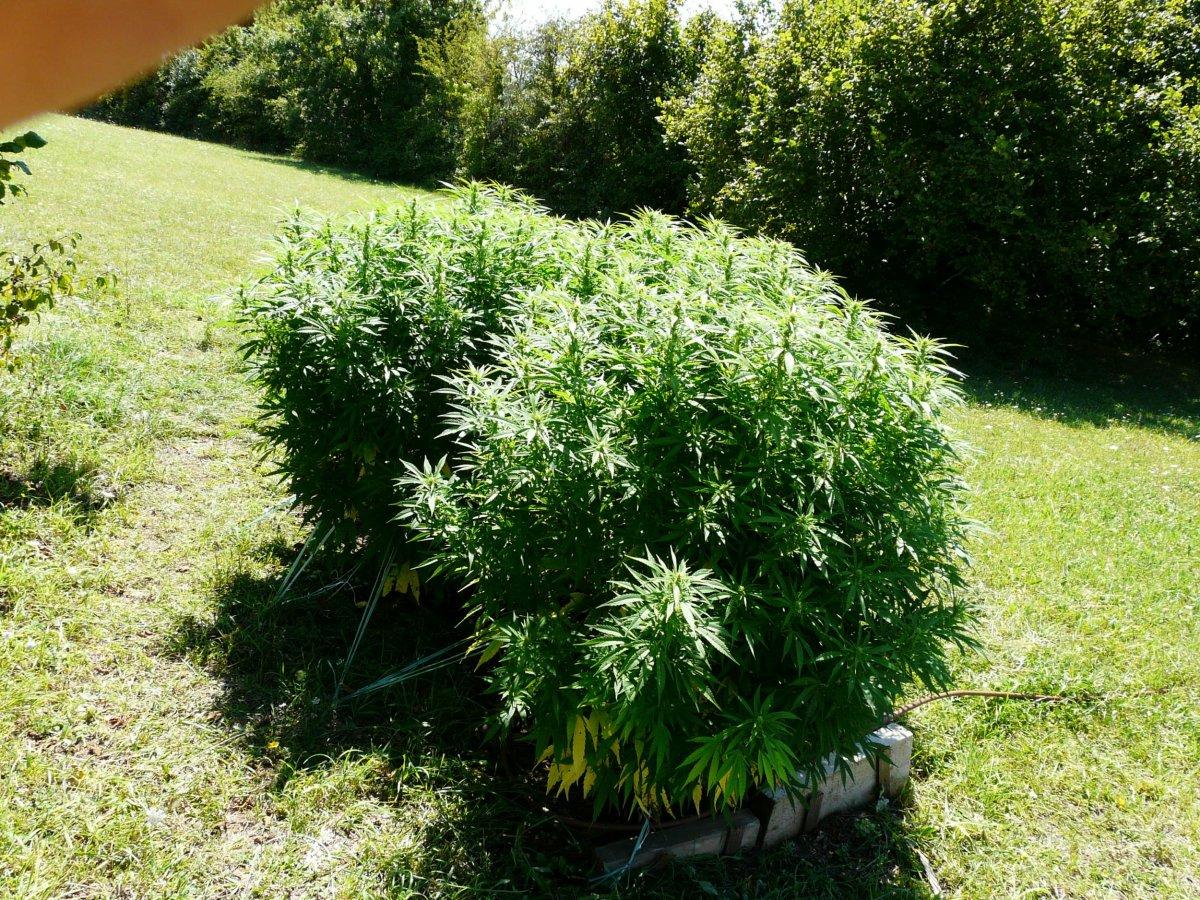 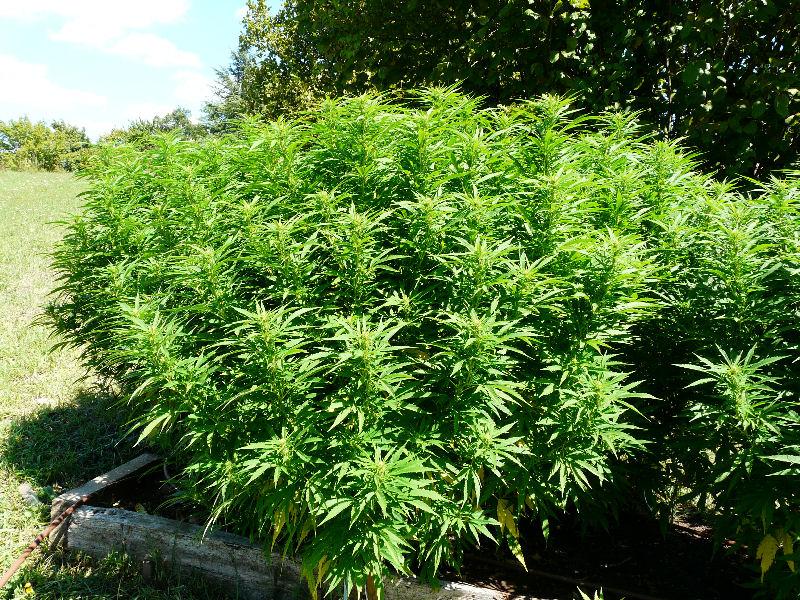 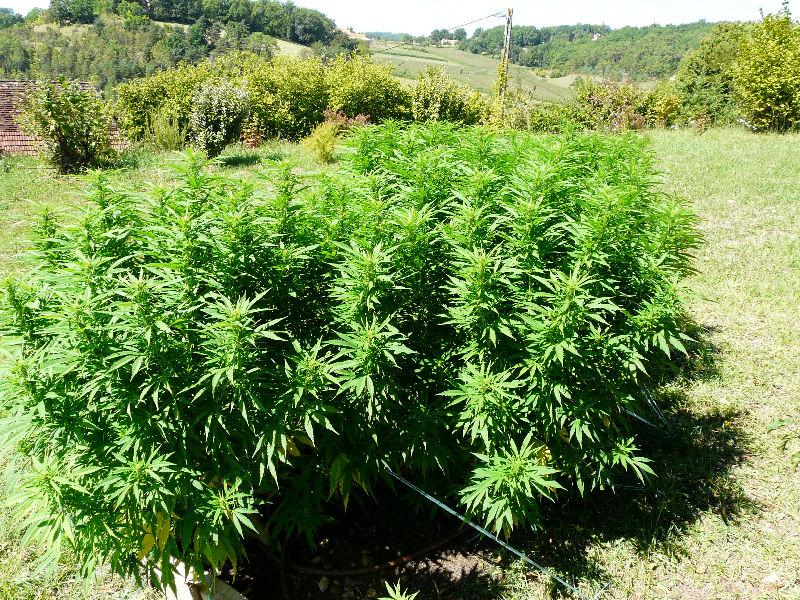 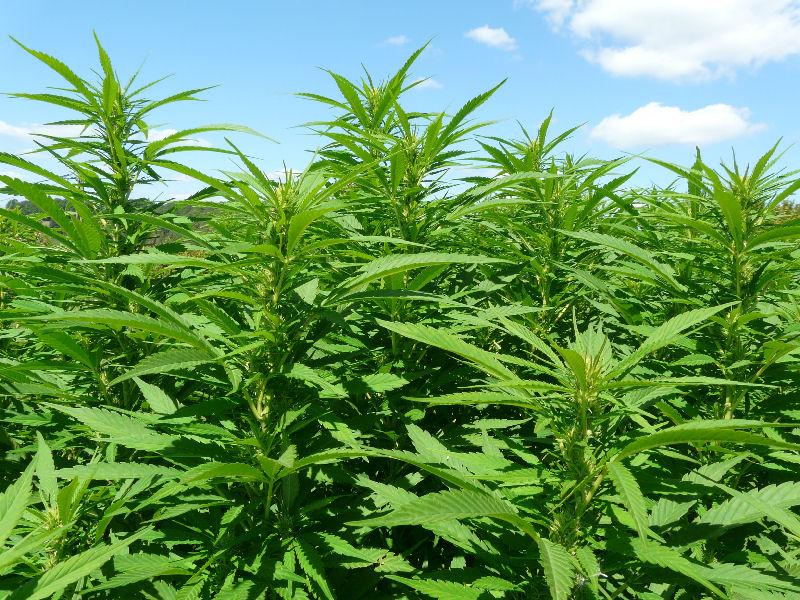 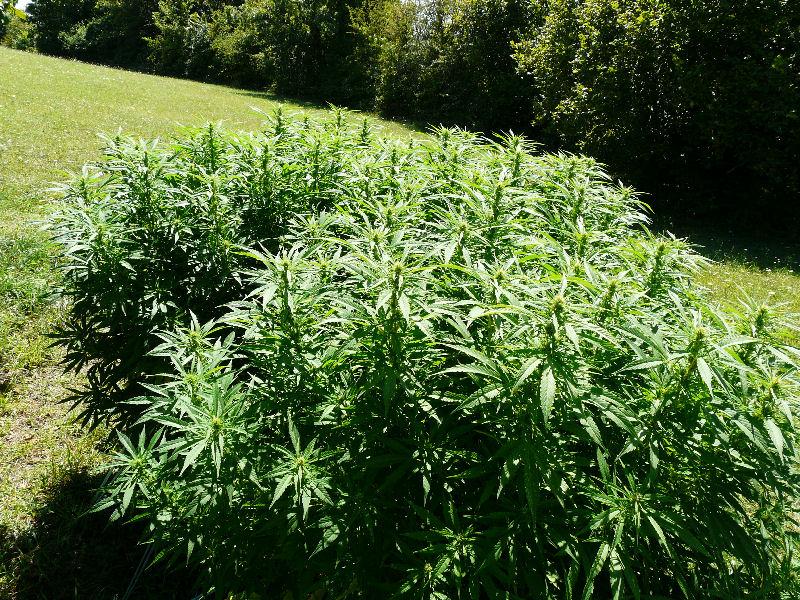 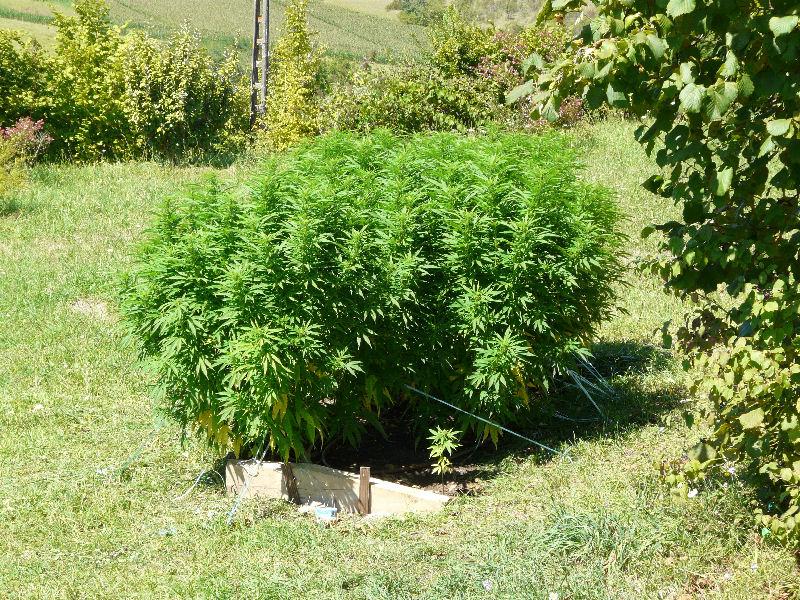 Those look incredible hanuman! I just found out that my (late) outdoor plants were eaten by a rabbit(s). I was, needless to say, very disappointed! I'm glad to see yours doing so well though. Rock on man!
S

Nice work, bet you wish you'd give them more space though ay.

Thanks for the kind comments my friends. I haven't been planting so early in the season for a few years (everything was set by the end of April), usually procrastinating until I finally push myself to plant a few cuts outside in july / august, so obviously, I'm quite excited about the idea of harvesting with a wheelbarrow in a few weeks :dance
The colas are now starting to bud nicely. I'll take a few pics later on today... or tomorrow.. or later :)

As for giving them more space well, I knew from the start that they'd be crowded. True, I thought that I'd get over that with a bit of bending and training, but this AK gets incredibly bushy and branches out like a maniac! I also planted two Guerilla Gold from seed in the same patch and the poor things hardly get any sun! Also, as I said earlier in the same post, I'm not getting younger and it was hard enough as it was to dig-out the patch to this size. The good thing about all this is that, big as they are, they are quite stealthy in the garden, as you don't really see them before almost stepping on them.

I'll post an update soon as they are changing radically (for the best) these days :cool

OK, I'm off to do a "no-rain-dance" :sun as bud rot is my only worry these days.

Getting close to harvest over here. Probably by the middle of the month. Things are starting to look good :)

I built a homemade poly tunnel around the plants to avoid budrot, and up to now, it's been doing its job. 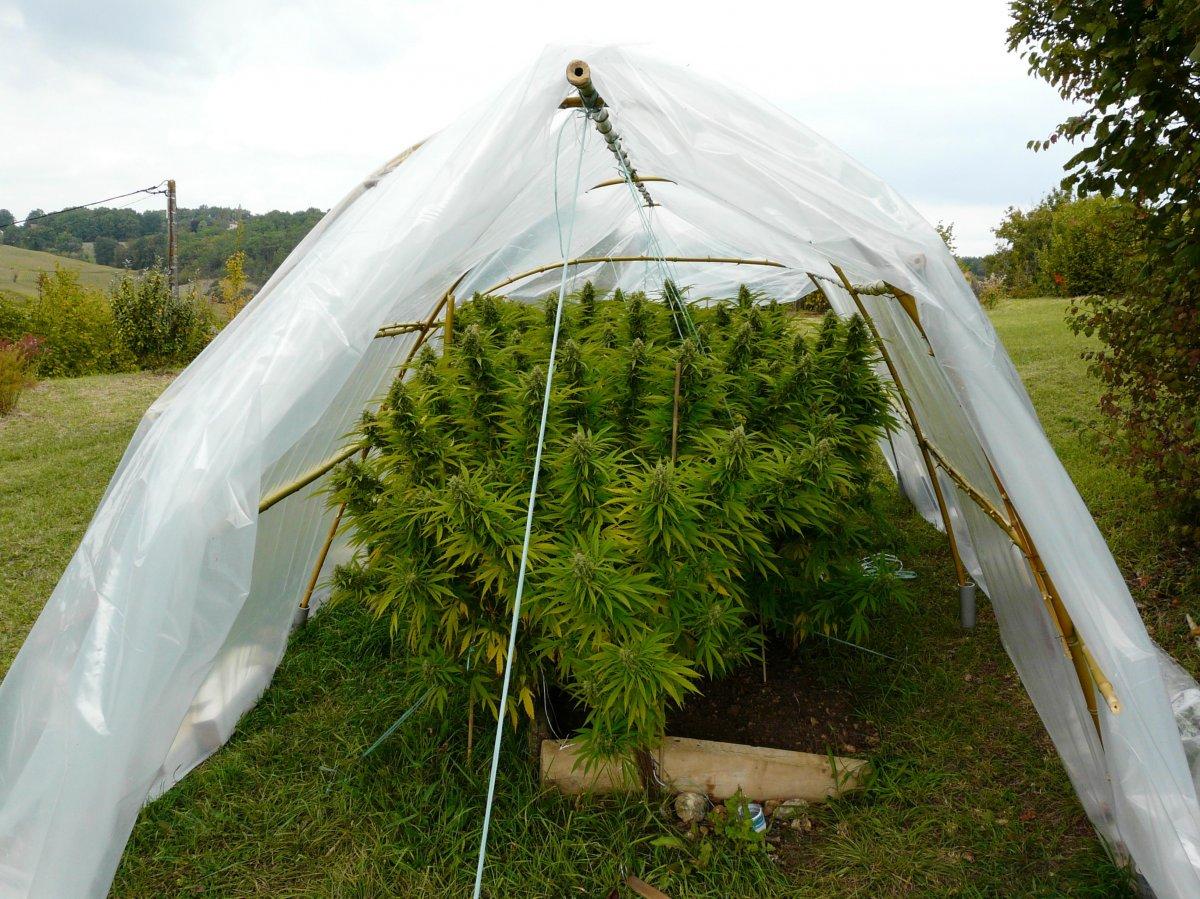 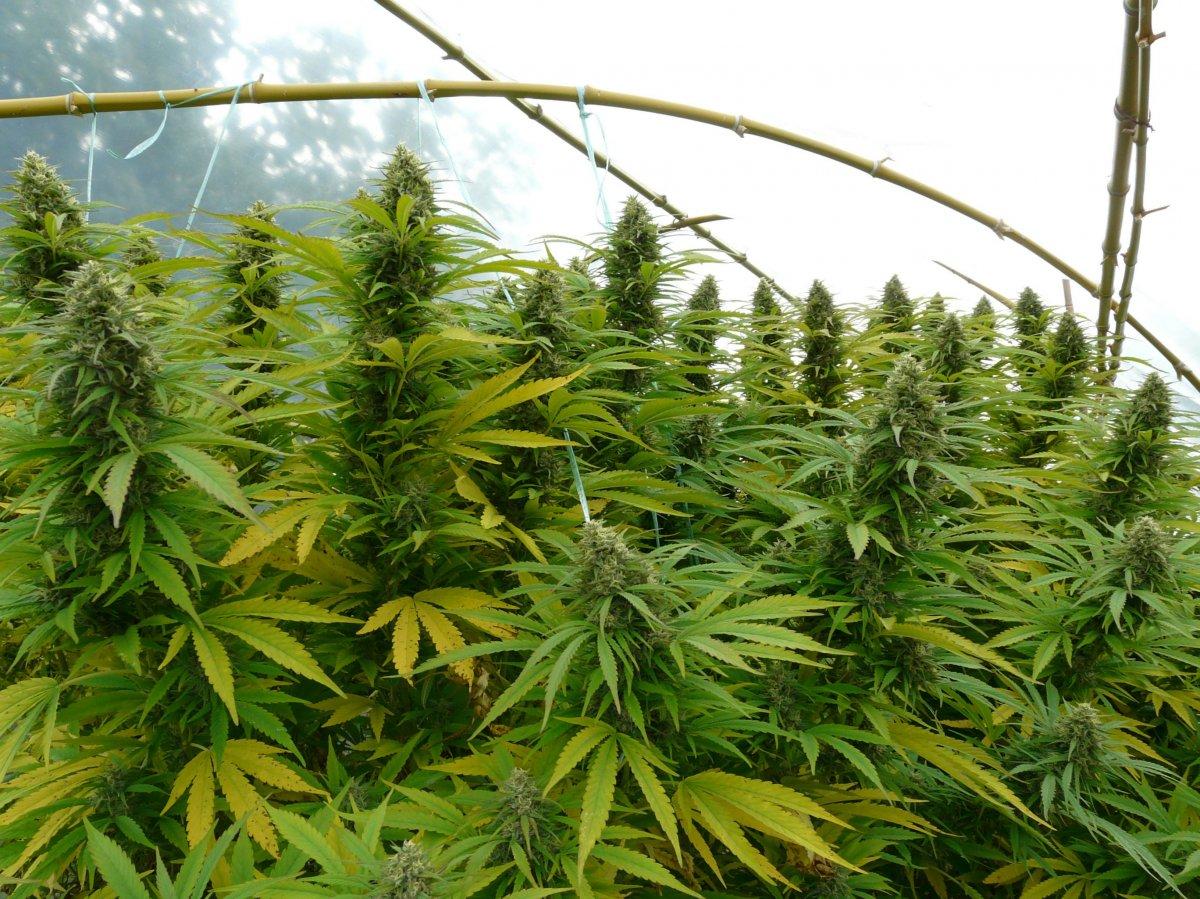 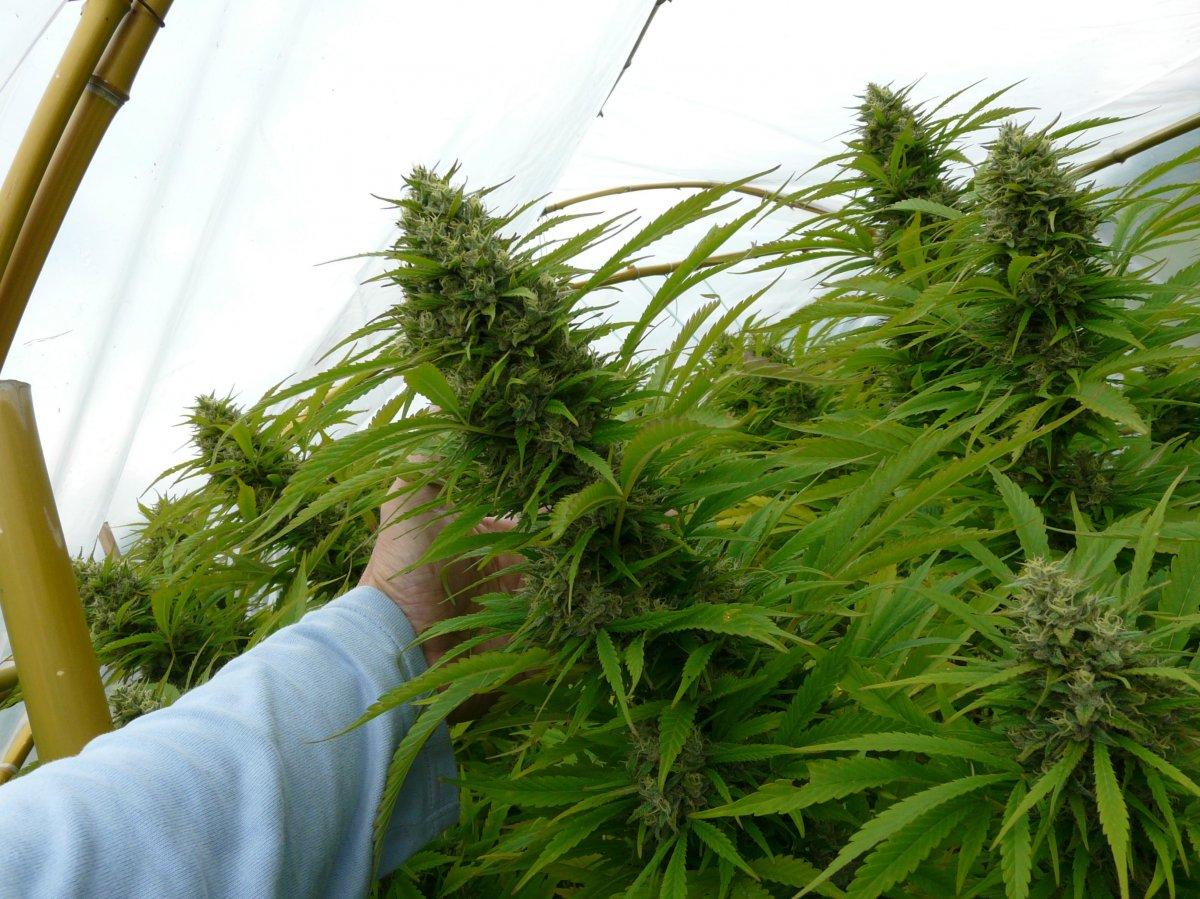 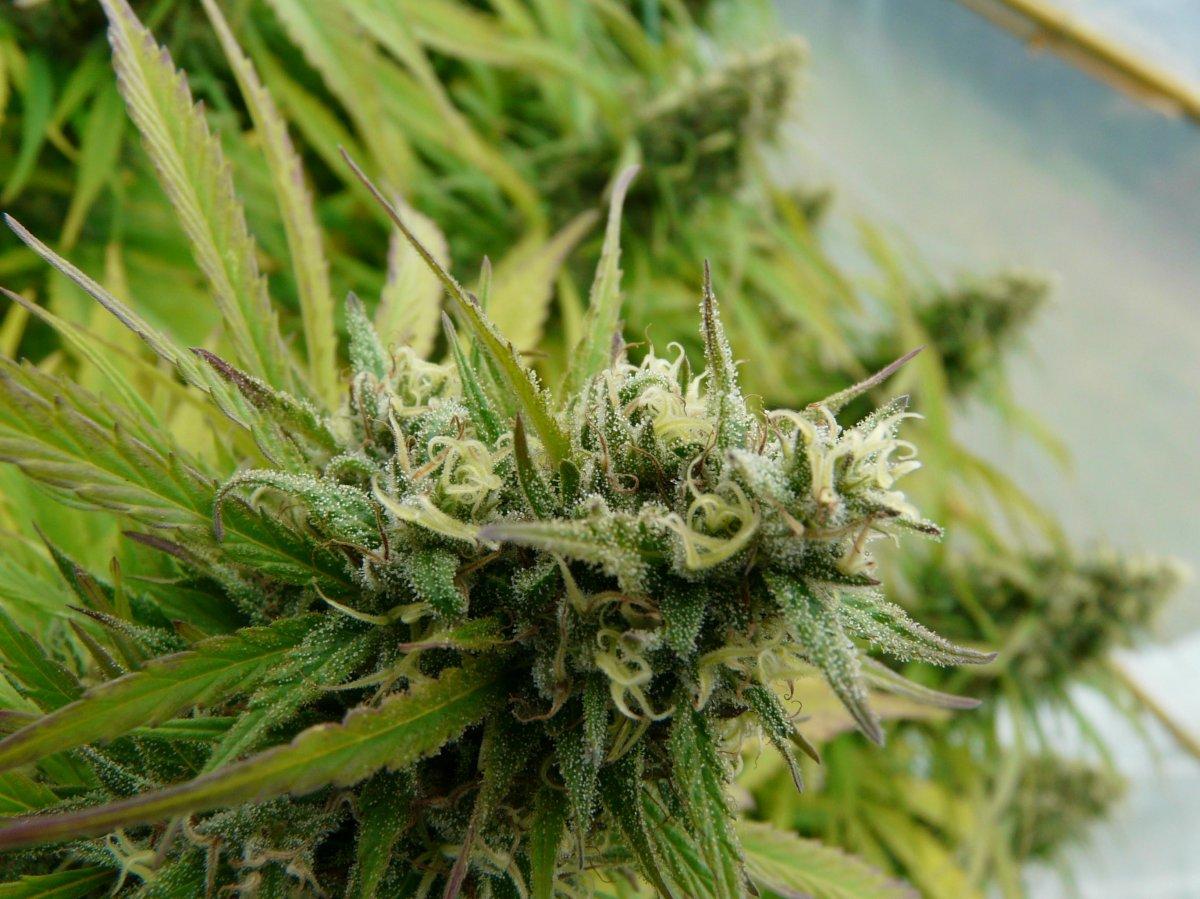 thats going to be one hell of a harvest. maybe 2 weelbarrows are needed! :clapping:clapping
H

Wow hanuman! What a nice garden of bushes! Did you do any training on those or did they stay low and bush out like that naturally?

some prime outdoor nugs right there.
great job and enjoy the smoke.
H

Yeah PGW, I trained the plants. Actually I topped them twice at the beginning & middle of vegging, plus I bent and tied the main top and other bigger branches to keep a low profile and encourage lateral branching. Well it worked as the plants got really bushy and don't really go over 1.60/1.70 m (5 feet something I guess...) If you look at the pics from the beginning of this thread, you can see the ties bonding the plants. 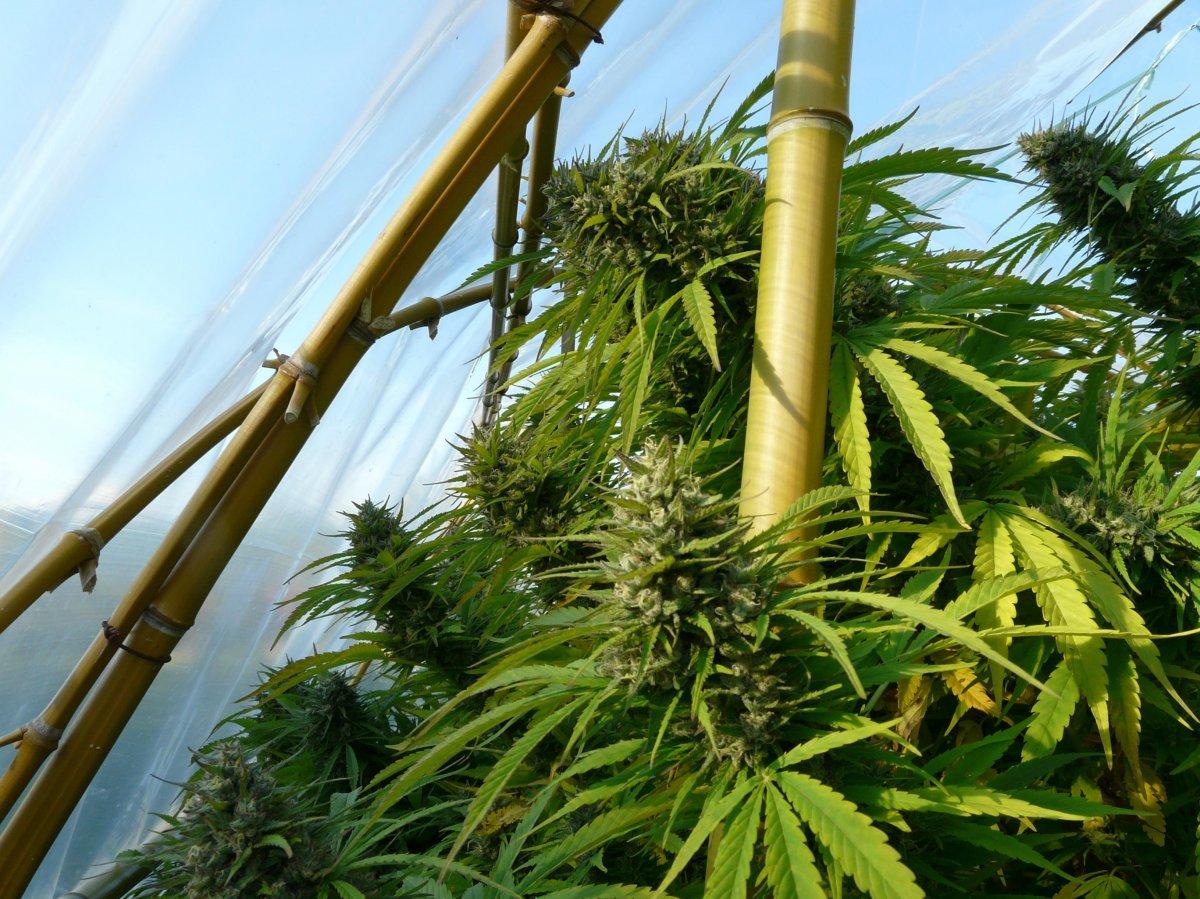 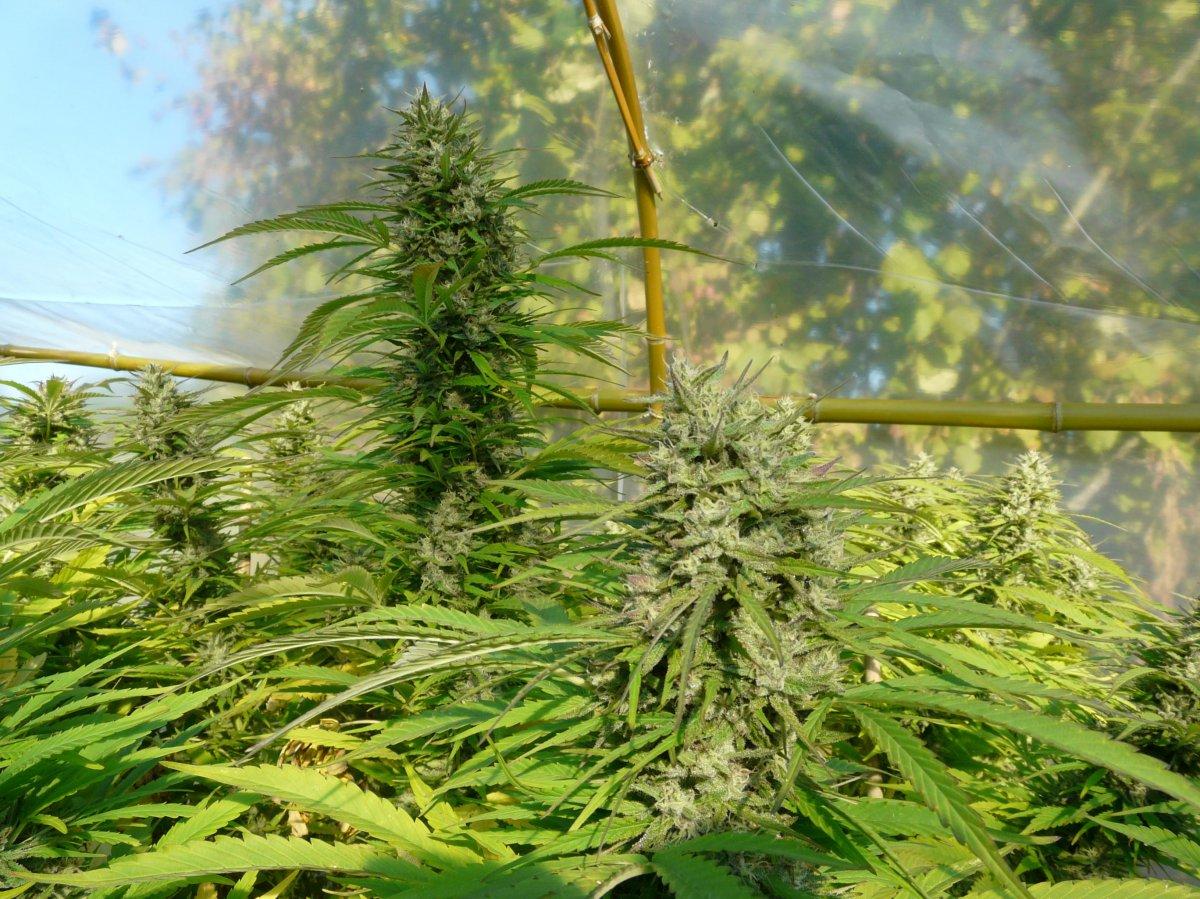 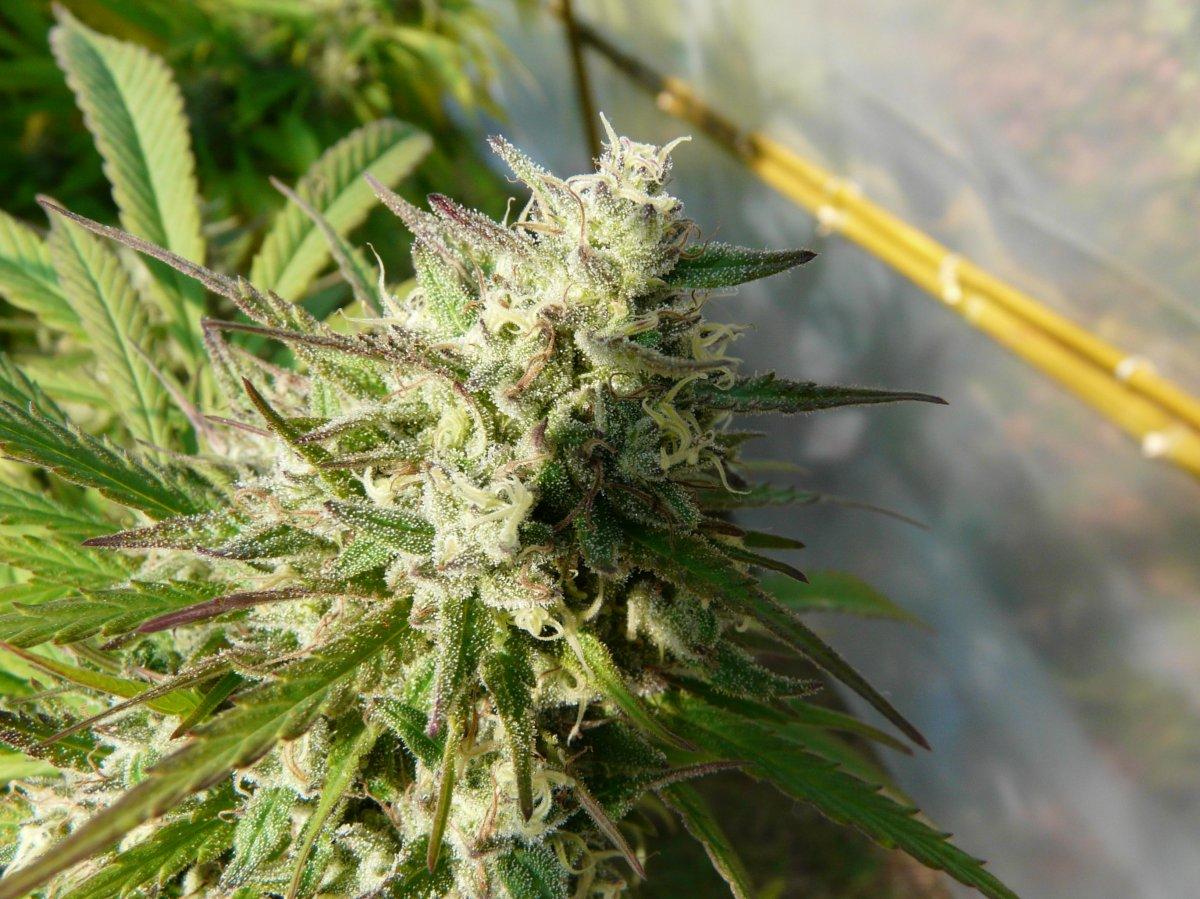 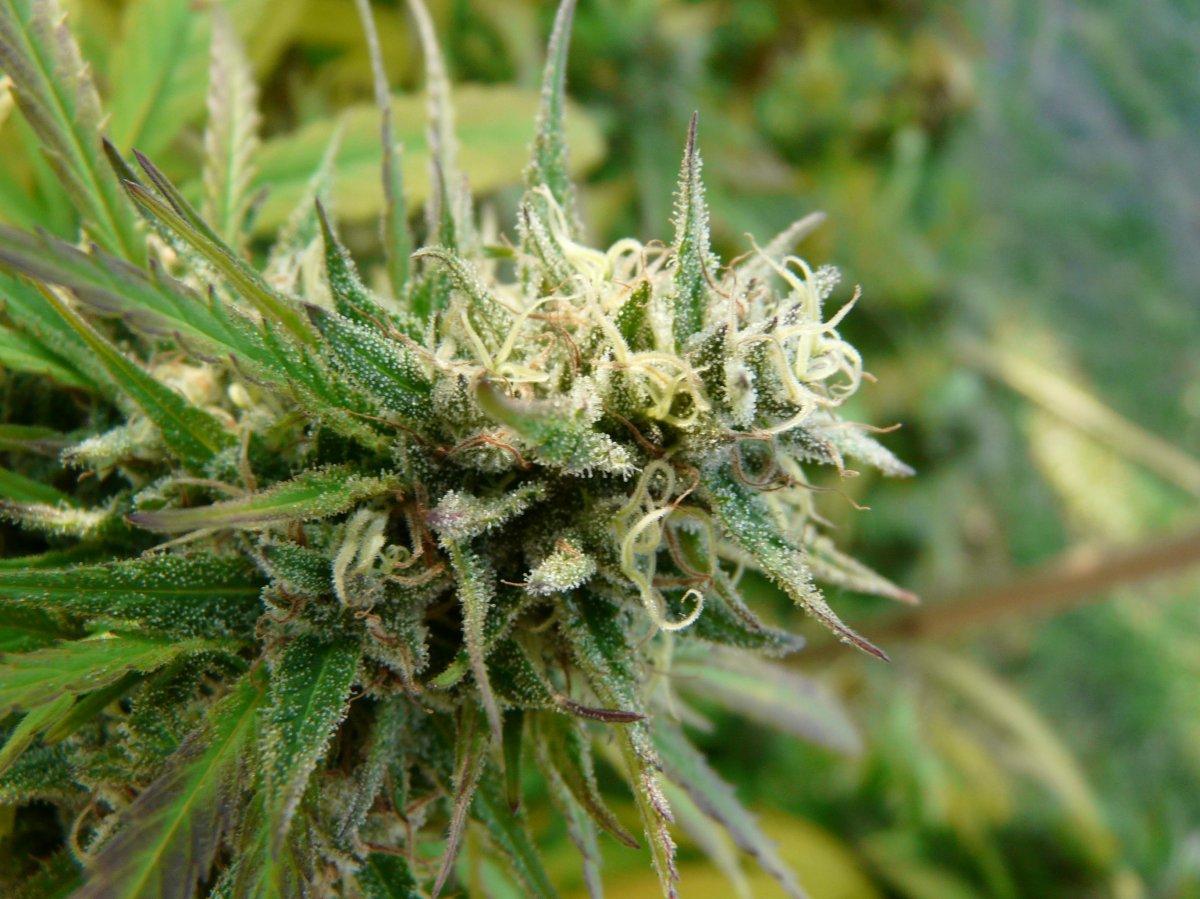 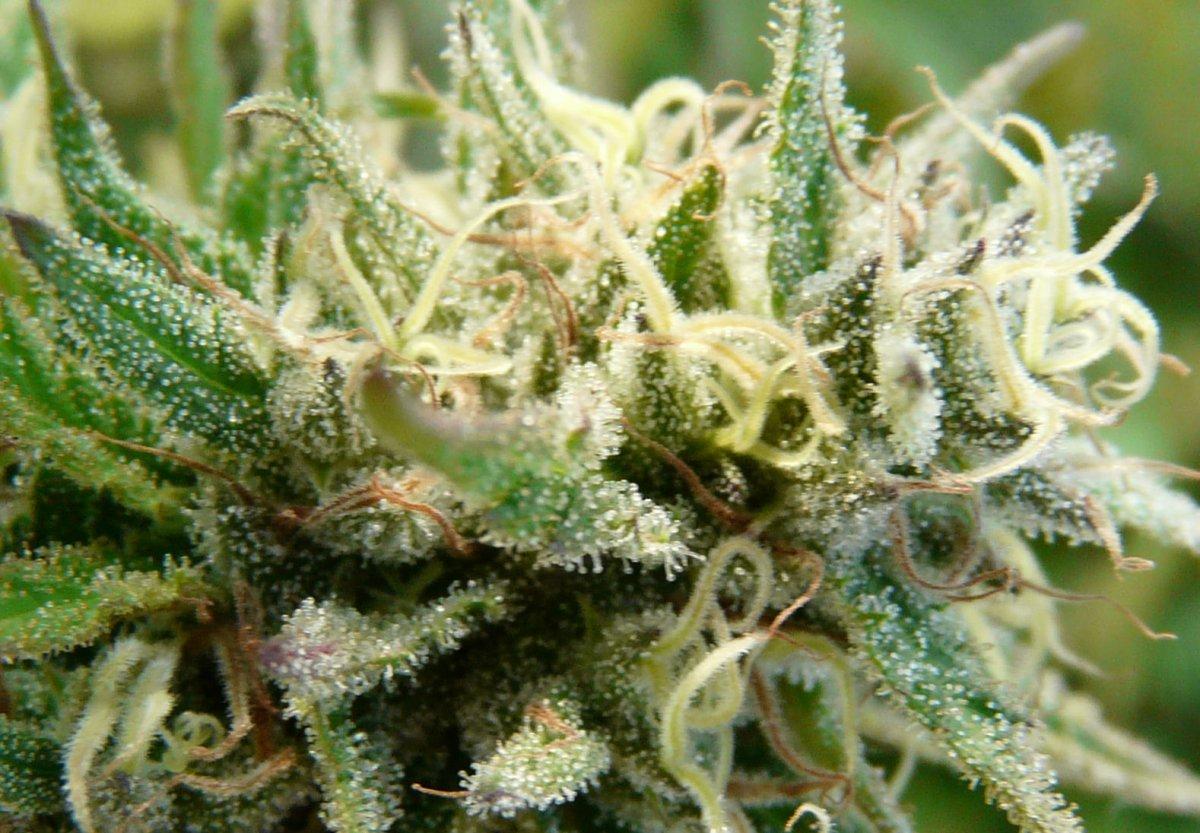 Wow hanuman, your not just messin around!! Those look phenomenal! You should be oh-so-proud.
B