Ok guys, I'm a jack of all trades like the rest of you. But I don't know a hell of alot about ac and ductwork and what not.

So here's the scenario. I want to connect the exhaust of my portable ac with the exhaust of my cool tubes. I know using a "Y" will accomplish this. However what I don't know is whether it will create a vacuum. I plan on having the fan for the cool tubes on a timer with the lights, but will the high cfm from a 6" fan cause a vacuum in the line coming off the portable ac?

I thought about installing a damper on the ac duct before the "Y" but I don't know if that would help with a vacuum situation.

If there is no way around it, I can run the two lines separate. I'm just trying to keep my ninja status and think having two ports coming out of my window would be a bit more eye raising than just the one I have now.

Thanks for any help!

if youve got that kinda room, or you could have the AC exhaust right after the fan

You could install a dampner like you suggested( one way flow only) so you wont be able to push that air the wrong way. Your a/c exhaust will definitely smell like your growroom. Not sure where the input air is from for your cooltubes. 420gator made a great point about a scrubber to clean it up. I cut holes in my room and installed roof jacks and all my air comes out from above.
hiboy
Live long and prosper

I have a scrubber in the room itself so the ac exhaust smells clean. I know a damper will keep things from going two ways, my concern is the high cfm creating a vacuum and drawing more air out from the ac exhaust than the ac is putting out itself. I suppose I can just give it a shot and if it vacuums I will break it down to two lines.

The intake for the cool tubes will be coming from inside of the house, and exhausting out of a window. The window has the exhaust port for my portable ac and I am just attempting to keep it like it is instead of adding another port.

Gotcha
Only thing i dont follow you on is still about the ac smell. It takes air from the room, cools it, blows it in the room and blows it out the back thru the tube. Your room must still smell like weed and thats the air coming out the ducts. No? i know my ac smells. do you have a filter on the output of the ac?
hiboy

I have a big scrubber in my room. I have to get right up on the girls to smell anything.

flip that Y around, have the fan and the AC on the same side and the duct exiting the tubes in the other side

im not 100 percent sure but itd work in my mind:bongsmi:

Put the Y as close to the window outlet as possible.
While there will be a slight venturi like draw through the AC side, it should be much less than the vacuum if you were to place the Y in the room.

Cheers
My life may not be completely about cannabis, however cannabis makes my life complete!

Thanks Convex. That makes sense. I can put the Y right on the exhaust port that attaches to the window.

420Gator said:
flip that Y around, have the fan and the AC on the same side and the duct exiting the tubes in the other side

im not 100 percent sure but itd work in my mind:bongsmi:

if u fuck the AC up some how just go buy an identical one and return that one
Click to expand...

hahhah done the return thing before. works great :lock:
B

Garden of Dreams said:
they sell these dampners that only open 1 way, come in 4" 6" 8" etc, there only about 2" wide, air can only blow 1 way, if it tries to go backwards the flaps close and seal the opening off. Kinda like a full seal auto dampner type thing.
Click to expand...

Would love a link to one of those.

Celtic, I have the exact same setup (I think) that you have.

Then they share the same exhaust (by means of a "Y") - so far, no vacuum issues, but of course that's gonna depend on the size of your fan powering your cooltube and the length of run from your intake hole to your actual AC.

I'll take some pics of my setup today and post them to give you an idea of how they work - have thought of going the electronic damper route, but thinking I might just upgrade my 14K portable to a mini-split sooner rather than later, in which case that'd just be a "waste" of $100 (what they go for).

Bobby Smith said:
Would love a link to one of those.

Celtic, I have the exact same setup (I think) that you have.

Thanks Boston; anyone have any idea what kind of pull that would require to "open" it? Not sure about the 14K portable's fan being strong enough to pull that guy open, especially if my cooltube (which I'm probably gonna throw another 425CFM fan in, for 850CFMs total) is pulling air as well.

Here's those pics I promised from yesterday, Celt. 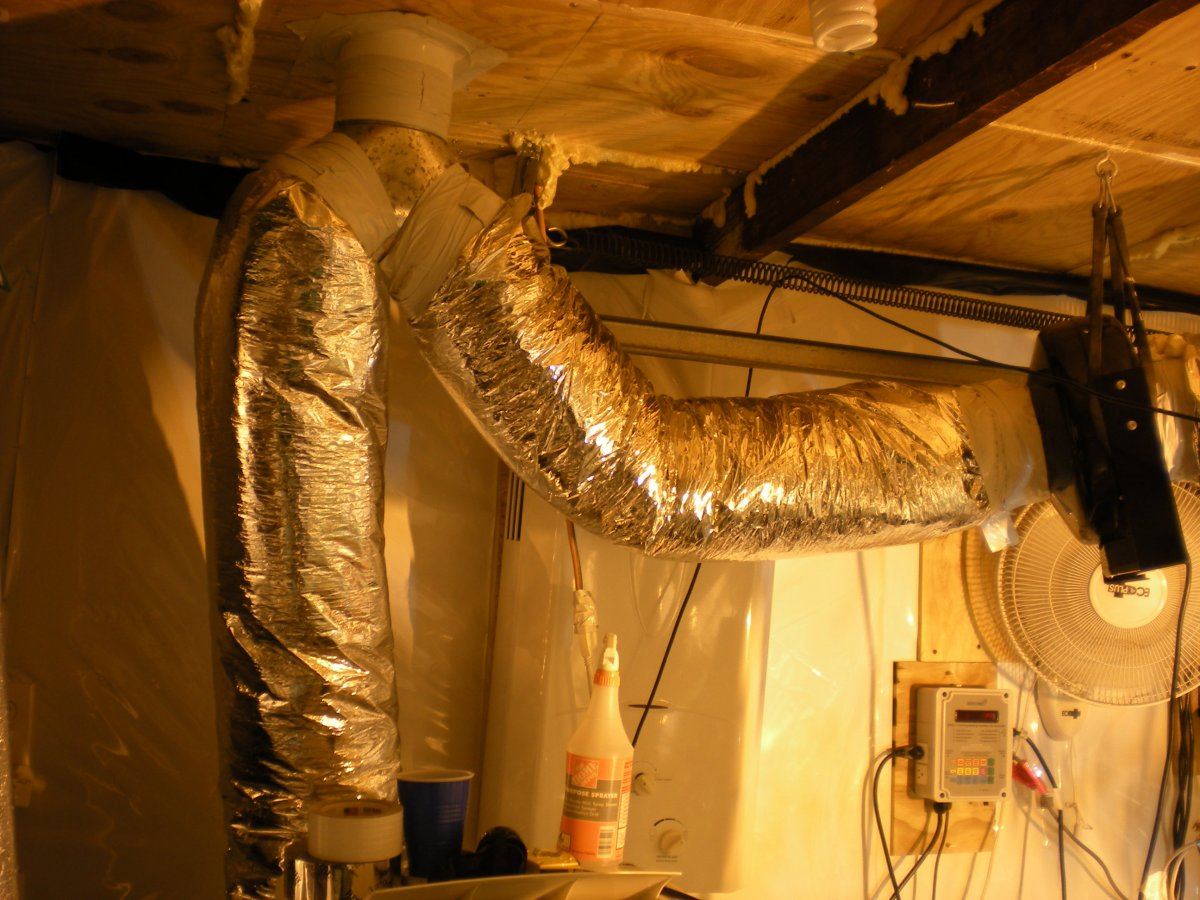 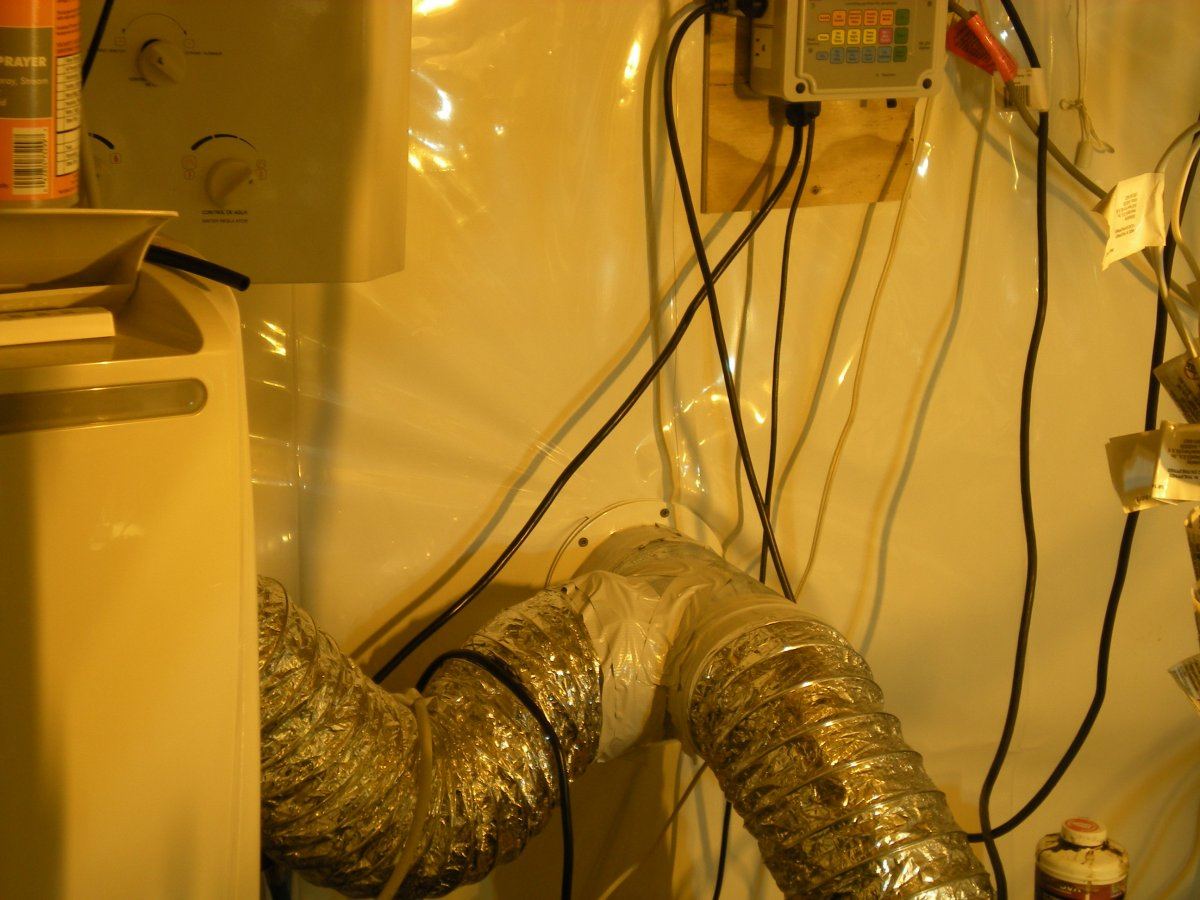 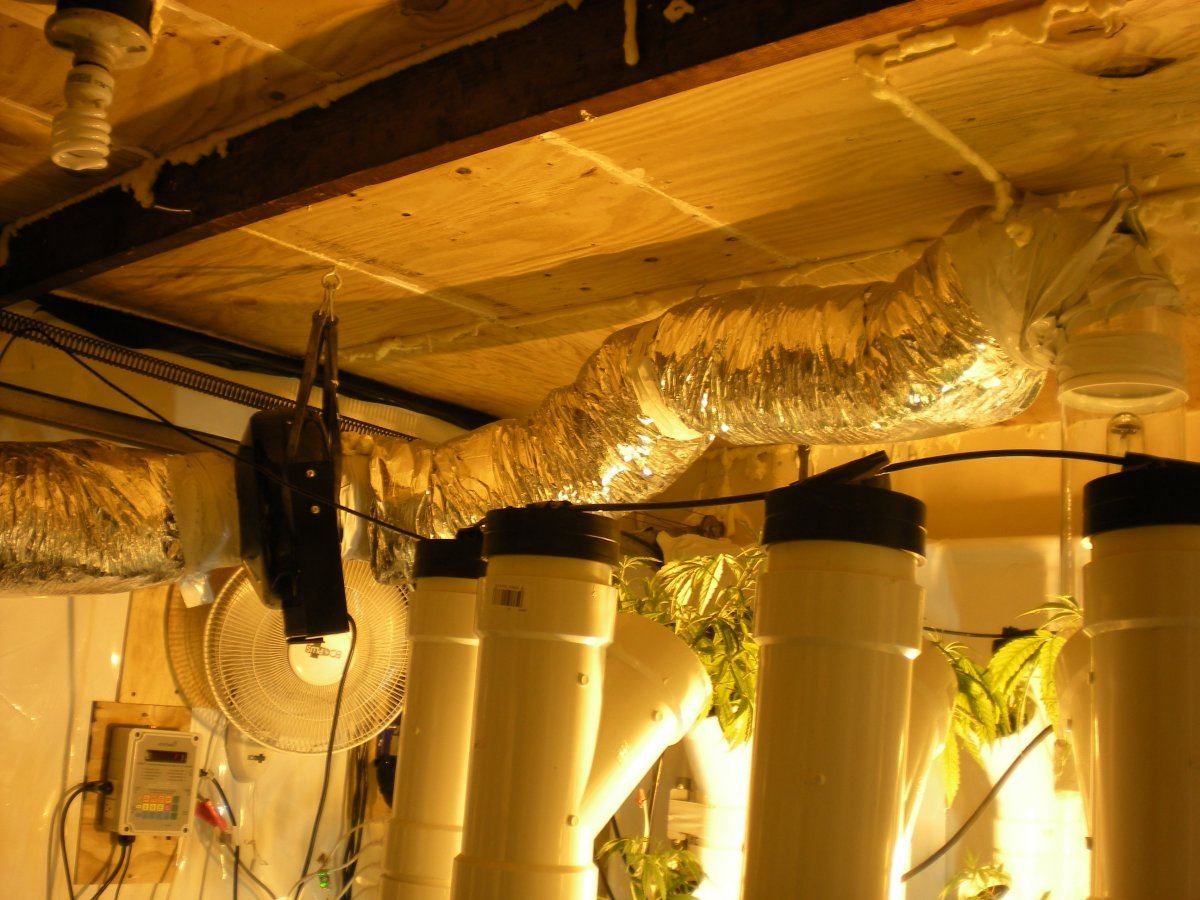 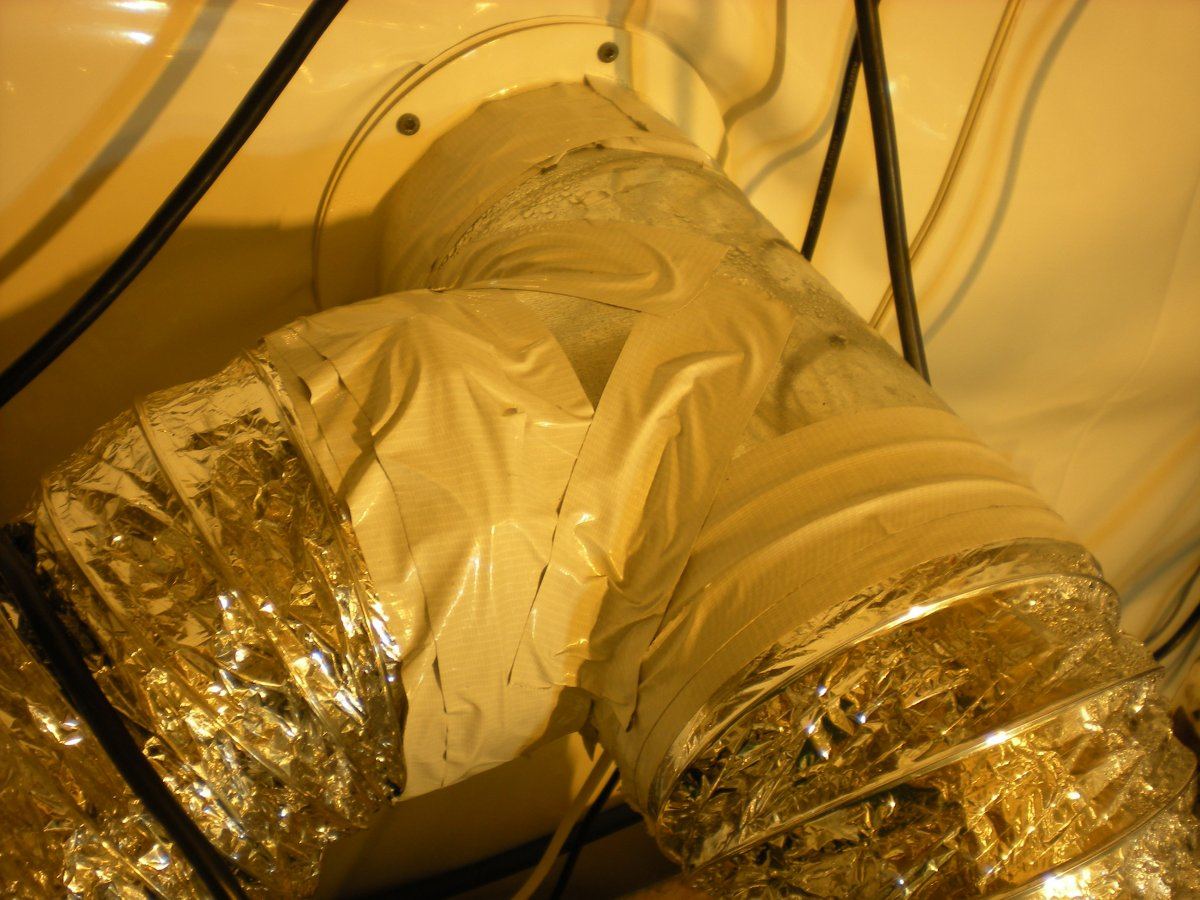 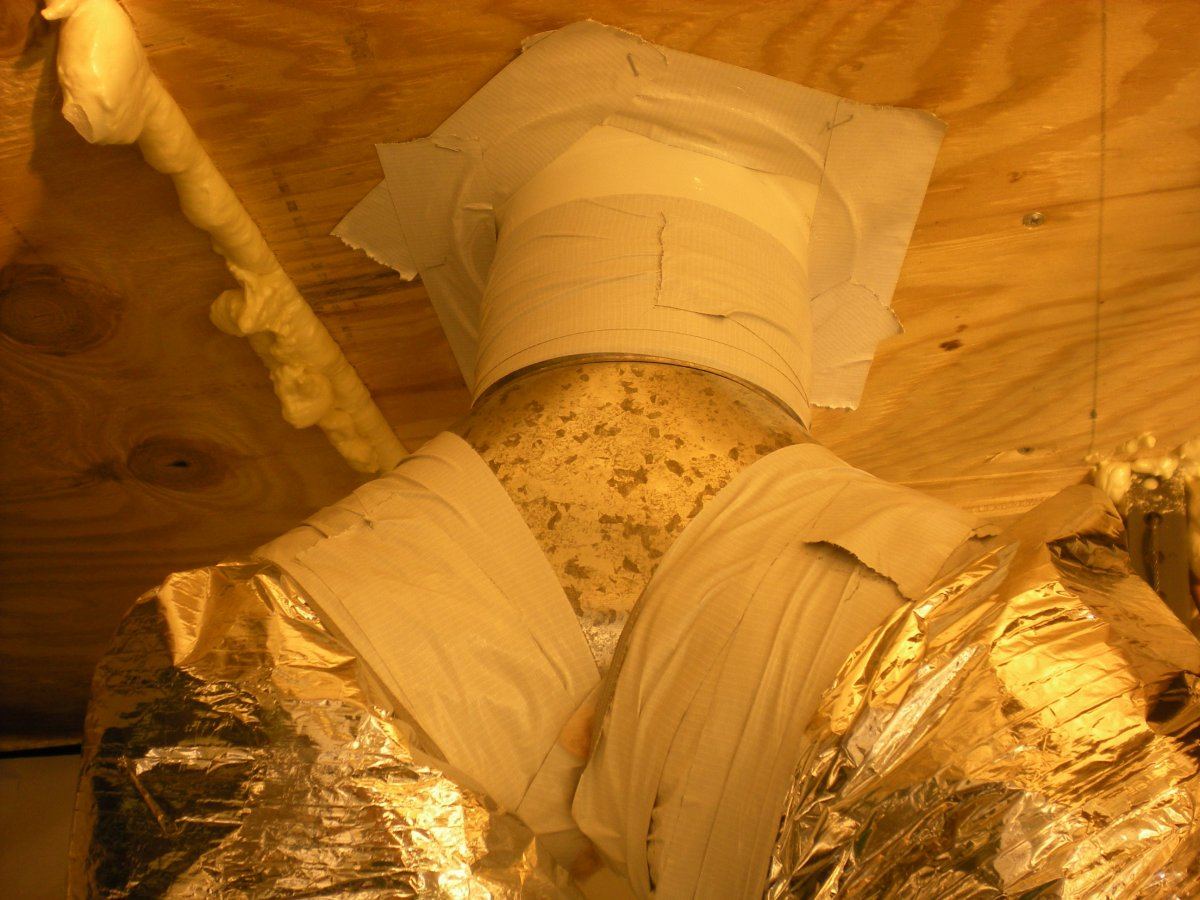 Bobby, By looking at that link for the dampner, you could probably clip off one or two of those springs that you see on the hinges to ease up the tension. Just a thought by looking at it..
hiboy

I think you might find these dampers are designed for push and not pull.
That is, the exhaust of your device pushes the damper open to allow flow.
When the device is not in use, the springs hold the plate closed with enough tension to keep upstram drafts from sucking it open.

Maybe the dampner can be installed so it does just that, (mount it the opposite way) and then it will do the job. A little tweaking might be needed, but with a little construction knowledge you might be able to make it do just what ya need
hiboy
G

Great thread, i am not the only one running this kind of setup.

Mine is a little different and that might be why im running into problems, so any help would be great i want to get back growing already its been to long.

Ok first off i have two rooms veg and flower. In my Veg room i have 400cfm 6" fan pulling hot air (hopefully) out of the room, pushing it through a damper to a ducting line setup with two Ys(kinda) in it that are hooked up to my AC outtake and rooms emergency outtake 495 cfm 6".

All the outtakes went into a 8" charcoal filter in a outtake box i made hooked up to another 5" hole that goes outside.

Yea take a min even confused myself.

I been running into heat problem's even with the new 14000 btu AC portable dual hose.

After a few test runs the AC just keeps overheating and spitting out hot air when its supposed to be in cooling. It start out working great but after around 30 mins you can tell theres a problem either with the ducting or AC or something.

Really sucked but it had to be done so i took apart all the ducting got into my outtake scrubber box and removed the filter from the ducting. Hoping this would help move the air better and there wouldn't be any more heat build ups. Put all the ducting back together again even better then before with thinking of air flow more.

Just did a test run and bla same boat, set the AC at 75 and for awhile it was doing great keep the room under 75 but then it started to creep up and ended up being around 85 before i just shut the AC down since well yea it didn't work.

Taking any ideas this shits getting redonkules