SALEM, Ore. - A standoff in Salem that lasted for several hours and included gunfire lead to a neighborhood evacuation and the discovery of a marijuana growing operation inside an apartment, police said.
Salem police said Erik Torfin, 40, of Salem fired several gunshots near a bus shelter and into the ground while walking to his apartment on Madras St. SE. No one was injured by the gunfire, but witnesses told police they heard more gunshots inside of his apartment as well, so officers evacuated neighboring apartment units and buildings.

Police also ordered SWAT and tactical negotiators to the apartment when they couldn't get in touch with Torfin, leading to a standoff that lasted for more than four hours.
Police eventually fired non-lethal rounds into Torfin's windows and he walked out of the home to surrendered a few moments later.
But police said he began shouting threats at SWAT officers, so they used a tazer to subdue him; while the tazer was being used, police said Torfin fell and hit his head on the pavement below. He was taken to Salem Hospital for treatment.
SWAT officers searched the apartment and said they found a marijuana growing operation and drug paraphernalia, as well as a loaded handgun.
Police said Torfin was facing several charges, including unlawful use of a firearm, criminal mischief, and various drug-related charges.

After a four-hour standoff and the evacuation of 100 people, Salem police arrested a 40-year-old Salem man late Saturday in Southeast Salem.
Salem police arrested Erik C. Torfin, who is reported to have a fired a shotgun several times before holing up inside a residence in Gateway Village Apartments at about 5:30 p.m.
Police brought Torfin into custody using a Taser at 10:57 p.m. When police hit him with the Taser, he fell to the ground and was taken to Salem Hospital for treatment. He remained there as of this morning, Salem police Lt. Dave Okada said. No officers were injured during the arrest.
Upon entering his residence, unit 3069 at 1952 Madras St. SE, police discovered a marijuana growing operation complete with “drug packaging materials, drug scales and 51 marijuana plants in various stages of maturity,” Okada said.
At 5:20 p.m., Salem Police received several reports of a possibly intoxicated man walking down Commercial Street SE firing a handgun — though no one had been reported injured, Okada said. One bus shelter may have been hit by gunfire,

Dozens of Salem police officers, including a SWAT team, surrounded the Gateway Village Apartments at 5:30 p.m. after Torfin entered one of the units and fired a handgun.
Early reports indicated that Torfin walked east on Madras Street and entered the parking area of the sprawling maze of apartment buildings and eventually went inside a unit on the third floor of one of them.
Police and witnesses reported hearing at least two gunshots come from inside the unit that Torfin had entered.
Neighbors were evacuated to nearby apartments and buildings.
After attempts to contact Torfin proved unsuccessful, the Salem Police SWAT and Tactical Negotiations Teams came on scene. For several hours, they sought to communicate with the suspect via telephone, loudspeaker and text messaging, but he did not respond.
At 10:52 pm, SWAT officers shot non-lethal rounds into the Torfin's windows, urging him to talk with negotiators.

At 10:57 p.m., Torfin emerged but did not obey verbal commands and shouted threats at SWAT officers, Okada said. An officer shot a Taser at Torfin at which point, he hit his head and was taken to the hospital.
While negotiating with Torfin, Okada refused to confirm earlier radio dispatches that officers thought Torfin lived in the apartment he was holed up in. Other reports indicated that Torfin was a Navy veteran who had visited a VA hospital Friday night.
At the hospital, he reportedly was described as suicidal, and he had a suicide plan.
Torfin was described as white, in his 20s or early 30s, and 5-feet-11 with a thin build, police said.
Gateway Village manager Curtis Kotter said that Torfin did live in the complex, and that there had been an incident with him a couple of months ago.
"He was just yelling real loud and scaring the neighbors a bit," Kotter said. "The cops came and talked to him, and that was about it."

Witness Zack Rosenblatt, 14, who was among the people evacuated, said that when the incident began Saturday evening, he saw a man walking with a "big handgun" in one hand and a pack of beer in the other.
Resident Pablo Seja also was evacuated.
"I was just sitting in my car, and cops came around with their guns out and they said 'you got to get out of here,'" Seja said.
Seja, 18, described the area as a nice, safe place to live, and he had never seen anything like this happen before.
Devin Doring, 24, lives in the building where the man was holed up. He said he saw the man standing at the top of the stairwell and yelling earlier.
"I went out to get my mail, and I noticed him as I walked by," Doring said. "He made a loud yell, and as he did he started to fall down the stairs, but he caught himself."
Doring said about 45 minutes later he saw police show up with rifles, and he and his wife were evacuated a short time later.
"The shame of it is this is such a high density (populated) area, and everyone is affected," he said.
Okada said evacuated residents found accommodations.
Torfin is charged with three counts of unlawful use of a firearm, unlawful possession of a firearm, first-degree criminal mischief, three counts of recklessly endangering another person, firearm used in the commission of a felony, unlawful possession of marijuana, unlawful delivery of marijuana and unlawful manufacture of marijuana. 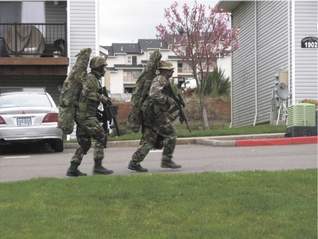 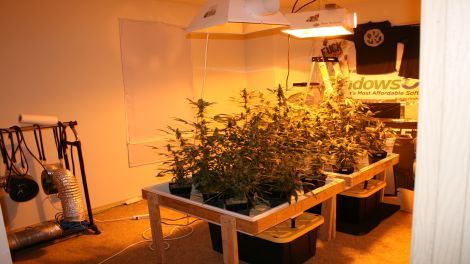 What a shitty grower

Matters being thus perpetually joined together, may have permanence, durance, constancy, and stability. Glory be to God.