In my quest to make smoking a little more healthy I came up with this contraption. I took an ash catcher and filled it with charcoal and put a cotton ball at the end. I connect the entire thing to my bong. With this filter the smoke is extremely smooth and I can take longer puffs. The smoke doesn't really smell like cannabis anymore either. With this filter the water in the bong stays clear for a few weeks(experiment).

I did find out that the 'high' is very different between just a bong and the new triple filter. I'm not sure what is going on but somehow I get higher with the same amount of cannabis. As an experiment I tried some cheap cannabis that makes me extremely paranoid. Now when I smoke the cheap cannabis in the filter, not only am I not paranoid but the high is also better.

I can now change the 'high' for each strain based on the use of the filter. i wonder if this can be examined and explained. there is the consideration that it is a placebo effect. wonder if there is a way to analyze it? sounds great that it works for you!! im a cig smoker, weed doesnt bother me, i actually like the taste! lol
We are all searching for someone whose demons play well with ours.

lvstealth said:
i wonder if this can be examined and explained. there is the consideration that it is a placebo effect. wonder if there is a way to analyze it? sounds great that it works for you!! im a cig smoker, weed doesnt bother me, i actually like the taste! lol
Click to expand...

I wonder if some CBD is getting absorbed but not the THC? The reduced CBD would change the high. I also like the taste but I wanted a way to remove most of the tar and ash from the smoke.


mk23tas said:
...somehow I get higher with the same amount of cannabis.
Click to expand...

Although input dosing appears unchanged it should be no surprize when extensive filtration + cooling manage to capture more of a stream, hence tainting the output path at a reduced rate simply because more sticky residues stayed inside - which explains how its "clean" look will last longer IMO.


mk23tas said:
I can now change the 'high' for each strain based on the use of the filter.
Click to expand...

lvstealth said:
...wonder if this can be examined and explained.
Click to expand... 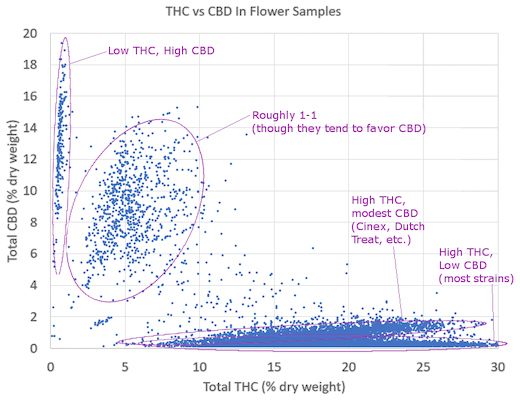 Predicting Cannabis Strain Effects From THC and CBD Levels (2017-mar-23)​
Observe cluster distribution vs specific densities, does this suggest a naturally-occuring phenomenon to anyone??

Intuition alone tells me there's a limit to a flower's noble molecules production, highlighted in yellow; with obvious voids between each group: 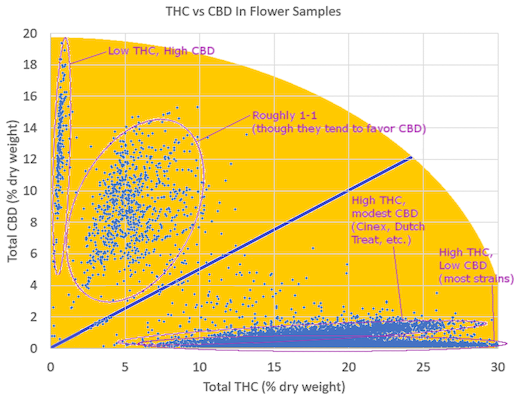 My interpretation of it would be that the pair of dense horizontal genetic selections in blue just reflect successive periods of human intervention centered on the perceptible effects of THC concentration levels. e.g. far from the straight blue line, while fainter 1:1 and High CBD groups correspond to prohibitionism trying to impose a non-psychoactive "medical"/"therapeutic" substitute and that's exactly why i claim present day markets ("legal" or otherwise...) continue to revolve around extreme boundaries, because of a clash between "stoner$"/"droÿé$" who much prefer THC vs $elf-$erving bigot$ (+ a category of medicated people) who do not.

As i recall SQdC's web site likes to advertize 1:1 as "balanced" although such mari-caca feels most inapropriate to me in "recreative" terms already, with Full-CBD clearly restricted to long-term applications no longer including "buzz" effects. In any case such map hardly reflects the long patient work of dame Nature at all.

It turns out in recent decades cannabis consumers became aware that THC and CBD mutually potentiate each other, briefly put it's OKay to get a little fair bit of CBD, presumably around/below the 2:1 mark exposed previously, for example: 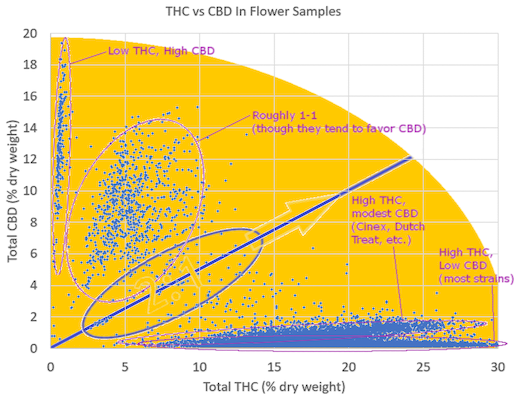 It's a relative void and yet not absolute, in other words there's plenty of development awaiting within the genetic encoding capability of cannabis plants (in the yellow zone) which doesn't actually belong to any extreme boundaries anymore. My personal opinion is that both camps kept it that way for too long and it's time to explore/access different cannabinoïd profiles; so, perhaps what you've been enjoying is some form of altered spectrum conveniently performed via filtration + cooling indeed.

Please consider that rudimentary dosing has allowed you to avoid some of the typical tolerance issues often promoted by imperfect consumption methods since the day of initiation to cannabis... One potential problem being that less control over cannabinoïds dosing & spectrum eventually leads to an increase of behaviour disorder and of course the bigots love to accumulate extremist (THC-centric vs Full/1:1 CBD) statistics also contaminated with decades of that...

In conclusion this may have put you on a liberating path even if destruction of precious goodies by fire (combined to contamination!) translates as self-vilification quite certainly still pleasing our common enemies. YMMV, as an ex-smoker i finally chose "The shortest Path of Lesser Transformation".

Think of condensation rates since THC and CBD have different characteristic temperature responses...

Ive used filters..it does cut down tar etc.youd think youd get less stoned but seemed it was smooth you can take a bigger hit..

The thought of carbon did cross my mind as well but i couldn't decide/assume if the filtration process fails or not judging from the OP alone.

Tonight on cable TV, via the science channel or some Nova program i think, the audience was told about "Water Desalination":


[ https:// www.youtube.com/watch?v=mZ7bgkFgqJQ ]​
How Seawater Desalination Works (2013-May-1)​
The explanation made me want to see more so i found other videos to feed imaginations, for example:

​
[ https:// www.youtube.com/watch?v=TAonH2PFJc0 ]​
How Its Made - 718 Desalinated Water (2015-Mar-30)​
​
[ https:// www.youtube.com/watch?v=HvmLyJ1Cw88 ]​
Turn Salt Water Into FRESH! (Solar Cooled Desalinator) {2019-Aug-23}​
Graphic representation may prove useful in assisting visualization(s). Which in my own personal case promptly reminded me of post-vaporization re-heating as in the Sublimator by Enrico Bouchard, who once claimed that this caused microscopic dropplets to shrink further in size, this later feature rendering inhalation even more pleasant, apparently.


Madmax said:
You'd think you'd get less stoned but seemed it was smooth you can take a bigger hit.
Click to expand...

M'yeah, that's a familiar feeling here too, but mine goes back to 2012. Meanwhile i also understood that efficient consumption methods imply less vilification which manifests itself under multiple forms. In the "Legal" arena "more with less" means a reduction of revenues for self-serving predatory mis-guided 3rd-parties, so if one is fighting my enemy then this guy is my cousin, if not an ally; eventually another son of mother nature anyway... And of course any additional blow given to the dragon through vilification reduction shall feel to me as a little victory over our common oppressors.

That is why ultimately i believe post-vape heat-shrinkig schemes followed by proper separated filtration + cooling got to be further explored, with an eye on all potential nuisances until safety and perfection are finally at hand!

I'd compare vape-bong as dentures vs dental implants. I'd like to see more R&D into bongs, but I'm old. Just got a "King's Pipe 10" bong to try as the blower died recently from flu and I haven't had a bong in 20 + years, rollin on,Lol.


SSgrower said:
I'd compare vape-bong as dentures vs dental implants.
Click to expand...

Compared to what? Chronic self-poisoning by combustion, initially fueled by wood fiber & glue while destroying half the noble molecules just to maintain fire alive so more precious goodies are wasted between 2 tokes??

Does "R&D" include a solution to clogged screens and reclaims? Precision energy "packetization" to implement Micro-Dosing, etc.?? Despite years of serious involvement i still have to read any feedback on my Near-Symetrical LAVACapsule which addressed all 3 aspects and more, starting with skinburn-wise safety, all in vain to say the least. But i've planted the few seeds i had to contribute, the rest ain't on me alone as it takes 2 to tango!

The only way I can keep my new bong clean is to scrape and soak in alcohol 70% for an hr. or so. Cheers. 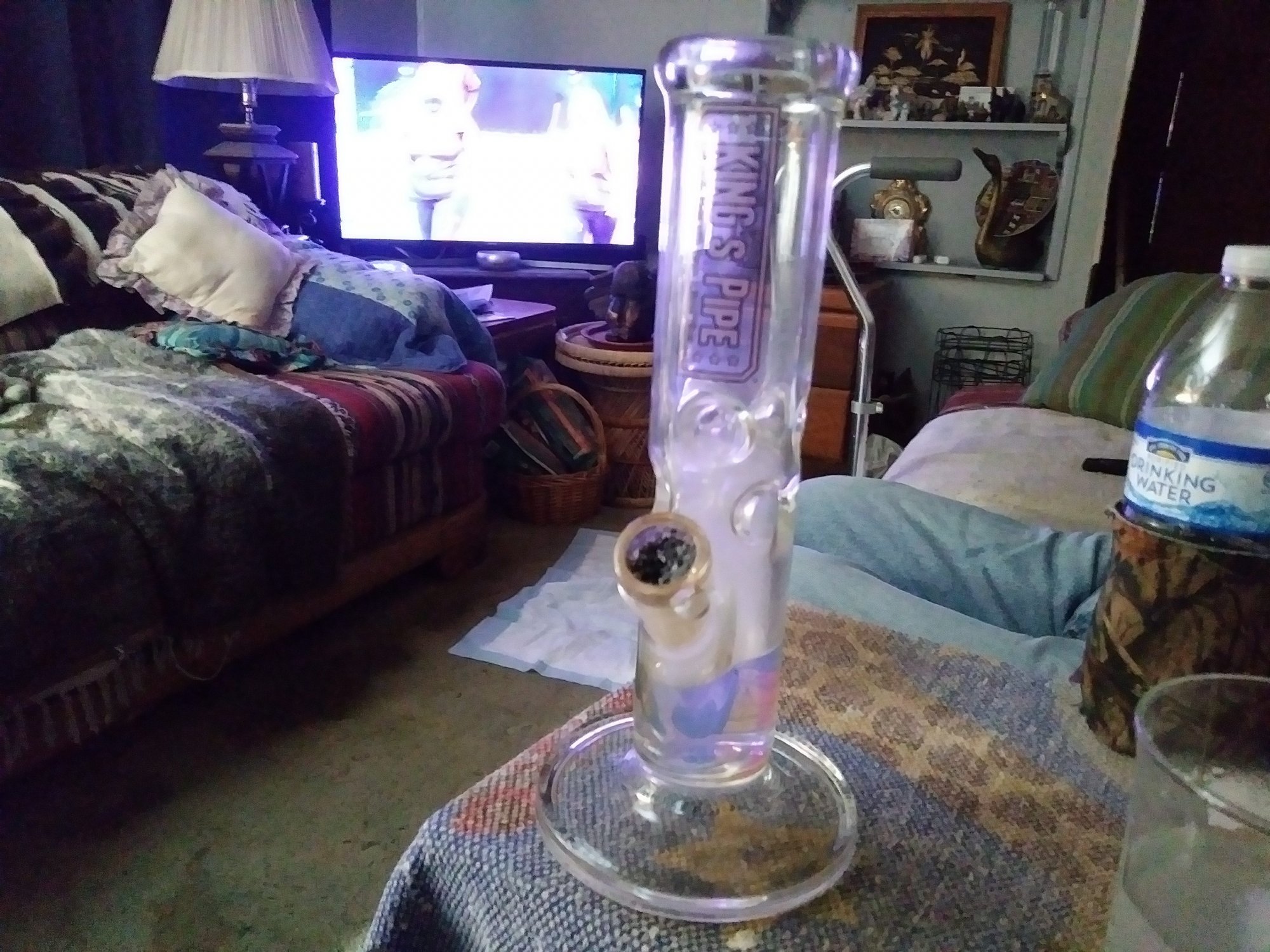 Mine is the same cheap glass utility once made useful using water, not anymore, and yet there's a constant: light.

It may not have to be morning sunlight, actually, just a 12 Watts LED panel and a dimmer shall do - but this provides feedback that proves crucial time after time. Visual hints of cannabic opacity once even inspired me some "Optical Probe" futuristic version, for hypothetical karaoke "social" applications, etc. Ideally i'd like to hear inside, right behind the cotton barrier, as this would certainly help refine my ritual. Judging by a relative absence of coughs it seems i've been on the correct path for me all along. Although i must admit i miss my days in the veranda, when still a resident of Shawinigan...

Got my puzzle pieces together...what now?!

Lazy, tired, bad back, and fed up with carrying buckets of water so I built this water delivery system for my grow room

Saturday at 9:50 AM
Colossus

Cannabis high not for me?