Am I the only one smoking joints at the farm?

I find there are certain occasions and varieties that specifically call for a joint. A day out on the town usually calls for some joints to be rolled, with a glass pipe on hand as well, in case you get a moment to pull it out. Or a day hiking is good for joints. I prefer Haze from a joint as well. The best Hazes always taste better when rolled.
Watching the grass grow and loving it.​
B

Joints are my preferred way to smoke. I will smoke bongs, pipes, anyway...except mixed with tobacco.
M

When i smoke alone most of the time i use my one-hitter looks like a cigarette. I also enjoy a joint a few time a week with friends ... also have a little bong but my lungs don't like it lol! except mixed with tobacco.

i rarely smoke joints. it's just too hard to break up .7~1g of killer weed, roll it up. smoke it, then not even been as high is i had just taken a fatty .2 hit out the bong. but i have been primarily smoking out of a bong for 4 years now so it's hard for a joint to get me high. especially if it's being shared.
but on a side note; last week i got to sample some real og kush. this was my first time ever smoking it, and it was out of a joint with 3 other people and me. and it fuckin destroyed me. i went to go stand up and totally forgot that i can't put too much weight on my leg still and fell right to the ground. the 1 other person that was left with me just stared dying laughing as did I. And with joints you can get a tasty hit. not one that has so much smoke you only get a tease of what it taste like. joints are also nice while tripping out in the woods. or at home. sometime bong tokes+ psychedelics = crazy paranoia, it can be fun and just make everything way more intense. and some people don't like that.
G

This farmer is ol school. I love me a joint. S.D Modiano no gum papers. Gotta be a fatty tho. Dont roll no pinners. If it aint as big around as a pencil it aint worth it. But ya know what...... I dont discriminate. I will take bong ripz ,I will puff in glass and vap it too. Whatever works.
P

Yo, as long as it has anything to do with smokn weed, I have no preference. I'll smoke da shit outta damn near anything. Jointz are great, but i rarely smoke them b'cuz I can't roll 4 shit. I've tried 4 a long time, just got tired of ripping da paper & gathering da bud off my shirt as my joint fallz apart.LMFAO
K

they call me j

back in the states i smoked maybe a joint a week....always had a bong or pipe in my hand. always glass on glass. now im smoking joints all the time and just smoking hash outa the bong..which happens to be all the time as well :)


EDIT: cant wait for a bong session with ed and anyone else wanting to partake....i have some super lungs when it comes to bongs muhahaha
D

NO way really....I would have figured you to be an iron lung( big bong hitter):smiley_joint:
S

I alternate, bong today, spliff tomorrow and my trusty pipe the next day. So on, so forth... I feel like I don't get as high when I just stick to one way.

It's all good. :stonedsmilie:
S

StonedOwl said:
I alternate, bong today, spliff tomorrow and my trusty pipe the next day. So on, so forth... I feel like I don't get as high when I just stick to one way.

pretty much the same here stonedowl athough i do tend to creep towards the bongs:RastaBong: (shotties) lol
peace:damnhippie:
shva
D

You and me both bro !! There is no better flavour either !!

Of all things and ways I have ever smoked... joints have the best taste/flavor hands down.

Vaporizers, I have read, get the most thc to your lungs. I am willing to waste some of the smoke/thc if it means getting the full flavor out of some good buds.
G

I clean my bongs if there's a new strain to try. Otherwise I clean it about once a week.

I don't like joints, they burn too fast, but I'll roll one if there's company.

Zen said:
Of all things and ways I have ever smoked... joints have the best taste/flavor hands down.

You need to smoke with me and my bubbler. My bubbler gives the truest taste I have ever had from any piece, clean or not. No joint, bongs, dry pipe or any other means of smoking has offered me so much flavor as my bubbler. On top of that I give it a very thorough cleaning after every two bowls, and I smoke at least 4 times a day. But that is just me, my only advice to any smoker or user of marijuana is to keep doing what ever works for you.
S

joints are definately best for taste

but i have been smokin mostly bubblers recently

they both have pros & cons

this beast had the whole grey area smoked out 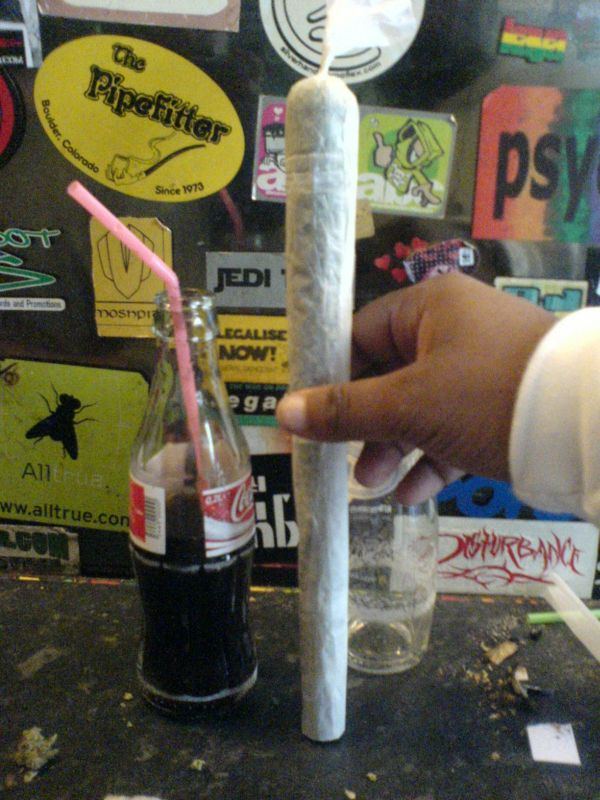 Now that's a god damn doobie!
Must be like 2 ounces in that sucker. :clapping
You must log in or register to reply here.

Aloha from the Big Island of Hawai’i
2

Am i the only one!

S
A Morning Read With Coffee: - First Grow, a Couple Pics & I Need a Little Help