Found a few of these on the underside of some of the fan leaves in my veg tent. I’ve bleached the inside of my veg tent and removed the one plant I just put in my flower tent. They are visible to the naked eye, fast movers(when they’re actually moving locations), opaque and white in color with reddish brown mouth. I kept one fan leaf with one of these guys on it in a plastic baggie. I’ve sprayed with neem oil two days ago and plan to use Azamax, Azera (Azadirachtin/Pyrethrin), and spinosad each three days apart Incase they are a pest. They don’t appear to be developing two black spots on their body but I’ll keep checking the one I have quarantined. Any thoughts on what they are? Can you show pictures of the damaged leaves?

I didn’t see any damage yet. I only saw 3 bugs. One on each plant. I may have caught it really early during one of my routine checks. I removed a ton of fan leaves on all the plants in my veg tent, and began treating for spider mites just in case. The one bug I have contained hasn’t laid any eggs and nothing has hatched. So I have no idea what it is. Im def on the look out for mite damage on the leaves though.

Hey, can you pick those off. Throw them away and see if you can find something that repels them that is safe for the plant and use that. Neem oil?

So I thought I killed these things. I’d been rotating azamax, neem, azera, and captain jacks every 3-5 days for like a month(yes, I spray the underside too). I decided to do a random bug check on my strawberry amnesia since she was the last to be rid of be critters. Overall, the plants look healthy. To my surprise they were on two of my plants, not many maybe 20 altogether that I could see and I checked nearly every fan leaf I plucked off.

Today, I sprayed the plants that I just put in the flower tent a few weeks ago with captain jacks (the other plants are almost done flowering). I also added 2 tablespoons of captain jacks to each gallon of water and drenched the coco. I guess I have to start the rotation again., ugh. I still can’t identify this mite. It’s not the 2 spotted spider mite as you can see from the pictures above. I am guessing it’s some kind of common spider tree mite that got tracked in? Is it a beneficial? Any thoughts. Here’s a picture of possible mite damage. I say possible because I had been treating with azera which has pyrethrin which can damage the plant. Also the foliage was dense and pushed up against the tent walls which can cause weird leaf shape. Some pics are of the understand to show some curling. There is also some canoeing. Any thoughts? 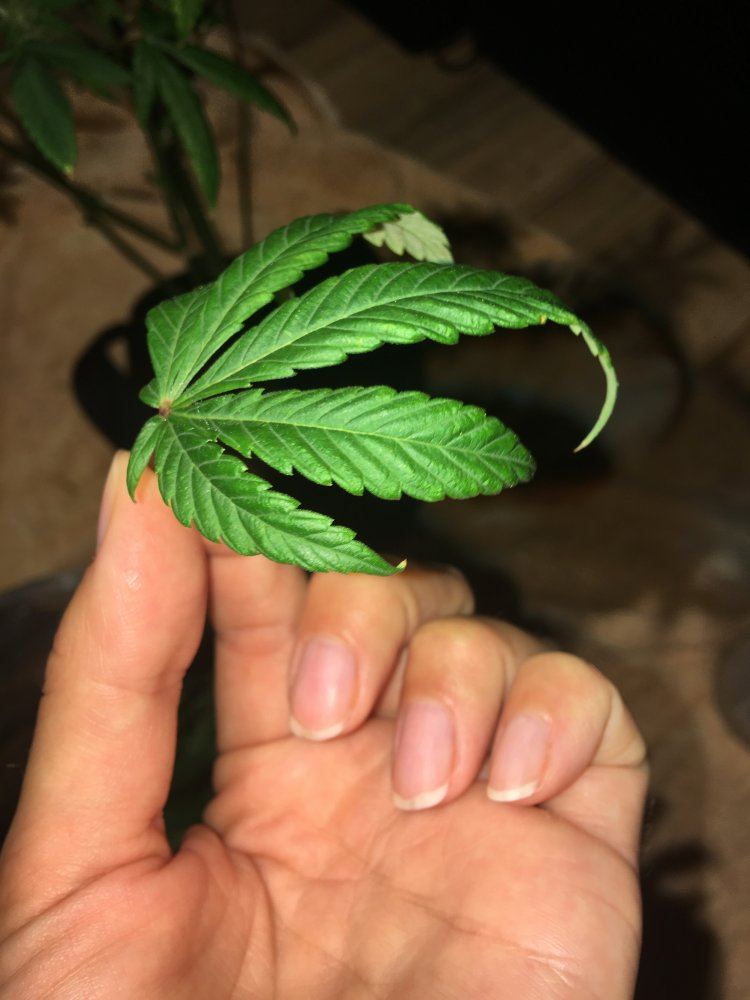 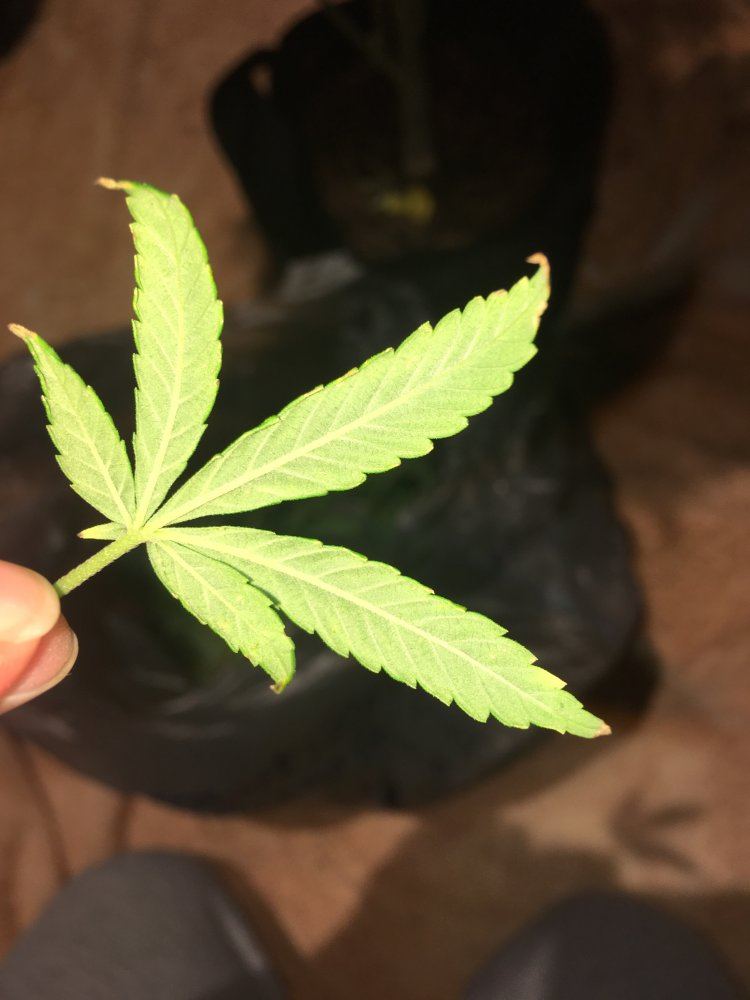 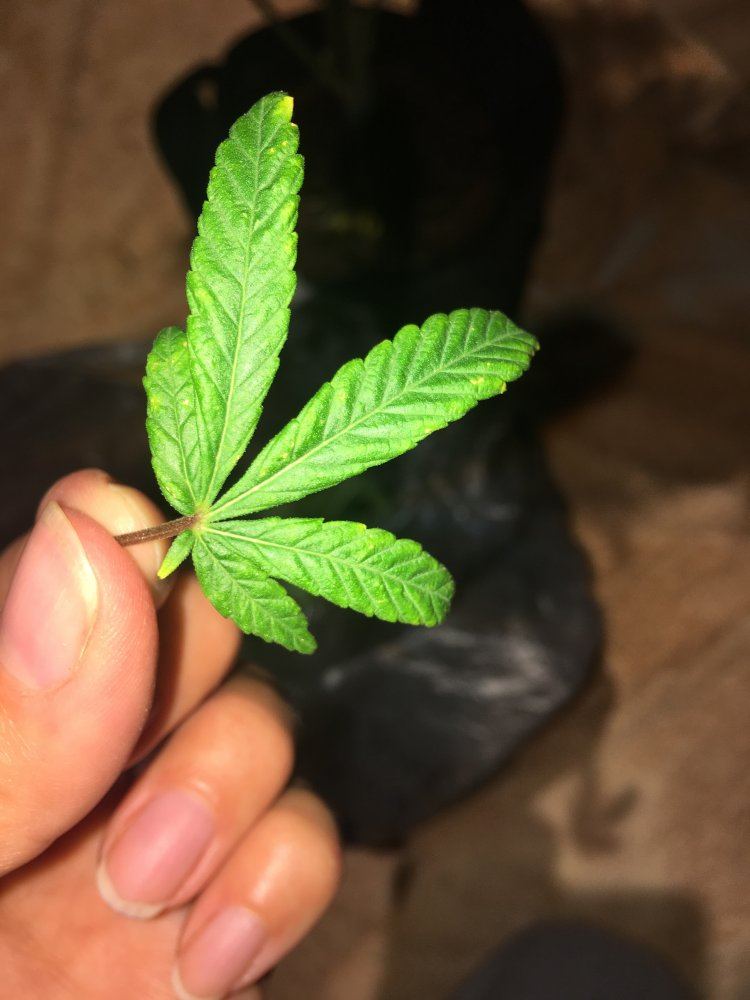 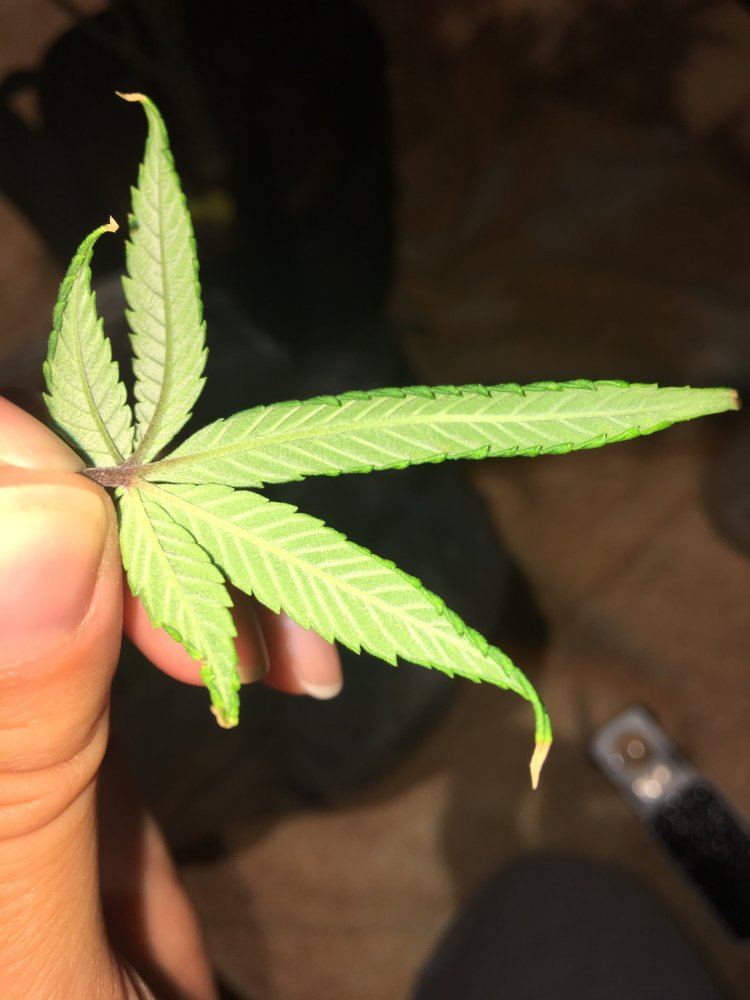 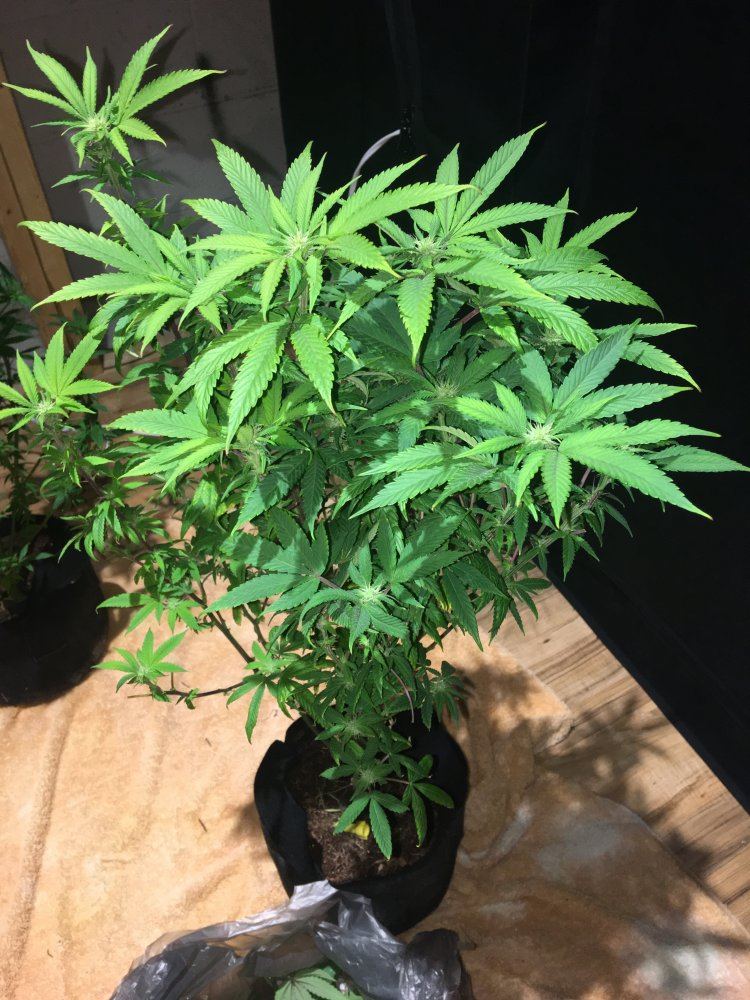 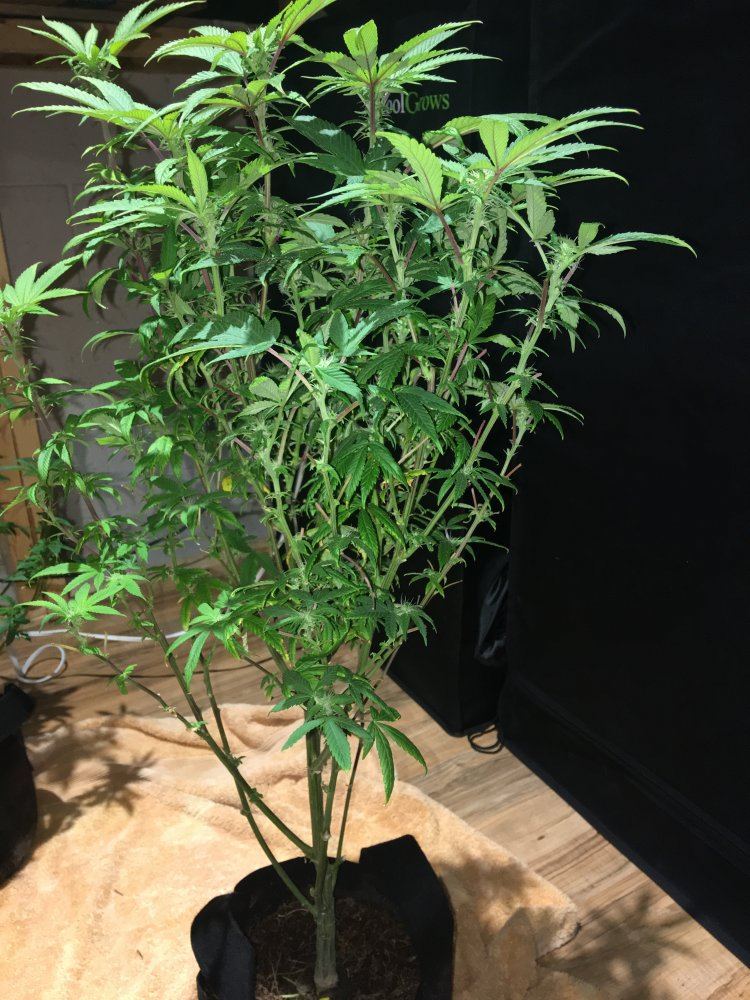 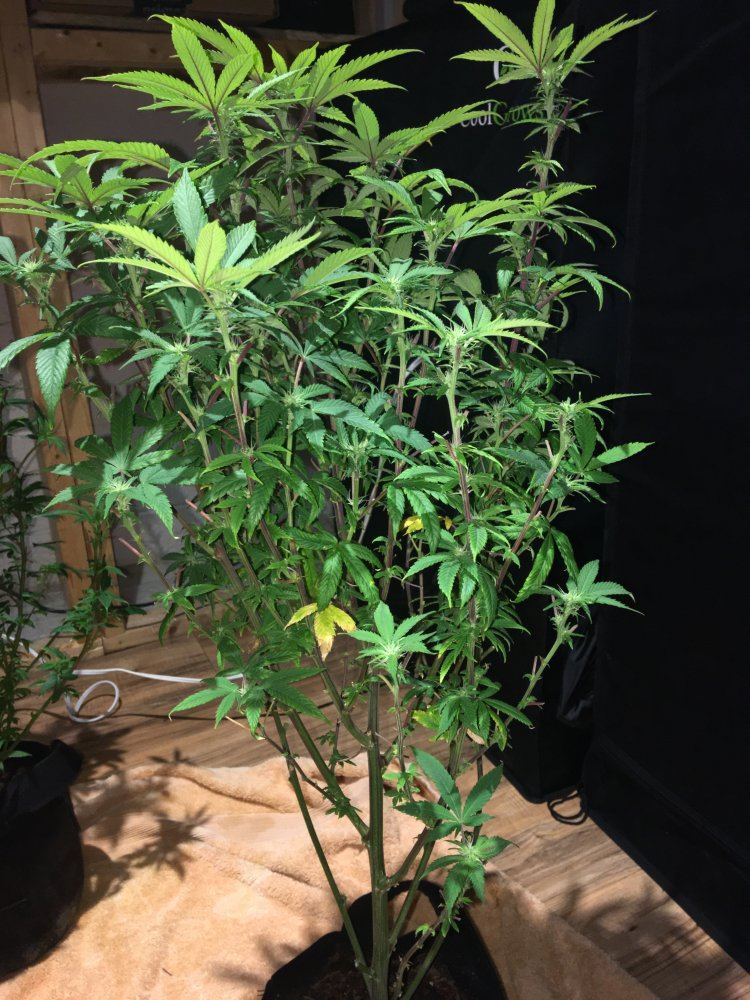 Since this mite species can’t be identified, I’ll just continue to treat for spider mites. In the end all spider mites cause the same kind of damage. I’m going to add green cleaner and nuke em to my arsenal. If I can’t rid them after a month, I’ll use foggers once my plants in late flower are finished. At least they’re not two spotted spider mites, right?!

Moving forward, I am ripping out and burning these dwarf Alberta spruces that I think have spruce mites. They are planted near an entrance door to our house. As part of my existing IPM, i’ll now start spraying my ornamental plants around the perimeter of the house.

In the mid 90s I lost a whole garden to mites, tore it down left the room sealed all summer, of course I bleached it several times and sprayed everything I could think of, every nook and cranny.

3 months later I started growing again and almost immediately they were back! I could see them with my eye I recall they seem to have a spot on them too, that's when I quit growing until 4 years ago (not because of the mites, moved, got married & all that happy crap but the mites were a factor why I stopped)

Much better products available now (ps. Neem doesn't work on mites, don't waste a spray cycle using it, hit them with something stronger instead) but so far I've been blessed not to have to deal with this issue because if I'm honest it's the single biggest nightmare a grower a can run into in my opinion.

If I were you and had a very light infestation I would consider releasing ladybugs? Best of luck and keep after them!
Last edited: Jul 25, 2019

could be broad mites or russet mites, diatomaceous earth, neem oil, half a teaspoon of dawn dishwashing liquid to a half gallon of water, or a cap of hydrogen peroxide to a quarter gallon of water, spray until saturated. These are natural and effective home remedies that repel most aphids and such. Although that could be an aphid, just use any of those solutions and you should be fine. Best wishes.

I had a battle with spider mites the last grow and ended up using a flea fogger (contains pyrethins), and it took care of things after a few applications about 3 days apart. I first saw very tiny dots on the top of some fan leaves, and found the mites after looking for them under some leaves. I couldn't see the smaller ones.

The only think have going for me is they are not the two spotted spider mite or russet. I am positive they are not broad/cyclamen because I can see them without a scope and they don’t have similar morphology. They are definitely a species of spider mite and all spider mites cause similar damage.

Thanks for the recommendations on products. I’ll take neem out of my arsenal, add the flea flogger (doktor doom) and use floramite as a last resort.
B

You should really be using lost coast plant therapy. No need to rotate out anything else. Its omri listed and kills on contact. can be used up to day of harvest and overall is a great product. Check it out. Best of all they cant build a resistance to it.

borntaskate said:
You should really be using lost coast plant therapy. No need to rotate out anything else. Its omri listed and kills on contact. can be used up to day of harvest and overall is a great product. Check it out. Best of all they cant build a resistance to it.
Click to expand...

Thanks for the recommendation! I’m going to order the 12oz bottle. They have it for $32 right now.
B

1 oz makes one gal of spray. Best way to use it for bugs is every other day for 5 sprays. Use it during the night cycle and make sure you get the bottoms and tops of the leaves. Get good coverage. Then you can use it once a week for maintenance. I have healthy clean plants I spray once a week in veg and the first couple weeks into bloom just to be safe. As long as the lights are off and the product drys before lights on you should never see any negative effects.

New development. These critters still look the same (see my first post for photos) but I saw a bunch of them crawling around on the outside of my fabric pots. They’re not root aphids because they don’t have the aphid morphology. I am positive they are some kind of mite but why would they be on the outside of the fabric pot? Could they be bulb mites? If they are, why am I finding some on the leaves? I don’t grow anything outside that is a bulb mite host. I am going insane trying to figure this out. I’m not getting rid of them because I can’t identify them. They don’t look like russset because they are kind of fast when they’re really moving and oval/round. I don’t think they are broad mites because i can see them without a magnifier. I have found a few of the very bottom leaves turning brown and falling off. There are no spider mite bite marks on the leaves. The only leaf damage is a few of the bottom leaves turning brown and dropping. Any help would be greatly appreciated!

It sounds like an infestation of non cannabis eating bugs, to me. If you are seeing a ton of them and your plants aren't getting eaten up, then they ight be some type of gnats. Losing the few bottom leaves is pretty common, especially later in growing or flowering. If you aren't seeing the tiny dots that mites typically leave on the leaves, then they might be harmless. A nuisance, but harmless Make sure they aren't white flies, which can ruin things too.

Jimster said:
It sounds like an infestation of non cannabis eating bugs, to me. If you are seeing a ton of them and your plants aren't getting eaten up, then they ight be some type of gnats. Losing the few bottom leaves is pretty common, especially later in growing or flowering. If you aren't seeing the tiny dots that mites typically leave on the leaves, then they might be harmless. A nuisance, but harmless Make sure they aren't white flies, which can ruin things too.
Click to expand...

My thought was a non cannabis related pest too because they don’t seem to eat the leaves.

Let me bounce this idea off you. They are definitely living and reproducing so they must be eating something. Do you think thy are eating the decaying plant material? For example, the roots grow through the fabric pots and get air pruned, could they be feeding on dead roots that pop through he fabric pots? I grow in coco so they probably don’t like the medium. I found them on the outside of my fabric pots in the flower tent too. They don’t appear to be subterranean (or they just don’t like coco) but might feed in decaying material. I have a vegetable garden outside but I am super careful and do all my cannabis maintenance in morning and don’t step back into the grow area without showering.

What about a type of soil mite? They eat decaying material which could be why they are populated on the outside of the fabric pots near the air pruned roots. They might not like the coco coir which is why I find some on the leafs. They also crawl on top of the leaves not just the underside. I’m going to keep researching to see if I can identify this mite since i might be close to figuring out what it it is.

I’m going to do a little test. I’m going to put a piece of apple, lettuce, or a piece of tomato in one of the pots. If the mites are eating it, then I know they are white soil mites which eat decomposing material, commonly found in compost/worm bins.
You must log in or register to reply here.
Share:
Reddit Pinterest Tumblr WhatsApp Email Link
Top