Hi folks, sorry for the lack of updates. Been a little busy. Things are going great up here. The weather has been pretty hit or miss but things are rolling along nicely. We did have a pretty major set back that at the time seamed devastating but we have bounced back. A couple weeks back we got a heavy snow and a flock of birds made refuge in our greenhouse. They pecked the crap out of our seed starts. I have never seen anything like it. There was feathers and bird shit everywhere. All of the fan leaves were pecked off but the top growth was left untouched. This was about 400 starts and they were about six inches tall. We tightened up the greenhouse so nothing could get in and the girls have recovered nicely. I will of course wonder at the end of the season how well we would have done without this set back but it gives me some motivation for next year. It is always something. I had gotten past the slugs and the rodents and thought I was in the clear but I never thought I would have to look out for the birds. Anyone ever had a bird attack on their herb? Here is a pic right after the bird attack. 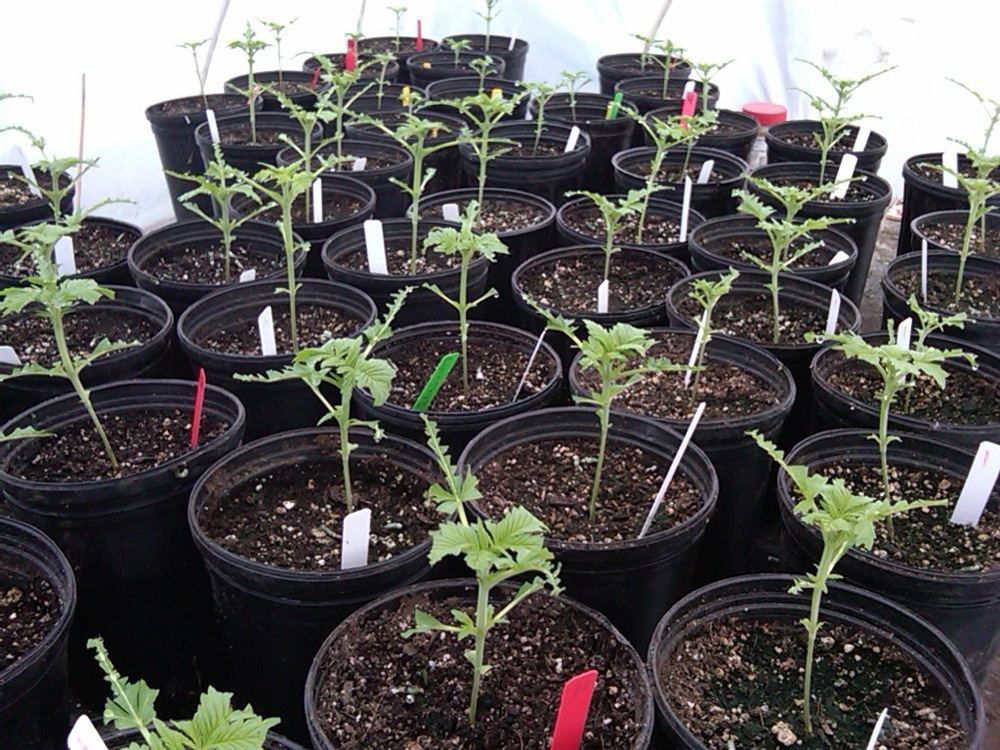 Here is a pic a week later. 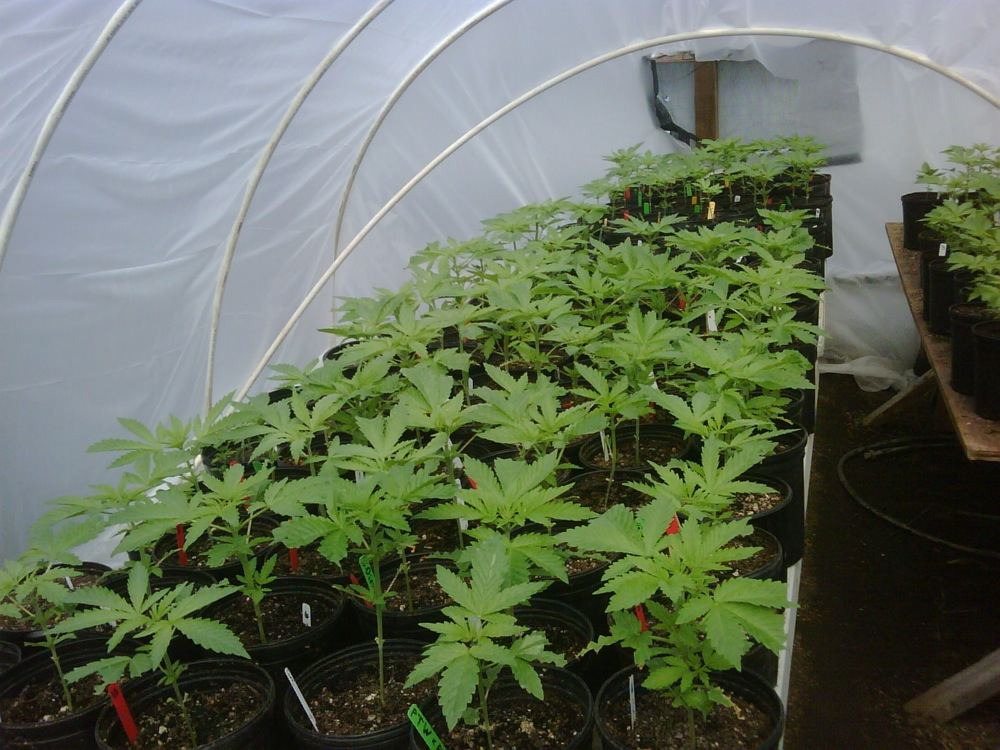 They are mostly between 1-2 feet right now and they are sexing out. They are taking a really cool bushy shape that I have never had before at this size. The lower branches are nicely developed because of this attack. I have also never had seed starts sex out this early and I am thinking it has to do with the stress of the attack. We have almost all of our soil mixed and we will be putting some starts out in a couple weeks.
My soil mix is as follows.
Sunshine Mix Natural and Organic #4
Nutri Rich high calcium chicken poop
Super Soil Earth Worm Castings
Pahroc Perlite #4
Steamed Bone meal
Kelp
Oyster Shell
Dolomite Lime
Gypsum
Thats it for now folks. I will try to update a little more regularly but there is not too much going on just a lot of manual labor. The gardens are shaping up nicely and I am really excited for this season. I will try to get some recent pics soon. Pray for sun.
T

What birds did that? Good Lord, I might have cried to see that.

Nice to read you.
T

SeaMaiden!!.... I was wondering where you swam off to, and why you stopped popping in for chats so long ago

No time for chats these days. I thought I'd told you where I was. Good to read you, too!
O

this is a thread that I need a chair for. dame nice greenhouse, peace.
H

Things are coming along nicely. Should have all of our soil mixed by the end of this weekend. Here is a pick of my garden with 35 300 gallon smart pots and Ganja D showing off all of his hard work. He and the Misses have been busting ass around the farm. 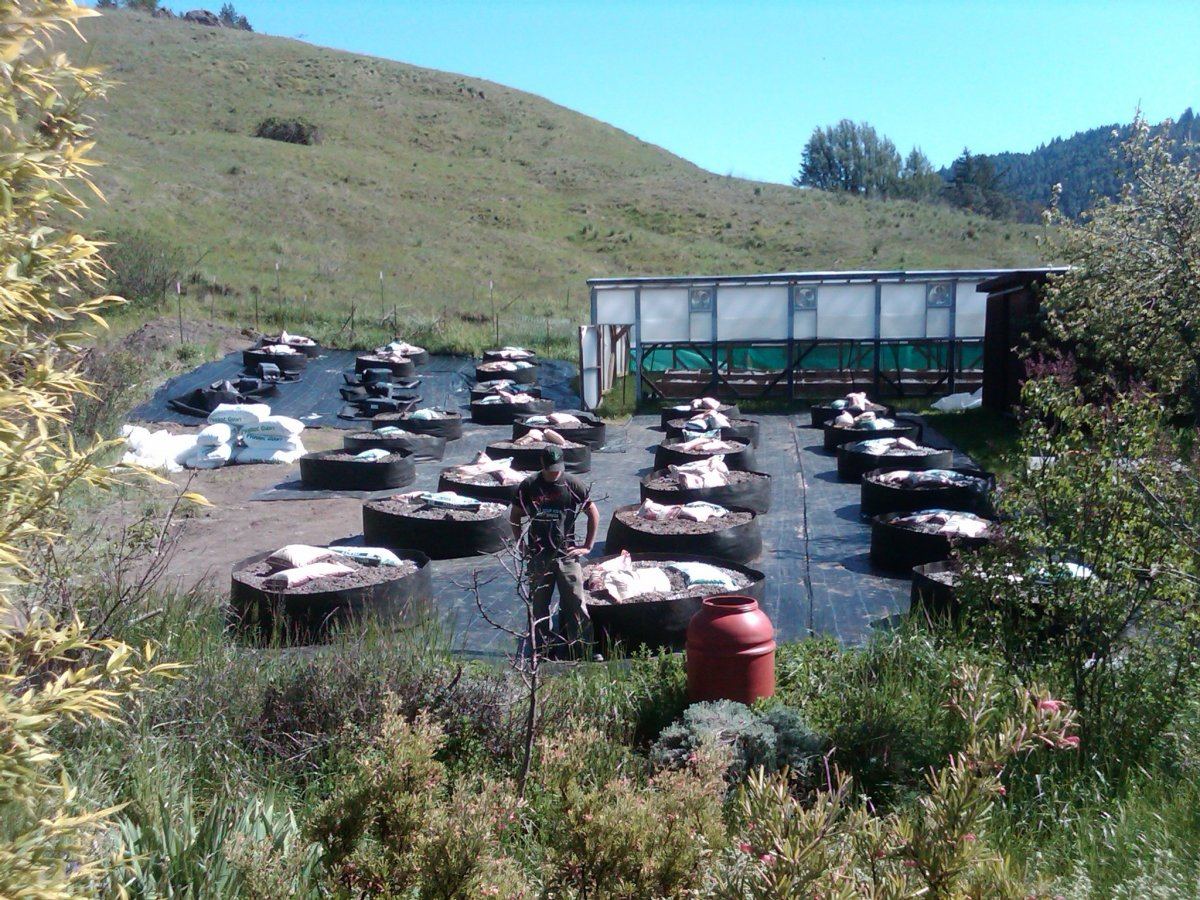 Here is another garden that just needs its perlite mixed in and it will be ready to go. There are another five holes in this garden that you can't see. 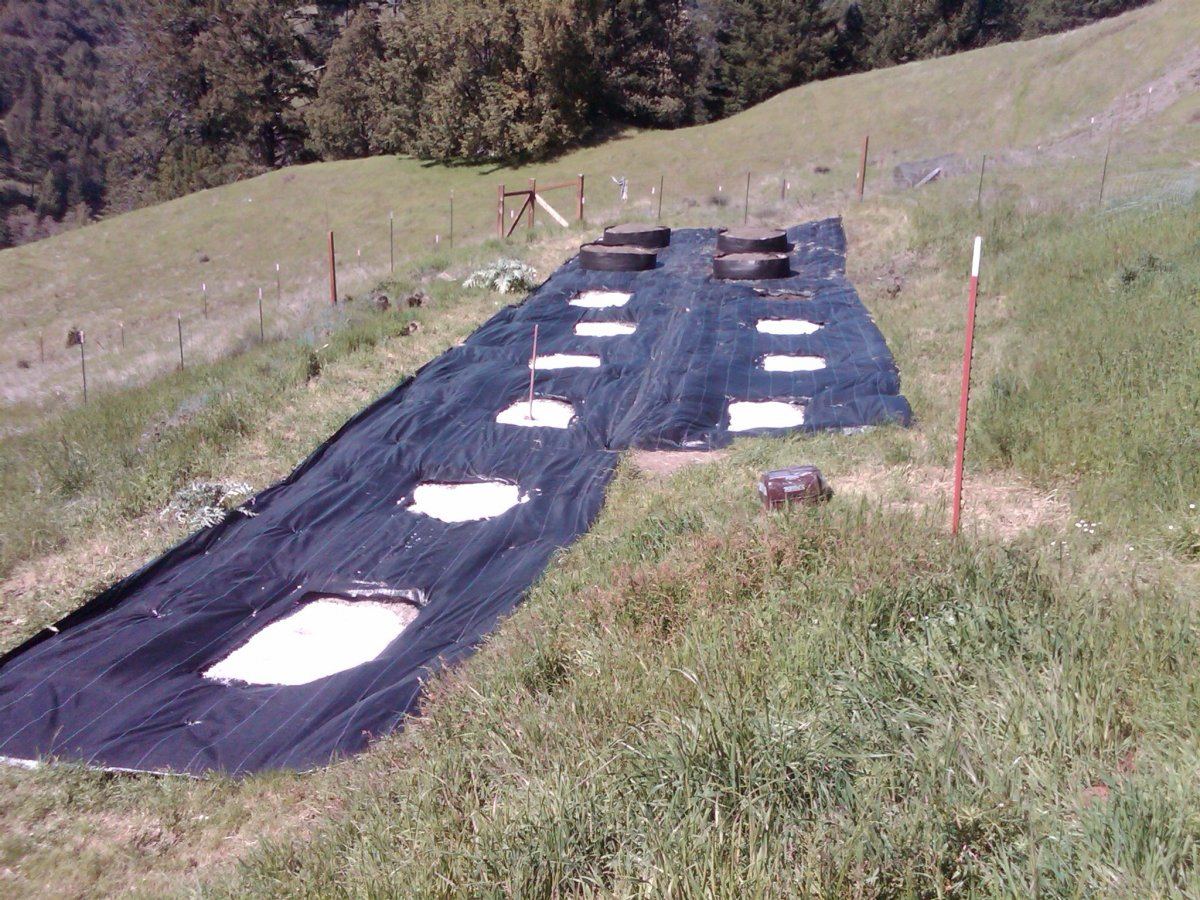 Tomorrow half of these will be moved to another GH and the rest will be transplanted. Should have happened a few days earlier but that's life. Busy Busy. 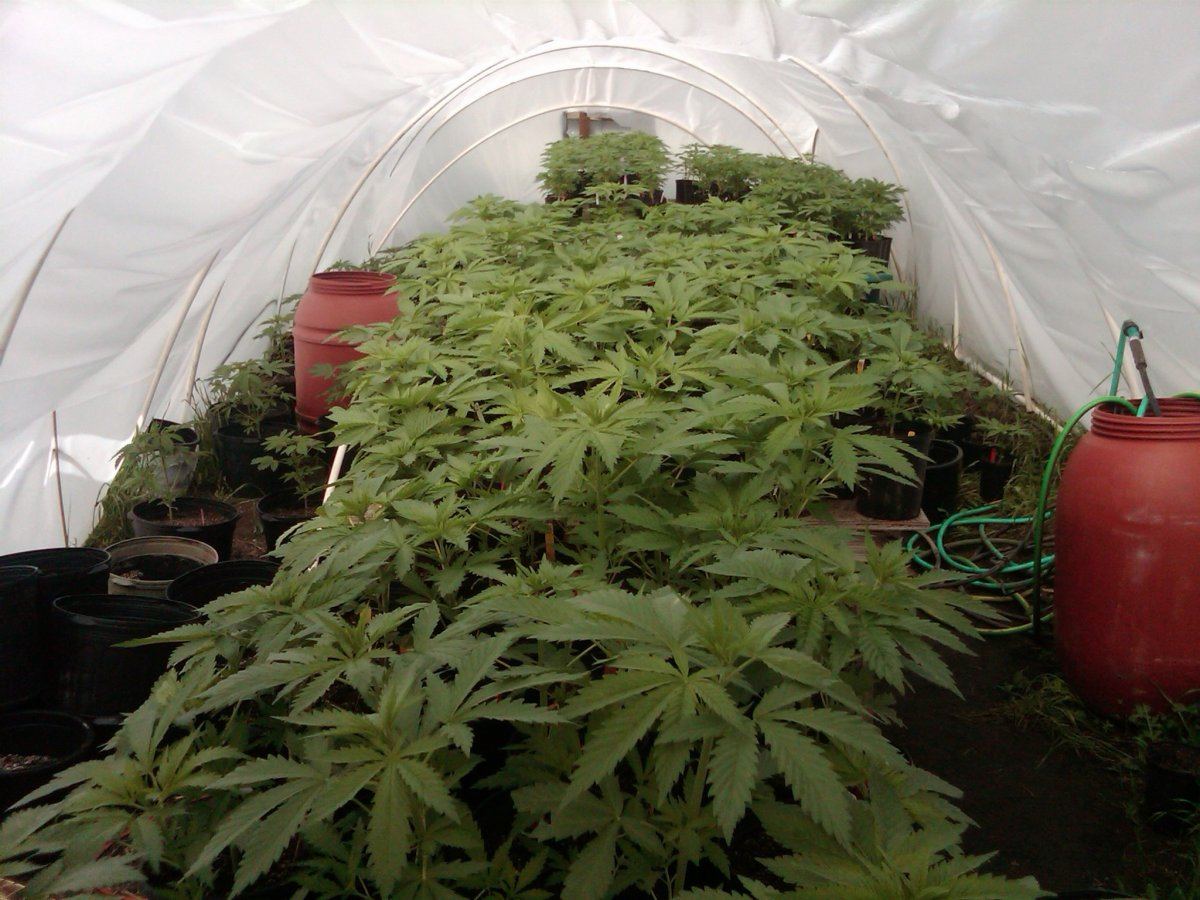 I will be at my other garden tomorrow and should have some interesting shots to share. Take care folks.
D

I never knew there was such a thing as a 300 gallon Smart pot!

This remind me of Tom Hill outdoor grows, I've seen a few from u too humboldt. Always a pleasure to watch so im glad i picked this one from early. Good luck with everything
S

pulling up a chair and taking notes.....all i can say is super impressive.......as is your gallery

THAT's the size I see up there in Humboldt. You guys and those CRaZy 200-300 Gallon smartpot outdoor grows. One of these days in michigan here when the police settle down on busting outdoor grows, i'm gonna show people WTH is up with that. :)

You'll have to put them in greenhouses in Michigan, though, won't you? So far in Cali we've had a pretty cool spring (central/north). I put babies outside last weekend, then they got their toes frozen with snow.
F

Much respect humboltlocal. Seen your picts in the mags before and my god man that's some dreamy shit right there!

Seamaiden said:
You'll have to put them in greenhouses in Michigan, though, won't you? So far in Cali we've had a pretty cool spring (central/north). I put babies outside last weekend, then they got their toes frozen with snow.
Click to expand...

Frost seems to be long gone here. I'm putting all my vegies outside after this weekend. I would think greenhouses or mini-hoops until this point then you can shed them around may.

I'd think anything that you can harvest off before the rain sets in around October around here would be ok. Every year kinda varies though. I have a feeling this year will be cooler if the Iceland volcanoes keep throwing ash all summer.

I'm east of Humboldt, and we had snow just a few days ago. Been raining, cold, this weekend is supposed to warm up and then we have another cold front moving in. EVERYTHING is changing. So it's a real trip to read a Michiganer say that the frost seems to be long gone. WTF? We're flipped around!

Sounds like your growing season is pretty close to mine (USDA Zone 8/Sunset West Zone 7a), so, yeah, barring anything like the big storm we had last October that forced an early harvest, you could leave it out. I would have left mine out except that storm was predicted to be one helluva, and it turned out to definitely be one helluva. Several days without power (gotta love having your own generator, a must-have up here) and some of the biggest, oldest oaks looked like someone had taken a gigantic weedeater and ripped them to shreds.

By the looks of things it's about the same, weather-wise, in Michigan as it is where I am. Things that make you go, Hmmmm.
S

I am tagged
H

Some more pics from today.
OG and Mr Nice clones. A lot of these will be getting moved into the Green house in the next couple days under supplemental lighting. 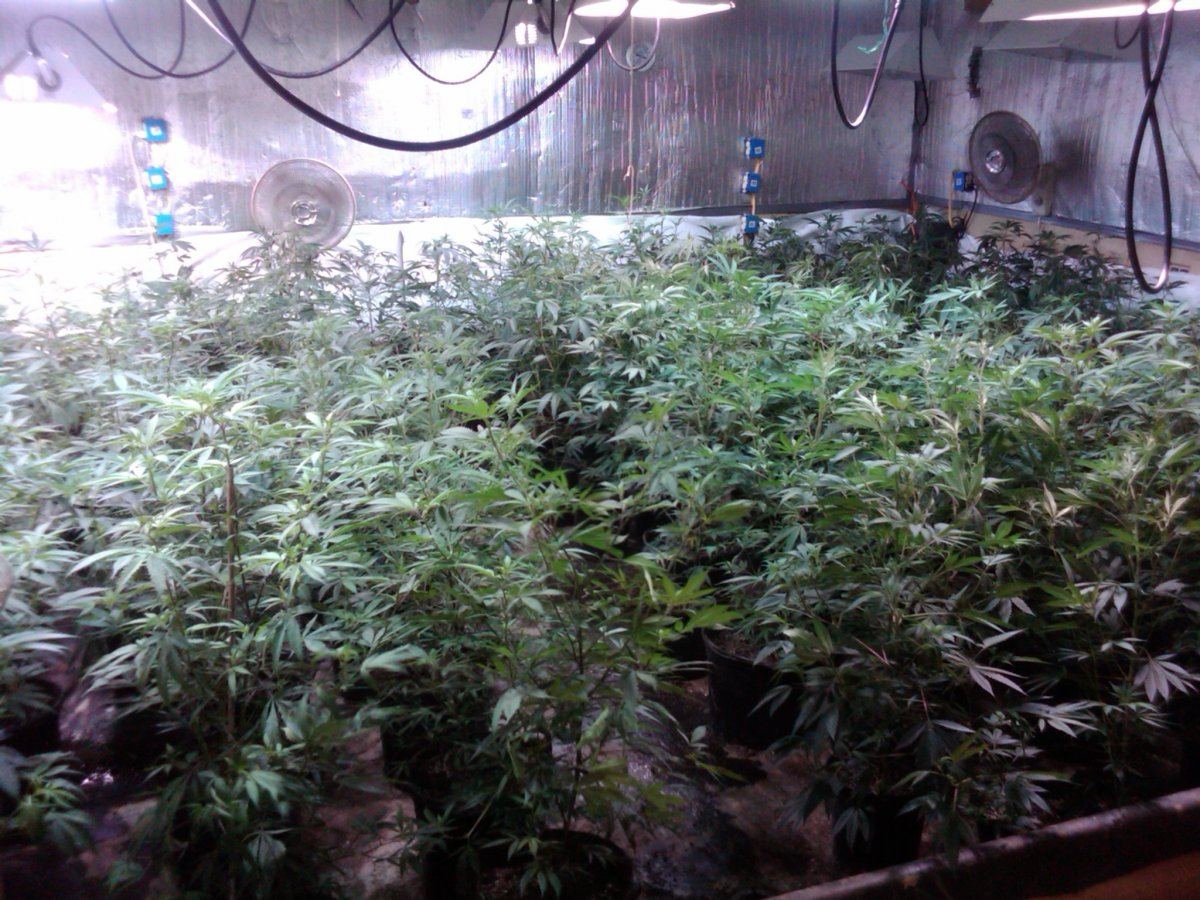 This garden has 25 200 gallon smart pots. I went with 200 vs 300 because this garden doesn't get the best sun. I am already regretting it. The greenhouse has 15 holes in it. 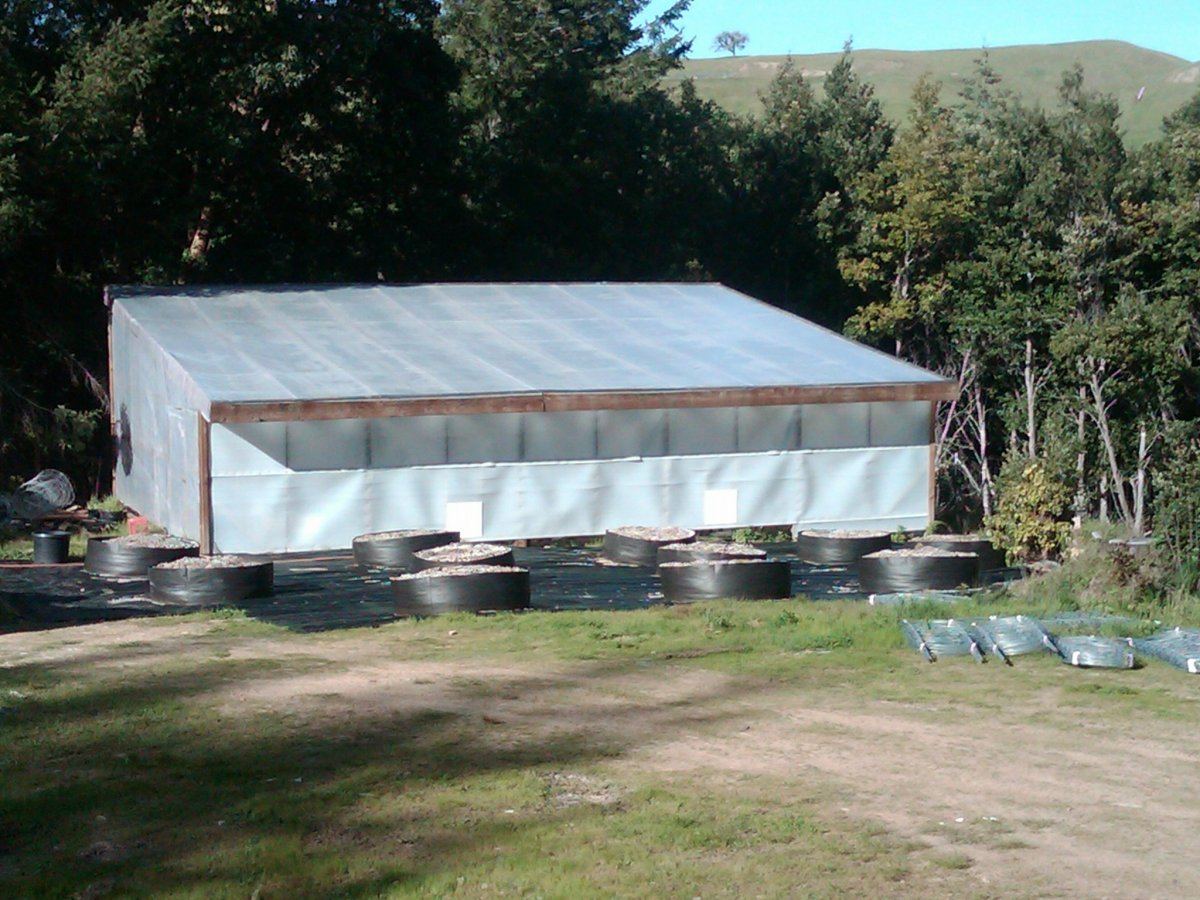 Everything coming together nicely.
K

Oh MY GOD!!!!! I wish we had that kind of liberty in here in this so called "Bible Belt". As a horticulturist by trade, oh what I could do with that kind of "outdoor" space!!! Way to go brother! I know brewing maybe an issue, but do some research, and improvise. I know you said time is an issue, but I'm sure you can agree it will pay off in the long run.

Can't wait to see your grow take off HL'

Why do you regret going with the 200's, humboldt? You feel you should have done the 300's, or something different?
You must log in or register to reply here.
Share:
Reddit Pinterest Tumblr WhatsApp Email Link