Aaah... I seen them Jersey Giants before in the Meadowlands years ago. Every time I think Eagles now, I can't help but think of it's always sunny in philadelphia.

Still freezin in the room? Any progress on the project?

Mine is about to go down for a while. Bummer. New sprouts started, though.

Yeah, actually a little ahead of my revised schedule - wait til you see what the clones in the EZ look like, they're turning into monsters.

Too drunk at this point to be of much use today, but I'll take some pics of my progress and post them tomorrow - really liking how I'm buckling down right now :)

Turned on a 600 and put my three mother plants around it, and that took temps from 62F to 78F - pretty pleased, because the plants have FUCKING EXPLODED (both mothers and clones) since I did that, and also because that tells me that my room is pretty well sealed (outside temps are <20F).

Lead, where the water is distributed to the top plant is without a doubt aero - that water comes out in a very fine spray (from the sprinklers - remember, I switched out the plastic shrub waterers and put in proper sprinklers), and then starts "coagulating" (a horrible word choice, but I don't know how else to express what the water does) and running down - BTW, are you talking about Betterboy from ICMag's grow?

Long story short, the first (top) plant gets the benefit of the "aero" portion, and then I'm assuming that water will get diffused by the plant's roots when it runs down the column so it *shouldn't* hurt the lower plant's roots below too much - I'll see if I can't take a quick video from above one of the columns to show you exactly how it "works".

If the 2.25GPH sprinklers that are in there now are too much, I can always switch out to the .75GPH sprinklers - thinking of doing that anyways for a finer mist at the top of the column.
Click to expand...

Thanks for breaking it down into the condensed version, that make more sense.

I was going off the video and thought I am may be missin something...
That is why I mentioned hey I could be wrong about the water speed. Sounds like your got it worked out.

Saw the vert system at a grow in Vancouver, BC. The posts that hold the netpots were not angled, but was almost exact in outwards appearance.
Your is the first I saw online. Have seen other vert sog setups in person. colesssium and another brand (cant remeber the name) held rockwool slabs vertically on the walls.

Maybe high plant #'s is maybe why we do not see alot of sogs online.

hopefully will be in action soon.
B

TF - that game was fricking awesome, still on a high from it :)

Lead - yeah, my system isn't even a "true" SOG (might build one out of 2" PVC with 200+ sites as a side project in the future), but agreed that anything over 100 plants (and especially Colis at 300) would be questionable at best to put online.

Anyhow, GOT THE PIPES UNFROZEN!! :) Had to rip the tubing off of from outside, so I'm still gonna need to figure out a way to muffle that, but frozen pipes should never be an issue again.

Also turned on a 600 which brought temps up and growth has exploded since that happened - transplanting ~30 clones into an E&F tray to veg for a week or two when (hopefully) they'll be ready to give me 120 solid and strong clones.

Anyhow, pics are attached - clones and the mothers (probably just gonna toss them sooner rather than later as opposed to taking any clones off of their sickly and ugly asses). 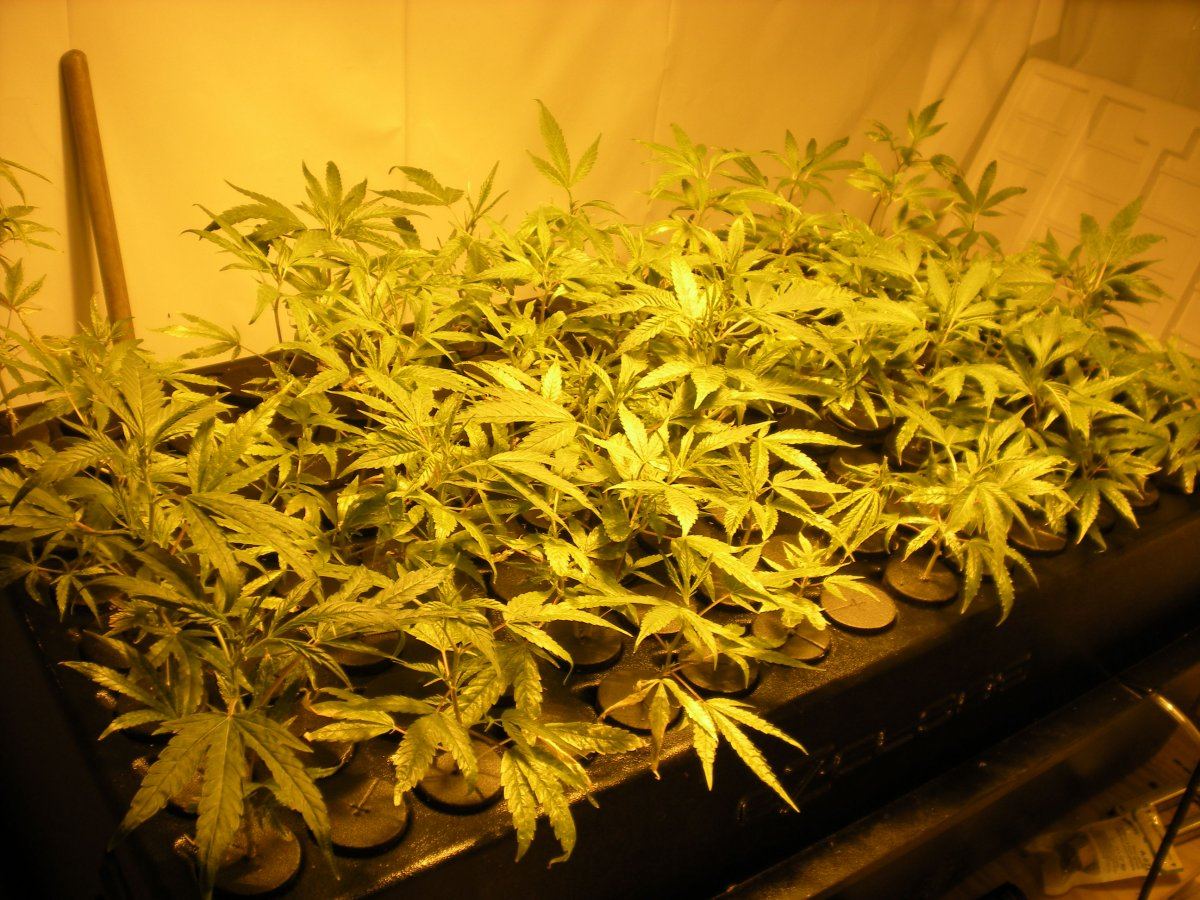 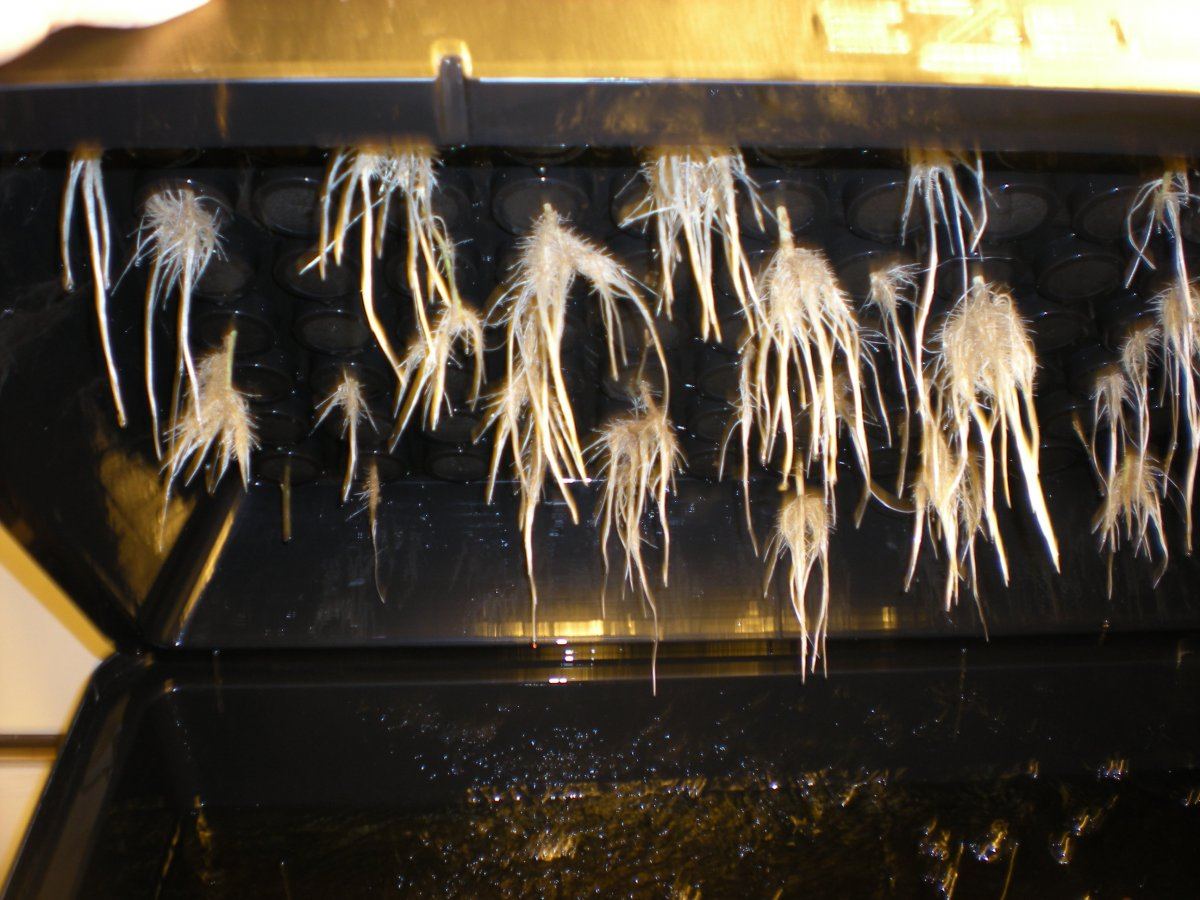 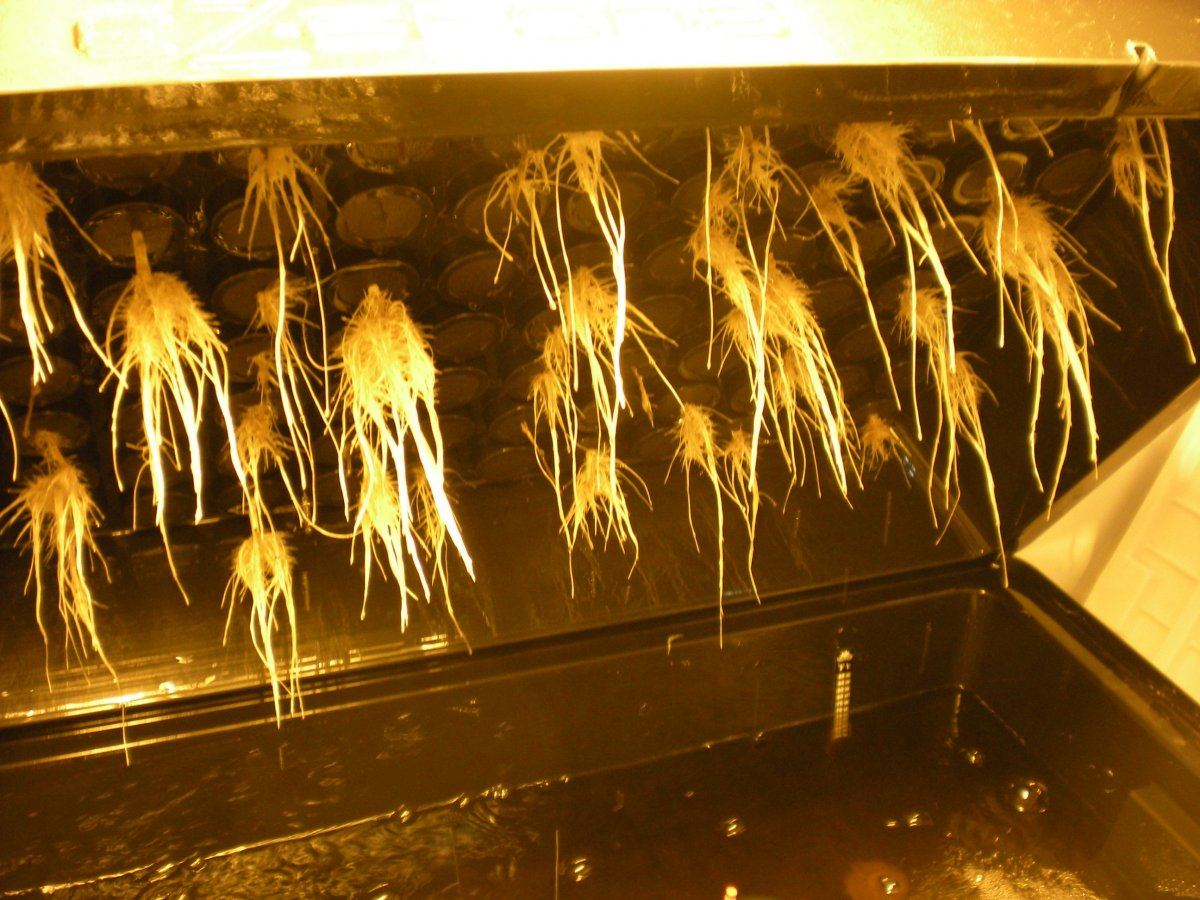 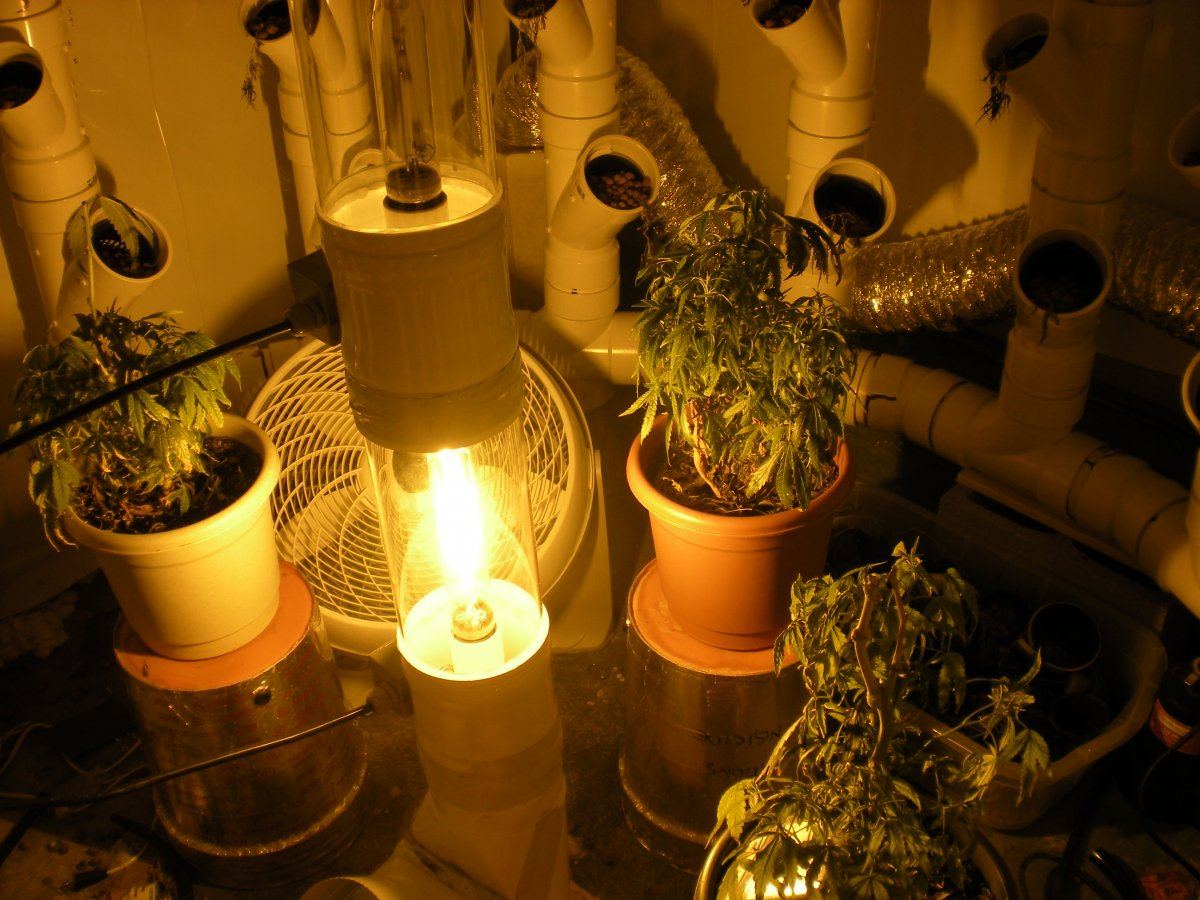 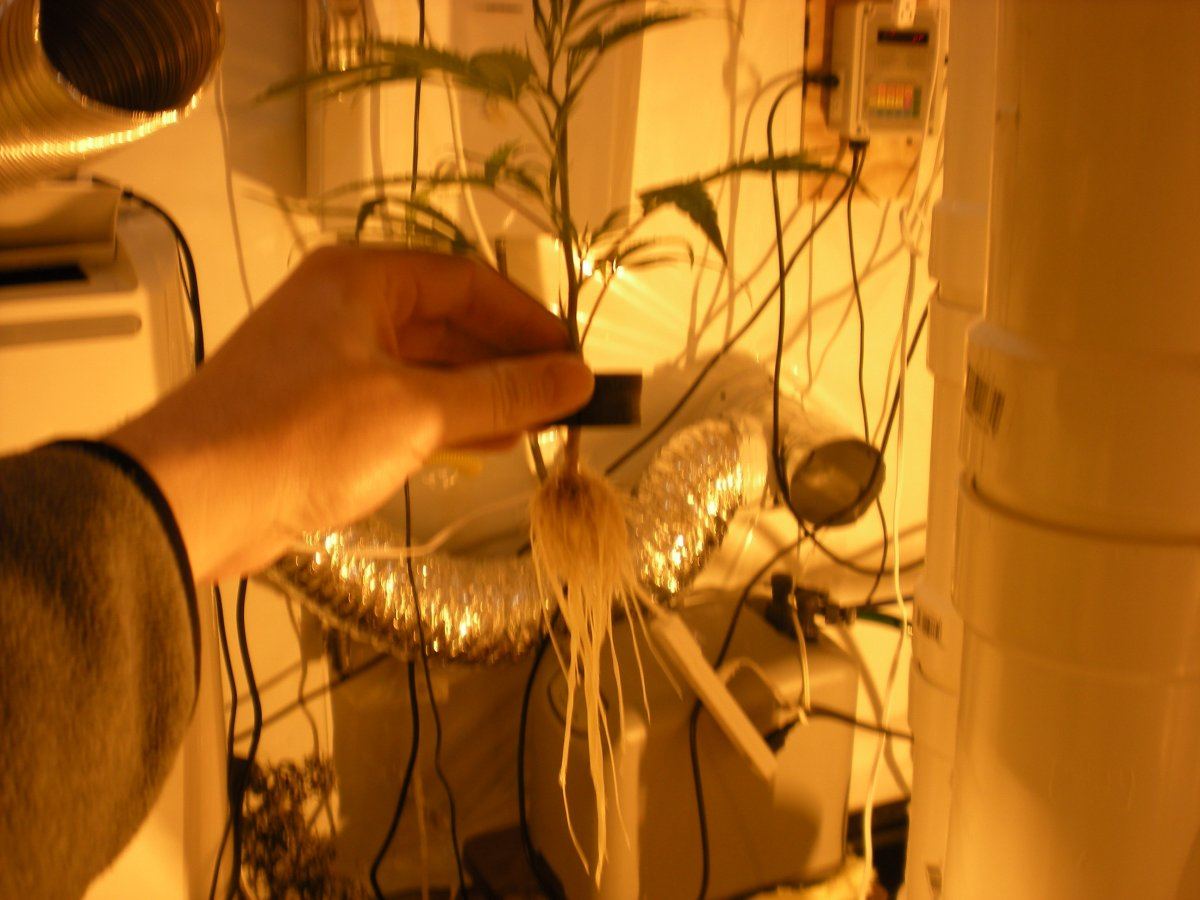 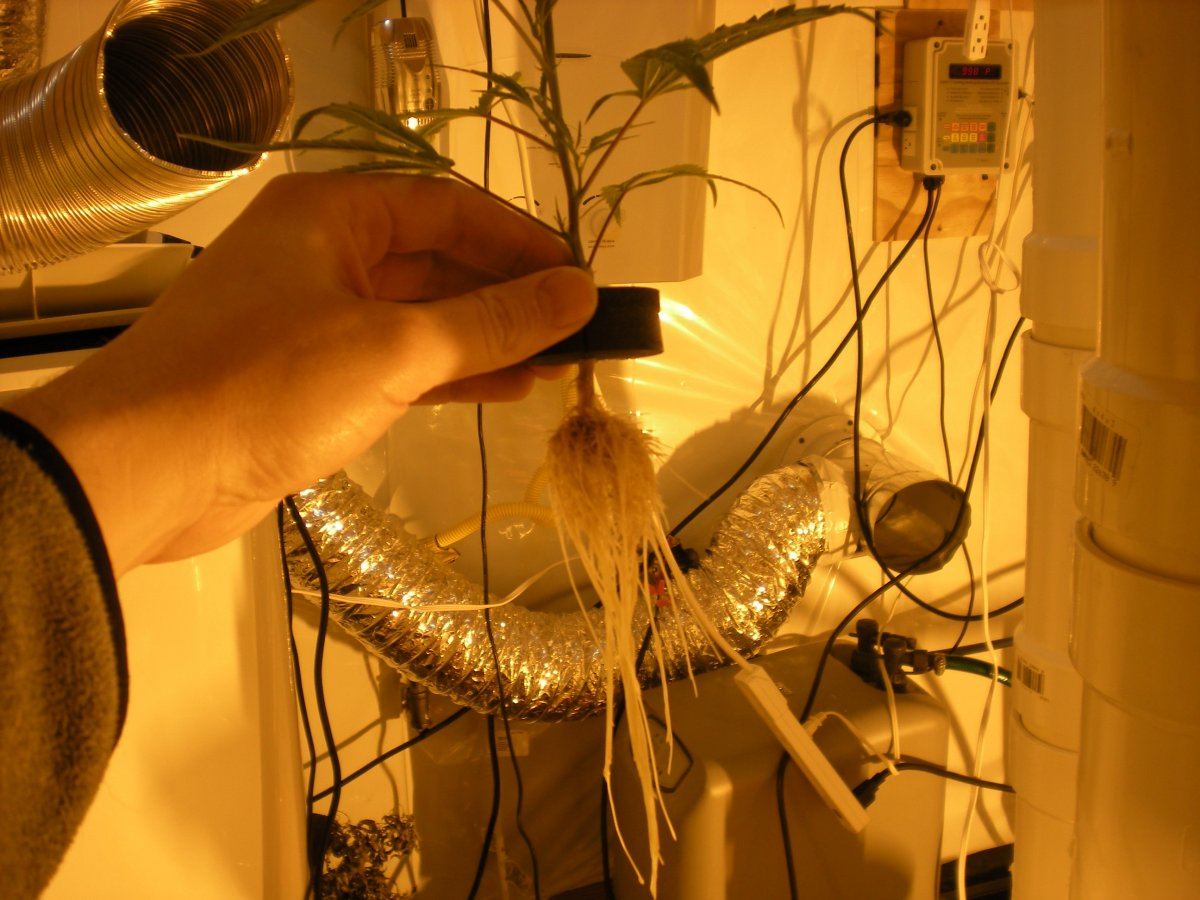 Bobby,
looks like the aero cloner is sure kicking ass. What's the story with those moms?
If I didn't know better, I would say that those are some more that I musta screwed up :D
Does that mean the the pentadecagon will be alive soon? That would be hot.

I'm telling you. I dont know much, but I can imagine if there was a sprayer manifold inside the main pipes that hold the plants. One sprayer per plant site. It makes me think for future experimentation.......

its like a vertical nft, its a sweet idea
B

Thanks for checking in, Boom - your new setup is looking mighty fine, bro.

TF - that is a result of leaving them for two weeks in a pile of water and 6' from a weak fluoro bulb, and THEN having the audacity to cut every single clone-able site off of each and every plant - they've shown zero recovery speed up until now, but if I can get 20-30 clones off of them (in two weeks when I take more clones) then that's less veg time I need to veg the current crop, so I'll keep them until that and then chuck them after taking clones.

Agreed that true LP aero using 3/4" PVC with sprayers for each and every plant site would be "better", but I'm not sure if it would be "better" enough to justify the work/complexity involved at this point - if I could find a pump that was judicious enough with electricity usage, I'd have that waterfall in mine going 24/7 which I think would be some explosive growth (probably gonna do 20 seconds on / 3 minutes off or something like that).

Definitely gonna be a shit-ton of mods for round 2, so that's certainly one that I'll be checking out - seeing how much better the top plant (aero) does than the plants below it, if any.

Dave, certainly not my idea - there are plans for similar setups all over the Net, I've just made some mods to mine.

What's the reason for making this so complicated? Is it for the challenge or something else. I'm not trying to be a ass I'm just amazed at how far some people go to grow a little herb.
Myself I keep them soil in 1 gal pots and flood the the tray and let them wick it up.
It's simple and very productive.
no a/c no co2 no air cooled reflector, very little nutes.
Just lots of experience and some good airy soil with castings.

This what I get every 4 weeks! 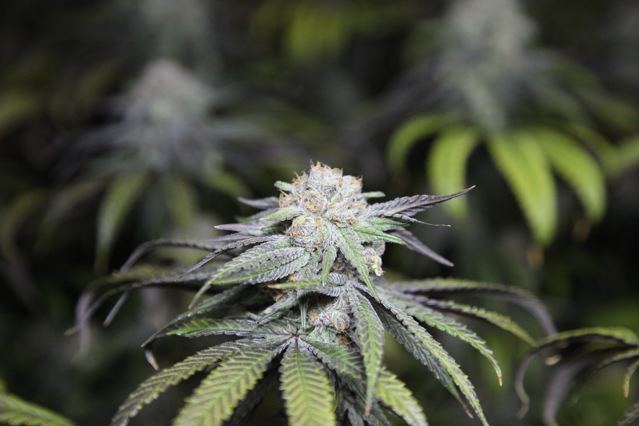 If you are truly curious about the answer, then posts #254 - 263 deal with your exact question.

Thanks Bobby....I just read the post and I wish you luck with your venture.
B

No worries, and thanks for the good vibes :)

Onto other business - just called up and the hydro store will have the Botanicare 2x4 tray LID (pre-drilled with 8 holes for 5" netpots) in stock tomorrow - after cleaning hydroton in the bathtub and once again slowing the drain to a crawl, I've decided that I'm 100% done with medium.

Mother plants (8, which keeps me at 98 plants for all but the last week of flower when I take new clones) will be in a medium-less E&F setup in 5" netpots with 5" neoprene inserts holding them up.

So, cloning, veg, and flowering are now all officially sans media :) :)

Bobby Smith said:
No worries, and thanks for the good vibes :)

Onto other business - just called up and the hydro store will have the Botanicare 2x4 tray LID (pre-drilled with 8 holes for 5" netpots) in stock tomorrow - after cleaning hydroton in the bathtub and once again slowing the drain to a crawl, I've decided that I'm 100% done with medium.

Mother plants (8, which keeps me at 98 plants for all but the last week of flower when I take new clones) will be in a medium-less E&F setup in 5" netpots with 5" neoprene inserts holding them up.

So, cloning, veg, and flowering are now all officially sans media :) :)

LOL I feel ya man. I gave up my annoying hydroton too. But I wentback to soil.. I like that I can recycle it and dry it doesn't weigh that much I also use it in my yard.... I threw out a bunch of hydroton in my yard and people kept asking what it was. They dont really notice the perlite in soil though...
Strong Mind
Steady Hand
J

i think your setinel is growing roots too man. clean up those wires... lol

Jake, check back in in a few days so you can see the new media-less E&F setup - it's the tits :) 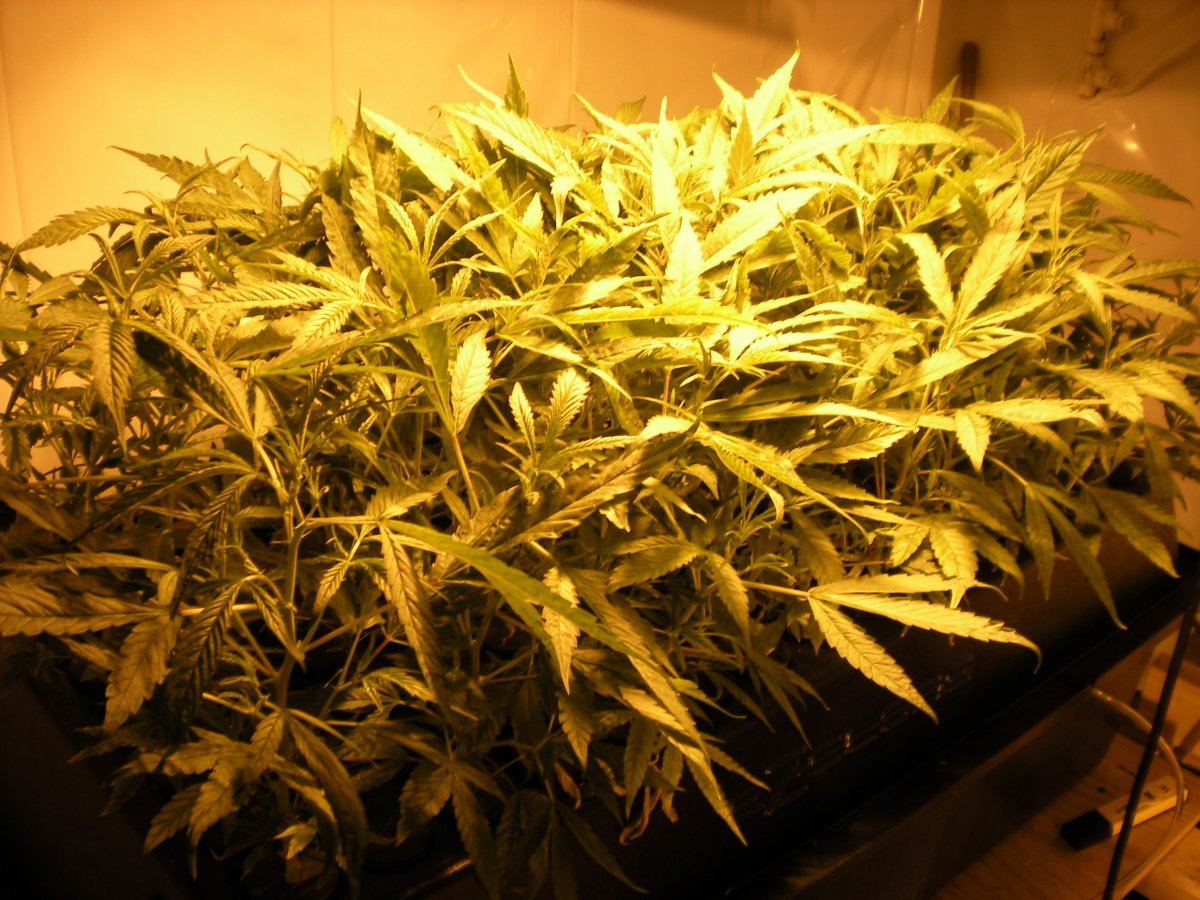 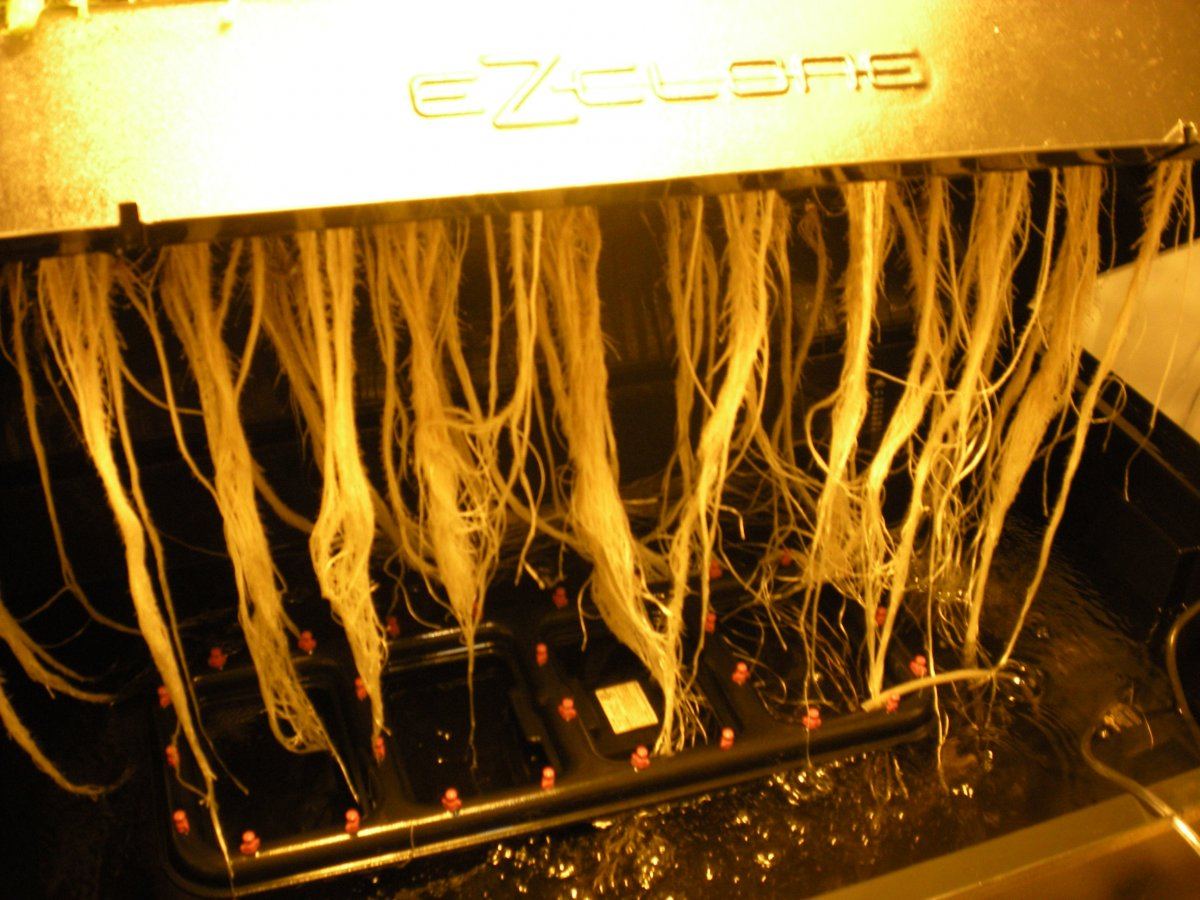 def looks like transplant time. nice root beards u got there bobbo. im just about to fire up my ezcloner and swappin out the air hose line to stones instead. ill shoot u sum pix when i get a chance.
B

Thanks for stopping in, boys - making a lot of progress (when I can) and took 120 new clones yesterday - keep yoour fingers crossed, but if all goes well I expect them to be in the system in two weeks.

In other news, would really like to run the flowering system using the 1/15HP instead of the 1/8HP chiller, so I'm testing that right now in the kitchen - ~12-13 gallons of 82F water, chiller is set for 55F - ambient room is probably about 67F, but somewhere in the 66-68F range.

If the chiller can get it to 55F, I'm confident in using it for the flowering system - just don't want a 100 watt pump running constantly, and I can power this chiller with a 396GPH Ecoplus which only uses 20 watts.

Combine that with the fact that there will only be ~17 gallons in the system at any time and when lights are on the cool coil will have 55F tap water pumped through it and I like this little chiller's chances :)

EDIT: girl has started cooking dinner (chiller/test rez setup is right next to the oven) so it's probably around 72-74F now.

Waiting for the winter classic game to start. Hockey outdoors pretty wild.
B

Went from 82 to 54 in about an hour and a half (convinced it could've cooled to 50F if I wanted it to), and had no problems staying at 55F (in a ~70F kitchen) - the BEST part I've figured out from this chiller (by reading the online manual) is that it also has a heater function (heater plugs into chiller and is controlled by the chiller's thermostat).

Instead of attaching a heater to that slot, I'm going to use a broken 633GPH pump (cracked the outlet, but I'm gonna aquarium seal it back together) I have and put a venturi on it - might as well get some extra O2 if I need to heat the water.

You'll see why I'm probably gonna need a heater when you see the new reservoir setup - it's looking pretty nice, and the whole cool coil fits into the reservoir!! :character0029:
You must log in or register to reply here.
Share:
Reddit Pinterest Tumblr WhatsApp Email Link