needshelpguy said:
Hey big cube really loves reading through your whole thread again tonight, do you think the scrog method is much better than topping and getting those big dongs? Since correct me if I'm wrong but you yielded 130+ grams more with scrog?
Click to expand...

I believe scrog gives the most yield fastest with the canadian 4 plant limit.

I cant just fill the tent with plants, cause I need to have a couple in veg while the 2 are flowering. So it limits the number if plants I can flower at any time to 2.

With 2 plants, it's almost impossible to fill a tent like you can with scrog any other way. The net makes it easy to fill every space and hold the plants up in late flower.

As for topping vrs training. If your end goal is to fill the tent I believe scrog to be faster. Since you dont have to cut anything or wait for it to recover. If I train a branch under the net, it acts like topping in that it causes other nodes to branch off vertically, but I di t lose the week or more it takes for a plant to recover from topping.

Hope that answers your question

Thanks for watching along! I love to grow me some cannabis

BigCube said:
It's good. I dont do those stupid smoke reports. It gets me high, its strong and its flavorful.

I hear ya on the reports lol you nailed it! Those are the top three important ones! Thx buddy

Ok, the next 2 are in the flower tent, first couple days of flower. First flower nutes today. 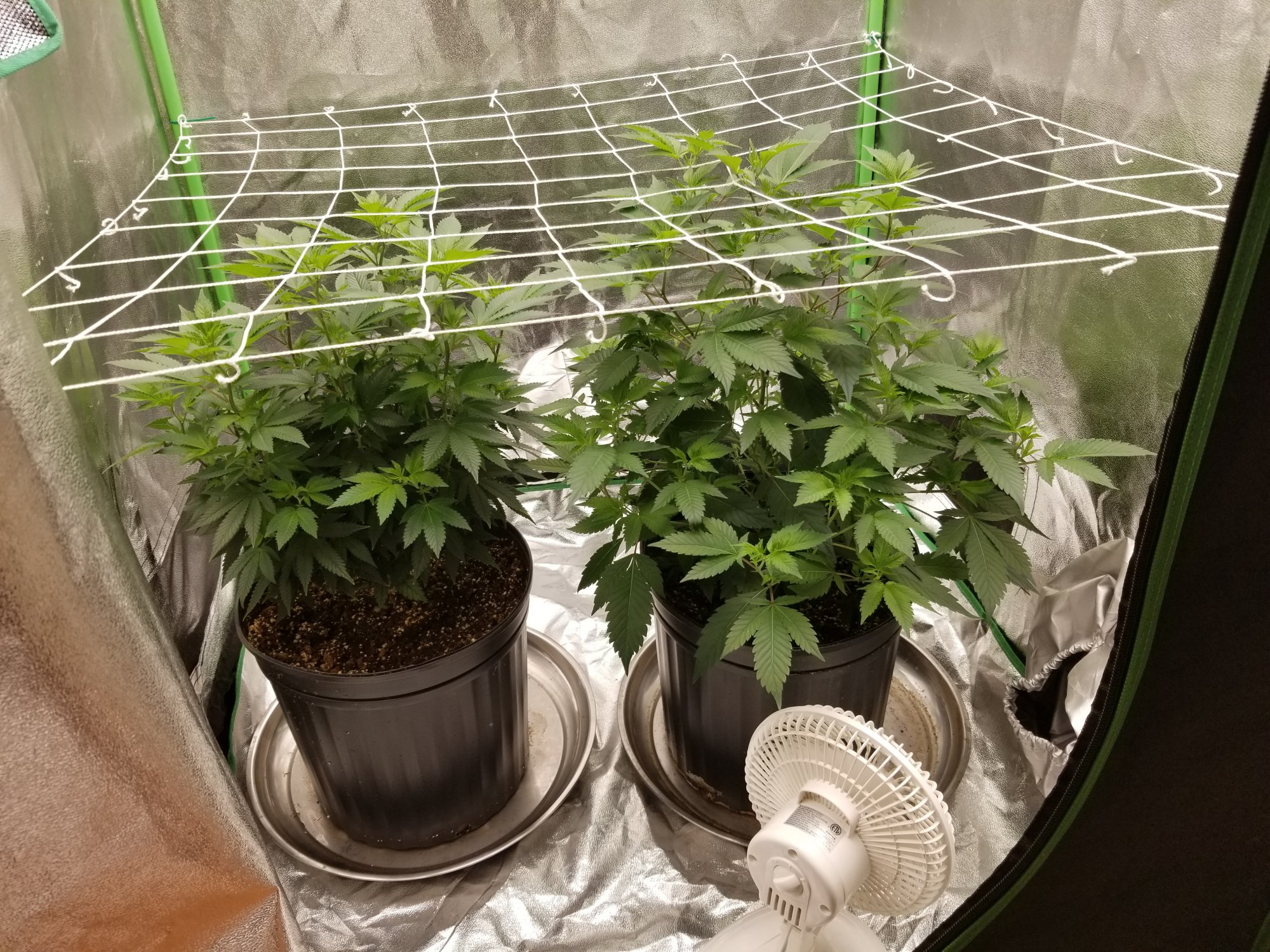 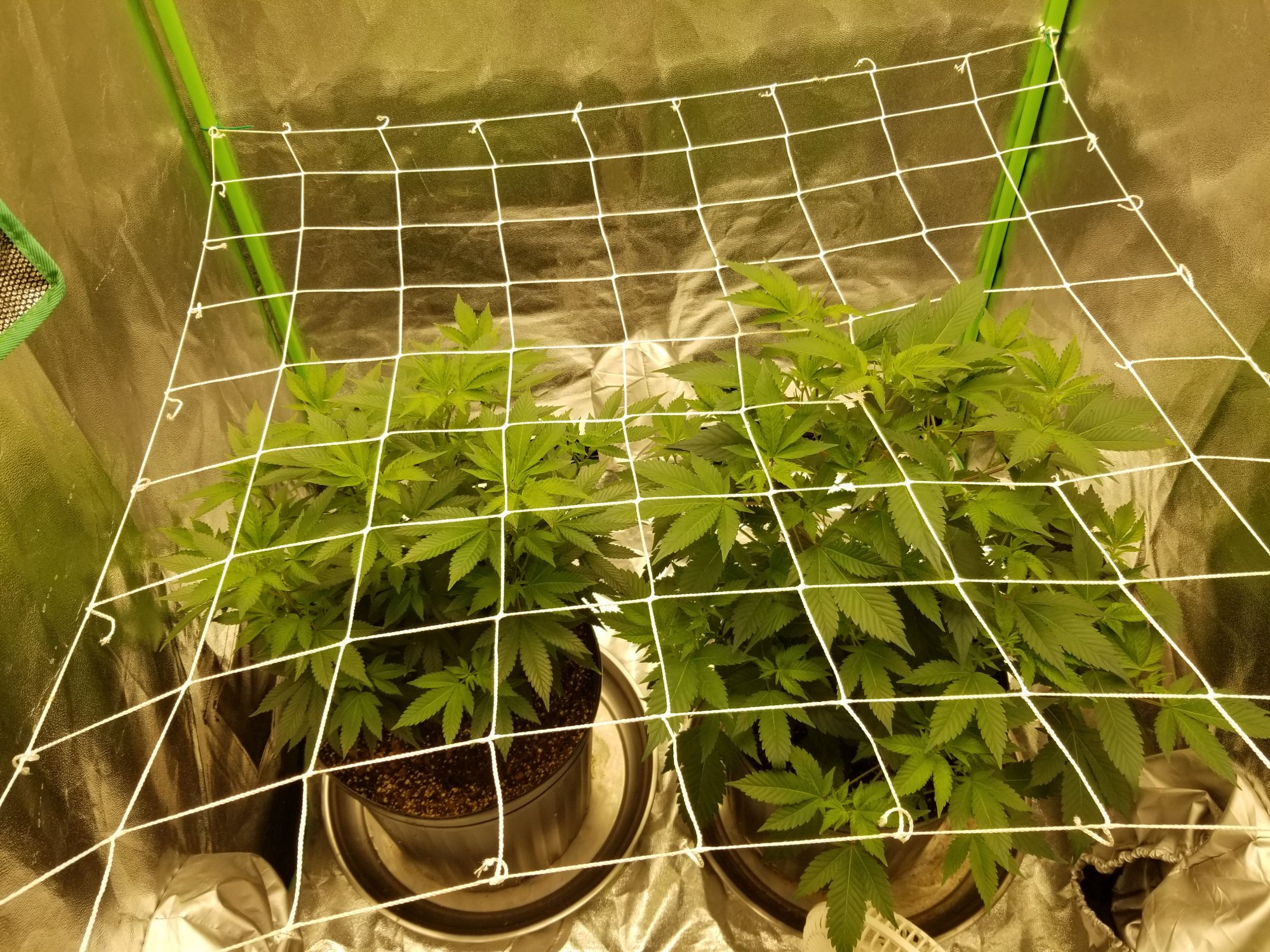 Probably not going to scrog this time. We'll see.

BigCube said:
Ok, the next 2 are in the flower tent, first couple days of flower. First flower nutes today.

Probably not going to scrog this time. We'll see.
Click to expand...

Rooke said:
Hey there nice job on the gelatos! How’s the smoke? I’ve never had the opportunity to ever smoke that strain

BigCube said:
Ok, the next 2 are in the flower tent, first couple days of flower. First flower nutes today.

Probably not going to scrog this time. We'll see.
Click to expand...

Me too man! In so happy she pulled through, I've cloned her in case she turns out to be something special. If you know the entire story of the plant, you'll know I'm very curious to see if it's what I think it is. I'm calling it retro blueberry rescue for now. Prolly always call it that

As a community here , we gotta try and rebuild the almost lost blueberry ! 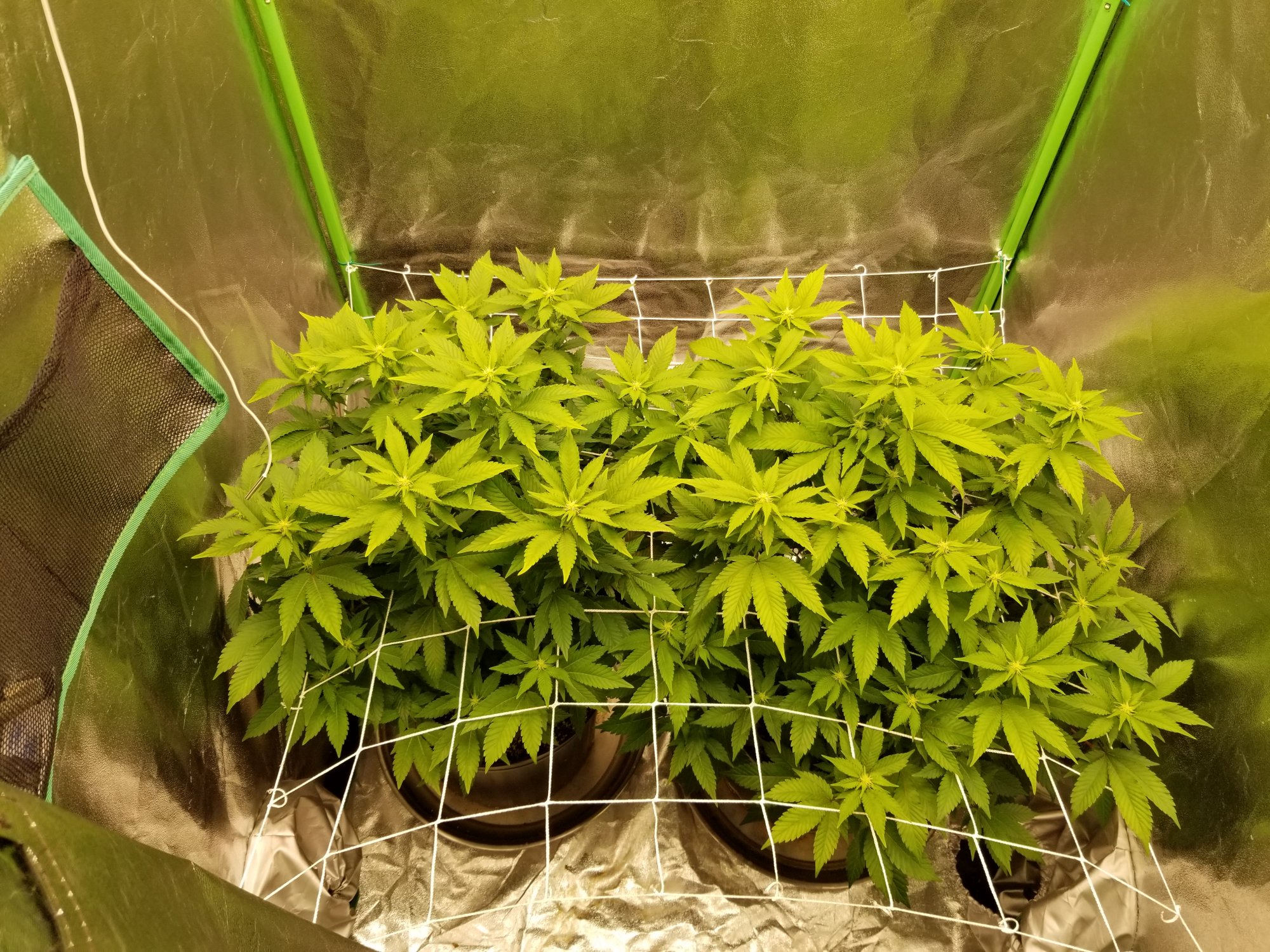 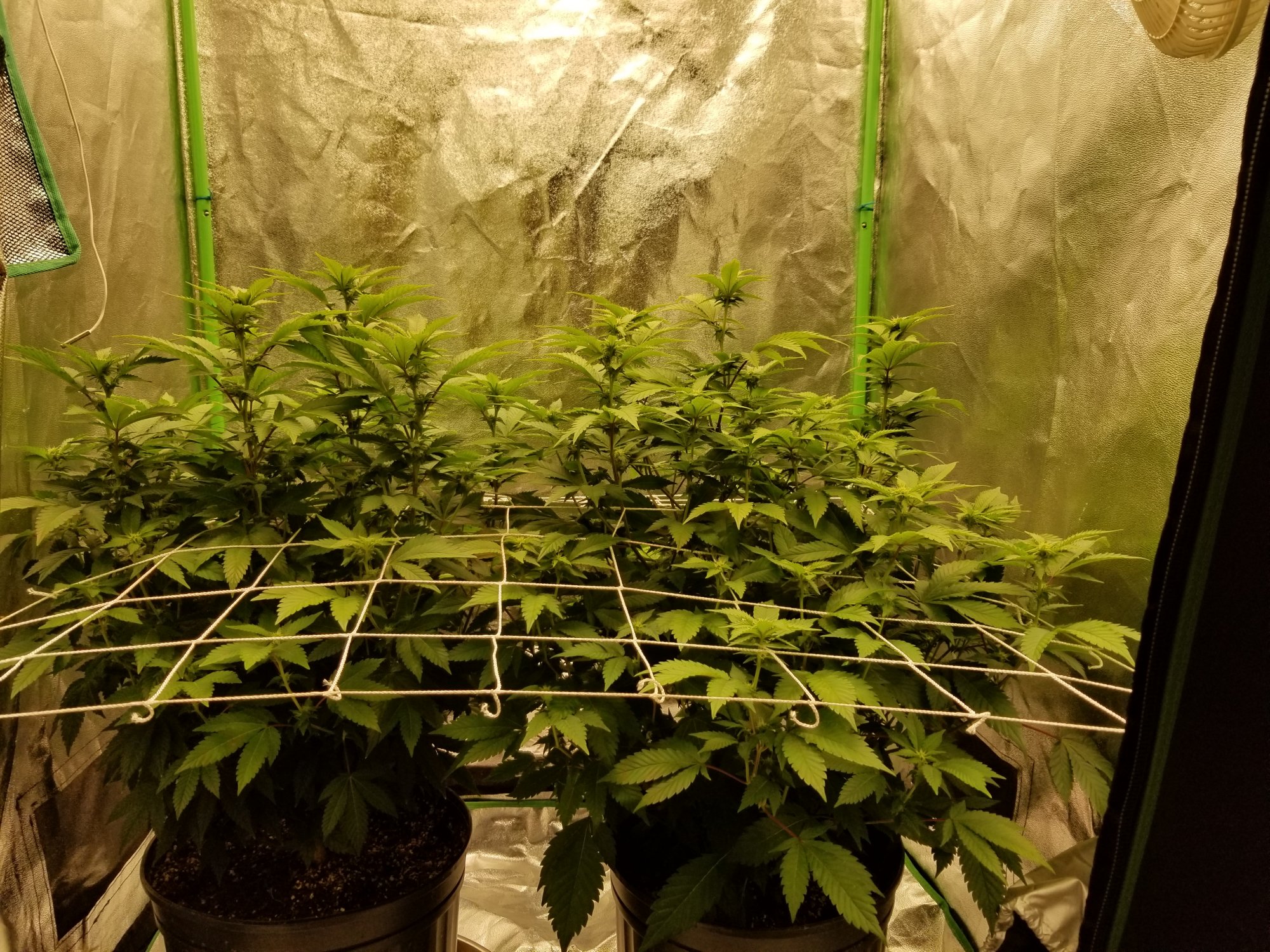 The are doing nicely, maybe next week give them a bush whacking. The left one is Gelato, the right one is the retro blueberry rescue.

Also, I've bit the bullet and bought another tent, a 2x2. I want to make a dedicated drying chamber, so I figure my veg tent doesn't need to be that big. After all, I'm only vegging 2 plants at a time max. So the 2x2 will be the new veg tent, the current 3x3 veg tent will become the drying chamber.

Yeah they do, a bit in the pics. But in person I can tell them apart. The RBR is a revegged from flower clone, and has several 1 2 and 3 finger leafs in some of the older growth. It's also a bit thinner. Like not as bushy. But they do look very similar.

For those of you who dont know the story, the plant in question is one of few seeds my dad pulled out of an old desk drawer he hadn't used in at least 10 years. I tried to sprout them and only one cracked. It turned out to be a female, I gave it back to my dad I a solo cup about 3 weeks old.

Well my dad is brutal on his plants. We are talking mold and pest city. I won't smoke any of his stuff cause I helped him trim it and saw how bad it was.
But while trimming, I was overblown by how strong a smell the "blueberry" was. And was the only plant that didn't have mold. In an effort to save it the genetics, he put it in his veg room and started revegging it.

This is when my gears started turning, that seed was a minimum of 10 years old. The smell was real strong. What if this is some old blueberry shit we used to get?

Now, I know the chances of it actually being the original blueberry are pretty much nil. But I'm more interested in getting the flavor more than a name.
So he's letting it veg, and a buddy of his gives him a couple plants. So he kicks the blueberry outside, in the winter. I was over there a day later taking cuttings. From all that comes the RBR. (Retro blueberry rescue)

This thing should have died a few times already, and in spite of all that survived.
Here it was when my dad grew it, this is back in November. 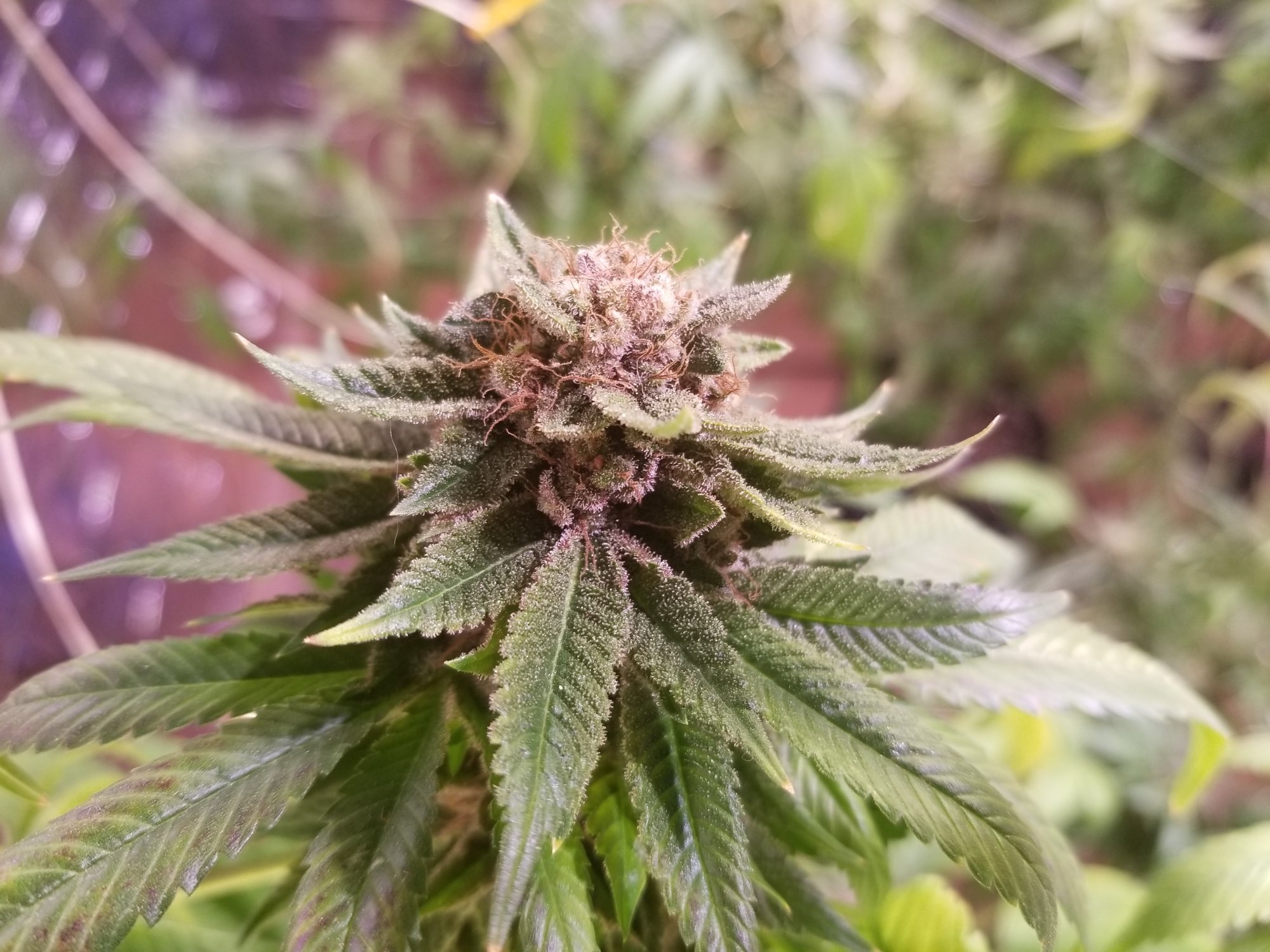 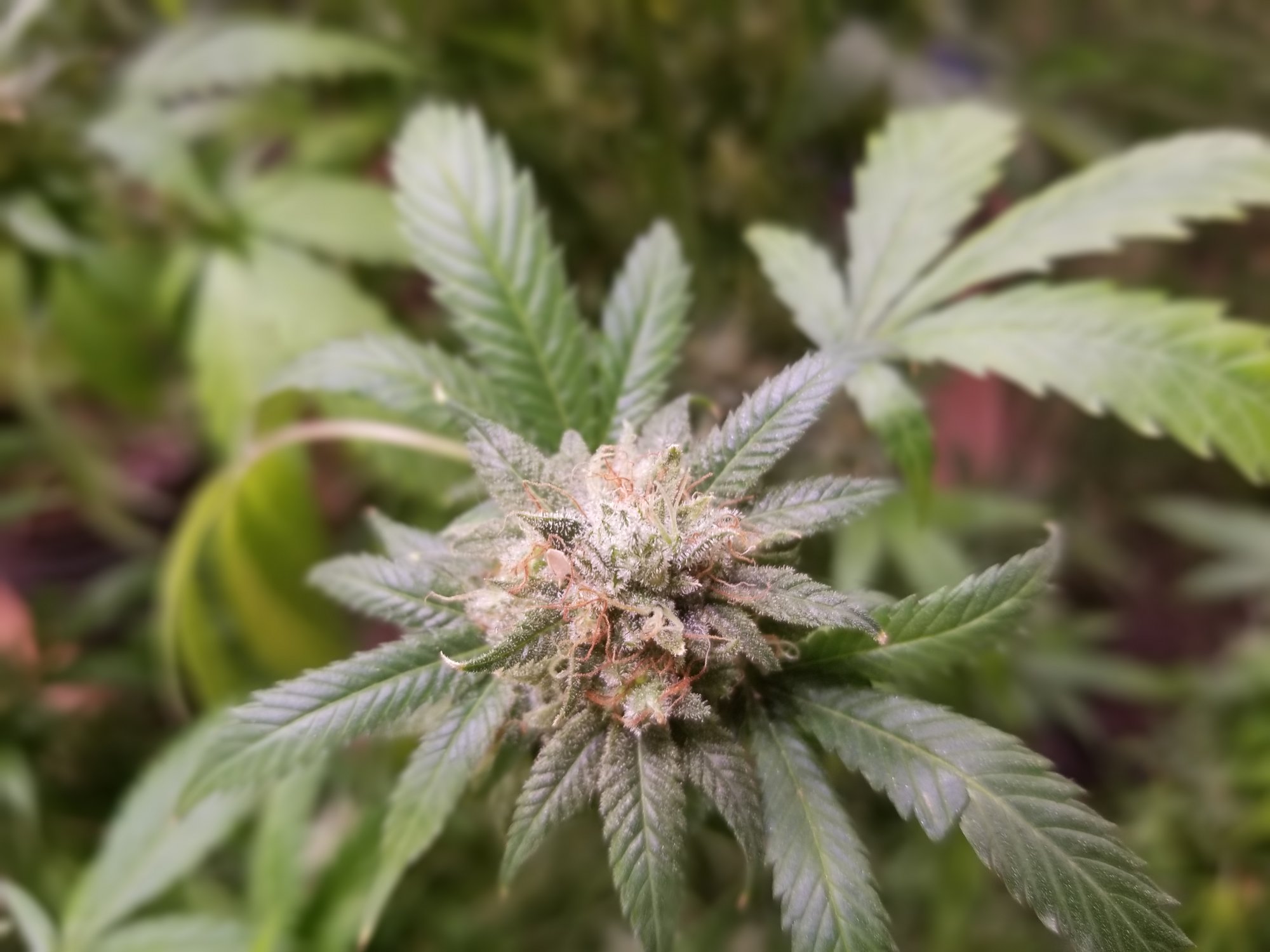 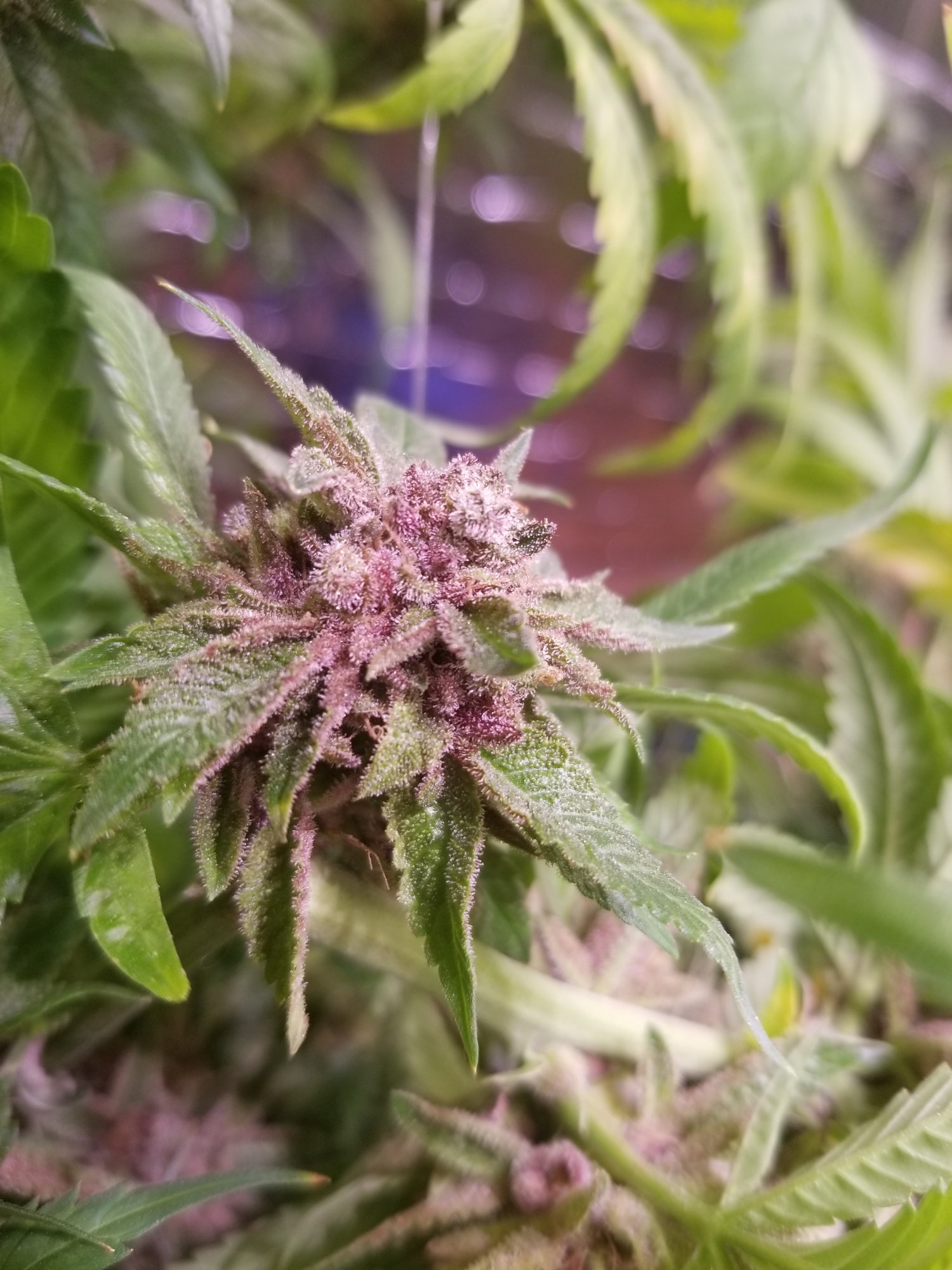 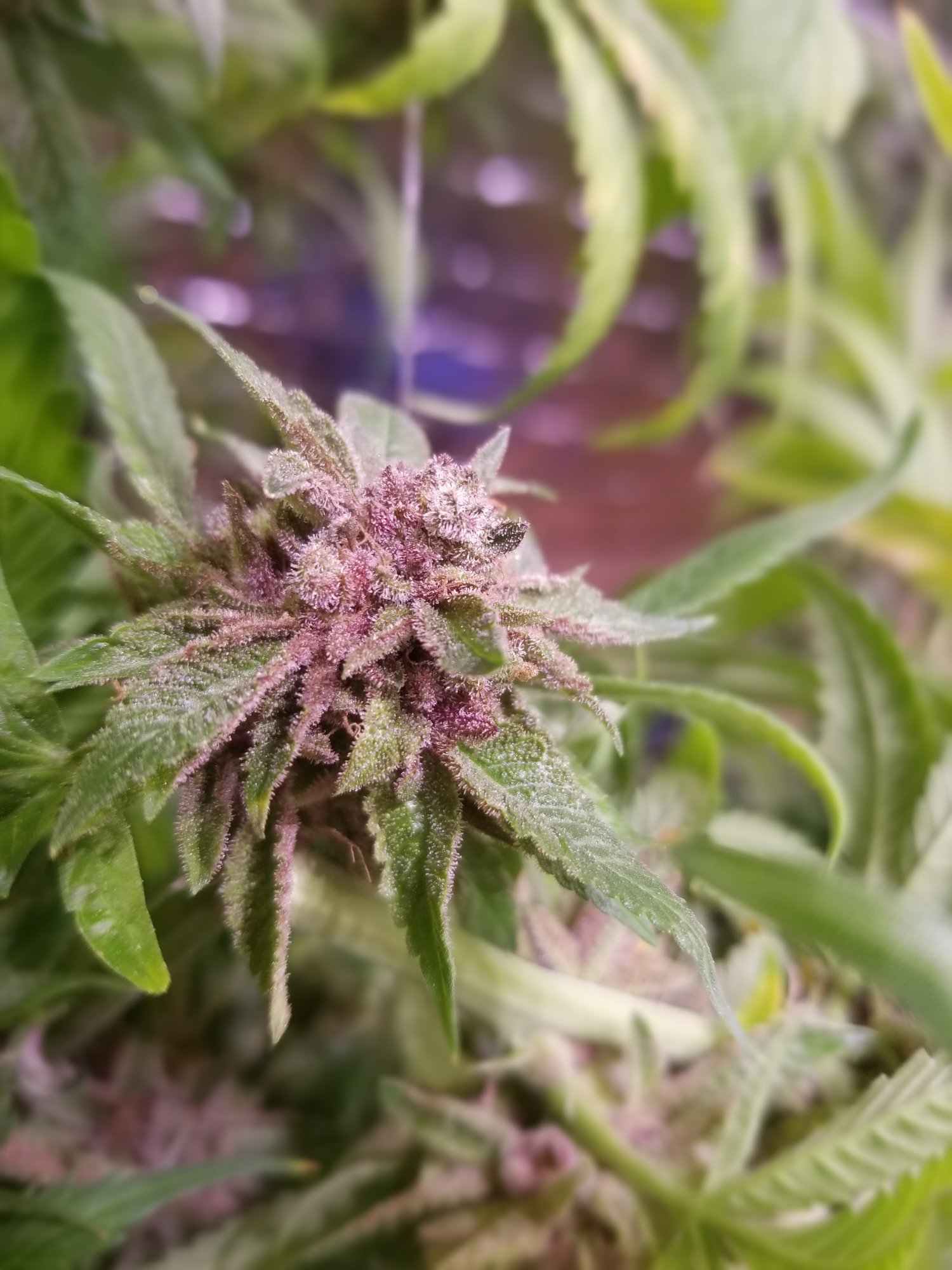 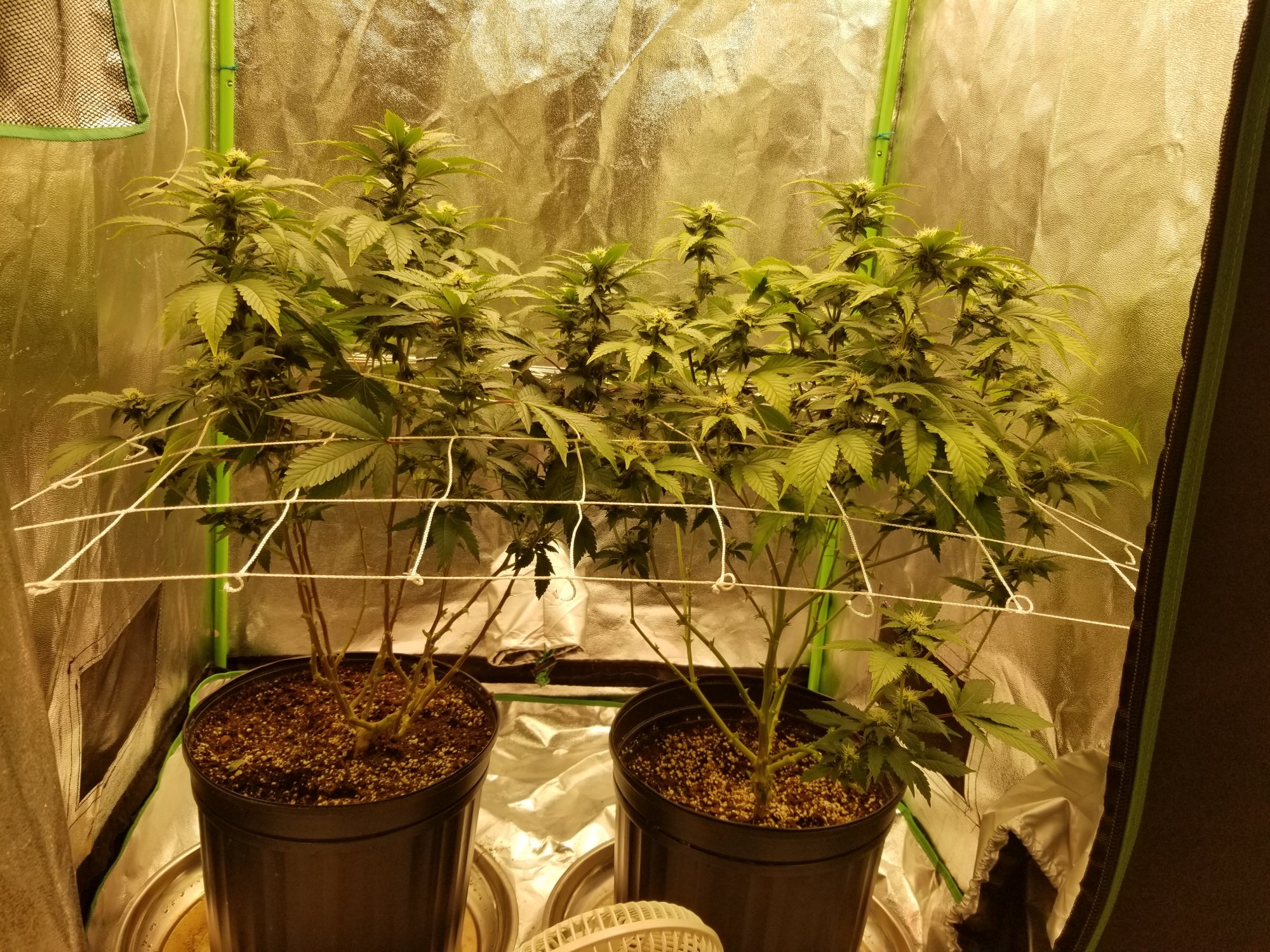 Now that they are open, you can see some differences. You can see where I trimmed the lower branches, the node spacing is not as aggressive on the RBR.

Cleaned them up a bit more. Gave the tent a good wipe down too. I'll have to put the net back up in the next week or two before the flowers get too heavy. 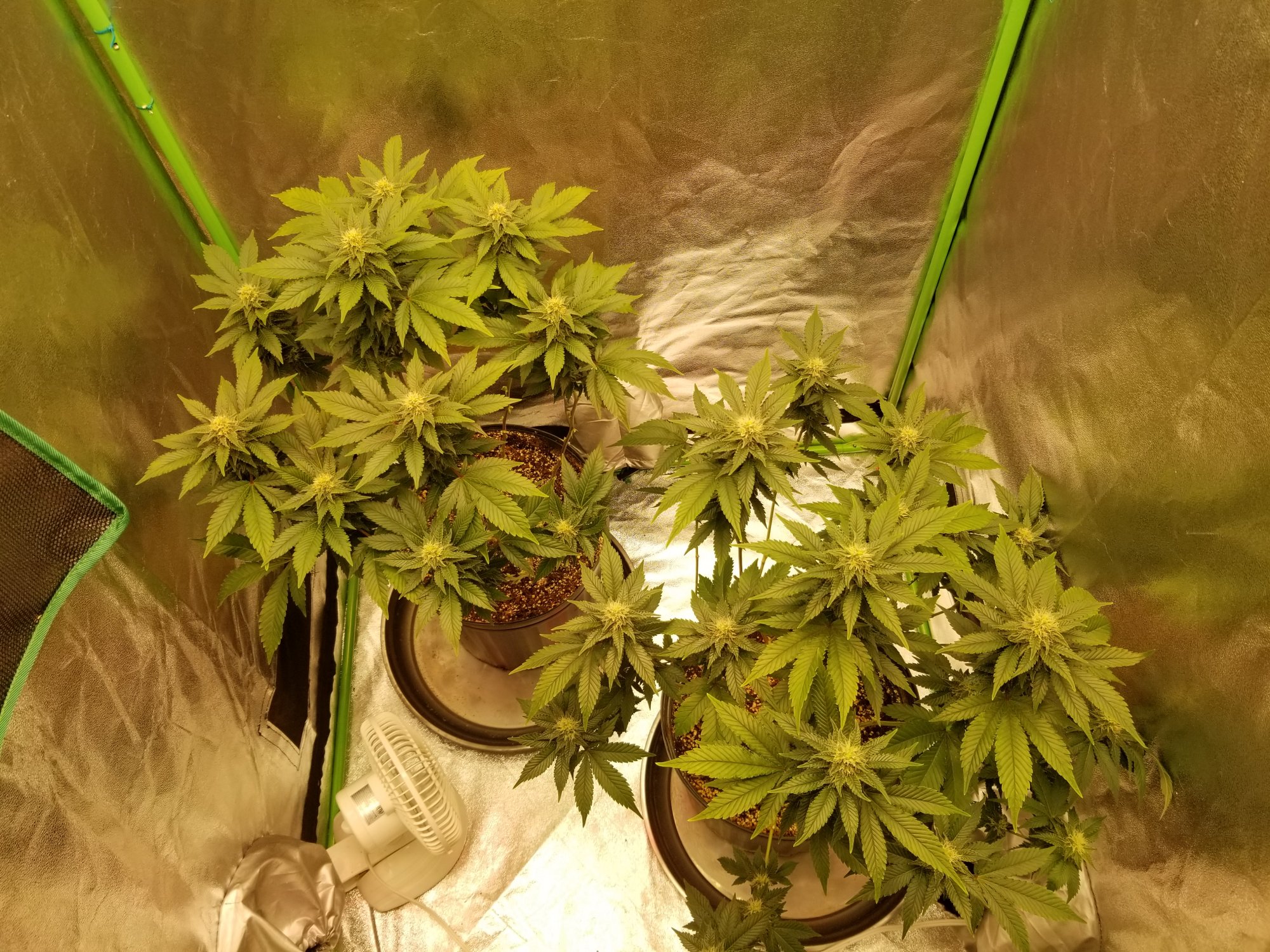 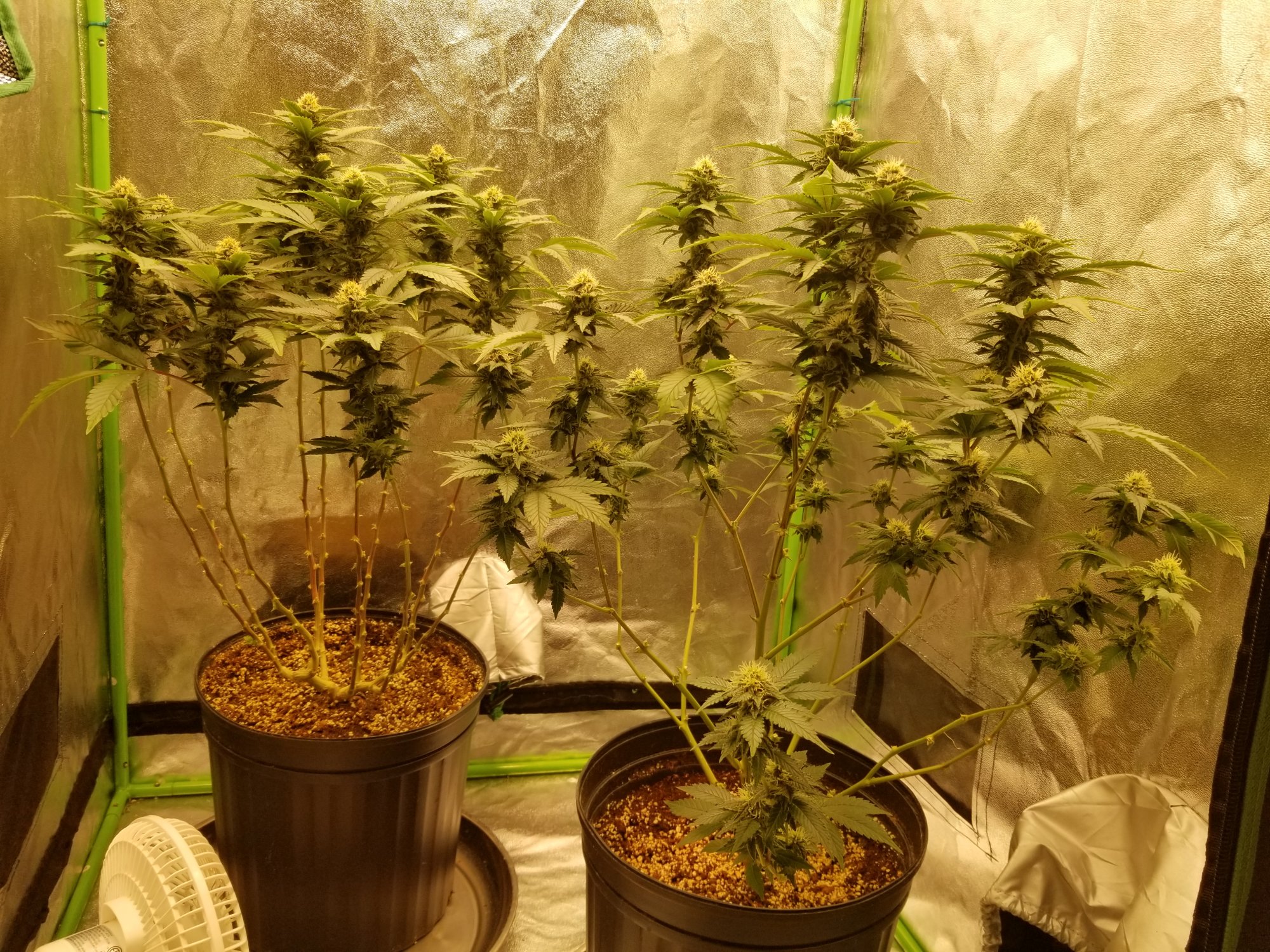 went to town on those girls!

Newber said:
went to town on those girls!

Yeah, I always take more than most would lol. It usually doesnt look as bad when its scrogged to a full net. But it's basically my go to, bottom half of the plant gets culled

Today I came home from work and found that my exhaust fan had unplugged itself. To be fair to the fan, it was my own fault. I had the plug bearing the weight of a power bar and a timer. 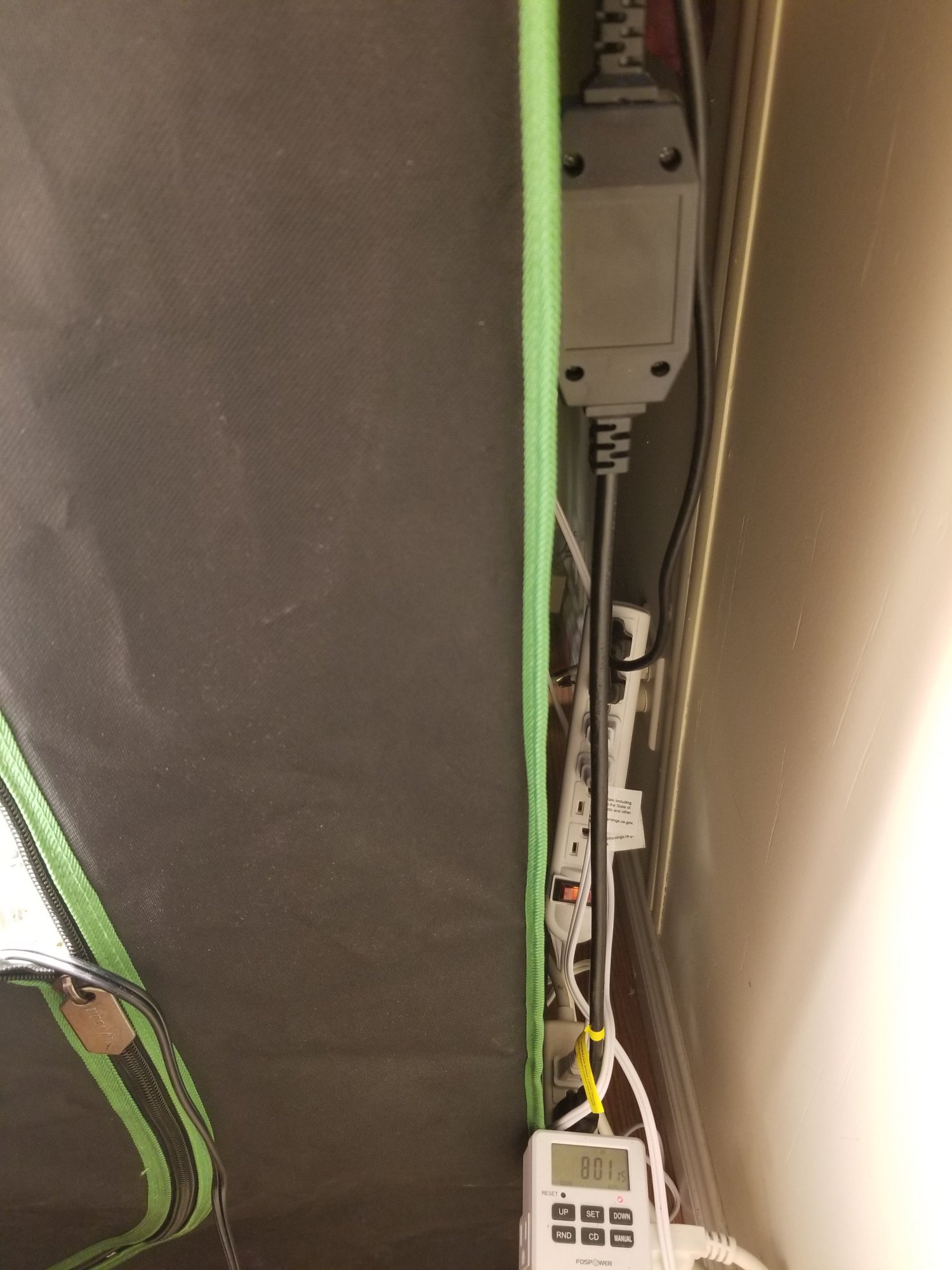 I dont know when it happened, I didn't check on things before I left for work, so it could have been like 18 hours if it happened right when I went to bed.

So I quickly opened the tent, and saw a bunch of this: 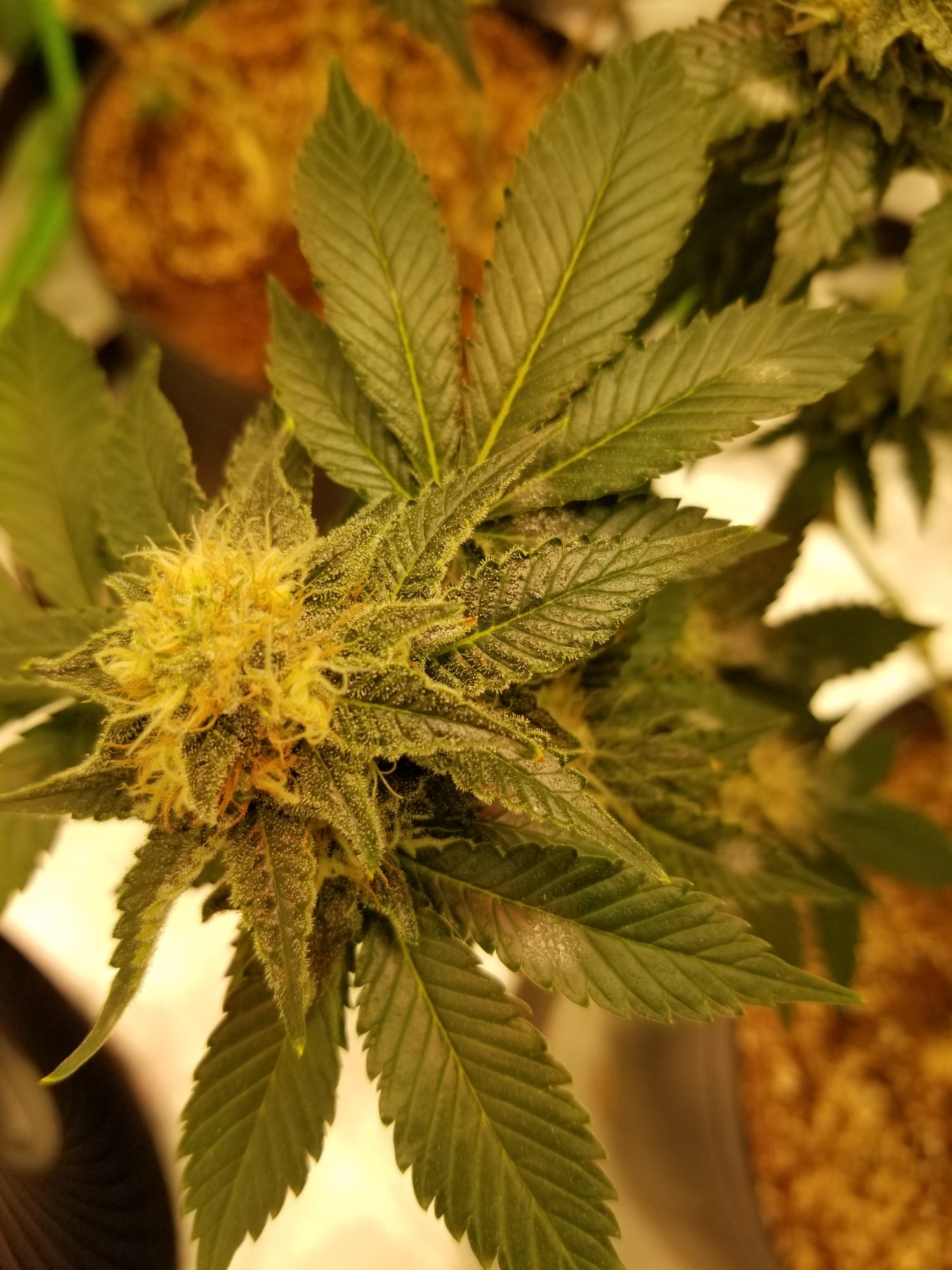 Even with a super clean environment, and low rh.

I'm not a fan of trying to "save" anything. Mold is mold and I'm not smoking it. So down they come.

Good news is, the veg tent is fine and I have clones of both plants in there. I'm going to get rid of these, clean the ever loving shit out of the tent and equipment. Then start over. Also this time, I'm going to use both tents one plant in each, so if this kind of shit happens again, I'm not fucked.

What a world. They were doing so good too!

I have had it before on some thicker colas, I just cut the offending cola of after I covered with a plastic bag to stiffle spore's.
Risky but worth a few days to make sure no further occurrences.